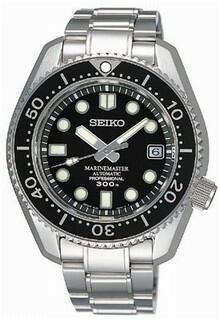 The SBDX001 Marinemaster uses the 8L35 movement, which is essentially an undecorated version of the 9S55 found in the Grand Seiko; the Marinemaster movement is also not subjected to the "Grand Seiko Standard" inspection. That being said, the Marinemaster is a very well made piece of kit and designed for serious divers.

By: SJX : January 4th, 2008-07:06
There is hardly any English language information available for Grand Seiko so I decided to put one together. I actually wrote a few words on this some years back, but never completed or published it. Since there has been substantial interest on the forum ...
login to reply

It's gratifying to see that Seiko is receiving it's fair share of attention . . .

Great reading for GS fans... and for those who are not familiar with ...

By: Horolographer : January 4th, 2008-08:50
the watches or have not seen a GS before. Thanks JX for a wonderful article. Cheers Harry
login to reply

thanks for that. i know i want one and now i know why.

By: vlim : January 4th, 2008-23:18
I really have to take a closer look at their timepieces when the opportunity arises.
login to reply

By: ei8htohms : January 5th, 2008-07:41
Hi SJX, This is a great read and will likely serve to educate many Grand Seiko newbies for years to come. Thanks! I wantred to mention though that the often repeated bit about Seiko's success at the Observatory Competitions in Geneva and Neuchatel being r...
login to reply

Some thoughts on the controversy...

By: SJX : January 5th, 2008-08:08
Hi ei8htohms, Thanks for the input. That's a good point and I do agree with it; that the discontinuation of the observatory trials due to the success of the Japanese can never be proven with any certainty, whatever is said is conjecture and personal opini...
login to reply

By: SJX : January 5th, 2008-19:20
I appreciate your comments; I look forward to your posts because they are always very informative. Like I wrote earlier, in agreement with John, whether the demise of the observatory trials is due to the quartz revolution or Japanese watches or anything e...
login to reply

By: SuitbertW : January 6th, 2008-03:57
...don't take me wrong, I'm not going to convince you or attempting to change your opinion. But I found the facts on which you obviously based this opinion a bit puzzling. As John pointed out the reference to J. Goodall's - I'm going to see where the data...
login to reply

The source I have read which somewhat addresses this

By: SteveG : January 5th, 2008-10:30
question, more in an informational rather than rhetorical fashion, is K. Seiya: At this page: www32.ocn.ne.jp .html#chrono ) "Chronometer appeal In the middle of 1960's, European Chronometer Official Association appealed that Seiko shouldn't use the name ...
login to reply

more great info, I love these watches! thanks! (nt)

Thanks JoeT, great details...please share with us more. [nt]

Thanks for a good read.

Setting the record straight - I hope

By: ticktock : January 6th, 2008-16:36
As the author of "A Journey in Time: The Remarkable Story of Seiko" which was one of the references used by SJX, it seems appropriate to post here Seiko's official description of the Spring Drive mechanism, as quoted in the press release issued at the tim...
login to reply

thanks for the additional tech details! (nt)

Excellent write up ! Thanks a lot ! [nt]