When JLC bought it in 2006, it used to be a central second version. 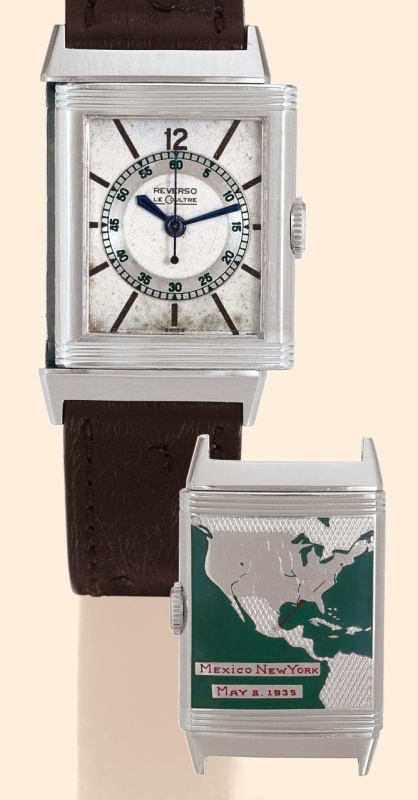 A look at Amelia Earhart's Reverso.

By: amanico : January 2nd, 2014-00:05
This is a Watch you will never see, other than at the Heritage Gallery of the JLC Manufacture, or during an " all over the world " exhibition, if you are Lucky. This Watch was made circa 1935, to celebrate Mrs Earhart's flight between Mexico and New York ...
login to reply

and the best part is

By: Ares501 - Mr Green : January 2nd, 2014-00:49
that LeCoultre is not written above seconds dial :) seriously amazing piece the back side is just mesmerizing knowing when the watch was made thank you for this slice of heaven Best Damjan
login to reply

This is a nice piece of History, indeed. BUT this can also give some ideas

By: Spellbound : January 2nd, 2014-01:04
Can you please remind JLC to issue a Tribute piece in 2015 to commemorate the 80th Anniversary of that flight. And to make the re-edition EXACTLY the same as this one ! Dean
login to reply

By: jrwong23 (aka watchthebin) : January 2nd, 2014-02:11
of such a historical timepiece. The lacqured back is amazingly done. Looks great and also not so fragile like enamel (I believe some of the JLC Reversos have enamel backs but I believe enamel will crack when users flip the Reversos too hard/quick). Thanks...
login to reply

My pleasure, Robin. Yes, this one is really superb.

A most unexpected "pilot's watch"

By: Tim_M : January 2nd, 2014-04:52
Well, I can't say I ever considered the Reverso a "pilot's watch," but it really works in this sense :-) It's as iconic of its era as Mrs. Earhart, and it *is* surprisingly readable with those standout Arabic numerals on the dial. Plus the dial, black str...
login to reply

Wow, love the engraving on the back.

Thanks for looking, Seeks.

Nice report on this unique piece

By: ocwatching : January 2nd, 2014-08:22
another piece of history and nice to know that JLC was on Earhart's wrist.. the caseback is fantastic..we have been meaning to do something to our TTR..
login to reply

By: Mike H : January 2nd, 2014-08:45
You always surprise me! Thank you so much for letting us discover such unique pieces of history, such amazingly beautiful pieces! So simple, so nice, so classical with a subtle touch of originality; simply gorgeous! Best, Mike
login to reply

Yes, my friend. I was envouted by this one, but JLC doesn't want to sell it! :)

What a fantastic dial and reverse(o)...

WOW ! - What more can one say.. A juwel and a piece of history

By: hs111 : January 2nd, 2014-09:53
.. in fact, for me, the front/ recto side is also marvellous, with this art Deco look .. Simply enjoyable ! And this one of these verso - backside always will leave us with admiration for the creator, the artist, and the person, to whose hommage this envo...
login to reply

I am not sure there was another woman pilot who received such a Reverso...

By: amanico : January 2nd, 2014-10:03
Will have to check that... But there was a Reverso dedicated to a Racing Event... Maybe here lies the confusion? Thanks for your input, my friend. Much appreciated. Best, Nicolas
login to reply

Thx for the kindness.. You were absolutely right, Nico.. I was right a bit, as well.. As..

By: hs111 : January 2nd, 2014-12:07
..another Reverso's backside depicting a flight route, but of a male aviator,which was reported and pictured by 219 ( aka Andrew H) in an excellent report about: " A Historical Watch and a Watch of History: An Appeal for the Reverso Virtual museum" on Jan...
login to reply

You have the memory of an elephant, my friend. Thanks for the picture!

Thanks for the kindness.. Feeling honored.. Elephants also "engrave" into their memory..

LOL. Well played, my friend. Very well played. Will try to take some pics of it

My pleasure. Thanks for looking.

Good question. I didn't know that. Will try to get an answer.

By: Ilja : January 3rd, 2014-05:19
Maybe they are willing to show us the movement holding part, because than there is a chance to proof it originally was born center second, but we need to see if all case parts do have matiching numbers. Too funny indeed. This message has been edited by Il...
login to reply

By: Archy : January 3rd, 2014-14:06
I don't think they "did" anything to the watch. There are clearly 2 watches - the " MEXICO NEW YORK " writing on the case-backs is quite different. I apologise if that is pointing out the obvious - I just mean that there need be no suggestion that the wat...
login to reply

By: Ilja : January 3rd, 2014-14:46
To my eye it looks more the engraving paint was repaired or renewed. ;) I'm sure Clavi can give us some more input regarding the picture he posted, since he wrote JLC bought the particular watch in 2006. How are chances to find a second example of a uniqu...
login to reply

Extract from the 2006 auction description....

By: Le Monde Edmond : January 8th, 2014-16:08
An Iconic watch, an important moment in time. What a great post of a legendary watch. I hope I get to see it in real life one day. In the meantime it has given me a couple of ideas for engraving on my Reverso from 1934 ;) Have a great 2014! Best Edmond
login to reply

Yes, that is the idea I wanted to give, too.