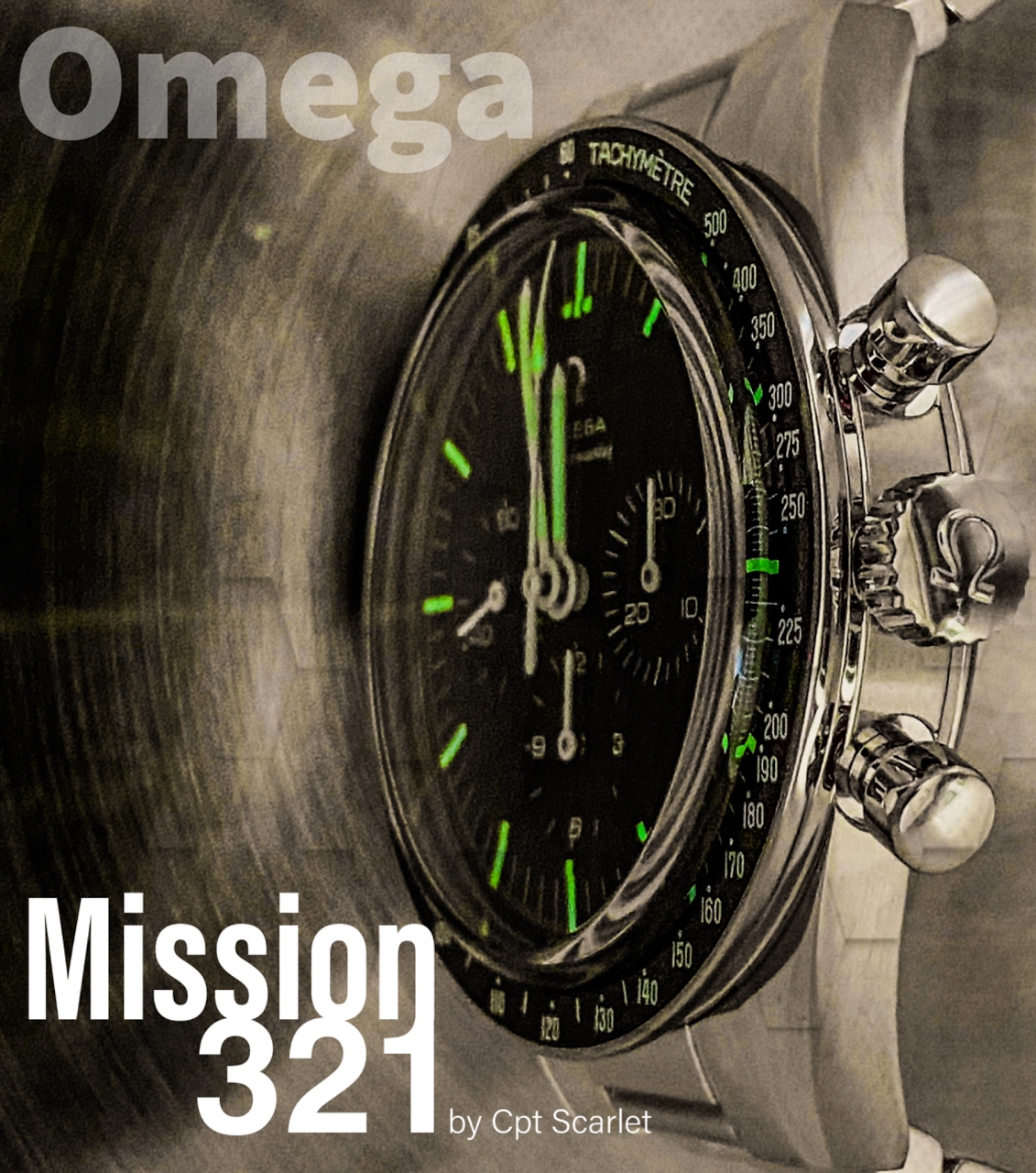 The Omega Speedmaster is a design classic and should be viewed in the same way as the Leica Camera, the Eames Chair and the Corvette Stingray. All of these iconic designs are still in production today, being made in modern factories and subtly updated to remain as relevant today as the day they were launched. Let’s take a trip back to the era where it all started and give the Speedmaster some context.

Things were very different when in 1958 The National Aeronautics and Space Administration (NASA) was established with the objective to have a distinctly civilian orientation, encouraging peaceful applications in space science. The previous year, Omega introduced the Calibre 321 into the Speedmaster and in 65 the watch was qualified for use on every one of NASA’s manned space flights a service record and status that no other watch achieved.

During the same period the Corvette Stingray C2 was introduced in 1963, reaching its ultimate specification with the fuel injected (Fuelie) version in 65. The C2 was and still is a beautiful machine that became a firm favourite amongst the Astronauts. The connection between the Stingray and the Astronauts started when Alan Shepard showed up to space training in 1959 driving his '57 Corvette. GM handed over the keys to a special 1962 Corvette in recognition of his bravery after becoming the first American in space and thus began a love affair between Astronauts and Corvettes.

By today’s standards driving a 65 Stingray feels a wonderful mechanical and analogue experience, creating one of the most memorable and exciting cars that I have had the pleasure of driving. It’s certainly far removed from the digital sports cars of today.  Although the Stingray from 65 is immensely enjoyable, it isn’t a car that I would want to subject to the rigors of everyday life, if you have any empathy for mechanical things it somehow seems cruel and slightly undignified to crawl through urban traffic avoiding the plethora of pot holes and delivery vans hustling for position, even if it does make onlookers shout and wave with excitement. 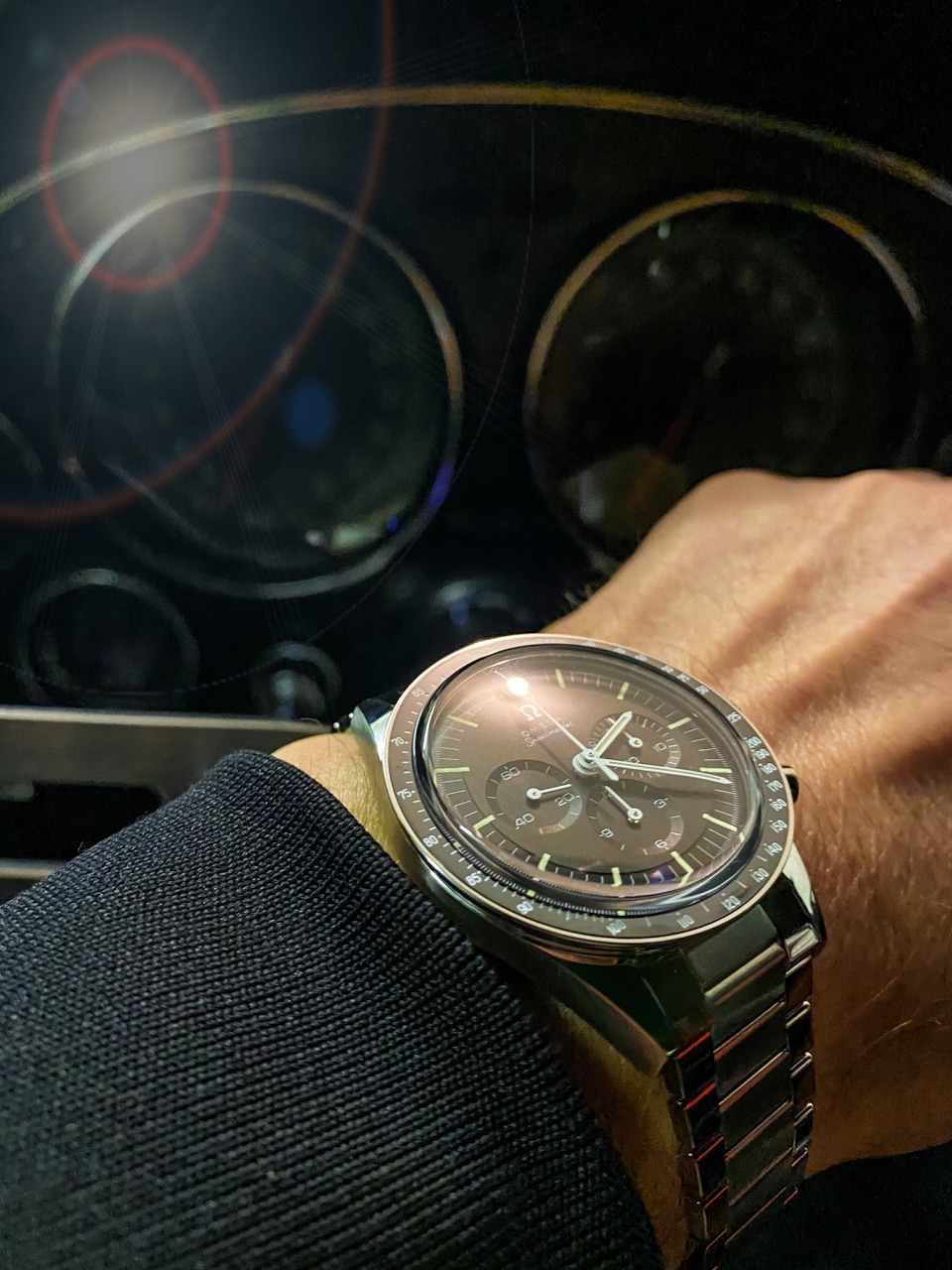 Similar empathy can be felt towards an original Ed White Speedmaster, it’s a legend of a watch that was worn by White when he piloted Gemini 4 alongside James McDivitt. On the 3rd June 65 he became the first American to walk in space lasting 23 minutes with his Speedmaster ST 105.003 strapped over is space suit. The whole experience was summed up when White famously said, 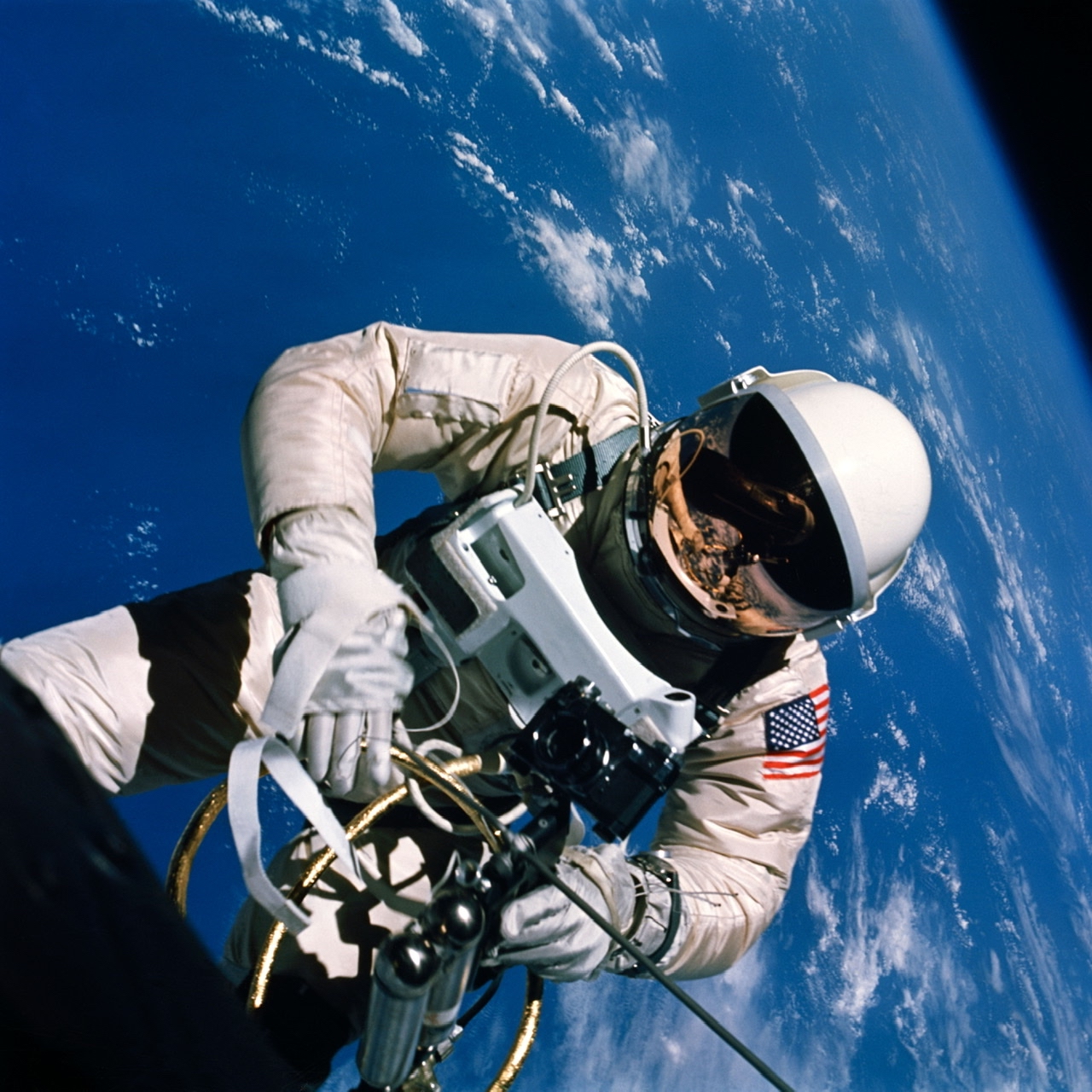 These were pioneering days for space exploration and filled with dangers at almost every point in the mission, the Gemini 4 mission was no exception and almost proved disastrous for White and McDivitt, as when White returned from the historic EVA (extravehicular activity) a mechanical problem with the hatch mechanism made it near impossible to open and to relatch. Luckily, McDivitt improvised and was able to get the door locked by using his glove to push on the gears that controlled the mechanism. If McDivitt had been unable to get the hatch latched, Gemini could not have re-entered the atmosphere with an unsealed hatch and would have resulted in a catastrophic ending.

Following on from the success of the Gemini program, Lieutenant Colonel, USAF Edward “Ed” White was selected for the Apollo 1 mission, initially designated AS-204, alongside Command Pilot Virgil "Gus" Grissom and Pilot Roger Chaffee. Launch was set for February 21, 1967. This crucial mission was the first crewed mission of the United States Apollo program and the start of the undertaking to land the first humans on the Moon. The mission was scheduled to be the first low Earth orbital test of the Apollo command and service module.

On January 27th the crew needed to carry out a “plugs-out” test of the spacecraft, involving simulating the launch procedures and a condensed countdown. The test's progress was delayed by problems with a cabin odour and poor communications between the ground stations and the crew. At 6:31pm, a fire broke out in the pure oxygen-filled cabin, killing all three men.

I visited Pad 34 at Cape Kennedy where White, Grisshom and Chaffee lost their lives on that day in January 67, it’s an incredibly powerful and humbling experience standing at the Pad that now serves as a memorial to the crew of Apollo 1. A plaque affixed to the structure bears the inscription:

“They gave their lives in service to their country in the ongoing exploration of humankind's final frontier. Remember them not for how they died but for those ideals for which they lived”. 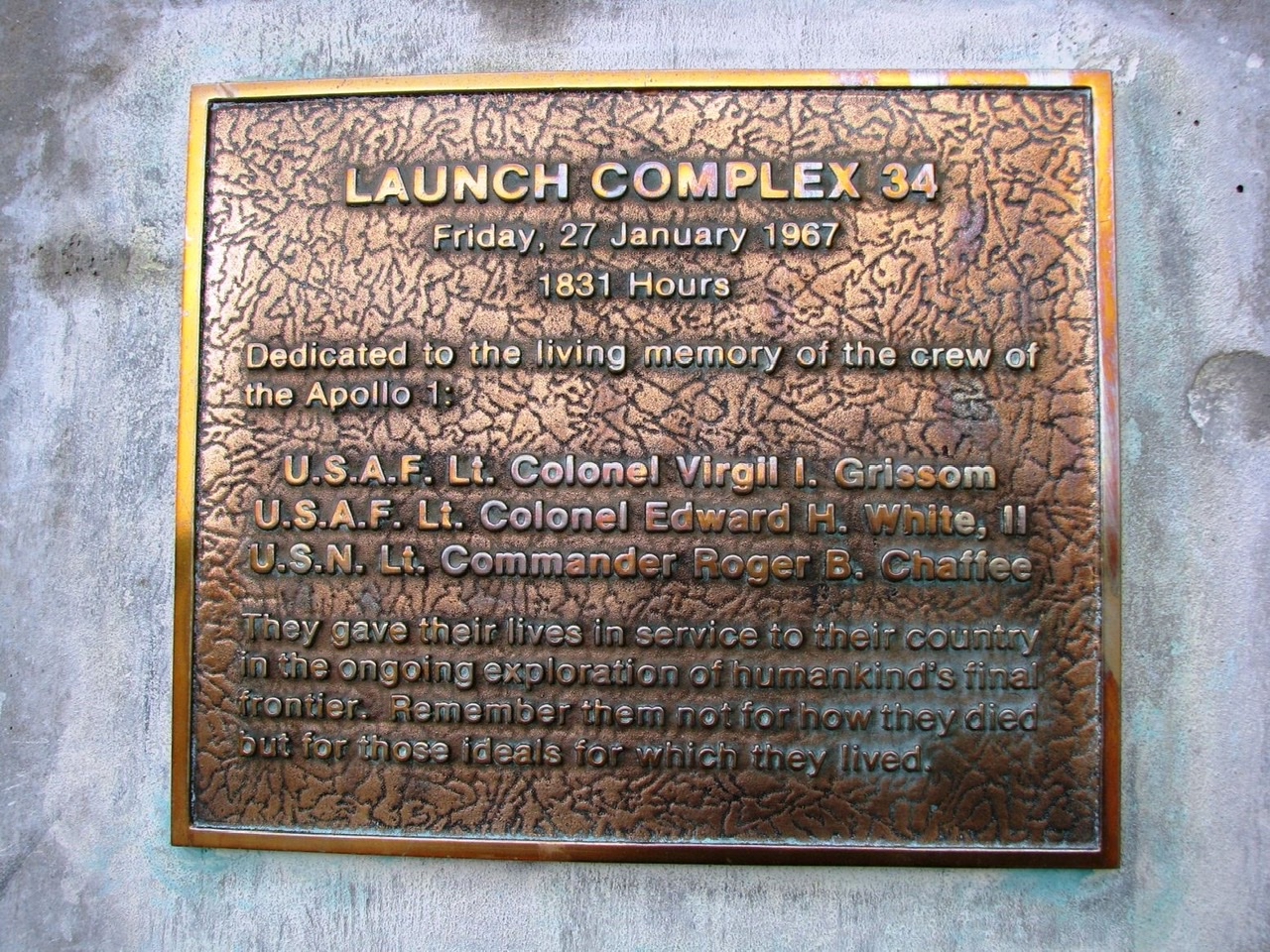 When Omega made the decision to bring the Calibre 321 back into production, they assembled a team at the Omega head-quarters in Bienne. The process took over two years to research and re-engineer the movement. As part of the research and development, the team used “tomography” digital scanning to see inside the Speedmaster ST 105.003 timepiece that astronaut Eugene “Gene” Cernan wore on the moon during the Apollo 17 mission in 1972. His Speedmaster is kept at the OMEGA Museum in Bienne.

When it came to the new Ed White Speedmaster, Ref: 311.30.40.30.01.001,  great care and respect for the original watch with its straight lug case was the overriding objective for the team and to re-create and subtly update elements this design classic. Each watch assembled is the responsibility of an individual watchmaker and this gives an indication of how important Omega view this project. The 321 movements are being split between two Speedmaster references being first issued in a Moonwatch in platinum. Although the Ed White Speedmaster is not a limited edition watch in the same way that amongst others, the Rolex Daytona isn’t a limited edition, this watch is likely to remain relatively scarce. I have reliably been told that the watch has significant orders already on the books. 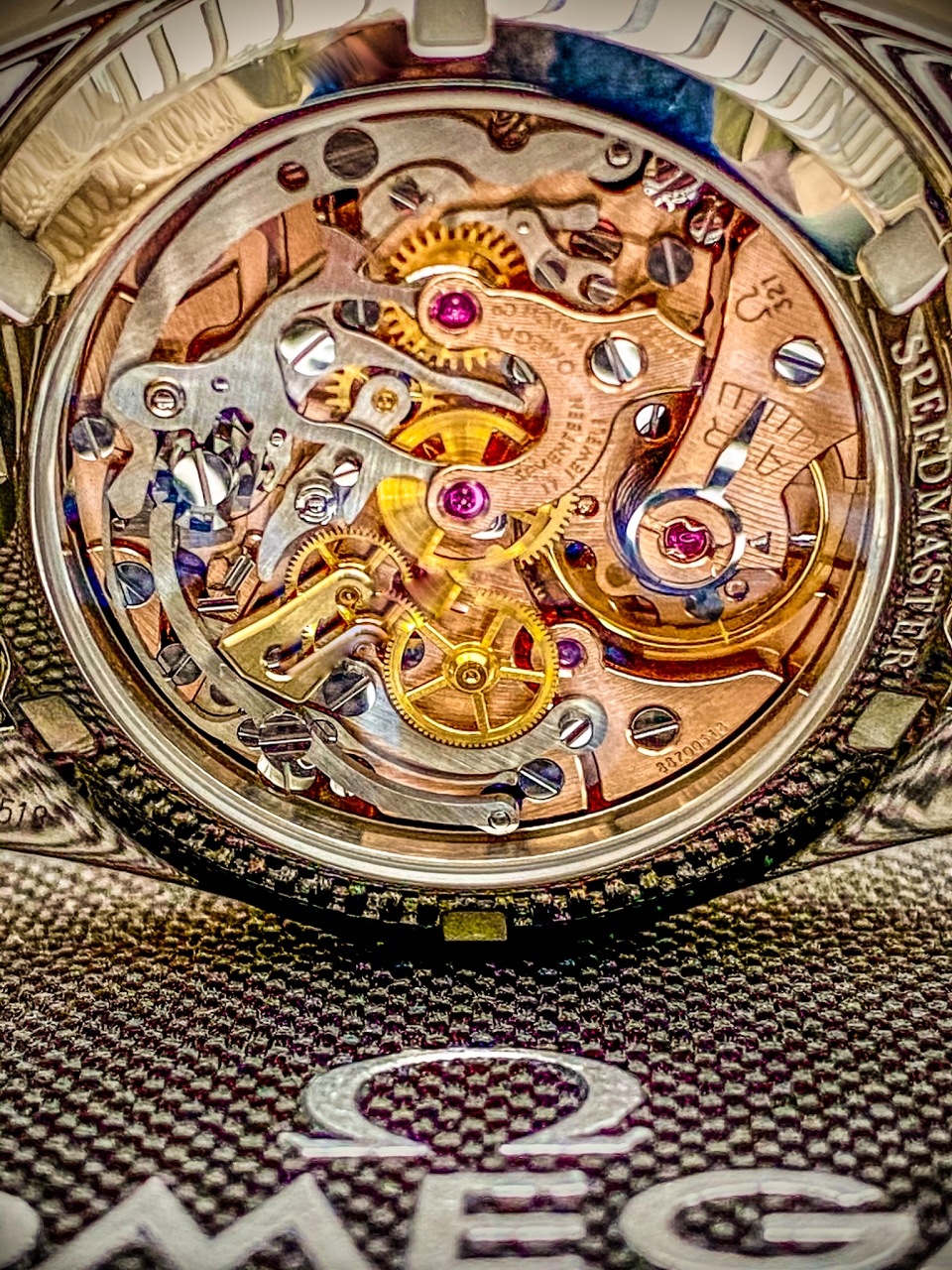 Important details including the “Dot Over Ninety” bezel ring now in polished black ceramic [ZrO2] with a tachymeter scale in white enamel, look good as does the purposeful and authentic black step dial with lume that is perfectly judged and executed. Vintage style Omega logos on the dial and crown consolidate the detail and the view of the 321 movement within the 39.70 mm stainless steel case is a visually stunning sign-off. 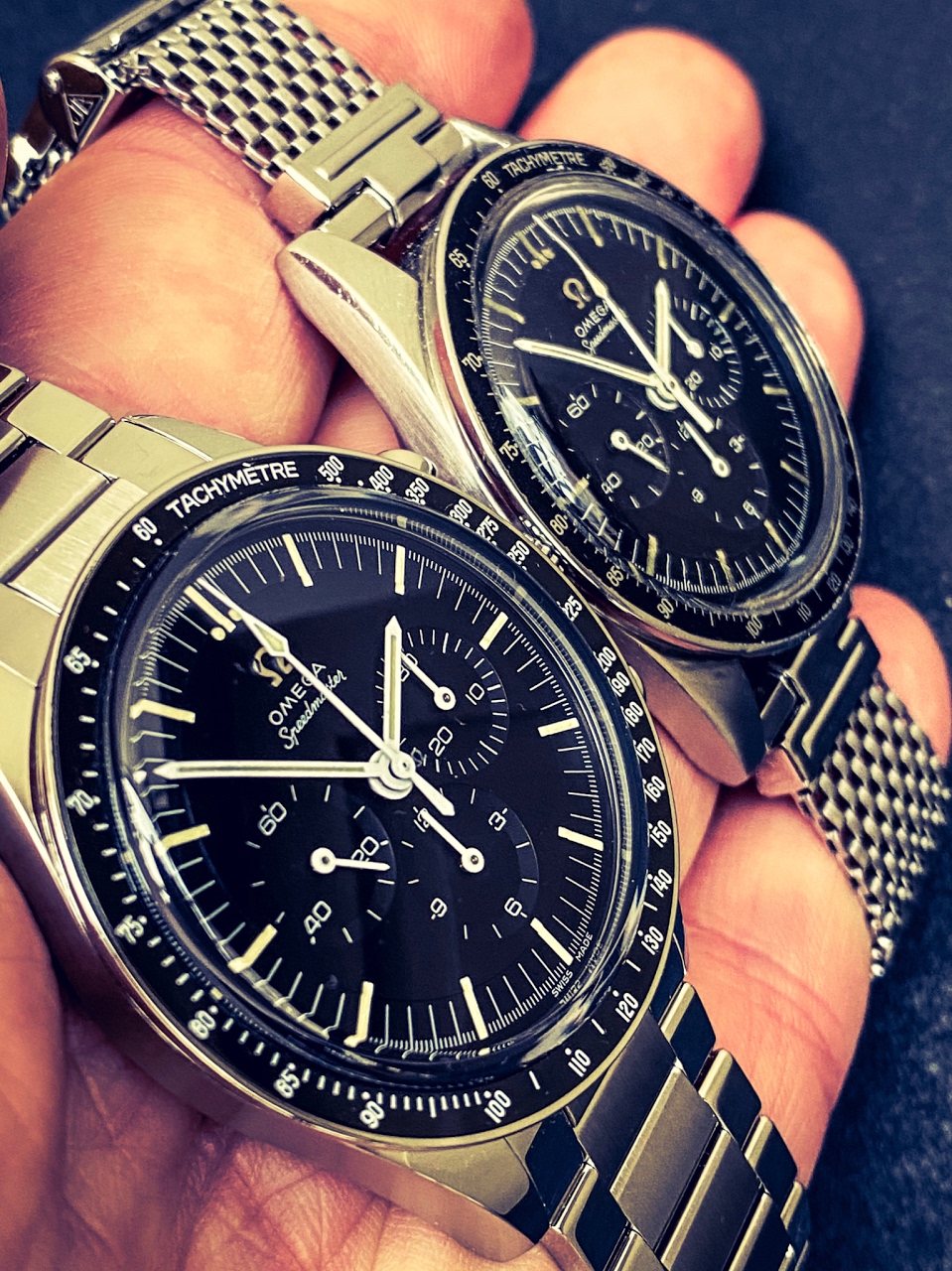 Ed White was an incredibly brave human being and a hero of the race to conquer space that ultimately put men on the moon. That is why I am proud to have the new Ed White Speedmaster alongside my original ST 105.003, we can enjoy the Ed White Speedmaster without the guilt of potentially harming a valuable and original example in daily use.

By: Cpt Scarlet : October 21st, 2020-09:28
The Omega Speedmaster is a design classic and should be viewed in the same way as the Leica Camera, the Eames Chair and the Corvette Stingray. All of these iconic designs are still in production today, being made in modern factories and subtly updated to ...
login to reply

By: Seeks : October 21st, 2020-09:58
Awesome first photo to kick start this well researched article. You are indeed a space buff. I read with great interest about your visit to Pad 34 at Cape Kennedy and the memorial to the crew of Apollo 1. NETFLIX has a documentary called "Mission Control:...
login to reply

By: Cpt Scarlet : October 21st, 2020-10:16
I would recommend a visit to “The Cape” it’s a great and humbling experience. The new EW remains very faithful to the original barring in mind that as the bezel fades on the original it makes the watch look slightly smaller. This is an illusion as the wat...
login to reply

Thank you my friend for sharing this detail!

Well deserved! I can’t imagine a better homage for Ed White and a milestone like the 105.003. Thanks Captain! Best, massi [nt]

Thanks a lot Captain, a beautifully written post on a most interesting topic! Promoted to "Editors Picks" :-) [nt]

Omega is really top at their game of remaking...

By: Clueless_Collector : October 21st, 2020-13:51
And it’s good for modern time piece collectors like me. Congrats on your new 321. I wonder which one you will be wearing more often?
login to reply

Amazing post Capt. I got a bit teary-eyed reading through it as I reminisced about history and what happened during these events...

By: holdemchamp1225 : October 21st, 2020-14:04
You said it perfectly and I totally agree about not wanting to damage an original Ed White due to it's importance to me. I already damaged the bezel and bracelet of one of mine on a trail while mountain biking which is why I decided not to wear them as mu...
login to reply

Thank you for sharing your thoughts ...

By: Cpt Scarlet : October 21st, 2020-15:07
and kind words. We need to protect the remaining original Ed White watches still out there. Best regards The Captain
login to reply

By: Horo_Traveler : October 21st, 2020-22:44
I now have a new found admiration and appreciation for my recently purchased 321.
login to reply

I’m pleased that you enjoyed it ...

No, I have had a few over the years.

Thank you for sharing your Ed White with us ....

By: winther502 : October 22nd, 2020-05:31
Early on in my collecting I naturally became aware of the Speedmaster and bought this one from a fellow collector in Denmark, as the opportunity arose. At that time I did not know about DON, pre-moon ect.. Apart from the DON detail, I guess I luck out wit...
login to reply

This is a most interesting and enjoyable post dear Captain. Not only an introduction to the new "Ed White" model recently launched by Omega but also a great Homage to Astronaut White...

By: Subexplorer : November 6th, 2020-09:31
... and his comrades who lost their lives in such a terrible accident. It´s so moving to read the plaque at Pad 34 telling us not to remember the way they died buy the ideals they lived for. Though I would rather like to have less age than I presently hav...
login to reply

I completely agree with your sentiment ...

By: Cpt Scarlet : November 6th, 2020-09:53
Thank you for sharing your thoughts on this subject. I know that you have a lifetime of experience that we can all benefit from. A visit to Pad 34 is certainly a humbling experience and I would encourage others to make this trip when they can. The photos ...
login to reply

Thank you so much for your kind comments dear Captain. Always a pleasure to share my memories of my young days which I regret are so far now.

By: Subexplorer : November 6th, 2020-10:12
I had the nice opportunity to visit Cape Kennedy in October 2016 but regrettably it was just a couple of days after Hurricane Matthew had passed through the area so all visits to launch areas were closed. I only could visit the central part of the display...
login to reply

By: Cpt Scarlet : November 6th, 2020-10:21
I look forward to your company on a visit to “The Cape”. We should also go to the Astronauts Hall of Fame, near by and a good restaurant that the Astronauts used regularly.
login to reply

That would be formidable dear Captain! Your visit plan sounds wonderful! [nt]