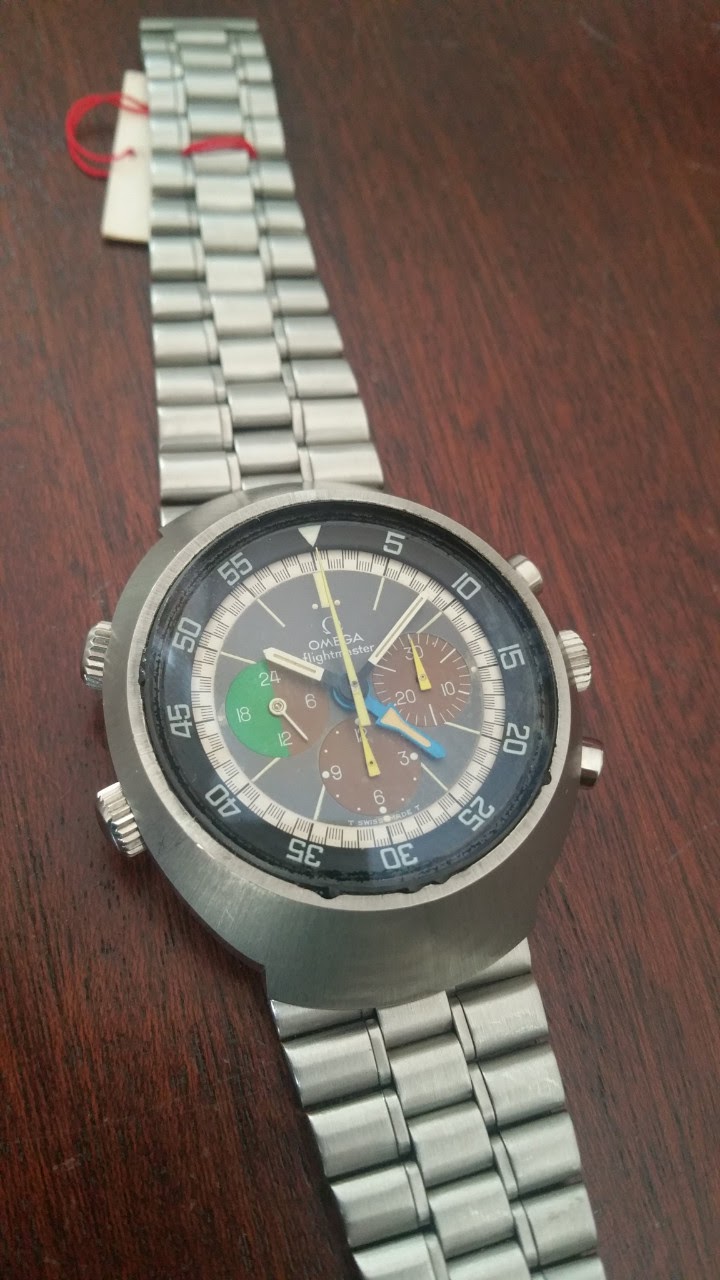 . . . that was described as New Old Stock.  I realized it had been tended by a watchmaker as the yellow coating around the chrono seconds hand pivot had flaked off (evident in the pic), but the seller was recommended by a trusted friend, and the watch appeared otherwise untouched.  The crystal gasket had melted, presumably due to sitting in a dealer's window, but the watch was described as running and fully functional.
Abel was hesitant as he resides in Argentina, where packages are known to disappear.   I volunteered to receive the Flightmaster on his behalf and relay it when he visits Florida later this year.  So the deal was done.
After considerable effort*, the FedEx delivery arrived.  Unpacking revealed a perfect specimen, other than the melted gasket which had to be cleaned and replaced.  Unfortunately, Abel had just lost his watchmaker of long standing, so after considerable discussion, he decided to take advantage of my watchmaker's services to have the Flightmaster restored.  The movement was actually in excellent shape judging by the timing results, but since it was fifty years old, it made sense to service it since it would be in Abel's collection for the long term.
A problem cropped up immediately.
Remember the missing yellow paint surrounding the chrono pivot?  The watchmaker who previously disassembled the watch had not only damaged the coating - he had re-inserted it in a cocked position.  It was impossible to remove in one piece.
:-(
So we had to find a replacement cadmium yellow chrono sweep seconds.  Just a few years ago, I'd have been able to source one fairly easily.  When I searched a few months ago, the supply of original Flightmaster 910 parts had essentially dried up.  There's practically nothing available on the internet.  None of my usual suppliers had parts, either.  Fortunately (or so I thought at the time), there was one eBay supplier of yellow chrono hands in New Zealand.  Faster than you can say Speedmaster, I ordered one.
It turned out to be an aftermarket part, brighter than an original.  In this photo, you can see the original broken chrono sweep seconds. 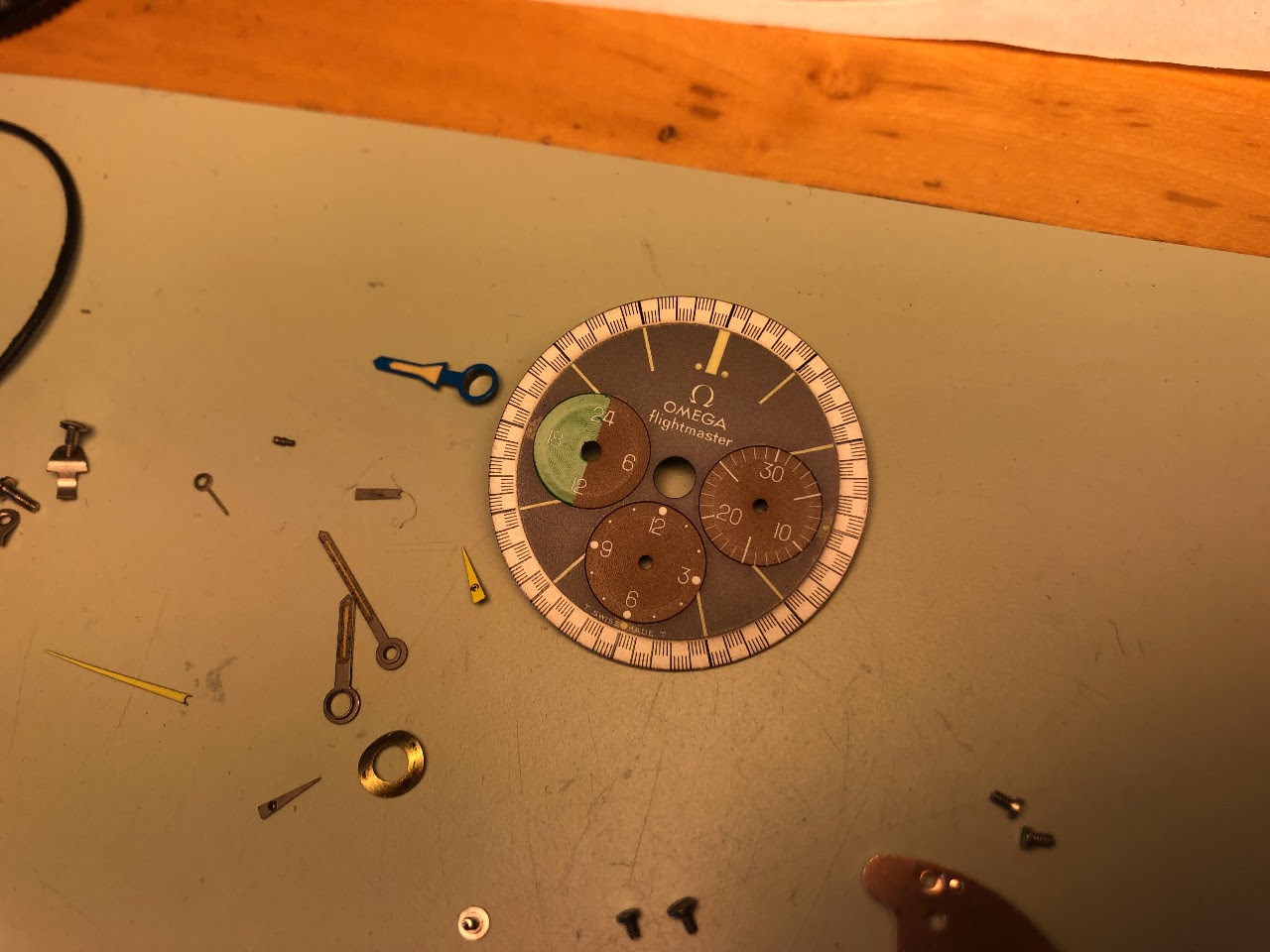 Here's the seconds hand that came from the other side of the world. 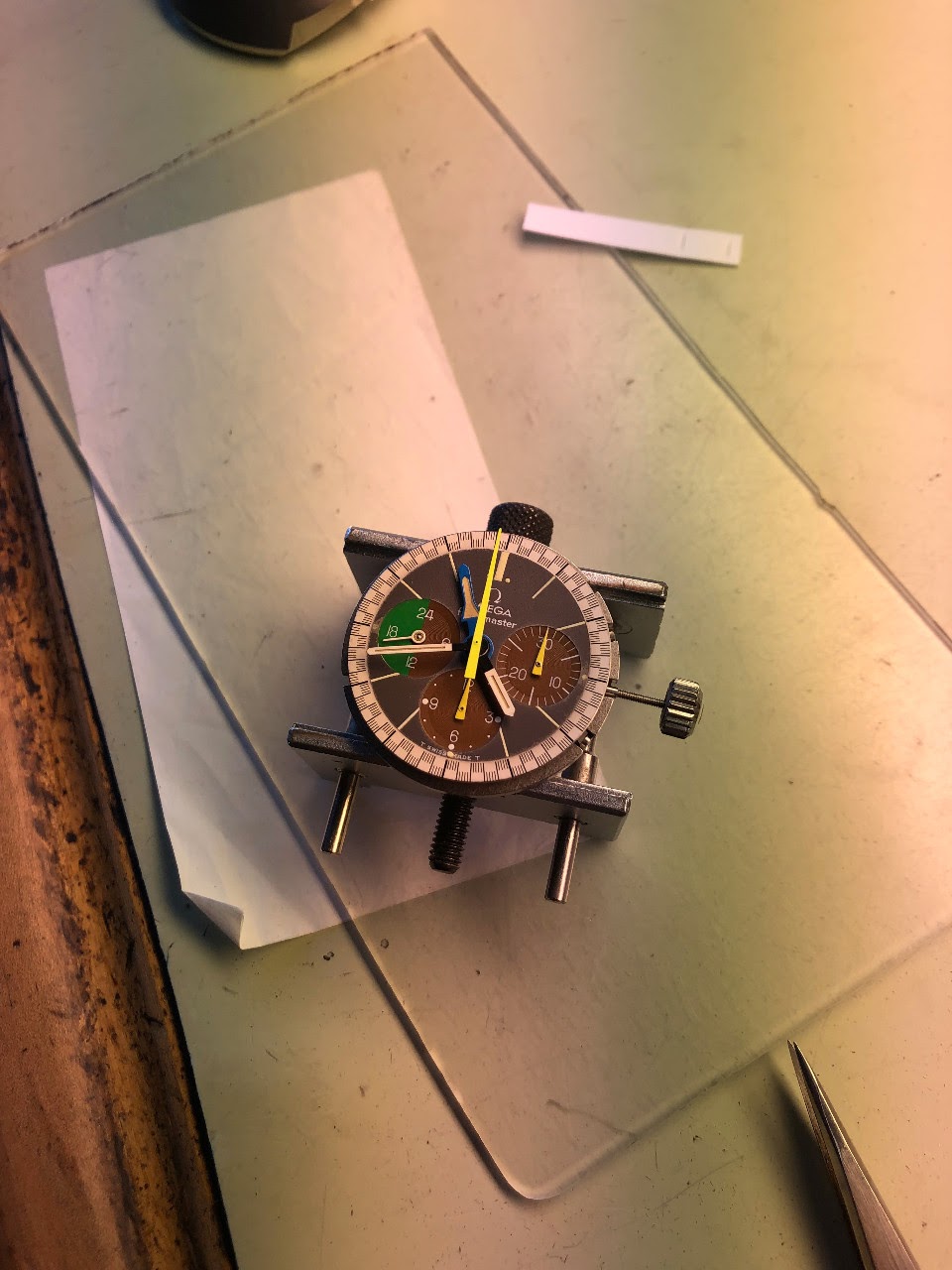 It might as well have come from another planet.
:-(  :-(
Not only was it brighter than the sun, it didn't fit properly without considerable tweaking by my watchmaker.

What to do?
As if by divine intervention, an original yellow sweep seconds hand appeared on eBay.  It was part of a package of 910 parts located in Italy.  I contacted the seller three times to see if he would sell the sweep seconds hand separately.
No reply.
So, after consulting with Abel, we decided to acquire the whole package - at considerable expense, I might add.  I'm sure Abel was disappointed; I was both disappointed and embarrassed.  The Flighty was in perfect original condition when I received it.  Now, it had to be reassembled with a hand from another 910.  Authentic, and a much better match than the abomination from New Zealand, but not original to the watch.  We swallowed our disappointment, and the restoration process continued.
A week before it was due for final assembly, I visited my watchmaker and inspected the movement and case.  The movement was undergoing timing trials, while the melted rubber had been cleaned off with mild detergent and Q-tips.  My watchmaker was unable to remove the bezel crown, so he had to treat the melted rubber gingerly.  The case was relatively clean that day with the bezel crown attached, black color coding intact.

A week later, the Flightmaster was finished.  I retrieved it, marveling at its pristine condition.
The next day, I took macros to share with Abel.  The seconds hand matched up pretty well! 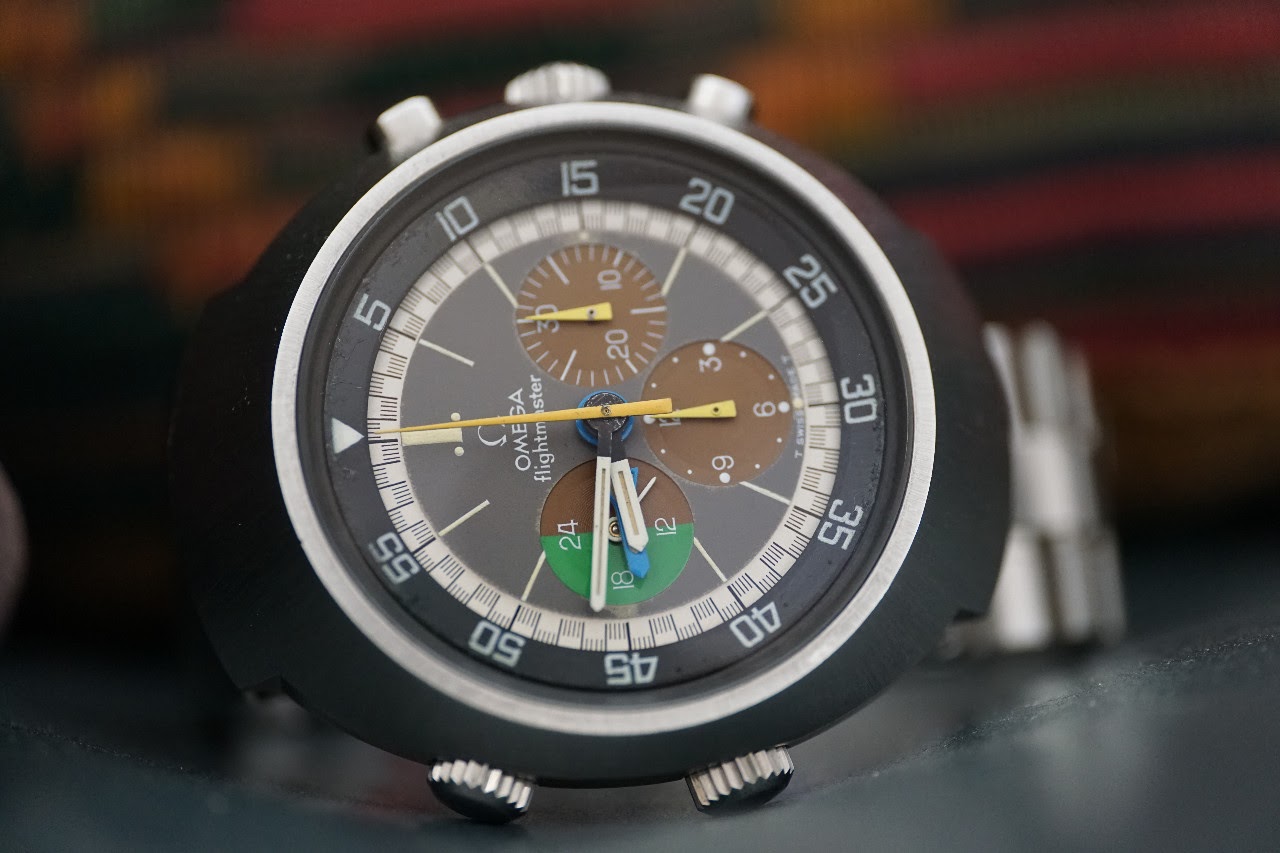 Moments later, I took this snap. 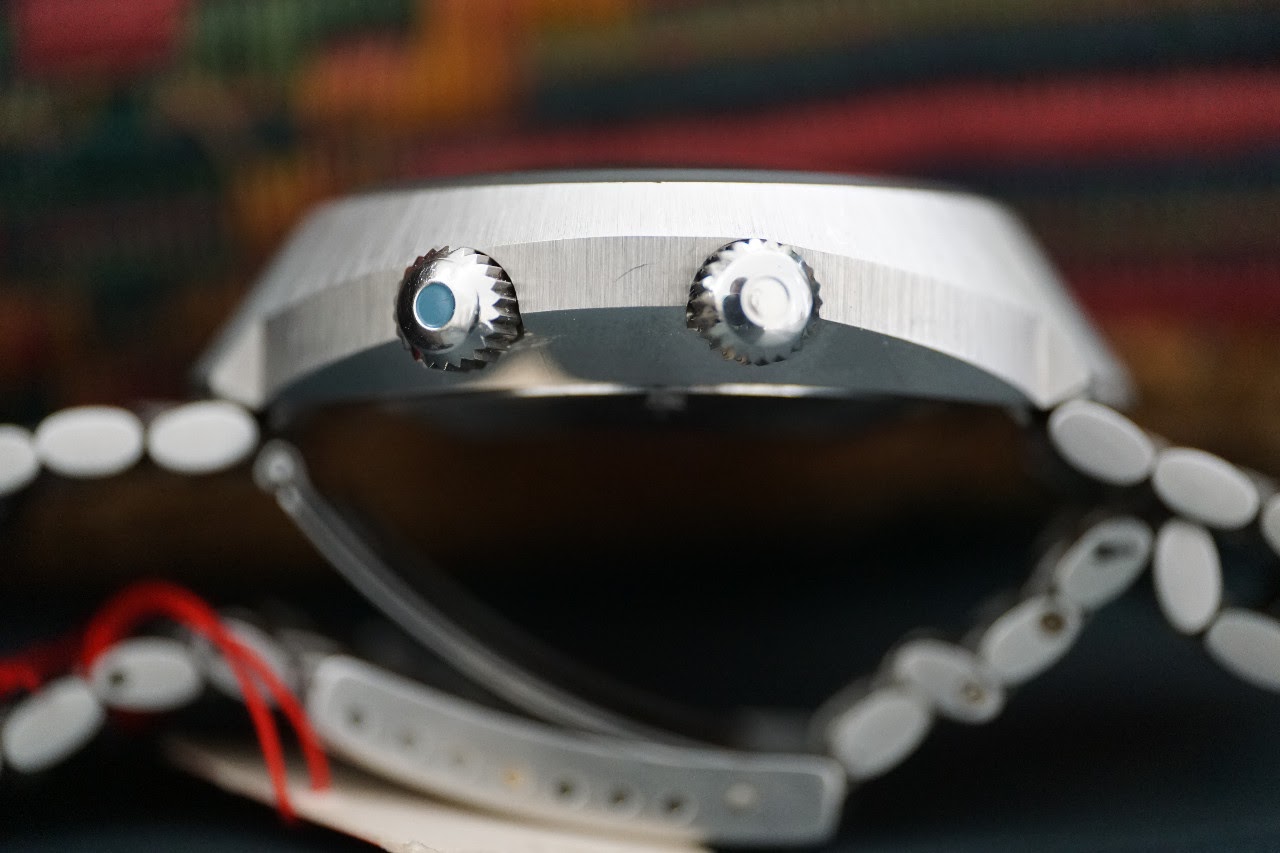 I couldn't believe my eyes.  The bezel crown was bereft of black paint.  And it had been there a week before.
Obviously, my watchmaker had decided to put the case in his ultrasonic bath for a thorough cleaning.  There was a bit of residue from the cleaning agents evident on the case a week before, so he must have thought it best to remove it altogether.  In doing so, the bezel crown paint disappeared in the process.  This was an uncharacteristic mistake: all the work he's done before had been spot-on.

I was beside myself.  How could this happen?  If it happened to my watch, I'd be livid; the insult to a friend's watch in my care was far, far worse.

I contacted Abel immediately.  There were no replacement bezel crowns to be found anywhere**, and even if there was, it would have to be installed by another watchmaker.  My watchmaker had been unable to remove it, either because a special tool was required or there was a protocol he wasn't aware of.  What to do?

Abel to the rescue!
"How about if we paint the crown?", he said.
So, after discussing the issue with mrsnak, who happens to be an artist, I did. 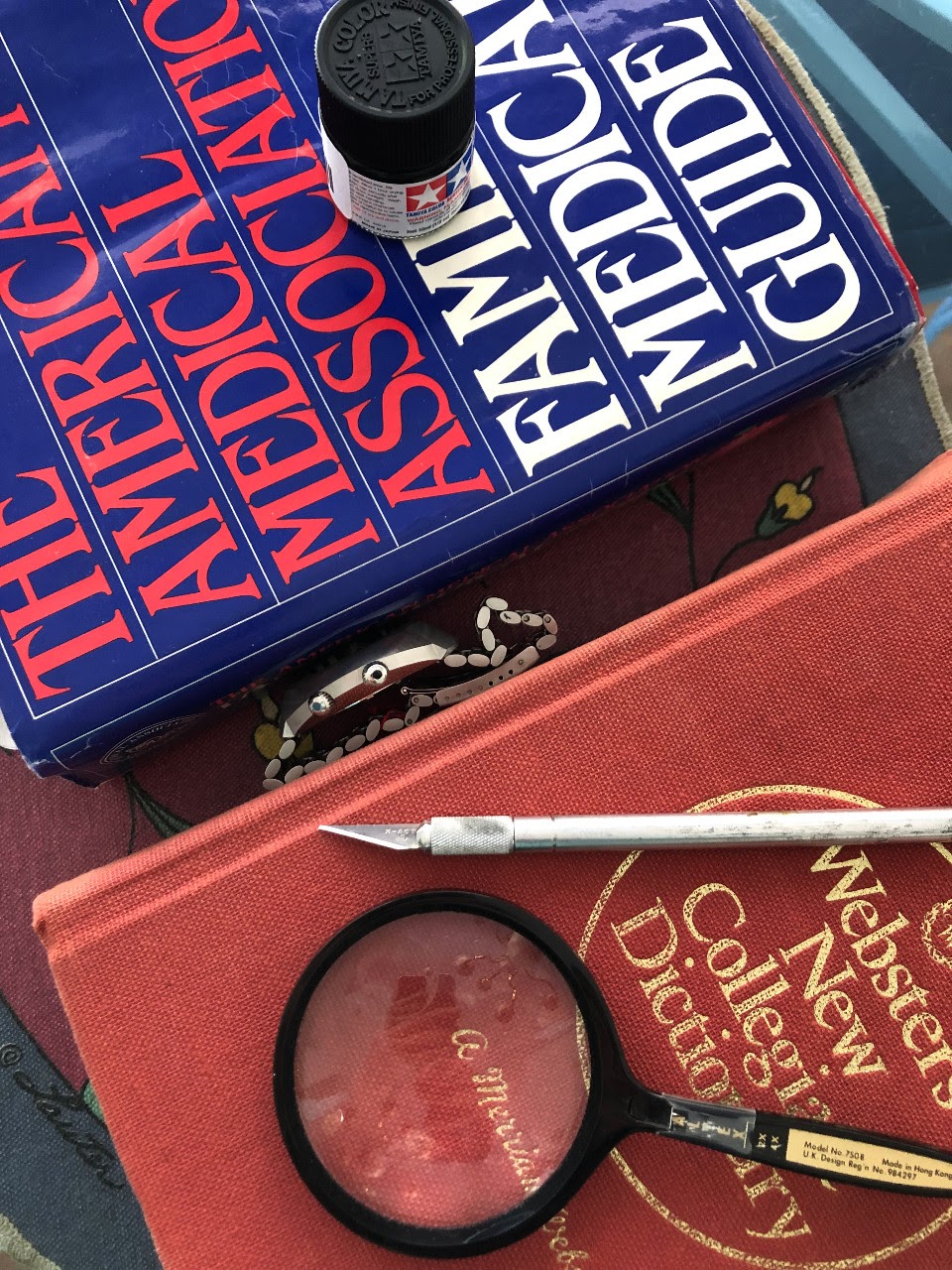 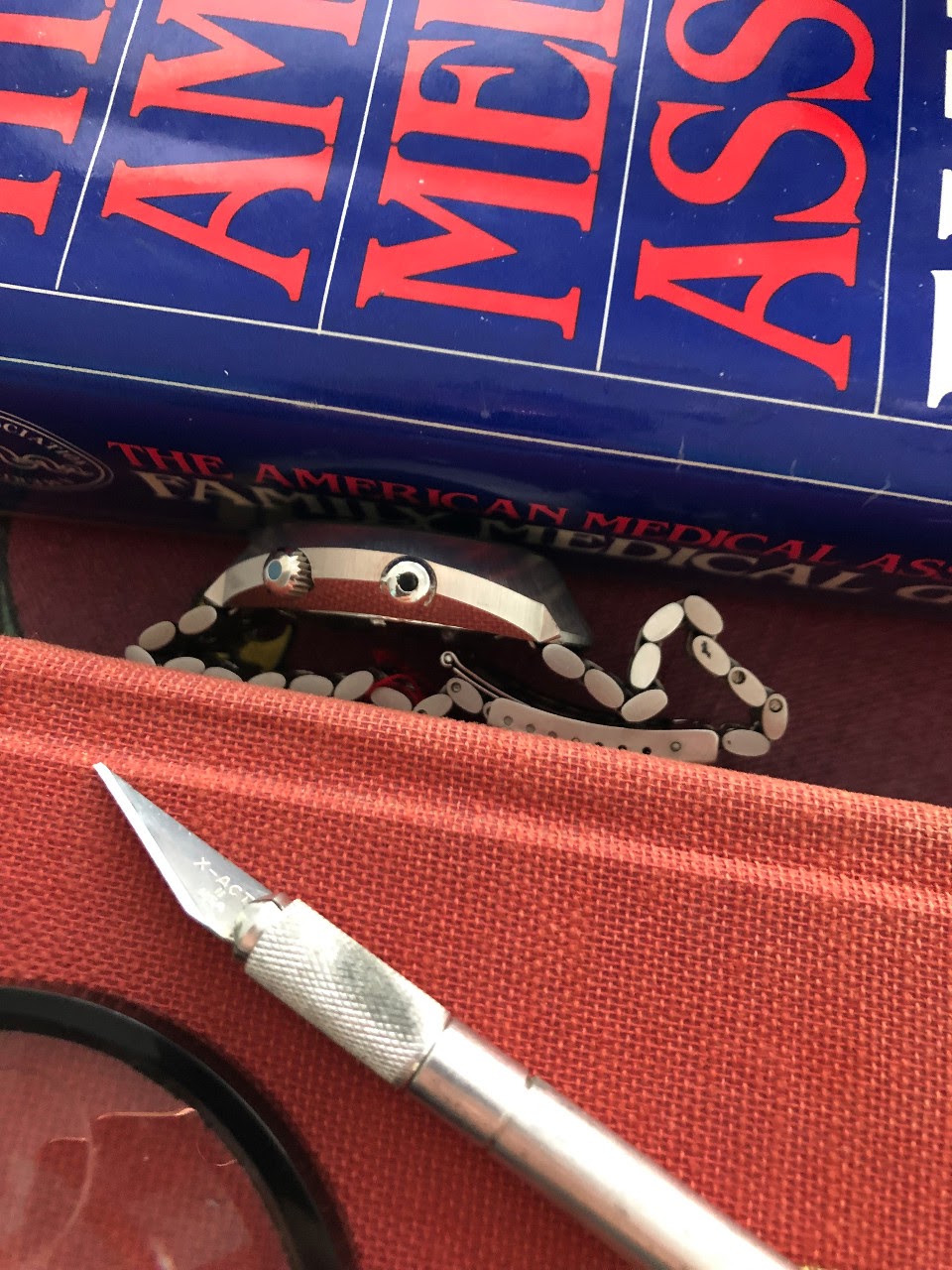 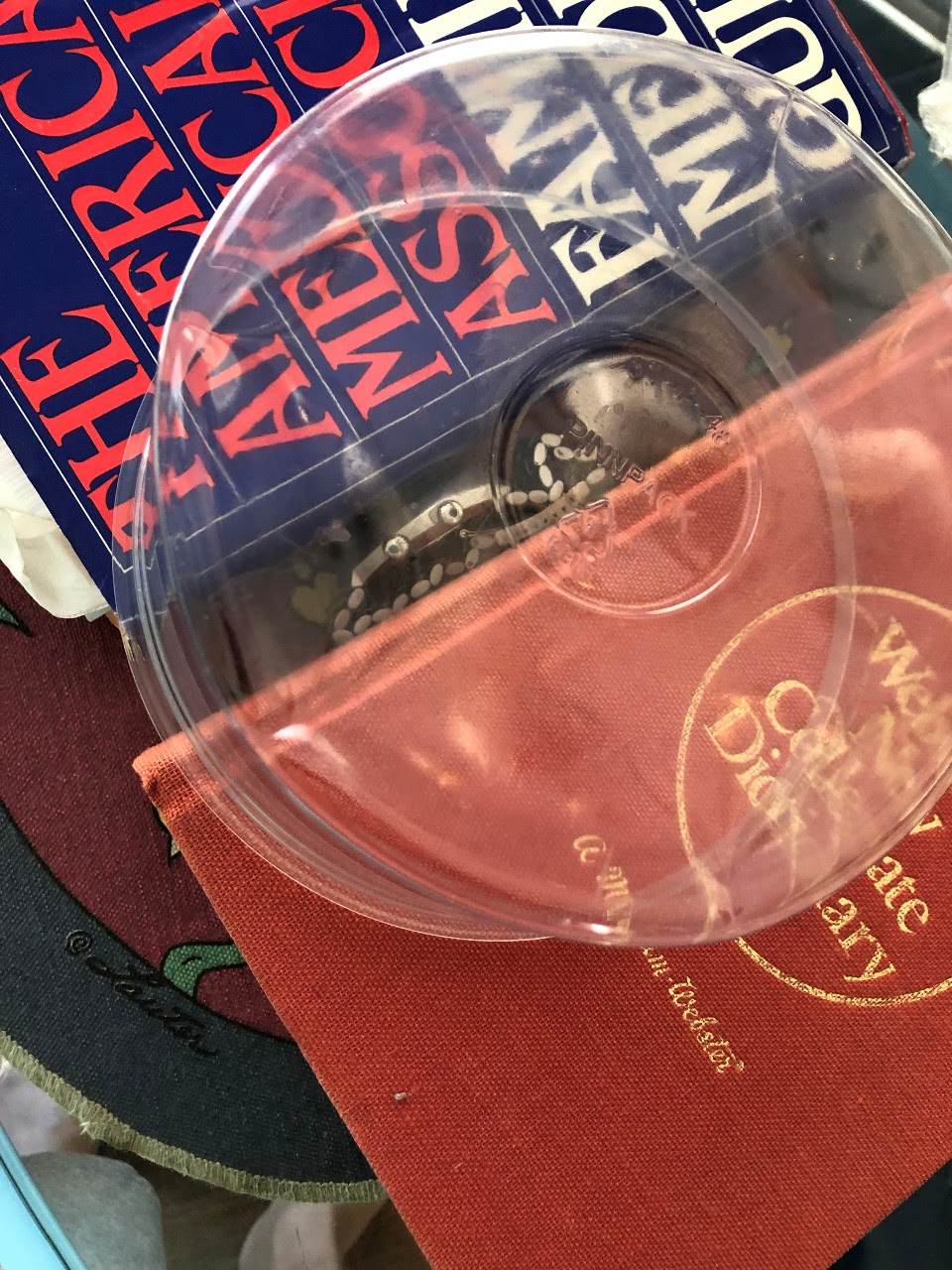 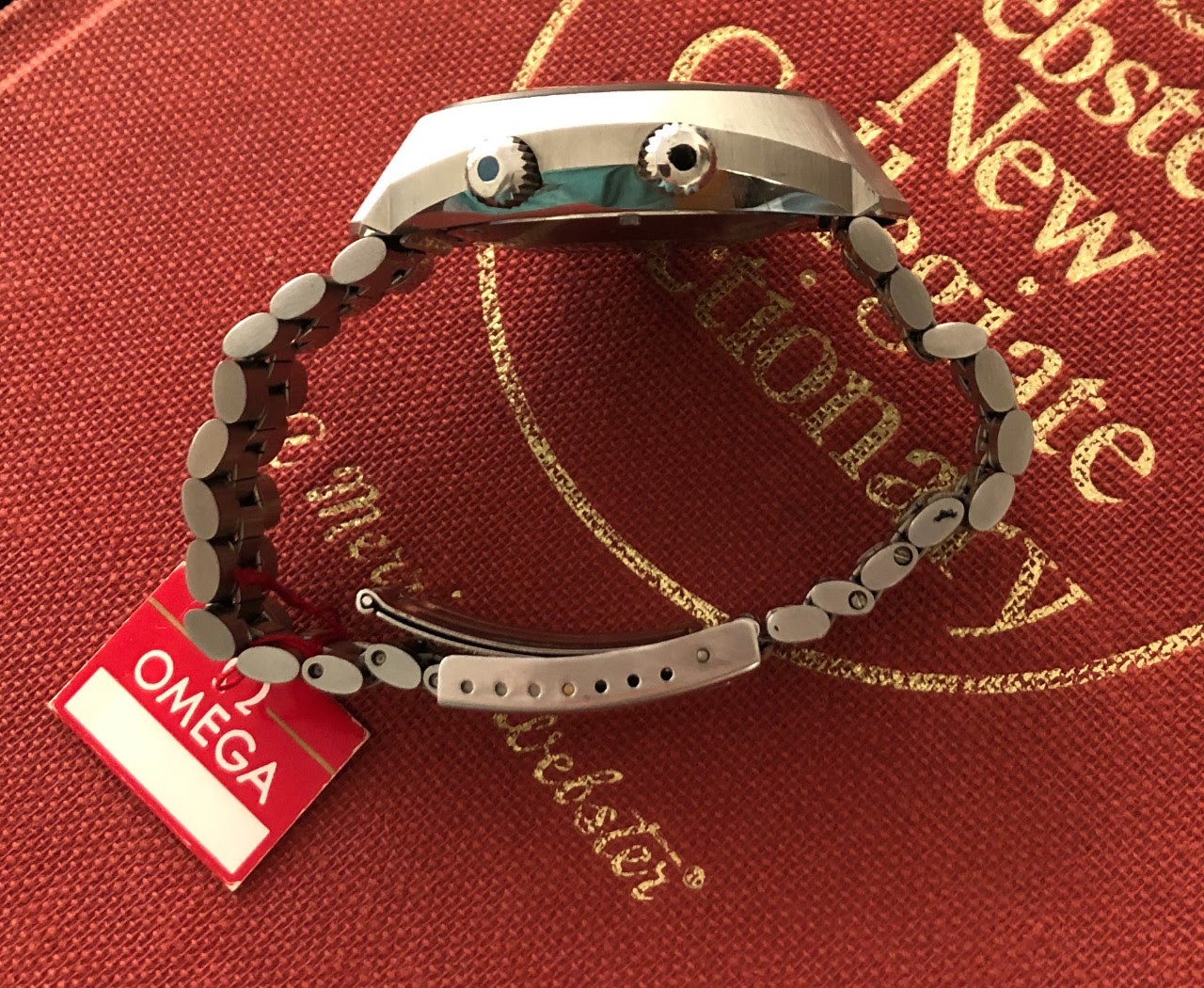 As they say, all's well that ends well.
;-)
*   among other issues, I had to establish a business account with FedEx(!) to receive the package.
** interestingly enough, there is a blue GMT crown available thru an American supplier.  Black bezel crowns are non-existent.

I feel your pain, Abel

By: cazalea : October 14th, 2019-19:17
Having gone through an 18-month ordeal to get this crown/stem replaced after I broke it myself ... We are crazy, aren’t we?! Mike PS - Art, you can expect to receive a use tax bill from Calif, because when you have a Fedex account, they forward your decla...
login to reply

Most interesting. I received a Federal tax bill that was initially paid by FedEx . . .

Hello Mike! Thank you so much for your comments and sharing your own experience with your Pogue.

By: Subexplorer : October 15th, 2019-08:16
... Yes, this is a crazy hobby and we need a bit of madness in our souls to go through all the matters required to hunt, find and capture our pieces and to put them in good order afterwards to be able to enjoy them. We are rewarded with the pleasure of me...
login to reply

The pitfalls of restoring a vintage watch are getting deeper by the day, Nicolas. Only a few years ago, external parts . . .

By: Dr No : October 15th, 2019-10:43
. . . for Flightmasters like hands and crowns could be had from a variety of vendors. Now, they're practically unobtainable. More than ever, we should be valuing condition as a primary consideration. A bit of patina and a few scratches or dings are one th...
login to reply

Yes, my friend, that is a tough game. I an experiencing it with a vintage Zenith for some years, now. [nt]

Pardon my confusion on this but are there not lots of these floating around the internet these days like Chrono 24...

By: Dr No : October 15th, 2019-07:52
. . . over ~ two years. Yellow hand variants are less common than orange. So yes, they're not exactly scarce, but they're not commonplace, either. Finding one in excellent condition doesn't happen every day. I was searching for the better part of a decade...
login to reply

Thanks. I lost mine in a divorce in the early 80s, so I moved on from them, but always liked them. [nt]

Wow dear Art!! I will keep this post as a document of the story of this beautiful timepiece!! I feel both you and me didn´t imagine all the work you had go thorugh...

By: Subexplorer : October 15th, 2019-07:43
... not only with the purchase but the later restoration work to be done to it! I´m happy all came to a good end, but only regret all the extra work, time and efforts you had to devote to this project (including some personal painting skills!! Lol!) which...
login to reply

Helping you attain this Flightmaster has been . . .

Thank you my dear Art. I appreciate that so much. Best! Abel [nt]

Great shot, my dear Art. Better, a moving one. [nt]

What a fascinating tale, Art

By: thegrailwatch : November 22nd, 2019-19:22
Abel is lucky to have a friend in you. Unfortunately you are scaring the bejeezus out of me in picking up a piece for my own collection🙅🏻‍♂️
login to reply

Well, if it's any consolation, my Flightmaster journey . . .