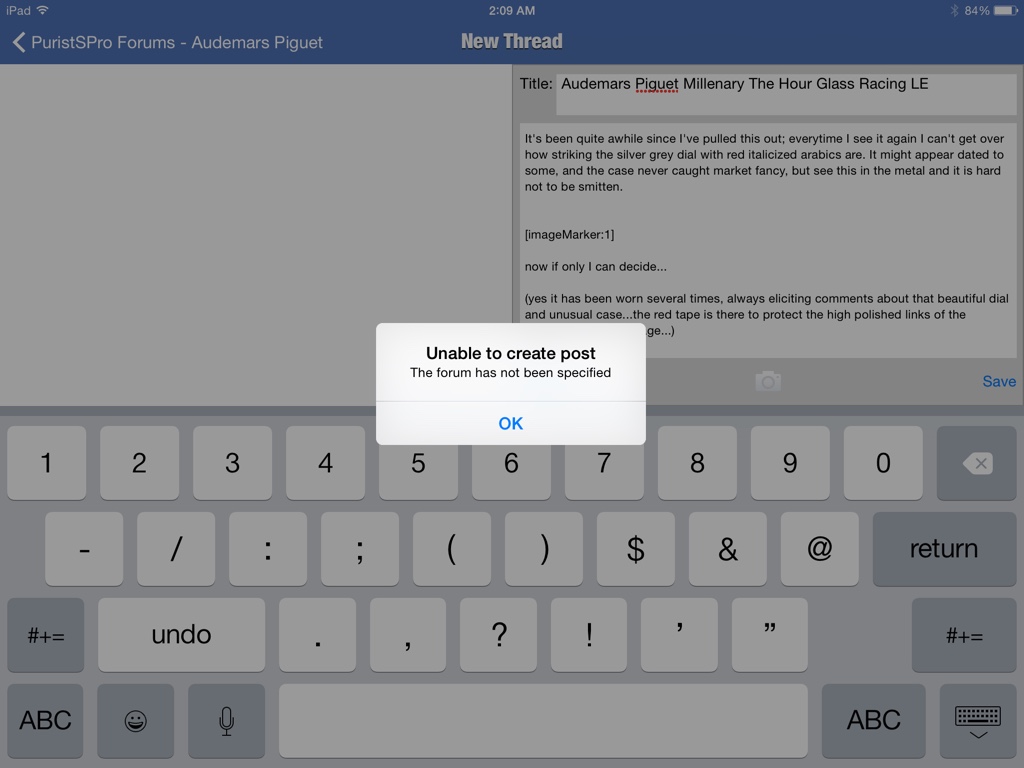 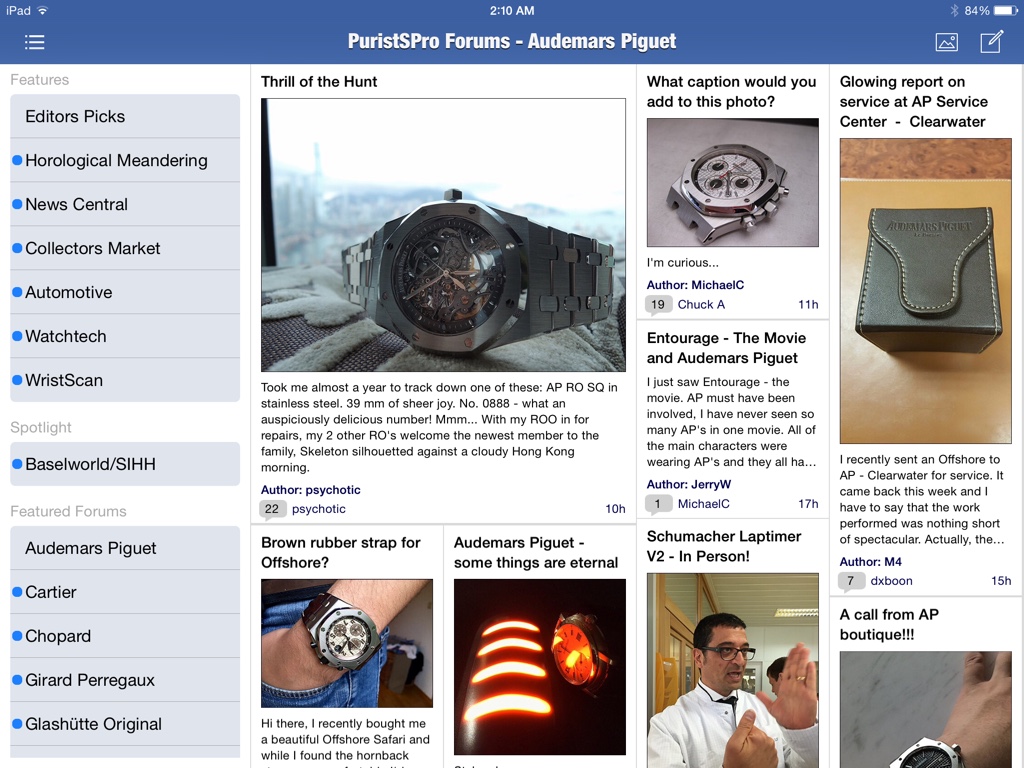 By: carl : March 15th, 2014-15:28
Please place bugs here as replies to this post. Rather than creating separate threads for each bug.
login to reply

By: jrwong23 (aka watchthebin) : March 14th, 2015-09:32
Has no sound when played on the iOS app. Check out Mike\'s Latest Montblanc video for eg. I turned on sound to max but still silent when the video is played from this app Cheers Robin
login to reply

Works for me on iphone 6

This isn't a bug but a suggestion - video icon

Re: 1/ Consistency/ Behavior of index-numbers in grey & blue " bubbles" on Forum level -- 2/ Time stamp difference(s) between Forum level ( indicated last reply) and actual thread level for this given entry

By: hs111 : March 19th, 2015-02:55
Re: 1/ Consistency/ Behavior of index-numbers in grey & blue " bubbles" on Forum level -- 2/ Time stamp difference(s) between Forum level ( indicated last reply/entry) and actual thread level for this given entry After some test use, including switching b...
login to reply

By: carl : March 19th, 2015-03:55
Blue/grey bubbles. The number in the blue/grey bubble is the number of responses to that thread at the time the thread listing was retrieved by the app from the server. If you stay within a forum for a period of time then this number can go stale, as othe...
login to reply

Thx a lot kindly for this quick reply !.. Very much appreciated, also. - It's now much clearer, when understanding the underlying mechanisms & rationale.

By: hs111 : March 19th, 2015-04:34
Probably I\'ll play along a bit, and change in Settings, the pattern for refreshing.. Thx again and let me say, that I\'ve already started to use the App almost every day, sometimes in comparison with the Safari-based Browser, - I find it really nice, and...
login to reply

Thank you for all your feedback. It is very helpful and we are thankful.. [nt]

My pleasure, Bill !.. Again, the Apple Dev Team has to be congratulated, to what already has been achieved ! :))

In news central, all my posts do not show up as justified format

Re: Text behaviour in Title field. - Scrolling ability for the text lines

By: hs111 : March 27th, 2015-00:20
- when entering more than 2 lines into the title field, the text is not scrolling any more. This makes a correction in upper line practically impossible, as one cannot place the cursor into a line/word which is on top and not currently in display. I know,...
login to reply

You can just scroll the title field up or down.

Thx, just now received the latest version ! - will try it out here with these lines: well, actually the title line shouldn't be too long anyway.. - in my version once I'm in line 3, can't scroll upwards (to line1).

I'm using the same version as you and it works on both iPad and iPhone. You just place your finger in the title text area and drag it up or down.

Two points for me. More than 7 or 8 words is a long title. And I am still on line now this has scrolled to two at I am. Should I keep typin it now disappear line 3 hidden now I put my finger the title box to scroll

Yes, you're right !.. Was just a little interesting..

Long titles should now behave more as you would expect.

Thx Carl - didn't want to cause lots of extra work, but appreciated- (in the Browser versions we just have a bit more than 1 line .. - here it really nicely works now) :))

Glad to see the long title post is working for you. Best Bill [nt]

That's great. But what about a little more information.

By: carl : April 18th, 2015-06:07
Like how you got to this point? Without that it is very difficult to track something like this down.
login to reply

let app logged in running in background, home button to other apps, home button back to app, allowed it to refresh, got error

Somewhat baffled as to what generated this collection of threads.

By: carl : April 21st, 2015-05:00
The latest version sends a debug log to the server when you post to the iOS forum. I see you have now installed the latest version. But this may have been posted prior to installing it as I do not see the debug log. Best guess is that resources on your de...
login to reply

Re: " Shortening" text: Forget about it - pecularity variably exists .. Cannot delete this post any more..

By: AnthonyTsai : April 26th, 2015-10:03
There\'s no bold face or different sized fonts that show up when I read using my iPad mini.
login to reply

By: carl : April 26th, 2015-19:58
We need to provide a consistent look and feel across all devices. For example things like font sizing are a serious issue. Our fonts need to size by the the users preference on the device (given what they can actually see) not the post authors personal pr...
login to reply

Happened again; sorry run out of time and patience

By: ThomasM : May 1st, 2015-04:15
glad this is for our secondary topic, automotive (though this is world exclusive stuff - real time PuristSPro quality time with a living legend, with stories about Enzo Ferrari and classic racing when drivers were heroes) and not during SIHH or Basel or o...
login to reply

Not sure, if a bug at all.. Re: APP photo upload in new version.. When text has been entered before, then imgs upload will delete it & only leave the Image marker n (?!)

By: hs111 : June 4th, 2015-22:56
Previously, one nicely could enter text, then place cursor, then upload pic, would land at right spot (prev cursor position). This was great, as one could upload 1 or several pics, and one could upload & place them in one step. Maybe I did something wrong...
login to reply

How to implement a direct link into the post from within App ?

By: hs111 : July 21st, 2015-08:42
Recently came across the need, to implement a link to another Forum-post here. 1/ Tried the prev technique for App & the Browser mode ( in Safari): - looked up the target post using Search in the App/ tried Copy & Paste into the Edit stream of the origin-...
login to reply

No bug, just inquiry about the possibility to again implement the section on PPro TV, where many brands post their movies ??

By: hs111 : November 28th, 2015-02:41
.. The old functionality of the previous website did contain this feature, which IMO actually was very nice to have.. E.g. to show a tourbillon dancing or trailers or spots for specific models. - Thx in advance for commenting, pls; Best, hs This message h...
login to reply

Sorry, not quite clear to me .. Which Brands/Threads to start from?.. Command ??

How do I upload pictures from my photos please. iPad. [nt]

By: rdenney : July 17th, 2019-08:47
When I upload a pic from my photo library, the app shows the data counting up to 100%, pausing, and then disappearing. But no photo ever appears in the post. Same result whether a new post or editing an existing post. —Rick
login to reply

Not seeing an issue.

By: carl : July 18th, 2019-04:37
Is this still a problem for you? If so could you let us know what device/version of iOS you are using. And is the app the latest version too. Many thanks.
login to reply

By: rdenney : July 18th, 2019-05:57
But now the image uploaded. I tried this on two different WiFi connections and also LTE yesterday, with no luck. Power down of phone didn’t help. Now it works. Go figure. ...
login to reply

There is an imminent update that resolves this issue... [nt]

The update to fix this is now in the App Store. [nt]

By: Millhoose : March 29th, 2020-00:26
Hi - if I try to use the filters in collectors market (eg to look at private deals only, the whole app crashes Thanks
login to reply

There is a fix for this coming shortly...

By: MTR : February 28th, 2021-03:48
If you upload pics and text via the smart phone app (iPhone) and try to save it, just fragments of the text (today just one word) are shown and all the photos are lost (not saved). I tried it again via website. And that worked. Best Thomas
login to reply

We are not able to replicate this.

I am using the iPhone app.

Is there a way to get the "iOS" tab to appear on "whatchprosite.com" via a browser?