Sep 27, 2019,14:33 PM
I prefer to go straight to the point. There is one detail that I don't like with this new release from  Vacheron Constantin, it is the strategy of the brand which surrounds it. In fact, I find it hard to understand why Vacheron Constantin has partnered with Hodinkee in 2017 to release a limited edition of the chronograph Historiques Cornes de Vache, explaining its exceptional character because of its steel case ... And two years later, here is the come-back of the very same case in another context. In short, the presentation of this novelty in 2019 only confirms what I thought in 2017: this partnership was useless for the image of Vacheron Constantin and it would have been better to skip this step and bring directly the chronograph in steel in the catalog . So certainly, the two watches are not the same and their respective dial colors can easily distinguish them. But at a certain point, brands must understand that the legibility and the consistency of their strategies are also part of the arguments that appeal to customers. 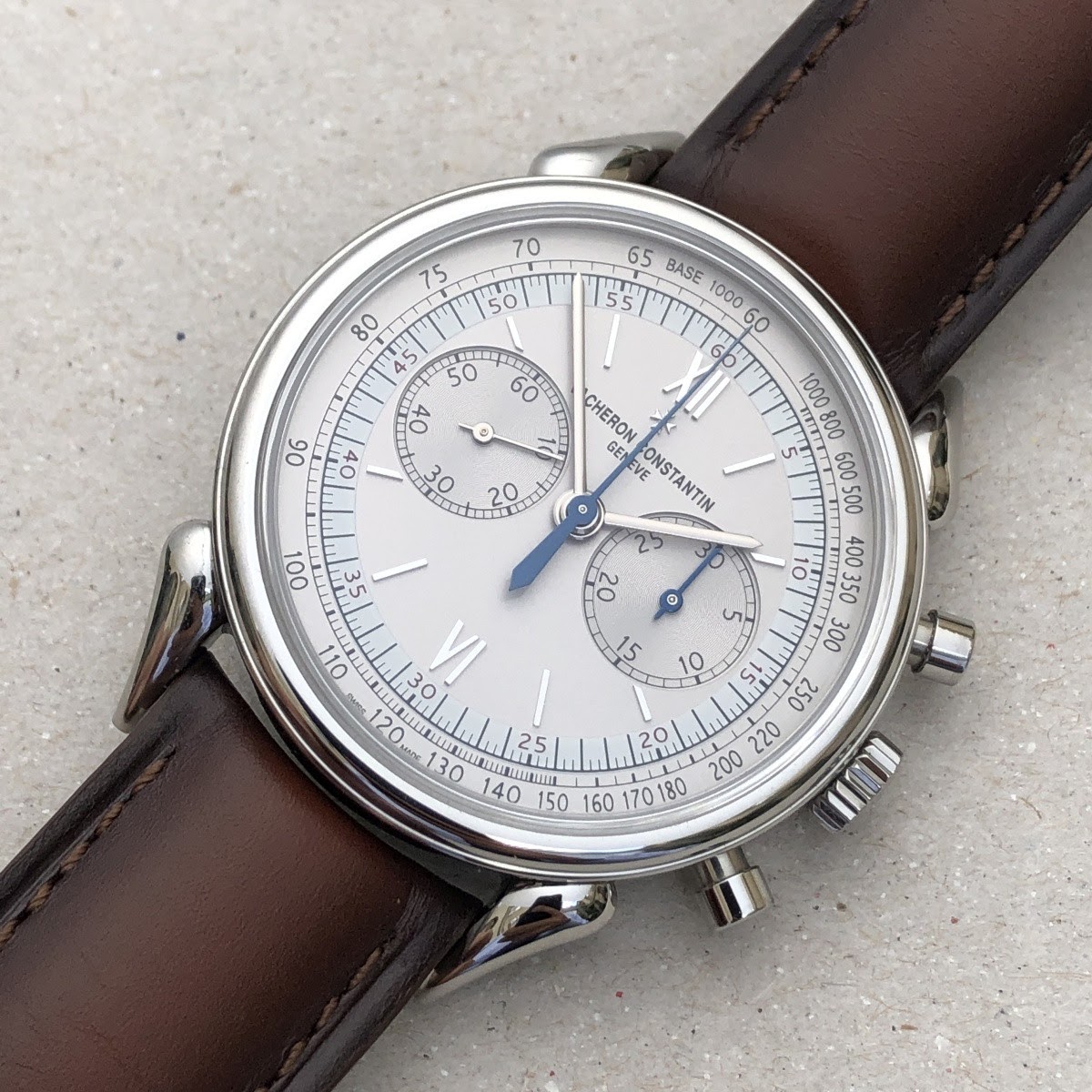 If I started with this remark, it is because deep inside me, I have found very little to critizice about this watch that I like very much. The aesthetic context was in every way very favorable: I was totally seduced by the platinum and pink gold versions of this same chronograph. 4 years after its first presentation, I have hardly changed my mind. The case is obviously the major asset of the watch. Its diameter is ideal (38,5mm) for an elegant watch. Its thickness of 10.9mm is also well dosed because giving to the whole a slender style without being too thin. Obviously these are the lugs that give character and define the identity of the piece. They extend the case and increase the perceived size. Vacheron Constantin is unquestionably very comfortable in its Historiques collection and the delightfully retro atmosphere of the case works perfectly.

The dial of the steel version is paradoxically more like the platinum version one than the Hodinkee version one. The dominant metal color is similar and it is the color of the figures of the peripheral tachymetric scale that differentiate them at a glance. The dial is drawn in a very classic way but its realization is irreproachable. The Roman numerals and applied indexes as well as the slightly convex rendering contribute to the perceived quality and give subtle relief effects. The graduation of the seconds of the chronograph being located on the edge of the domed central part, it takes according to the light very beautiful bluish and discreet reflections. In any case, the information can be read without difficulty and I appreciate the use of blued hands for the chronograph data (minutes and seconds). 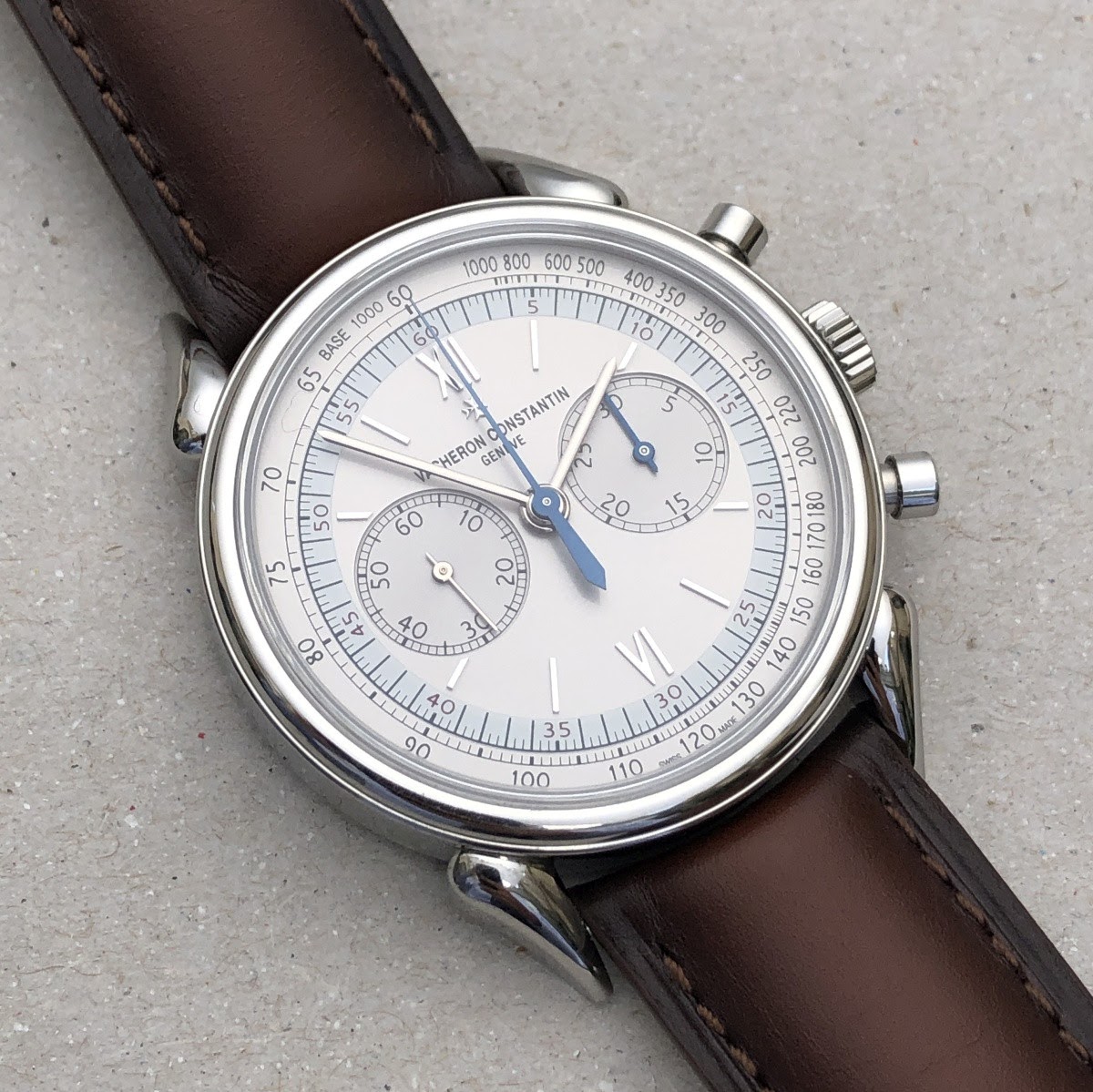 The reasonable diameter of the case also makes it possible to balance the dial. Indeed, the chronograph uses the caliber 1142 which is an evolution of the movement Lemania 2310. Yet the diameter of the movement is small for a chronograph caliber (27.5mm). The designers of Vacheron Constantin worked to make the sub-dials harmonious and visually less close to the center. They managed to achieve this goal, but a larger watch would have made the task more difficult.

The caliber 1142, despite its size, remains a very beautiful movement. Given its origin, it offers a classic and traditional architecture. The column wheel is however original with the presence of the Maltese Cross in its center. The finish is sober and neat, while respecting the criteria of the Poinçon de Genève (Geneva Seal). There is nothing flashy and this discreet and refined style is perfectly suited to the spirit of the watch. The caliber 1142 is not a simple evolution of the Lemania 2310 with the Vacheron Constantin style. The brand has reworked the movement to give it a higher frequency (3hz against 2.5hz for the original caliber) with a power reserve of 48 hours. The triggering of the pushers is precise and the manual winding is pleasant. In any case, this caliber is the engine perfectly suited to this chronograph. I couldn't imagine the use of a movement recently designed in such a watch. 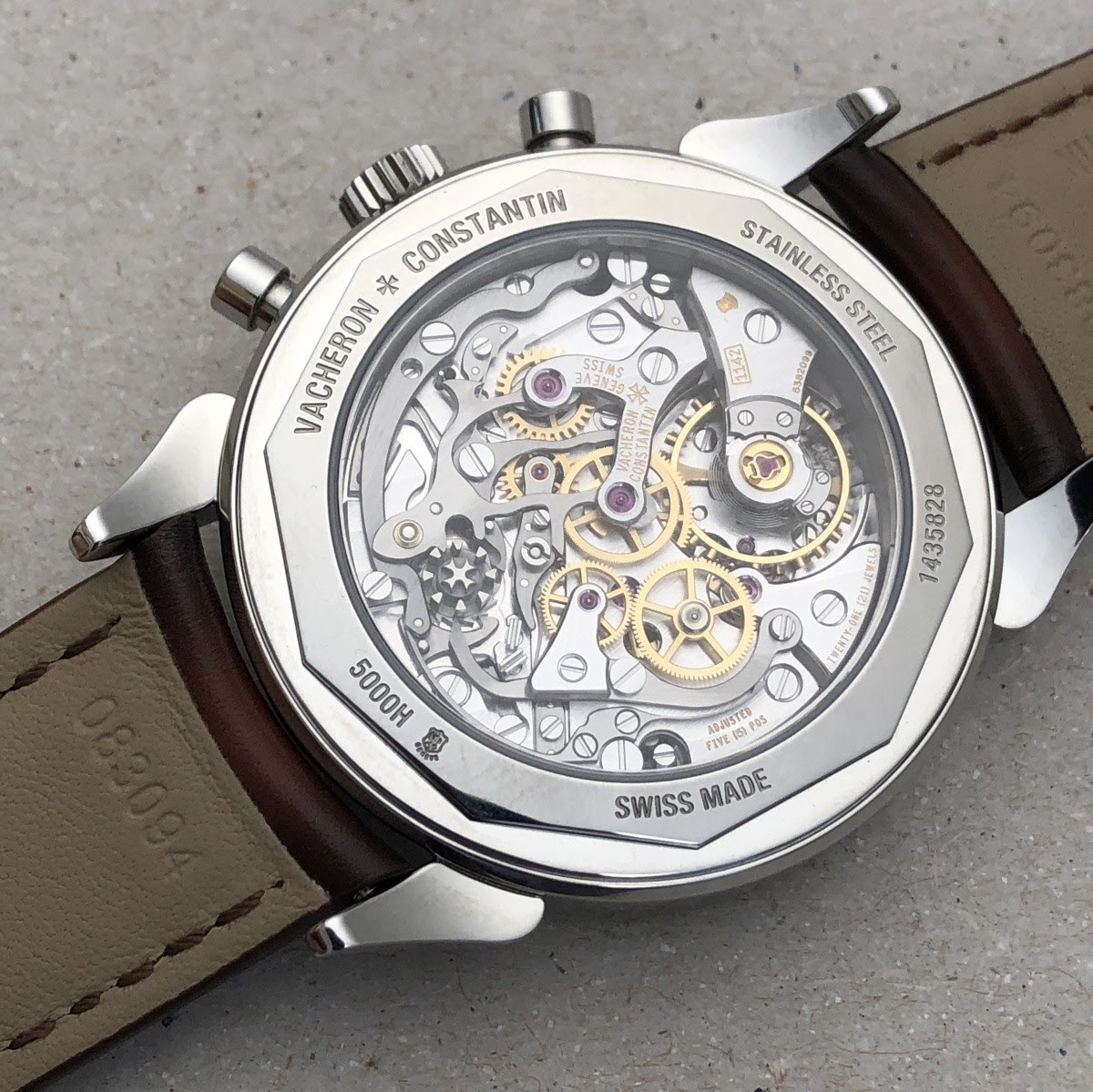 The real highlight of the Chronograph Historiques Cornes de Vache in steel is the same as with the other versions: once put on the wrist, it emerges an irresistible charm. The watch is successful because it is consistent, elegant and has the little touch of character that hits the mark. Pleasant to wear and to use on a daily basis, this chronograph is a new proof of Vacheron Constantin's ability to effectively  reinterpret its heritage. The price is in the standards of the brand and can therefore be considered as high. Indeed, a price of 41,600 euros TTC surprises for a steel case. I think it is still well set because it is consistent with the price of the platinum version (72,500 euros) and the pink gold one (56,000 euros). I remain convinced that these prices are too high (a simple gold chronograph from Lange is available at a price of 51,000 euros) but at least their respective price gaps are logical. But let's not forget that the additional virtue of this steel model is to offer this beautiful chronograph 15,000 euros less than the pink gold version which is far from  being negligible. Finally please note that the chronograph is sold with a beautiful brown calf leather strap made by Serapian.

The rendering of the dial can change very often according to the light: 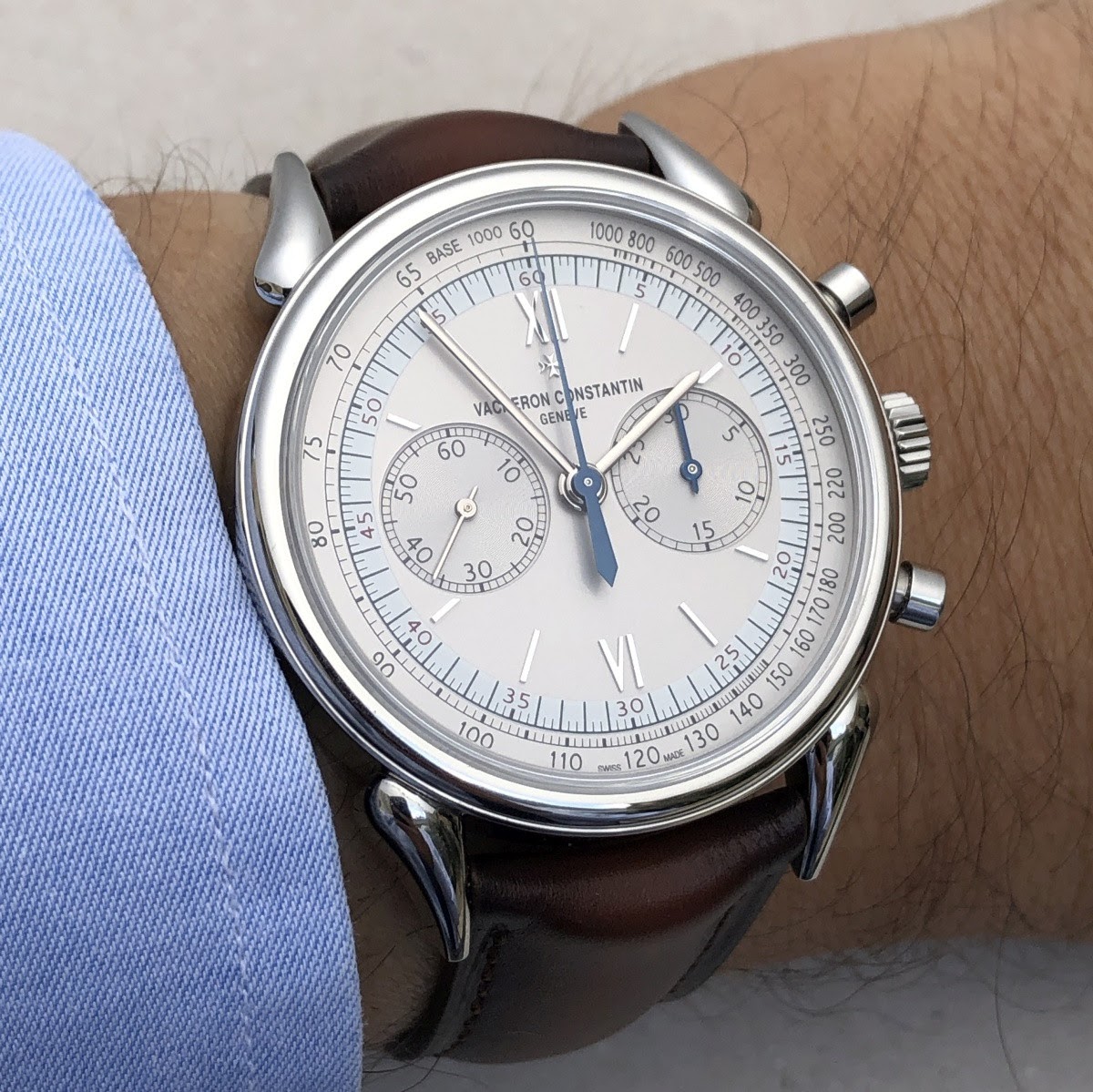 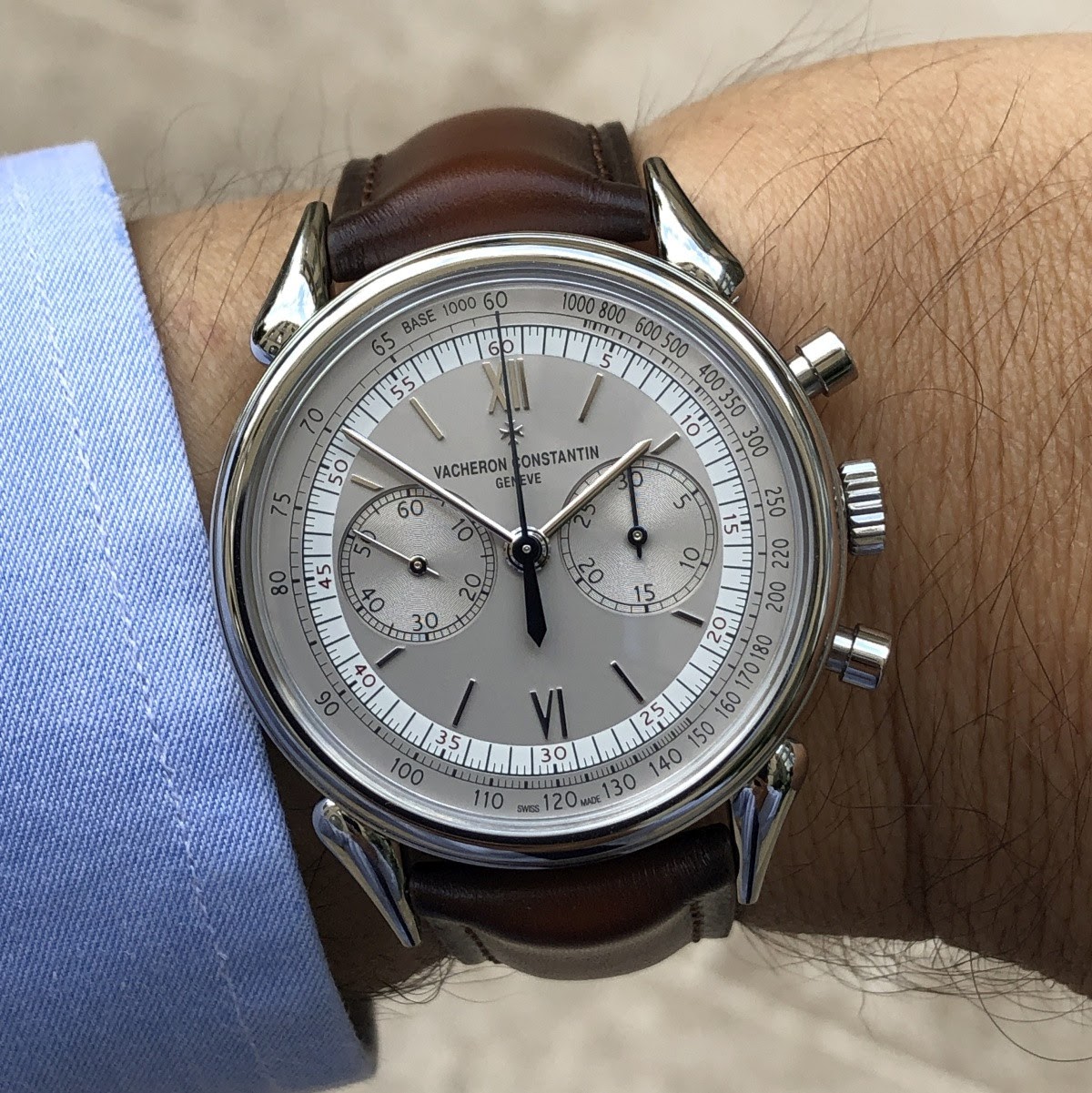 + an aesthetic success thanks to a sleek and elegant design

+ the simple and refined presentation of the movement

+ the comfort on the wrist

+ the beautiful strap by Serapian

- the diameter of the movement is a little too small
login to reply
Comments: view entire thread

By: foversta : September 27th, 2019-14:33
I prefer to go straight to the point. There is one detail that I don't like with this new release from Vacheron Constantin, it is the strategy of the brand which surrounds it. In fact, I find it hard to understand why Vacheron Constantin has partnered wit...
login to reply

If I may say, an informed & informative, interesting & enjoyable assessment. [nt]

A nice looking Chronograph, that's for sure. But I agree with your points, too expensive ( I thought it was in USD! ), a too small movement, and the precedent of the Hodinkee version...

By: amanico : September 27th, 2019-15:16
A detail I like a lot, the maltese cross in the column wheel... Though, a charming chrono, with its pros and cons. Best, Nicolas
login to reply

Agree with all comments

By: 4Js : September 27th, 2019-17:46
The problem is a long term value one. One can purchase a used platinum on the street for the same list price as this steel, if not less. It’s tough to consider any new Vacheron given the drastic loss of value after purchase. I would love to own a Cornes d...
login to reply

By: Jurry : October 7th, 2019-02:44
Although I hear where your coming from and can understand your arguments, I’m not quit sure the “justification” argument After all, the theoretical depreciation is, until you sell it, only an unrealized loss and won’t hurt unless you’re planning to divest...
login to reply

By: LS : September 27th, 2019-18:43
The steel takes such a high polish well. Is the ring in the dial really light blue? It seems like it in some photos and then not in others...
login to reply

Great review on a stunning piece!

Great review. I agree with every point both good and bad. [nt]

Thank you for the fantastic review!?

Thank you for this excellent review

By: mrds : September 28th, 2019-00:05
I am with you on all accounts. A fantastic watch in any metal, but I also don’t understand VC‘s decision to launch it in steel after the Hodinkee LE. Best, Daniel
login to reply

Thanks for the review and pics . Great like always

By: Watchonthewrist : September 28th, 2019-00:22
Def a very good looking watch , love the lugs and dial layout a lot . But still a bit to highly priced imo
login to reply

thanks for the review Fx...i enjoyed reading your perspectives !

By: maverickmahesh : September 28th, 2019-00:55
i was just wondering how much would it cost us if this very same watch was introduced by other brands - it would be a so wide range, isn't it ? Best, mahesh.,
login to reply

By: mrds : September 28th, 2019-02:09
If you compare it to a T-Shirt for USD 10 from Uniqlo or 300 from Gucci, the range for watches still is much tighter. I fully agree with your point though. It comes down to, what actually defines the price of a watch: the material and work hours, R
login to reply

One of the best looking Vacheron's IMHO!

By: Watcholic_id : September 28th, 2019-08:05
of an excellent chronograph. Thanks for taking your time writing this review Cheers
login to reply

By: Jurry : October 1st, 2019-06:37
Thanks for your great comprehensive review. I agree with most of your arguments. Except I don’t see any real issue with the movement being small. As you mentioned it: they worked it well. And indeed if the case would have been bigger it perhaps might have...
login to reply

By: RGS : October 3rd, 2019-03:55
I agree in everything and most of all, on your first point about the unneccesary collaboration with Hodinkee. In addition, I would change the strap to a more fitting dark blue or brown square scaled matte alligator. If one wants something more sporty, I w...
login to reply

By: keks : October 4th, 2019-15:09
enjoyed reading... I recently had the opportunity to try this on my wrist at a VC boutique alongside the platinum version and must say I had high expectations for this steel release.... but trying them on next to each other I would say the platinum all da...
login to reply

By: Catulle : October 6th, 2019-21:09
Indeed, I would not buy anything “special edition Hodinkee”. Syncophantic behavior is not my forte.
login to reply