Sep 03, 2022,15:31 PM
Patek Philippe World Time Chronograph 5930P Review
When we travel, we are usually concerned with the time where we are. If we need to stay in touch with other parts of the globe, a GMT or World Time complication is handy. Putting those two together is not difficult. But if we also want know how long it's been since we parked the car, then a chronograph would be handy. All-three-in-one? No problem, if we happen to be wearing the Patek Philippe World Time Chronograph 5930P. 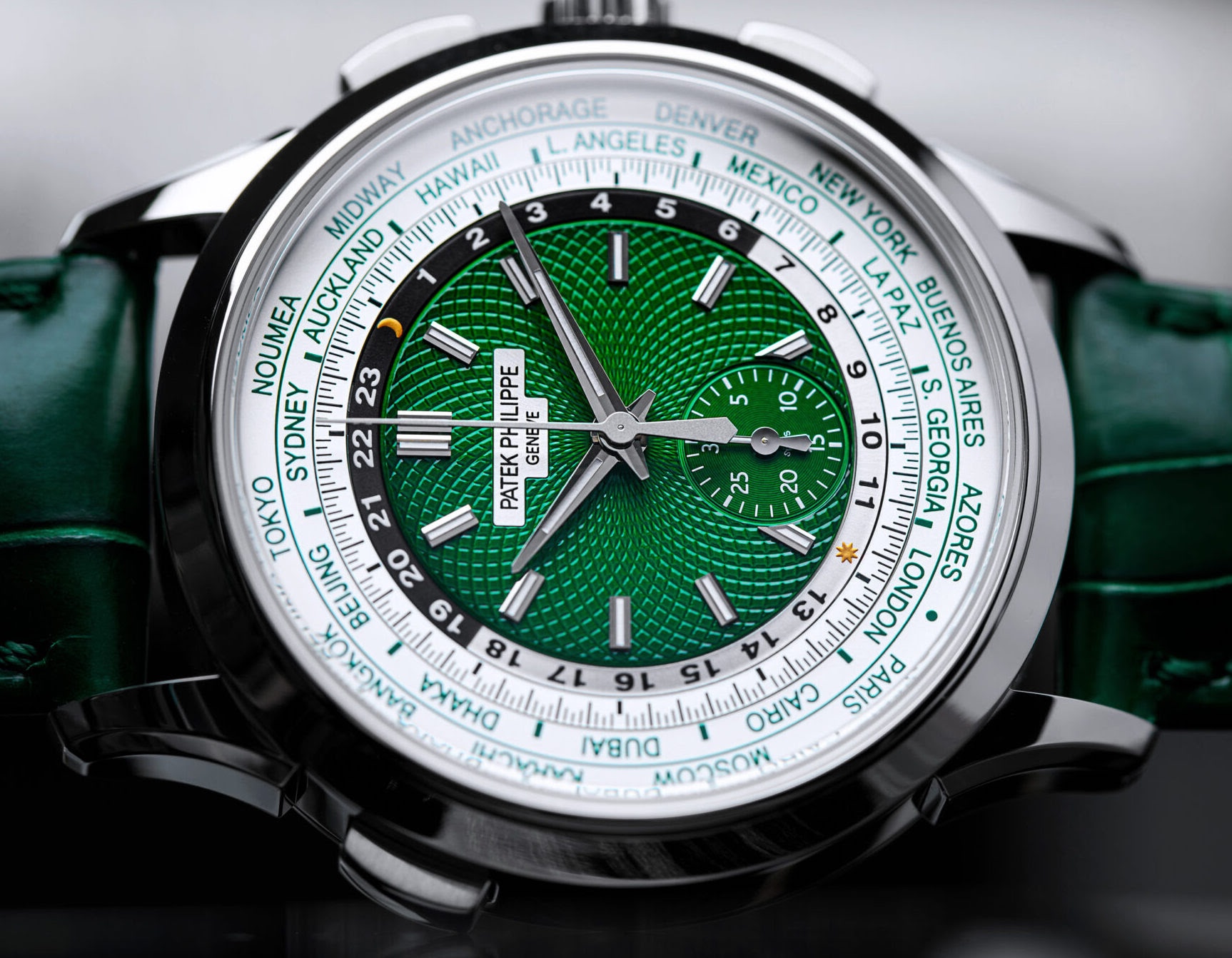 History
The Patek Philippe World Time 5930P was released at the end of 2021. It was preceded in 2016 by the Patek Philippe World Time 5930G, when Patek combined the world timer and chronograph in the layout shown here. The layout of world cities around the outside of the dial was first invented by watchmaker Emmanuel Cottier, who conceived the idea in 1885, but no one took notice.  When his son Louis developed the idea in 1931, his samples caught the eye of several watch brands. The concept of displaying time of cities around the whole world on a single dial took off. 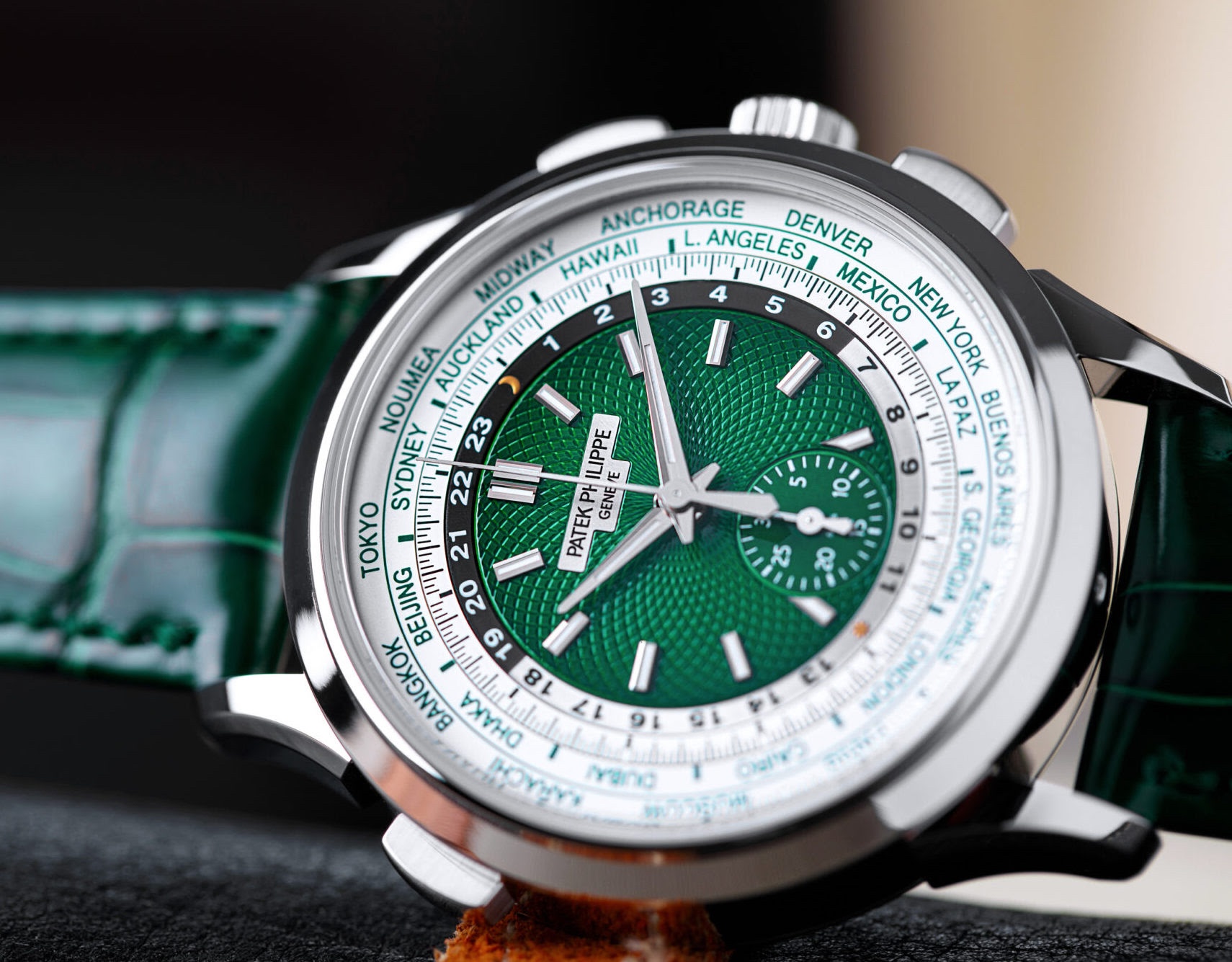 Patek Philippe released their first world timer in 1936, the reference 605 (a pocket watch). A few other models were made after that, but the most significant came in 1940. This was a “piece unique”, officially known as the Patek Philippe 1415-1; a world timer combined with a pulsometer-dialed chronograph. It was the ancestor of the 5930 World Time Chronograph line. 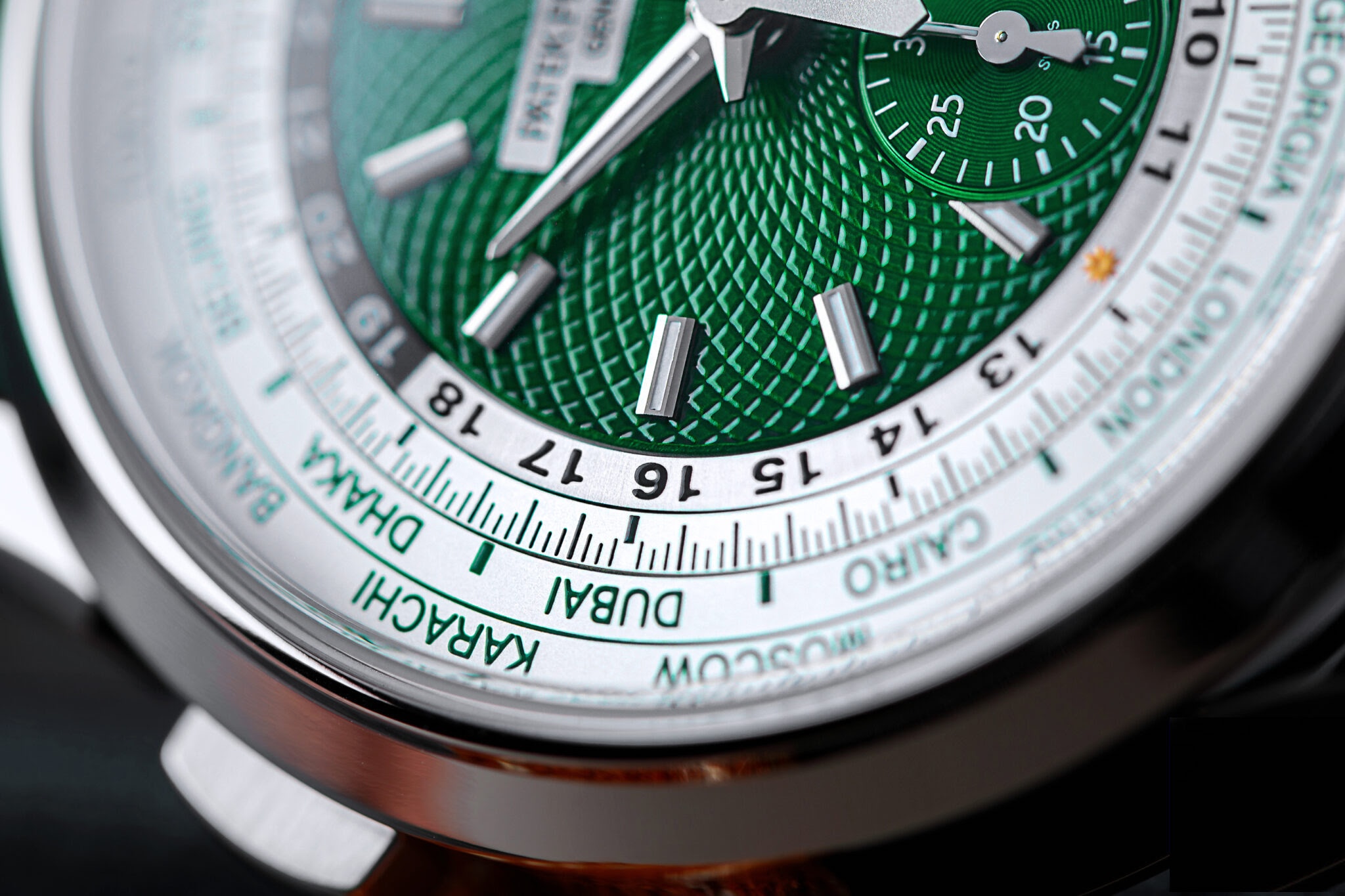 Design Details
The most-striking thing about the Patek Philippe World Time Chronograph 5930P is the emerald green dial. This watch is much brighter than the deep blue 5930G. Light plays across the hand-guilloched dial center, over which one can almost imagine fight paths of planes around the globe. Working our way outward from the center, we have a black/white 24-hour day/night indication, then a chronograph track, and finally the cities printed in green-on-white, further brightening the look. 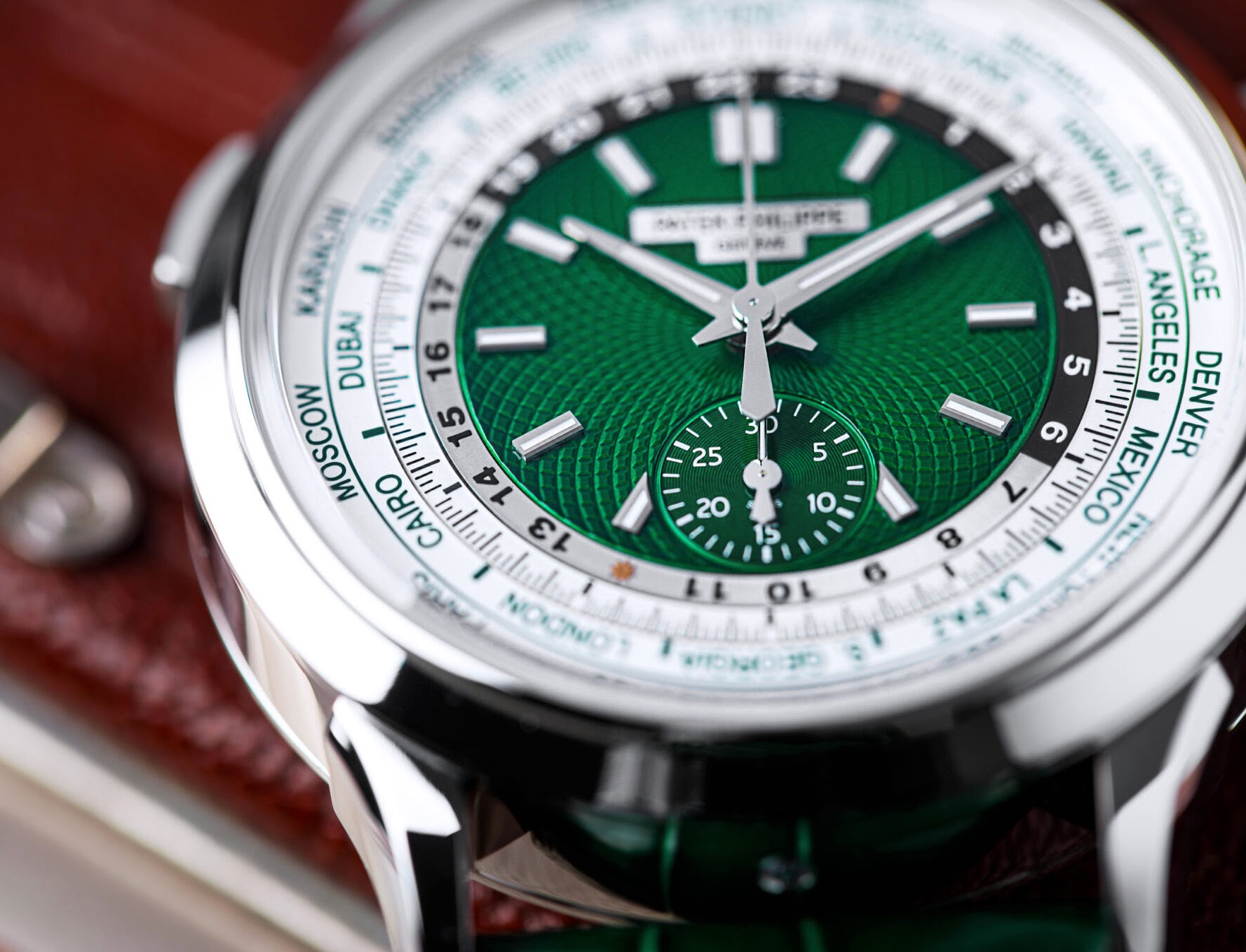 Overall, it is quite legible and easy to use. Usability is enhanced via the luminous fill on the applied indices and dagger-style hands. The chronograph seconds hand is central, above the hour and minute hands. The 6 o’clock sub-dial indicates minutes accumulated by the chronograph. The chronograph is triggered with the pushers that flank the crown, with the added benefit that one can reset the timing on the fly. In other words, we don’t have to stop it, reset it, and then start it again — just reset and things keep running.
The third pusher at 10 o'clock on the platinum case of the Patek Philippe World Time Chronograph 5930P increments the world time display by one city for each press. While the watch may look intimidating at first glance, it’s quite intuitive, and we can quickly acclimate to the workings of the watch. 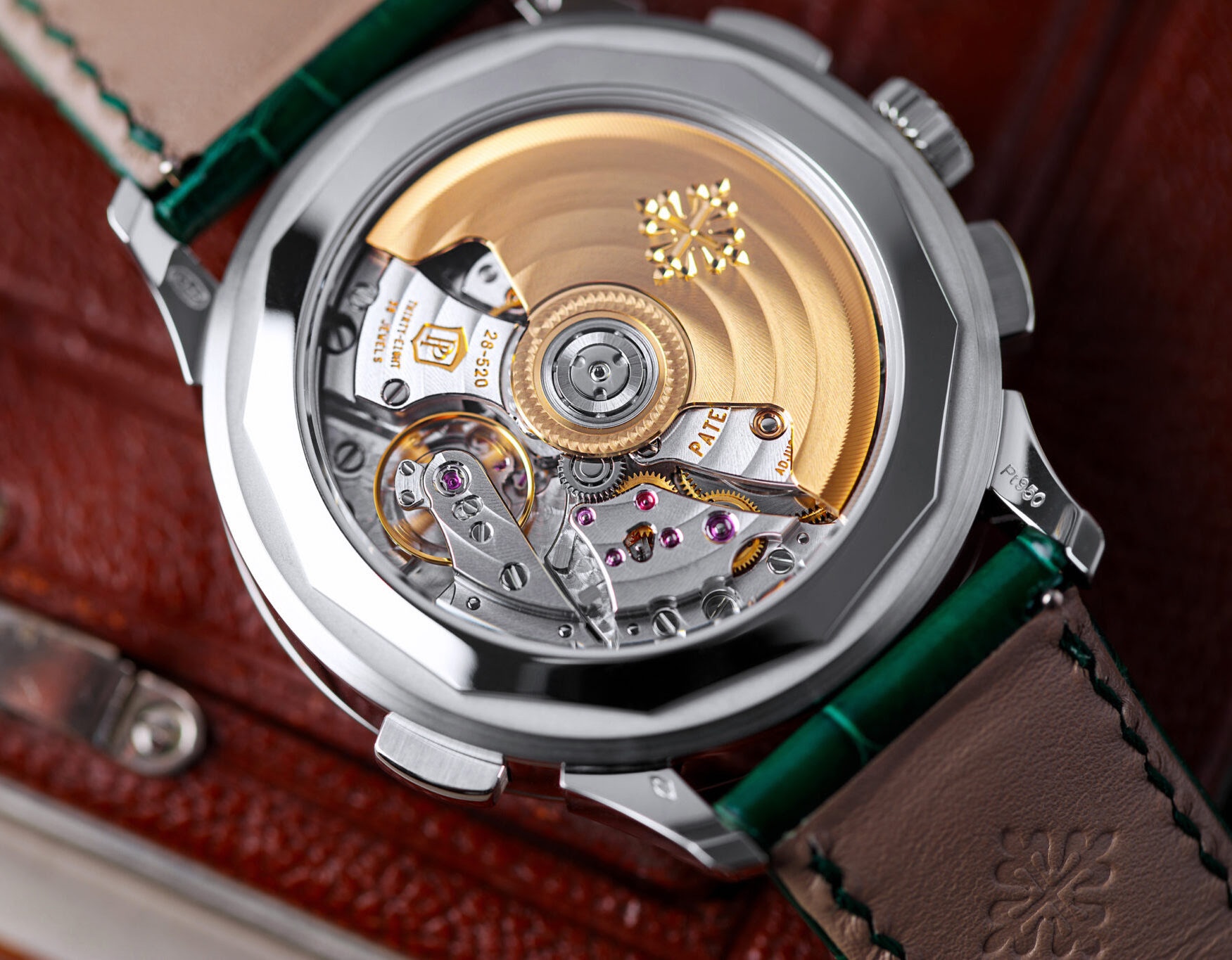 Inner Workings
While design goes a long way towards making this watch easy to use, do not under-estimate the importance of the Patek Philippe 28-520 HU caliber. This is an automatically-wound movement that provides a 48-hour power reserve while running at 4 Hz frequency. Of course, it also provides the world timer and chronograph functionality. Much of this is visible via the exhibition caseback. 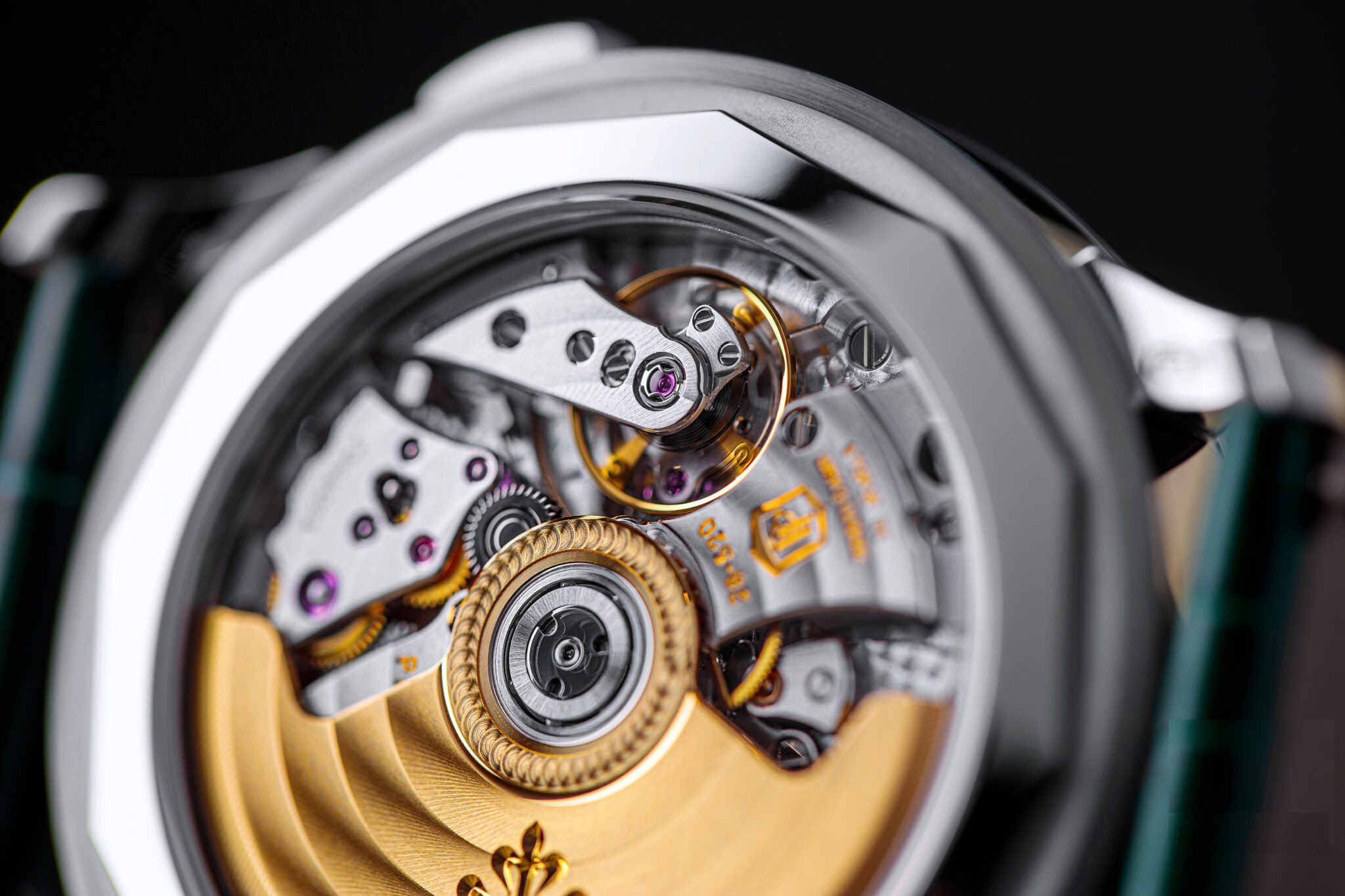 The chronograph hides an interesting tidbit. We touched on it above when we mentioned resetting the timer on the fly. This is due to the movement relying on a vertical clutch. This means we can leave the chronograph going and use the chronograph seconds as a running seconds hand. In a regular chronograph, that might bring a whole host of concerns, such as wear-and-tear on components and running down the power reserve. 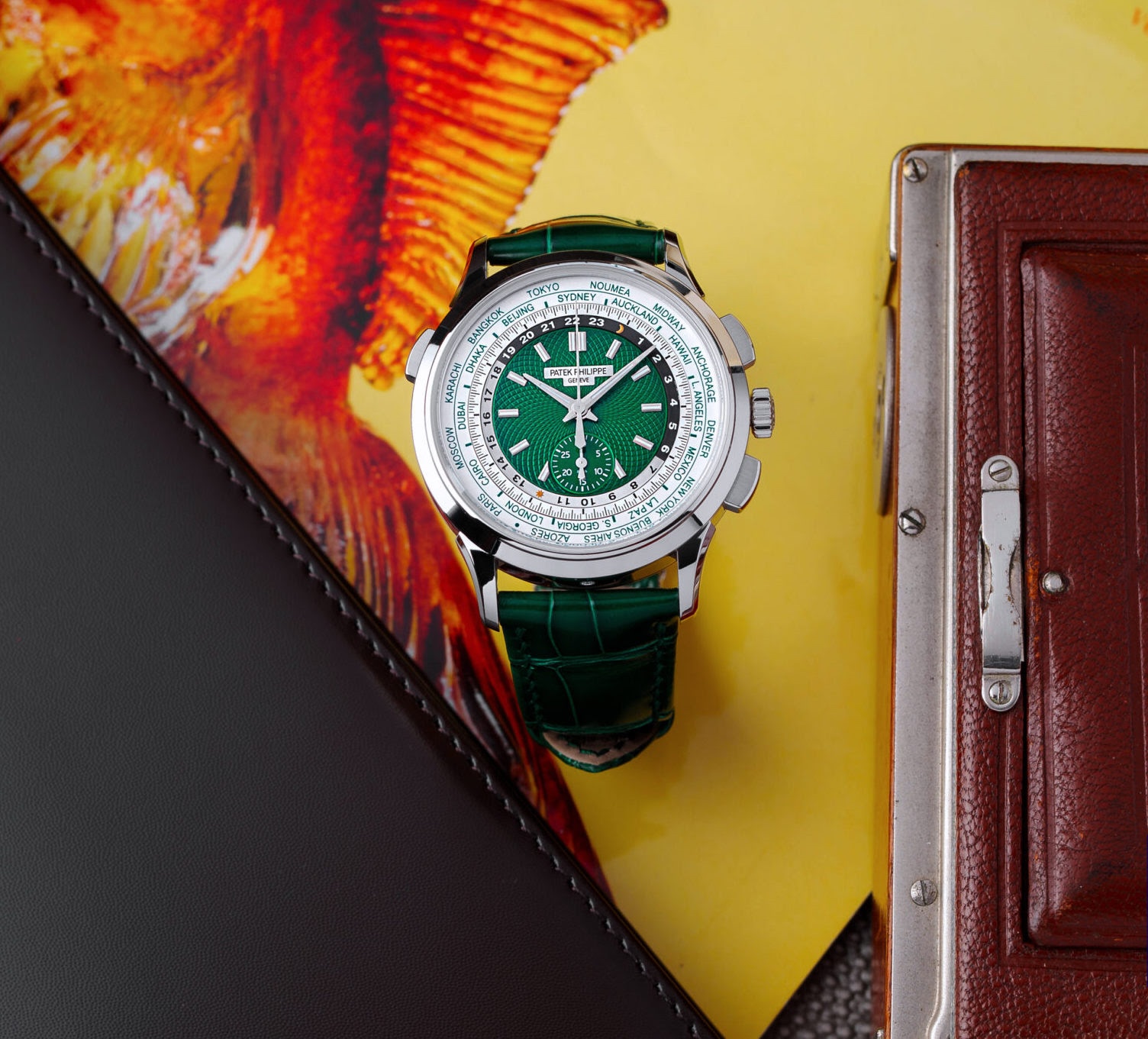 Versus The Competition
Since Patek Philippe has been making world timer watches with the world cities for 85 years now, the most obvious competition would be from within their own catalog, with a watch such as the Patek Philippe 5131P. However, one can certainly cast a wider net.
While it omits the chronograph functionality, A. Lange & Söhne's Lange 1 Time Zone keeps world timing front and center. It has two time indications (local and home); each with their own day/night indicator. Additionally, as we’re setting the "home city" we're tracking (via the arrow between the 4 and 6 on the subdial), an indicator tells us if that city observes daylight savings time or not. It’s a clever touch; just one of many packed inside that watch. 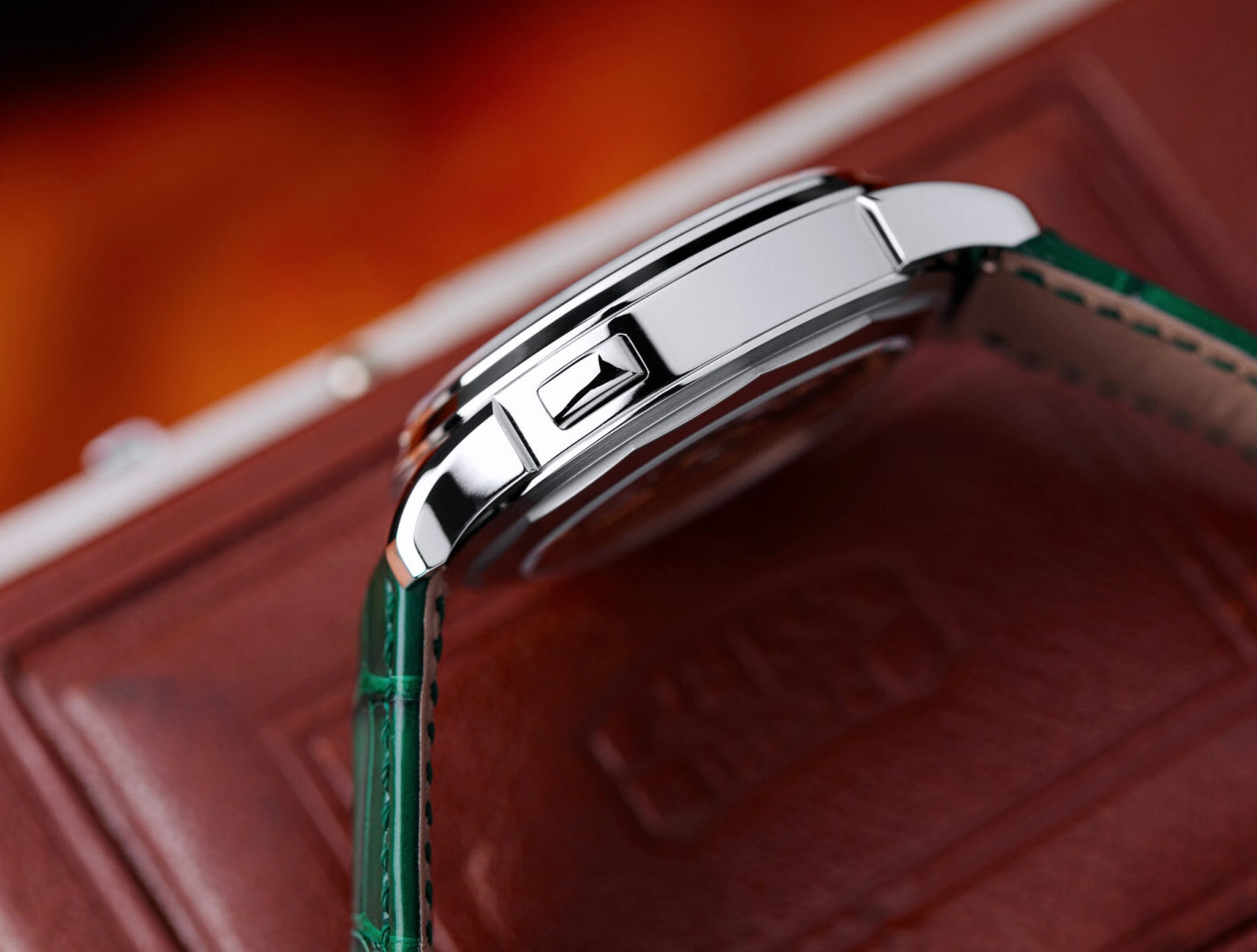 If, on the other hand, we want our world timer to be a bit less subtle, then the Richard Mille RM63-02 is where we would direct our attention. For all of its bright colors and bold design elements, the world time function is deceptively elegant. To adjust things, we simply use the bezel to align our local city to 12 o’clock, and everything else moves into place, including the hour hand. Hard to beat that for ease of use! 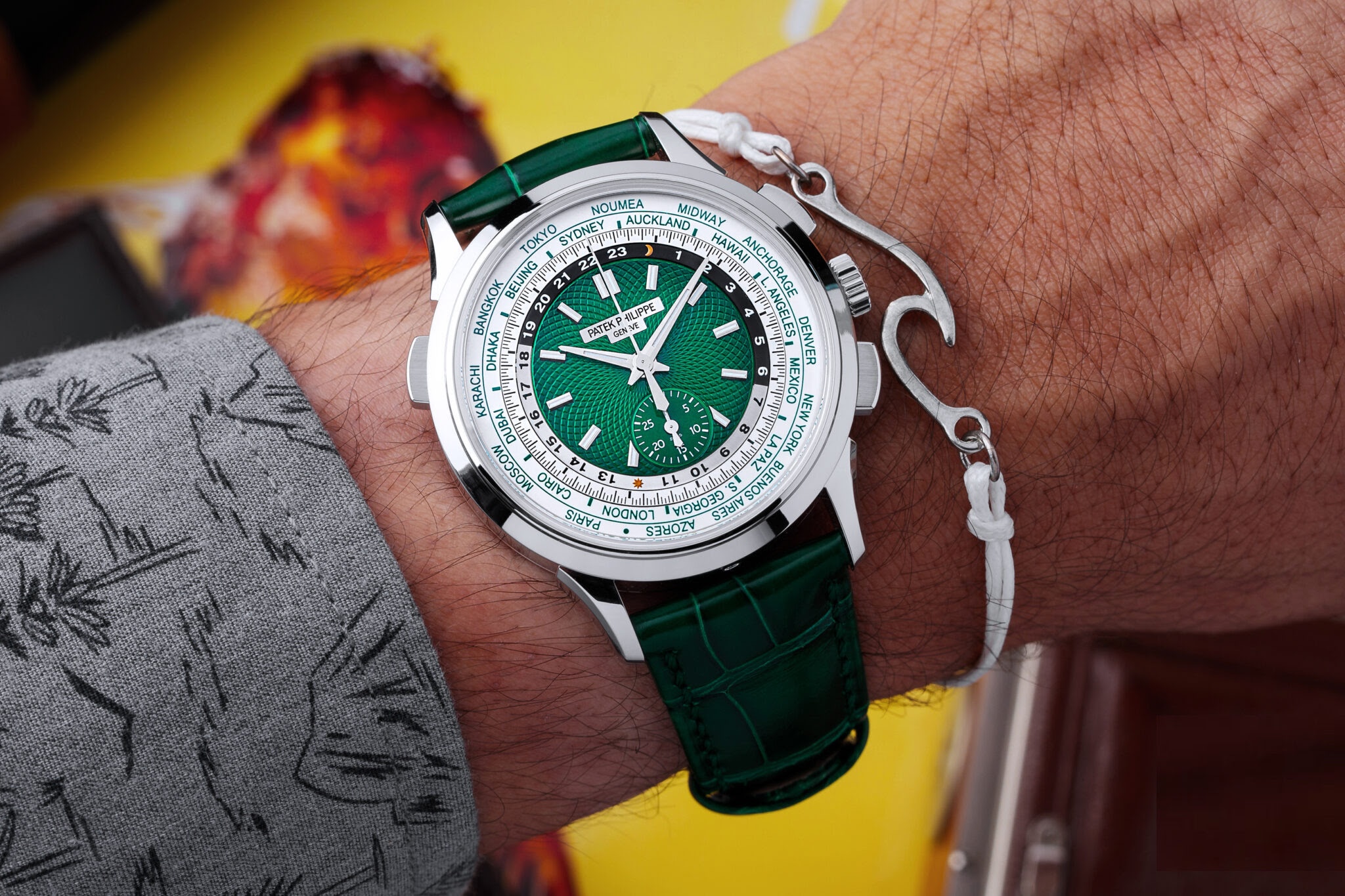 Personality
When we consider Patek Philippe and its watches, we no doubt have an idea in our minds of the personality of the watch (and its owner). Their world timer line tends to break that mold a bit, with its enamel world map dials. While there’s no enamel here, the guilloche dial still has that touch of artistry to it that sets it apart from other dials. 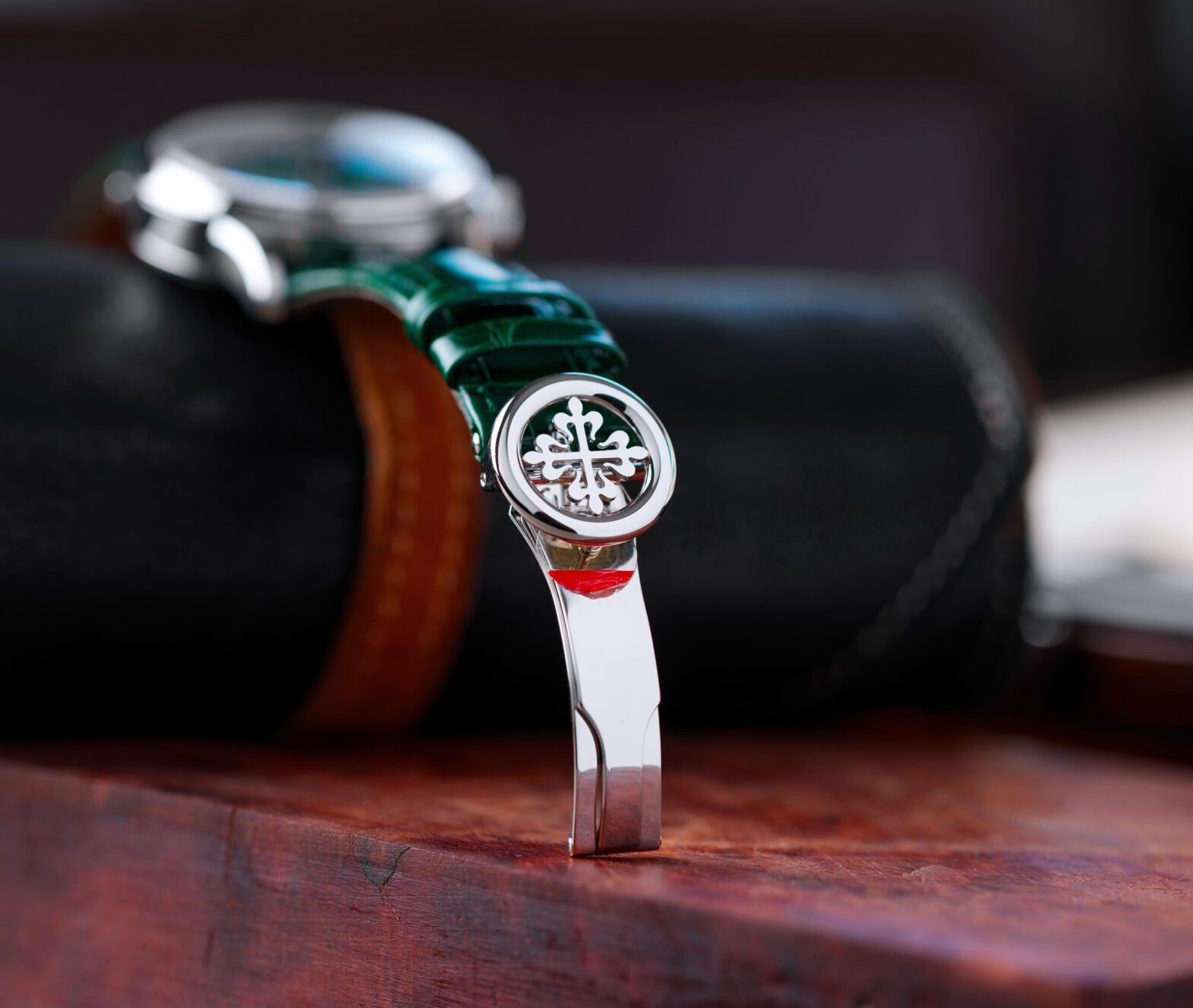 The Patek Philippe World Time Chronograph 5930P is about being on top of the time in our life. Not in control of it, no, but being able to track it minutely. Between local time, world time, and chronograph timing, this watch lets us watch the passage of time as we wish.
Final Thoughts
While a number of luxury watch models have gone the path of moving away from precious metals and towards steel, Patek Philippe bucks that trend. The original Patek Philippe World Time Chronograph 5930 came in a lovely white gold, and for this release, upped the ante by going with platinum – denoted also by the small diamond set between the lower lugs.
All in all, this is a watch that certainly defines elegant simplicity. Yes, what the movement is doing is anything but simple, particularly with the combination of complications put together here. And that’s not even to mention how compactly it is done, allowing for a relatively thin watch. For all of that, the dial is still crisply legible, and actually interacting with those complications is clearly handled via the pushers on the case. For all of the complexity, the actual use is simplicity itself.  That simplicity is then wrapped up into an elegant luxury watch that will be more than happy to travel the world, no question about it. 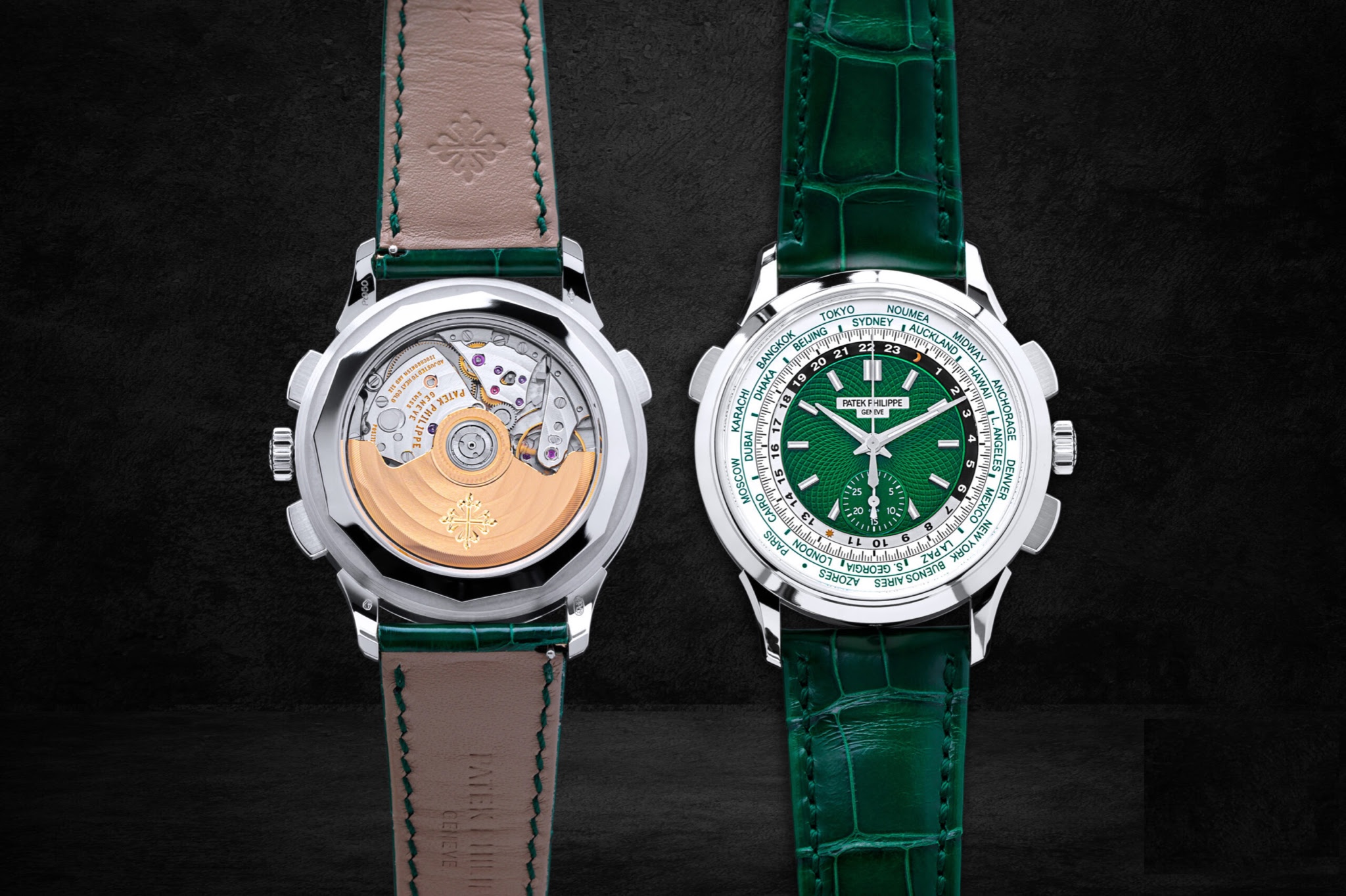 * Content Partner
European Watch Company in Boston has helped tens of thousands of collectors buy, sell and trade desirable watches for nearly 30 years.  One of the finest full-service retailers in the US, they maintain in-house restoration and servIce facilities and a dedicated team of photographers.

By: cazalea : September 3rd, 2022-15:31
Patek Philippe World Time Chronograph 5930P Review When we travel, we are usually concerned with the time where we are. If we need to stay in touch with other parts of the globe, a GMT or World Time complication is handy. Putting those two together is not...
login to reply

By: Cpt Scarlet : September 1st, 2022-08:06
Without doubt the 5930p is a stunning piece. I had the opportunity to view and try it on in person. The green hand-guilloched dial center is just as vivid as in the photos.
login to reply

Not a fan of green watches but that's pretty nice.

By: bsandovalb : September 1st, 2022-16:18
with OUTSTANDING pics... this line is by far my favorite among PP offerings, it just reminds us how complex still can be simple, if that makes sense, and they have charm and character... the layout of this World Timers is exquisite... thanks for posting!
login to reply

Interesting history of a WT time dial. Thank you.

By: COUNT DE MONET : September 1st, 2022-16:43
This version is quite a pretty, pretty watch. I was not so impressed by the blue one, than with this green edition. Very classy watch.
login to reply

Thanks for a great post with lovely photos and contents !

By: GLau : September 1st, 2022-16:59
I saw this bright green worldtime “monster” in the metal and the dial is very eye 👁 catching ! Love admiring it but this green is too bright for a subtle guy like me. 😅
login to reply

Maybe if there was some cloisonne somewhere ...

I never expected Grand Seiko to be this nice….

By: Clueless_Collector : September 1st, 2022-19:20
Patek Philippe should be worried 😂 I have mixed reviews in my head now, cannot wrap my head around Mike reviewing this 😵‍💫
login to reply

By: cazalea : September 1st, 2022-19:47
but I'm a team player and can appreciate any brand, even if I don't own one. Last time I checked I had about 40 brands represented in my collection, not counting pocket watches. Mike
login to reply

You’re absolutely a team player and a great collector…

By: Clueless_Collector : September 1st, 2022-20:50
Unlike me who is clueless and an enthusiast or opportunist 😬
login to reply

By: Mr.Gatsby : September 1st, 2022-19:53
But settled for a golden ellipse in platinum instead. Nice looking piece. Best Gatsby
login to reply

Funny, I was on to buy one last summer. I offered a trade plus cash, and it didn't work, at the end...

The modern platinum GE, or an older/vintage model?

Ah, sorry it didn’t work out that time.

Well, I have the 5110P, and was tempted to have a reference with a chrono function, indeed.

Great review. The rationale in this watch is its 2 complications. Blended into 1 watch. Wonderful picture, tfs. 😊

A beautiful combination, this one. Thanks for the report.

Thanks for the detailed review.

I think you have chosen your strap very well. Elegant and sporty. Congratulations.

By: Blue and White : September 3rd, 2022-10:28
…on a wonderful watch. That bold shade of green and the guilloche dial really make a difference.
login to reply

Did you know? The guilloche pattern

By: Patek_Nerd : September 3rd, 2022-13:23
is not 100 % symmetrically on every watch. On some watches it is slightly twisted. This dial (taken from official Patek picture) shows some details. Please take a close look at the pattern at 12 o‘clock. It is not exactly in the middle position. For compa...
login to reply

Awesome! The review and the watch!

By: bobernet : September 4th, 2022-02:15
I have the G, and really enjoy the aesthetics and the combination of complications. A great travel watch for someone who can use more than just a “home time.” ...
login to reply

Interesting review. I am not sure we can consider the Lange One Time Zone as a contender as it is not a World Time. And as we speak of contenders...

By: amanico : September 4th, 2022-09:00
We should mention two companies which added the chronograph to the world time ( a rare combination, by the way ) . Jaeger Lecoultre, with the Extreme World Chronograph, since 2006, which means 10 years before the release of the 5930G( ! ) and with the mor...
login to reply