Most of you know that we just celebrated the 20 years anniversary of watchprosite (formerly called PuristSPro Forum), but did you know that Kari Voutilainen established his business as an independent Artist Watchmaker in the village of Môtiers in 2002?

Actually it is now 20 years since Kari Voutilainen created his own independent watch brand; the founder is on top of the world – both literally and figuratively.

Literally, because his manufacture is now settled in its new quarters at the top of the Chapeau de Napoléon (Napoleon’s Hat), an eyrie perched on a cliff at an altitude of 960 metres, with an eagle-eye view over the Val de Travers in the Swiss Jura mountains. And figuratively, because his watchmaking is at the pinnacle of aesthetic refinement and mechanical perfection.

At the occasion of this 20th Anniversary Kari organized a small celebration and I was happy to go and visit his new Manufacture. 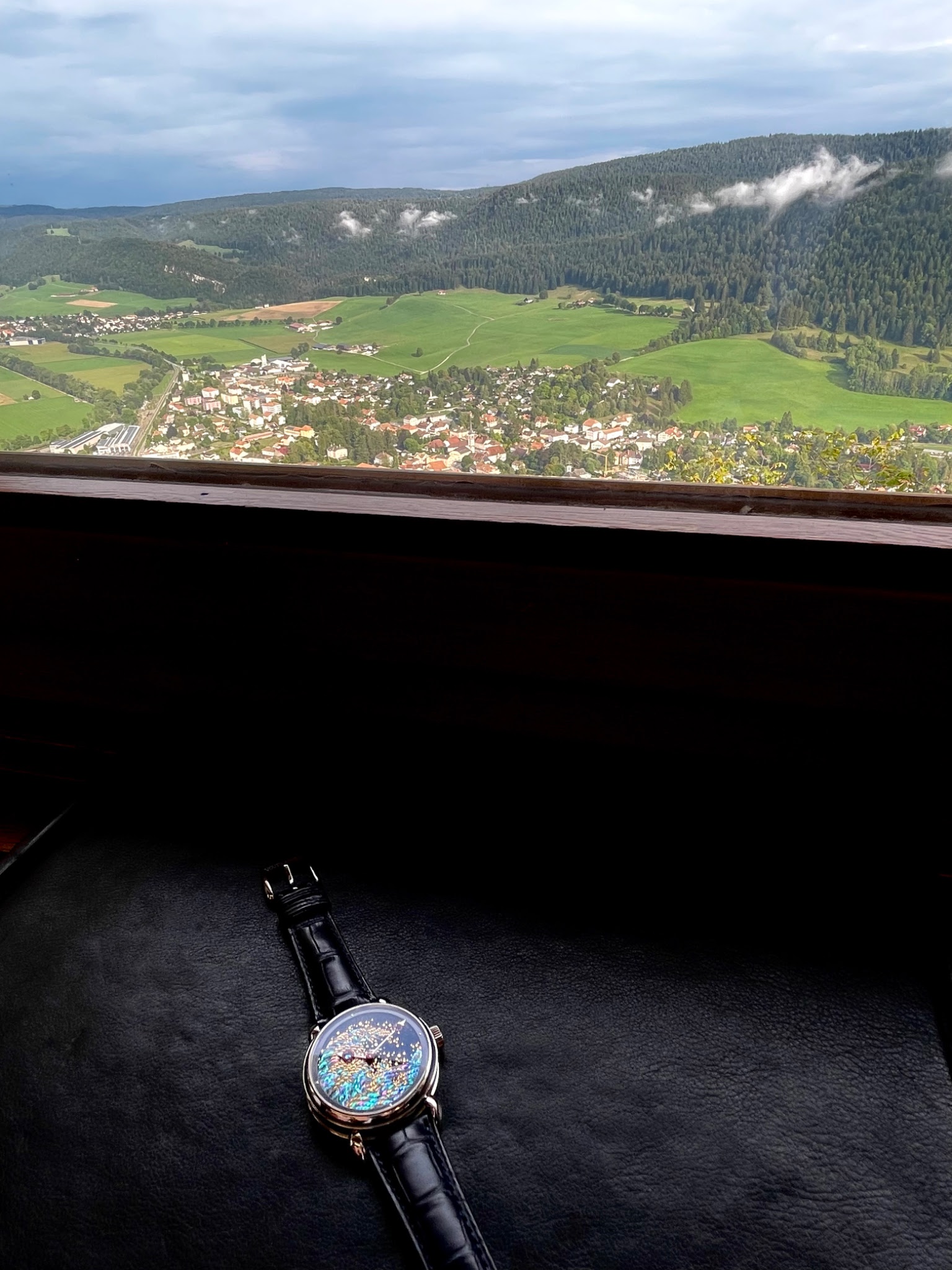 Let’s first start with the origin of the project: in the 1990’s Kari was in his late 20’s and was working in the very specialized restoration atelier of Parmigiani where he was able to examine many unique examples of tourbillon pocketwatches, perpetual calendars, minute repeaters and all kinds of mechanical wonders. During the evenings after work, Kari would go to his workbench at home and continue working on his own watches. It is during this working period that he created his first tourbillon pochetwatch dated 1994. It hold the seeds of what would later develop further into the full-fledged expression of his approach to watchmaking, the fusing of classical traditions with new and contemporary impulses. 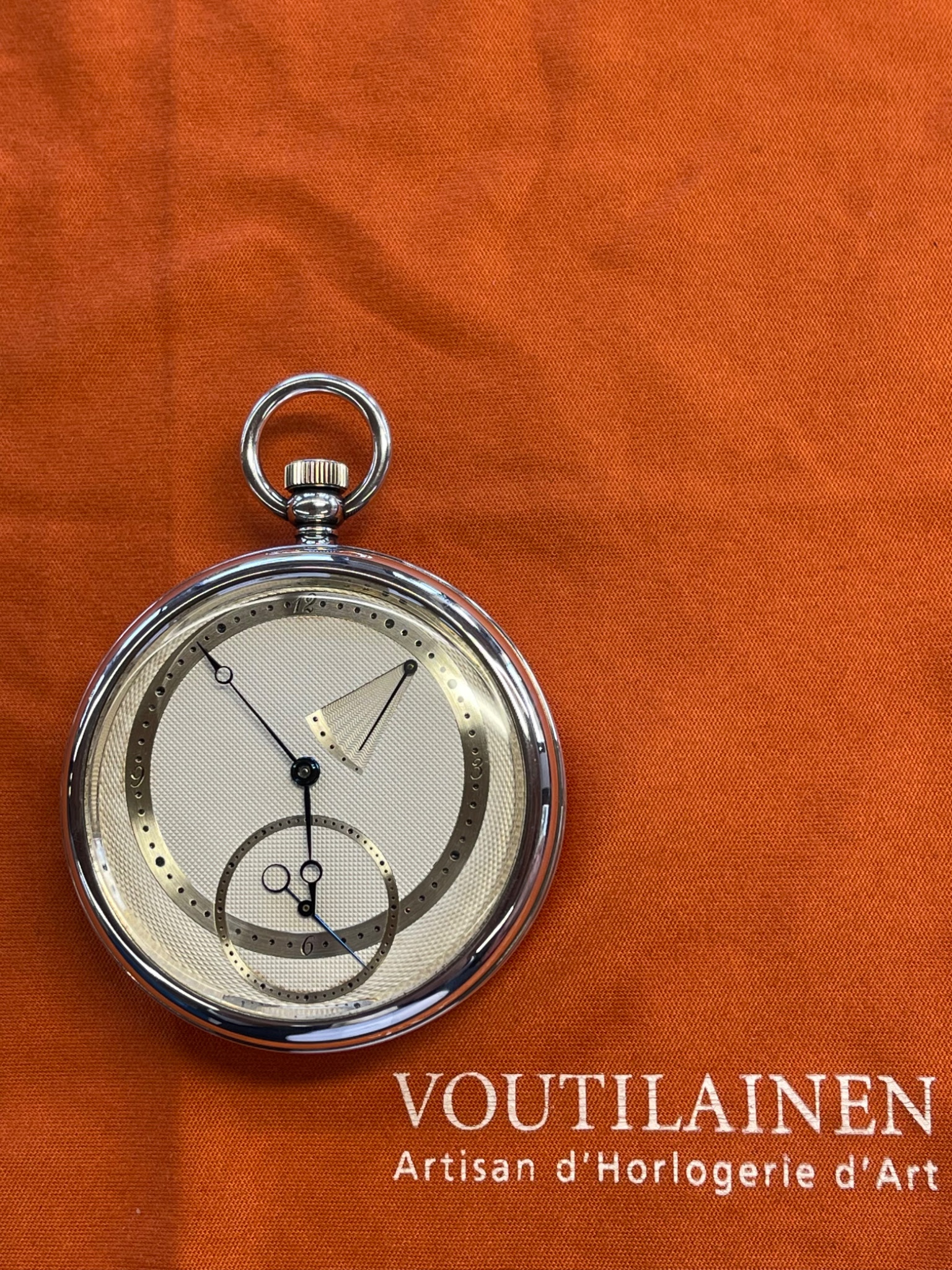 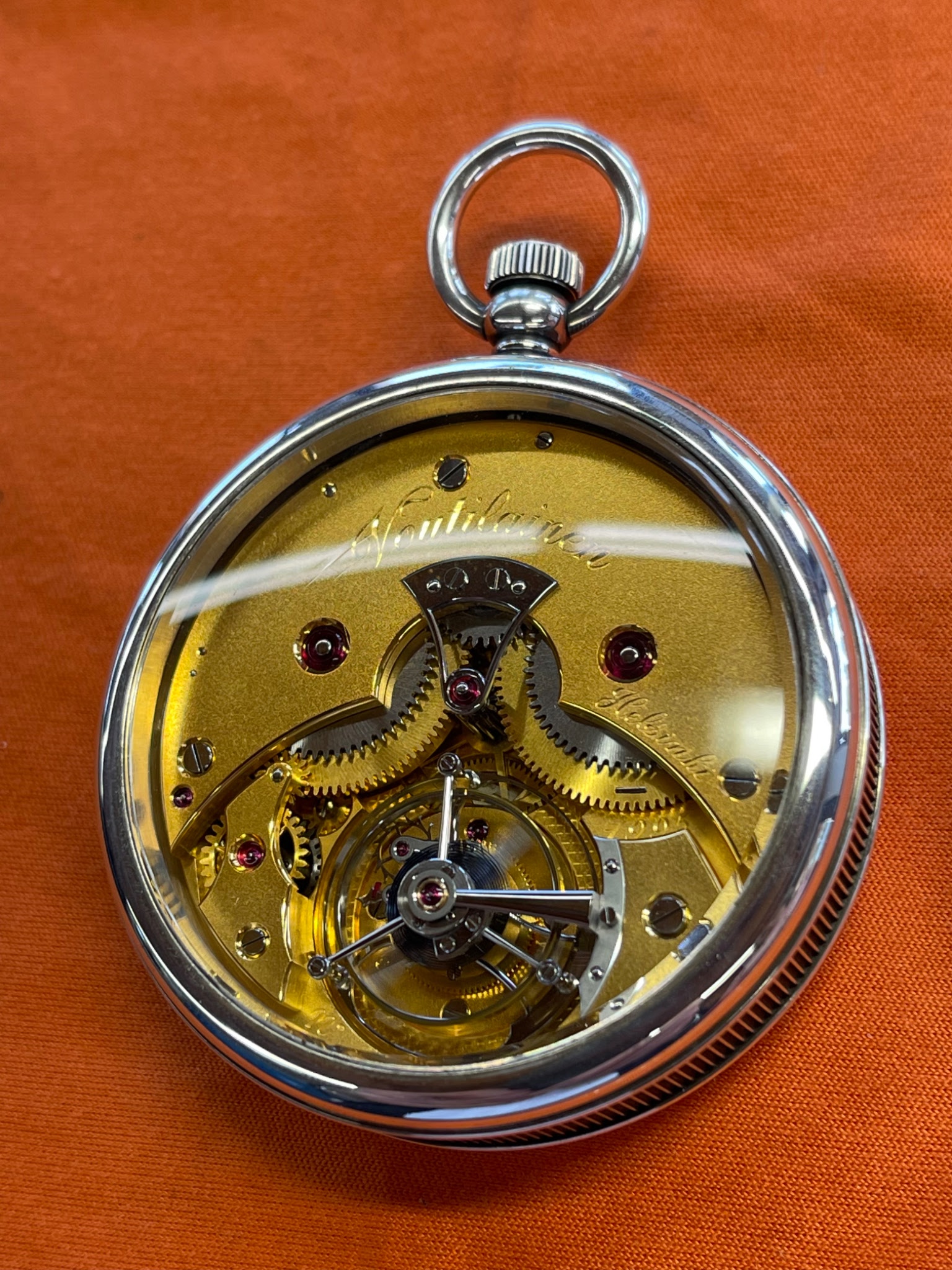 But of course we could also admire some modern creations, several Twenty-8 specimen with superb guilloche dials made in Comblemine (the dial manufacture owned by KV) but also two « piece unique » specimen that I am happy to share with you here…

Both are the result of a collaboration between Kari Voutilainen and the studio of Tatsuo Kitamura. His studio, one of the greatest lacquer studios of Japan, creates works of lacquer art that stand at the pinnacle of Japanese tradition, bringing a craft that has existed for hundreds of years into the present, exemplifying the passion to preserve the soul, spirit and identity of traditional Japanese culture as expressed in the Edo period.

Let’s have a more detailed look now at two of these masterpieces: their dial is a real work of art, both using different techniques:

The first one is using the technique of lacquering with Saiei Makie and takes many months of work to complete. The raw materials for its creation are: Kinpun (gold dust), Jyunkin-itakane (gold leaf), platinium leaf, Yakou-gai (shell of great green turban) and black lacquer. “The work involves assembling delicate and fragile wafers of shell, with their abundant colourful, dancing reflections, with pieces of metal – gold or platinum. The contrast between light and shade creates an incredibly rich three-dimensional visual effect that alters depending on the angle of view, replicating the traditional techniques of saei-makie or somada-zeiku, named after the Kyoto craftsmen who invented them in the 17th century.” as connoisseur Masahito Hayashi explains. 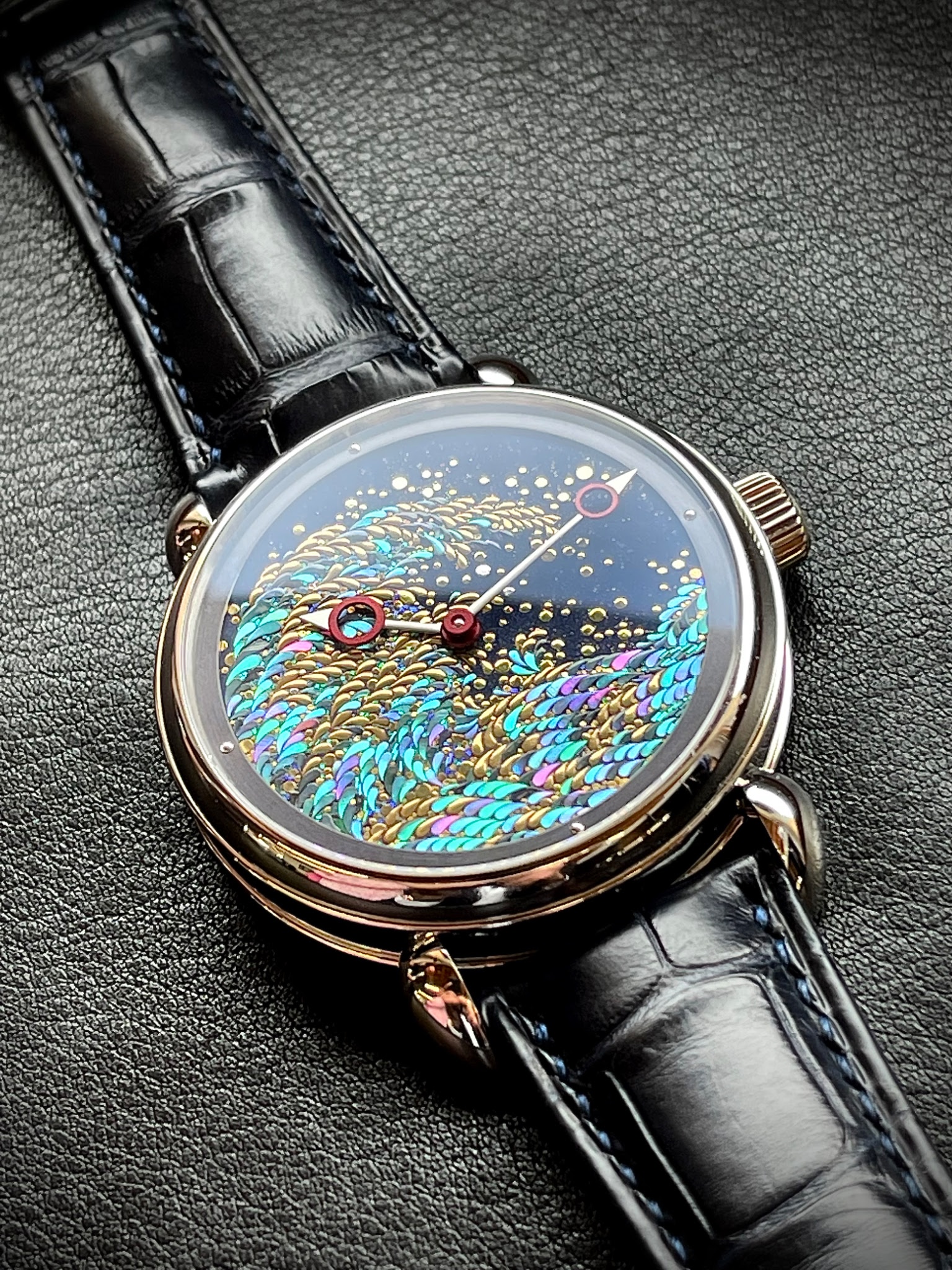 As for the second one, Kari gave the Japanese master artisan Tatsuo Kitamura carte blanche to create the inner dial of the Universal Hour. A recess 3/10 of a millimetre deep is created in a plate of white gold, and a thin layer of natural lacquer is deposited inside. This natural lacquer is then decorated and hardened in a wood-fired kiln. After that, the marquetry and all the decorative elements are assembled. The piece is polished and lacquered once again. And then more elements are added to complete the piece.

Each fragment of shell in the natural colours of the Yakou-gai (great green turban shell) or Awabi-gai (New Zealand abalone) is shaped and filed by hand. Given the spiral shape of the shells, they are impossible to machine, and only one piece in ten is usable. 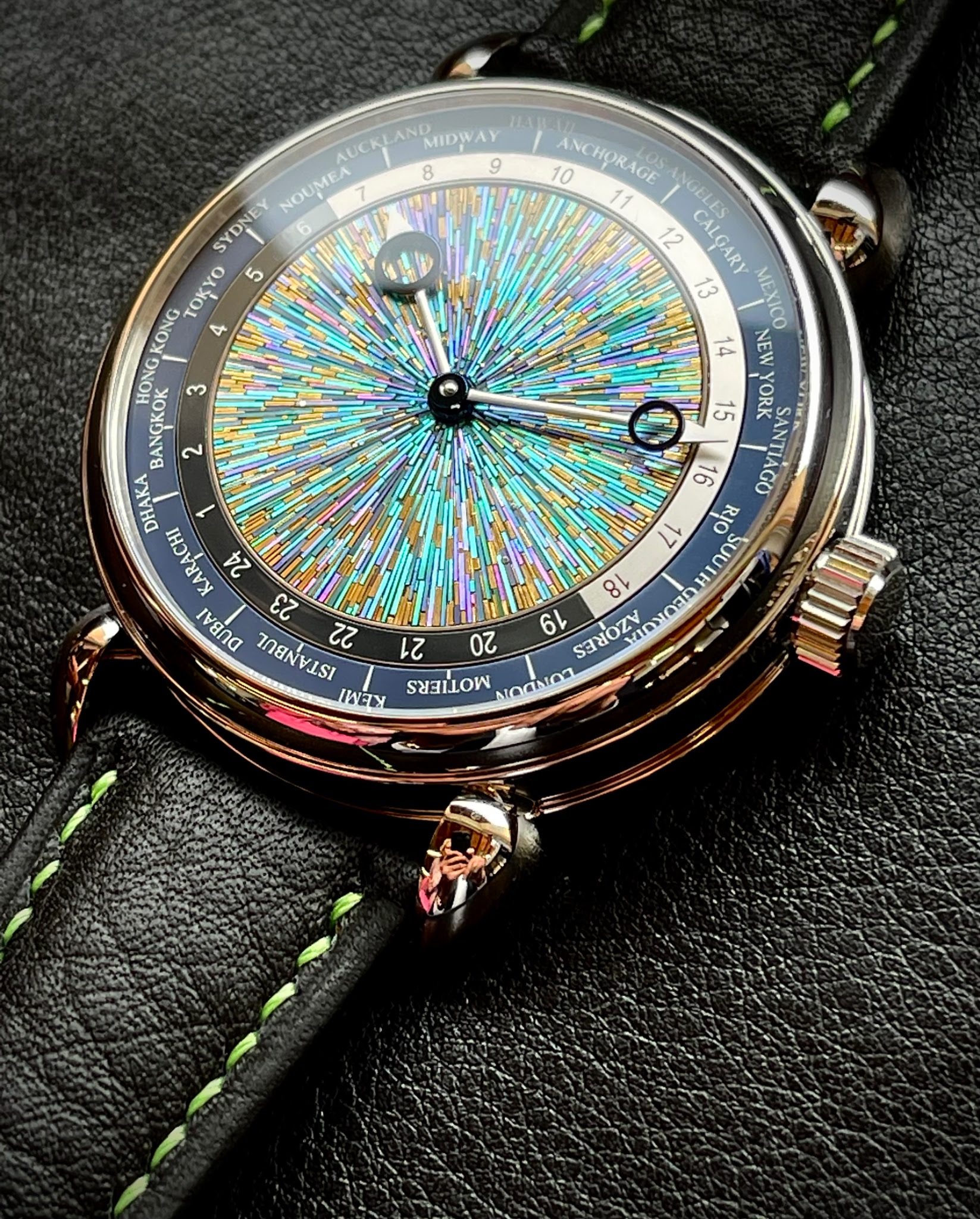 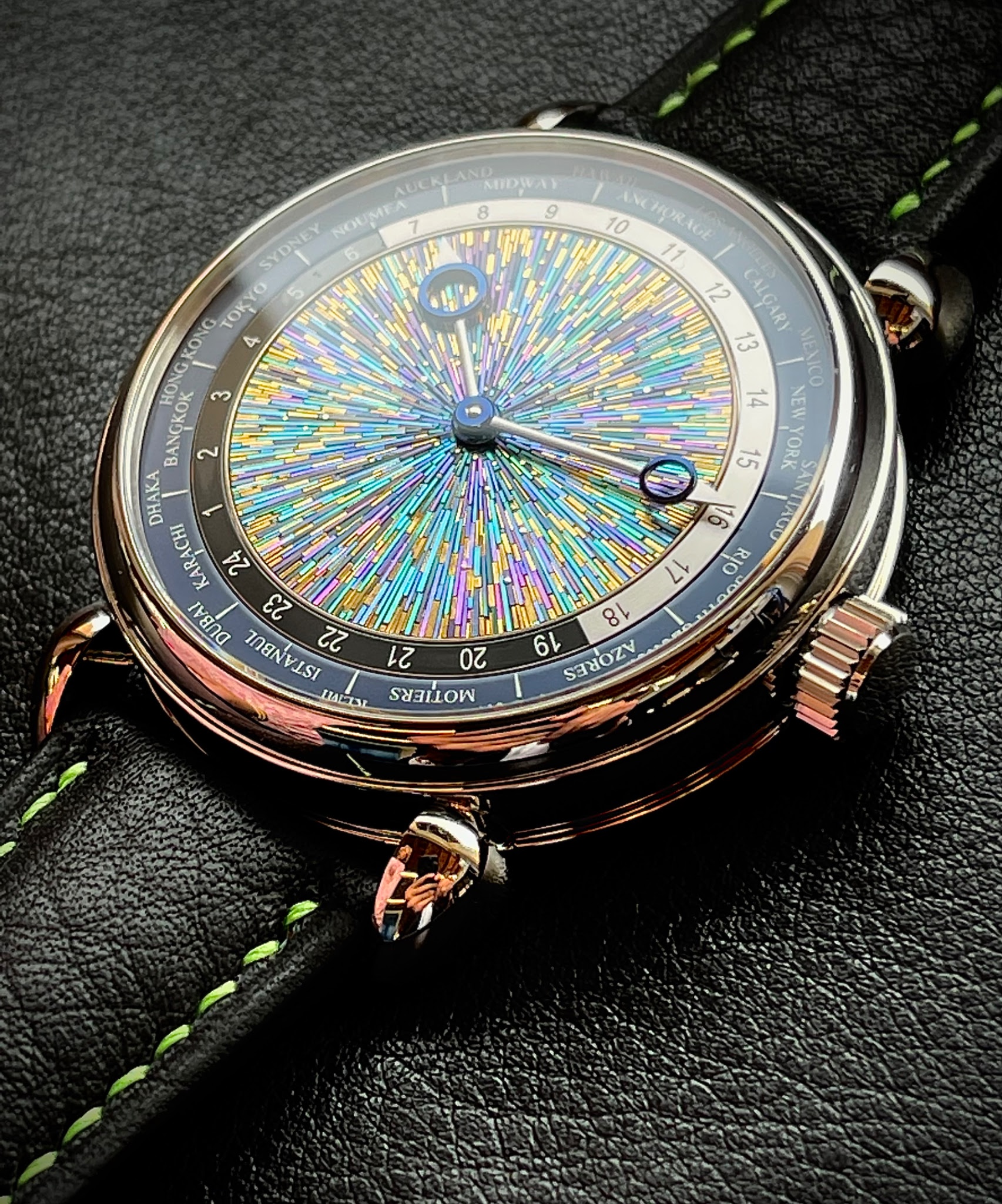 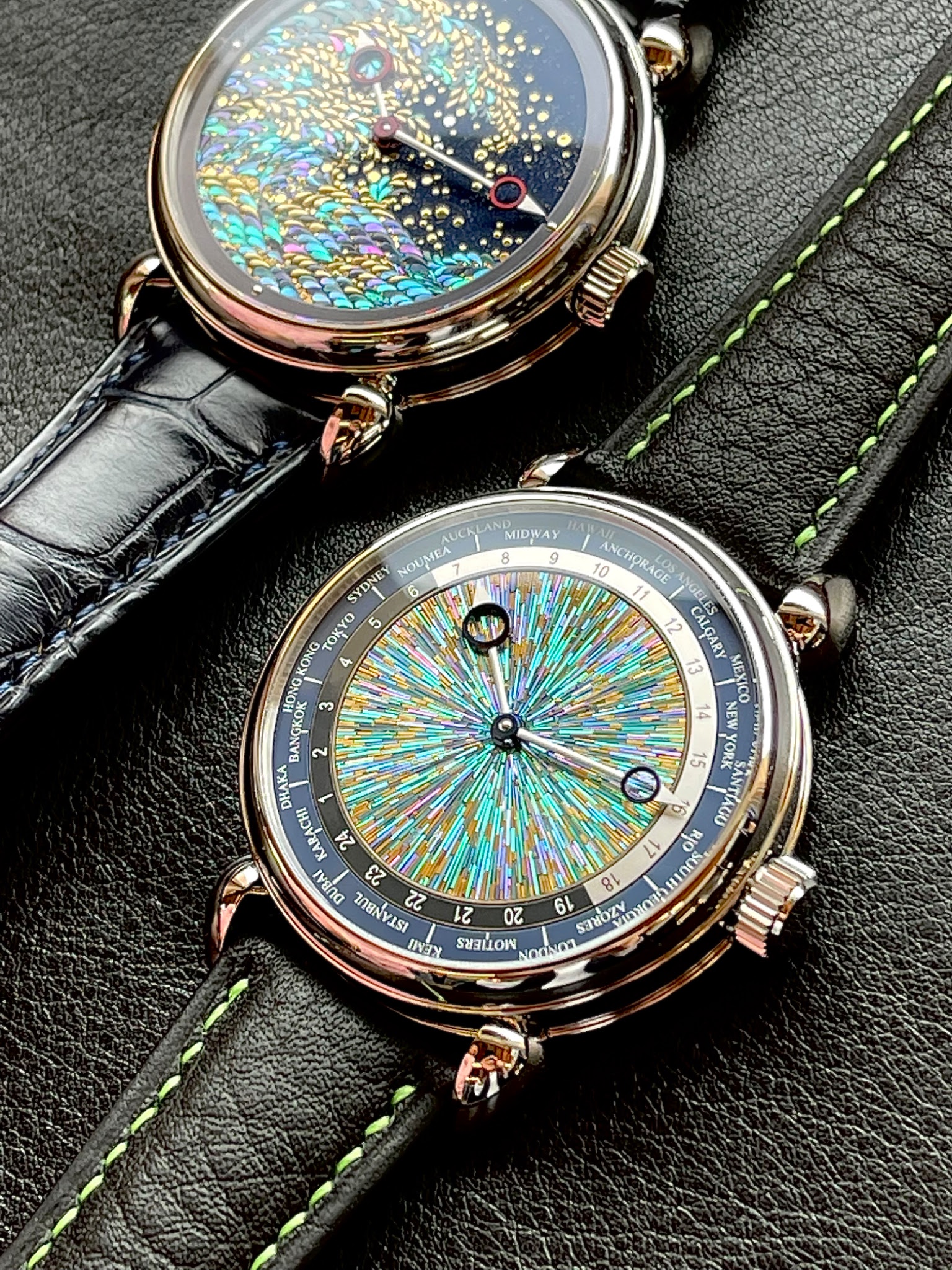 After seeing such marvels, we should not be surprised that Kari Voutilainen got a record eight GPHG Awards to his name (Grand Prix de l’Horlogerie de Genève), the first in 2007 and the most recent in 2020. I focused here more on his latest piece unique watches but obviously there would be so much to say also on the breathtaking finishing on his in-house calibers!

By: Mike H : September 19th, 2022-01:01
Most of you know that we just celebrated the 20 years anniversary of watchprosite (formerly called PuristSPro Forum), but did you know that Kari Voutilainen established his business as an independent Artist Watchmaker in the village of Môtiers in 2002? Ac...
login to reply

Thank you Mike for sharing!

By: sham1 : September 19th, 2022-01:40
Kari is for me the best of the best - he is the watchmaker's watchmaker and his humility is second to none. Kari, if you are reading this - may you have at least another 20 years of success!
login to reply

I could not have said it better my friend 😉

So those are the wps 20th anniversary watches then? 😁

By: TeutonicCarFan : September 19th, 2022-01:55
This is the best modern watchmaking. In my head always the tops. There are others, but for me would be happy with a KV. Plus he lends his services to other projects as well. Honestly, other than a KV the only watch I'd want is a rexhep rexhepi CC (this is...
login to reply

I am sure. Thus far i never had the privilege to view in real life.

Those are absolutely insane

Why not opening the discussion with Kari if you are seriously thinking of it ?

Hah, it would be the first vout for me, he's got a lot more loyal customers that are deserving

By: Dchang81 : September 20th, 2022-16:13
Been kicking tires for the past year going through designs with a dealer but it's a huge amount of money for me, so haven't pulled the trigger
login to reply

By: patrick_y : September 19th, 2022-05:07
I unfortunately didn't get to attend the event. But what an amazing 20 years it has been! A toast to Kari and a toast to the next twenty years!
login to reply

Thanks for the kind words Patrick

And I'm so glad that you were able to join and share with us!

By: patrick_y : September 21st, 2022-05:17
I only know of a couple other people who went, and they haven't told me much. Both are WPS members, but they're not frequent posters.
login to reply

Thanks for sharing, Mike

By: ik2000 : September 19th, 2022-07:09
As a fan of many types of japanese intricate artwork, the dials made in conjunction with Kitamura-san are the icing on the cake. It sums up the Kari aesthetic, and it 100% works for me. May he live to 150yrs old, and keep producing these masterpieces
login to reply

Thanks for sharing this great trip and occasion my friend

By: Watchonthewrist : September 19th, 2022-07:45
So happy i was part of the trip back in 2017 when we visited his old atelier and had a amazing bbq in his backyard. Hope to visit his new place when possible. Such a amazing and great yet humble person and incredible master watchmaker. Congrats dear Kari ...
login to reply

By: Mike H : September 20th, 2022-12:28
Kari did it again this time and I was so lucky to be there together with our friends Vianney H, Denis F, Max B, Andreas S and many others for a very private evening. Fantastic moments as you can easily imagine…
login to reply

Wow that sounds like another incredible memory and experience my friend .

Unique pieces with mesmerising dials. Thanks for sharing.

My pleasure ! Thanks for your kind words 🙏

Thanks Mike and HUGE Congratulation To Kari!

By: enjoythemusic : September 19th, 2022-13:31
i remember Kari's excellent writings on TZ during the early days of the web. Always brilliant, and always a gentleman too. Congratulations Kari, you've earned it
login to reply

Thanks Mike. Those dials

If the pandemic ever ends...

Great to meet you too!

Thanks for the kind words…

Many thanks, Mike! Others have already said it: He’s a legend—great watchmaker and a true gentleman! Happy 20th Anniversary, Kari!

I could not agree more !

Thank you for the beautiful pictures and for your nice account

By: ztirual : September 20th, 2022-16:46
Not quite Alexandre Dumas' Twenty Years After, only five, but none-the-less a real treat of meeting you again at Kari's. I have known Kari for some 16 years now and it has been really amazing to see how he's gone from strength to strength, building up wha...
login to reply

Congrats to Kari. What he has accomplished in 20 years should be highly commended as he is paving the way and helping other Indies along with their journeys as well 👏

By: GreatPilot@me.com : September 24th, 2022-22:01
My wife and I were fortunate enough to to meet with Kari at his wonderful/magical facility this summer. An unbelievable location, view and sooo special! These watches are incredible and incomparable to anything else (anywhere/anytime) with these dials. Th...
login to reply

thanks for this great write up MikeH !

By: mahesh : September 25th, 2022-16:55
I didn't know about this tourbillon pocket timepiece...he have mastered the guilloche quite young ;-) the world time dial looks so gorgeous, when I read the process of making it...that is a painstaking effort I just can imagine !! for what he creates, KV ...
login to reply