My previous post has been deleted; on our moderator Tick Talk's invitation, I give it a renewed try.

Reading through the French edition of Franco Cologni's "Les secrets de Vacheron Constantin" (Flammarion, Paris, 2005), I noticed something rather strange at page 318 (in "L'horloger", the book's last section, Chapter 3 "Le fabricant de cadrans" - "Le graveur à la main et le guillocheur"): a watch from year 1951 is described as having been fitted with a "Cadran argent frappé à index rapportés", which could be translated as "Stamped silver dial with applied indexes" (see pictures 1-2). 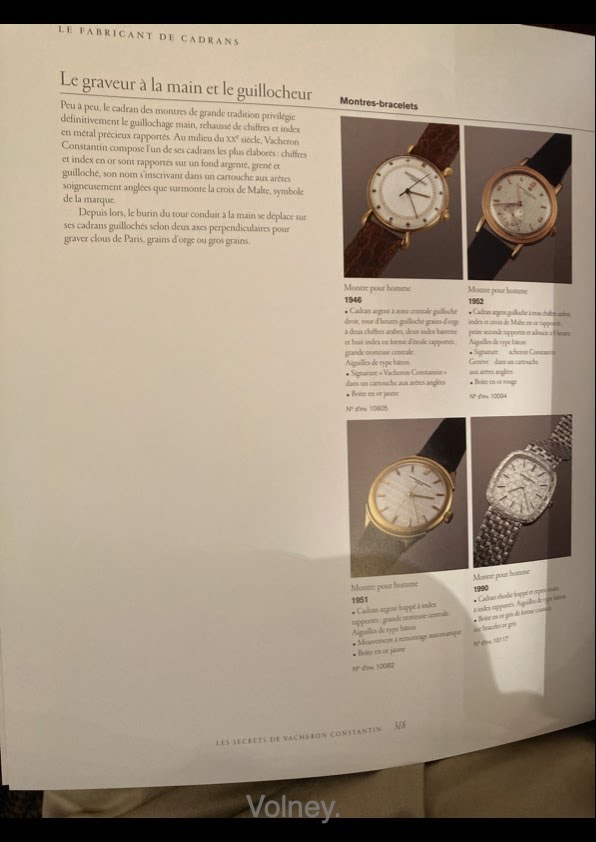 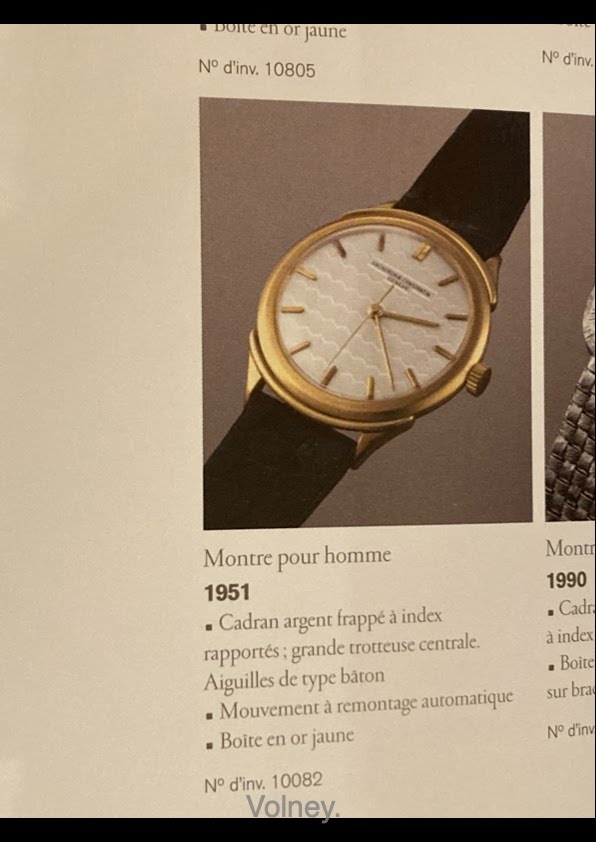 Picture 2: Detail from above featuring the discussed 1951 watch and its "stamped silver dial" as it is being described ("Cadran argent frappé").
I find this description as a "stamped silver dial" rather intriguing, as variations on this specific wave pattern can be found on several Vacheron & Constantin watches from the 1940s-1950s (see pictures 3-4-5), notably on the Ref. 4872 presumably presented by Zsa Zsa Gabor to Marlon Brando in 1954 (see picture 3) and is regularly referred to as a product of the guillochage technique. I personally have had the opportunity to handle the specimen seen on picture 5 and to observe the light reflecting itself on its dial: the depth and precision of the pattern, as well as the finish of incised surfaces rather evoked guilloché to me. 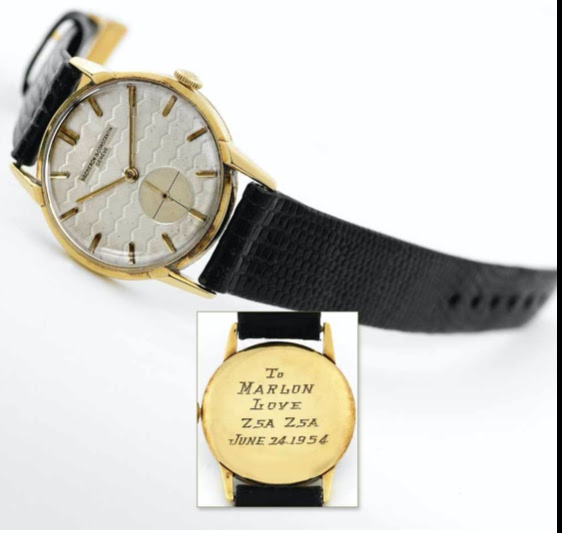 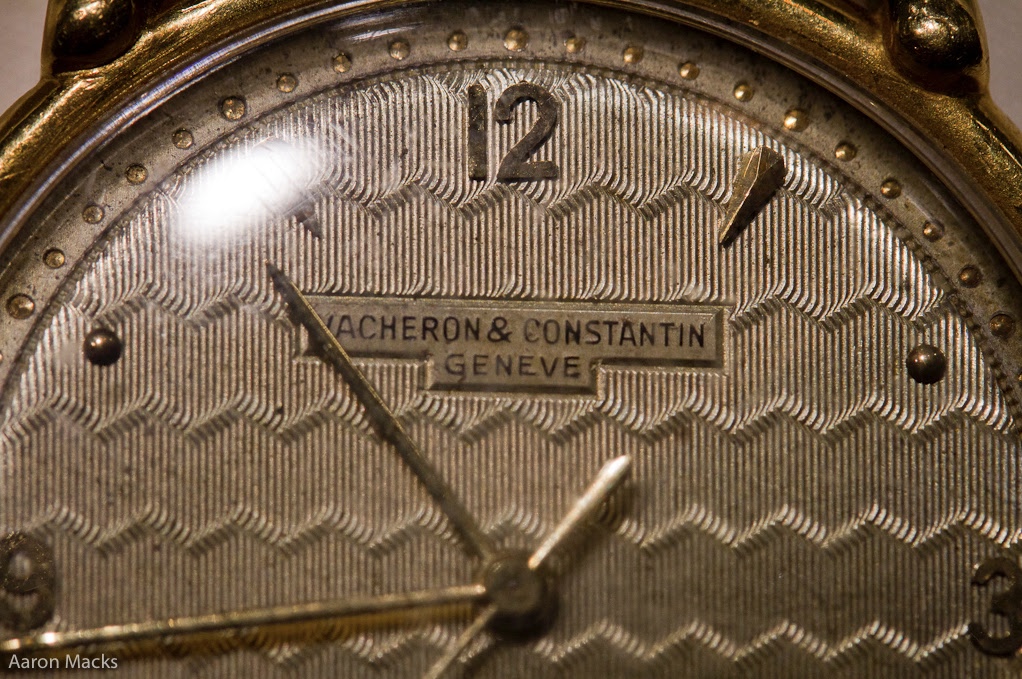 Picture 4: Detail of a variation on the same pattern on a larger dial fitted on a 37 mm. Vacheron & Constantin watch reviewed on WatchProSite by Aaronm on May 27, 2011 (" www.watchprosite.com "; Credits: Aaronm). 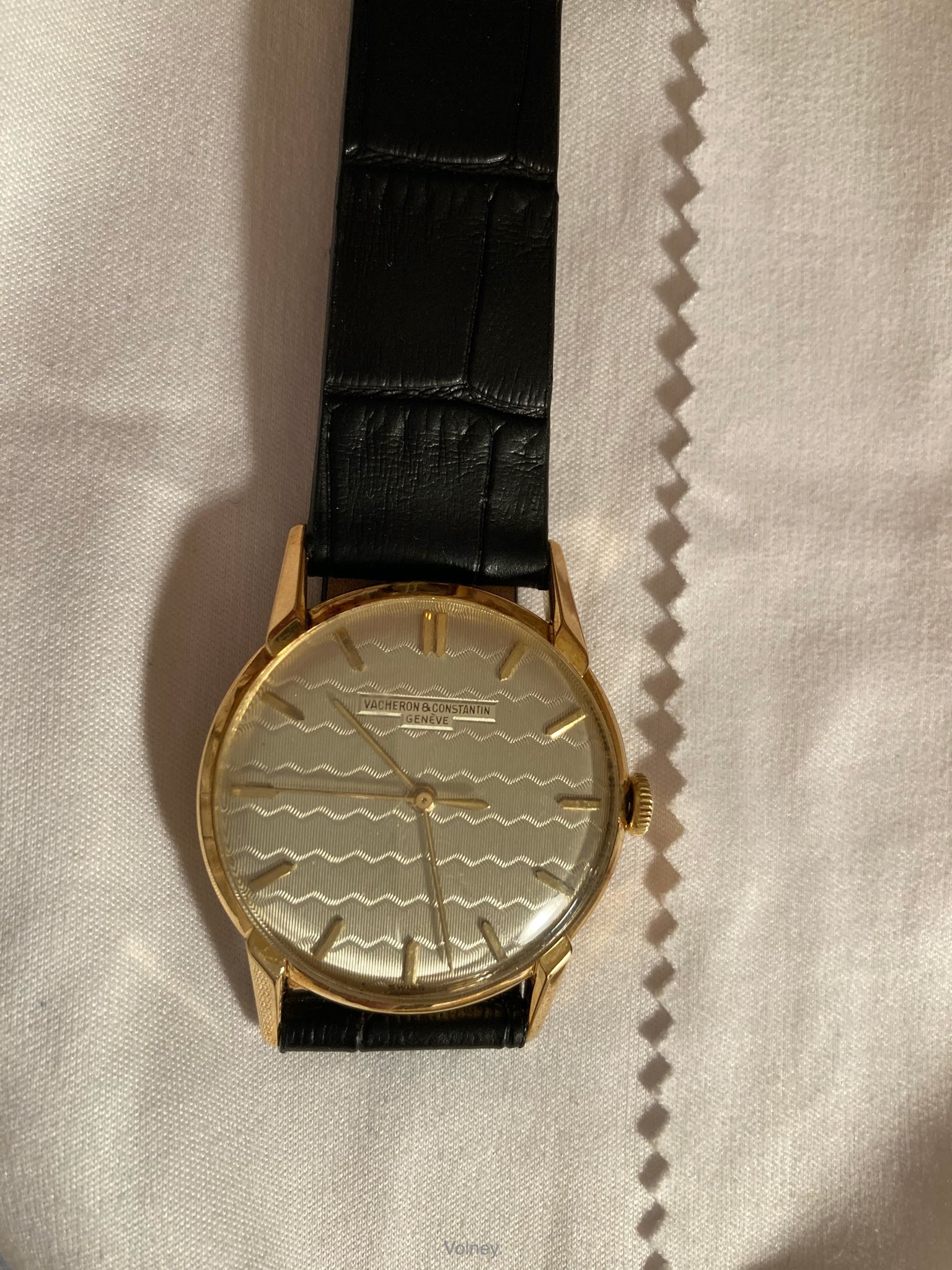 Picture 5: Vacheron & Constantin Ref. 4892 (Cal. 1002, with U.S. import mark ; private European collection).
I were curious to read about your opinions on this particular matter. Does it seem plausible to you that such a result might have been achieved in the 1940s-1950s through stamping techniques? Do you think dial-makers could have used both stamping and guillochage techniques alongside in order to obtain a similar pattern? Is the mention of stamping a translation error specific to the French edition of Franco Cologni's book?
Though this cannot - technically - be considered my first thread, I take this opportunity to thank the two members who wished me welcome here and who had received no answer yet because of the initial conversation's disappearance.
Volney.
login to reply
Comments: view entire thread

By: Volney. : January 13th, 2023-15:24
My previous post has been deleted; on our moderator Tick Talk's invitation, I give it a renewed try. Reading through the French edition of Franco Cologni's " Les secrets de Vacheron Constantin " (Flammarion, Paris, 2005), I noticed something rather strang...
login to reply

By: northcentralsouth : January 15th, 2023-20:11
I'm 100% certain that guilloche dials were not ever stamped. I love these watches more than any other and this was really what distinguished them from their competitors, at least up until 1955. The odd thing was for how short a span of time these watches ...
login to reply

By: Volney. : January 16th, 2023-18:39
Back in 2009, I was but a kid: but I would have enjoyed handling the Marlon watch. The rupture introduced by the small second in the dial's pattern is especially enticing to me. In my appreciation of a watch's dial, texture is key, and mid-century Vachero...
login to reply

By: Volney. : January 19th, 2023-01:23
We should inquire this further; as mentioned above, I am skeptical regarding the possibility of obtaining such results with stamping, especially in those years.
login to reply

By: Tick Talk : January 26th, 2023-16:03
while the possibility exists of an error in printing, I'm inclined to accept it as written. Frappé involves striking the dial between two dies and the design on the Ref 4733 can be accomplished with this technique by having the raised features impressed f...
login to reply

By: Volney. : January 26th, 2023-16:50
Many thanks for having found this example of the watch mentioned by Cologni's book! Do you know who supplied those dials to Vacheron & Constantin in the 1940s-1950s?
login to reply

By: Tick Talk : January 26th, 2023-22:50
who have been documented as producing certain V&C dials from that period. VC also used Stern Créations more recently, following their purchase by Richemont in 2000. But, of course, there were many other dial manufactures back then.
login to reply