I had fantasized about wearing a sub for the past couple of years. It was an itch that needed to be scratched. One could say that the sub is the porsche 911 of watches. At some point, I would need to experience one. Just as I think that anyone who’s deep into this madness needs to at least experience a Seiko (the cheap ones, NOT the expensive ones) for what it is, one needs to at least experience a sub at some point. So there I was agonizing about what sub to get. I’m sure some of you have read my posts/comments regarding the sub. I even went the extra half mile badgering a friend to sell me his 2-liner. Needless to say, the desire was there but finding a good one under the right conditions was next to impossible. I also realized that 4 liners were even harder to come by than the arguably purer 2 liner. I searched for over a year but to no avail.

Then came Feb 2021. I stumbled upon a close to perfect specimen.. last of the model year pre ceramic sub 4 liner, unpolished (seller made sure via his pics by accentuating the bevel lines), unserviced, close to NOS except for a very small nick on the 10 o’clock bezel and a hairline scratch on the triangle of the lume pip. Almost no bracelet stretch, bezel insert immaculate, and the winding on the crown was as crisp as my SD43. A couple of minutes had passed since it was posted and I immediately messaged the seller. The watch was finally mine!

Doubt creeped in a few days into ownership. It did not feel “legendary” on the wrist. It looked great whenever i took a pic but back on the wrist, pffft.

Do I regret buying it? Not at all. I enjoyed the whole experience of the hunt. And part of it is risking disappointment. The important thing in any search is that we look with our hearts first, then narrow it down with logic later. I also enjoyed handling it through an owners eyes and not through fleeting GTGs. I enjoyed the tactile feel of running my fingers through every part of the piece. It was quite a joy to handle knowing that the fit and finish was at par with my SD43. Unbelievable, really. On the wrist, while underwhelming, was quite comfortable. The 14060m just ticked all the boxes like how a good template marriage would. And that is why i held on to it longer than I should have.

I did follow all the rules of letting things stew and all that. But then I realized that I was not longing for it when not on the wrist. On my iphone, it was the least photographed watch! On this forum, probably the least shared!

I knew I could just have kept it but I don’t like keeping pieces that bug the hell out of me, “good investment” be damned. So off it went.

Just as soon as I offered it for sale, a guy locked in on it. He said he was looking for a 2012 birth year watch for his son. He fired off a last price query to which i replied in the negative. He said, “ok” and that was that. I figured if i was going to have seller’s remorse, I wanted to make sure that I’m able to mask potential regret with a decent deal. We met a few days later. I saw that he was wearing a Blancpain with that radiation indicator. I smiled. I took that as a sign that it was meant to go to him. Call me crazy but I value these sorts of things as part of our overall journey.

How do I feel now? Good actually. It was a good experience. Lots of learning.

Is that the end of the sub for me? Not at all. Maybe I try my hand at a 41mm just to round out the experience. Maybe

What’s next? I am looking at that new Omega SM 300 in blue. I asked the boutique the other day but no shipment yet.

Lastly, I guess I was right all along when I decided to go for the SMP300 2254 instead of a sub 18 years ago. It’s been EASILY on my wrist for a week now. Not as refined as the 14060 in terms of fit and finish but inexplicably more enjoyable. 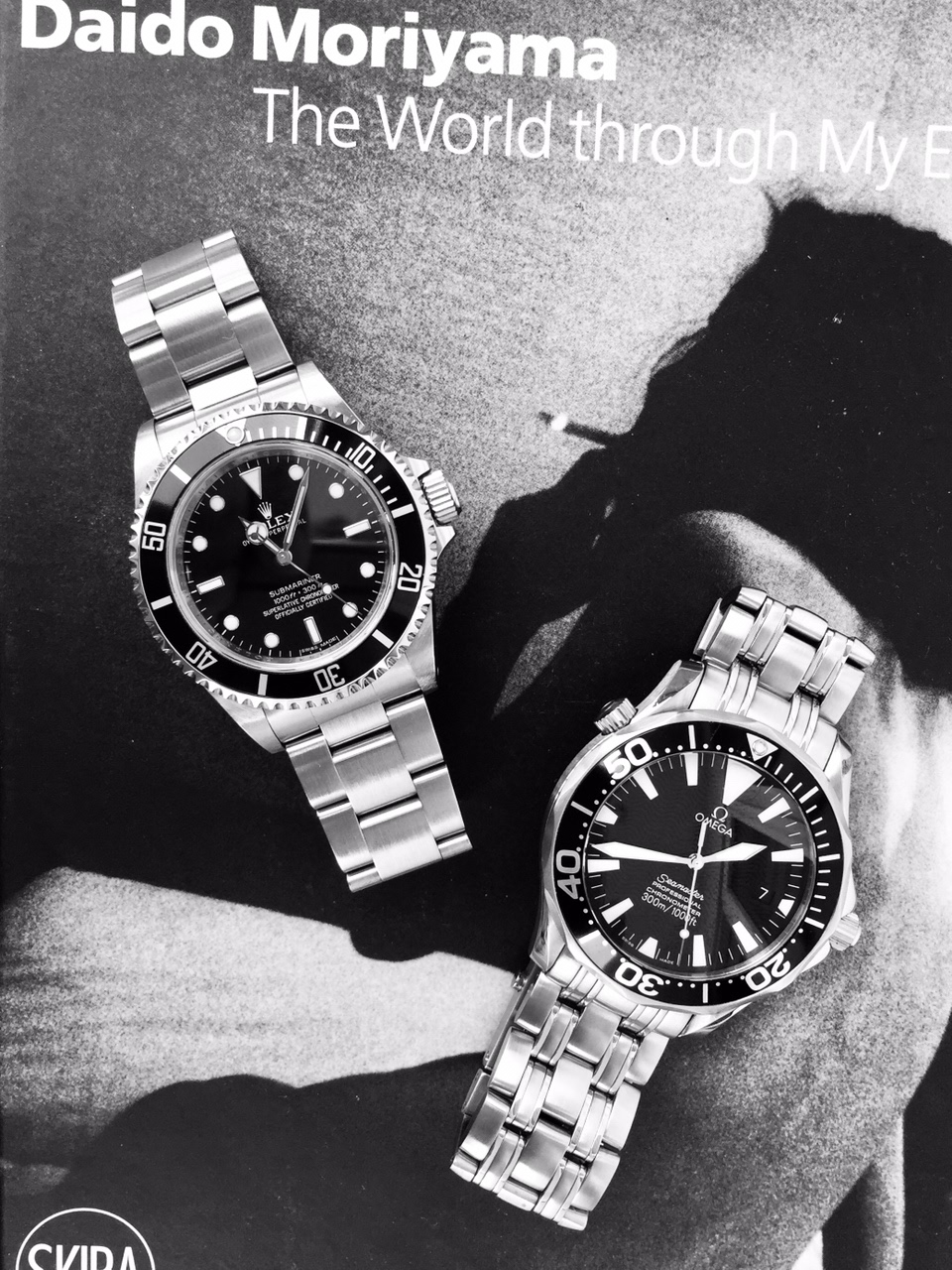 By: Echi : June 11th, 2021-04:29
I had fantasized about wearing a sub for the past couple of years. It was an itch that needed to be scratched. One could say that the sub is the porsche 911 of watches. At some point, I would need to experience one. Just as I think that anyone who’s deep ...
login to reply

Thanks for sharing your journey. It is enjoyable read.

By: hoseachandra : June 11th, 2021-04:37
I had SM 2254.50 long-time ago. IMHO the build quality ia excellent, veru comfortable on wrist. Nice alternating brushed and polished finish, way more attractive than Sub. The only thing Sub wins is about the movement. The caliber 1120 in 2254.50 is relia...
login to reply

I’d argue and say The ETA based cal 1120 is just as good if not better. The AK 47 of movements but more accurate hehe. Mine is running within COSC unserviced for the past 18 years :-)

That too. I thought it was going to be a different experience. Whenever I had this on, I’d usually look forward to getting the 43 back on the wrist. In terms of wear, it wore quite similar to the explorer 39 so that wasn’t helping any as well.

I totally understand your point. I have a poor 5513 which won't survive, as well... Because of the damn Tudor 7924 and the Triple 6... Aaah, and by the way, I fell in love with the James Cameron I could try this week!

Oh nice JC! How did that go? I’m sure you’ll give us a few impressions if and when. I understand the situation having the tudor and the 666! Can’t say though that being in these situations ain;t enjoyable :-)

I always turned around the JC. But I wanted to see it in the real life, to be sure. It is an extremely cool watch, with a not less extremely cool reference ( another Triple 6! ).

Hahaha! One passion at a time! Been toying with the idea of getting a Mitsubishi Pajero (now discontinued) just to add something special to my photo safari experience. Maybe one day who knows :p

Too funny. I always loved the Pajero and the Defender, which for me, are the best 4x4 ever made for " roots guys " like us. With a good old Tudor Big Crown OR an Air King, it is a killer combo!

Imagine that. As much as I like the first gen ones, i don’t have it in me to do restorations. Plus I need an auto gearbox 4x4. I don’t mind the last of the line ones. Ah, Tudor.. will get to that one day as well..

You won't regret it. It is a damn cool watch:

Do you prefer all red?

Partial to khaki and green but anything canvas should work. This red will look great when it gets distressed and faded a bit over time!

Thank you for sharing your experience and thoughts. I found it particularly interesting because I recently added at 14060M 2-liner after a couple of years sporadic hunting. So far I think it’s a terrific addition to the collection and a pure classic.

Believe me I struggled to love the 4 liner as it’s a beautiful watch. The 2 liner even more so! When it finds the right wrist, i can only imagine how enjoyable that watch could be. Hopefully you enjoy yours to the hilt :-)

By: Cookies : June 11th, 2021-10:11
Watch collecting is about the community. Sometimes we value experiences over keeping the stuff. I think you let is go because of the right reasons, and the experience is priceless. This is a beautiful story!
login to reply

Thanks. I’m sure members here have similar journeys. Just takes a bit of time to type :p

Thanks for sharing the journey and experience.

I thought about moving up the 5 digit ladder with the SD but resisted the temptation. Not because i already have the 43 but that i think i’ve reached my limit with the 5 digit era..

By: Echi : June 11th, 2021-12:52
Besides, the date placement on the 16600 is a bit off for me. The only 5 digit i have now is my exp 2. Ah, vintage subs totally different animal! Not sure I can go that route with my penchant for complete sets. Under those circumstances, prices would beco...
login to reply

2 liner for me all day long

I really prefer this one over the 4-liner :-)

Good to know it worked out for you. It’s a really great watch and I’m glad mine found a better home :-)

Yep i think that’s it.

What a ride 😜. Great way to finish in the end 👍

And hopefully not the last! It’s rare when a desire for a watch latches itself on to you like a siren’s song. I love it when that happens. Thanks for reading :-)