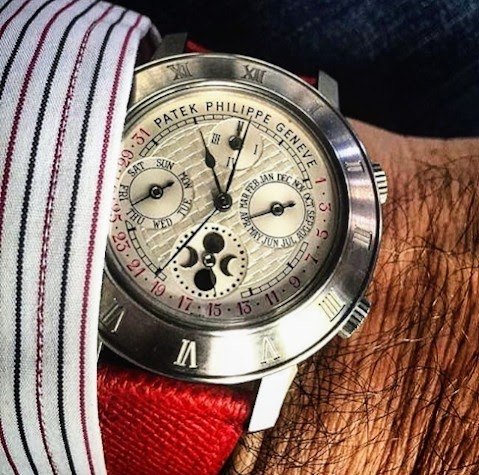 If Patek limited editions are reasonably rare, and unique versions produced for special collectors are (in modern times) even more exceptional, titanium pieces appear to be among the most exclusive and prestigious of the entire Patek production.
So for some reason my friends, I got very curious about this topic during the past couple of days, and made my small "research" on the web. Here's the stunning result: It appears that only *12* (twelve!) titanium Patek wristwatches are known to have ever existed. All of them are, of course, unique pieces.
These wonderful 12 can further be divided into two categories: Seven made for the Children Action or Only Watch charitable auctions (references 5712T and 6000T in 2007, 5180T in 2009, 5004T in 2013, 5396T in 2015, 5208T in 2017, and 5524T in 2018); and five that were produced as special orders, sometime between 2000 and 2004, almost certainly for the same (VVVIP) collector.
These five beauties go under refs. 3998T, 5001T, 5102T, 5033T, and 3928T (the latter is one of the most unusual Pateks I have seen, featuring a stunning 9.44-carat flawless diamond in the case back!). The general public first heard about them when they appeared at a Sotheby's New York auction in June 2014, as part of an incredible 11-piece private collection commonly referred to as the "Titanium Collection." 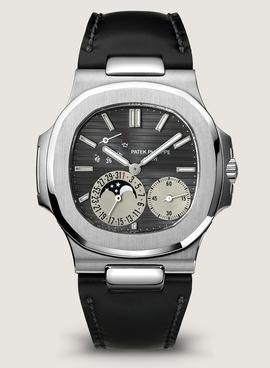 Ref. 5712 in titanium, even more difficult to find than the steel version

While most websites that I found mention the existence of fewer titanium Pateks (but always within the above 12), let me say that the most of the data I was able to gather simply confirms the information listed at the following link (except that 5180/1T should probably read 5180T, since I don't believe the watch originally came with a bracelet). In fact, the site below obviously arrived at the same conclusions earlier than me, so it deserves all the credit.
https://blog.perpetuelle.com/
Finally, and also fascinating, while the name of the original owner of the five beauties auctioned in 2014 remains mysterious (at least to me), the majority of these 12 unique pieces seems to now belong to the same private collection, that of uber-famous Patek collector Claude Sfeir. The picture at the top is of the 5001T, which Mr. Sfeir regards as one of the most important watches of the 20th century. 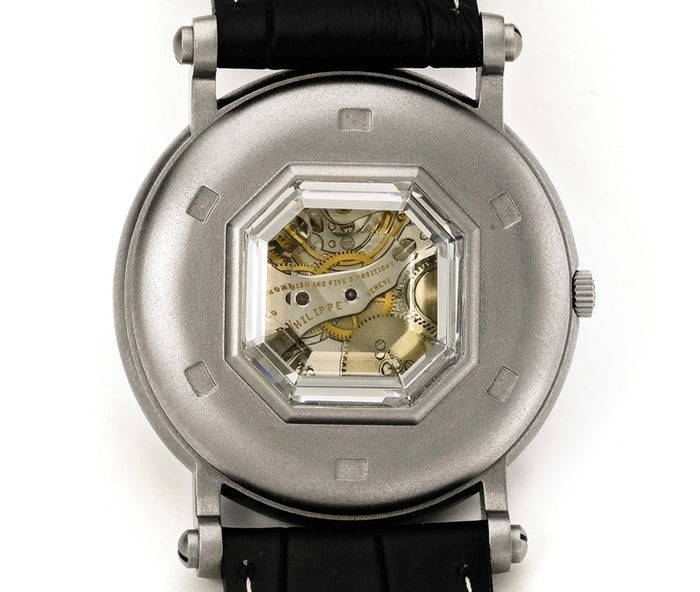 The stunning case back of Calatrava 3928T, sporting a 9.44 carat diamond.

So now that I got so fascinated about this topic, my simple question is: Are there any other Pateks in titanium??
It's very possible, if not likely, that over the years other VIP collectors might have convinced the Stern family to produce a titanium piece, even though they may have (understandably) chosen not to make it public. Perhaps we even have some among the members here?

I'll be happy if anybody has further information to share on this topic --- and in any case, thanks for reading! 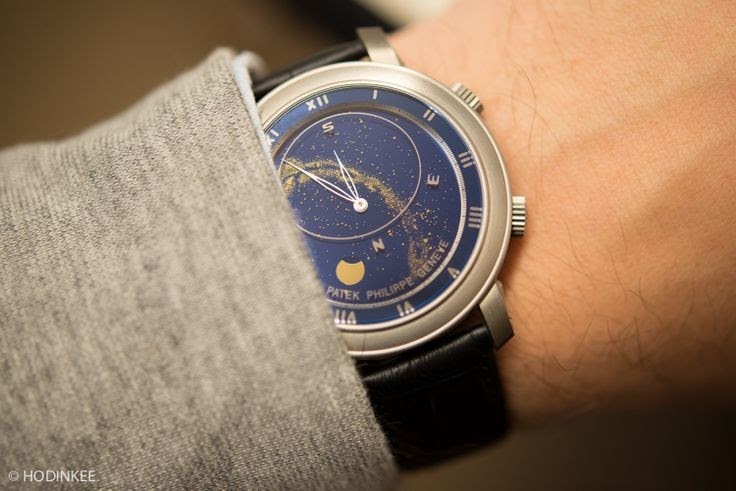 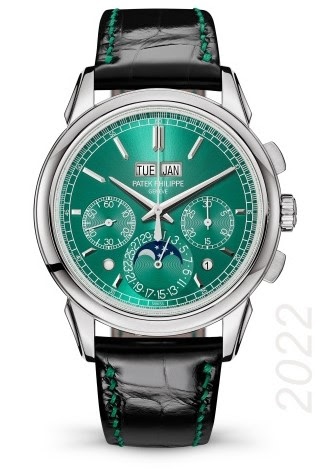 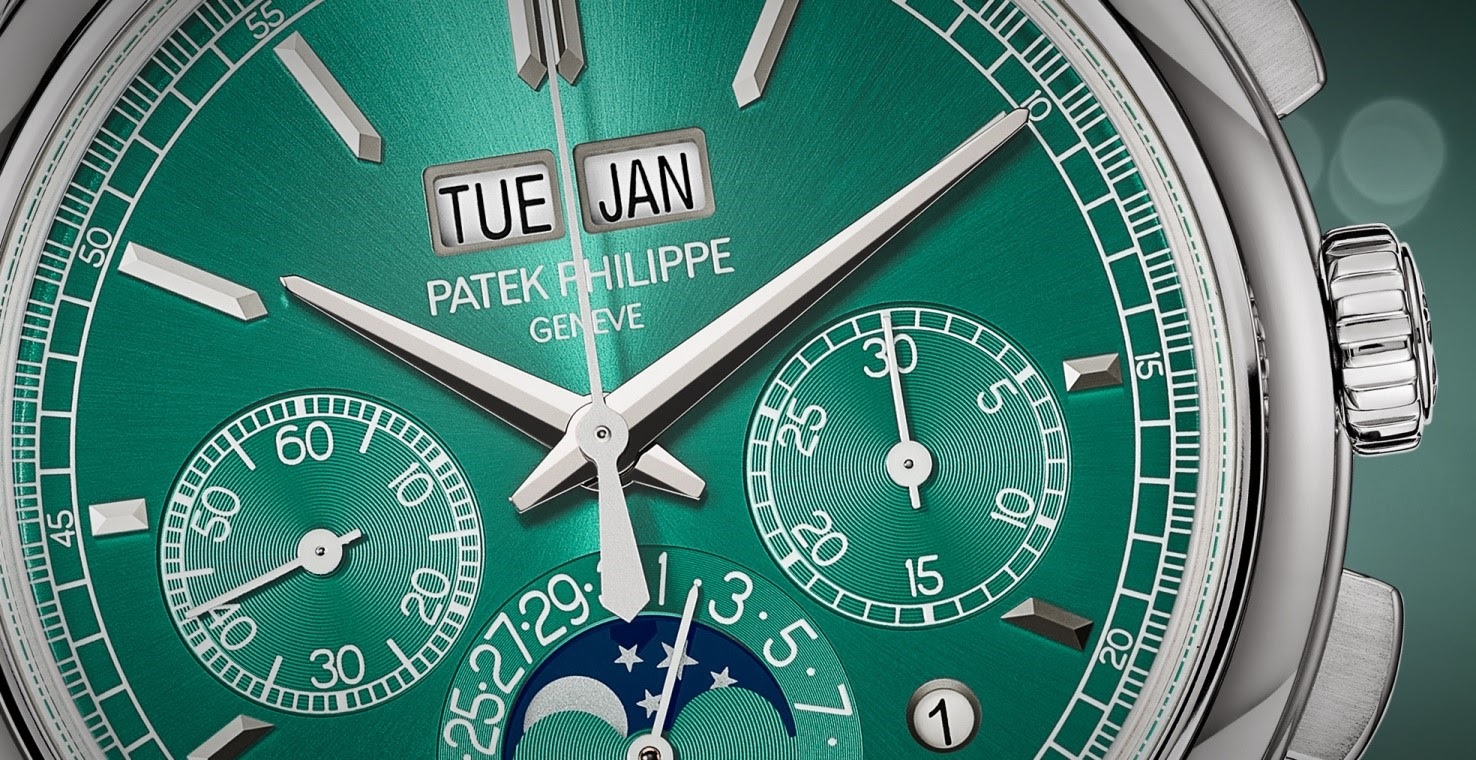 By: FabR : November 5th, 2018-07:14
If Patek limited editions are reasonably rare, and unique versions produced for special collectors are (in modern times) even more exceptional, titanium pieces appear to be among the most exclusive and prestigious of the entire Patek production. So for so...
login to reply

By: logotype : November 5th, 2018-07:21
Very interesting! Looking forward to read more about this. I didn’t know that PP produced any Titanium pieces until your post. Thank you
login to reply

What a wonderful thread, thank you!

By: Langeholic : November 5th, 2018-07:26
As much as I love a wide spectrum of Patek timepieces, I too am most intrigued about their rarest pieces. Having tried a titanium edition in the metal so to speak, I can’t say I prefer it over platinum or gold, but I no doubt found it very intriguing! Tha...
login to reply

Thanks Keks, indeed in a league of its own! [nt]

I can understand that... Direct in the dream list, as there are zero chances to get it. [nt]

Certainly no more than one!😂😉👍

Magnificient rare pieces, and I think if Patek produces a little bit more Titanium watch, it will be a great hit to all Patek's collectors

Will probably not happen. But RM have some nice ones 😊 [nt]

Thanks Baxter, that'd certainly be quite a move, though I'm not sure how much in the Patek DNA if you are referring to a regular production...;-) [nt]

Thank-You, and hopefully that's not it, who knows:-) [nt]

Thank-You, will certainly do, and am curious if others know more :-) [nt]

By: keks : November 5th, 2018-12:39
I would be all over a titanium Patek if ever produced within reach for mortals like myself... I once mentioned to Thierry Stern that I would love to see a titanium piece in my collection and he told me there usually is an opportunity for anyone to purchas...
login to reply

Totally agree, getting one would be incredible --- something that would become the single top piece of (virtually) every Patek collection! [nt]

I appreciate it, thanks a lot. [nt]

Thank you for sharing. I was aware of the auction pieces, less so the private collection.

Surely not me:-) I also don't like it when a powerful term is used to the extent that it loses significance, but I agree that if there's one instance where "grail" is perfectly suitable, this is the one! :-) [nt]

By: Clueless_Collector : November 5th, 2018-15:41
did you check with our honorable cbb? From what I observed here, her late dad’s PP collection seems second to none, maybe even the uber famous collector you mentioned 🤔 We might be in for more surprises.
login to reply

Thank-You Raymond ;-) Cbb would indeed seem quite a formidable candidate for this...:-) [nt]

Thanks for this article, fun and informative, and the Celestial is very beautiful. [nt]

By: BABKA : November 6th, 2018-09:34
Thanks for sharing! I wonder who the original owner was? Perhaps a low key individual with unique taste. I’m happy with their steel pieces although a bracelet Nautilus would be pretty light and spectacular on the wrist at that weight.
login to reply

Thanks a lot, appreciate it. I've actually received some initial information on the possible original owner since I wrote this yesterday, which if true, would be very interesting.

By: FabR : November 6th, 2018-11:22
I don't feel like posting any details at this time, however, since that information is still entirely uncorroborated. In any event, I do agree that an individual ordering the first titanium Pateks ever in the early 2000's, whoever they are, certainly have...
login to reply

Thanks for your input, Imran. I believe you identified them all except for the following three: 5180T, 5396T, and (the incredibly unusual) 3998T:

Dear Friends, let me just record an amazing update to this 2018 Patek thread of mine that I hold VERY dear, where I had gathered together ALL 12 (twelve only!) known Titanium Pateks produced until year 2018 (of course all unique pieces)!

By: FabR : May 5th, 2022-07:45
Well, nearly four long years later, number 13 has just seen the light! It's this stunning, green-dialed ref. 5270T, of course a unique piece like its 12 predecessors, which will be auctioned for charity come November on the occasion of "Children Action 20...
login to reply

November 7?😂 Hard to find something more valuable, exclusive, and created for a more noble cause than this 5270T…truly lucky its future owner!😉🥂

My dream of a ti

By: keks : May 5th, 2022-09:09
Goes many years back… recall handling the 6000T at the Phillips HK preview about 6 years ago and have been dreaming of this piece since… I see now it sold to a passionate collector who will likely never let it go which is great since I can give up on that...
login to reply

I do remember your interest, I believe you also mentioned this to TS himself👍 Of course all past T watches will be extremely unlikely to come to the market again, so I'm really happy that such a special tradition is continuing, one piece at a time :-)

By: FabR : May 5th, 2022-19:27
I sincerely wish you all the best in realizing this dream one day --- it's not an overstatement to say that a Titanium Patek would become THE single most valuable piece of virtually any world-class watch collection! Cheers.
login to reply

By: keks : May 6th, 2022-05:47
I did tell TS about my wish for a T… and he told me one was coming up for sale later that year at Only Watch … I did also tell him I wished for a green dial Nautilus or Aquanaut as an alternative to blue… and he did two years later release greens … but I ...
login to reply

Definitely, very nice that such a remarkable watch will also give an important contribution to a noble cause👍

By: WatchUC : May 5th, 2022-21:27
A win for the children’s charity. I’m sure it will also bring greater attention to the PP perpetual calendar range, especially the 5270.
login to reply

All I don't know

Also for me, it was indeed REALLY interesting to research this matter (of course "research" in a non-academic sense --- I humbly just put together known information and reported on what others created....in this case, Patek! ;-))

Fab, many thanks for an incredible post - both academically and photographically! Seeing the 5396 leads me to this idea...

Many thanks for your input Patekova, always my pleasure to report on these amazing Patek creations for our forum! It's indeed quite remarkable how long the 5396 has been in the catalog, not to mention its large number of iterations over the years! ;-)

In many ways for me 5396 represents Patek at its best: seriously complicated (almost like a full perpetual), arguably the most useful complication, perfect size,

By: patekova : May 7th, 2022-00:06
Calatrava case, continuous motion because of the sweep seconds hand, and above all that it is BEAUTIFUL.
login to reply

In full agreement, and I'm actually seeing more and more knowledgeable collectors who are giving a fresh look at the beauty and perfection of this reference! Already a timeless classic in many respects! ;-) Enjoy.