I hope that you have enjoyed our WristScan theme “Weekend Watches ” .
My sincere thanks to everyone that joined us this weekend and to Art and Jurry who are our esteemed judges.
• Best Wrist Shot - Art
• Best Static Shot - Jurry
The verdicts will follow shortly depending on our various commitments and differing time zones.
I will announce Watch of The Week later this evening.
Have a great week ahead friends !
Best regards
Captain - Host 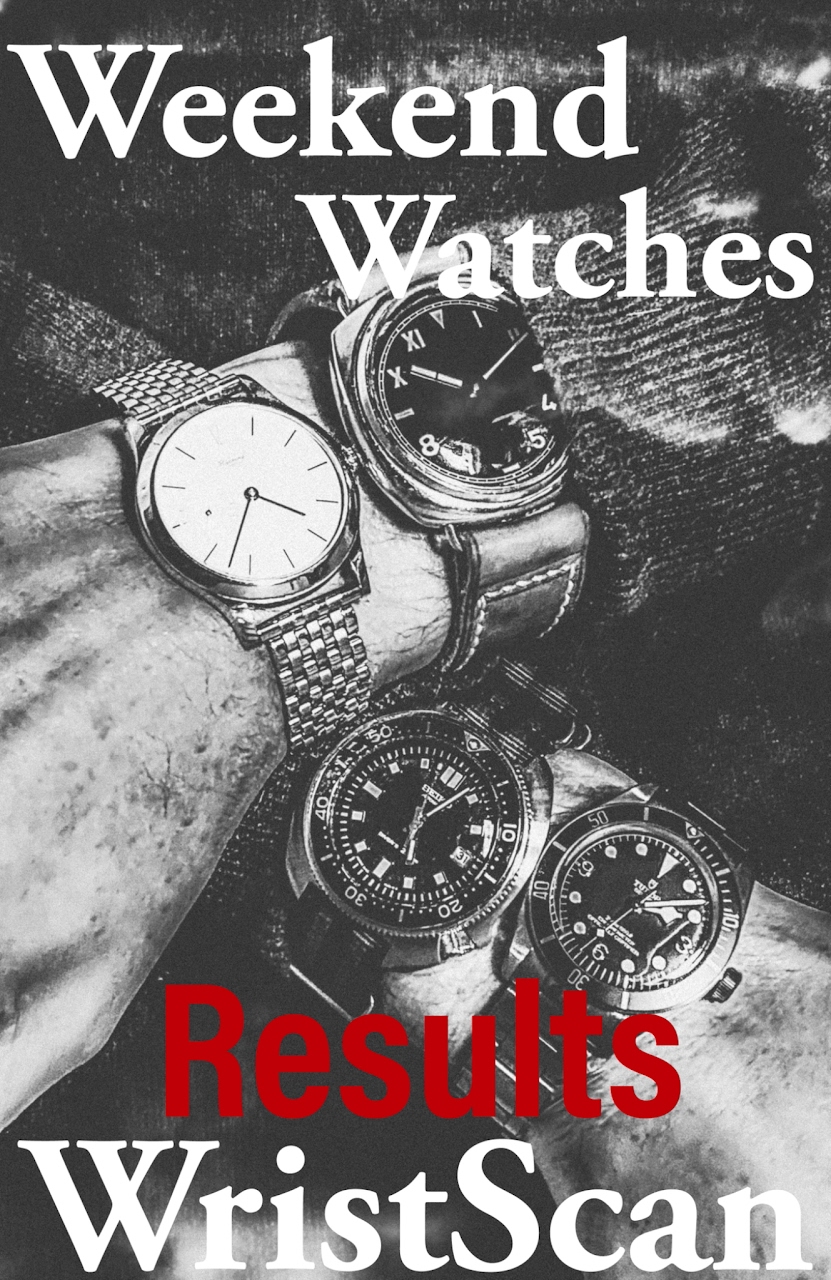 By: Cpt Scarlet : October 10th, 2021-18:55
Hello dear friends,
Thank you for joining us for WristScan this weekend, we had so many tremendous photos posted, thank you.
The following watches made the final cut…
Im6 with this beautiful UJ, that captured the true passion of a weekend of pleasure … 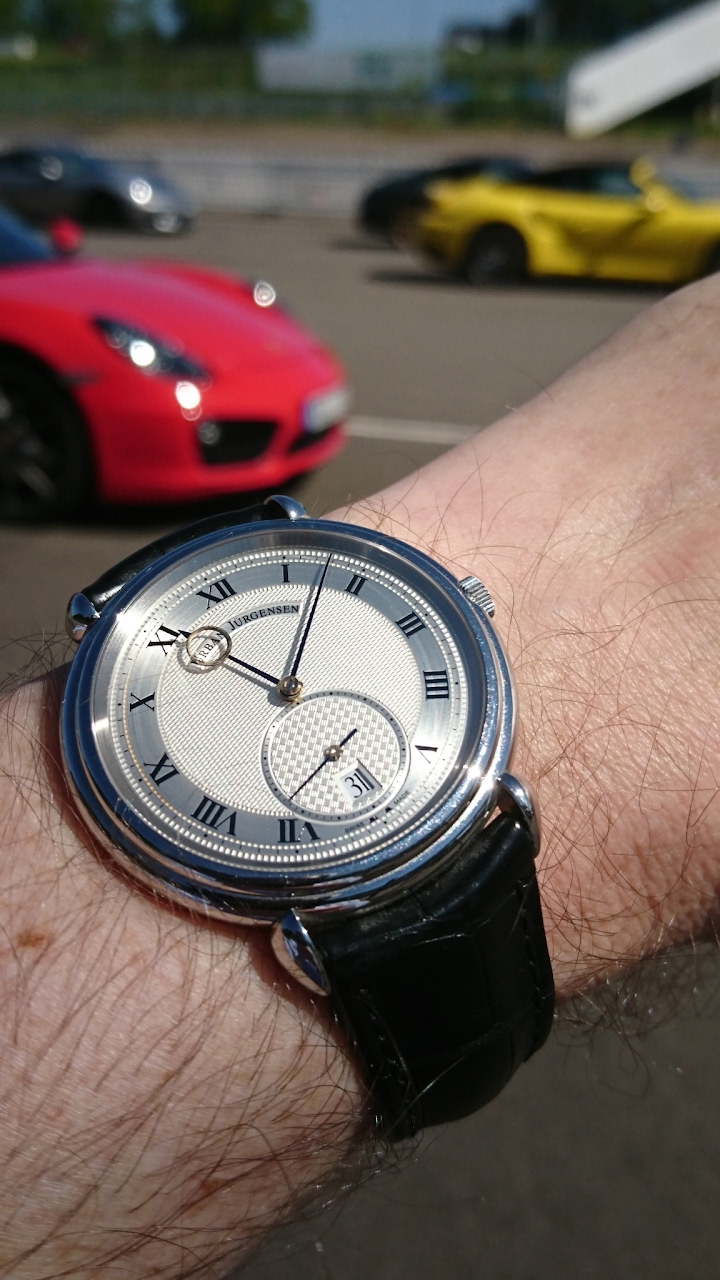 Watchonthewrist, always a serious competitor with this superb Habring … 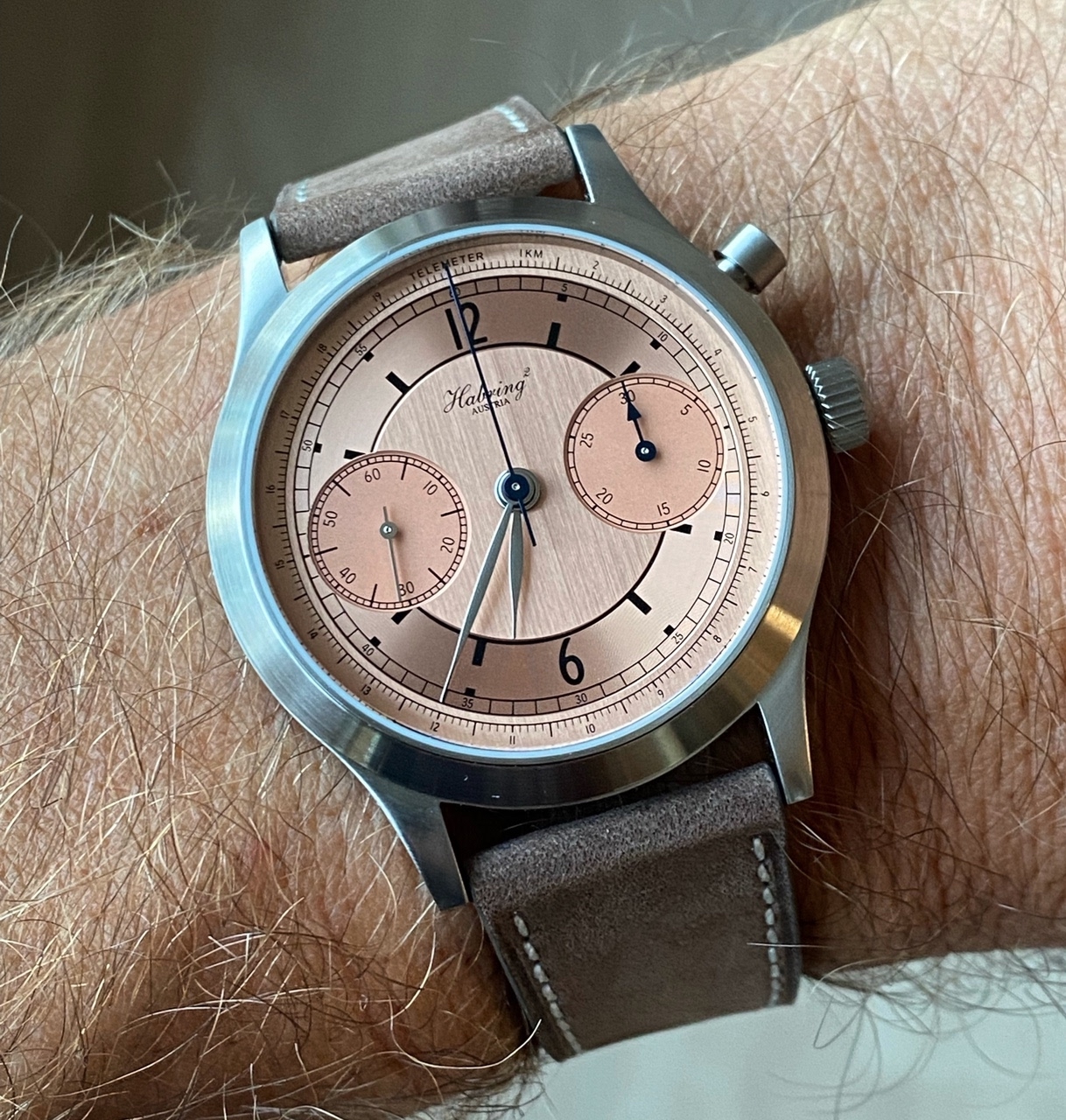 Ajas, the perfect weekend Panerai and a pint ! … 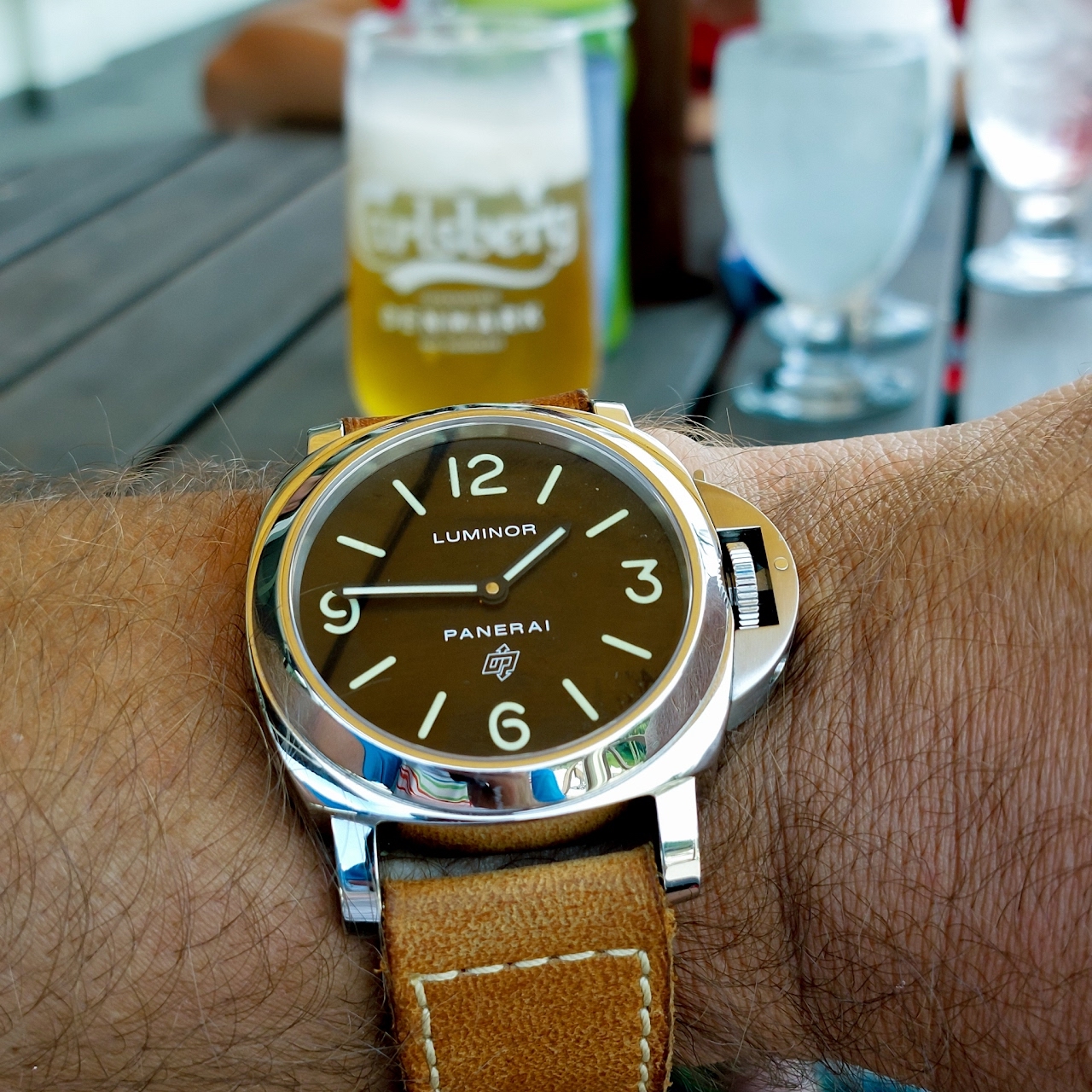 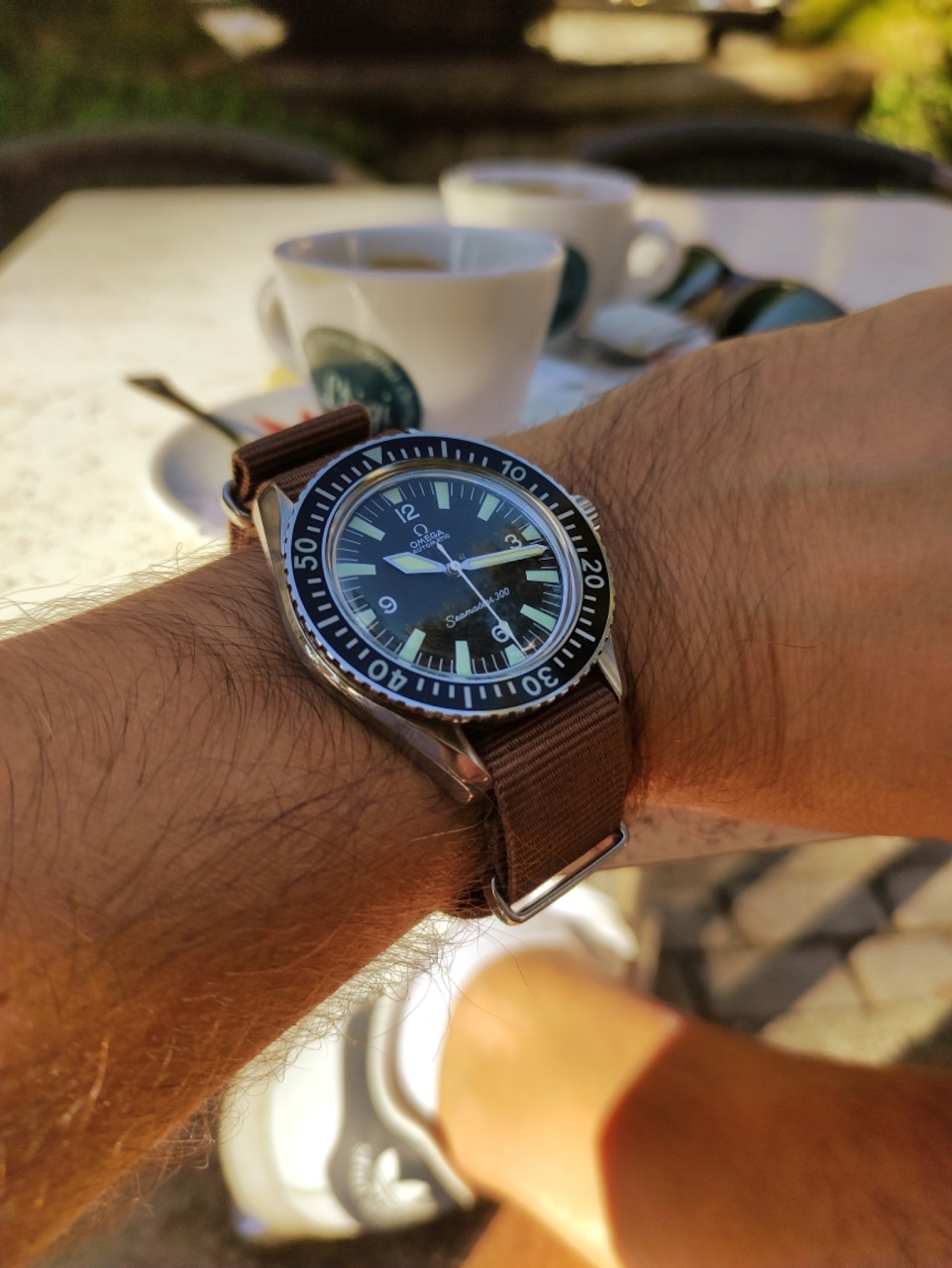 Sfwatchlover, almost took the top spot with his Omega Seamaster “Casino Royal” … you really share the passion for Bond and Omega, well played ! 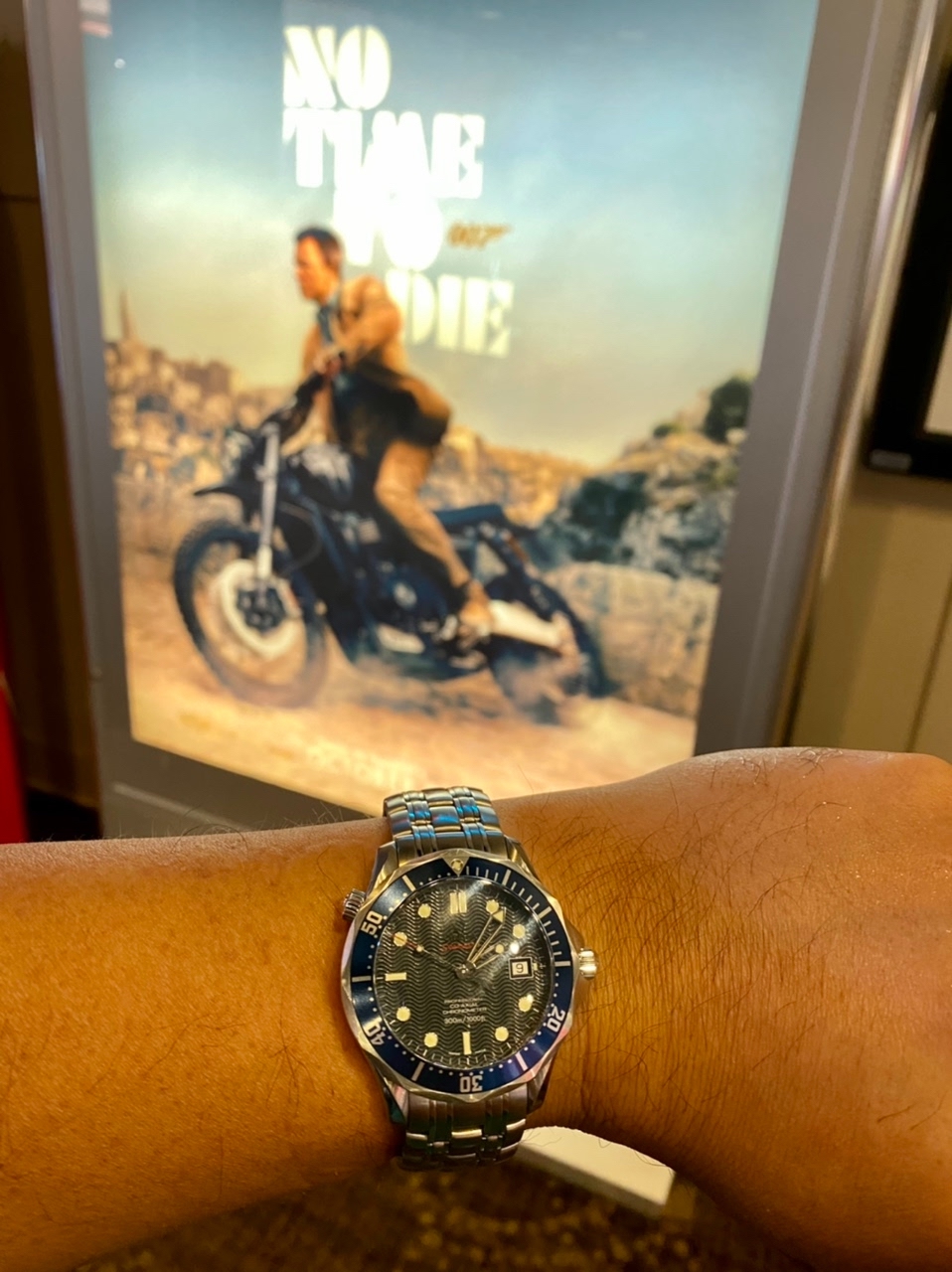 But… ultimately I couldn’t ignore the combination of a top draw Patek and a very relaxing weekend shot… Congratulations David, your are the winner of WOTW ! 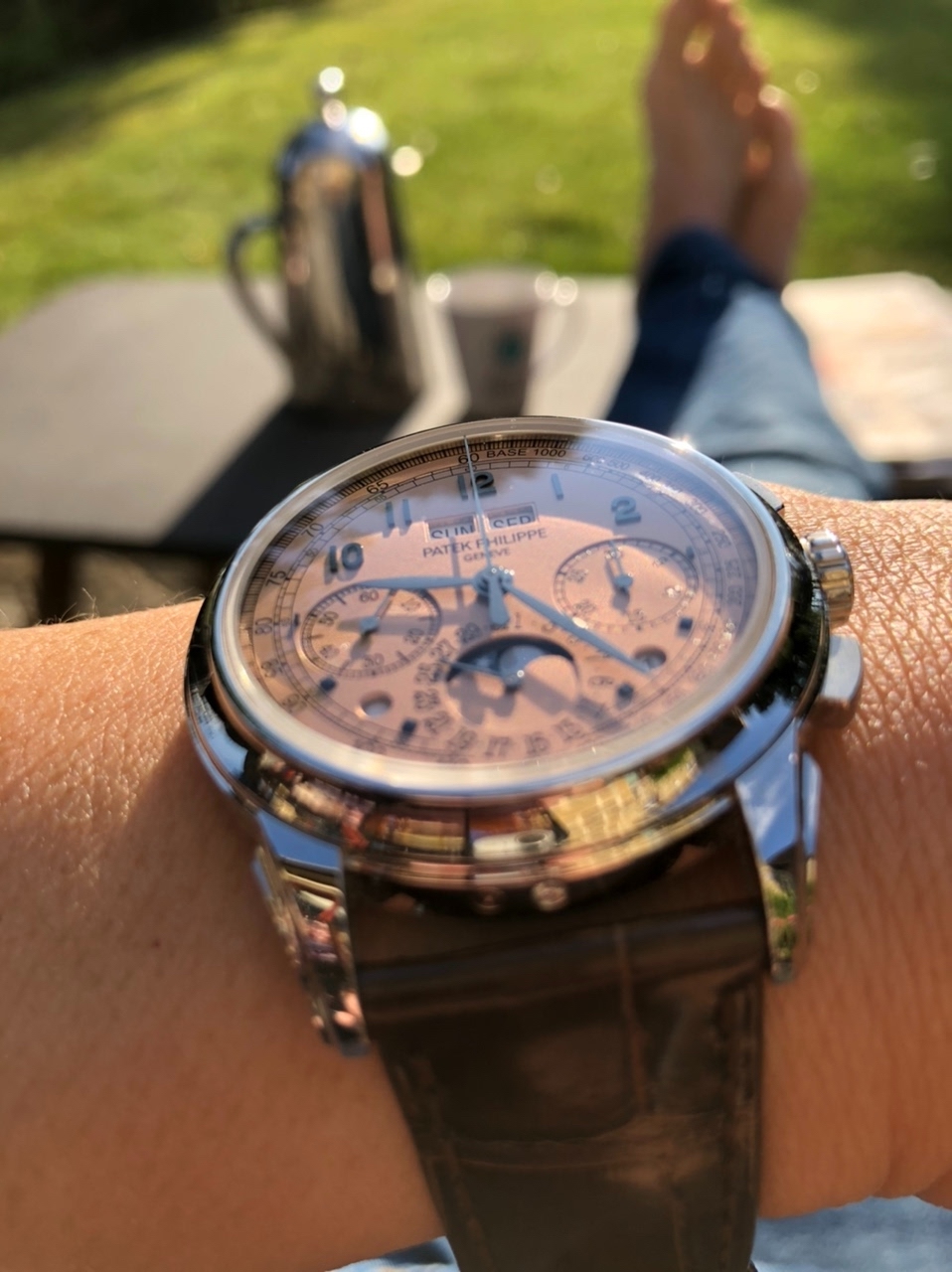 By: Sfwatchlover : October 10th, 2021-19:52
Congratulations to David for the winner! What a beautiful and exquisite Patek! Congrats to all honorable mentions as well and I love each of them! A great theme to participate during the weekend. Thanks again to Captain and judges for hosting! Take care!
login to reply

By: Cpt Scarlet : October 10th, 2021-19:55
and thank you for joining us for WristScan this weekend.
Hope to see you for our next edition of WristScan.
login to reply

By: Subexplorer : October 10th, 2021-23:37
... and a joy to have on the wrist while spending some relaxed days.
Best cordial regards and wishes of a nice week ahead friends!
login to reply

In the aesthetic consideration category we have Doug's Zenith EP . . . 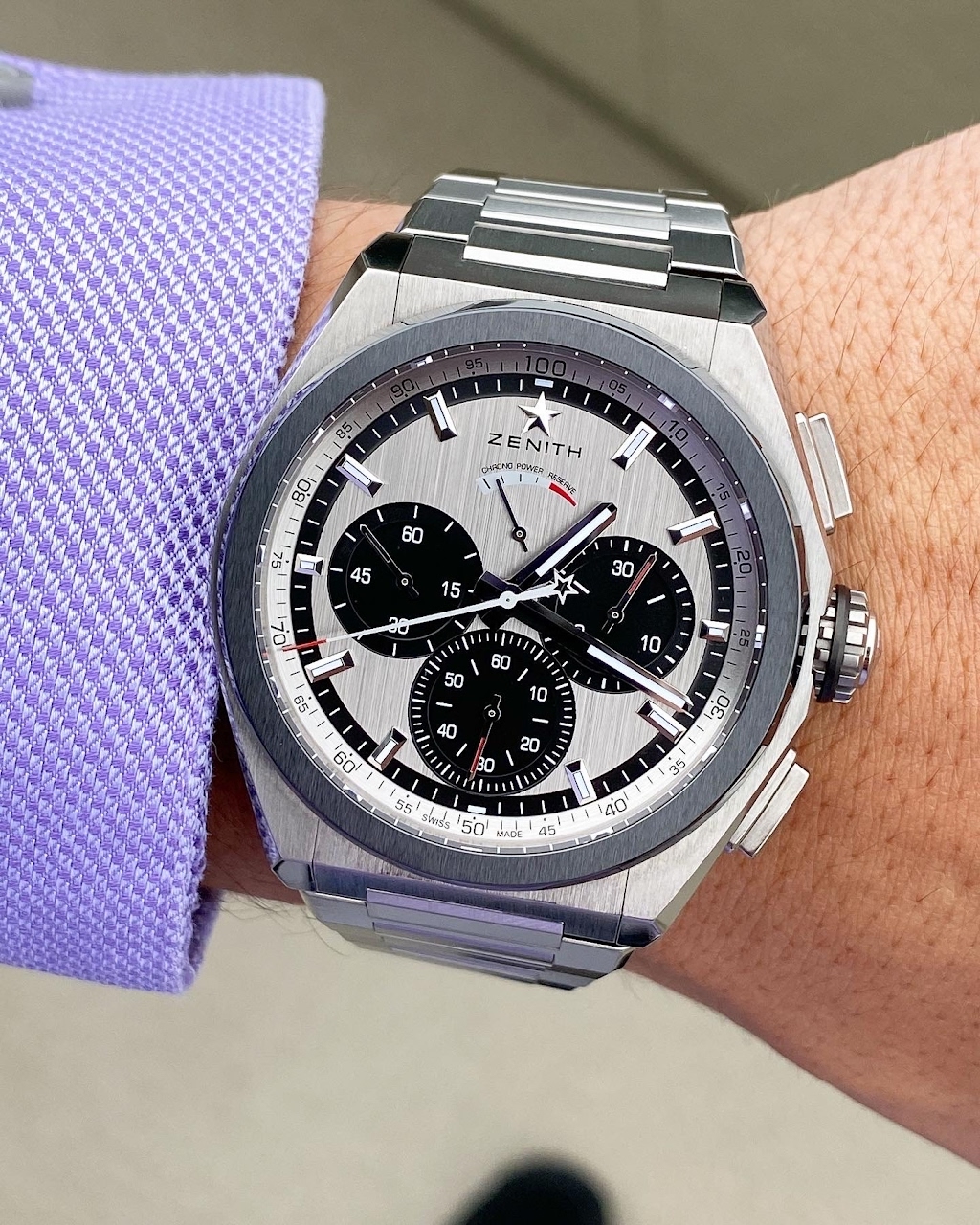 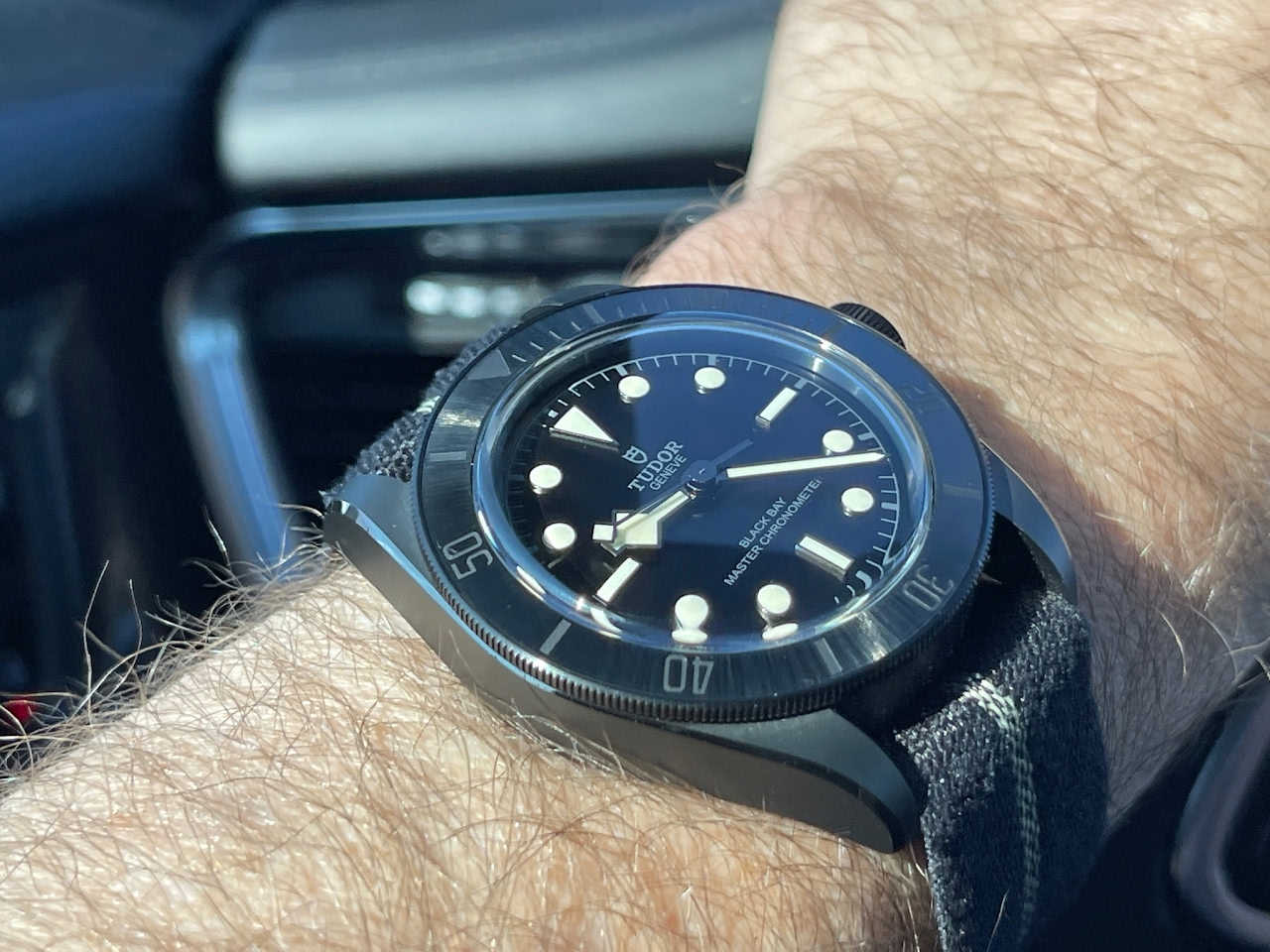 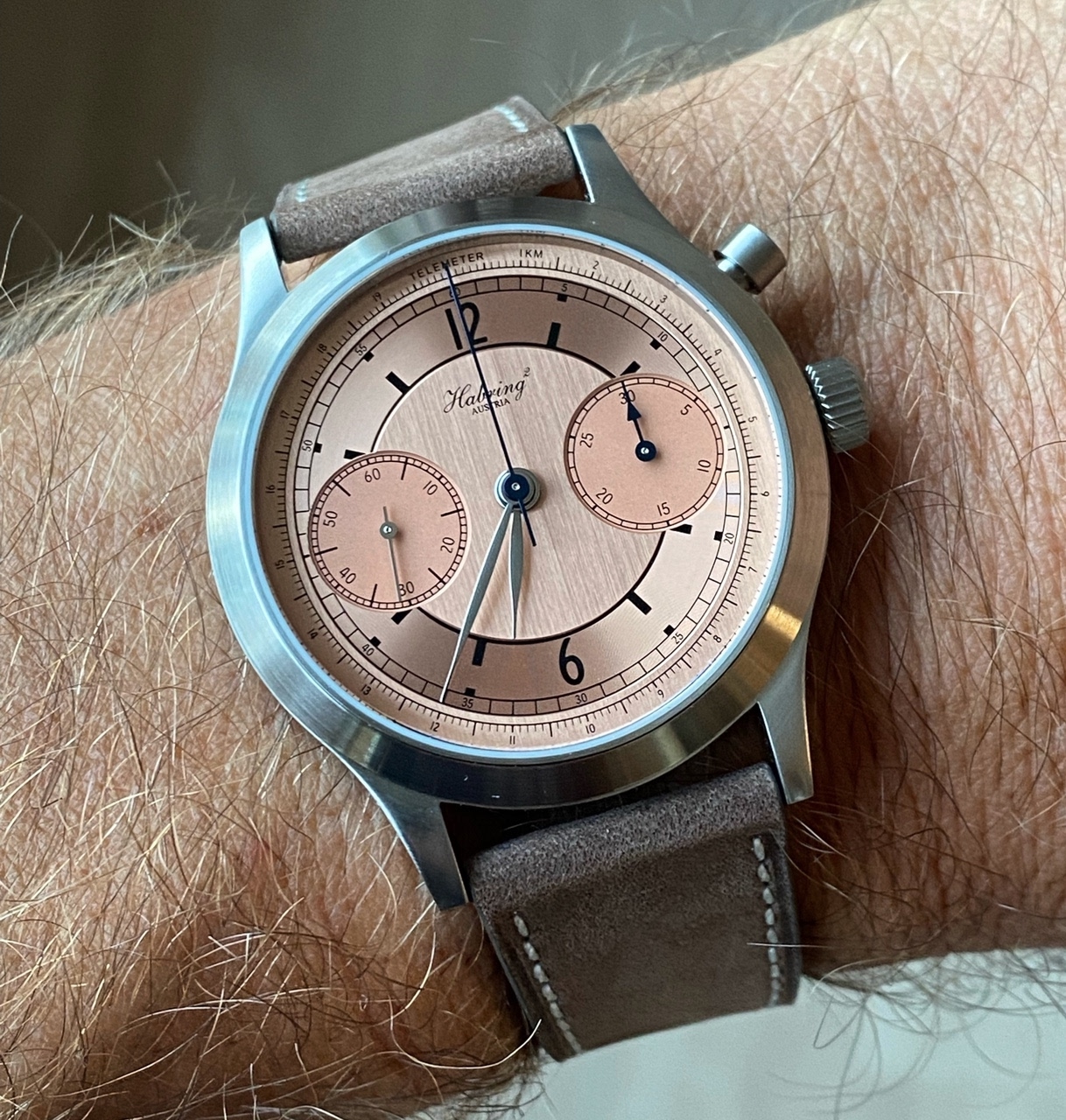 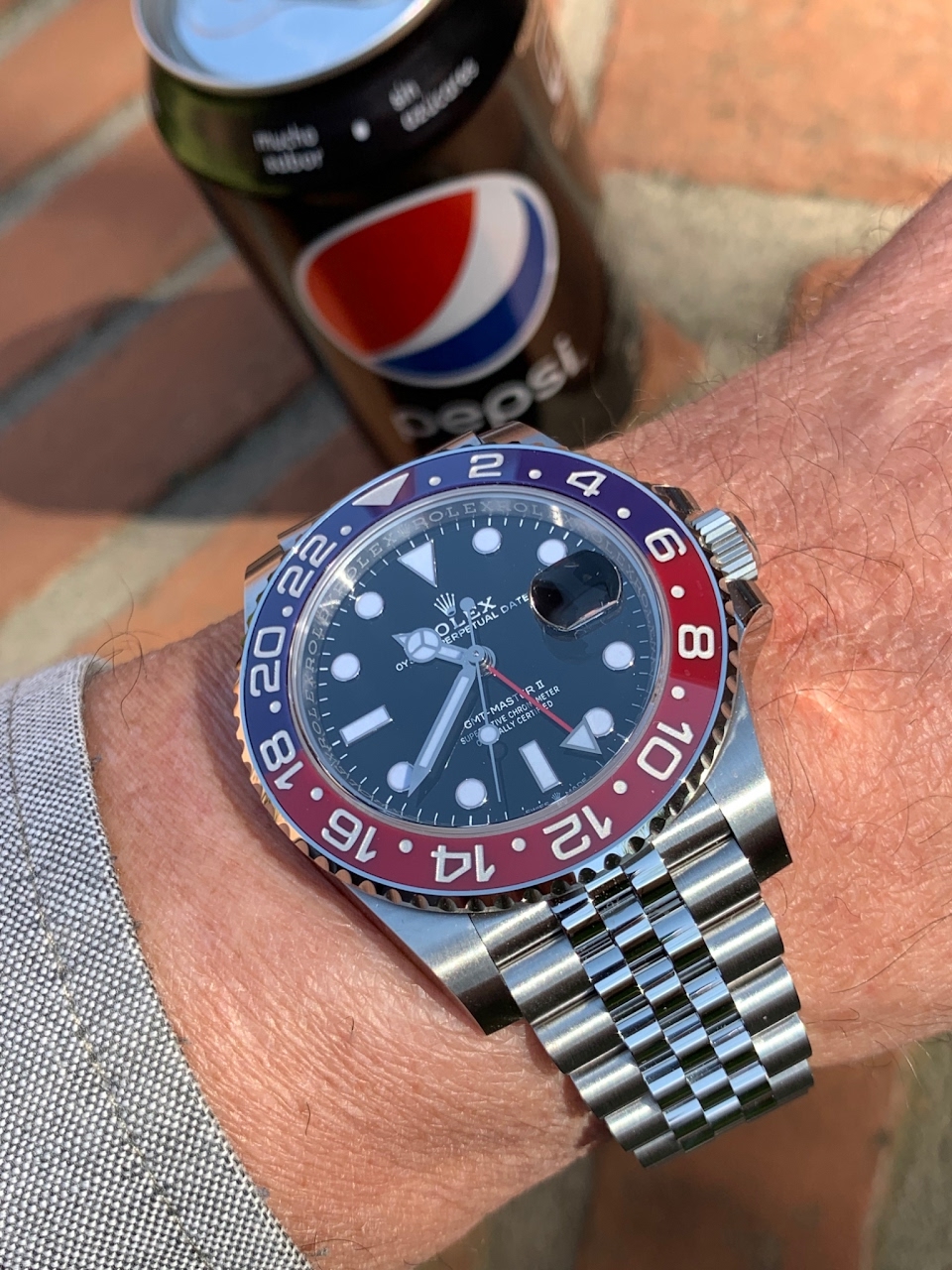 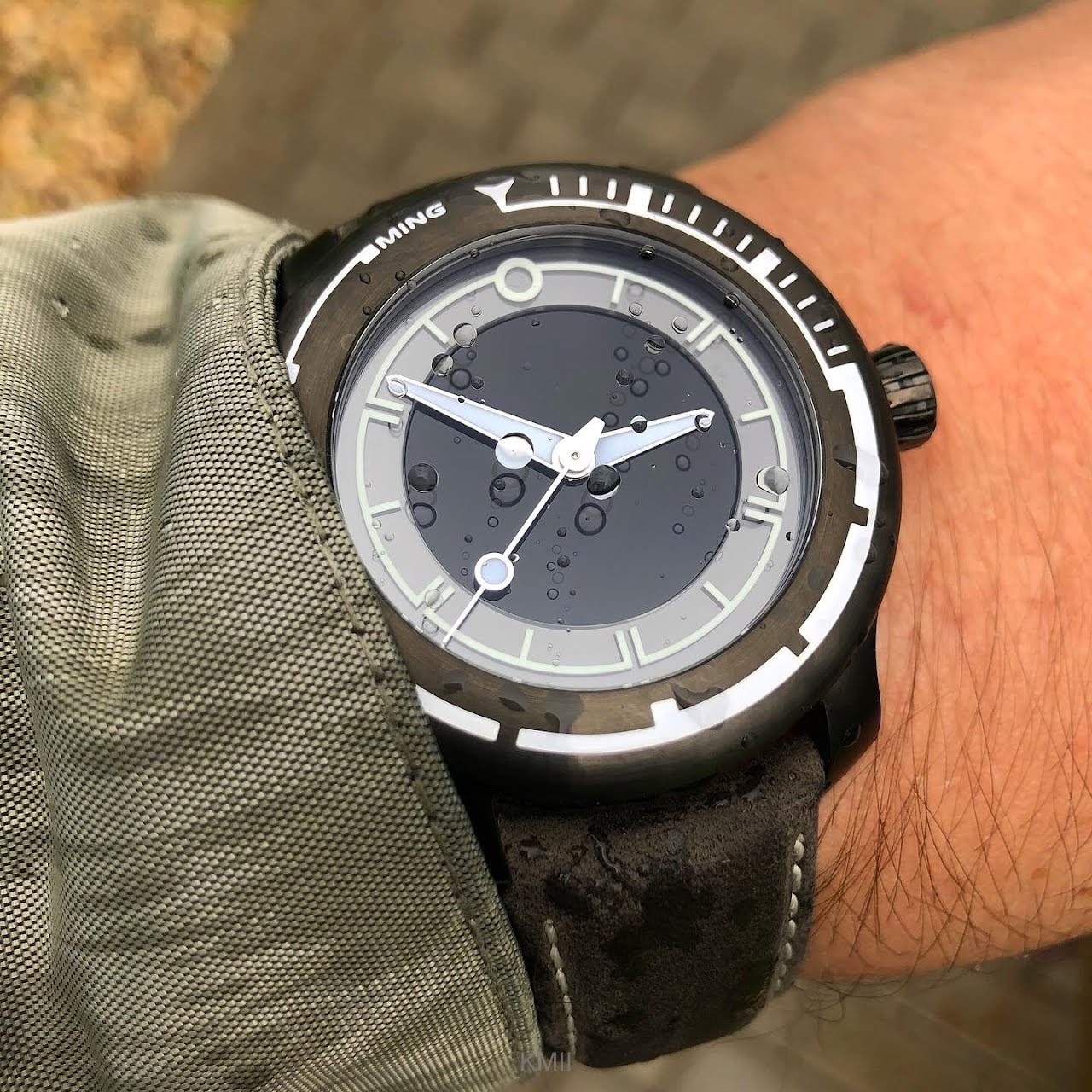 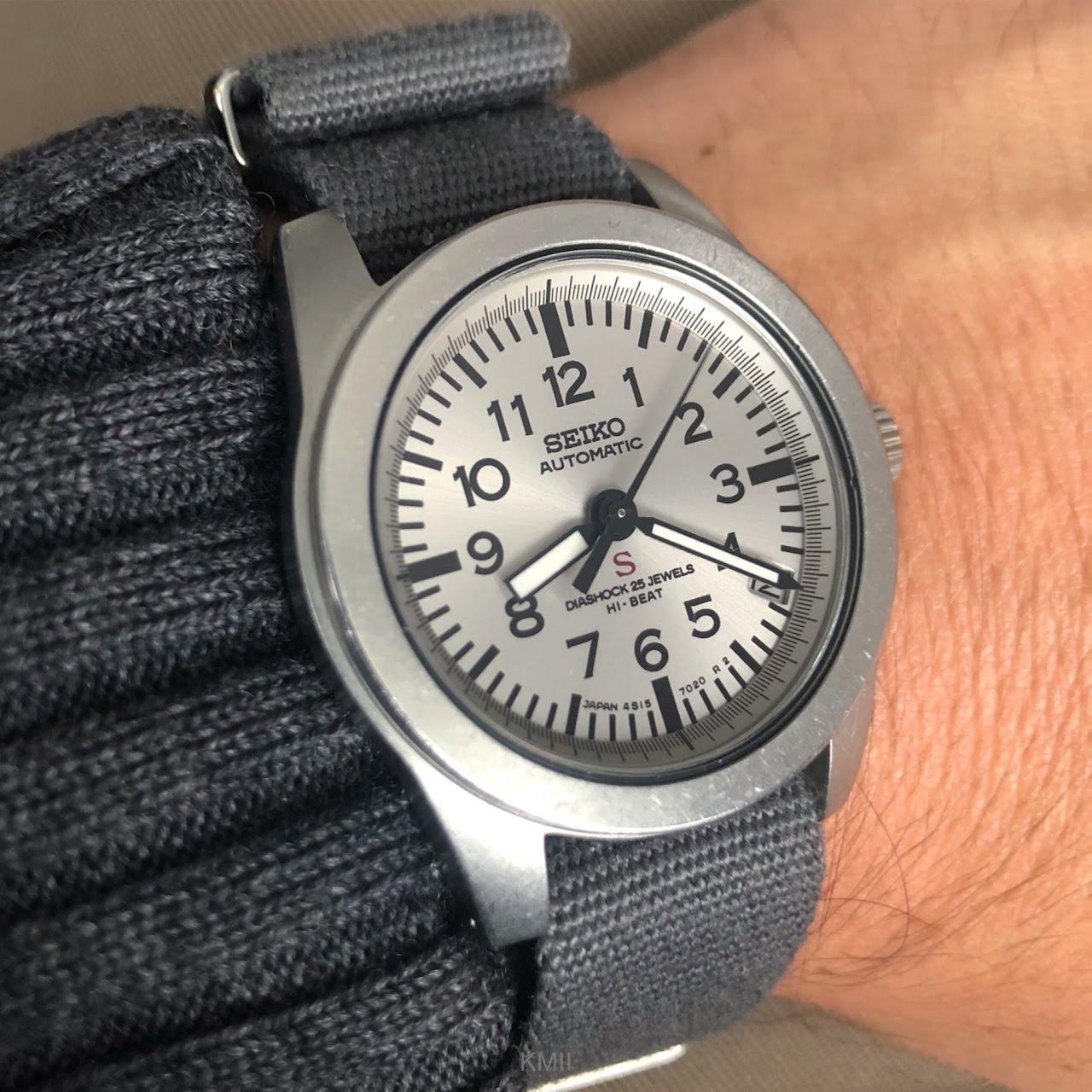 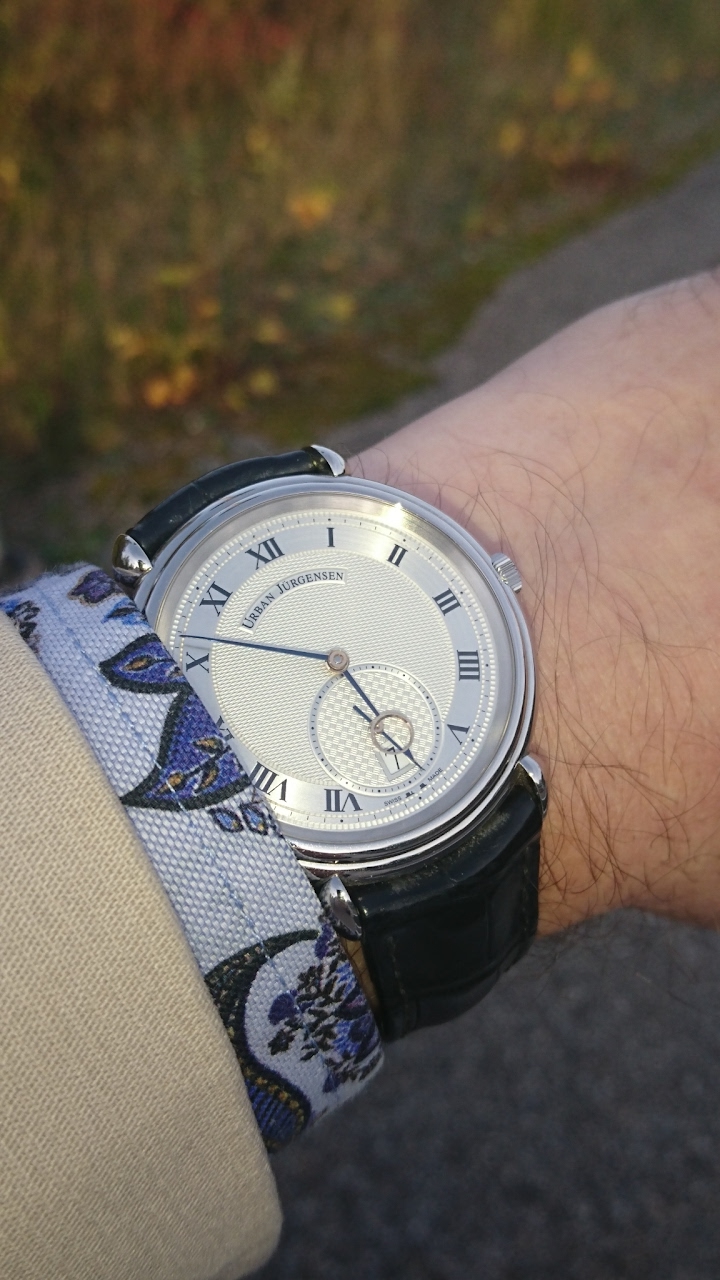 Then, there were the submissions that hewed to Captain's theme.  Fred's Wyler . . . 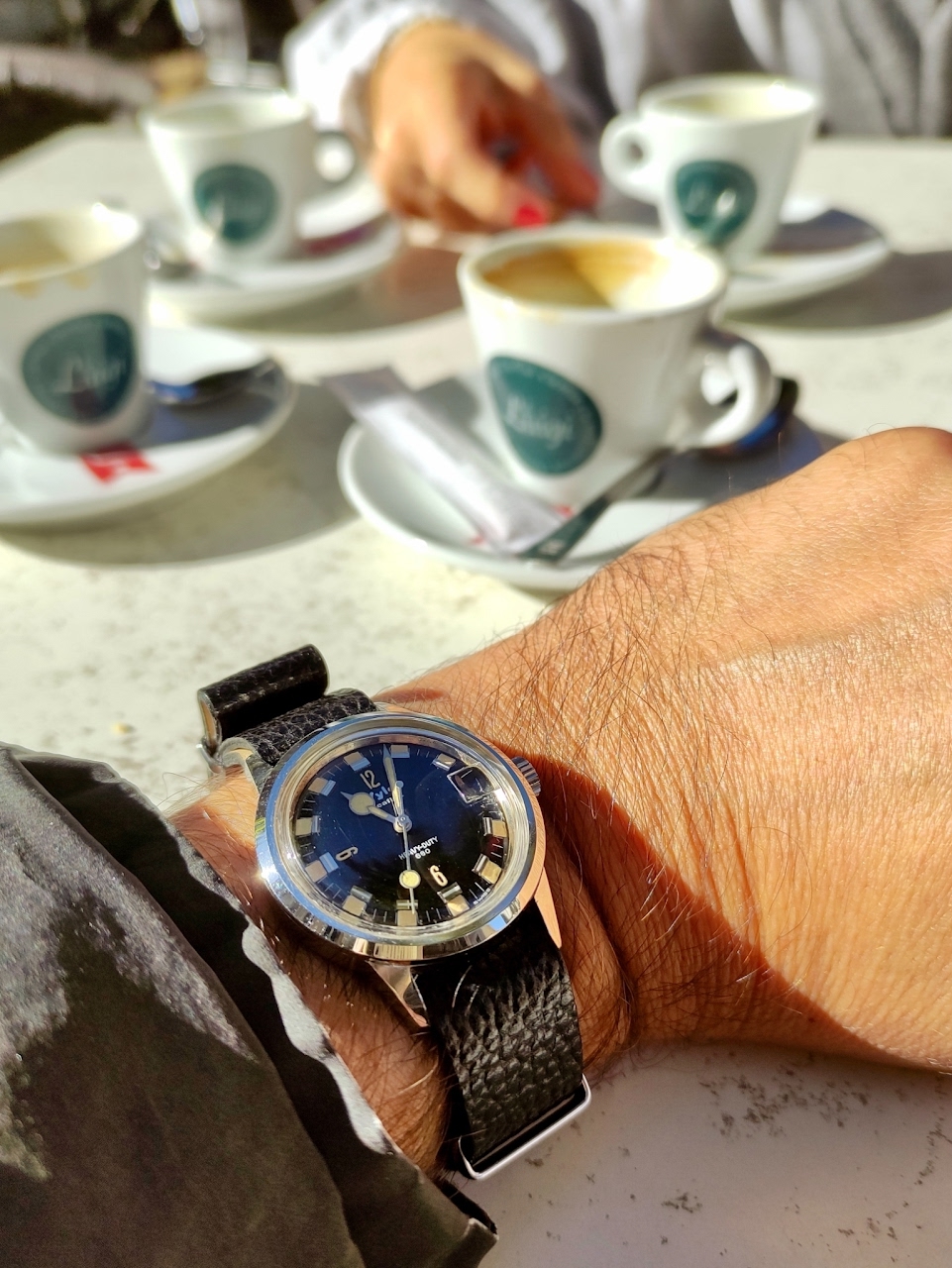 . . . alongside his better half and four cups of coffee - how better to spend Saturday morning?

Next there's aWtchslvr's glinting Grand Seiko in the foreground with a panoramic view of a northern Spanish beach . . . 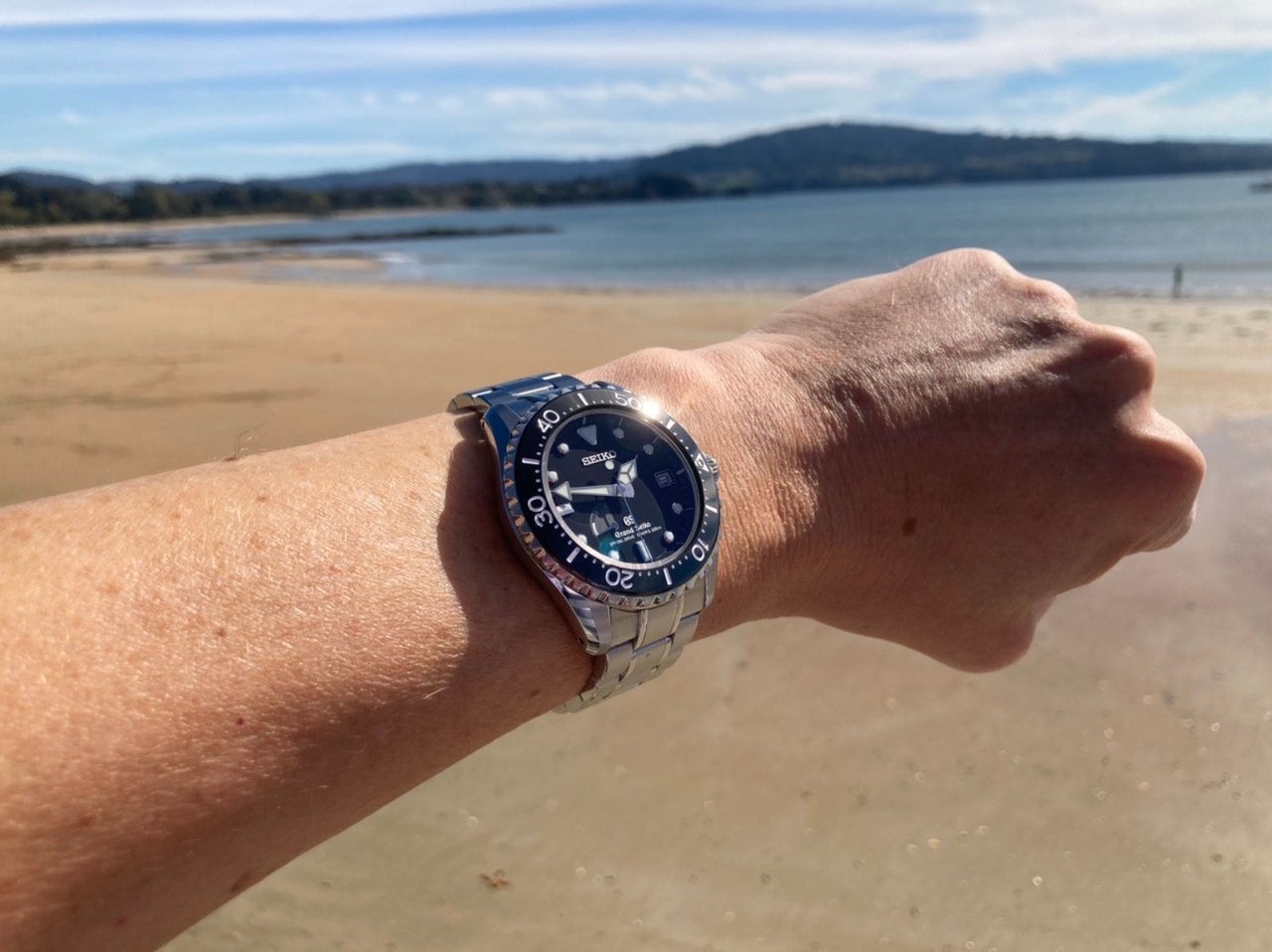 . . . in the background.  Where could one spend a more relaxing weekend?
Ajas' OP with a Carlsberg matching the strap . . . 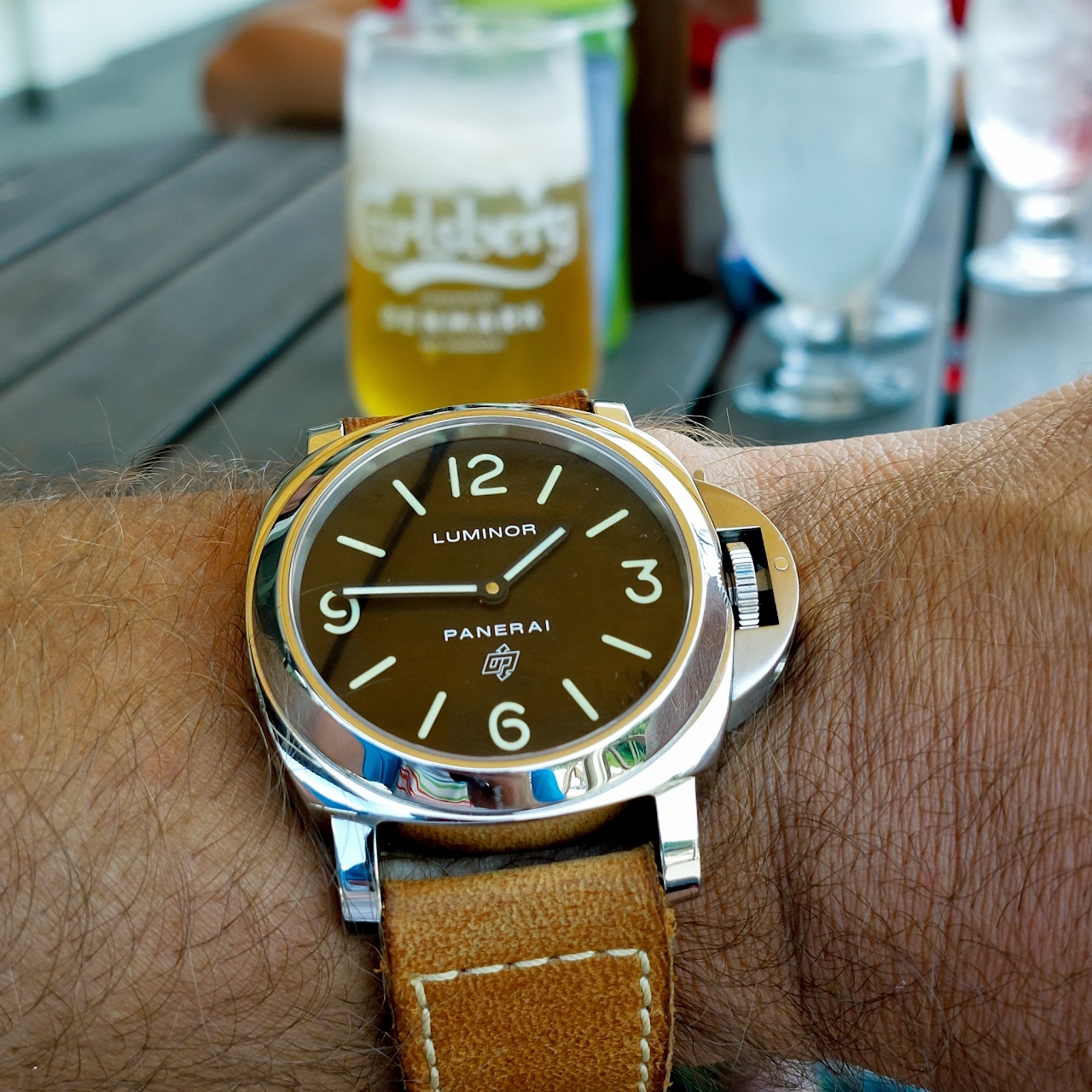 . . . both in terms of color and placement - straight lines could be drawn from the strap to the glass without deviation.  I'd like to credit him with intentionally crafting the image so the lines would coincide.

(And let's face it - there's nothing more relaxing than a cold beer on a weekend!)
You've gotta admire guys like Im6 . . . 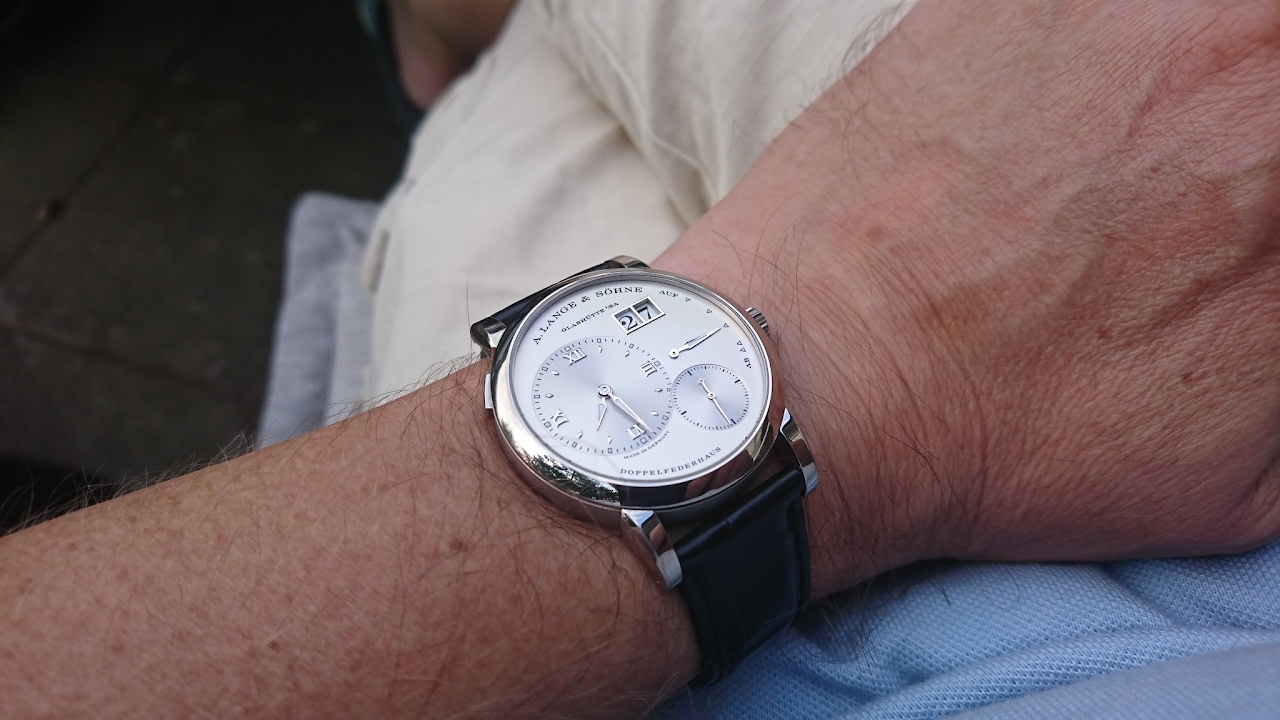 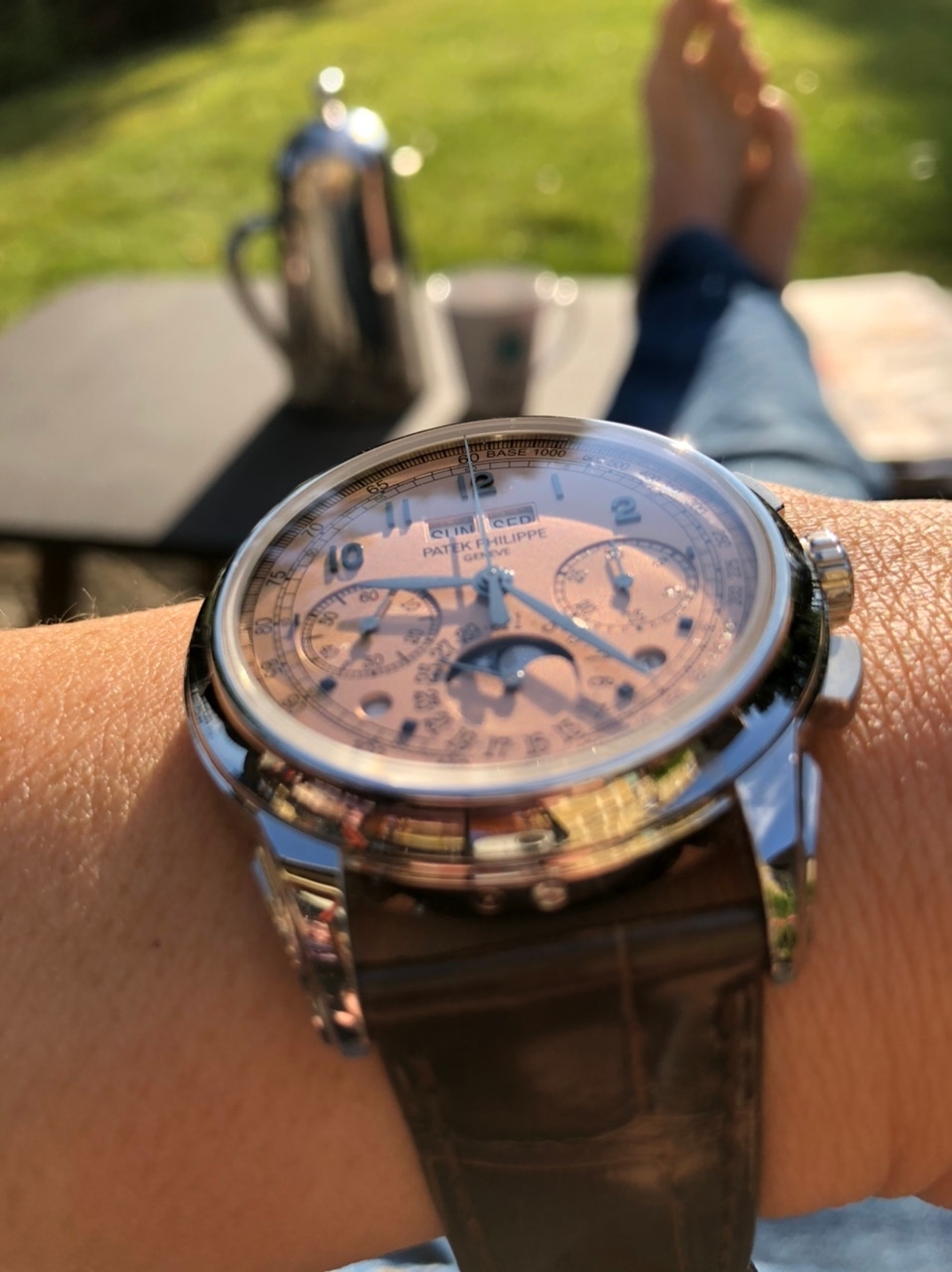 . . . who can relax while wearing watches some of us would think twice about breathing on, much less wearing.  More power to 'em!
But this week, in addition to the usual artistic masterpieces and thematic entries, there were two intriguingly quirky submissions.  Quan's Tudor . . . 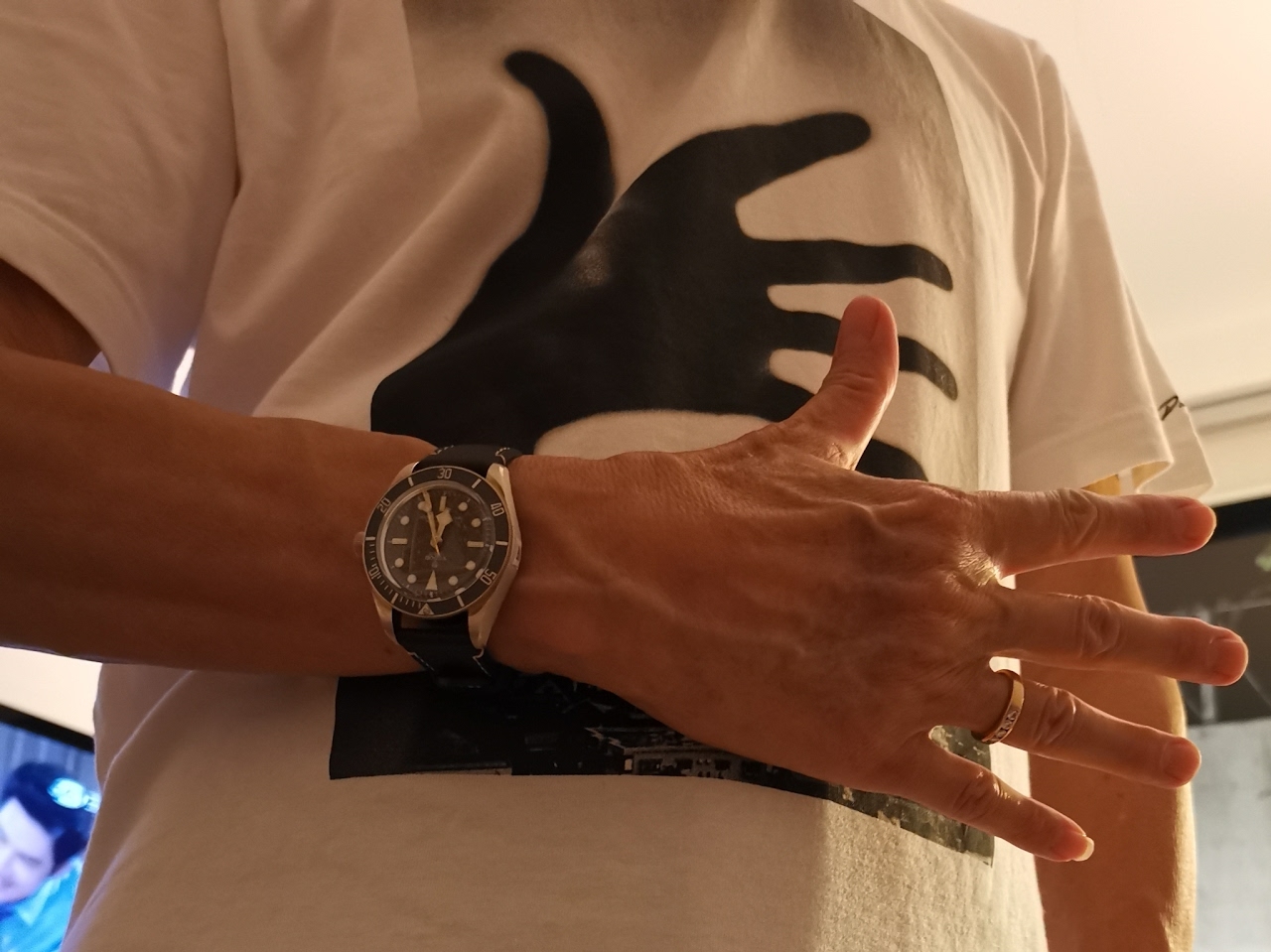 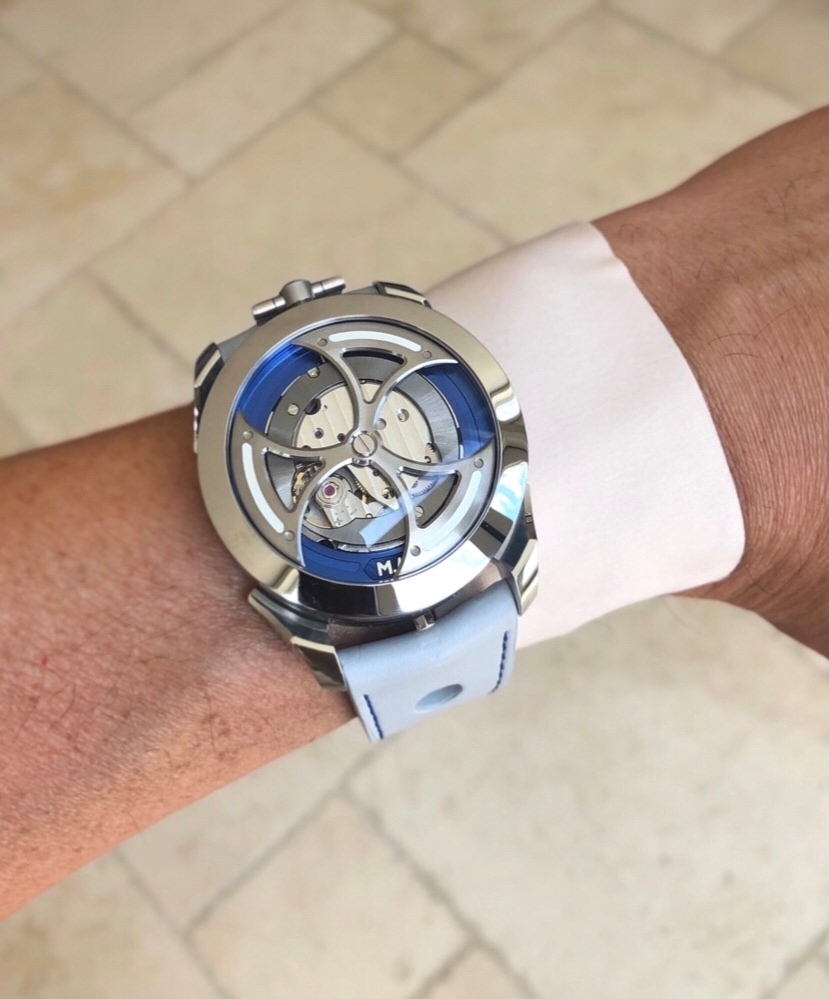 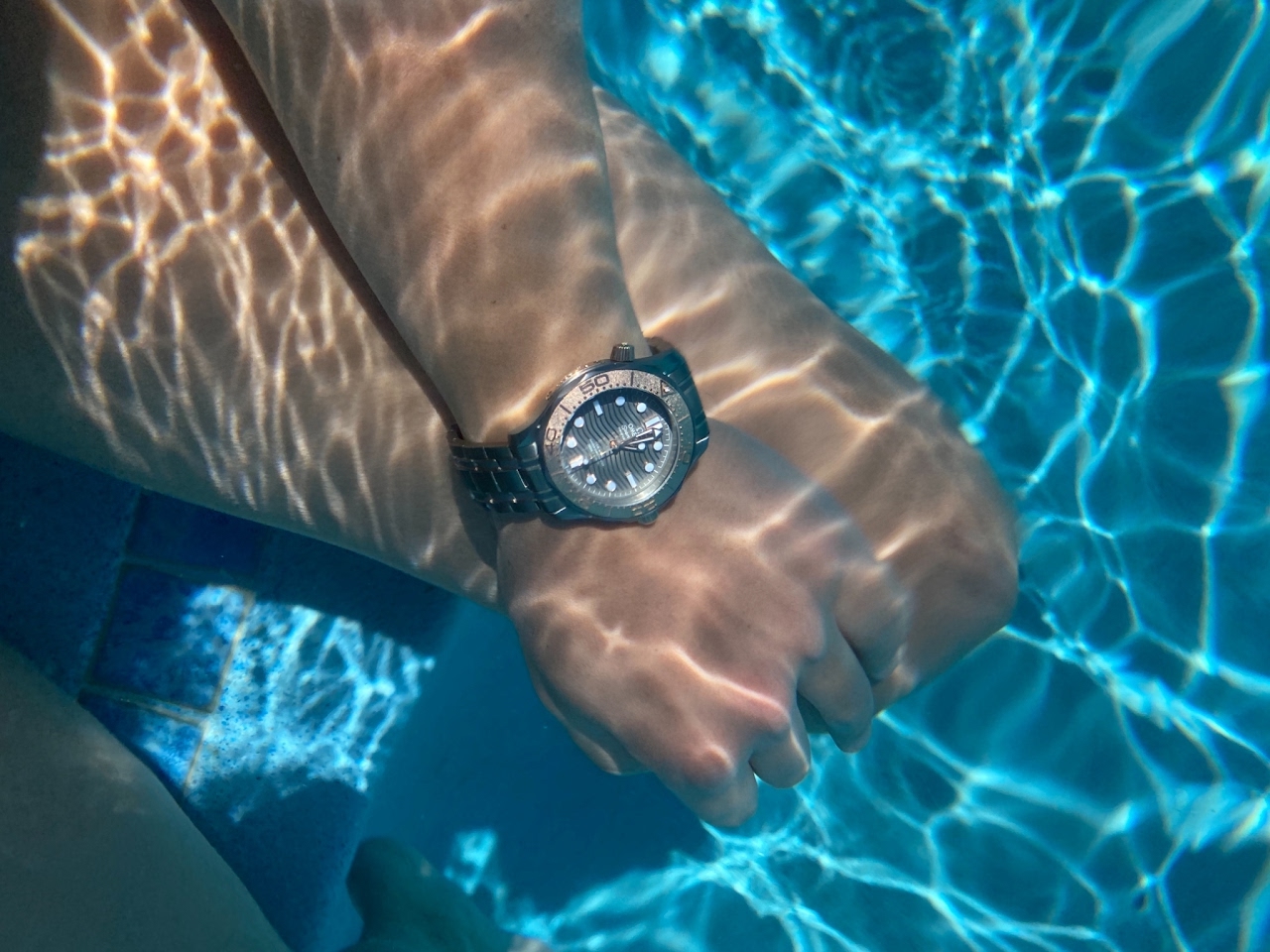 . . . for crafting an image that practically screams "Weekend!"
Art

By: Cpt Scarlet : October 11th, 2021-08:37
and I completely agree with your verdict.
We had so many excellent photos posted this weekend. Thank you.
Congratulations to everyone mentioned and the final three, Wuan, mj23 and our winner Cookies.
Thank you gentlemen for being such good sports !
login to reply

By: Subexplorer : October 11th, 2021-13:28
... including one of my shots among the mentions.
I send you a big hug and my wishes for a great week ahead for you and all our friends here. Best, Abel
login to reply

First of all let me apologize for being the worst judge in the world by missing the deadline by 24 hours. Hopefully you will forgive me but I was abducted by aliens (no the joke question if I have been probed has been asked already) and in outer space I had no internet connection.

More seriously: we suffered a family emergency which now has thankfully been cleared but what made me miss the judge deadline. Sorry for that.

Despite being late I plowed there all these great entries and studied the comments per entry as well.

I knew divers where popular but not that popular. Therefore I have selected Vallura as the second runner up for entering 3 different divers (and at least 2 of them not the usual suspects) and with 3 different m,aerials for strap/bracelet. Very nice.

Runner up is NT931 for posting that beautiful Kurono. A watch I have actually never seen with my own eyes only thru pictures. That was also another reason for selecting this entry as runner up because it shows the global reach of our community.

In first place, those of you who know me a bit might guess already) is Terbaboom. I mean come on, entering not 1 but 2 of my all time favorite brands VC and Blancpain scores points. Of all entries I belief that Blancpain is absolutely number 1 for this week.

Once again apologies for the delay. Cant change it but it is what it is. 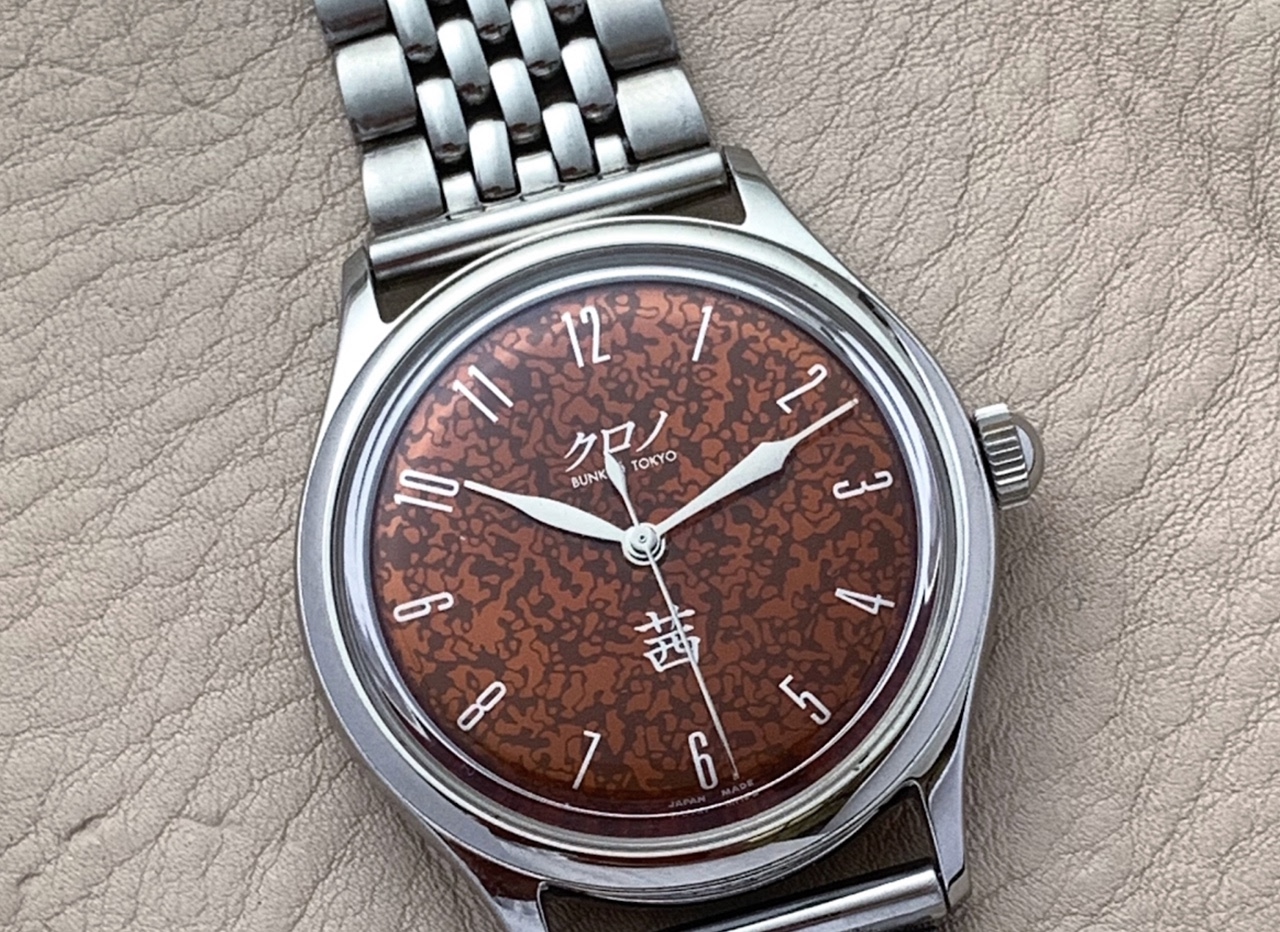 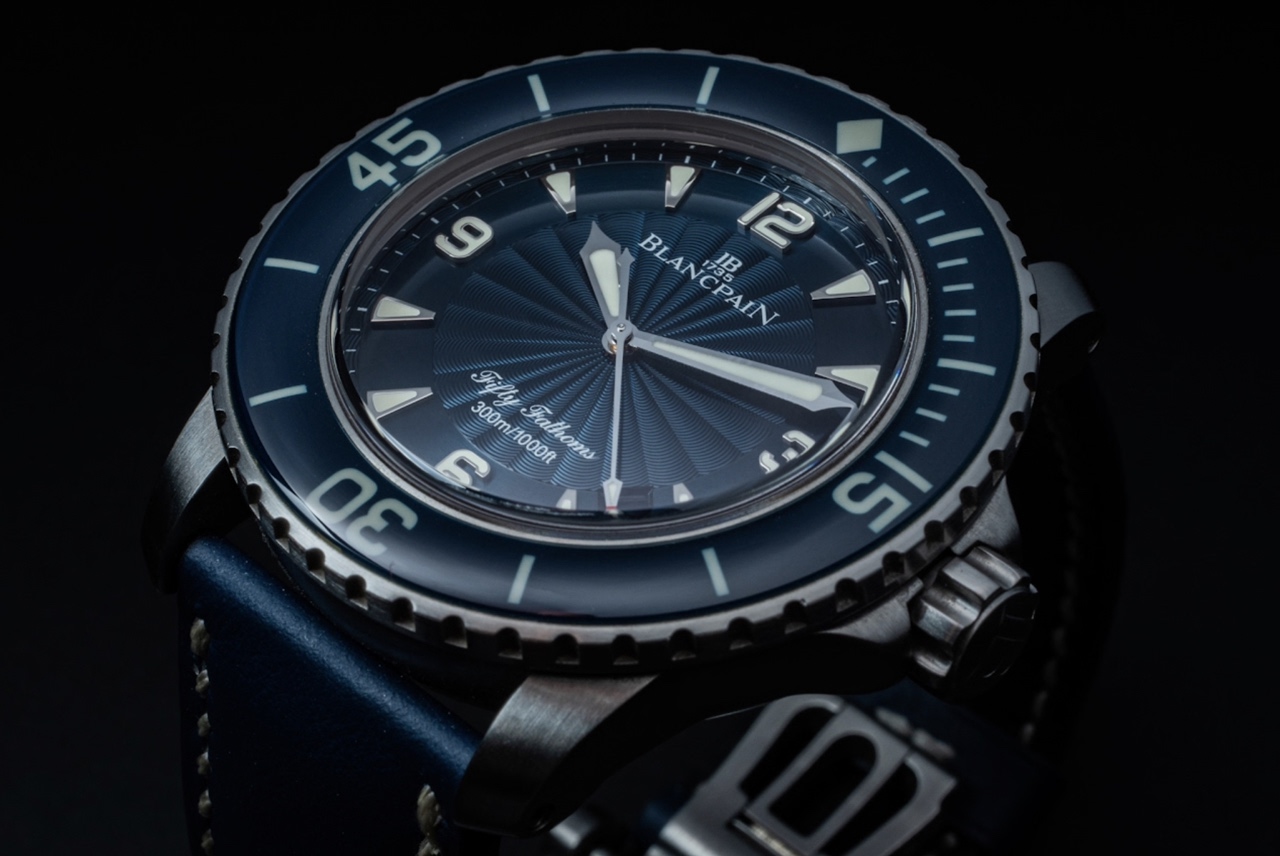