So last Monday I was pretty excited and posted my new Laurent Ferrier Galet Classic, and ... as of Thursday it needs a factory repair.

I got it off a gray market watch flipper for about what these things have been auctioning at recently, box, papers, accessories all included. Case was completely scratch free, so much so that my sleeve put visible light scratches on it within a day that weren't there (just very light marks that you need a bright light at the right angle to see).
The next day I actually noticed when I used the manual winder that the rotor unwound itself! Bad sign, but I hoped it was just a fluke. I wore it on the airplane to the West Coast, and walked around through the airport and some stores.
On Thursday, it was still running fine, until the afternoon where I walked a few hundred feet on the street and noticed later that the watch had stopped completely after that walk and wouldn't wind anymore. Giving it a little shake, I heard a rattling and got a horrible sinking feeling. I noticed that the top screw holding the rotor bridge in had actually pulled out and the rotor was loose! I don't know if there is a second ratchet pawl for the mainspring that has also broken, or if the pawl for the rotor is the only one and the rotor being loose is the only thing preventing the mainspring from winding, but this seems like an incredibly bizarre failure considering I never dropped it, bumped it into anything, or even moved my arm vigorously with it, but the screw decided to come out with the watch on my wrist. If it were dropped before somehow, that screw/threads doesn't seem to be a likely first point of failure.
I emailed LF, then followed up with a phone call to their Swiss number a business day later, and was told their US agent would get back to me (still waiting). Apparently, the ADs are also able to send it to that guy and handle the paperwork for services. Using a magnifying glass, I can't really see any damage to any parts or finish but if it exists...that would be bad, and I don't really want to think about how much it would cost to fix. I'm hoping they take care of it as the watch was originally sold in March 2022 while the papers in the box say the warranty is 3 years, so...
Rationally speaking I imagine they would be curious to figure out what happened to this watch and repair it under warranty, but since a lot of money is at stake I can't help but feel nervous. I can lose a few k without hurting too much but it would leave a pretty bitter taste in my mouth if I had to pay out of pocket, and even though I love the watch's design it would sort of ruin the emotional connection. 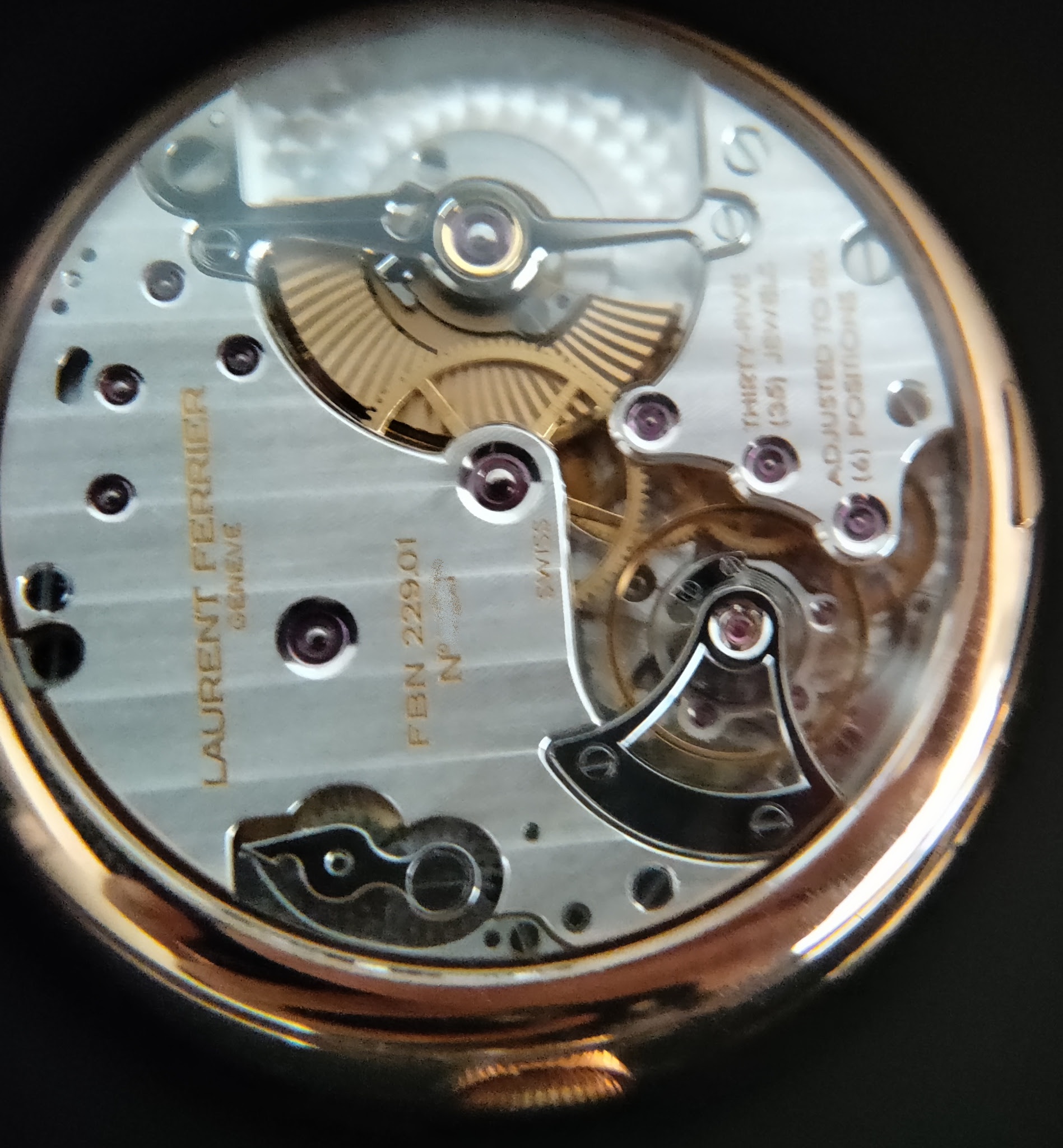 Monday, before issues. Shot through loupe. 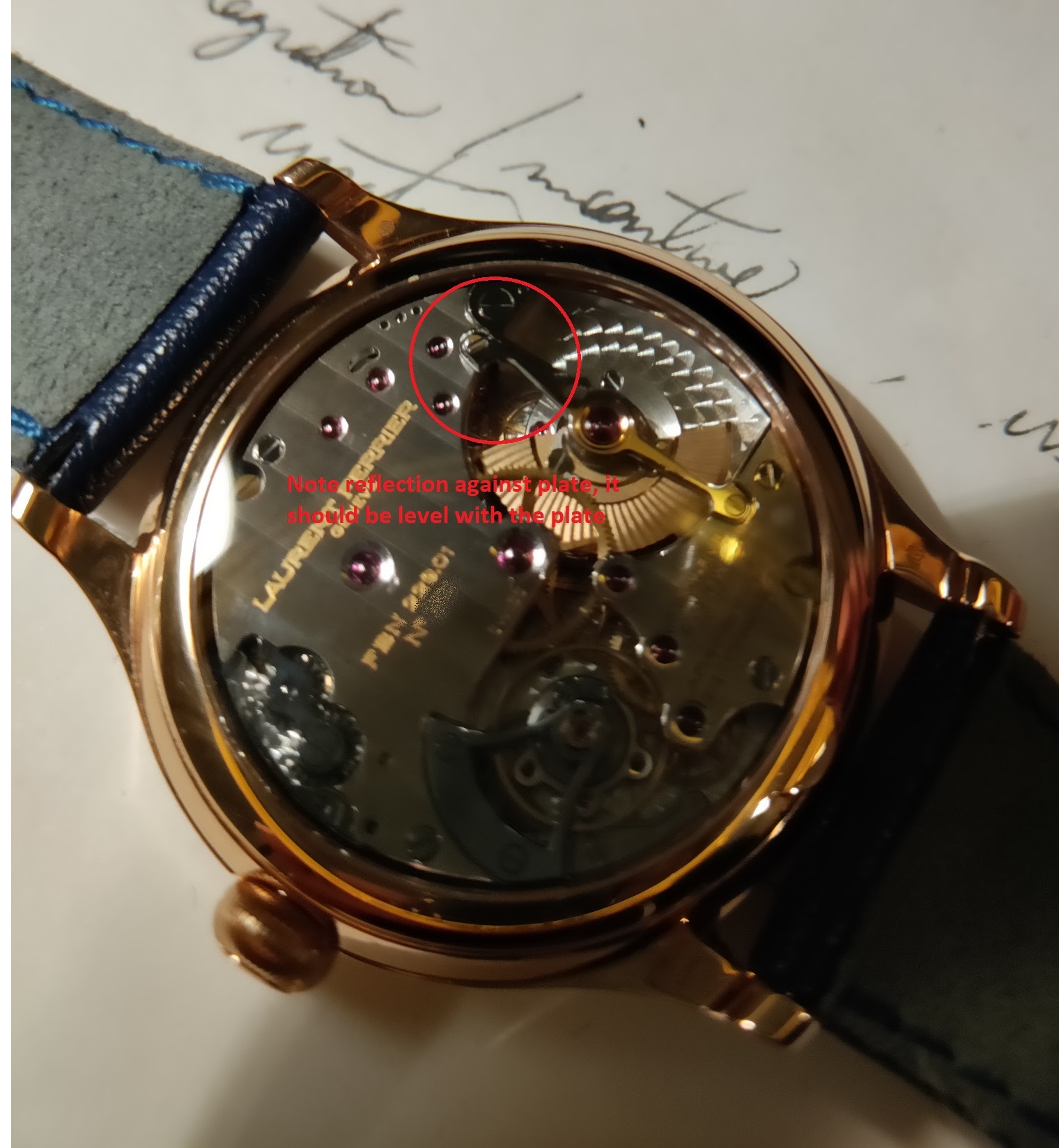 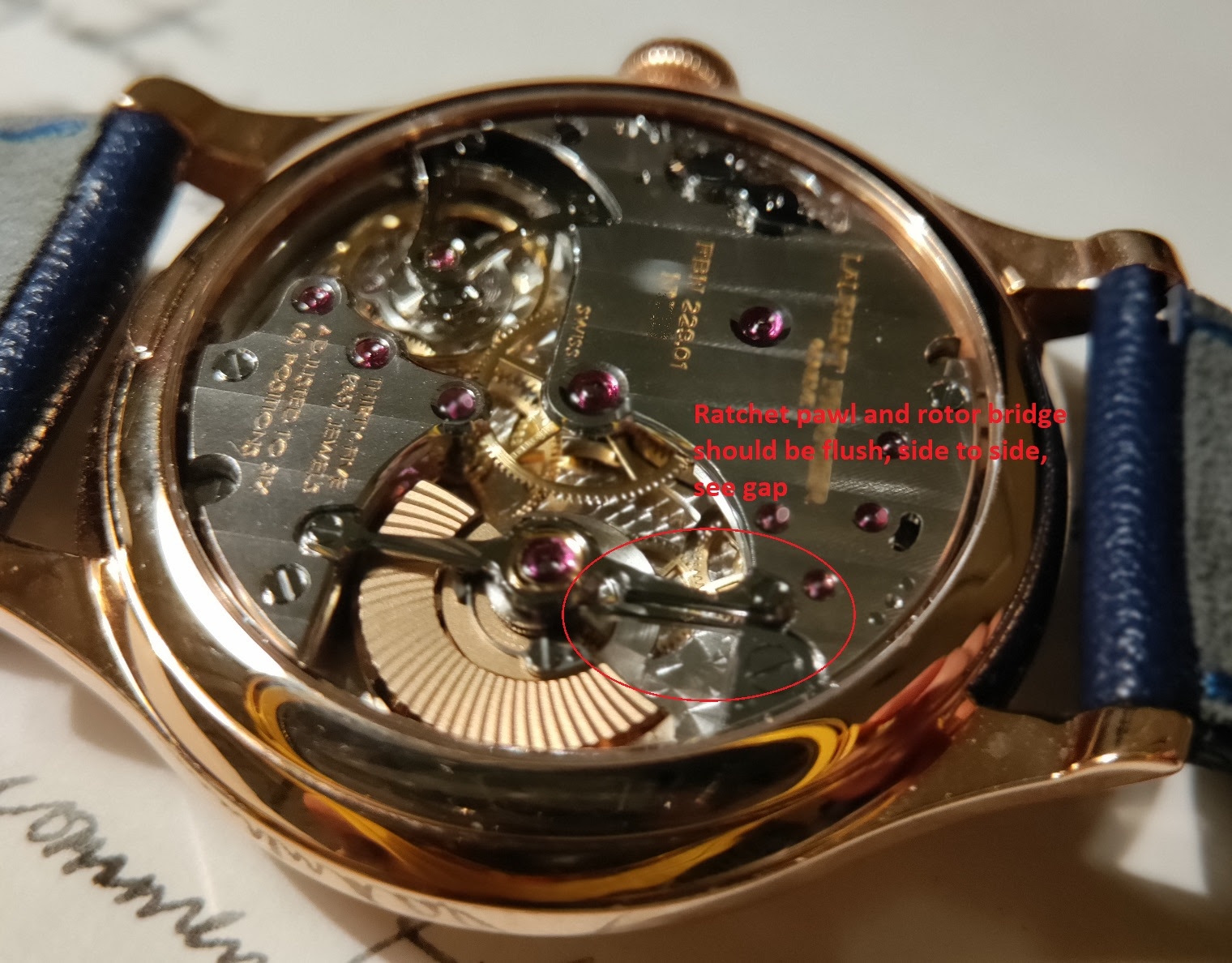 (I ordered a macro lens...but election mail clogged up my mailbox and it got sent back to the seller XD)

By: convexproblem : November 23rd, 2022-08:51
So last Monday I was pretty excited and posted my new Laurent Ferrier Galet Classic, and ... as of Thursday it needs a factory repair. I got it off a gray market watch flipper for about what these things have been auctioning at recently, box, papers, acce...
login to reply

Sorry to hear about your troubles.

By: mrds : November 23rd, 2022-09:37
It’s always a drag on the joy one feels when that sort of problem happens in a new watch. I hope LF will resolve the issue quickly. For your comfort, I once had a problem with my Galet Square and LF was very courteous and professional to fix it. They did ...
login to reply

Thank you for sharing your experience!

By: convexproblem : November 23rd, 2022-09:48
It's comforting to hear you had a good experience. I would certainly hope it is that way considering the price of these beauties.
login to reply

What a pity. I feel for you, but let's see how Laurent Ferrier will take care of that. Keep us posted!

Sorry to hear this. Hope it gets resolved soon without breaking the bank.

By: TeutonicCarFan : November 23rd, 2022-19:31
It isn't just grey, although I'd be curious how a warranty gets honored through grey. Do they need to be initiated by AD to be valid? I have had 2 different watches direct from boutique need servicing 😑 so not just grey.
login to reply

I called a few ADs and they said they can send it in for me even though I didn't buy from them.

By: convexproblem : November 23rd, 2022-23:45
Apparently, if the AD sends it in, the factory just looks at the serial number to determine if it's still in warranty. When I called LF, the lady on the phone said their agent would get back to me, so I assume it's possible to directly deal with the facto...
login to reply

Good luck and keep us posted

To bad to hear this problem. Hope it will be fixed soon amd you can enjoy this beautiful LF again like you want

Sorry to hear about that. It is what came sometimes happen even if it feels disappointing.

By: Weems@8 : November 23rd, 2022-20:45
I was thinking about my worries about watches powered by a micro rotor. Not that i am concerned, but i am relax by the idea an automatic cq a Baumatic use a normal sized rotor to help a mainspring keep up wound. This while i like the L.U. Chopard peaces w...
login to reply

I think this is more of a freak issue, we'll see how LF takes care of it I guess

By: convexproblem : November 23rd, 2022-23:42
A micro rotor isn't less reliable than a full size rotor since they're mechanically the same thing, one is just smaller. They both need to mount the eccentric mass somehow. In this case, the mounting failed. I have my eye on a Parmigiani Tonda 1950 with t...
login to reply

You have every right to be disappointed but don't be discouraged just yet, see how it plays out. I'm hoping it all concludes to your satisfaction.

Been in your shoes...

By: jmpTT : November 24th, 2022-02:29
I've had to send in a few watches I've bought secondhand, after screws or other parts came loose. The watches were always well-packed, but sometimes these things happen. It's very frustrating, the first few months of owning a new watch are the best. I agr...
login to reply

As all mentioned of course it must be quite frustrating

By: Mike H : November 24th, 2022-18:42
LF watches are normally quite reliable but such an incident can always happen. As all said I am also confident the outcome should be ok for the repair to go under warranty, fingers crossed... Keep up posted...
login to reply