When the suspects were spotted they jumped the curb with their car “almost plowing down several pedestrians “ These are the ones suspected of the recent theft and shooting September 16th at Philip Chow. Link to article 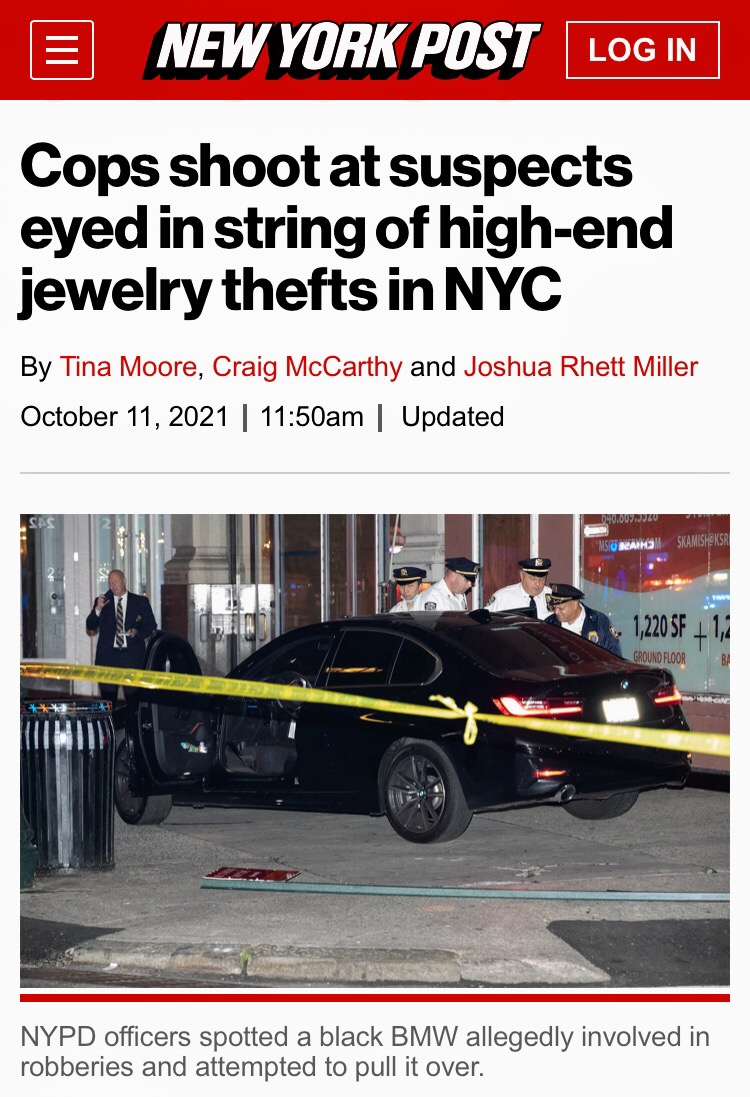 By: oyster case : October 11th, 2021-18:40
When the suspects were spotted they jumped the curb with their car “almost plowing down several pedestrians “ These are the ones suspected of the recent theft and shooting September 16th at Philip Chow. Link to article ...
login to reply

Wow, brazen! I'm interested to learn more about those two women walking by the restaurant; how can I reach them for comment?

ha! I don't know about those two

By: blau : October 11th, 2021-19:04
They both appear to be wearing sleepwear out on the street. Very suspicious!
login to reply

Post covid fashion in NYC was something else this summer

The most suspicious picture is actually three below, where the suspect is the "second from left"....hence the police officer?? ;-))

Haha 😂 pretty sure it’s the guy with the bloodied face, poor kid 🥲

Yep, that was *definitely* my guess too -- that HE is the criminal ;-)

Thanks for sharing the news, these criminals seem to have been related to several violent watch robberies recently -- great that they finally got caught, and let us hope they will go away for a long time! ;-)

Brazen indeed! Unfortunately only one suspect was apprehended, the other fled into a park

Correct -- of course let's hope that also the other one be taken into custody real fast, now that they know who he is ;-)

Of course, no problem👍

By: Spangles - Dr. Tabby : October 11th, 2021-23:48
Only a matter of time before the guy who ran is caught. There are literally cameras all over the area. I don't mean that in a vague way, I mean literally there are cameras covering a lot of public spaces. Here's an article pointing out the negative side o...
login to reply

By: oyster case : October 12th, 2021-00:29
have been active for months, including a murder. The arrested suspect is only 19…likely many others in the wings to take his place.
login to reply

The trinidarios or whatever are a national gang around for decades,

By: Spangles - Dr. Tabby : October 12th, 2021-00:42
So, yes, ending these guys will stop the particular set of watch crimes, but no one is claiming all crime will end. High-profile crime is stupid, I doubt the senior gang members approved.
login to reply

Maybe the only crime that matters to the NYPD?

Grew up in NYC…

By: Spangles - Dr. Tabby : October 12th, 2021-13:24
Murders and shootings have gone up in NYC during the pandemic, but they are ONE QUARTER AND ONE THIRD, respectively, of what they were at their peak in the 90s. Source: www.bloomberg.com For all its problems, New York remains the safest large city...
login to reply

+1 Compared to the 90's NYC is super nice/safe. While recent events are unfortunate, they are still relatively rare. With all the cameras and traffic I'm surprised it took so long to get these guys.

Actually assaults are up.

Have it your way

By: myles721 : October 13th, 2021-02:45
assaults down but rape is up. This is a quality of life issue and as I said unless you have put in the time I have (my whole life) you do not get to judge my opinions about NYC. Have a nice day.
login to reply

Opinion? The overall violent crime rate (incidents per capita) in NYC is a fraction today of what it was in the 90s.

By: Pradad2003 : October 12th, 2021-15:18
Sad part is that this gentleman will be back on the street within few days with no bail. He will miss his court appearance because he will move down to Florida and enjoy himself. Question : What’s is his downside ?
login to reply

Rule #1, don't go out late at night with expensive watches...

By: patrick_y : October 15th, 2021-22:21
Yes, we bought these watches to use them. But wearing them does make us an easy target! Let's not make ourselves easy targets!
login to reply