Feb 05, 2013,11:33 AM
SIHH 2013 PuristSPro Report: Officine Panerai (M. Bosse & PuristSPro Team)
Panerai is one of those companies I admire even though their watches are (in most cases) not my cup of tea. Panerai is pretty much looked (historically speaking) on the two basic case design, the Radiomir and the Luminor. Nevertheless they manage to keep a wide audience of collectors feverishly awaiting SIHH to get a glimpse on the novelties. How is that possible? Well, I think this has three elements:
As Panerai's CEO Angelo Bonati recently stated in an interview with Alexander Linz that Panerai's main lines of innovation lie within the realms of material and movement and not so much on design (although there is a constant development albeit within strict limits). Panerai does not aspire to produce ultra-flat or highly complicated pieces, this is just not in their DNA, and Mr Bonati knows to respect this.
This post is simply intended to provide a commented overview on the - to my totally subjective view - main (or most significant) novelties this year. A comprehensive list of the novelties has already been posted by Kong.
A prime example of the above is one of Panerai's highlights 2013, the Panerai PAM526 Luminor 1950 Regatta 3 Days Chrono Flyback Titanio 47mm. This watch is entirely conceived with the tasks yachtsmen are faced when participating in regatta challenges, i.e. the simple and precise timing of the regatta start while being exposed to the to the unpredictable nature of the elements with their often tens of metres long yachts and an immense sail area exposed. 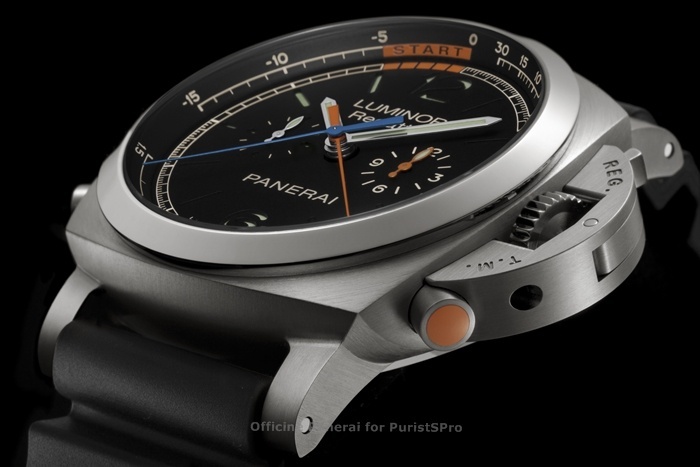 The watch offers a remarkable simplicity of use: To avoid wasting of precious seconds preceding the start of a regatta due to problems with timing gear, the watch displays the remaining time - in minutes and seconds - until a regatta starts. This is done with the central orange chronograph minute hand and the central seconds counter. 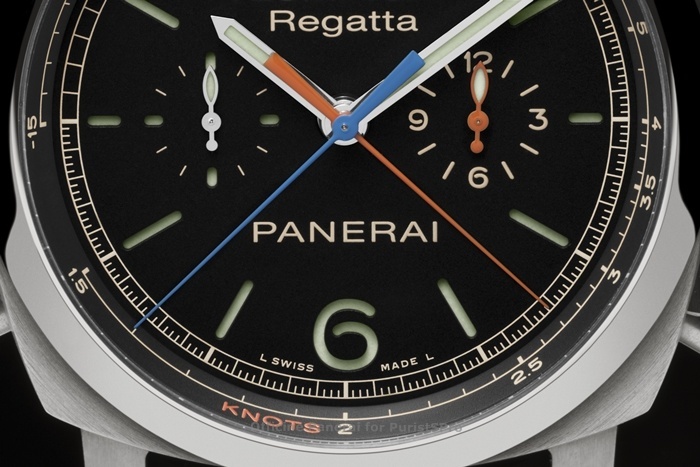 The setting of the count-down time is equally intuitive: One adjusts the orange minute counter with an orange push-button at four o’clock backwards, in 1-minute steps, until the correct timeframe (= length of the countdown) is set. On starting the chronograph with the chronograph stop/start button at ten o’clock, the relative hands begin to move, indicating first the minutes and seconds which remain until the start. Once the countdown has finished, the time elapsed since the start of the race is counted. Stop and resetting is achieved with the stop/reset button at 8 o'clock.
The PAM 526 is driven by the new P.9100/R automatic chronograph calibre, an automatic Flyback chronograph calibre with the above new functions. Technical specs: 13¾ lignes, 9.55 mm thick, 37 jewels, 28,800 alternations/hour. Power reserve 3 days, two barrels. 328 components. 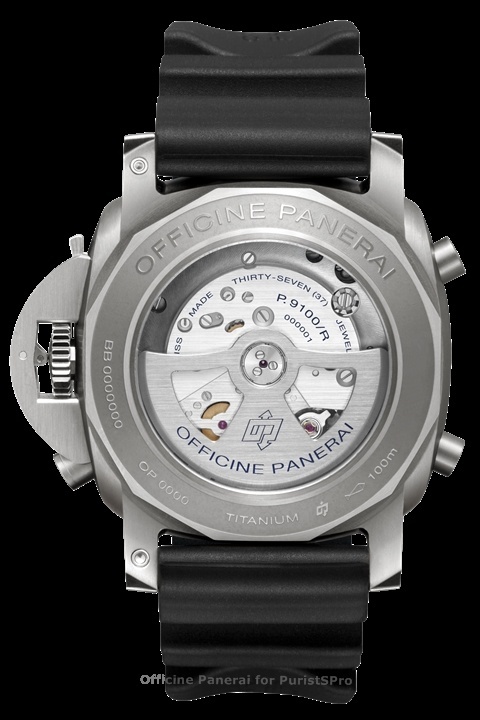 In keeping with the theme of innovations under the hood, Panerai presented the new movement family Cal. 5000 which are simple handwound movements with a 8 day power reserve. As Jester already wrote they will eventually replace the older ETA-based movements in the entry-level line. Here is a comparison between the PAM111 (left, ETA-based) and the PAM510 (right, Cal. 5000-based): 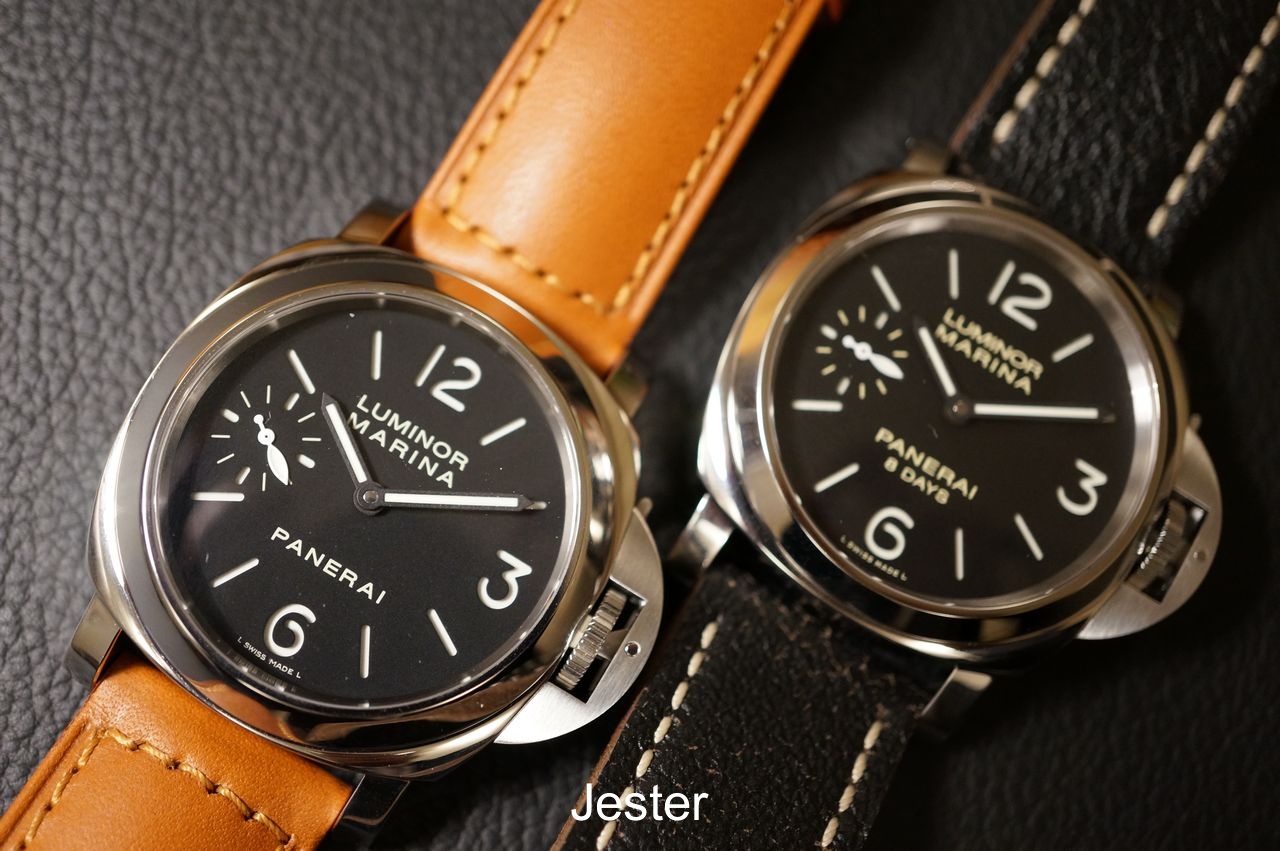 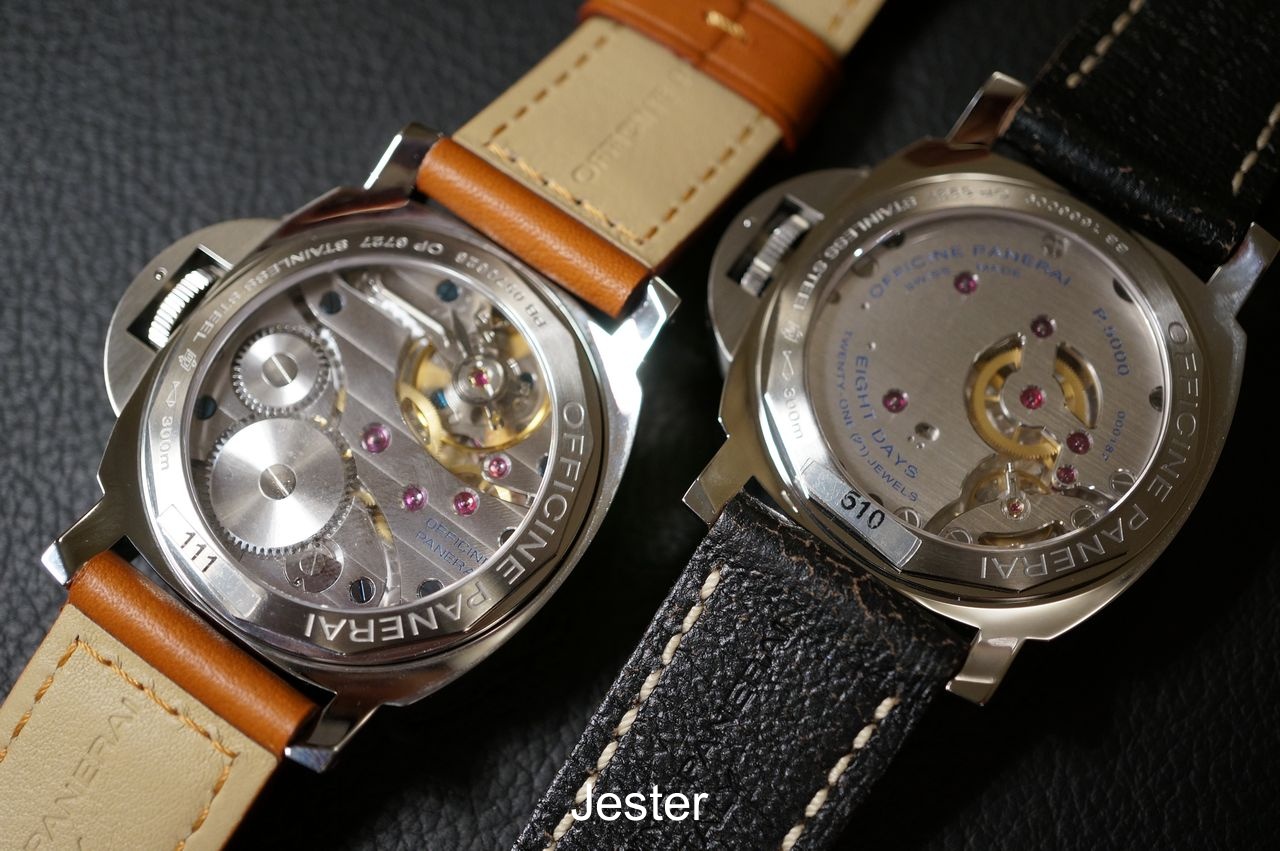 Next in line, and this already marks the transition towards variety in terms of materials, I'd like to present the three variations of the Panerai Luminor Submersible 1950 3 Days Automatico 47mm. Here we have, from left to right, two versions of the simple automatic, one with a black ceramic case (Ceramica; PAM508 ; limitation 1000 pieces) and another one in titanium (Titanio; PAM367; limitation 500 pieces). One the right is the PAM507 Bronzo in, yes, a bronze case (CuSn8, an alloy of copper and tin in the pure state). This one is limited to 1000 pieces. 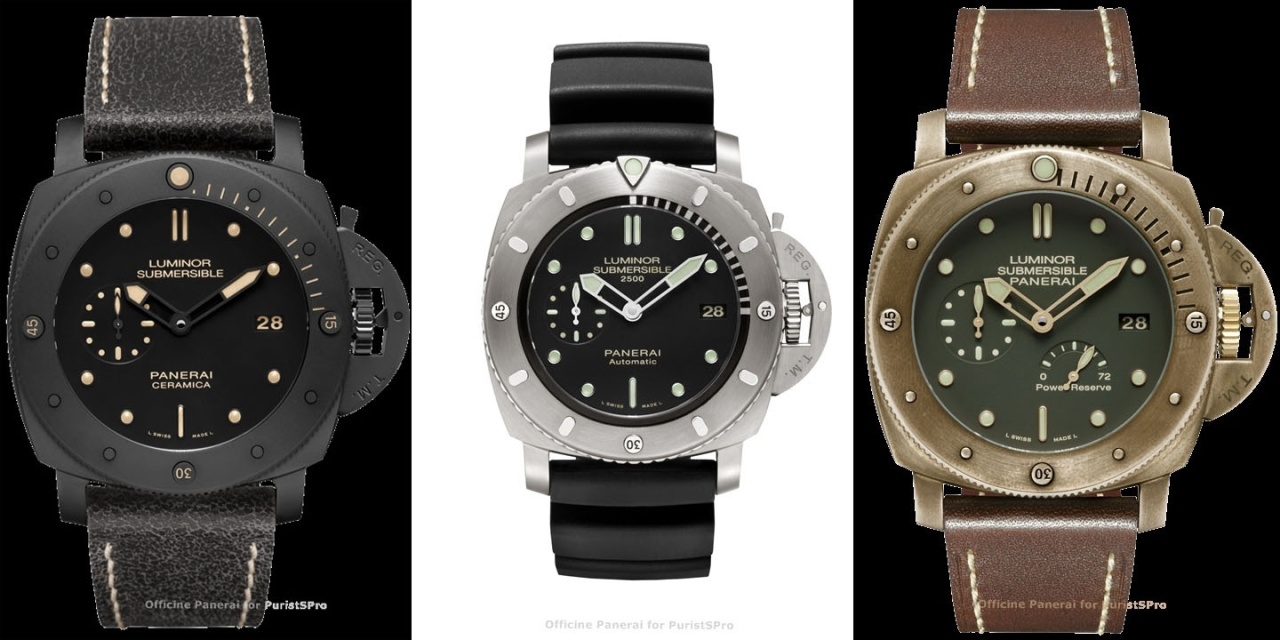 Please note that the watch in the middle also carries a small but interesting feat: Thanks to a helium escape valve and a 5.9mm thick crystal it is water resistant up to 2500m.
All watches are driven by an automatic mechanical movement, a Panerai P.9000 or P.9002 calibre with two barrels (PAM507). 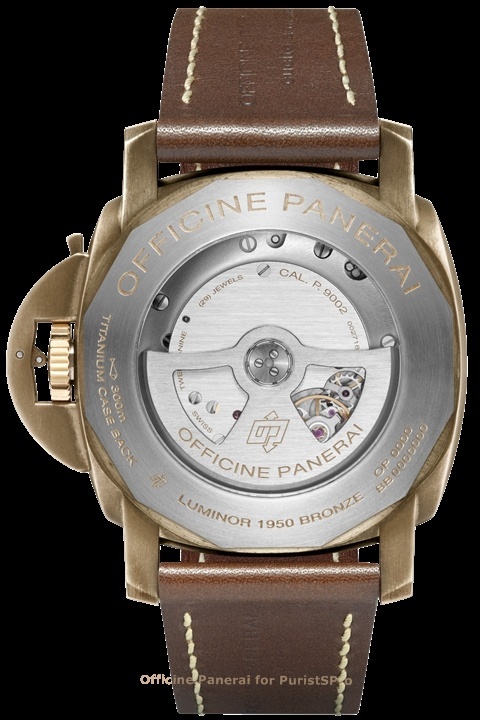 Finally we slowly move over the subtle modifications in the design area, is the Panerai PAM512 Radiomir 1940 42mm. 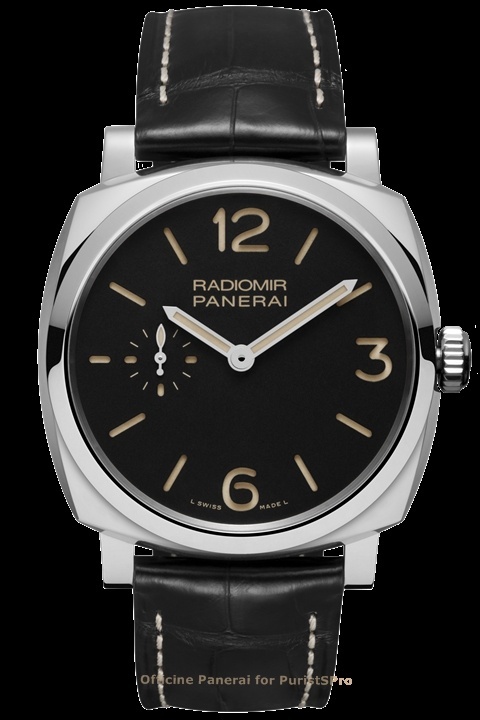 The watch is basically the essence of the Radiomir and the Luminor. It carries the dial, bezel and the crown of the former and interprets it with the robustness of the Luminor collection. Very successfully in my book, I never was a fan of the wire lugs. 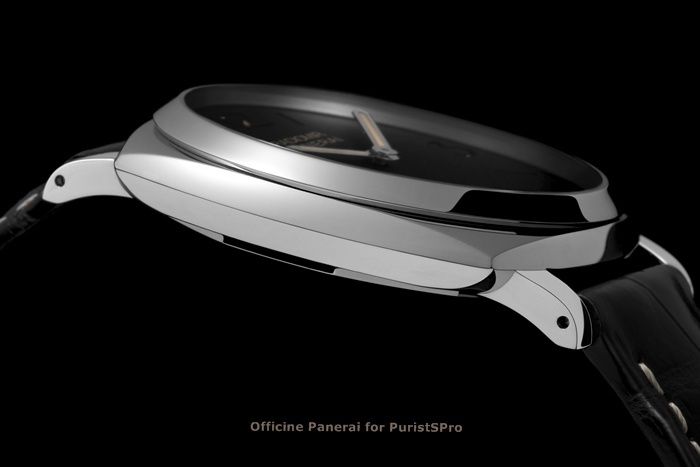 Visible through the window in the sapphire crystal window which opens on the back, the (for Panerai) quite flat movement P.999 has a power reserve of 60 hours and a balance which oscillates at 21,600 alternations/hour (equivalent to 3 Hz). 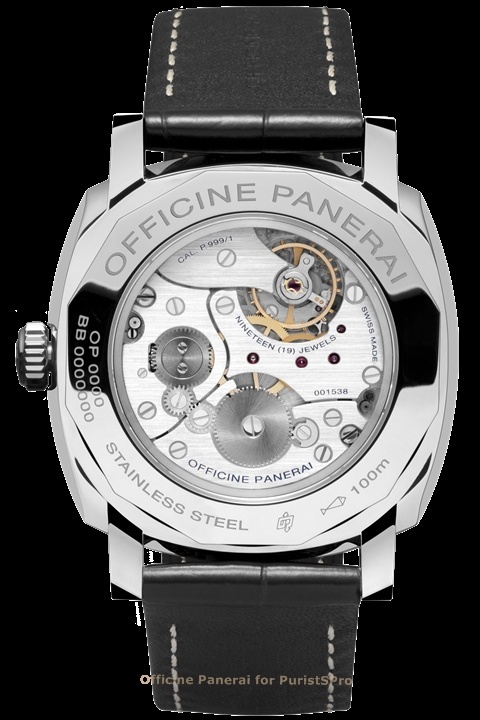 The movement comes in two versions: The version for the steel it is adjusted by simple curb pins. In the red gold version however the finish is more advanced (bridges are chamfered, smoothed and polished), and the active length of the balance spring is adjusted by a swan-neck regulator: 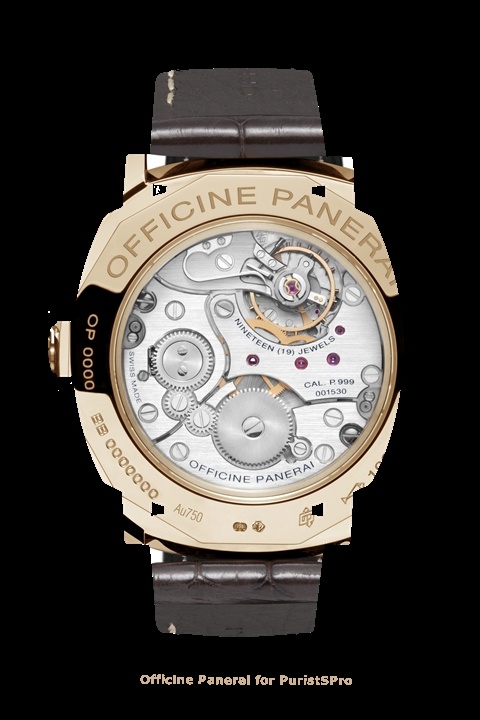 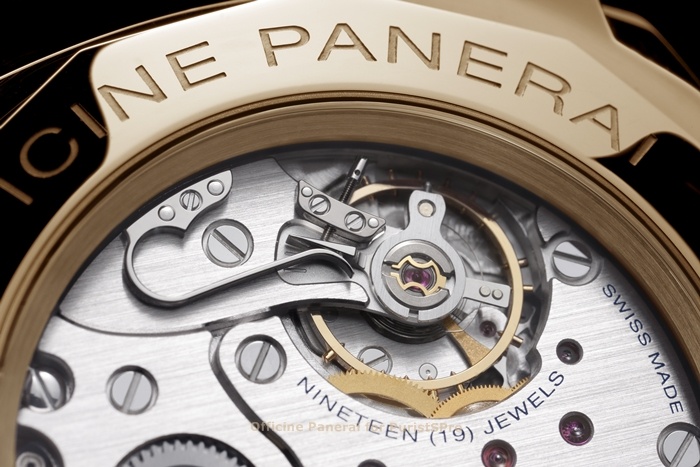 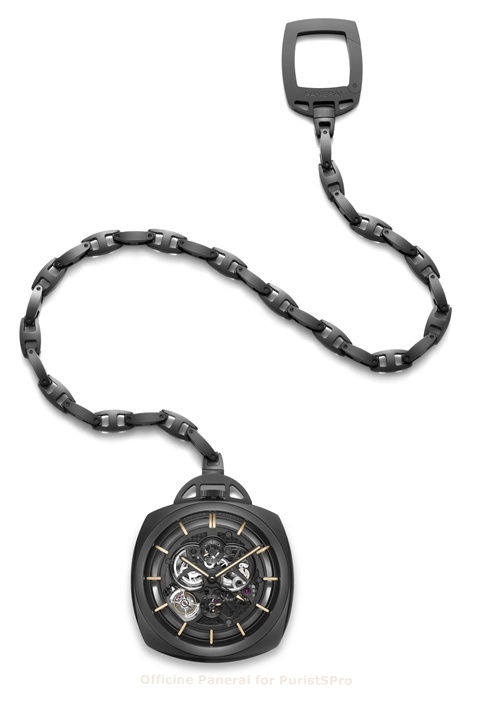 I really applaud them for creating this piece! A pocket watch with a tourbillon, now this makes sense (recall: coherence...;-)). This watch features the Cal. 2005 in a skeletonised variant, Cal. 2005/S: 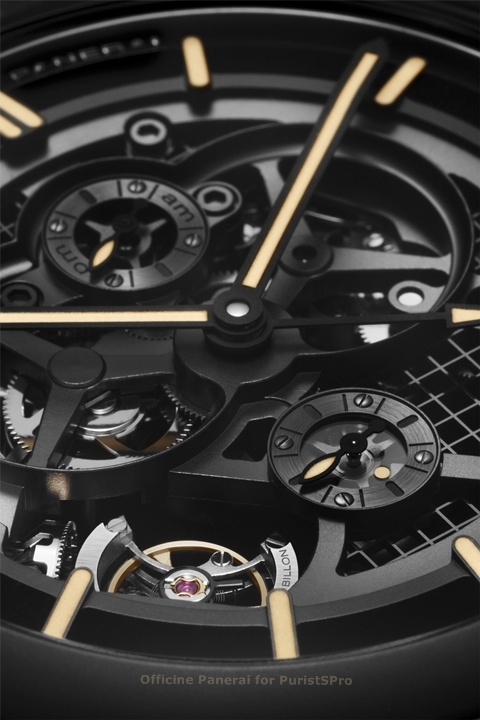 Its main technical appeal lies in the very proprietary tourbillon construction whereby the cage carrying the escapement rotates longitudinally and not, like most others, axially. 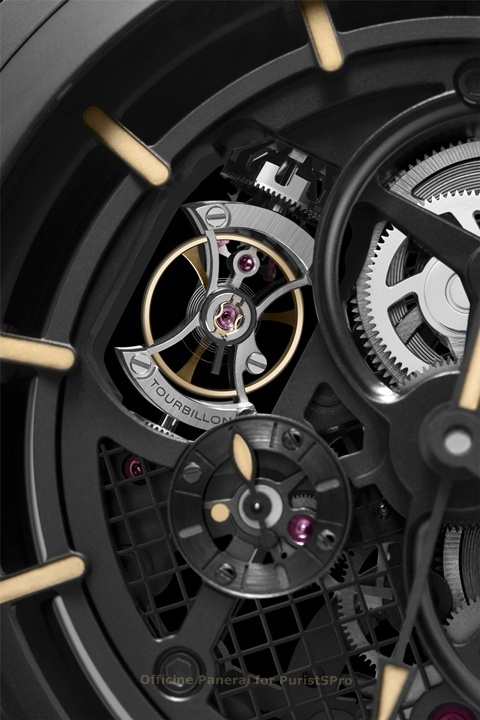 What I really like it the dedication of this watch: It is not devoted to anything in the immediate history of Panerai, the brand, but to the “pocket watches by the main Swiss makers” that were sold at the Orologeria Panerai in Florence since the start of its activities - chapeau to Panerai for this generous message!
So, to conclude, I think that Panerai masterfully played its virtues well this year. Lovers of all collections are treated well, whether they crave for new movements, refreshed designed or specific materials. Panerai also considered the different price ranges.
Overall, and this is indeed a message worth reporting, they managed to keep true to their identity. This is not a small feat by any means!
Cheers,
Magnus
===
To post comments, please go to MTF's original post in Panerai forum, panerai.watchprosite.com
This message has been edited by AnthonyTsai on 2013-02-05 19:57:43