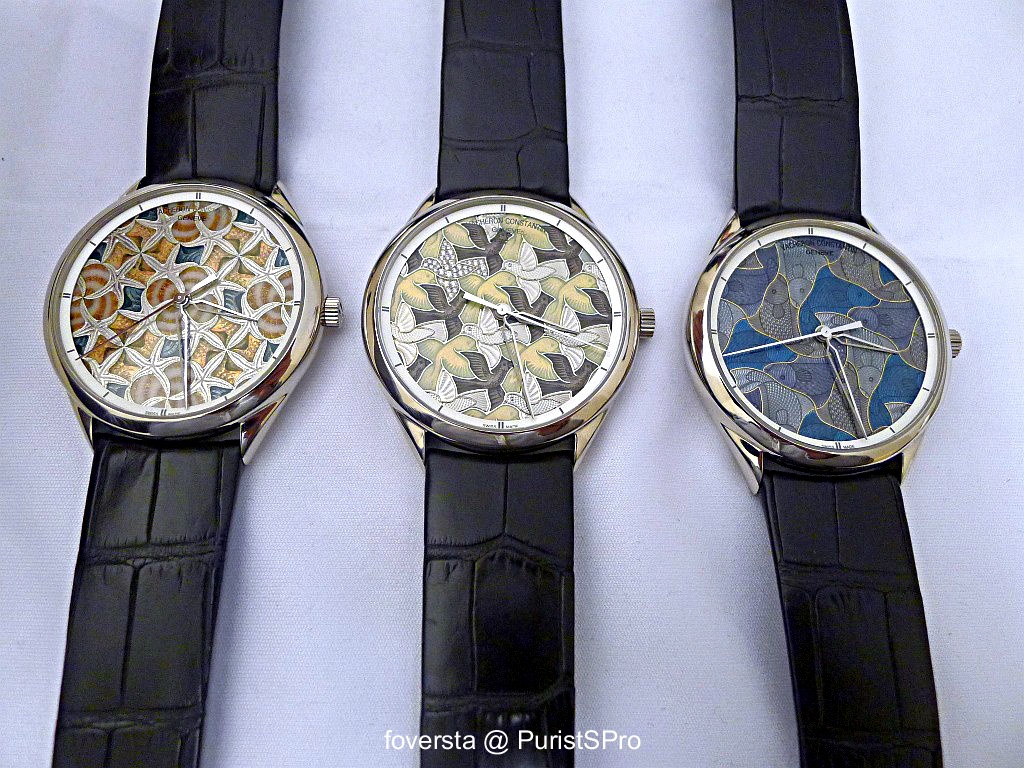 'The Fish' possibly being the favourite of PuristS and featured guilloche and cloisonne enamelling. 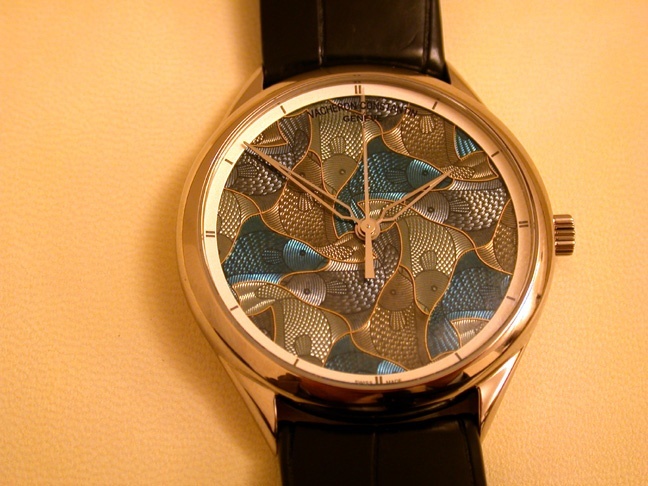 Special horology technical note must be made of the Patrimony Traditionnelle Tourbillon 14 days at SIHH 2012. 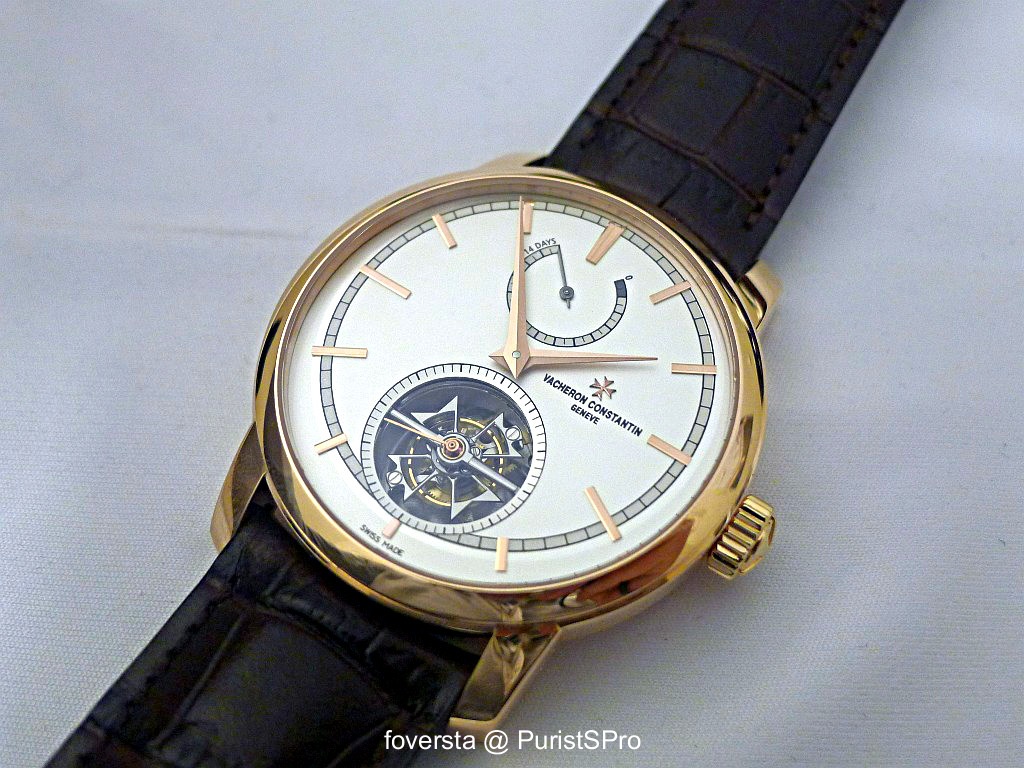 Vacheron Constantin is continuing its tradition of making beautiful art pieces for the wrist both technically and in the fascinating art of enamel. In recent years, Vacheron Constantin made watches with beautiful miniature enamel dials, Japanese Maki-e dials, and supremely complex watches.

Vacheron Constantin pays a new tribute to women in 2013 dedicating their best work by combining the beauty intrinsic in artistic craftsmanship with the technical mastery of the mechanisms of time. Three major collections each offer their own interpretation of time in the feminine gender.

The Malte collection extends the celebration of its 100th anniversary with a seductive emphasis of its curvaceous case.

Patrimony is home to original creations in the Contemporary and Tradition styles that showcase the jewellery-making skills of the manufacture’s gem-setters. 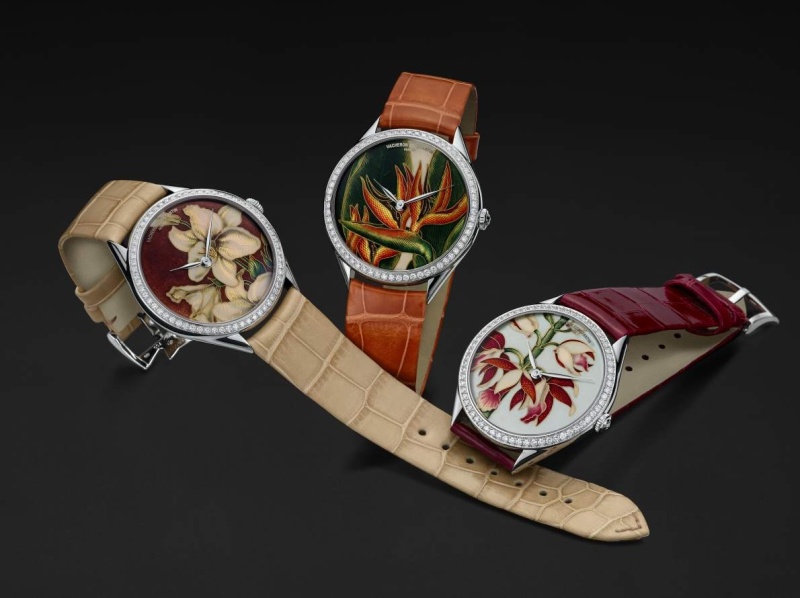 This trilogy pays a vibrant tribute to the delicacy of English botanical illustration in the 19th century. The plants, taken from Robert John Thornton’s 'The Temple of Flora', published in 1799, grow over the dials of watches that combined the artistic crafts of enamelling, guillochage and gem-setting.

“Temple of Flora” was an illustrated book of the different species of plants known to the world at the time. It featured illustrations of various species commissioned to the most talented botanists but Vacheron Constantin chose three particular illustrations: the White Lily, the Queen, and the China Limodoron. 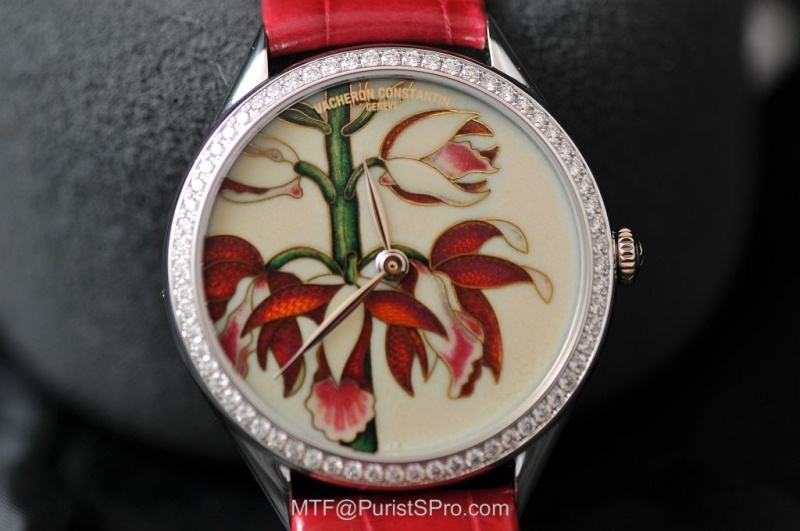 The exquisite dials first go through guillochage, where the texture and motif is carved out and outlined with gold wire. After this, the outlined areas are painted with enamel, the outlines acting as cells (cloisonné enamelling) and the guilloche adds further texture underlying the transparent enamel. The enamel process is performed in multiple colours and each dial is fired numerous times. 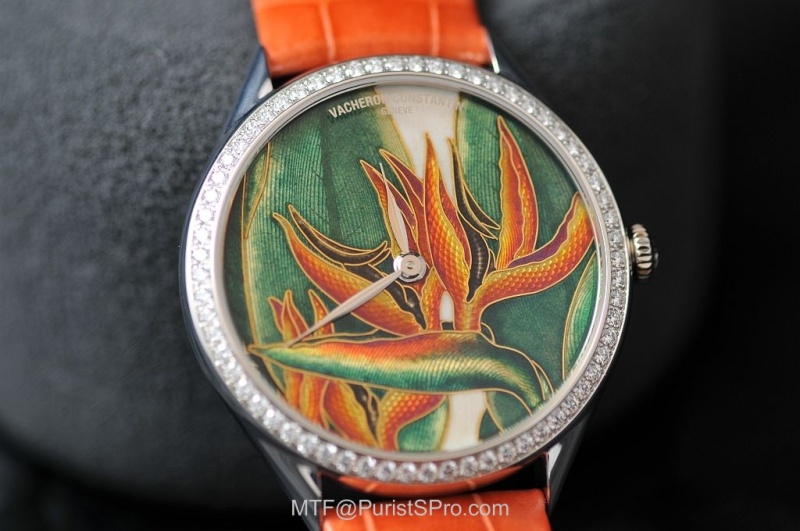 The end result is a trio of limited edition watches featuring these dials that are faithful works of art of illustrations that were already works of art. This exquisite bouquet is only available as part of two limited editions; the trio with round diamond bezels – limited to 20 sets worldwide, and a trio with baguette diamond bezels – limited to only five sets worldwide. 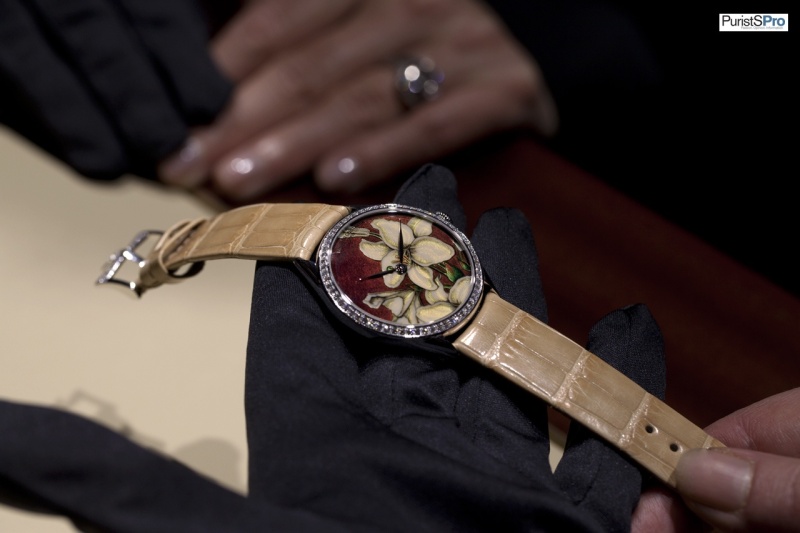 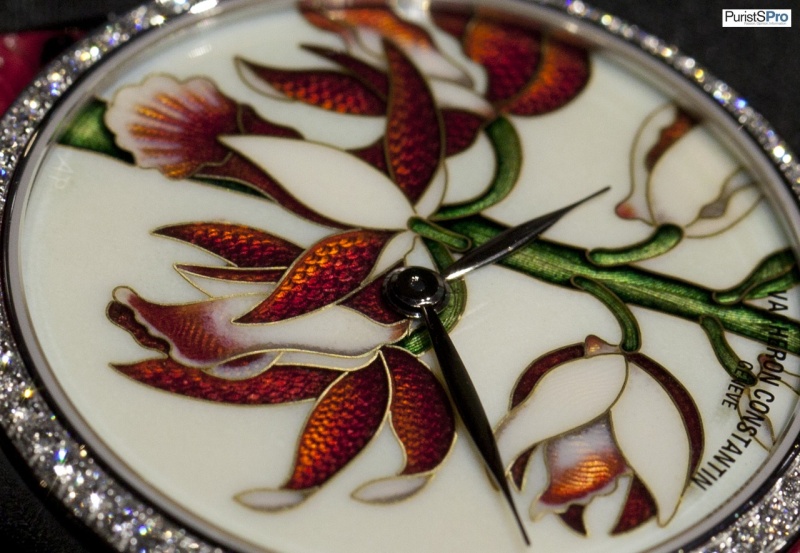 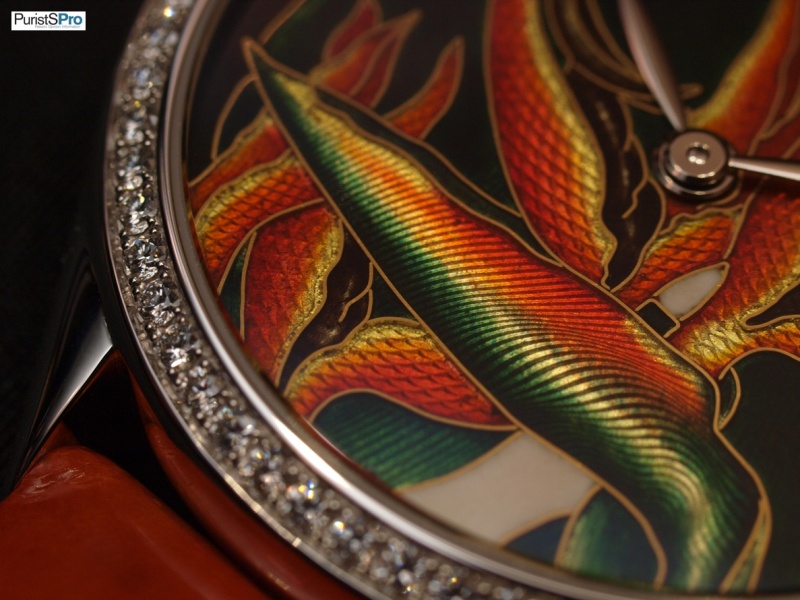 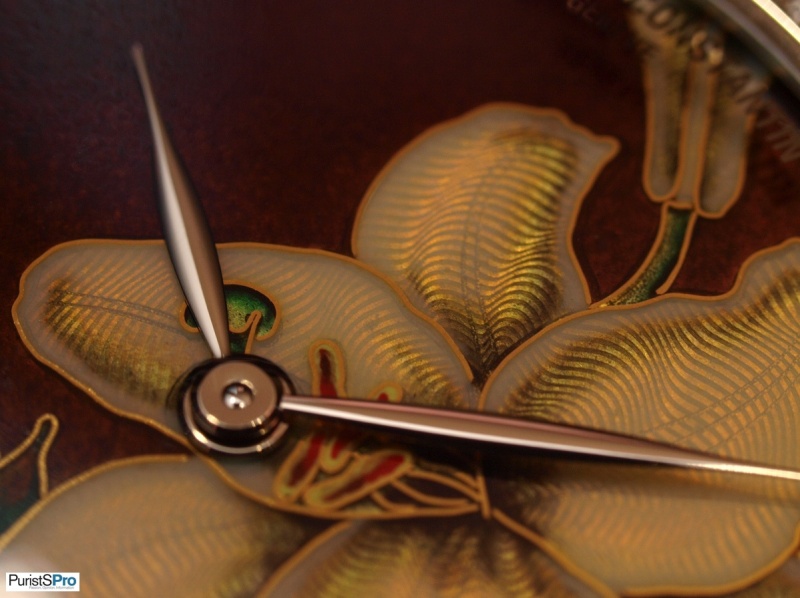 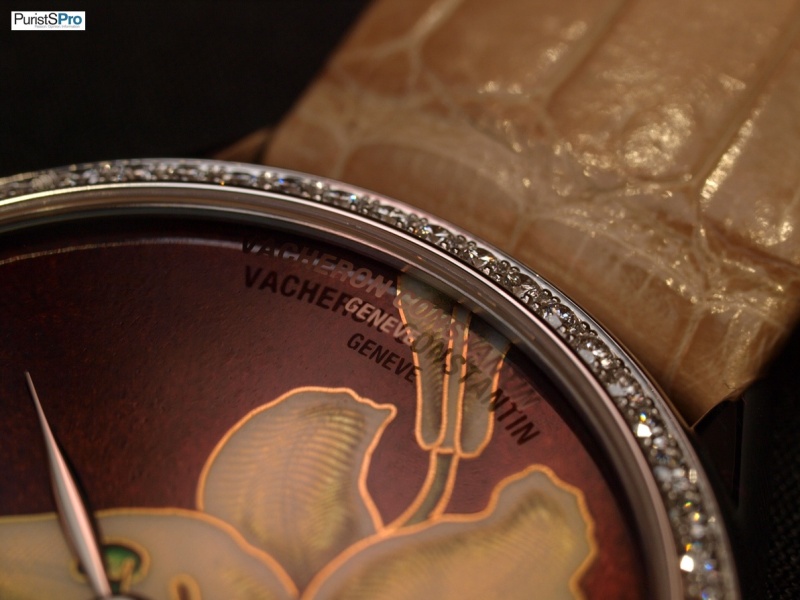 Can you tell the difference between the following two models? 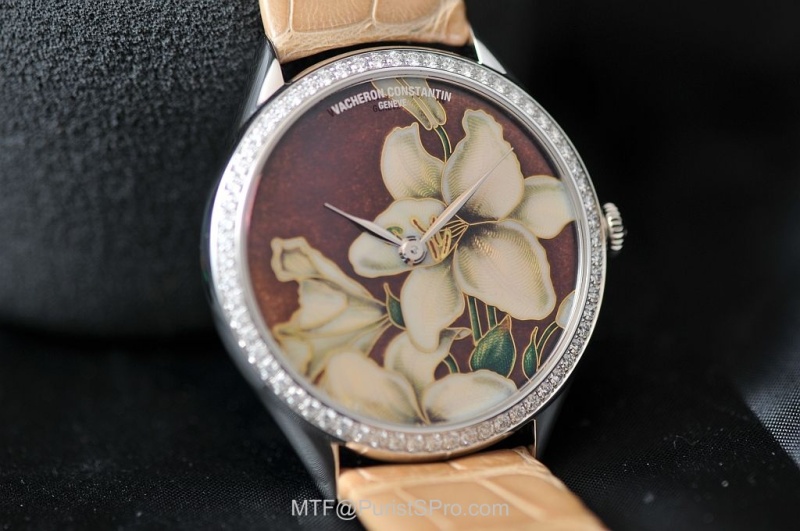 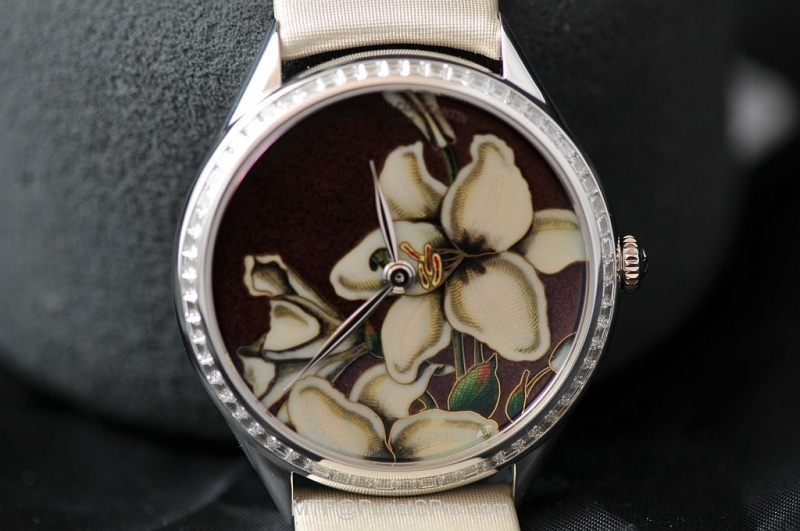 One has round diamonds and the other has baguette diamonds. 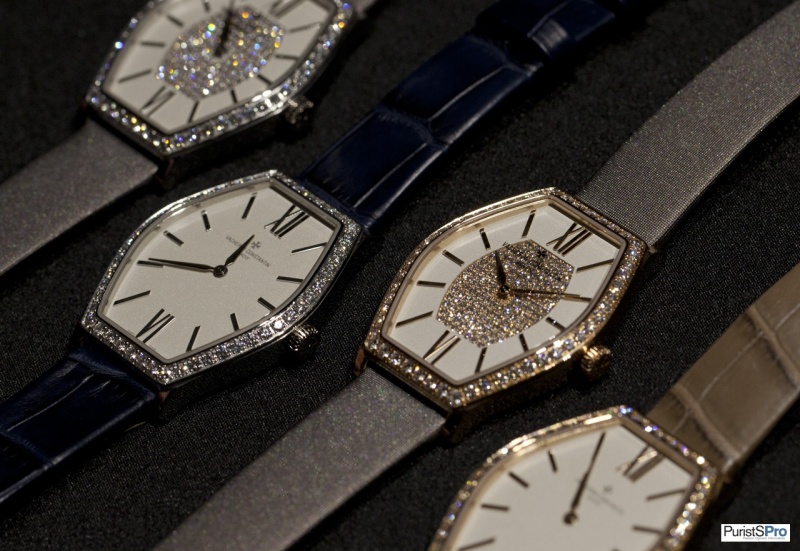 The new Malte Lady comes in a case measuring 28.30 x 38.75 mm, curved to hold delicate wrists. An Alligator leather strap or a satin band make a ladylike connection to the buckle in the shape of a half Maltese cross, which can be plain or set with diamonds.

The cases have diamond-set bezels (50 round-cut diamonds) with the option to have dials of partly paved diamonds. 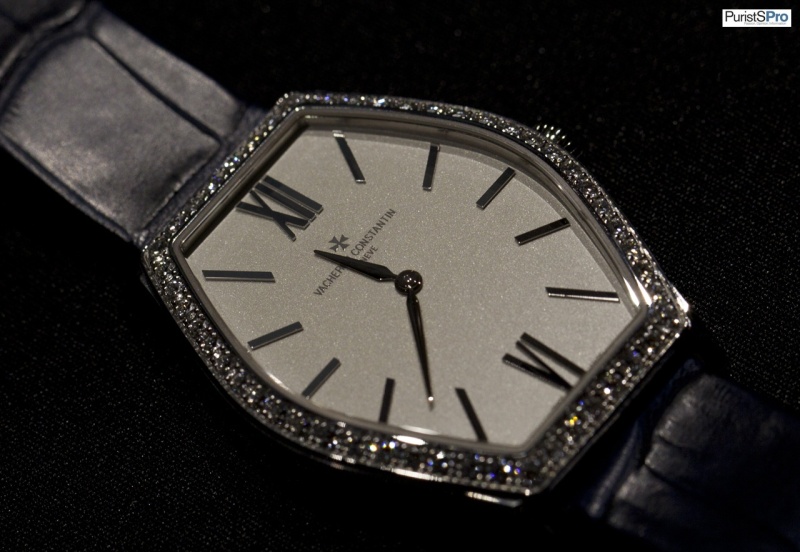 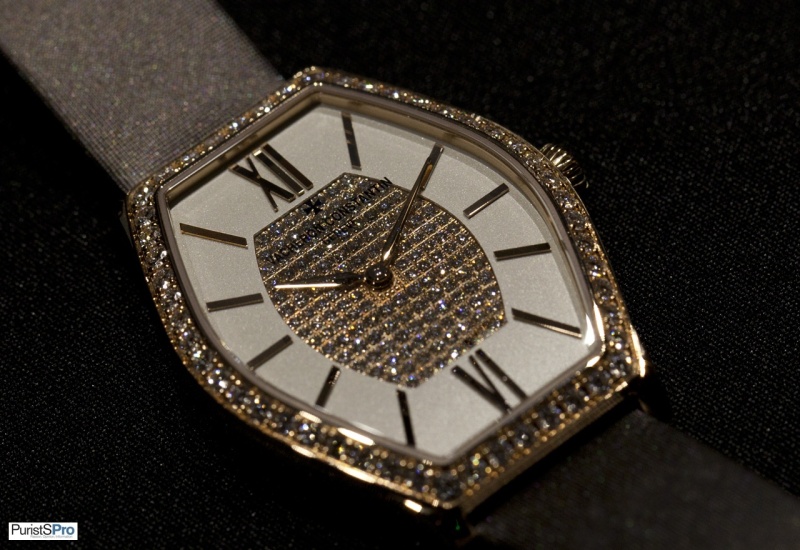 Patrimony Contemporaine watches embrace the present, the Patrimony Traditionnelle models lay claim to a classic style in keeping with watchmaking’s historical legacy. Finally, the Patrimony High Jewellery timepiece is a reminder that the craftsmen of fine watchmaking can unite their talents with the most skilful jewellers. 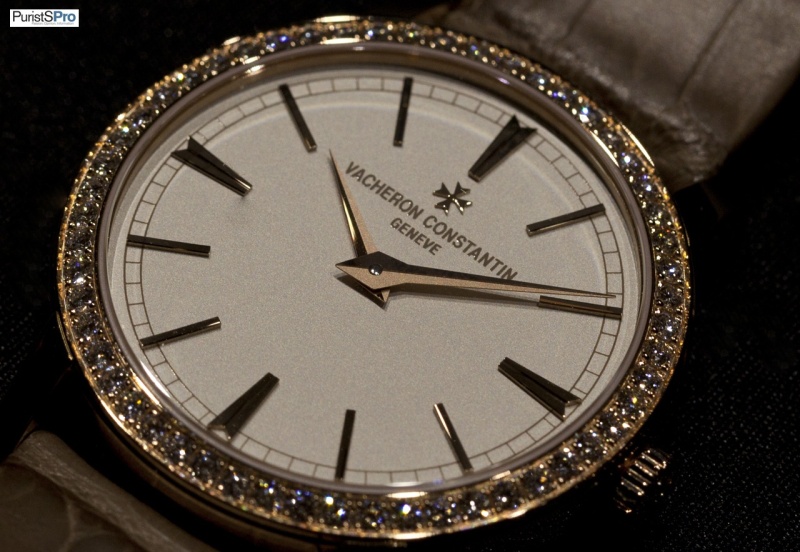 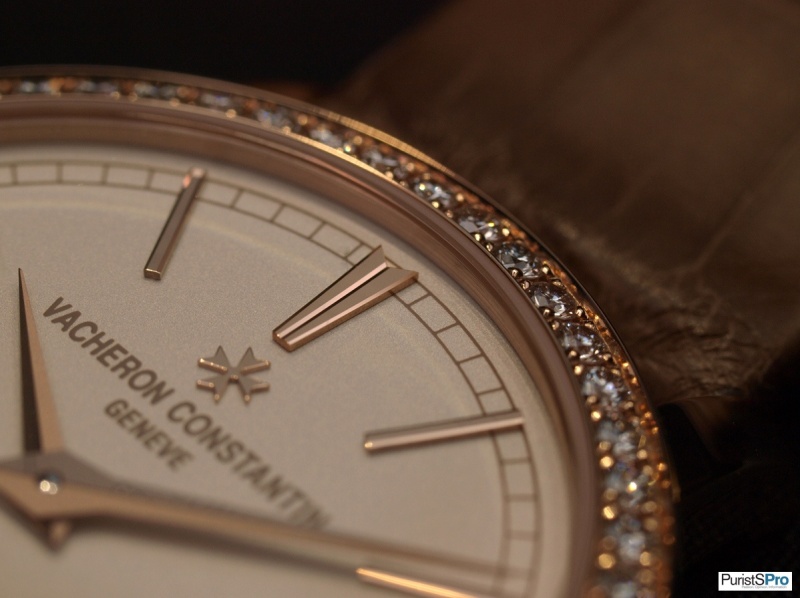 Patrimony Traditionnelle Ladies' manual-winding
In pink or white gold, the slender 33 mm case of the new Patrimony Traditionnelle for women is accentuated with 54 round-cut diamonds set in the bezel. The minute track is painted in brown or grey with applied hour markers and Dauphine hands made from solid gold over an opaline silver-toned dial. 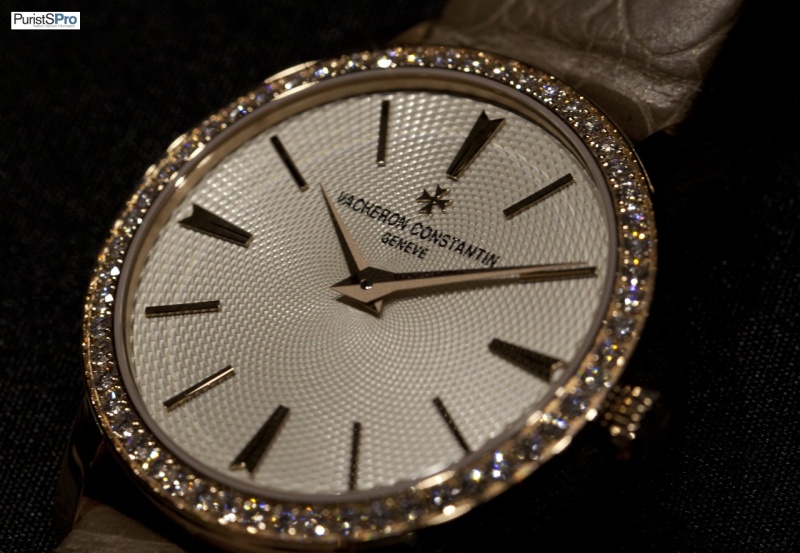 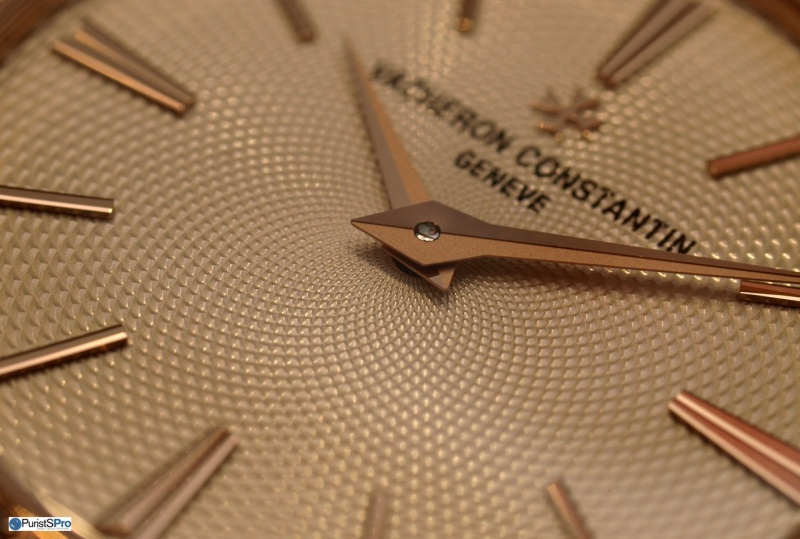 Powered by a mechanical manual-winding movement, Calibre 1400, bearing the prestigious Hallmark of Geneva.

A lady’s watch with a diameter of 36mm. Two versions combine style and technique. In the new design, the clean lines of the case are softened by the warmth of pink gold.

The first version has an opaline silver-toned dial framed by a bezel circled with round diamonds. The diamond-set minutes scale is another feature that ties the watch to the spirit of the times.

The second version, paved with almost 800 diamonds, pays a further tribute to the Maison’s expertise in jewellery. The gems take over the entire surface of the dial and invade the bezel and the outside of the bracelet. 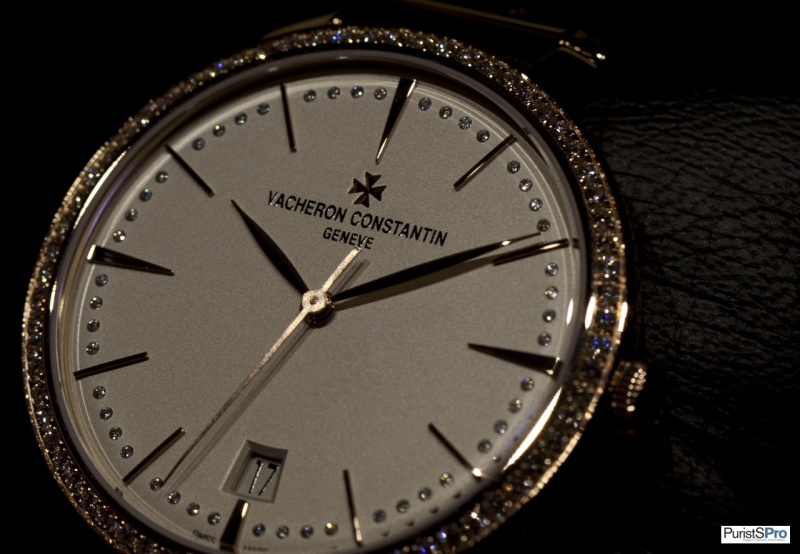 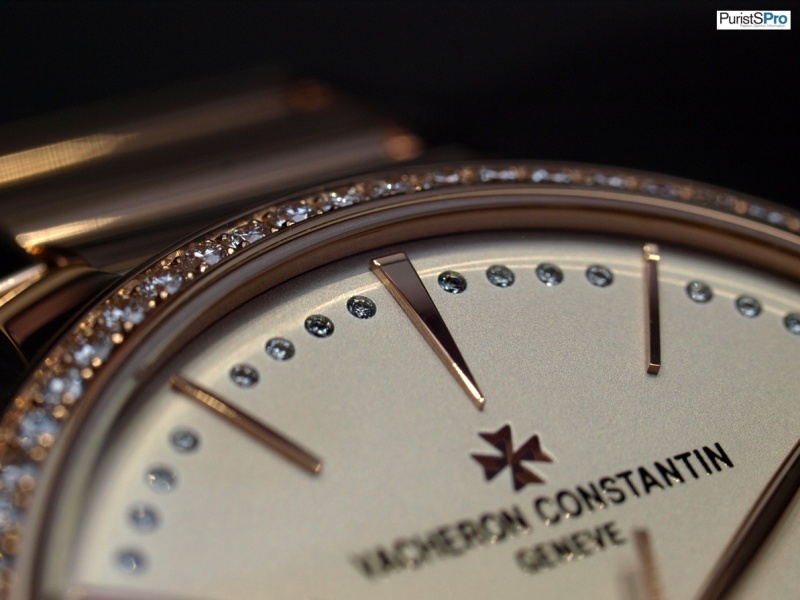 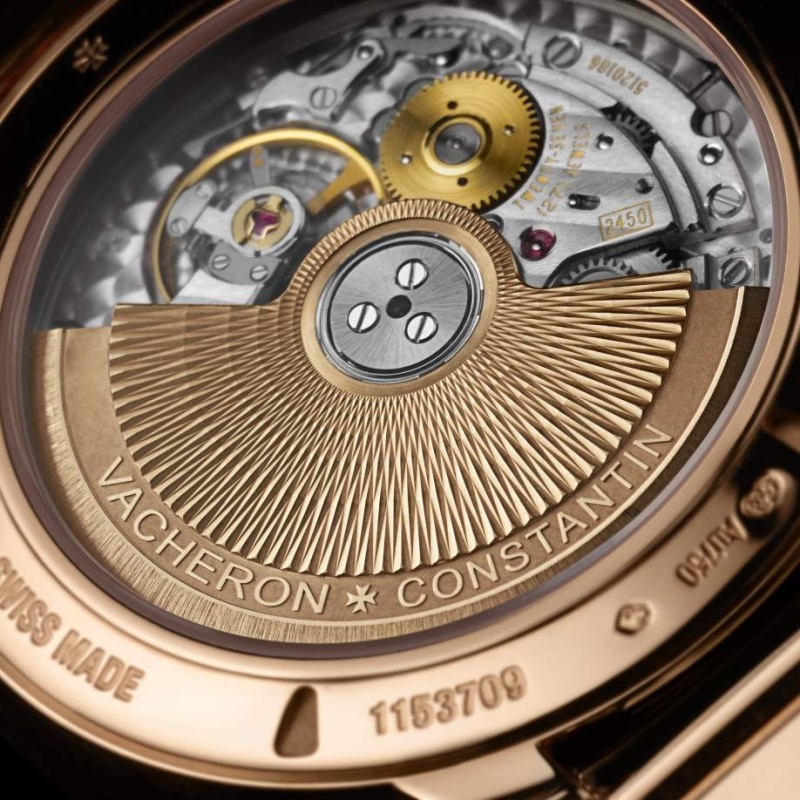 A lady’s watch with a diameter of 36mm. Two versions combine style and technique. In the new design, the clean lines of the case are softened by the warmth of pink gold.
The first version has an opaline silver-toned dial framed by a bezel circled with round diamonds. The diamond-set minutes scale is another feature that ties the watch to the spirit of the times.
The second version, paved with almost 800 diamonds, pays a further tribute to the Maison’s expertise in jewellery. The gems take over the entire surface of the dial and invade the bezel and the outside of the bracelet. 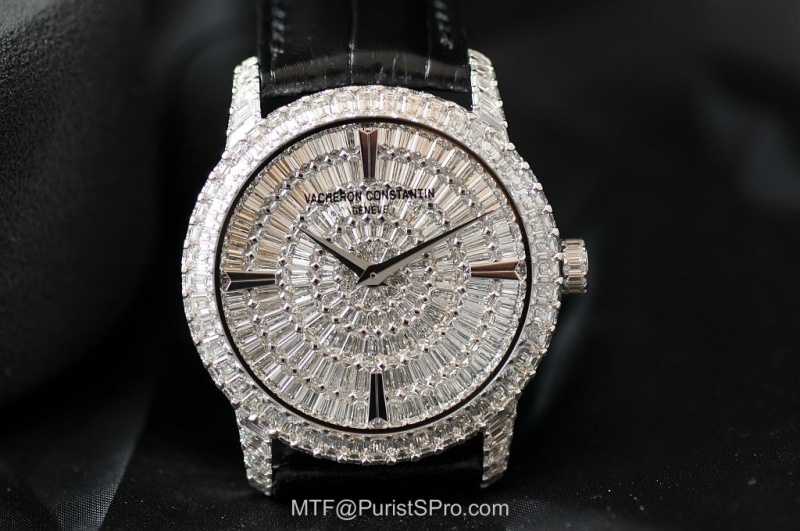 Powered by a mechanical manual-winding movement, Calibre 1400, bearing the prestigious Hallmark of Geneva. 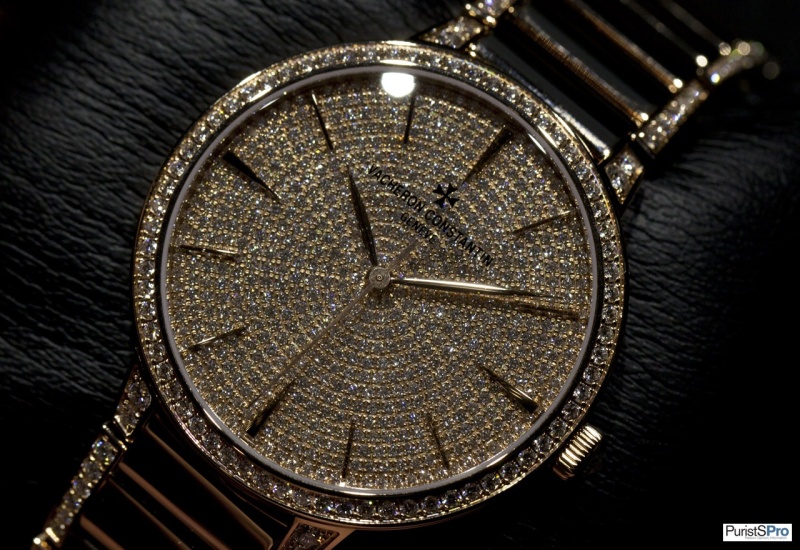 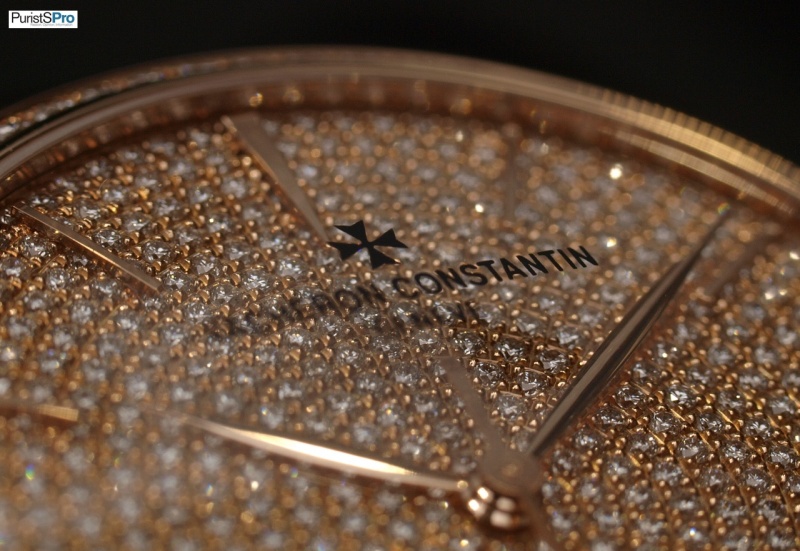 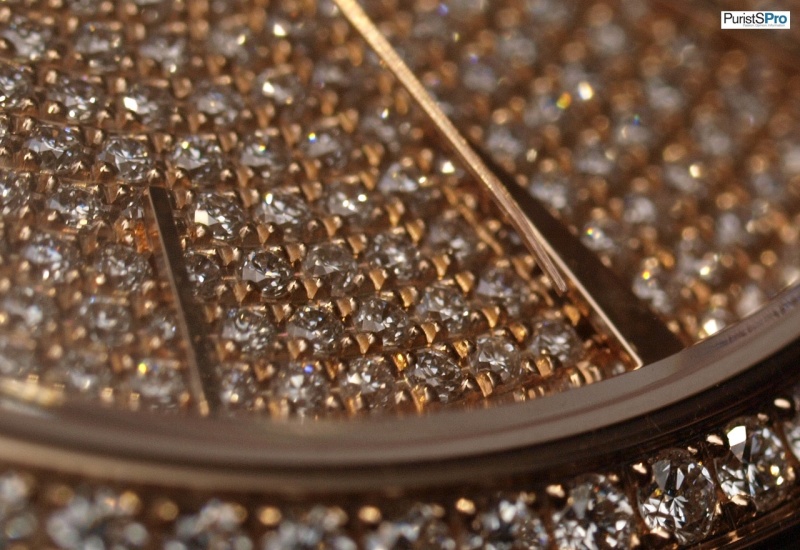 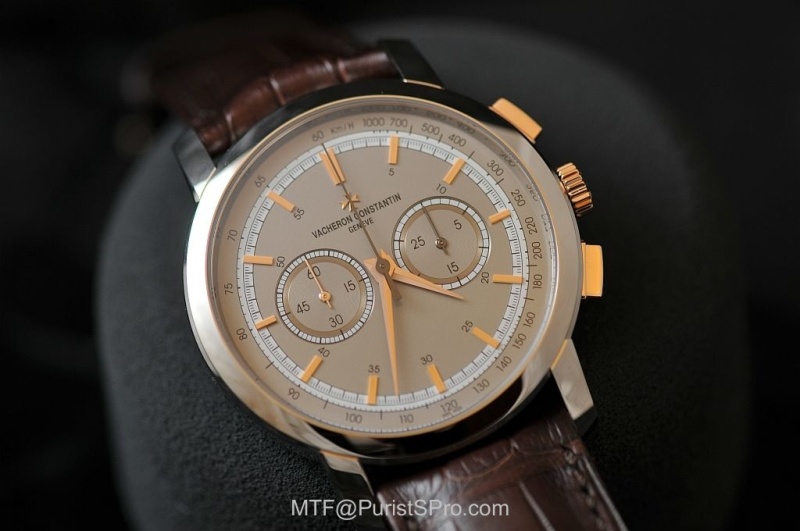 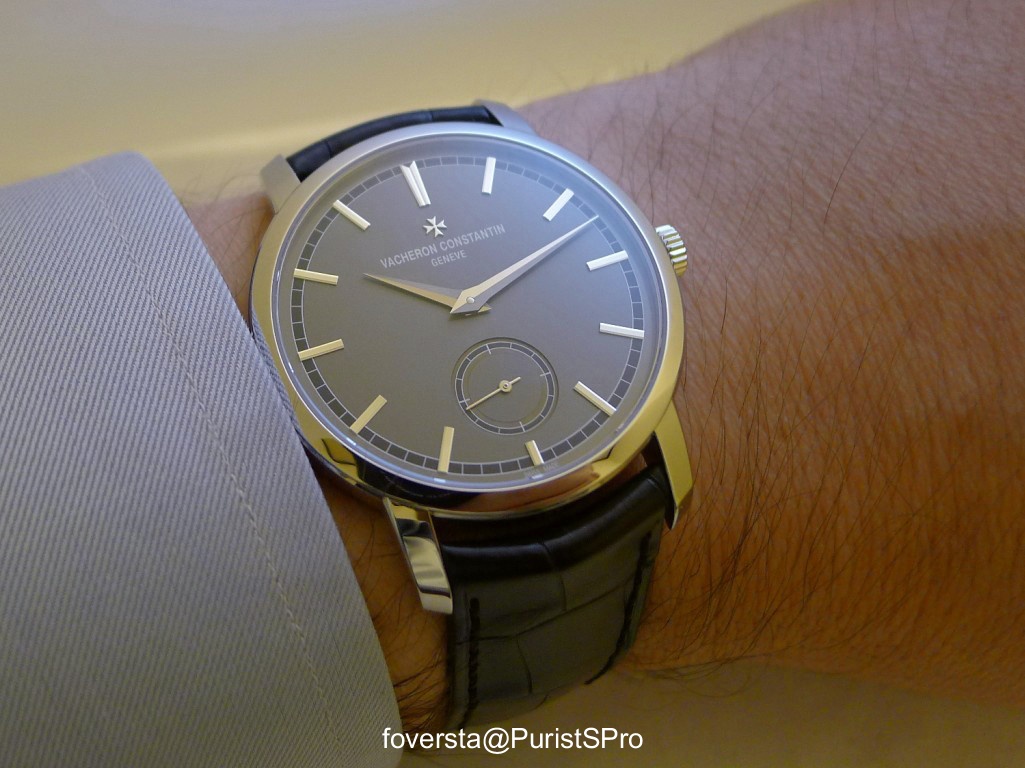 For men, the 2013 standout is the Patrimony Traditionelle in platinum with grey dial. This is the first platinum variant offered in the simple 3-hand watch design with the 4400 caliber, the calibre with the longest power reserve in this watch category.