First time I see such a dial patina on a Royal Oak.

Brownish, copper, maybe burgundy sometimes with sub dial rims which are verging on the orange. This dial patina is just incredible and so desirable 😍

What do you think of it? 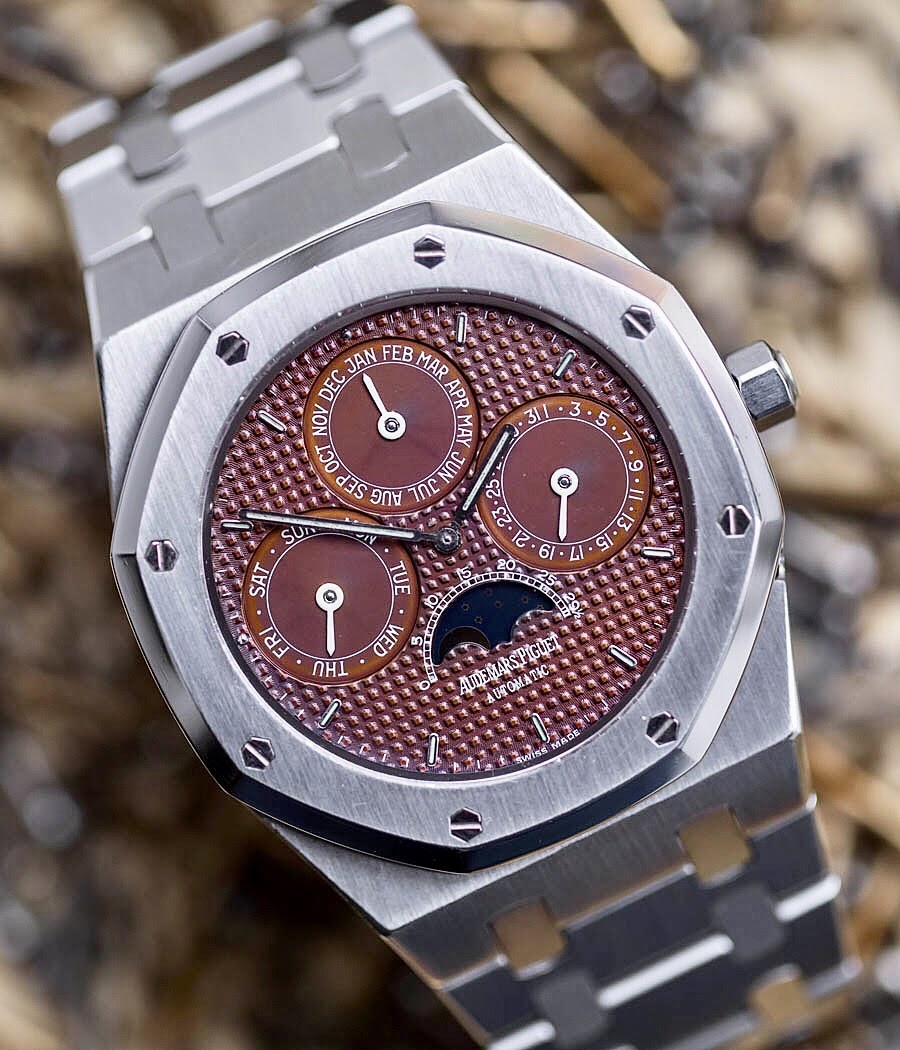 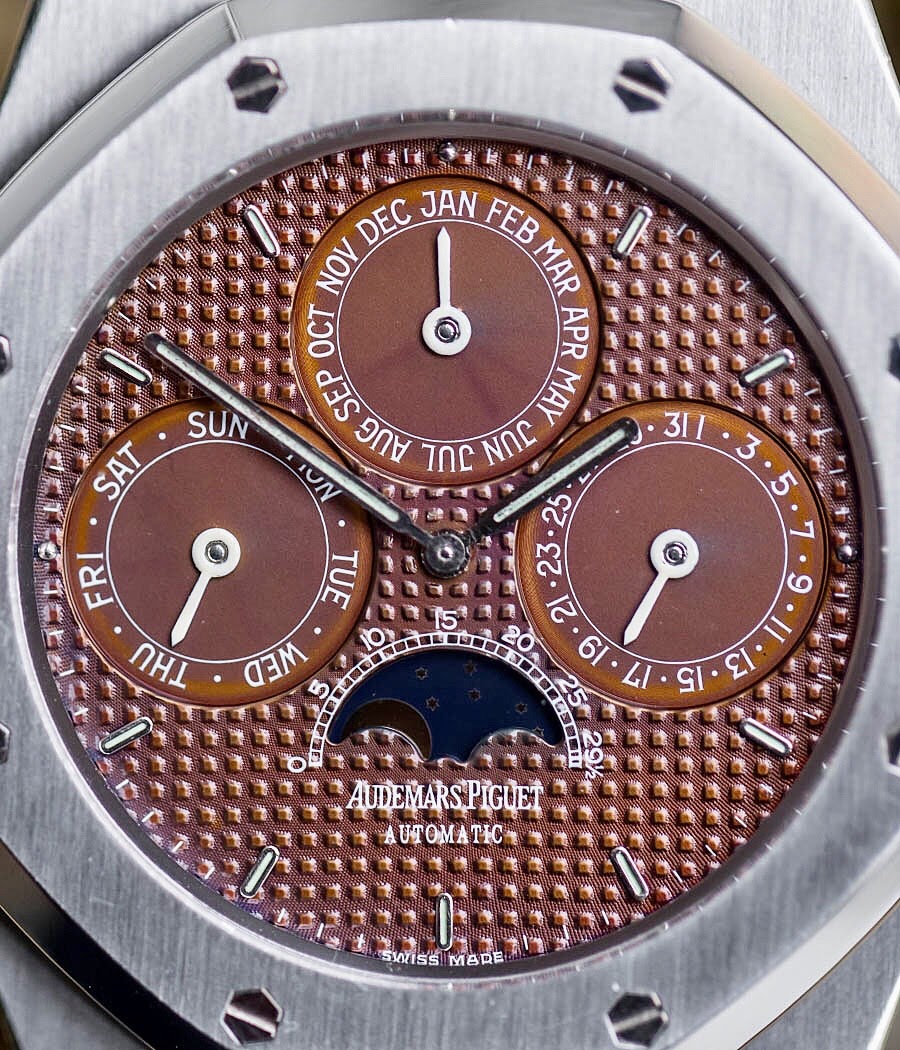 By: Alkiro1 : January 23rd, 2018-06:46
First time I see such a dial patina on a Royal Oak. Brownish, copper, maybe burgundy sometimes with sub dial rims which are verging on the orange. This dial patina is just incredible and so desirable 😍 What do you think of it? Credit: Meertz World of Time...
login to reply

That is truly stunning

By: g_schroder : January 23rd, 2018-07:05
I haven't seen that color before, very interesting. The patina is also really different, it's almost like the sub-dials just have discoloring around their edges, which seems odd to me. In any event, a very cool watch and really something you don't see eve...
login to reply

My pleasure. This patina is absolutely stunning and, more importantly, homogeneous

What was the original color? [nt]

With this reference and in steel, the original colour should be white, blue or black

So the black (or blue) changed into red??

By: Arie - Mr Orange : January 23rd, 2018-08:10
mmm could it be counterfeiting? I have often wondered what would happen if you would place a Rolex (or in this case an AP dial) under a UV light for weeks or months....? Artificial patina?
login to reply

I know it's possible to modify the original dial colour of a watch to give it an artificial patina. More than UV or different lights, you have to use a combination of solvents to reach such a colour

WoW that is beautiful! nt

I don't know about this one; it does not fit with RO QP history

By: Joepny : January 23rd, 2018-07:49
So I saw this pic on the Meertz IG account yesterday. It was surprising. I did some amateur research on the RO QP last year when I was purchasing mine so I remember many variations. Not this one from Meertz. This dial is very different and some of its odd...
login to reply

You perfectly enhanced the sub dials inconsistencies compared to the other RP PC. I would be curious to know the whole story about this dial as we know that’s not a limited edition

Interesting insight Joe. Without proper explanation of these inconsistencies, I would be quite hesitant (notwithstanding the very cool patina present) [nt]

There’s another potential explanation even if it’s mostly improbable

By: Alkiro1 : January 23rd, 2018-09:45
One of my friend, who own a lot of AP, went to the manufacture for a visit few years ago and he saw a RO with a very unusual dial colour on the wrist of one of the employees. He asked what this dial colour was and the employee replied him that it was a pr...
login to reply

Great that you brought it ro light.

By: kolosstt : January 23rd, 2018-09:38
Detailed and would pay special attention to understand first how to explain such difference. Cheers Kolosstt
login to reply

By: VMM : January 23rd, 2018-07:52
Those look like signs of humidity on the dial and hands, I hope the movement has not been affected. Watch looks great anyway. Vte
login to reply

Okay, now even more questions about the provenance

By: Joepny : January 23rd, 2018-08:03
screen grab from the Meertz website of the watch Reference 25654 was the 3rd generation of the Royal Oak Perpetual Calendar. It was estimated that 800 total were produced in various metals. The year 1990 would be acceptable because this generation had a l...
login to reply

By: Joepny : April 24th, 2018-06:20
I thought all the Royal Oak watches up to about the mid-90s were 2 part construction case. I think Velociphile made a post about it last year.... Anyhow, good to know that production number is more accurately over 1000. It means it was a good success and ...
login to reply

By: Joepny : January 23rd, 2018-09:47
That is very different from any other dial style in the RO QP history that I’ve seen. Typically “Audemars Piguet Automatic” is printed over a smooth surface different from the dial pattern in terms of color and/or texture. The watch is already on hold per...
login to reply

Good additional point. It seems that the length of applied indexes are slightly shorter than they should be too

By: Alkiro1 : January 23rd, 2018-10:14
I would be curious to see the original (extract from the archives?) papers of this one. Best wishes Alkiro
login to reply

By: Joepny : January 23rd, 2018-10:32
Meertz said it is the original dial and hands. I doubt the Certificate of Guarantee would do it. But who knows? AP made thousands of the RO QP.
login to reply

Could it be a special order? Maybe as I don’t know if it was possible to order a unique dial back to the 90s 🤔

Sure, possible special order, but dial quality is too low with those issues that I pointed out

By: Joepny : January 23rd, 2018-11:06
So, if I were the VIP client and AP sent that dial to me (imagine it was blue or black tapisserie before the rust set in), I wouldn't be happy and wouldn't keep it. I would send it back to AP. I am surprised Meertz did not mention anything on their IG or ...
login to reply

They want to sell mainly in my opinion 😉

Indeed! But the main problem here is to know where does this dial come from? 🤔

Sorry i am no AP expert . I think some comments make sense .

By: Watchonthewrist : January 23rd, 2018-13:23
If you see the space between the sub dails 🤔. Would love to know the outcome of this puzzel 😉
login to reply

No need to apologise my friend. I didn’t pay attention to these details too when I saw this dial. I was totally mesmerised by its colour 😁

Easy to understand why 😉

By: VinnieD : January 23rd, 2018-14:08
but I would stay away from that one An acquaintance had a nice blue dial Reverso date (quartz) It recently turned completely golden brown... guess what? That acquaintance had had a little water accident with the watch but she likes it as it is I have the ...
login to reply

Interesting. I suppose this water was salted?

By: VinnieD : January 23rd, 2018-14:21
No just plain tap water (but it was at the seaside...) Examples from two tone Rolex GMTs with blue dial turned purple/brown abound I believe
login to reply

I’m really surprised. How many times it took to turn from blue to purple/brown?

By: VinnieD : January 23rd, 2018-14:27
I do not know how long it took but the result is actually quite interesting - I will try to post a picture at some point BTW - I meant the yellow gold rolex blue dials that sometimes turn to purple or brown (two tones are brown to start with ;-)
login to reply

I bet this was a custom order.

By: JerryW : January 23rd, 2018-19:08
They have been writing Audemars Piguet on the tapestry for many years. I have seen some photos where the letters look a bit strange. Although I do see a hint of blue on the dial edge between the 6-9.
login to reply

I have an aging Offshore dial I hope to use one day...