The Tudor Submariner was used by the French Navy - especially by the Groupe de Plongeurs Démineurs founded in 1955 - from the late 1950's to the quartz age.

The most famous Submariner version delivered to the French Navy is the reference 94010, with blue dials and snowflake hands. It was first delivered in 1974 with serial numbers in the low 800,000’s.

Here’s an article I wrote some years ago about the history of the Tudor “Marine Nationale”:

Recently, I was lucky enough to be able to examine an example that was purchased directly “from the source” with a full documentation. As you will see on the following pictures, the watch comes with some documents and stuff I had personally never seen before. 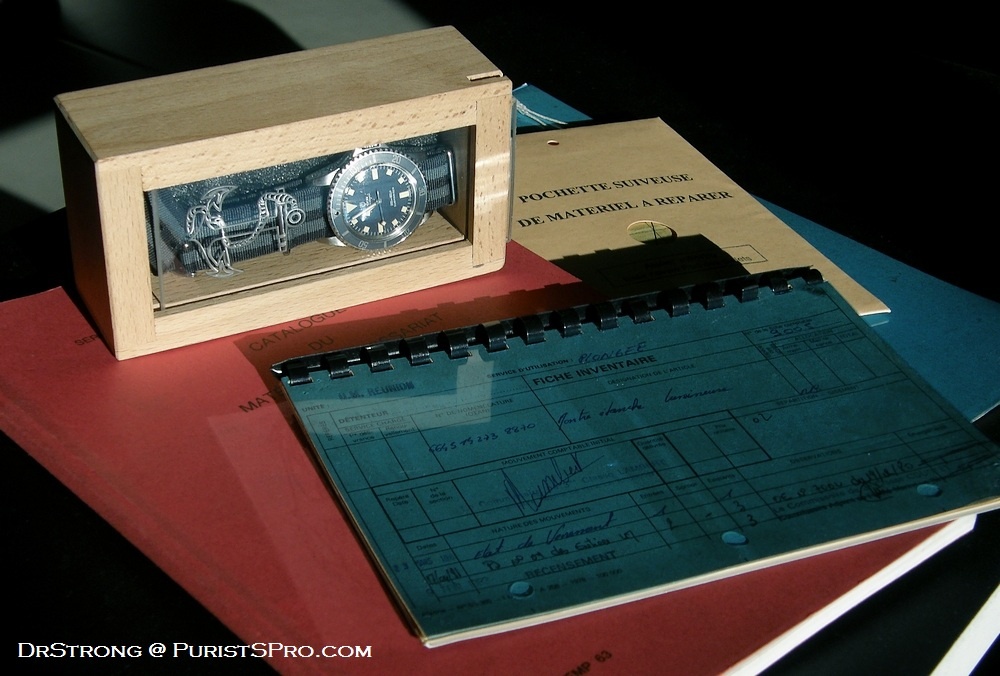 The timepiece ended its career on the Vetiver, a ship posted at the military harbour of Port des Galets; it is located on La Reunion, a French island of the Indian Ocean . The 15 meter ship was built in 1987 and used by the Brigade de Gendarmerie Maritime de la Réunion for surveillance and rescue missions. 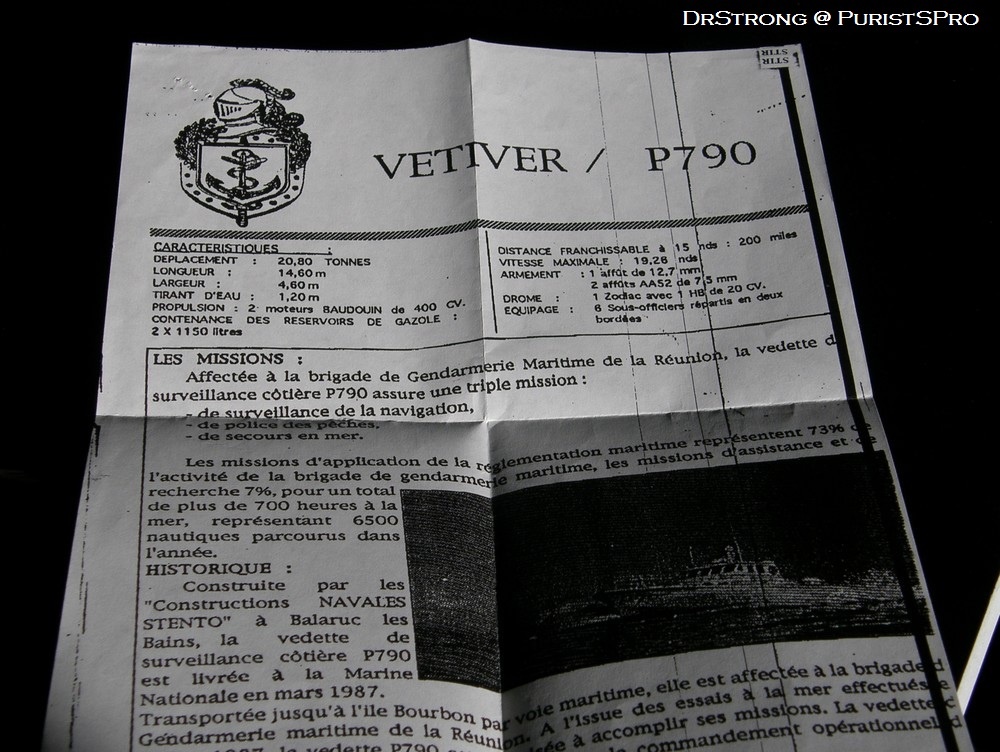 First, here are a couple of books that came with the watch; they describe some of the diving material used by the French Navy divers: mask, re-breather, knife, glove, wetsuit, etc…every item is fully described and its use is explained. These documents are fascinating from an historical point of view and they really put the watch in perspective. 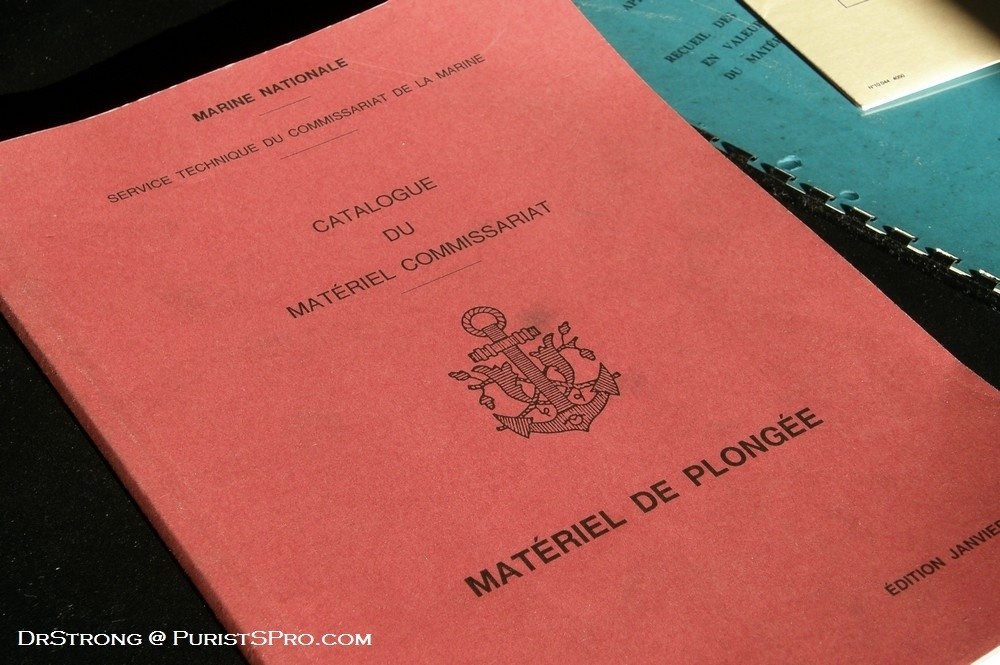 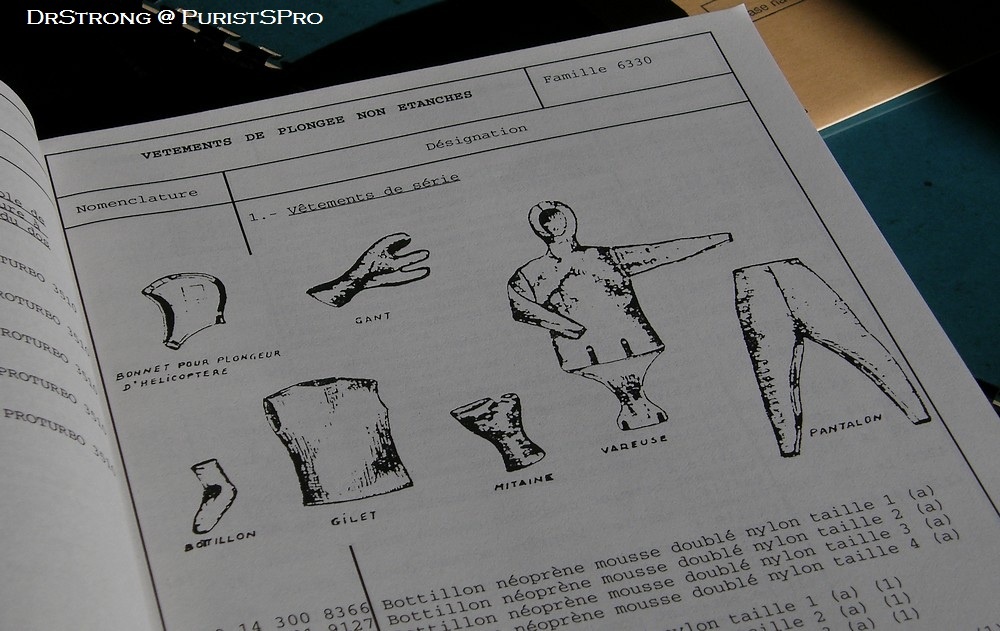 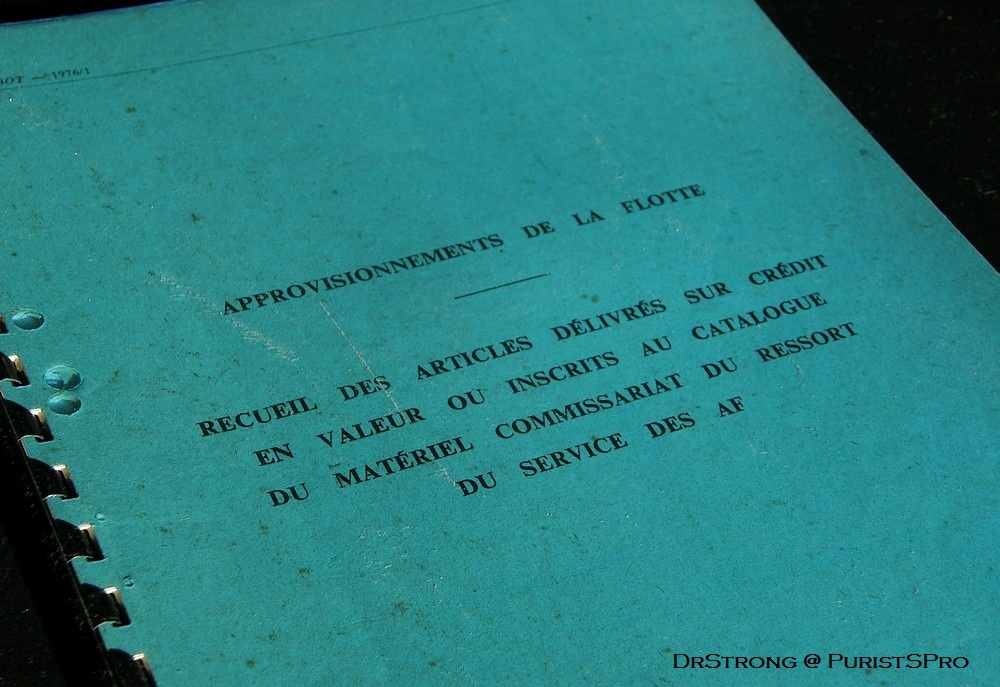 This little notebook was attached to the watch: “Montre Etanche Lumineuse” meaning “Luminous Waterproof watch”. It describes all the events of the watch’s life until its decommissioning – “Reforme”. It is interesting to note that the watch was assigned to several different ships from the mid 1970’s to the late 1990’s, the last change occurred in 1995. 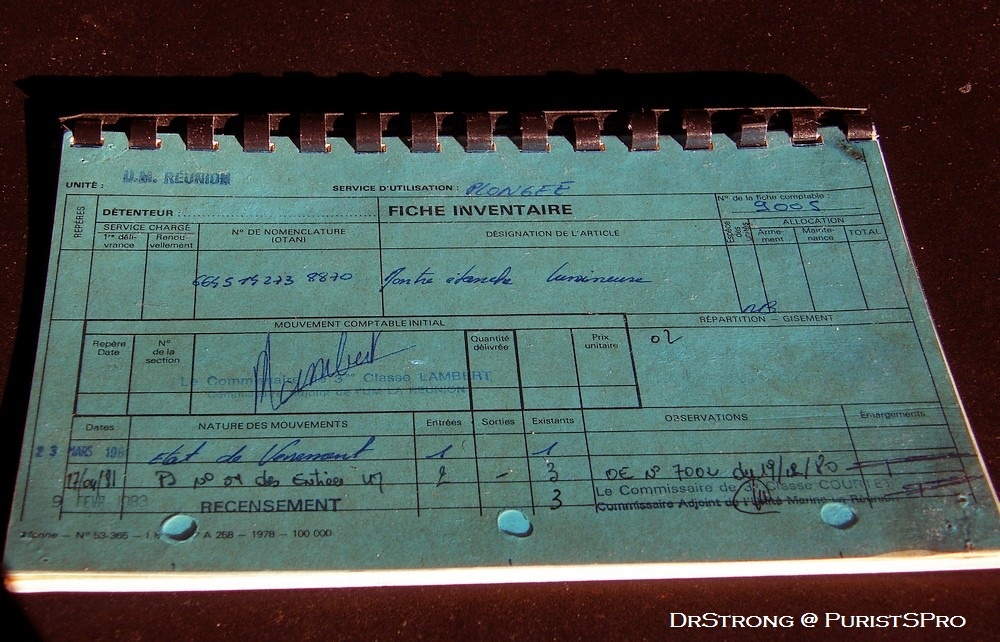 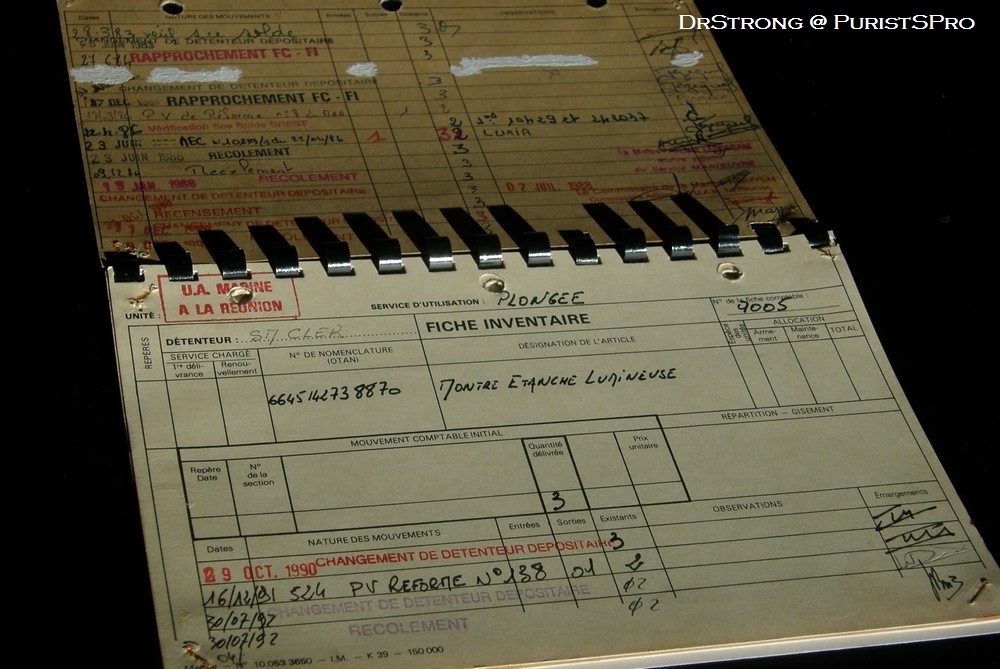 This envelope followed the watch whenever it had to go for service; in the past it probably contained the service receipts, now it hosts the decommissioning papers, stamped in November 2003. 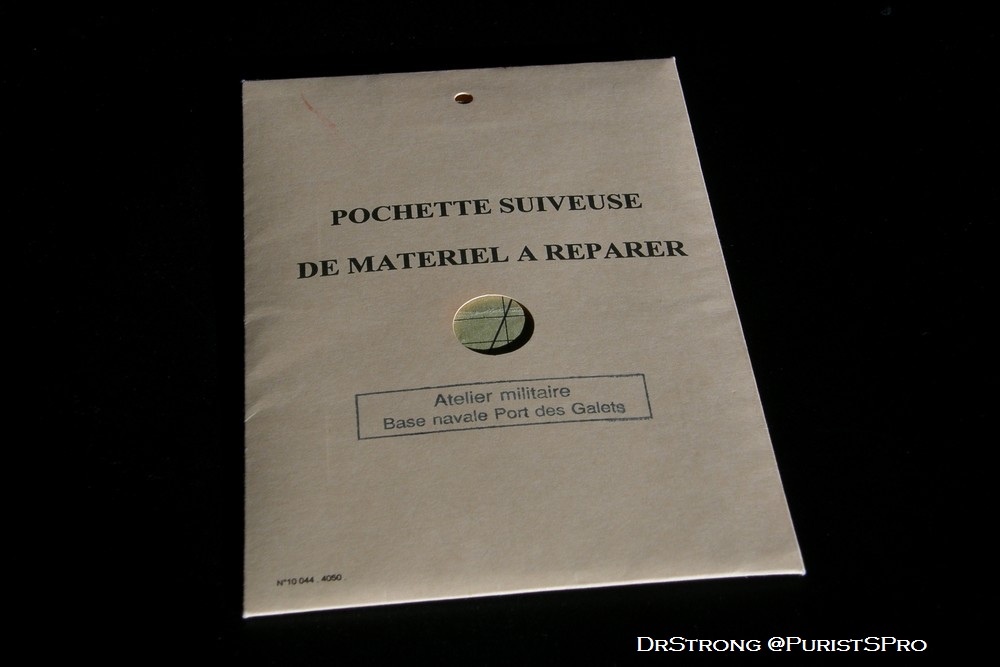 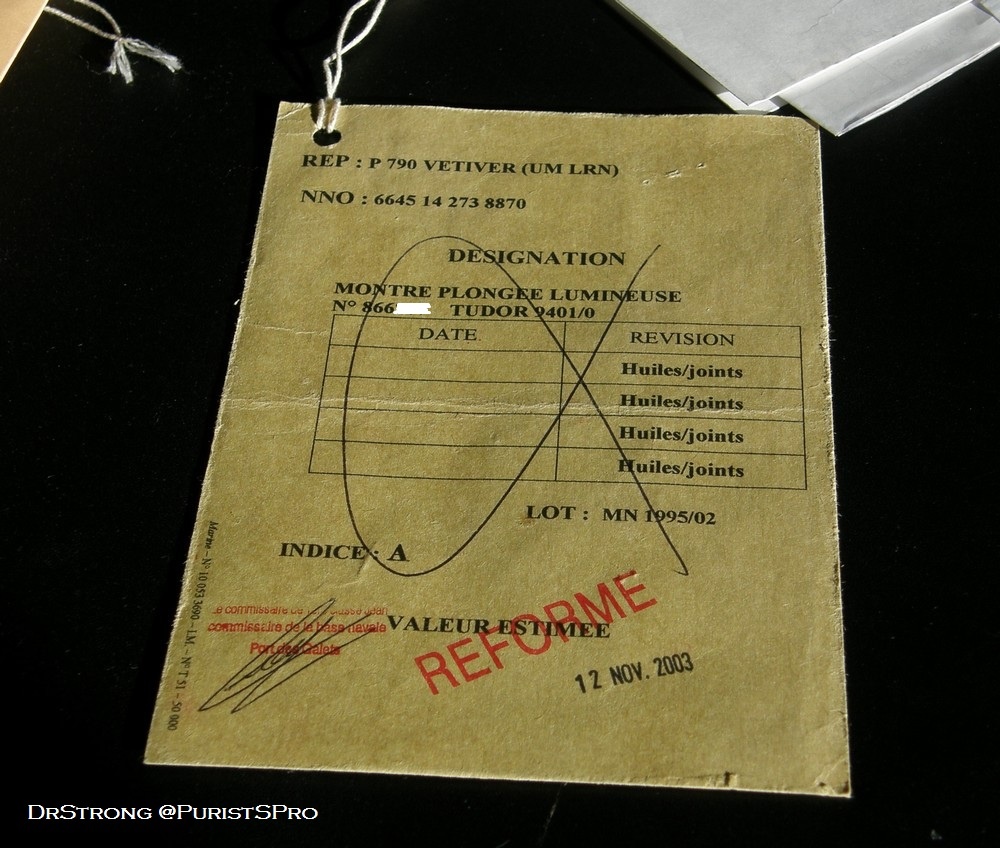 The watch itself is in great condition: the dial and hands are perfect, with a very nice creamy color of the tritium. The bezel has faded to a very nice blue, probably because of the exposure to sun and salted water. 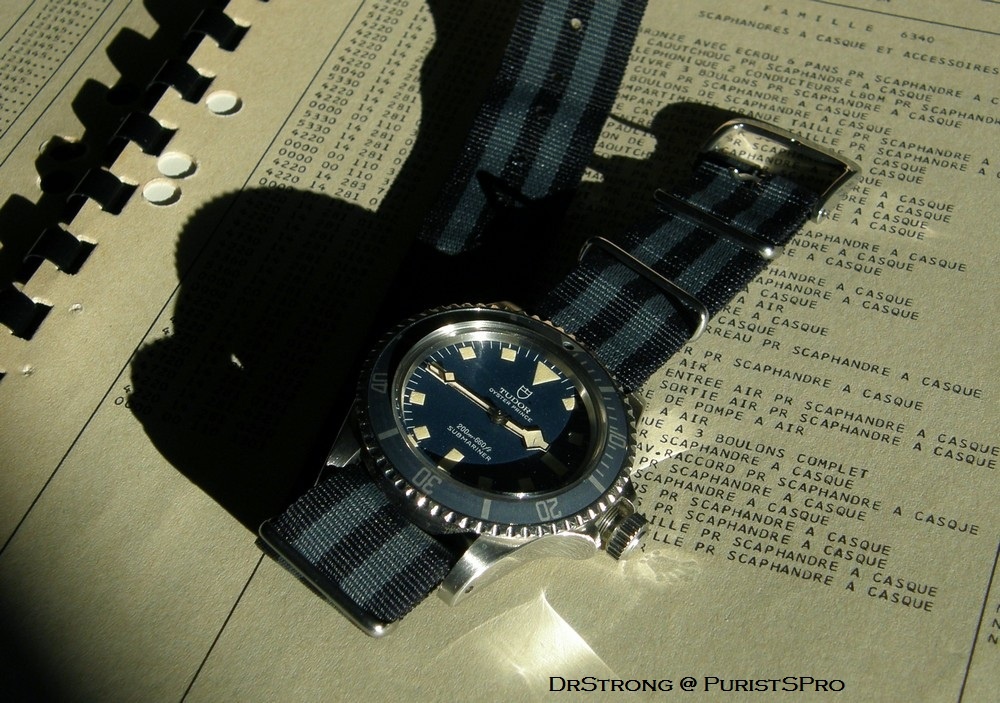 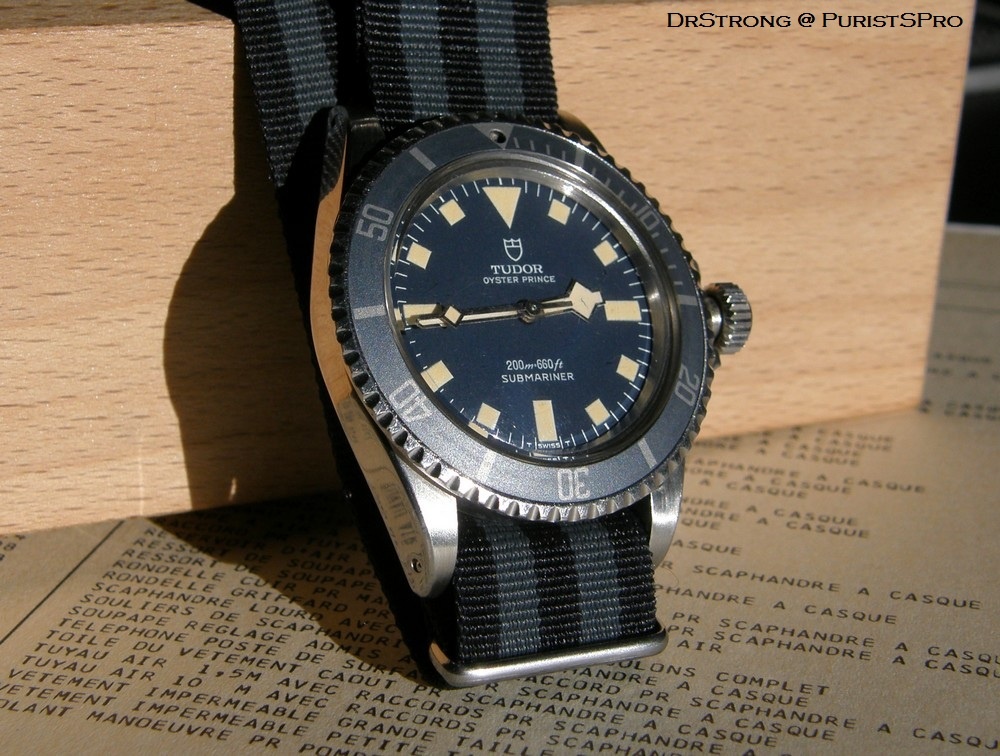 The watch comes in a little wooden box with a plastic top that bears an anchor logo: ultra cool !! I have never seen this before and it was really a surprise for me to discover the original packaging of this kinf of watch. 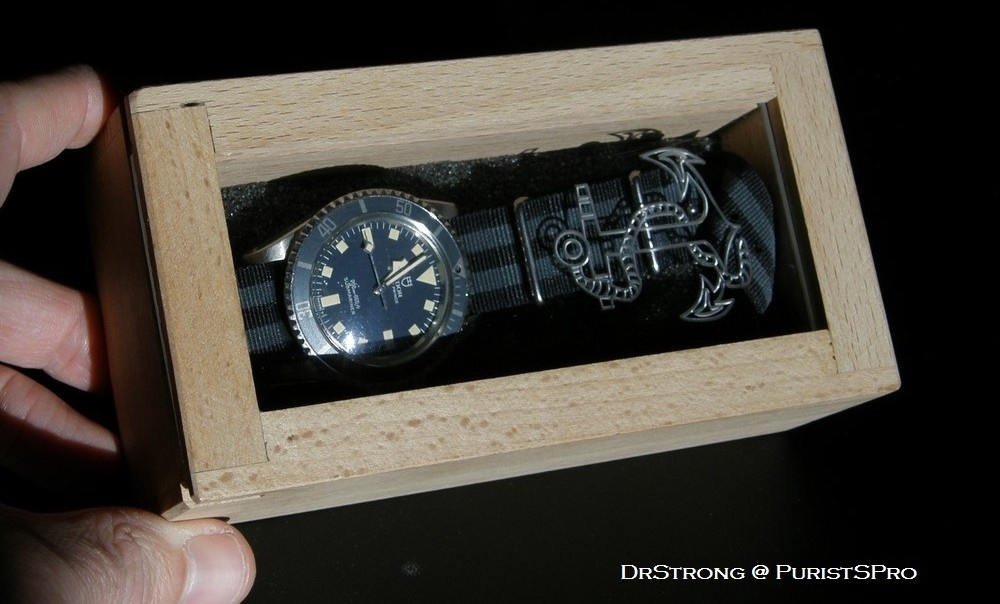 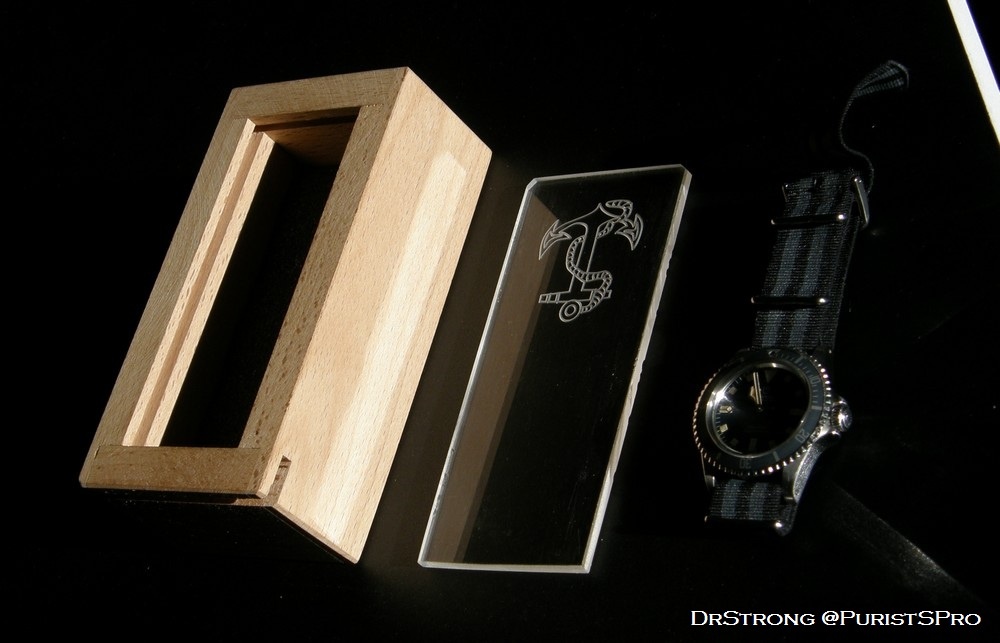 The  caseback engraving is in great condition, still very sharp. It's really a part of the Tudor MN DNA ! 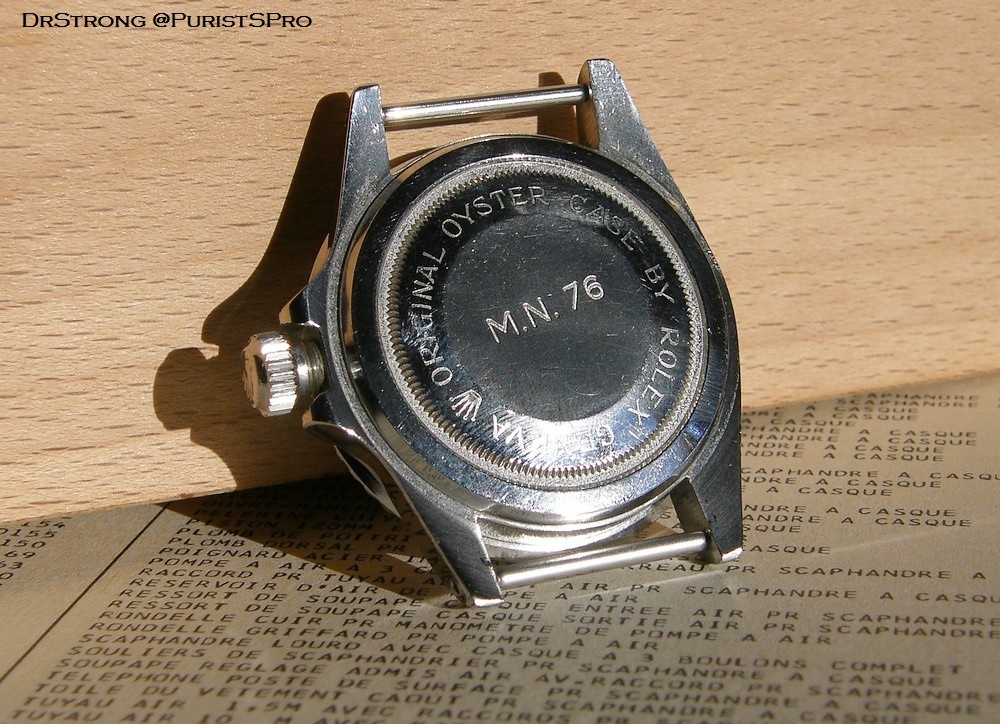 In conclusion, I was really ecstatic to study this watch and present it to you, as it is definitely the most complete example I have ever examined.

By: DrStrong : December 13th, 2012-05:27
The Tudor Submariner was used by the French Navy - especially by the Groupe de Plongeurs Démineurs founded in 1955 - from the late 1950's to the quartz age. Most probably, this watch was chosen of course because of its quality, but also because of its cos...
login to reply

By: amanico : December 13th, 2012-05:43
You didn't tell us how the story ended? You took it back home? Never saw such a complete set, either. Impressive. Thanks for the great post! Nicolas
login to reply

The watch is still on my friend's wrist...

By: jporos : December 13th, 2012-07:18
I have been on the missions with the watch. A wonderful historical find, Dr. Strong. And a beautiful watch as well.
login to reply

I have the same feeling too [nt]

By: marcello pisani : December 13th, 2012-07:43
Tudors are certainly not my favourite cup of tea ....... but this is simply incredible .. really never seen a milwatch with such a " corredo " and a fully documented story behind.... hope you bought it .. I would like to see it during one of the next meet...
login to reply

Documentation from the source...

It makes the watch really special, I agree [nt]

By: Guillaume Seventies : December 13th, 2012-09:18
Much material for a watch of the French Navy is really impressive. Our friend M was really lucky, and not only for that piece!!! We should be able to keep track of him :-) Guillaume
login to reply

Extremely exciting and interesting, thanks! [nt]

Thanks for the kind words [nt]

WOW what a post, thanks for sharing it my friend. [nt]

That is SOME discovery....

By: Baron - Mr Red : December 13th, 2012-12:09
lots of charm with these "blues" and fantastic to find such a lot of history and provenance. Nice one Jeff
login to reply

By: Subexplorer : December 14th, 2012-04:54
... and with all that complement stuff, and including the fantastic wooden case it came with, it makes for a one of a kind timepiece! What a nice addition to your collection!! Thanks for sharing wiht us this great presentation here! Best cordial regards, ...
login to reply

Not part of my collection Abel...

Thank you for your answer Dr Strong. Yes even if it is not ...

By: Subexplorer : December 14th, 2012-13:05
... yours, it is an awesome watch, and if it belongs to a good friend, you can still enjoy it in his happiness of owning it. Thanks for sharing and receive my best cordial regards, Abel.
login to reply

By: Mike H : December 16th, 2012-09:01
This is more than the Holy Grail, this is certainly a unique set. A wonderful post to read in detail. Nobody on earth will ever be able to call his MN "full set" after this one! Thank you for sharing Jeff. Best, Mike
login to reply

Hopefully there are more goodies to come...

By: G99 : December 16th, 2012-11:17
its funny what some military pieces come with. i've had 2 or 3 marine chronometers with their military issue papers showing which boats they've been on and my Heuer flyback had the maintenance book with it in German, but this is a hugely comprehensive pil...
login to reply

An absolutely stunning post!! the watch is nioce, but the accompanying info is Fantastic!! [nt]