I have a confession to make - I am a serial hoarder. I like collecting things, be it teddy bears, good books, good watches, fountain pens etc. Among my favourite hobbies is collecting orchids. I still maintain 2 large collections in 2 countries, but lately due to COVID, I could not travel to visit my beloved flowers.

Why? Because orchids regenerate - they can be divided and shared. They make good gifts to friends and loved ones.
I'm quite a snob, I do not collect common orchids such as the hybrids one finds at Supermarkets and garden centres. I want the most exotic, the rarest species there is. If it's on the CITES Appendix, I would seek it out.  There was always the thrill of the chase - the glory of owning a rarity like owning a limited edition FPJ piece, or a piece from Only Watch.
In the orchid world. the equivalent of an FPJ would be an orchid known as Phragmipedium kovachii or Paphiopedilum anitum, or perhaps, even a Mexipedium selenipedium - I used to have access to these plants, and the strange thing about rare things - money will not buy them, one needs serious connections and maybe a little money too. Sometimes, the collectors may like me so much, they give me something from their hearts - I once received a shoebox of a newly discovered orchid (Paphiopedilum canhii), for free, from a Vietnamese friend. I still keep the last example of an extinct orchid, which was given to me as a gift, when I was a young boy, by an old veteran collector in Singapore.
(Disclaimer: I support wildlife conservation, and mass propagation of rare plants. I am known to give my rare plants away for tissue cloning, to ensure they survive in collections)
Here are some pictures I found (I have more pictures but I have left my files back in Singapore). I'll write a short description of each orchid below: 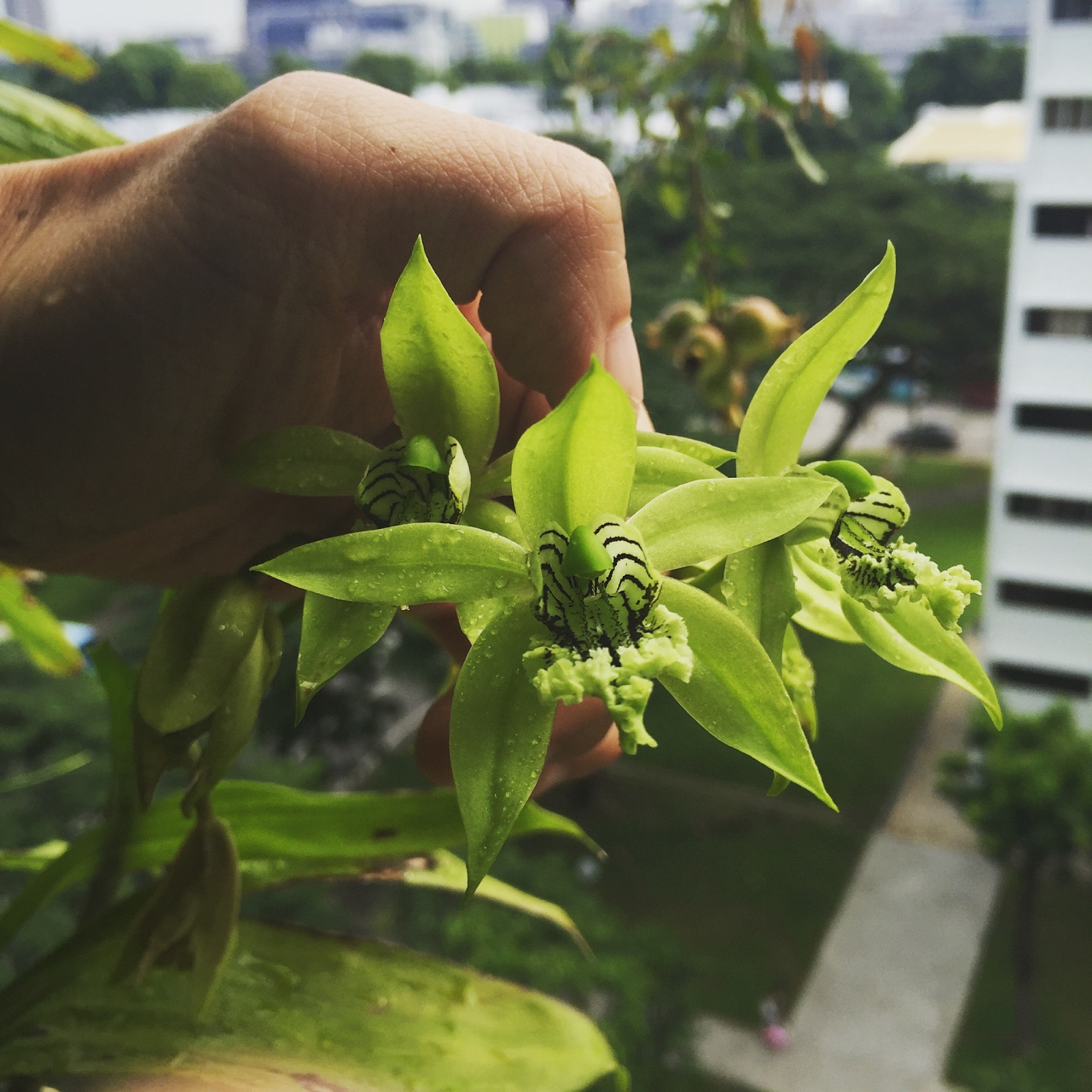 Coelogyne mayeriana - this orchid is almost extinct in the wild. It was over-collected due to its beauty. In the plant world, the colour black is almost impossible to produce, but this orchid has an almost black lip. It smells of apples. This plant was given to me for free. One day I spotted a wine supplier growing this outside his office, and he could not identify it, which I did. He gave me a cutting of it. I later gave a cutting of this plant to a watch collector who was a mentor to me. This collector has more than 150 pieces of watches- he likes collecting rare things too. 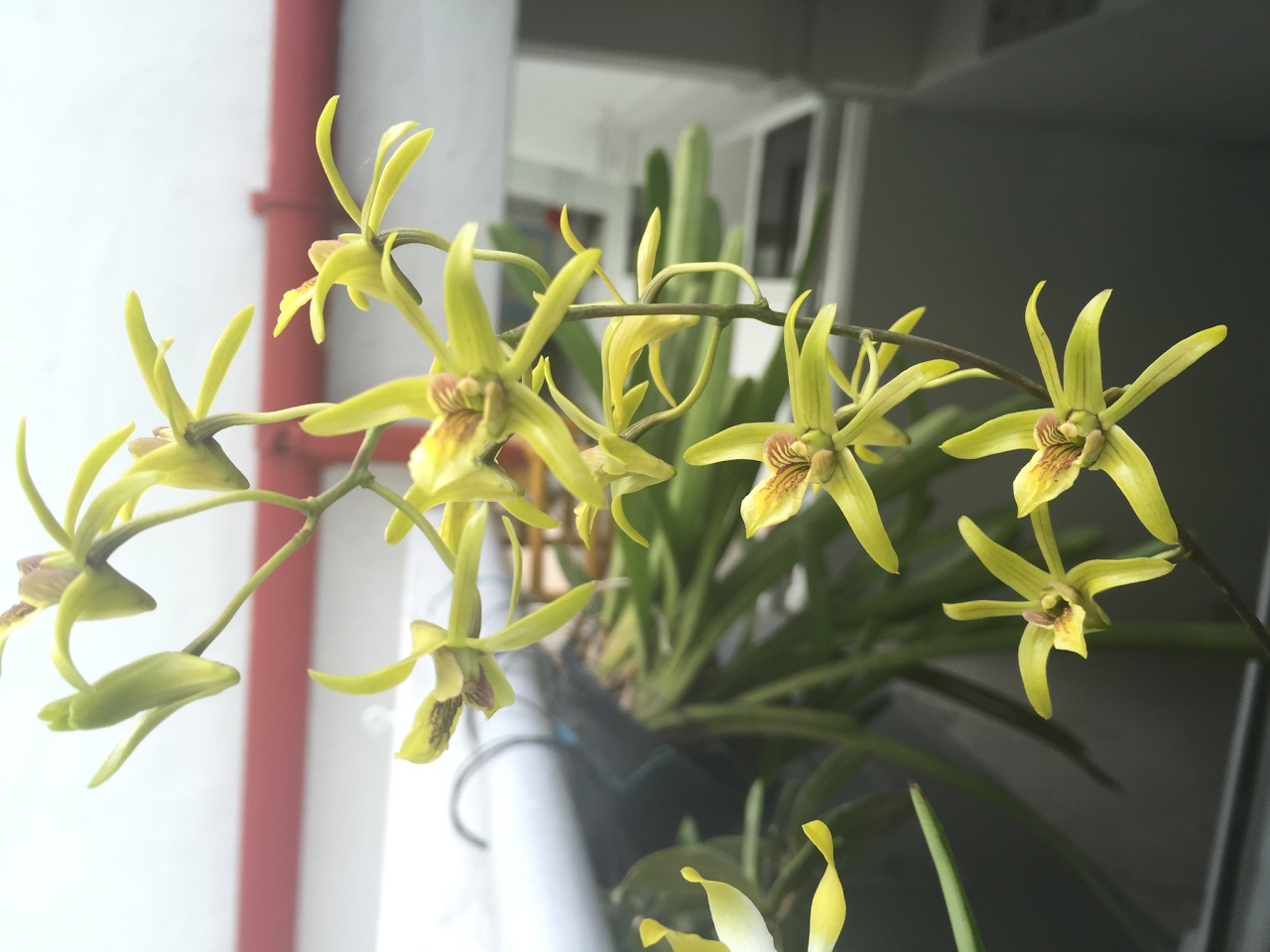 Dendrobium capra - this is prized for it's waxy flower, and green colouration. It is used to produce green hybrids. 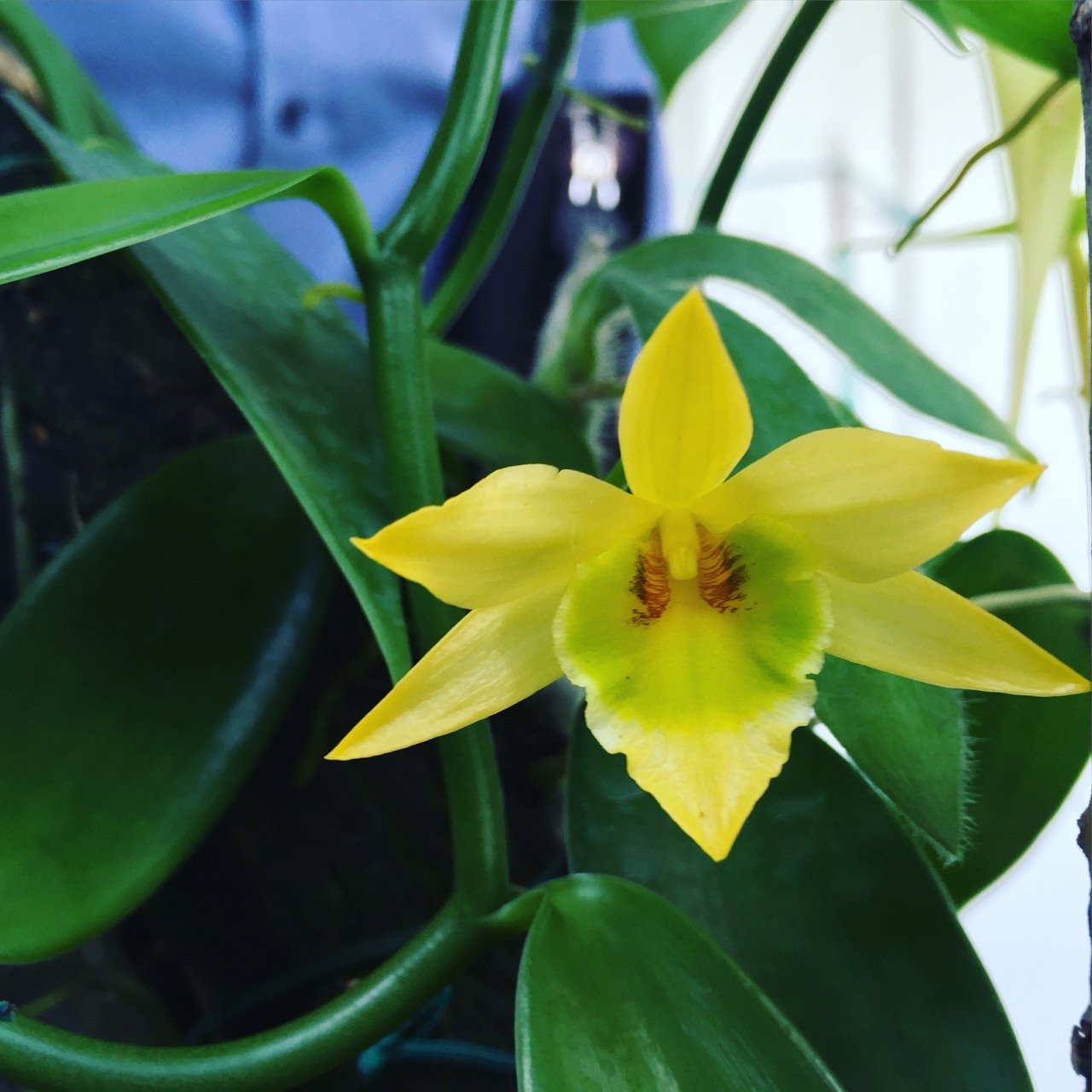 Dendrobium trigonopus and a vanilla vine growing around it. This orchid is not very rare, but it is a joy to grow. Flowers smell of the sweetest honey. 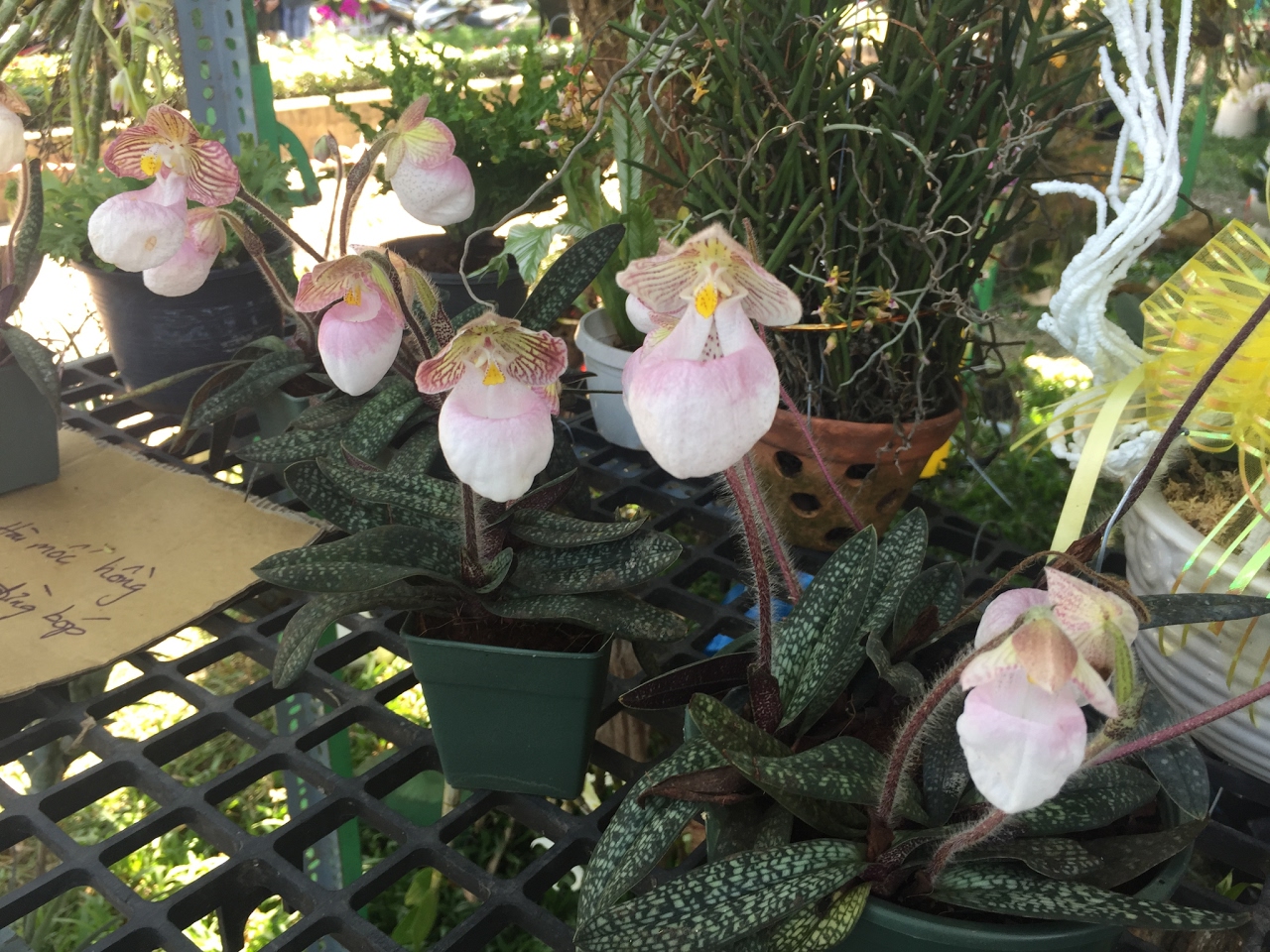 Ah, this is rare. I don't condone the practice of collecting wild orchids, especially these CITES Appendix 1 slipper orchids. This was taken in Vietnam where I used to live for a few years. The orchid is known as Paphiopedilum micranthum. There are new forms being discovered, such as those with white lips, bolder veins etc, and these are also being over-collected.
What a beautiful we live in. I gotta go dig up more pictures. Until next time...
login to reply
Comments: view entire thread

By: Cookies : June 6th, 2021-14:14
I have a confession to make - I am a serial hoarder. I like collecting things, be it teddy bears, good books, good watches, fountain pens etc. Among my favourite hobbies is collecting orchids. I still maintain 2 large collections in 2 countries, but latel...
login to reply

I salute you on your conservationist commitment!

By: ArmisE : June 6th, 2021-15:01
I honestly never viewed or appreciated orchids or any other botanical species in this way until your post. So thank you for opening my eyes to this beauty.
login to reply

By: Cookies : June 6th, 2021-15:10
Really thank you for reading this post. I wish I could share some of these orchids with you. Thing about orchids (they can be shared), thing about watches (they cannot be divided and shared). There are many beautiful orchids worldwide, for example in Euro...
login to reply

Here are some wild orchids photographed on hikes

You’ve definitely got me hooked now...

By: ArmisE : June 7th, 2021-02:16
as a man of science I’ve always appreciated the depth and breadth of what nature (including our own human species) can show us of true beauty. I’ve been trying to highlight the existence of this organic beauty that is all around us for my kids, and this a...
login to reply

The phenomena of transference

By: Cookies : June 7th, 2021-04:44
One can push kids to an intended direction by seeding thoughts and ideas in their imagination. I think if I did not get amazed by orchids, I could have continued playing videogames till no end. Perhaps if there was watchmaking in Singapore, I may have bee...
login to reply

Wow, my friend. That was unexpected. Superb flowers.

By: Cookies : June 6th, 2021-15:27
Here’s one rare orchid for u Nico. Dendrobium falcorostrum. It grows exclusively on Antarctic beech on highland forests in NSW. The tree it grows on is an ancient type of beech, theorized to be on the Australian continent even before it split off from the...
login to reply

Mother Nature offers us so many beauties! I love the tough of mystery, with this one.

By: cshimokita : June 6th, 2021-15:58
If you drill down, almost everyone has an interesting and personal story to tell... and yet I can still be surprised by a pastime such as this... wonders of nature indeed. Lovely photos as well as a very interesting tale. Casey .
login to reply

Do visit Orchid World in Barbados if you are ever in the region.

Reminds me of my grandma. She was into this. But I was a kid then and didn’t get what the fuss was all about. I just saw them around the house. Great post. You never know what kind of memory it’s gonna randomly trigger. In my case..

Ah you triggered a memory too

By: Cookies : June 7th, 2021-04:36
I got into this hobby as a kid. I used to get addicted to videogames and my dad used to try to wean me off the videogames. And so, he bought me an orchid book, and let me have a small area in the balcony to grow orchids. He was right - the videogame addic...
login to reply

By: Quan : June 7th, 2021-05:46
for me as this is far beyonds what my shallow knowledge of orchids, which i get to know when I was a kid when my dad grow a few at home....all the normal stuff but his tale about watches which stuck me into this WISdom abyss thank you to enlighten me
login to reply

By: sergio : June 7th, 2021-22:20
your orchids and my little critters, are pretty similar to one another. There's in infinite variety of them, out there. One just has to go look...
login to reply

You're a man with many talents. Still swimming?

By: Cookies : June 8th, 2021-06:33
No talents, just hyperactive and need to control the overactivity with activities
login to reply

By: sergio : June 8th, 2021-19:41
have reopened. There are limitations, to be sure, but with the vaccine I.D. cards being issued by individual countries (ahead of the Pan European one) it's possible to fly and not having to be quarantened on arrival
login to reply