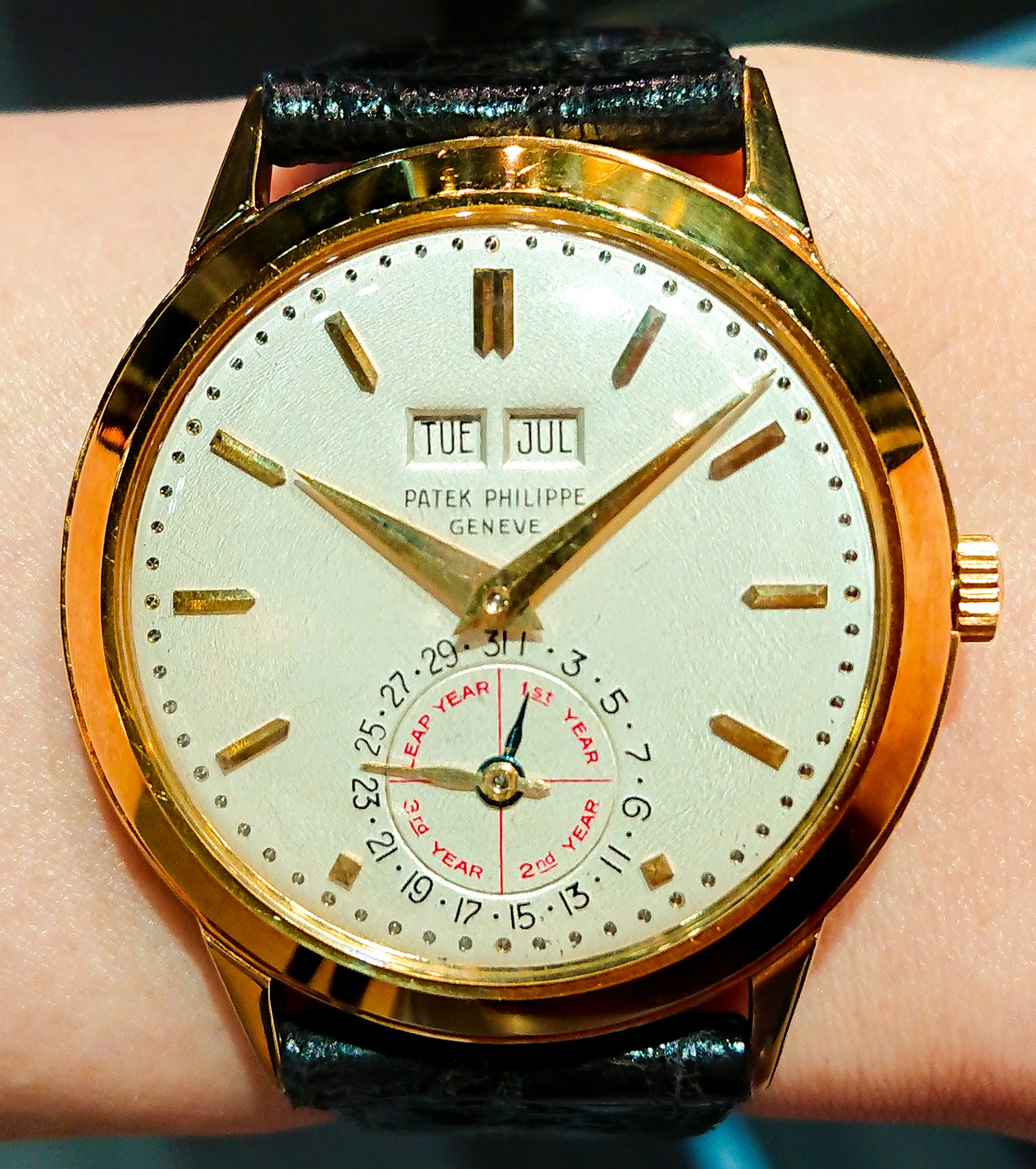 In recognition of his services, Henri and Philippe Stern commissioned a 3448 to be modified and subsequently gifted. One of these modifications resulted in a characteristic that collectors refer to as ‘Senza Luna’ (without moon); of the 586 3448s, there are seven recorded examples. What makes this piece even more distinguished and ultimately a piece unique is the addition of a leap year indicator in place of the moonphase (represented by the red text in English and the inclusion of a second hand co-axial with the date hand) which necessitated the modification of both an existing dial and movement. The watch was presented to Banbery in 1975 and was his personal timepiece until it was sold to a private collector in 1999.

Having the opportunity to wind it, strap it on the wrist and listen to the movement ticking, made me imagine all the history this watch was an eyewitness to; a humbling and exhilarating experience.

By: lavrentivs : May 10th, 2022-18:24
Alan Banbery was appointed the Director of Sales for the English-speaking Territories in 1965 where he did much to develop Patek Philippe’s position in the market. In addition to this, he also did much to guide Patek Philippe’s commitment to the preservat...
login to reply

By: keks : May 10th, 2022-18:28
Just a spectacular piece for so many reasons you generously detail above! Thanks for sharing!
login to reply

You are lucky to have seen it in person...

Yes, it is not in the correct position.

Love the patina on the case

Very ibteresting 3448, I did not know of it. Thank you for the informative post. 🎩

By: ChristianDK : May 10th, 2022-20:01
So for me, this piece is extremely interesting and desirable. I have seen pictures before and knew the story but it’s the kind of special thing that is so. Ice to be reminded of. Thank you for a great post.
login to reply

A true piece of History and a pretty nice one!

Sorry to burst your bubble but I stated a "second hand" not a "seconds hand".

By: lavrentivs : May 11th, 2022-18:52
In hindsight I should have stated "another hand" instead. Do pardon the confusion.
login to reply

Thank you so much

One of the most fascinating chapters of the history of this discipline concentrated in only one watch! Thanks for sharing this marvel! :-)

Fascinating piece !! You were lucky to see it, not to mention you put it on your wrist ! I was wondering though, how come the 4 years' hand has changed quite recently, when the date shows July ? How is the movement of the Years' hand ?

The hand is not in the correct position.

Thanks for the feedback, that's the feeling I had ! :)

Thanks for the interesting background story !

No worries 😉 I should have read it

Thank you very much for this scholarly and thought provoking post. Of the Senza Lunas I have seen in person or in photographs,

By: patekova : May 11th, 2022-19:47
the Banberry is for me by far the most complicated and compelling. The others simply have a blank where the moon would be and accordingly no leap year cycle indicated and no 2d hand. And thanks for pointing out the functionality of that 2d hand the functi...
login to reply