Lange und Sohne Langematik Anniversary. It could have been for ten years in my collection...

If only it didn't left me in some sad circumstances.

I was hunting this watch for several years before being able to find one in Paris, on the 7th of November... 2008. I was totally crazy for that Langematik, for some good reasons: Its 37 mm case, which is big enough for me, a platinum case which offers a nice density, the superb enamel dial with its gorgeous Red XII and a very pleasant depth and warmth, and a nice looking automatic movement with a three quarter rotor.
This is a watch I wore a lot, with an intense pleasure till the 18th of January 2011... But that, you already know.
The cruel thing is that before leaving Paris for the SIHH, I wanted to take it with me, for the watch fair, and I stupidly forgot it...
At that moment, I was lucky enough to own the three most important Lange watches, from my point of view: The Datograph, first, then this Langematik Anniversary, and last but not least, the sublime 1815 Moon Phase Hommage to Emil Lange. A platinum threesome by all meanings! 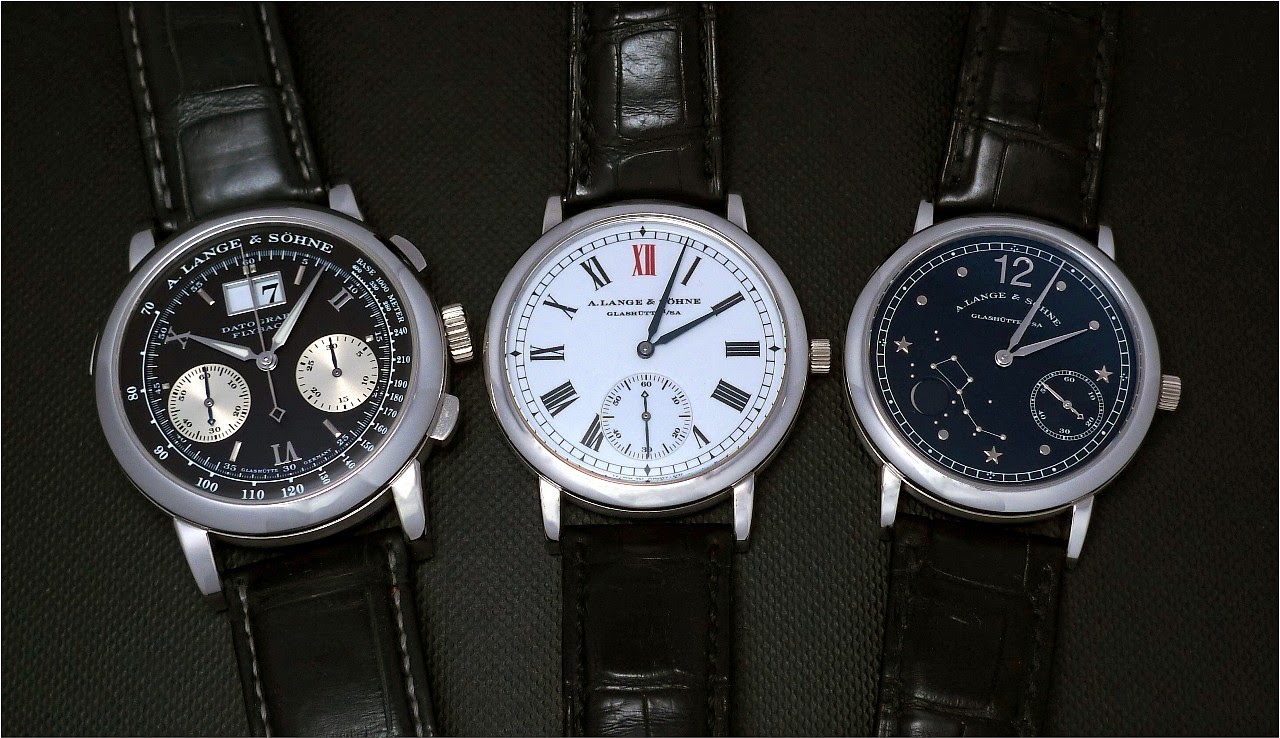 So, three weeks ago, a good friend offered me to borrow his Langematik Anniversary for one month... I must confess that I hesitated a bit, as I still feel the miss, deeply.
But on another side, I wanted to feel the watch once again, and I accepted this very kind offer.
Believe it or not, but once I had it with me, it took me some days before putting it on my wrist. I fell in love, once again. Deeply. 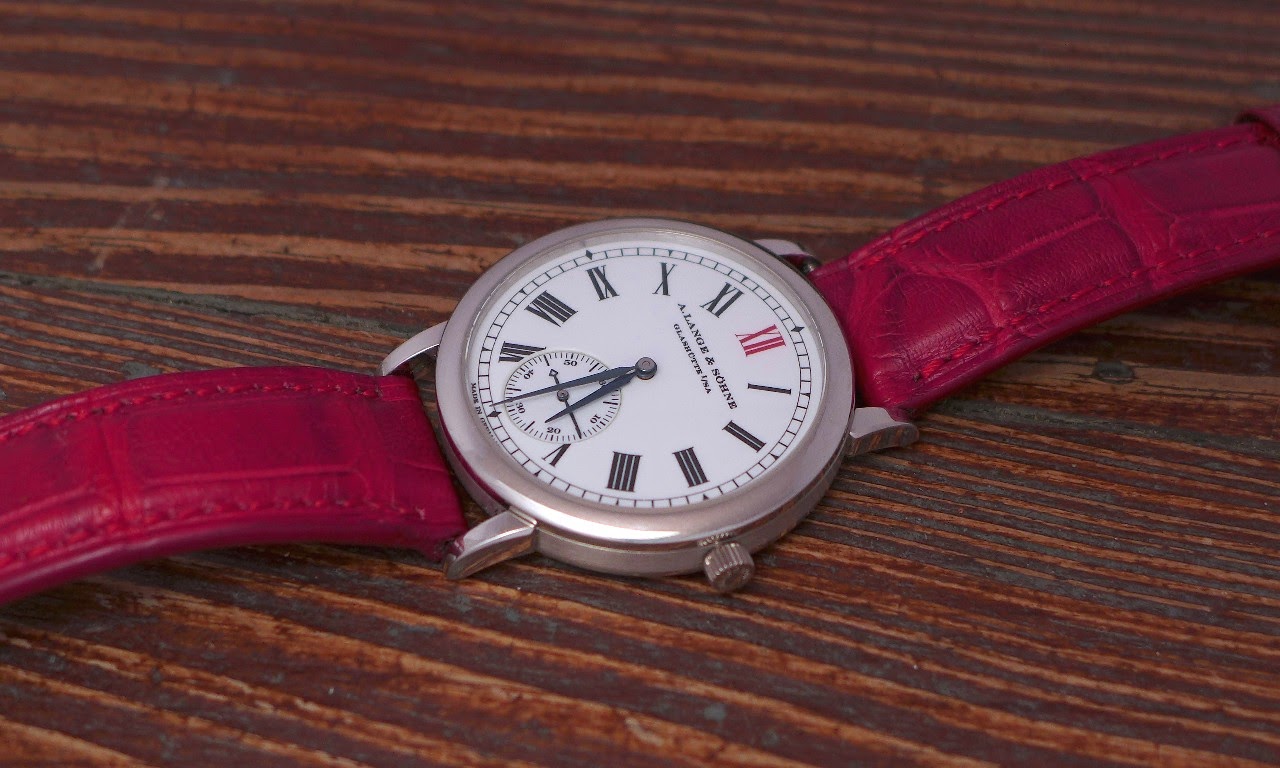 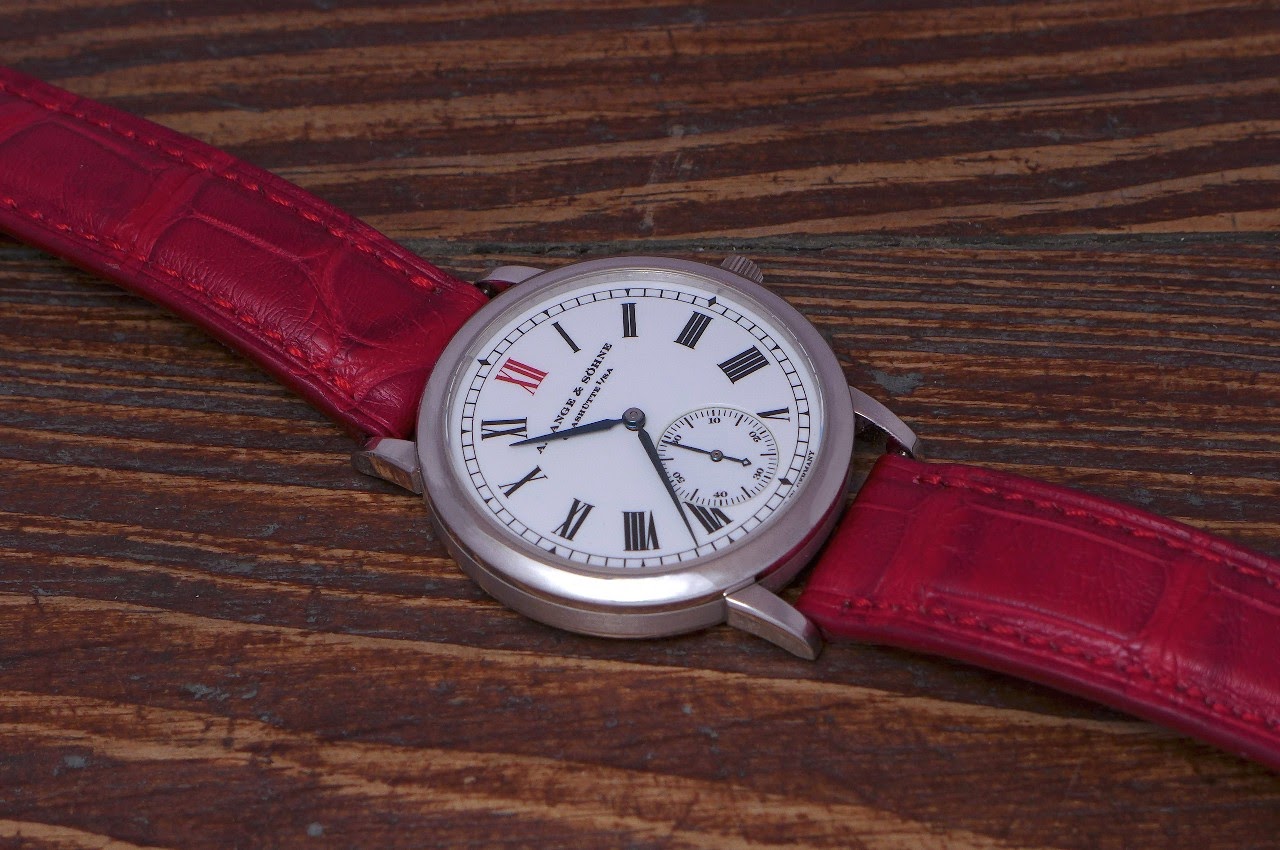 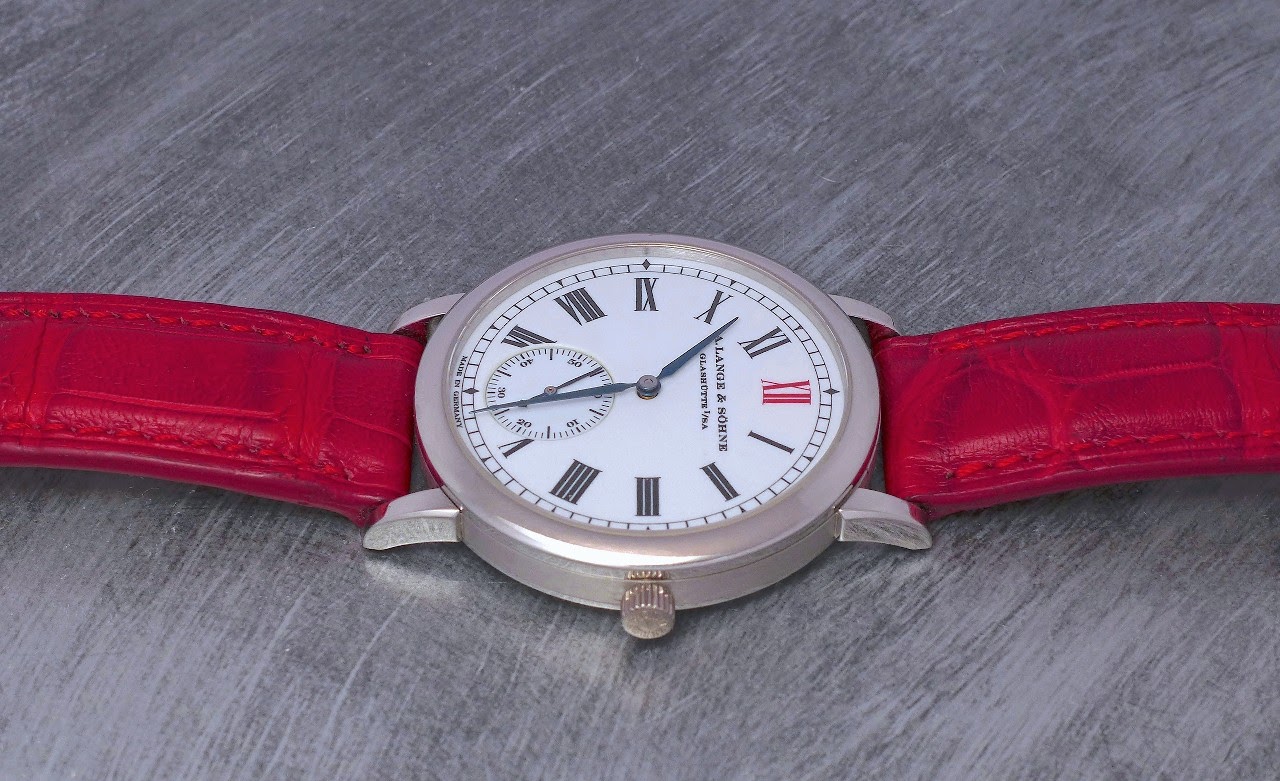 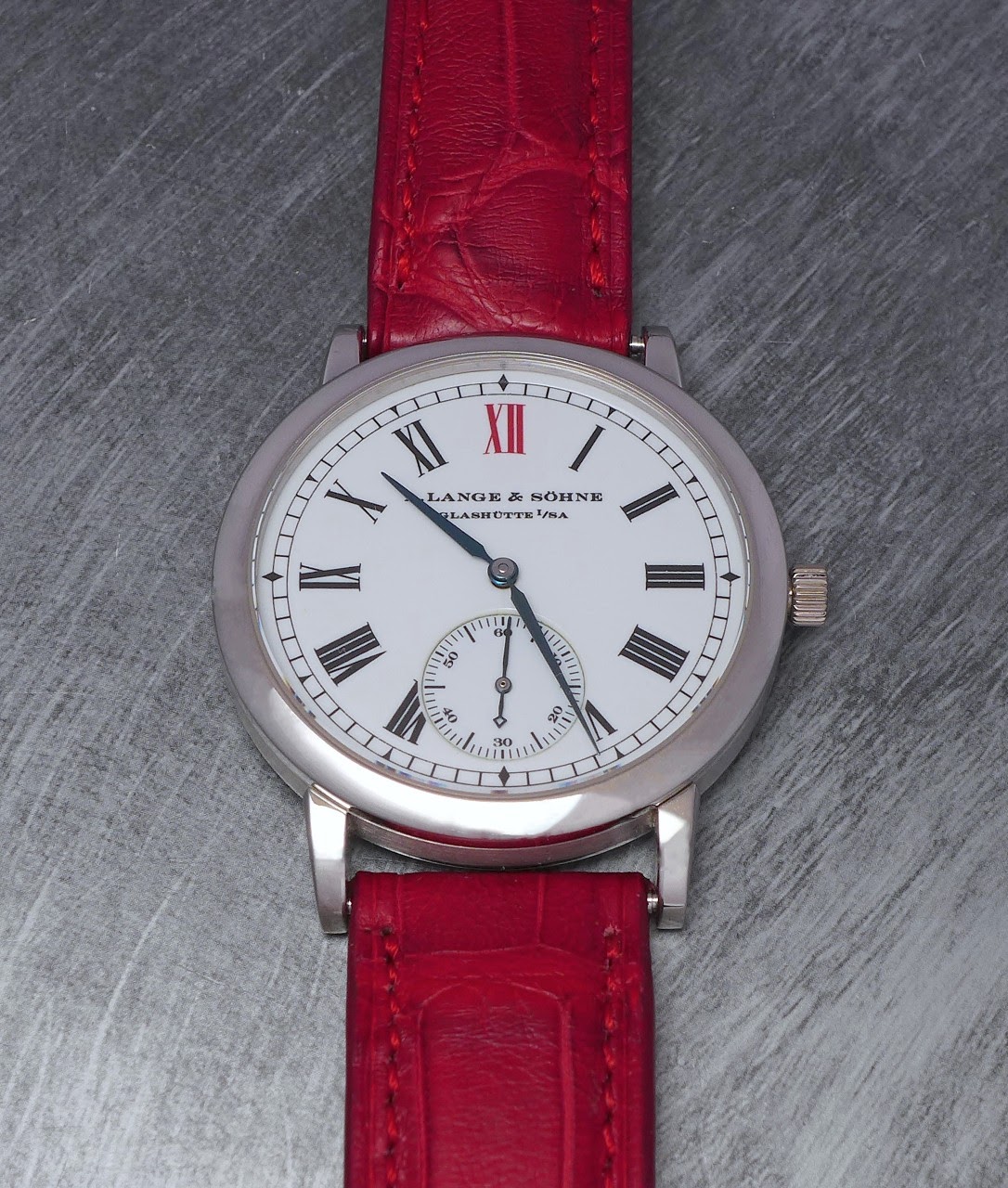 Ok, I received it with a red alligator strap. Which was funny, at the beginning, but a bit too much quite quickly. So, I opted for its original black alligator strap, which is one of the best combination for that watch. The black strap enhances the natural elegance of this Langematik Anniversary, better, it exalts its beauty, and specially the dial which is the more bewitching part of it. 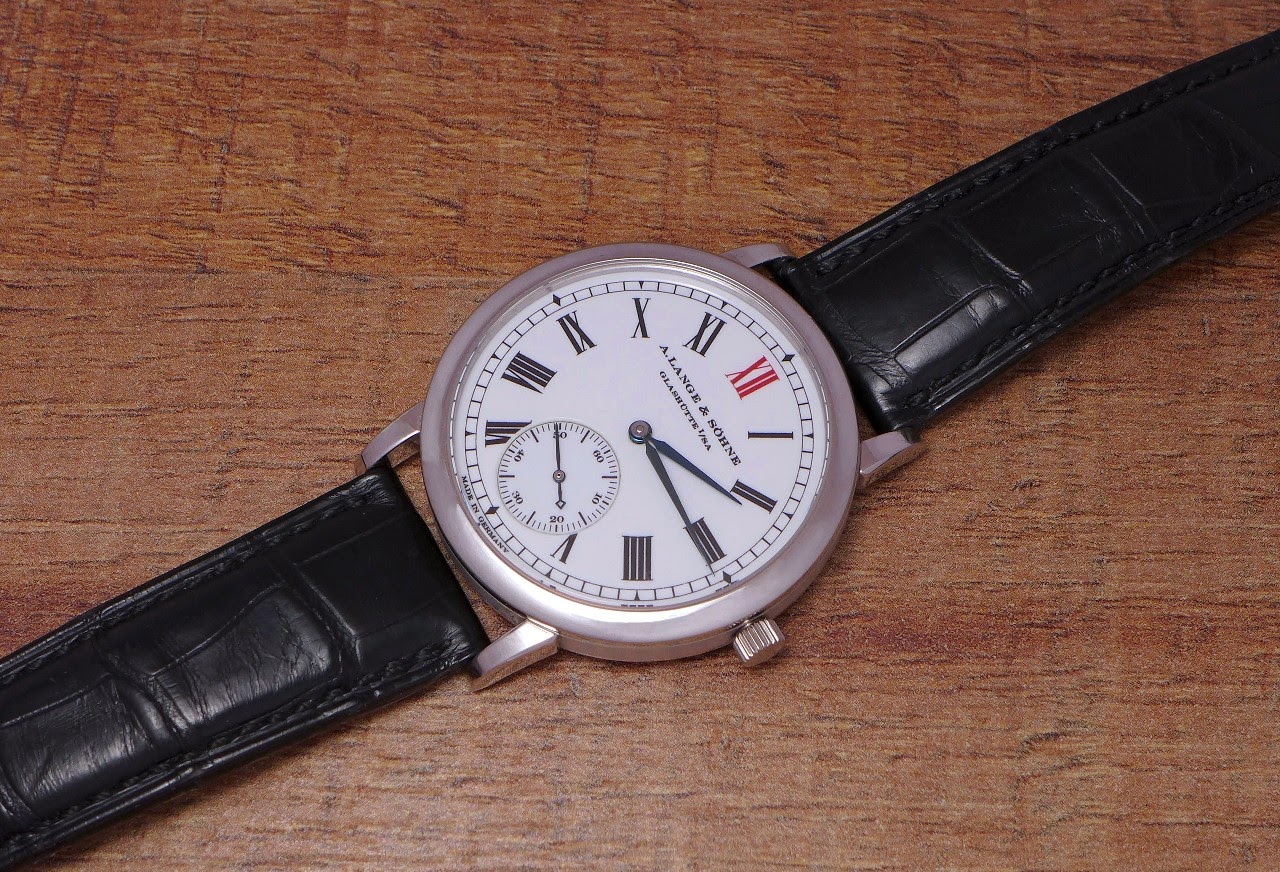 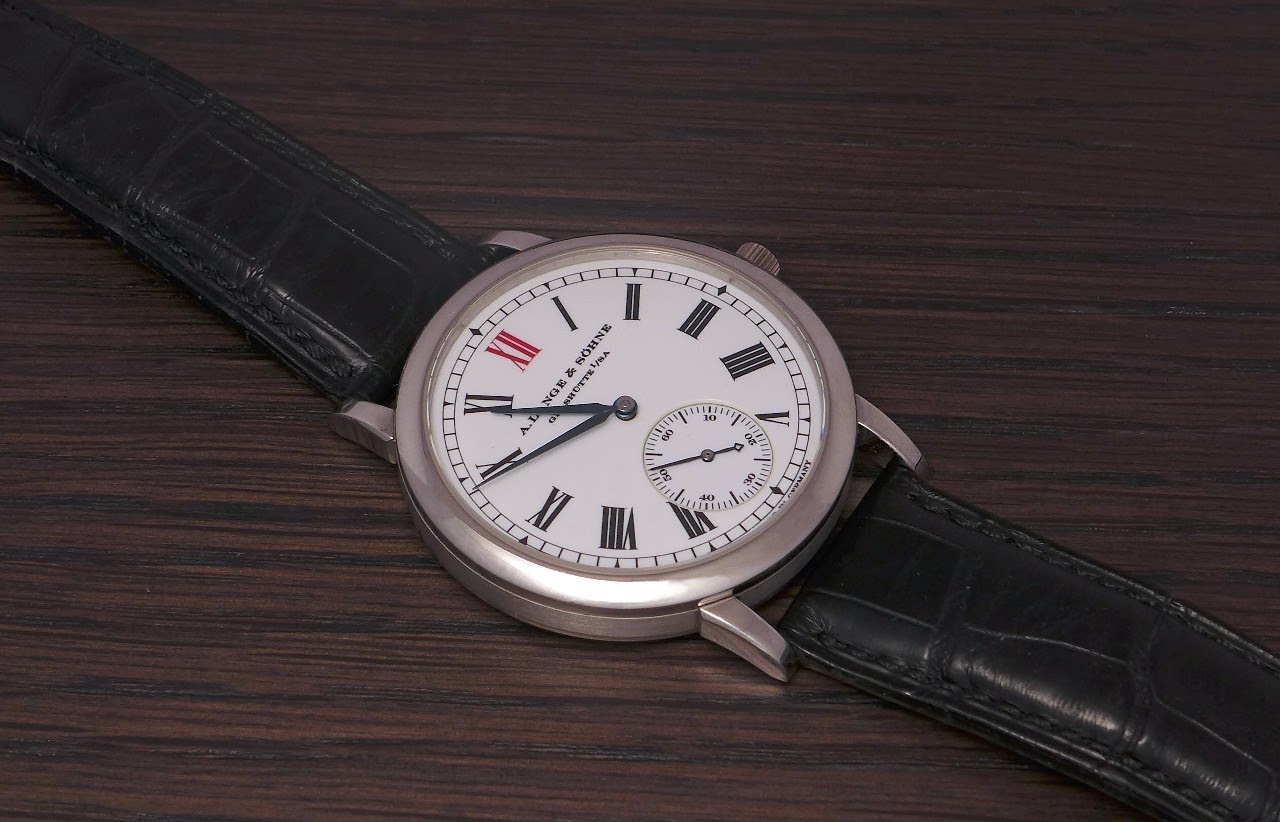 One picture of the movement, which is worth a look, even if the automatic  construction takes some place, but which is, as I said, a nice looking one. Very german but beautifully decorated: 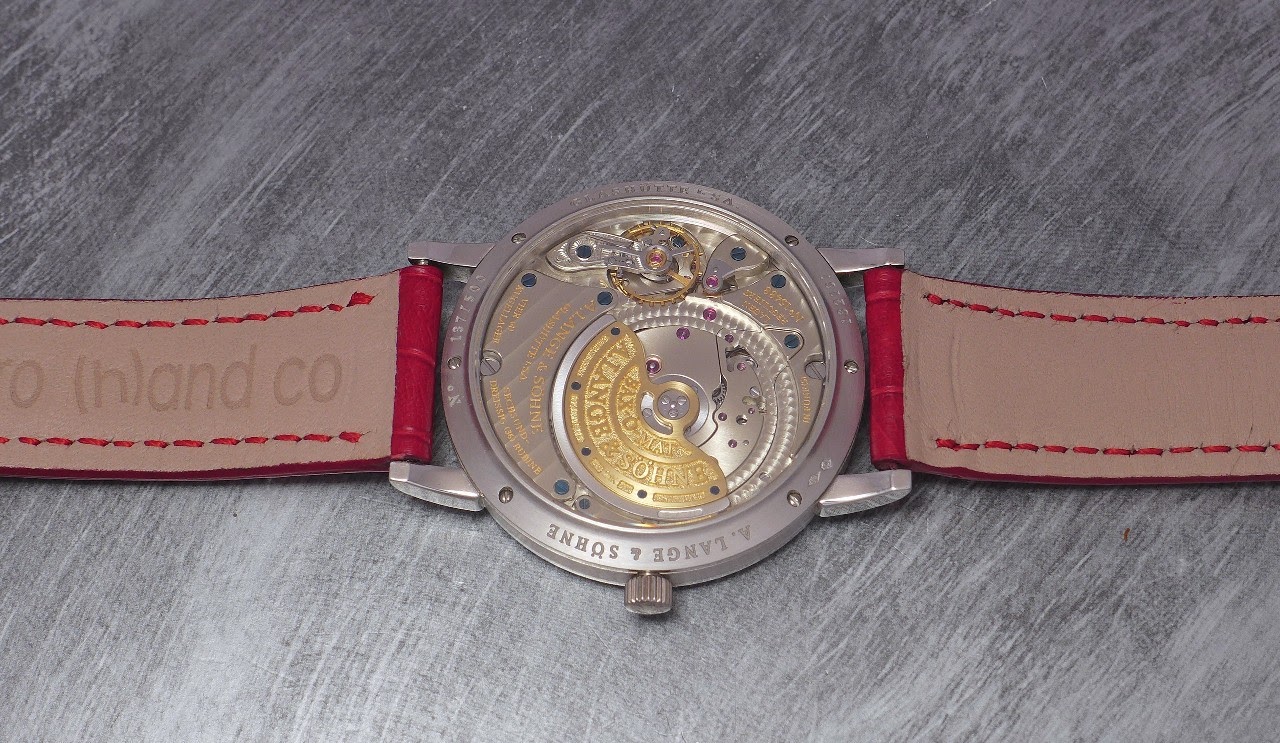 Now the problem will be to give it back to its owner... But it is better to live and love than living without loving. 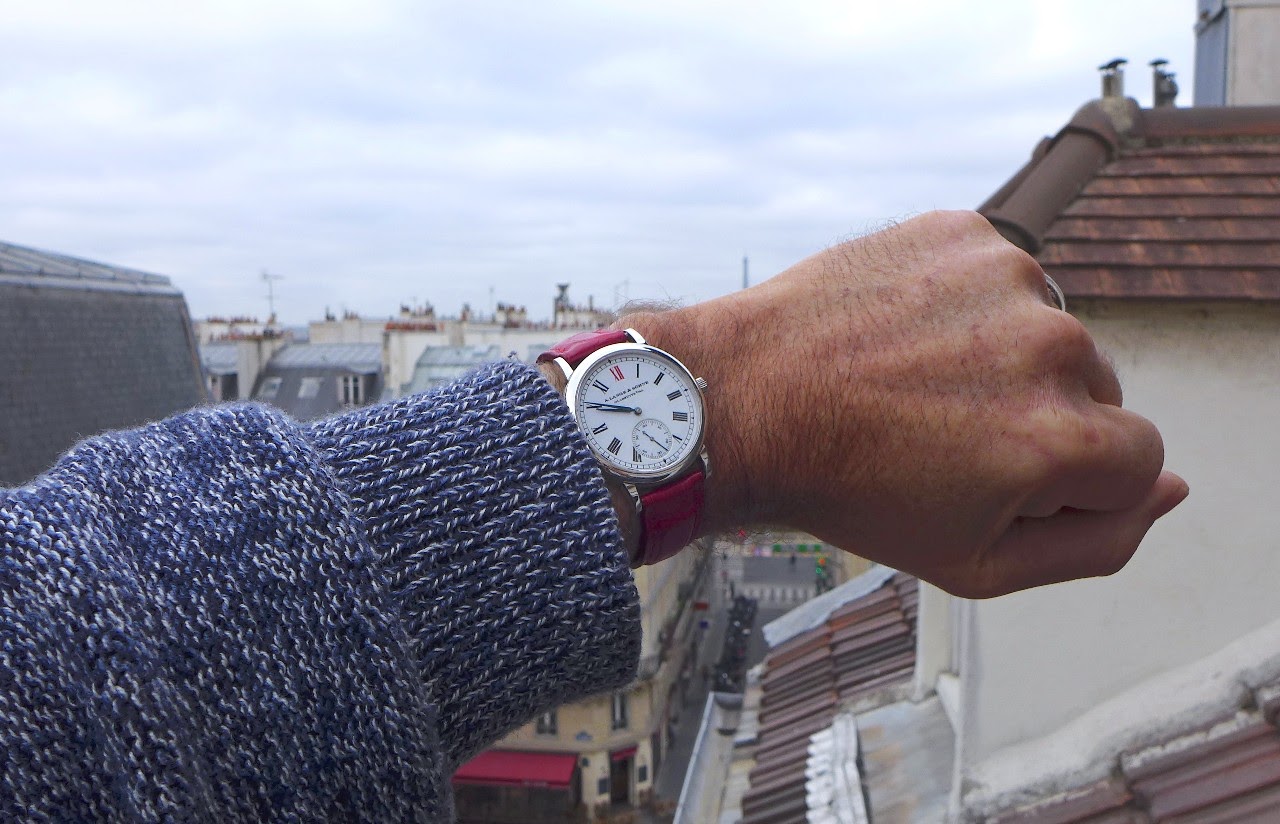 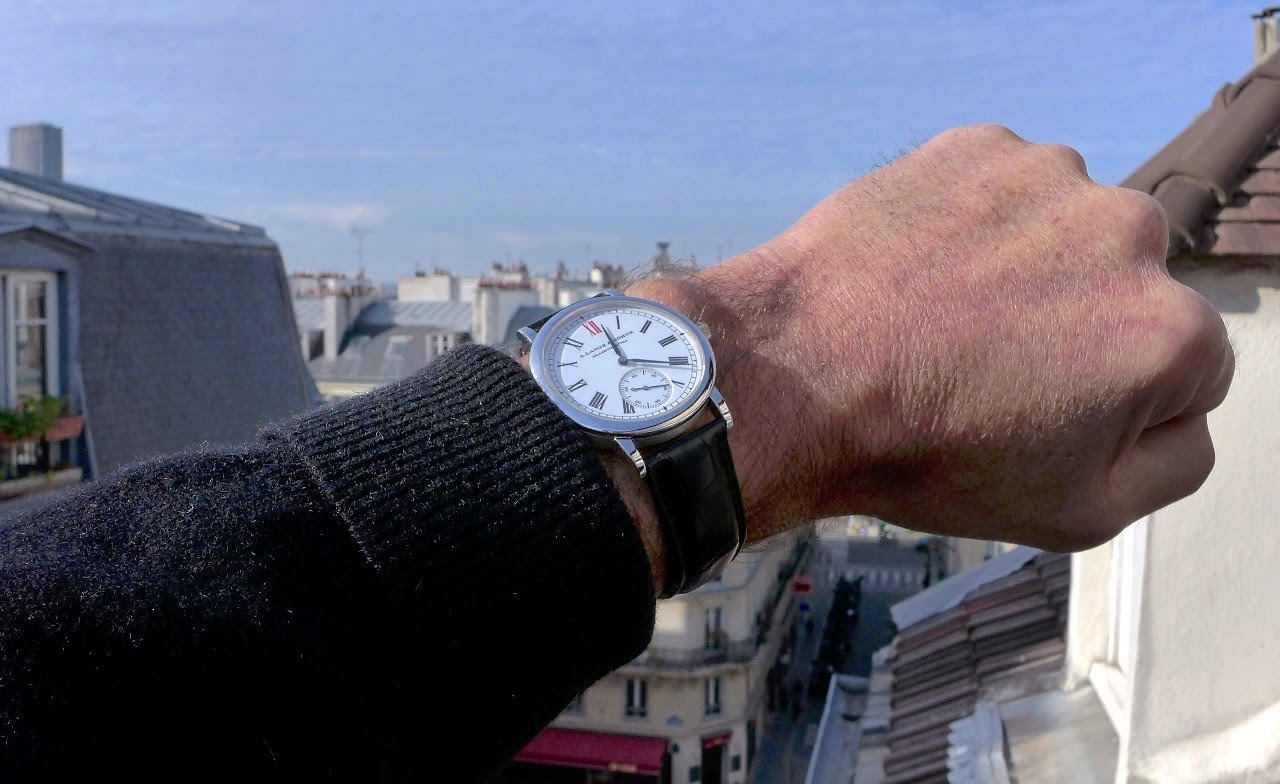 The other problem is that it is very challenging to take some good pictures of it, because of the round bezel which catches all the reflections, and the enamel dial which is very hard to capture. But I hope you will enjoy the fresh pictures, though.
Clearly one of the watches I regret the most, with the Vacheron Les Historiques Chronograph in platinum and its salmon dial, the Datograph in platinum, and the Jaeger LeCoultre Duometre à Chronographe in platinum, just to give you an idea of how I ranked it.
Best,
Nicolas

Lange und Sohne Langematik Anniversary. It could have been for ten years in my collection...

By: amanico : November 7th, 2018-00:45
If only it didn't left me in some sad circumstances. I was hunting this watch for several years before being able to find one in Paris, on the 7th of November... 2008. I was totally crazy for that Langematik, for some good reasons: Its 37 mm case, which i...
login to reply

By: afl : November 7th, 2018-01:31
Definitely an extraordinary watch hidden behind so pure and elegant design. Like everyone here I am also following your posts with a big interest and discovering that we have similar tastes in some places especially as an owner of a Datograph, Grande Reve...
login to reply

It seems that we have very close tastes in watches, Kerem. Definitely. This Langematik Anniversary is stuck on my wrist for almost 3 weeks! As for the 5970, I am studying the possibility to get one... Thanks! [nt]

very charming piece this one

That's why I enjoy it at the maximum. Thanks, Keks. [nt]

My pleasure. Thanks fo your kind words, Langepedia. [nt]

Yes, a lovely watch again, so unique, so elegant. A dream, enjoy it, before maybe get one again. Why not finally ? [nt]

By: Watcholic_id : November 9th, 2018-23:20
For me, the Langematuk anniversary & the 1815 MO Emil Lange would be a superb duo. Absolutely brilliant piece 😍😍😍 And i hope you will find justice for this issue very soon, my friend 🙏🏾🙏🏾 Cheers
login to reply

Thanks for your kind words, my dear friend. Let's keep fingers crossed! [nt]

Here’s mine for your viewing pleasure

By: Stylophile : November 14th, 2018-18:17
Bought it from a friend in Europe around 2002; he wore it once and put it away; didn’t like the red XII ( can you believe it!!) sold it to me at a significant discount from the original sale price. I guess that’s what they call a lucky break. It’s a keepe...
login to reply

And you did very well! It is on my wrist for one month, now, and my heart is bleeding at the idea to give it back to its owner. [nt]

By: David Elliott : November 19th, 2018-18:35
One of the best looking watches ever produced. The red strap is a nice alternative to the black.
login to reply

Agreed on the red strap, but you get rid of it quite quickly, though. As for the watch, here again, I have to agree. One of the most appealing Lange in my opinion. [nt]

By: rnaden : November 19th, 2018-20:07
I like the red XII against the white, and the automatic, that makes a daily wear more practical. Great write up, and here’s still hoping with you that you’ll get yours back someday soon!
login to reply

Thank you, Richard. This watch has to be seen in the metal to fully understand it and to get its charm, indeed. [nt]