Watches and Wonders 2022: Hands on review on the Ulysse Nardin Blast Moonstruck. 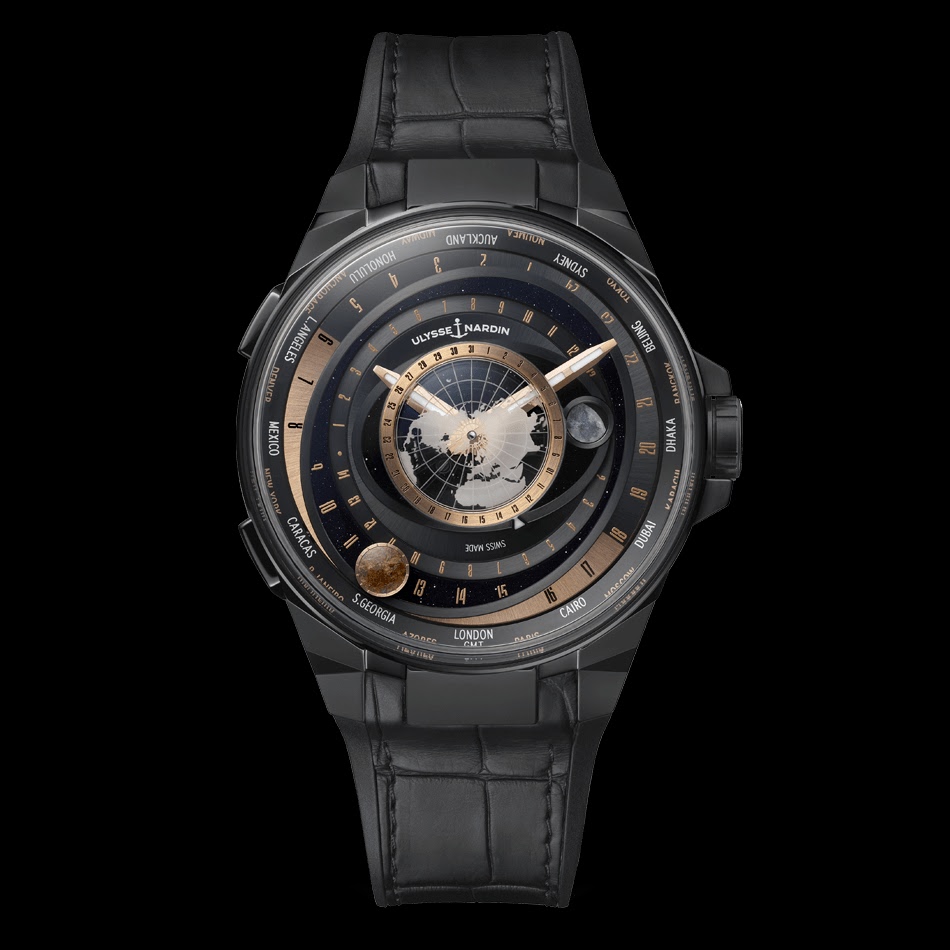 For 2022, Ulysse Nardin decided to unveil the third opus of the Moonstruck which was born in 2009. First in rose gold, the, a bit later, in platinum: 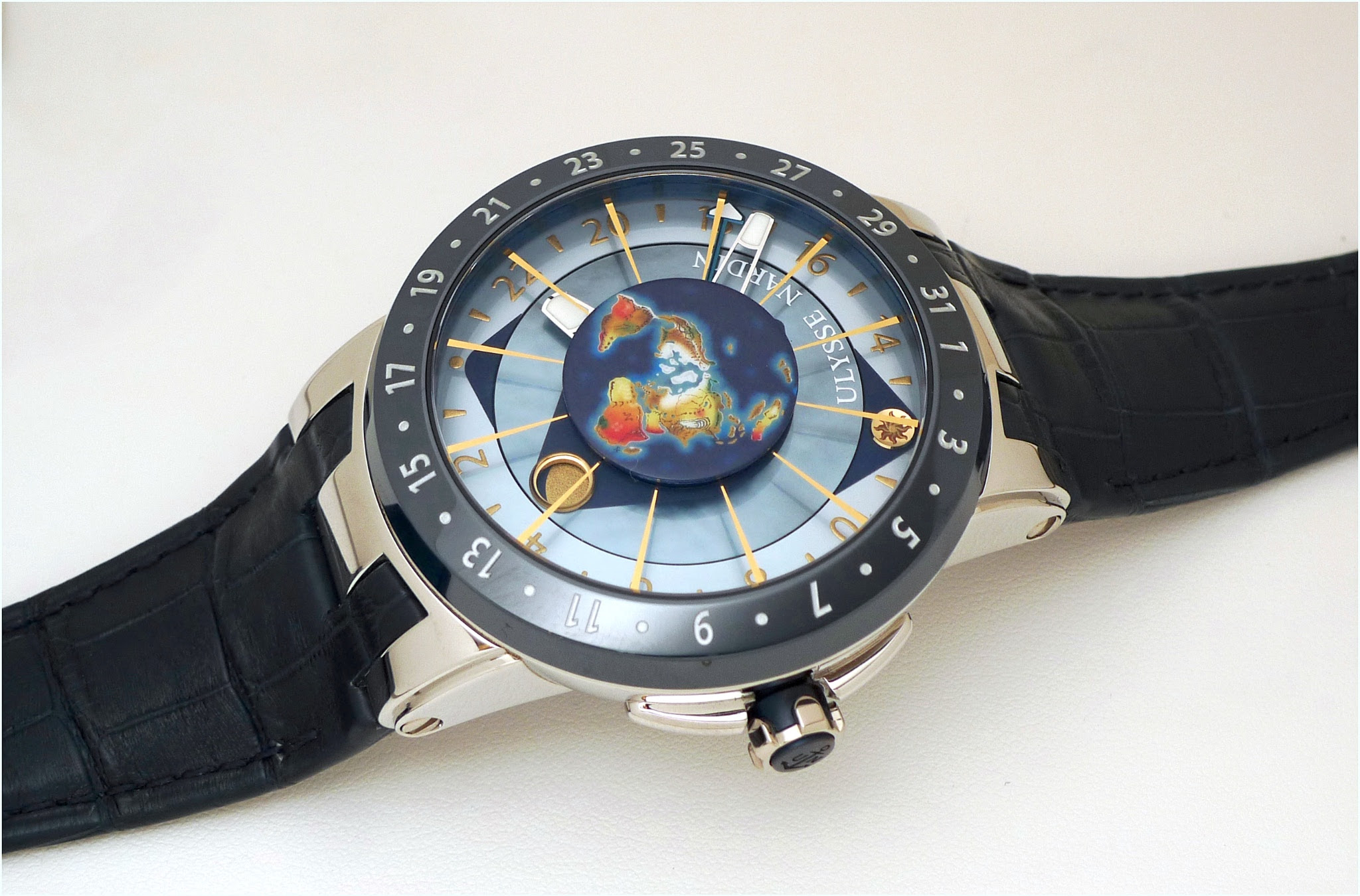 The 2009 Moonstruck was a simpler approach ( simpler in the fact  it is less complicated to understand ) of an astronomical watch, compared to the Tellurium, the Astrolabium and the Planetarium which were born from Mr Oeschlin's genius mind in... 1992.
Here is an extract of the press file from 2009:
The first opus depicts "  the rotation of the moon around the Earth. as wall as the apparent
movement of the Sun around the globe. The latter Is shown by another disc. rotating once every 24 hours
This permits the determination of the current moon phase in relation to any location on Earth."
It also shows the tides. The following illustration will help you to understand how it works: 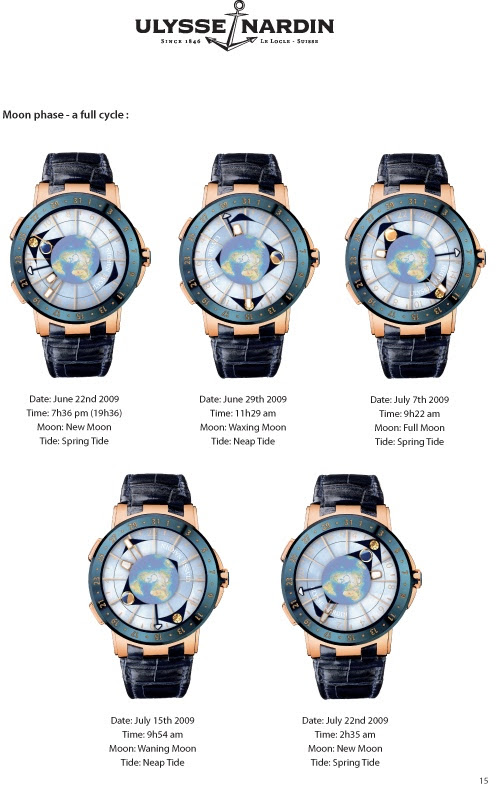 In 2017, Ulysse Nardin unveiled the second generation of the Moonstruck, the Executive Moonstruck World Time, adding the world time complication to the former ones, being precised that the original Moonstruck is also a GMT indicator.
Aesthetically, the dial changes, the location of the date too, which moved from the bezel to an inner ring all around the Earth: 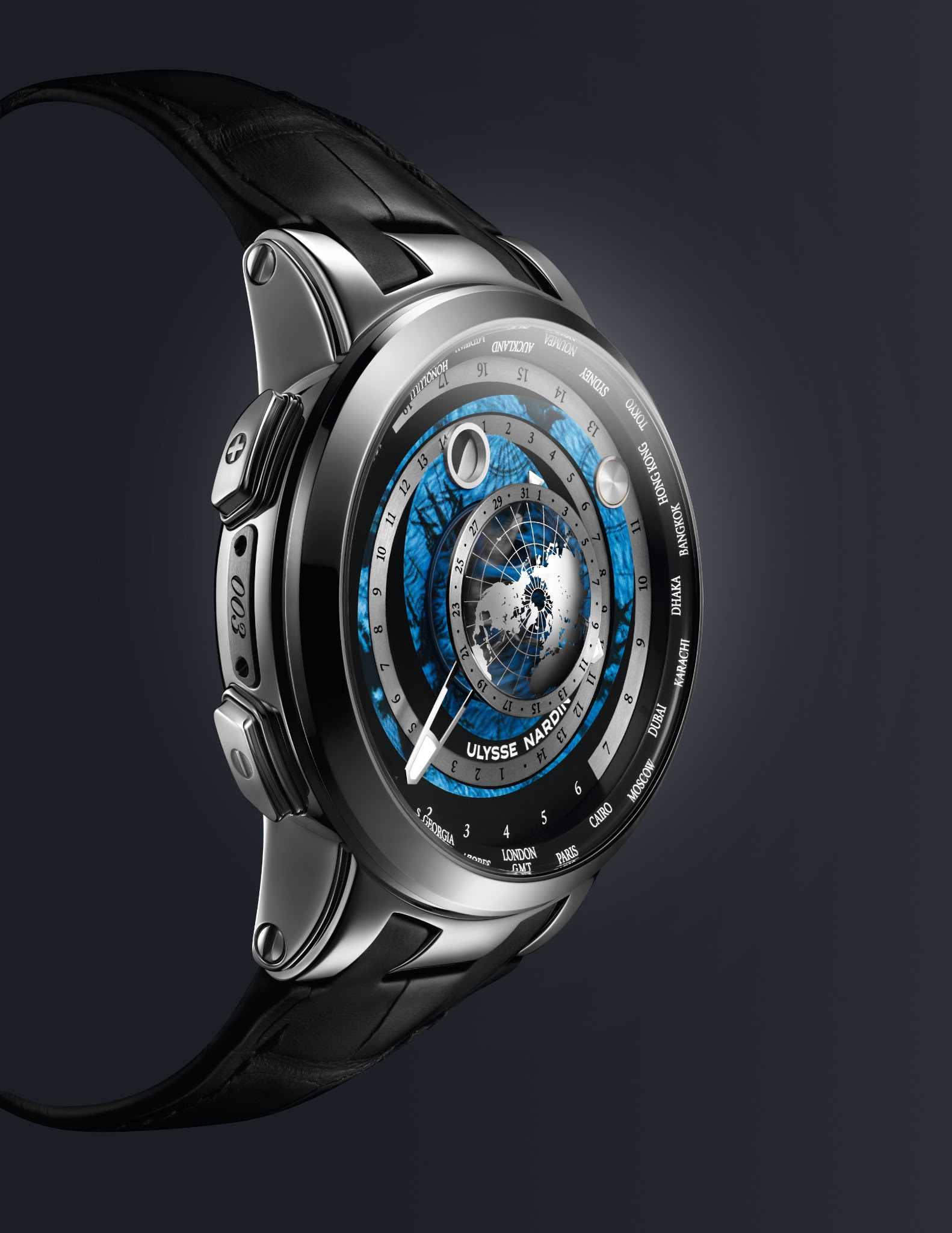 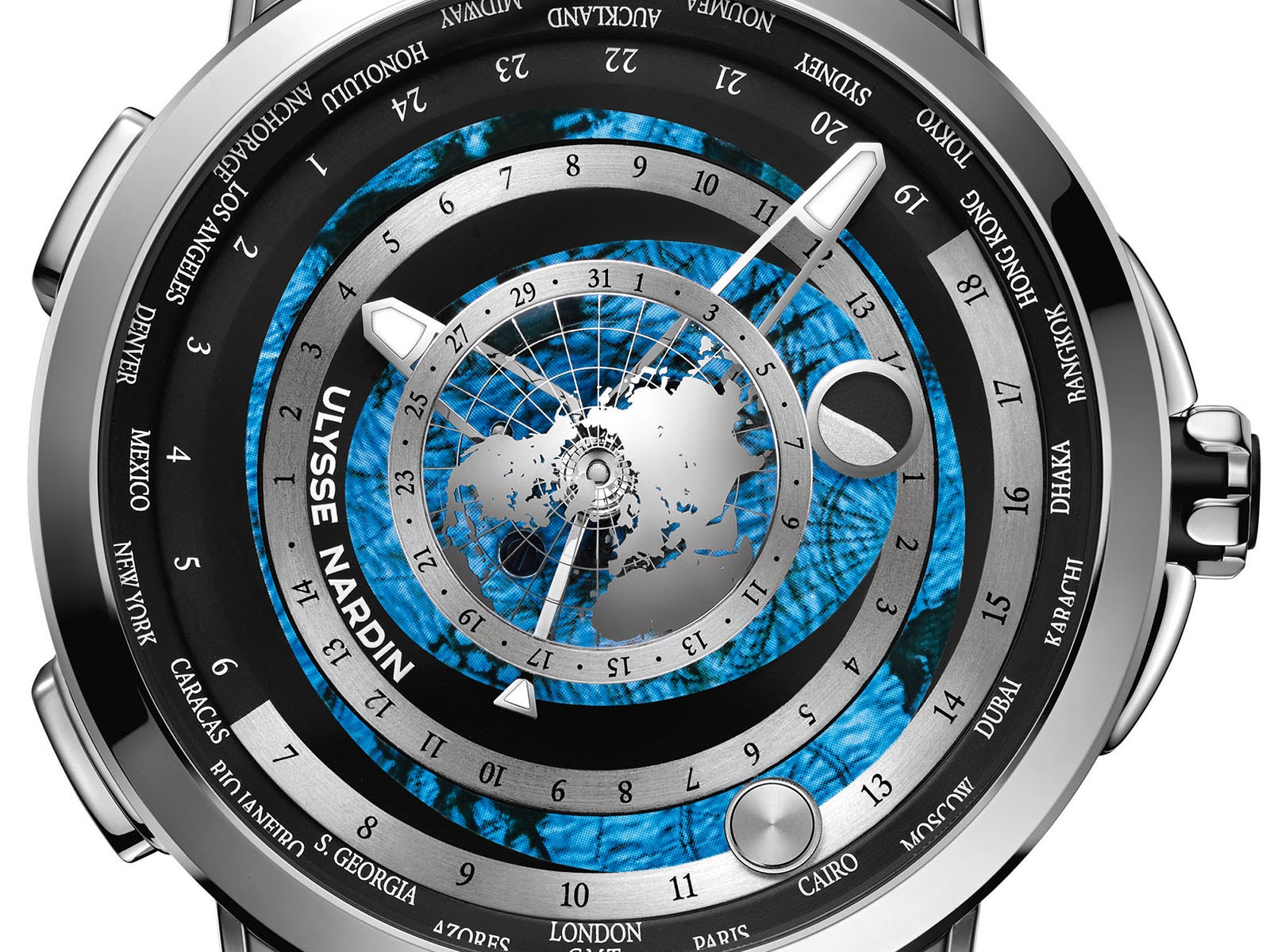 Like the former Moonstruck, the " World Time " case is 46 mm big, and water resistant to 100 meters.
At first glance the 2022 Blast Moonstruck  is very close to the 2017 edition. At first glance, only. Indeed, if the complications and informations are the same and displayed in the same way,   as well as the movement, there are some big changes:
- First of all, the case is different, with more angular lugs, and... One millimeter smaller ( 45 mm versus 46 mm ). The case is not made in precious metal, but in black ceramic, and black DLC titanium. It is 50 meters water resistant now, while the former Moonstrucks were 100 meters. 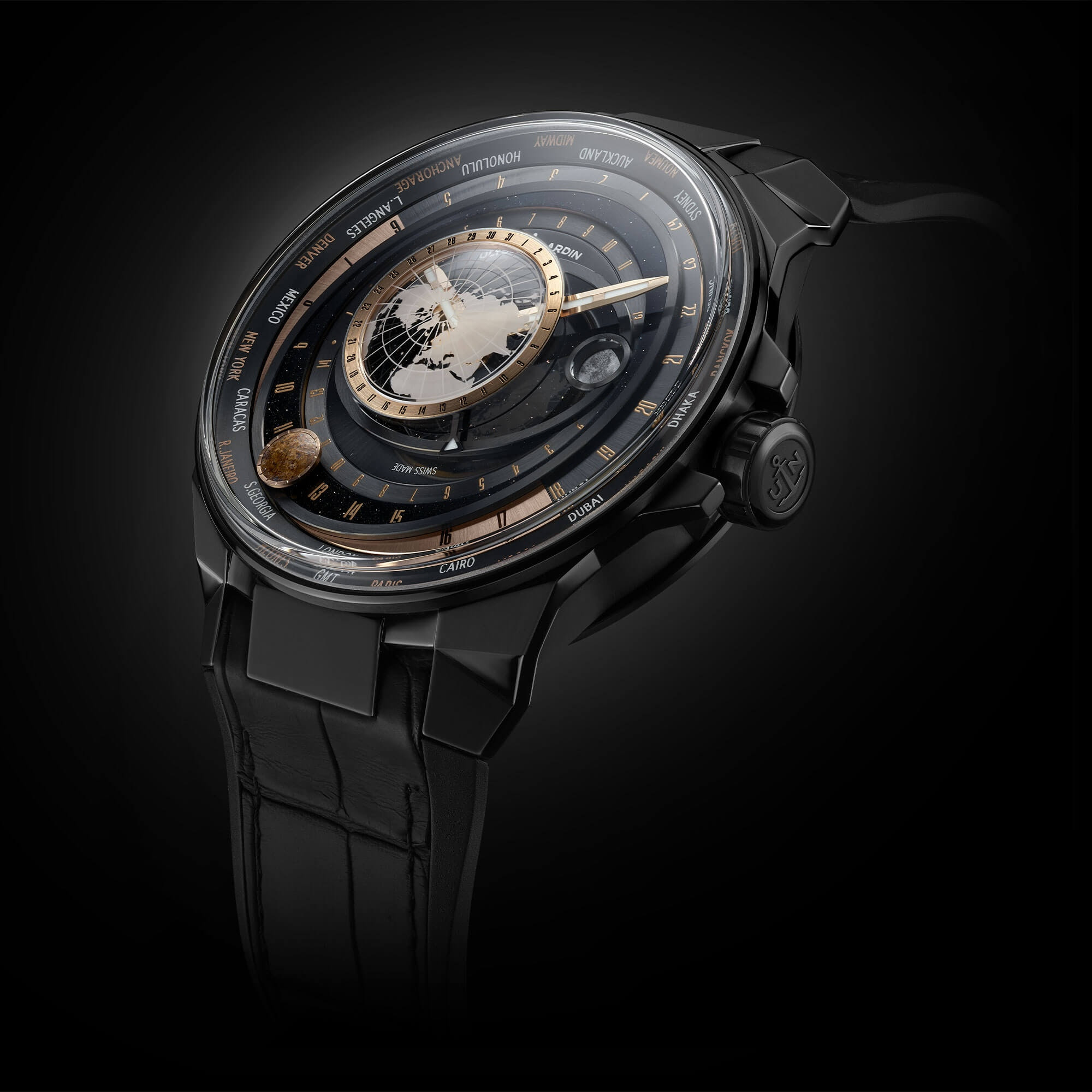 - The dial plays the card of astronomy in a bewitching way. Here you are floating in Space as a part of the Universe, you are looking at the Earth, Moon and Sun from above. This feeling is mainly provided by this black aventurine glass dial, shining like tiny stars on a summer sky.
The sun is sublime, made in Bronzite, while the moon is superbly looking, but it is a simple décalque ( tracing? ) . At that level of beauty, I would have loved seeing a moon in... Meteorite! 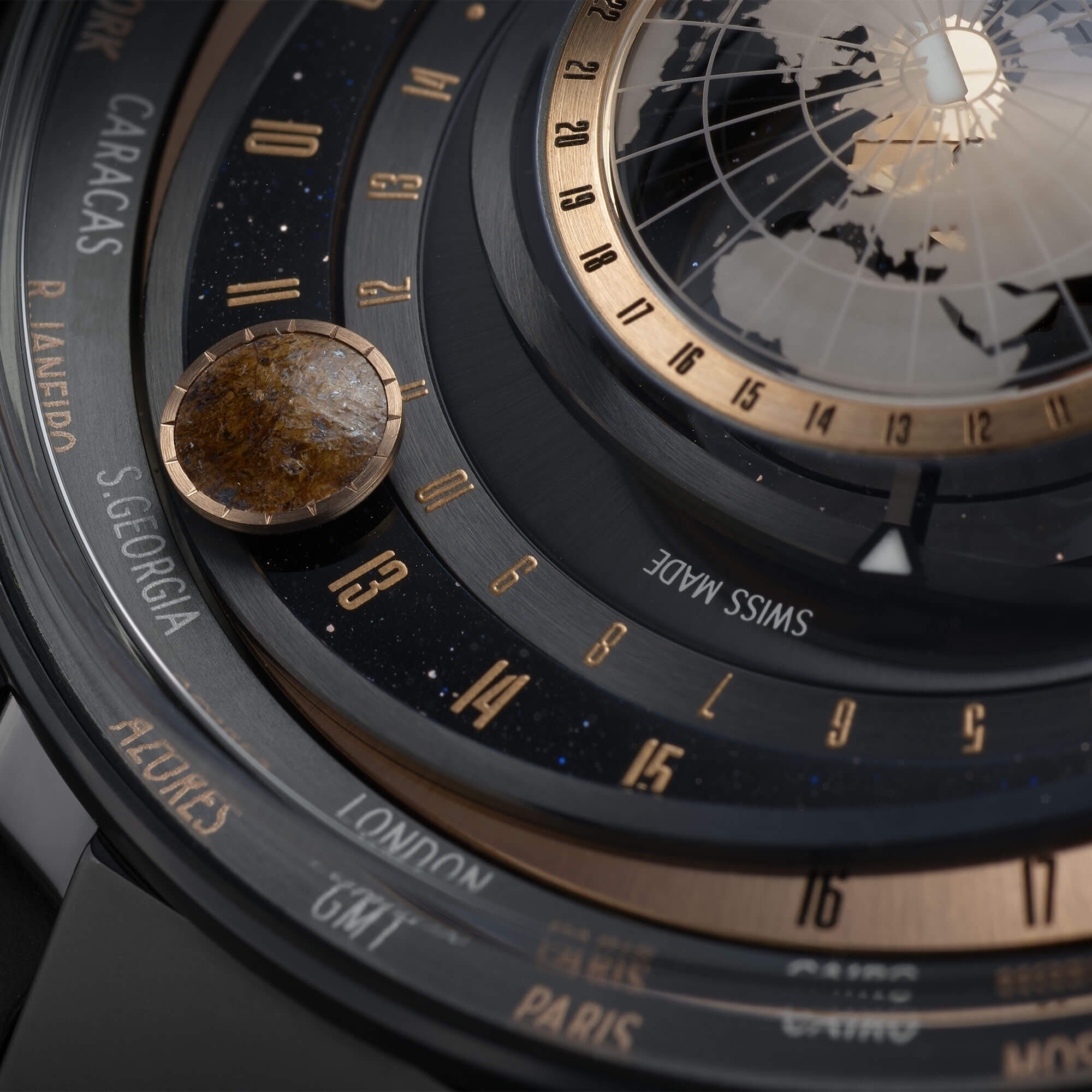 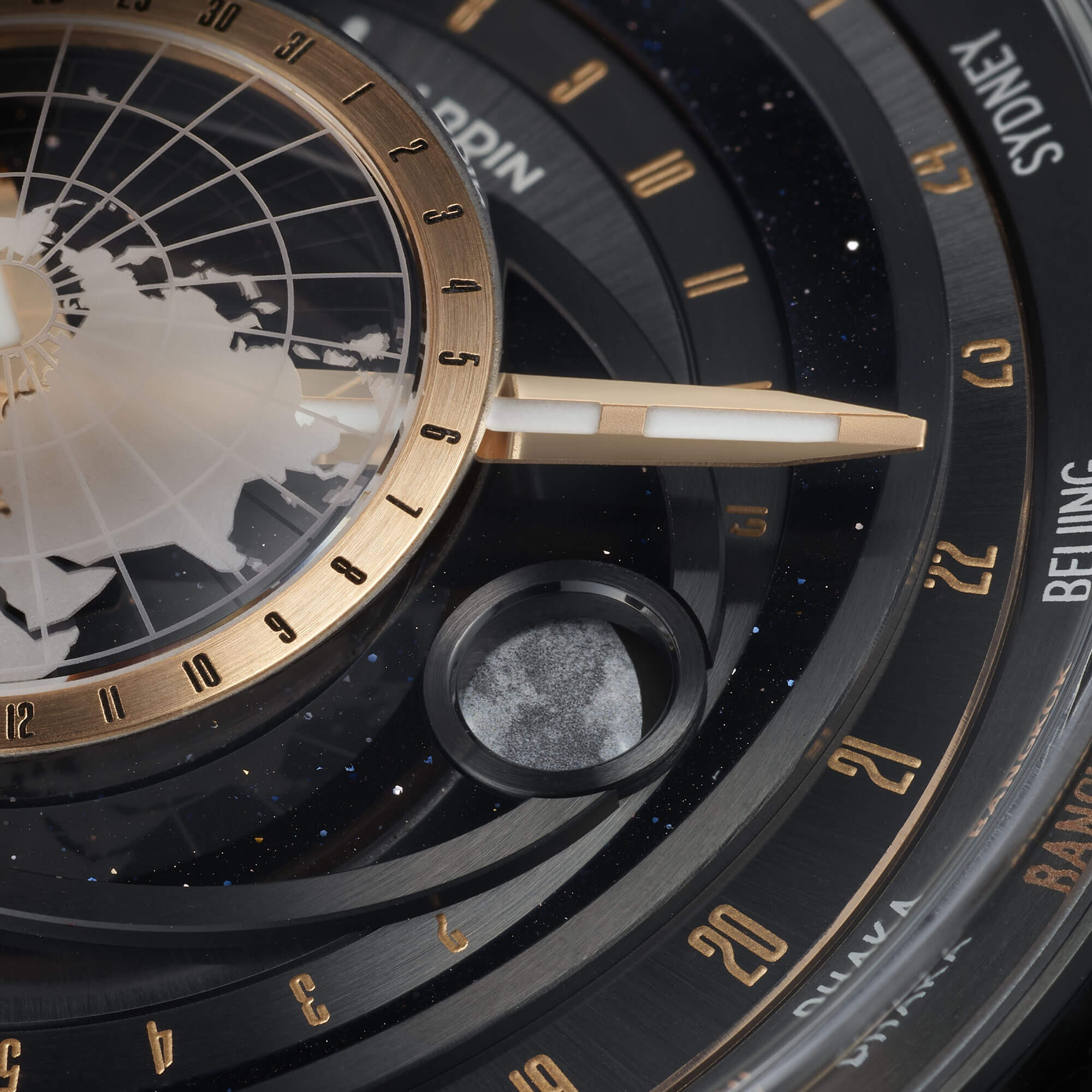 To be complete, the date ring is made of gold.
But the most spectacular part of this dial is the domed sapphire depicting the Earth thanks to engraved areas of land. 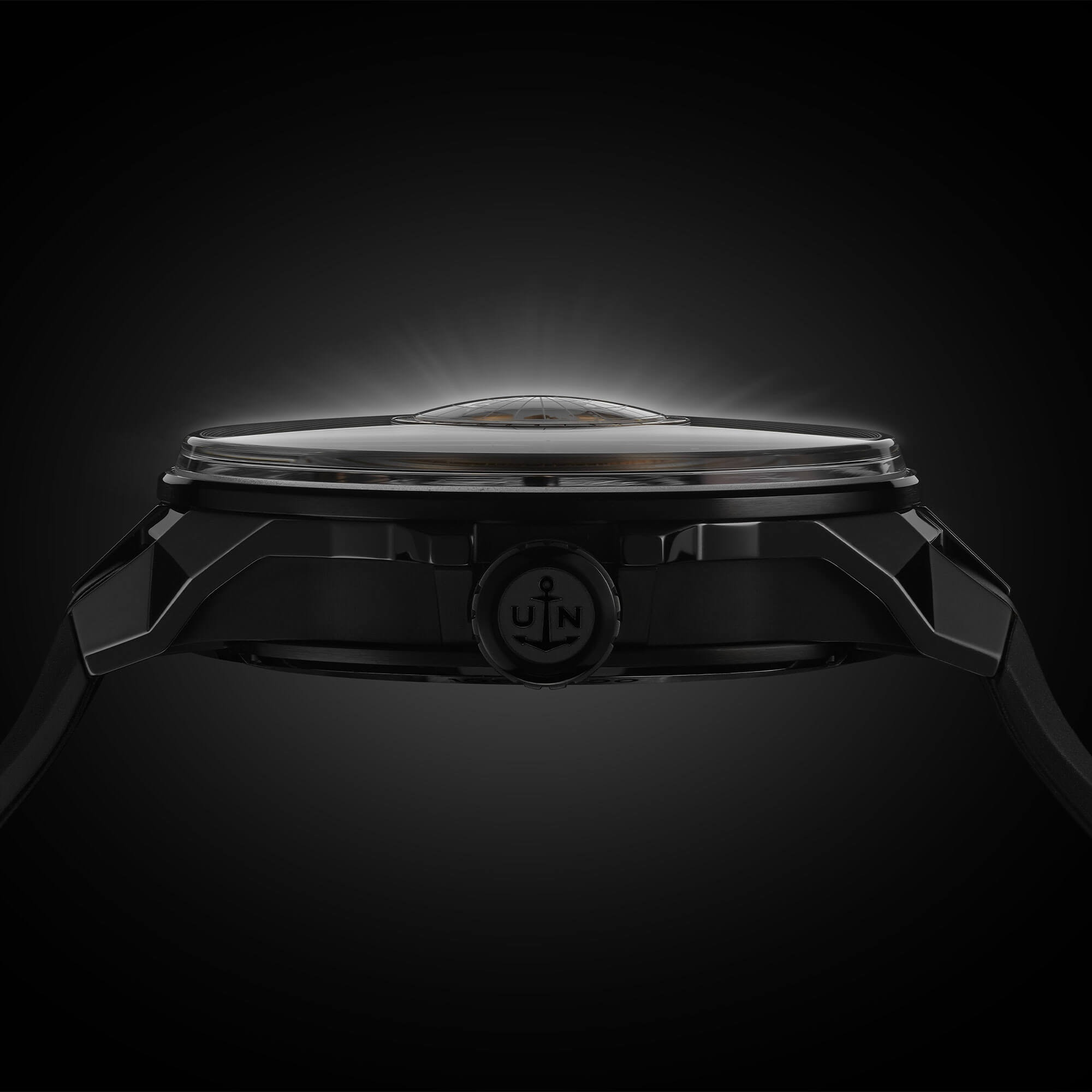 I will not elaborate on the movement, as it is the same as the one animating the former editions, the Cal UN 106, beating at 4 HZ, automatic, and offering a decent power reserve of 50 hours.
I much prefer to elaborate a bit on my feelings about the Blast Moonstruck as a conclusion to this article, with some photos I could take.
To say it straight, it is not a watch I expected to see NOR to please me so much. 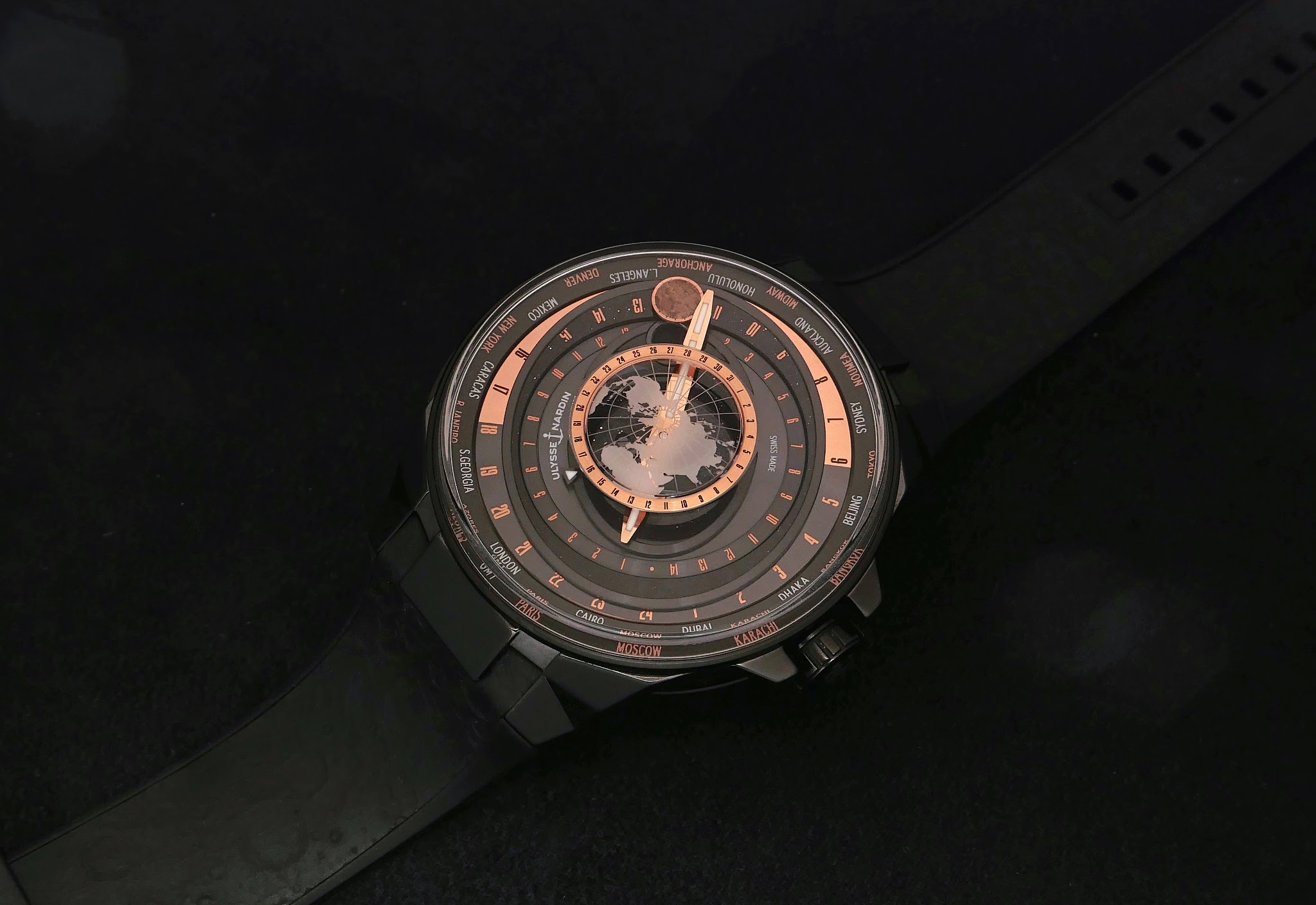 First because even if I had some affection for the former Moonstrucks, the case didn't please me that much, was very heavy in rose gold, even worse in platinum, and it didn't sit very well on my wrist. And I tried hard, as I was totally fascinated by the concept and the astronomic dimension of this watch, without forgetting that it is a world time, too! 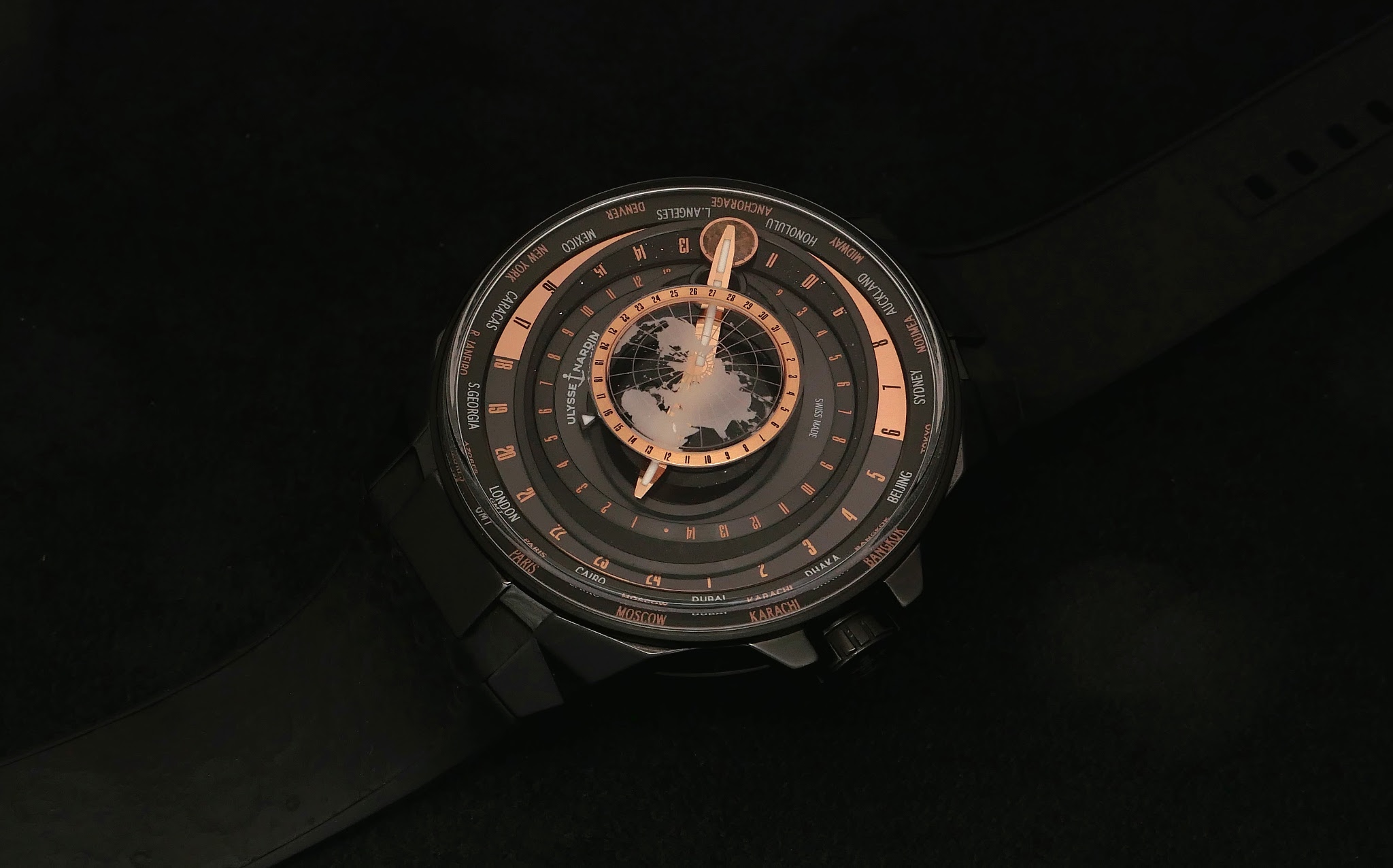 With the Blast Moonstruck, my former reserves disappear. The smaller case, even if it is only one millimeter less, is welcome for my wrist, moreover because the shape of the lugs makes it even more wearable. Well done. Add the ceramic and titanium lightness, and it provides some comfort, in comparison to the heavy noble metals. The surprise comes from the fact that I am not a fan of black cased watches at all... But here it works, mainly because it is very consistent with this sublime dark dial. 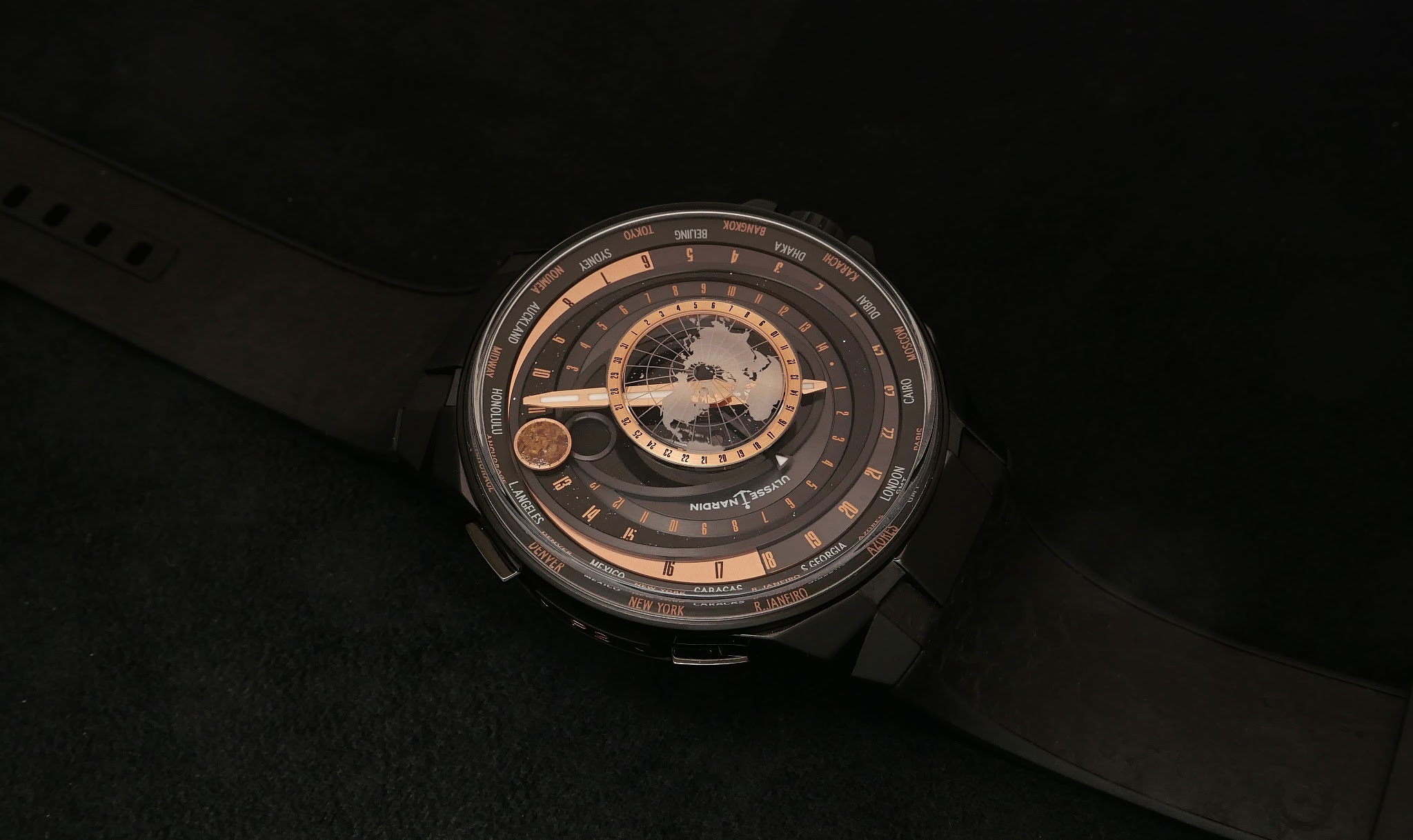 The dial is very much my taste, too. This bubble on the sapphire glass is terrific, the engraved lands are eye catching, as well as the sun. My only regret is that the moon didn't receive the same treatment. Imagine it made in.. Meteorite! 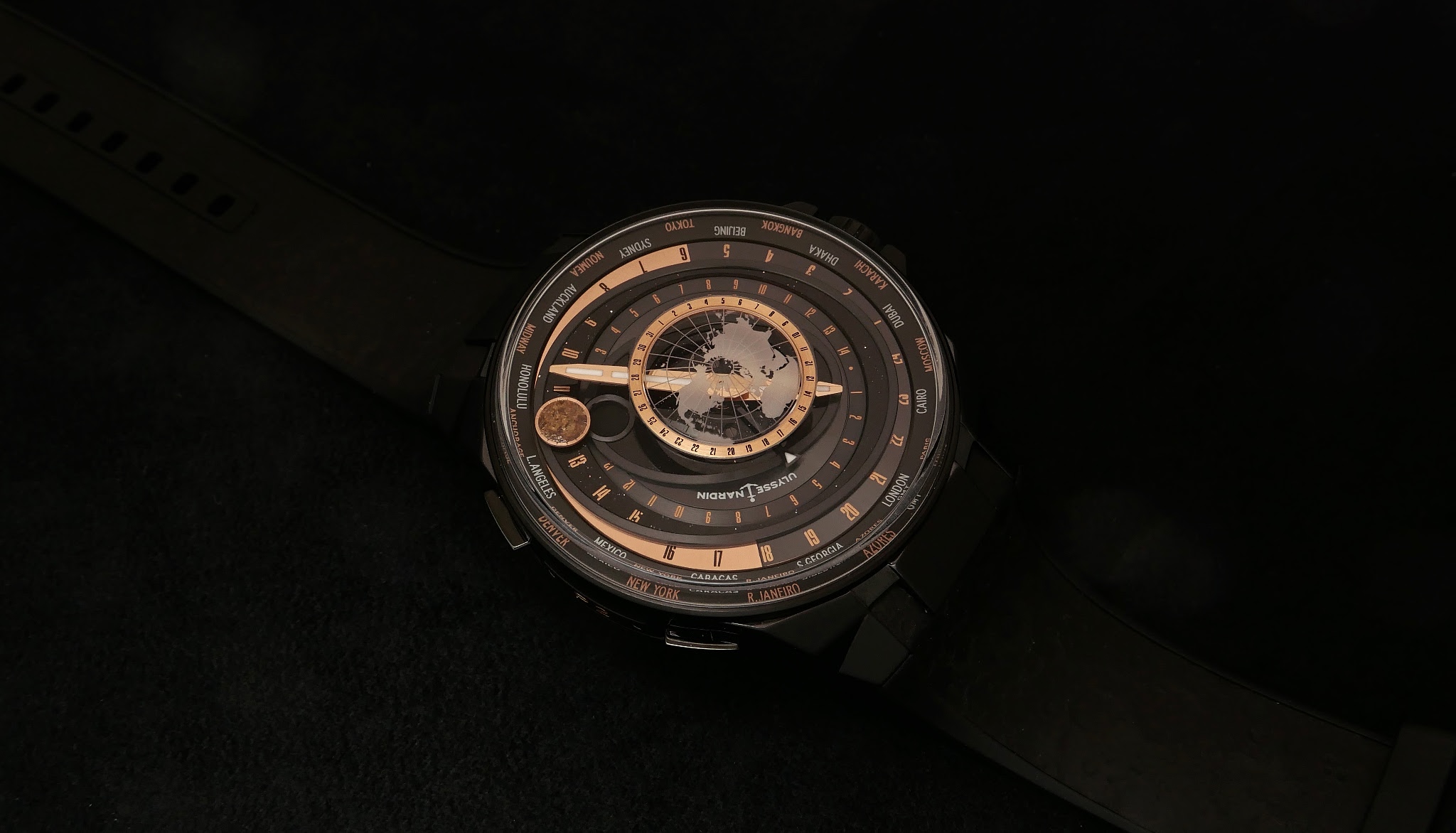 I like it at the point that it is one of the watches which are part of my 2022 Watches and Wonders Edition. It seems that I found MY Moonstruck! 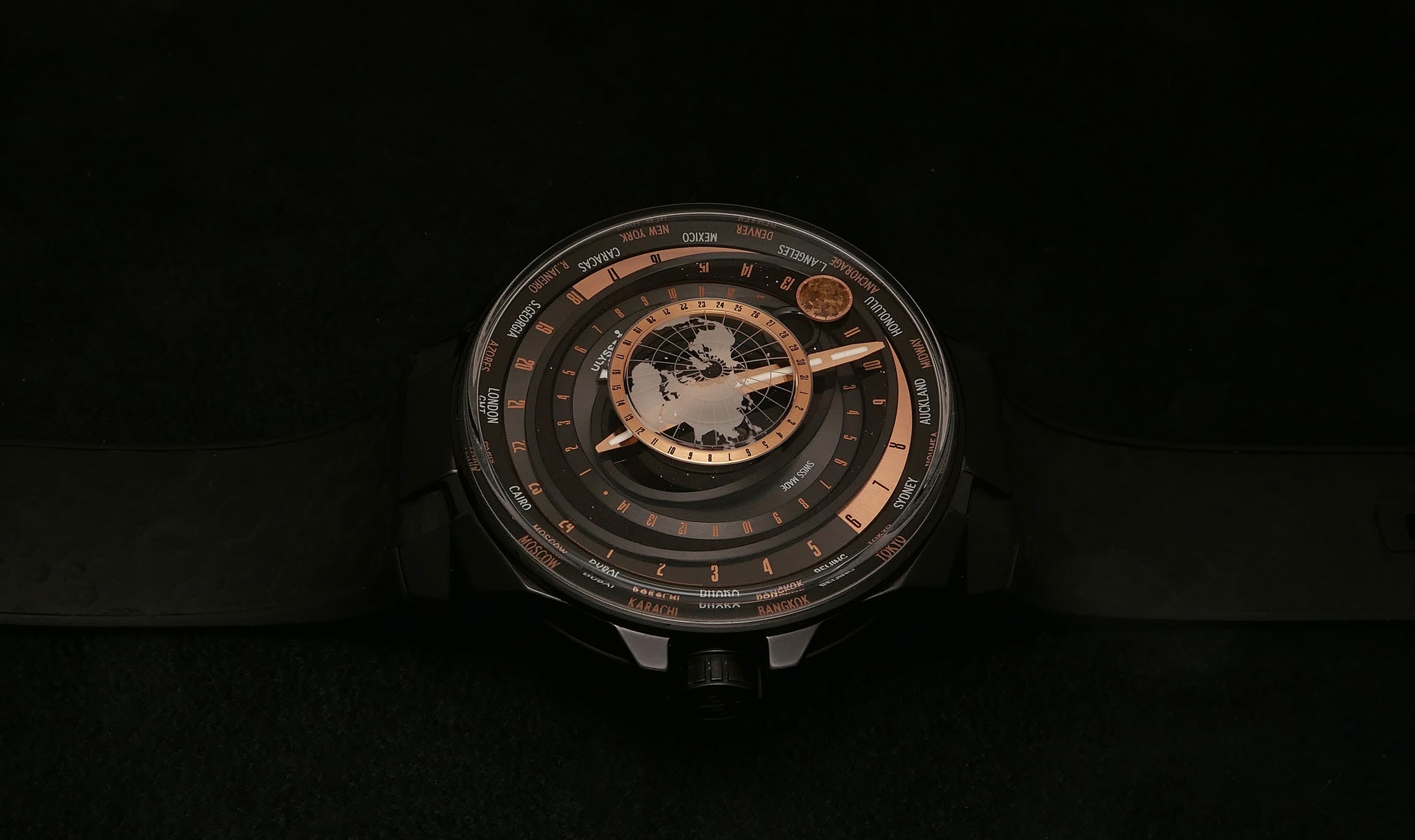 Watches and Wonders 2022: Hands on review on the Ulysse Nardin Blast Moonstruck.

By: amanico : September 20th, 2022-08:58
For 2022, Ulysse Nardin decided to unveil the third opus of the Moonstruck which was born in 2009. First in rose gold, the, a bit later, in platinum: The 2009 Moonstruck was a simpler approach ( simpler in the fact it is less complicated to understand ) o...
login to reply

The concept is cool as always

You are right, it cannot be everyone's taste. I totally agree. Thanks, Andrea.

To my eyes, this is the best looking version of the watch so far.

By: MichaelC : September 20th, 2022-12:45
The angular and conceptual case in black ceramic suits the DNA much better. Thanks for a detailed look at this one!
login to reply

I totally share your enthusiasm on this one. If only I had the means to get it!

Thanks for the review. I am uncertain...

By: Ronald Held : September 20th, 2022-19:36
About what to think of the style. How much does watch and strap weigh? What effort does it take to produce that domed crystal?
login to reply

The feeling is not heavy at all. Domed crystals are always a bit tough to make.

Not heavy is relative. Above..

I can believe that. I never asked...

Much heavier due to the metal!

No doubt. Another set of...

Well, there are some chances you can see one...

That is a good idea. Which PuristS..

Ed I think. Not certain about Mitch. (nt)

This one is a very cerebral watch…

By: mrds : September 20th, 2022-20:16
I do love the concept, and visually I find it captivating too. By far the best iteration of the series. I think the black theme works well for this view from outer space. My main concern is the size. At 45 mm I fear this is no watch I could ever wear. But...
login to reply

Please keep in mind that the lugs are short, which gives you the feeing that it wears smaller in reality.

Hi Nicolas, this piece is very romantic and complicated !

I knew you would ask for some enamel, here. ;)

Wow! Thanks for the great review mon ami!

No, alas, not. I was at the UN Booth, at Watches and Wonders, so the light was not ideal for a wrist shot.