A Pig that does not Fly is just a Pig 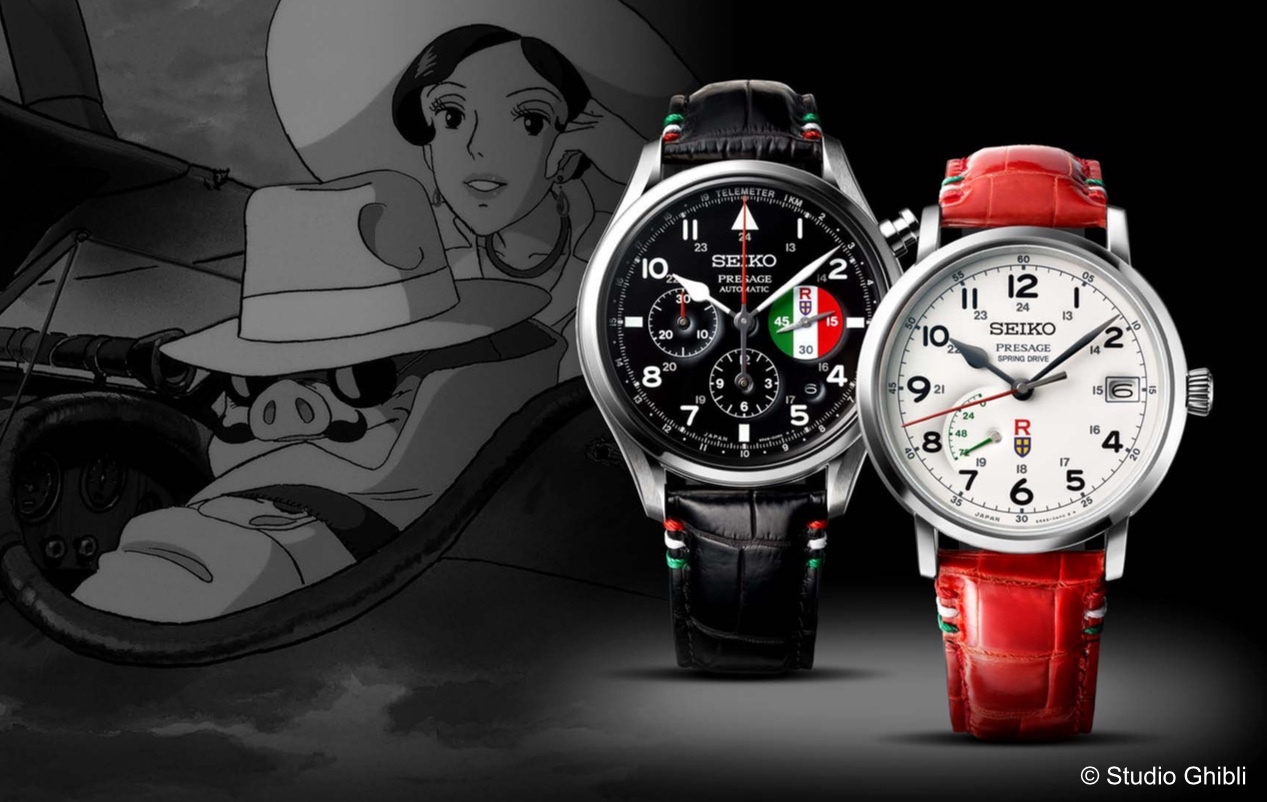 The artistry of traditional Japanese craftsmanship has been a central feature of the Presage collection since its introduction to the world in 2016.
The collection’s wide variety of creations have showcased handcrafts such as Shippo enamel and, most recently, Arita porcelain, which, in combination with Seiko’s watchmaking skills, create a unique balance of beauty and technology. Today, Presage introduces two new watches that reveal a completely different and more contemporary form of Japanese artistry. These timepieces are inspired by the widely acclaimed feature-length film “Porco Rosso,” created by the famous Japanese animation studio, Studio Ghibli. Its creations have won the favor of animation fans worldwide for their creative, other-worldly settings, distinctive visuals and masterful storytelling.
Porco flies over the Adriatic Sea in his aircraft, Savoia S-21 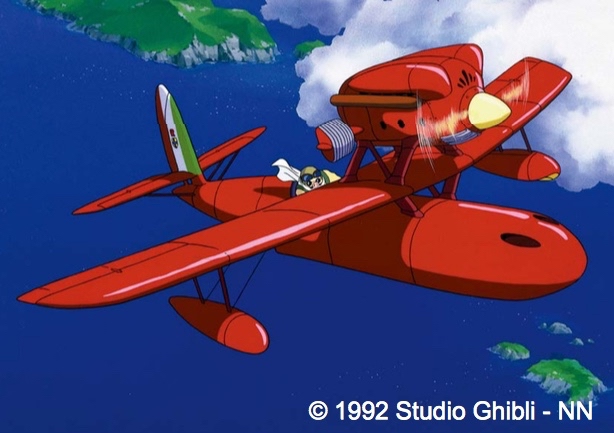 One of these films is “Porco Rosso,” released in 1992. The film features an early 20th century pilot who transforms himself into a seaplane-flying pig, Porco, and makes his living chasing sky bandits over Italy and the beautiful Adriatic Sea. With its vivid animation, the film brings to life the romance of the early days of aviation.
The two watches capture the passion for mechanical engineering and technology that underpin the film and explore the interface between function and design that the film’s director, Hayao Miyazaki, describes through the affectionate way that he depicts Porco’s airplane, Savoia S-21. The watch with the white dial carries Seiko’s innovative Spring Drive movement while the black dial version pays respect to Seiko’s contribution to the history of traditional horology with an automatic chronograph. 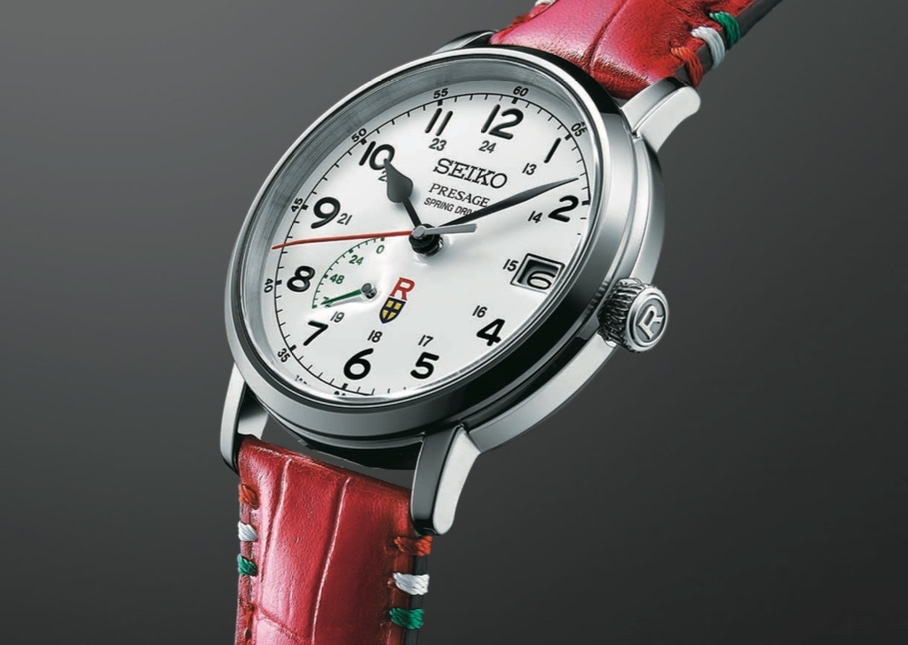 Porco’s plane inspires every aspect of the design
The beauty and individuality of Porco’s fictitious 1920’s plane, Savoia S-21, are reflected in every detail of the watch. The dial takes its inspiration from the instrument panel of the plane with clear, bold hands and numerals as well as detailed and intricate markers. The white and black dials are made of enamel by master craftsman Mitsuru Yokosawa and his colleagues to create the warm beauty that echoes the feel and texture of the materials used in a 1920’s aircraft.
A specially created seconds hand for the black dialed watch reflects the plane’s propeller. 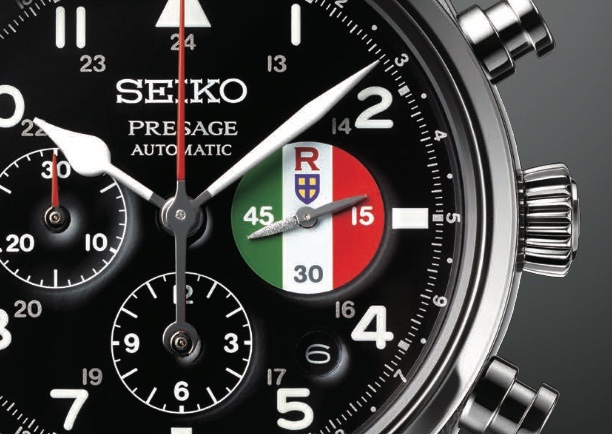 The “R” emblem on the tail of Savoia S-21 is displayed at the six o’clock position of the Spring Drive watch and at three o’clock with the same coloring as the plane’s tail in the automatic chronograph. This coloring is also subtly integrated into the Spring Drive creation with its white dial, red seconds hand and green power reserve indicator.
The crown is specially engraved with the emblem of Porco Rosso and his plane’s name graces the case. 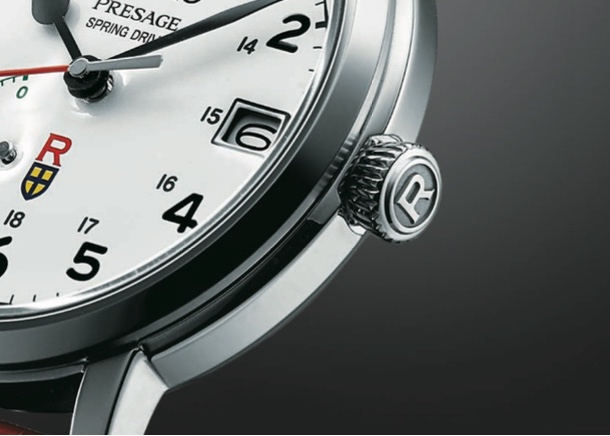 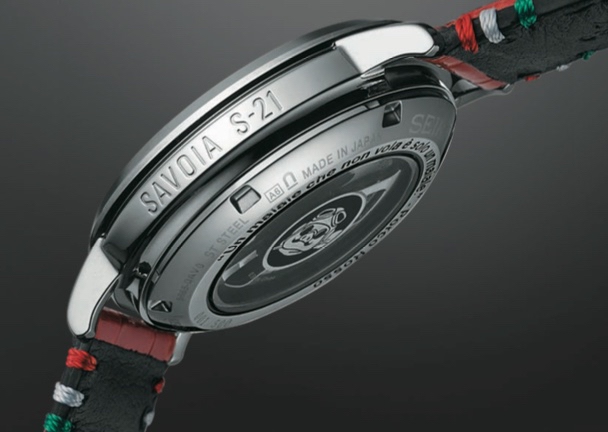 Spring Drive and the automatic chronograph – the cornerstones of Seiko’s watchmaking
The white dialed watch incorporates Spring Drive Caliber 5R65 which has an accuracy of +/–1 second per day and a power reserve of 72 hours. There is a power reserve indicator at the eight o’clock position and a date window at three o’clock.
The automatic chronograph is powered by Seiko’s most advanced chronograph caliber, 8R48, which measures elapsed time up to 12 hours and has a power reserve of 45 hours. In addition to a vertical clutch and a column wheel, it incorporates Seiko’s unique three-pointed hammer and a heart-shaped cam which ensure the perfect and instant synchronization of the hands when the chronograph is reset.
The beauty of the Spring Drive movement is clearly visible through the sapphire crystal case back, as is the Porco Rosso symbol. 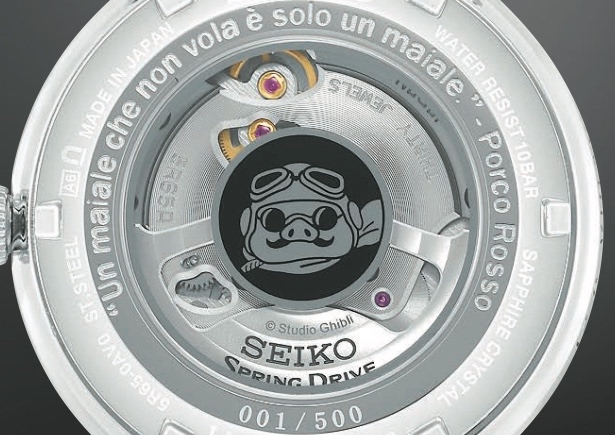 On the case back itself is engraved, in Italian, a famous quote from the film, “A pig that does not fly is just a pig.”
The watches are offered in a special presentation box, each with an alternative strap and a leather cloth that is marked with the symbol of Porco. One strap is in the vibrant red color of the fuselage of Savoia S-21 with stitching in red, white and green, and the other is in black with the same colored stitching.
The special box comes with an alternative strap and carries a message from the film’s director, Hayao Miyazaki. 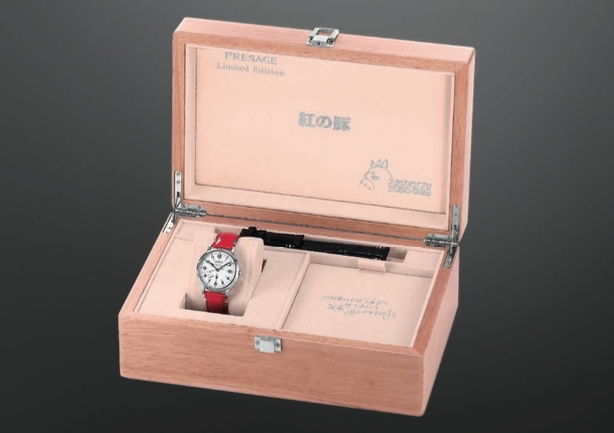 Both watches are available in the Presage collection from June 2020 as limited editions, 500 watches for the Spring Drive version and 600 for the automatic chronograph.

A Pig that does not Fly is just a Pig

By: cazalea : March 5th, 2020-09:23
The artistry of traditional Japanese craftsmanship has been a central feature of the Presage collection since its introduction to the world in 2016. The collection’s wide variety of creations have showcased handcrafts such as Shippo enamel and, most recen...
login to reply

Nice pieces... and quite unusual approach for Seiko I think [nt]

A collaboration between Seiko and Studio Ghibli?

By: Brego : March 5th, 2020-14:04
I would have never seen that coming. What a pleasant surprise. I like the white chronograph with the Spring Drive movement.
login to reply

By: patrick_y : March 5th, 2020-15:41
There will definitely be some Porco fans who will want to adopt this watch right away!
login to reply

Just when I thought I won't buy another one ...

Btw. what are the Ref’s of the two pieces?