Hands on review of the Richard Mille RM35-02 Rafael Nadal

Everyone knows the power of Rafael Nadal's shots, whether on the forehand or backhand sides. So when I learned that the Spanish champion was going to play Roland Garros 2016 to conquer his tenth title on the Paris clay with the RM35-02 on the wrist, I was starting to be worried! But yes, it was the first Richard Mille automatic watch dedicated to Rafael Nadal. So, I wondered if the winding mass would not damage the movement because of an excessive rotation speed after a big topspin shot?

There wasn't any risk. Because that is the main feature of Richard Mille watches. They are designed and made to be worn in very specific conditions, compatible with the use made by the ambassadors of the brand. They use them without constraint and they even tend to be forgotten thanks to their comfort and their lightness. Nadal, for example, plays with his various watches (the RM35-02 was in 2016 the sixth Richard Mille watch dedicated to him). They are certainly worn on the right wrist (Nadal is a left-handed player) but the right arm works a lot and not only when a two-handed backhand is hit. 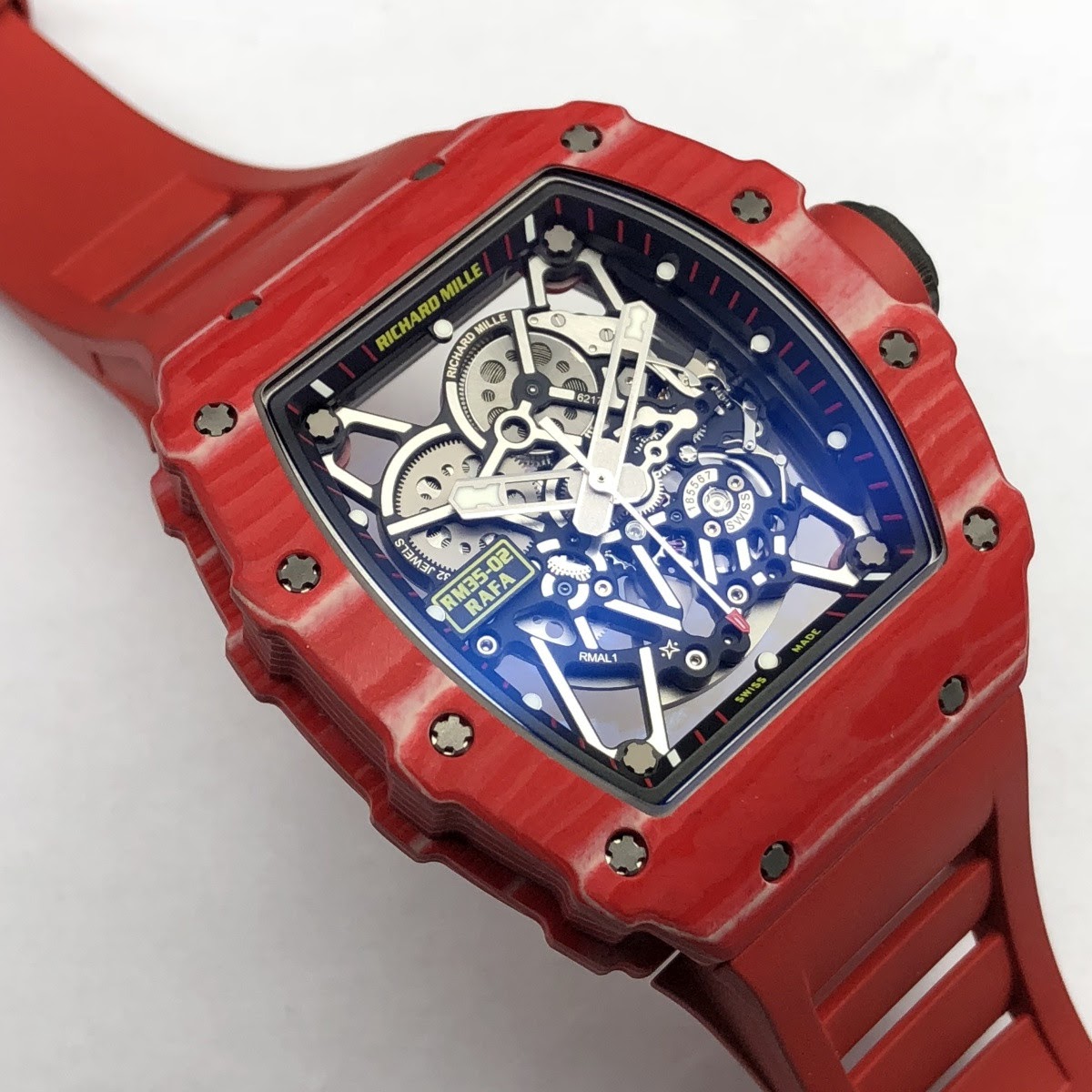 In the end, Nadal did not win his tenth title at Roland Garros in 2016 but he did it the following year with the RM27-03 on the wrist. However, the RM35-02 should not be neglected for this reason. First because Nadal withdrew from the tournament because of a left wrist injury and then because the RM35-02 is a beautiful watch.

For me, it represents a kind of concentrate of the trends implemented in the Richard Mille offer for several years. The first obvious characteristic is the bright color. In fact, the RM35-02 was available in two colors: black and red. But it is the latter that I associate the most with this model. Simply because it was presented with this case color and a yellow rubber strap which obviously was a tribute to the Nadal's nationality.

The watch is not merely red. The case is made of quartz TPT in this version (and carbon NTPT in the black version) which gives a marbled and ribbed appearance of the most beautiful effect. I really like this rendering that I find refined and subtle. But that's not all: the observation of the case side is also interesting because it allows to appreciate the structure of the case made as a kind of mille-feuille whose different layers of quartz TPT are saturated with an exclusive red resin .
The interest of such a material is not only aesthetic. It increases the shock resistance of the case and lighten it considerably. Lightness and resistance, here are the main principles that guided Richard Mille in the creation of watches dedicated to Rafael Nadal. 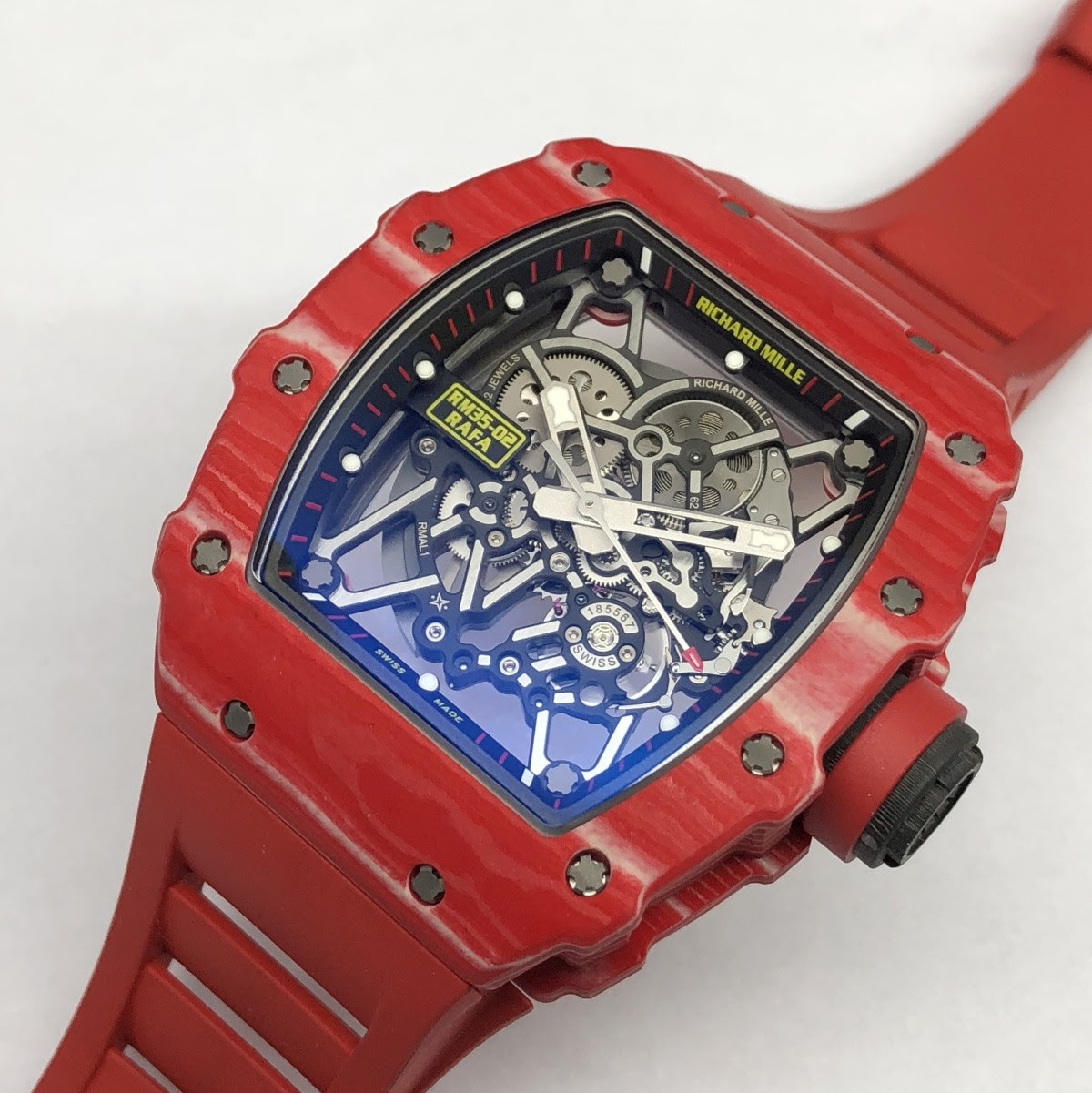 The other important feature of the RM35-02 is the rotor with variable geometry of the RMAL1 movement. By modifying the position of the blades of the winding mass, the watchmaker modifies its inertia and therefore its winding efficiency. It is clear that in the case of Nadal, especially during a game, the watch doesn't need an optimal winding efficiency. So, even if the real impact of this parameter remains little perceptible for the watch owner using it in a normal way, the concept related to this setting is consistent with the context in which the watch is presented (please note that this feature is not exclusive to this watch since several Richard Mille movements offer it). Care to detail as always with Richard Mille.

From a visual point of view, the architecture of the RMAL1 movement is similar to that of the RMUL3 of the RM35-01. I find that the great strength of Richard Mille is to have managed to keep the same rendering, all in depth and transparency whether the caliber is automatic or handwind. It is only by flip over the watch that we really perceive the difference. In this context, the performances of both movements are similar ie a frequency of 4hz for a power reserve of 55 hours.
You can see on this picture the two blades which positions can be modified to change the winding mass inertia: 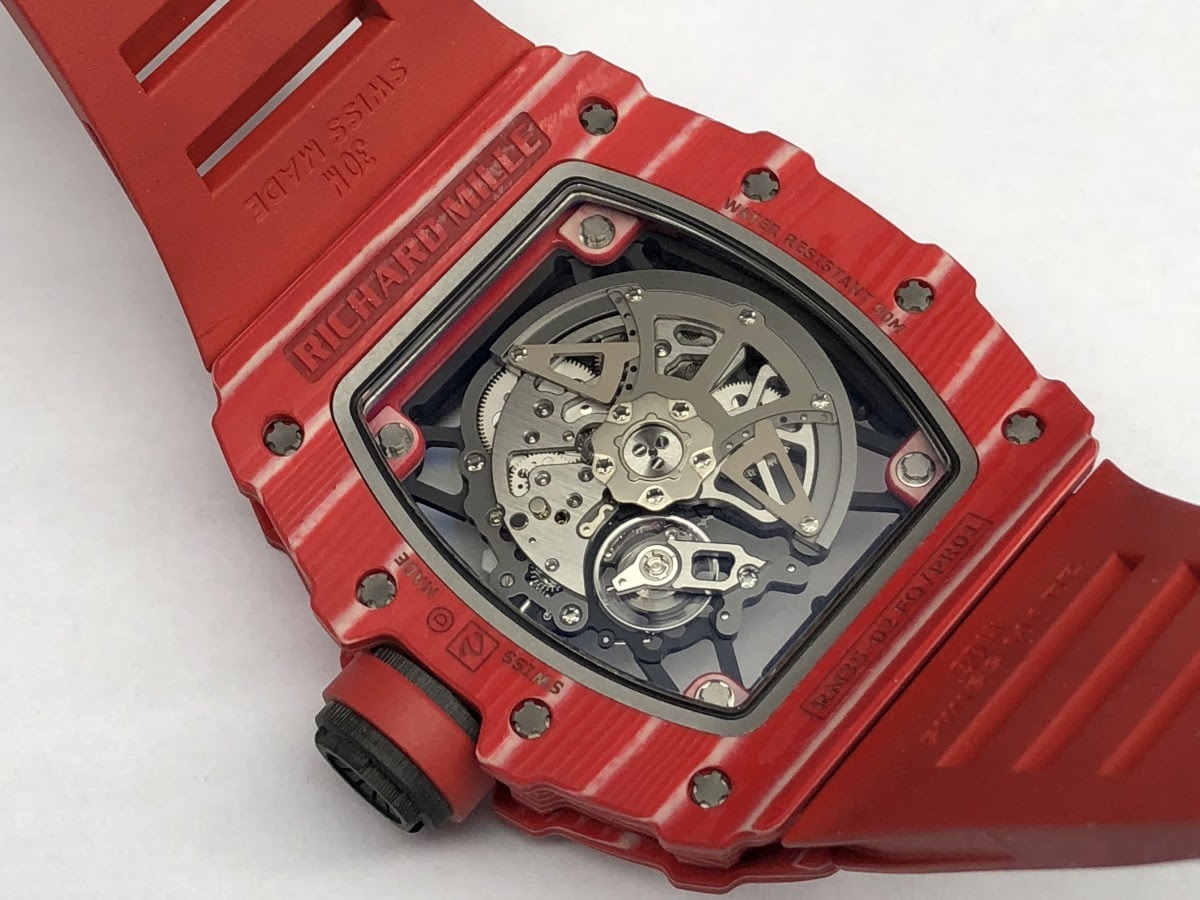 I must admit that I am a fan of the lay-out of the two movements and therefore that of the RMAL1. It seems supported by 4 peripheral V bridges that give a very aerial side. The structure of the titanium movement highlights perfectly the integrated moving elements. I am always amazed by the ability of Richard Mille to insert the barrel and the mainspring into the design, which is generally the most delicate element from an aesthetic point of view. It is actually here a double-barrel which aim is more to optimize the torque than the power reserve. The movement is obviously excellently finished with a contemporary decorative approach consistent with the technical style of the watch.

The comfort on the wrist is the main asset of the RM35-02 Rafael Nadal. I certainly didn't want to reproduce the arms movements of the Spanish champion with a racket in hand (it was safer for the windows around) but as always with Richard Mille, the watch is firmly positioned thanks to the effectiveness of the rubber strap. The lightness of the watch also contributes to this feeling.

At first glance, the red RM35-02 seems more difficult to wear than the black carbon version due to its more daring case color. But the little game of changing the strap color suits it very well. Red, black, orange, yellow, white, everything creats great combo with it. It seems to me as more versatile than it looks. 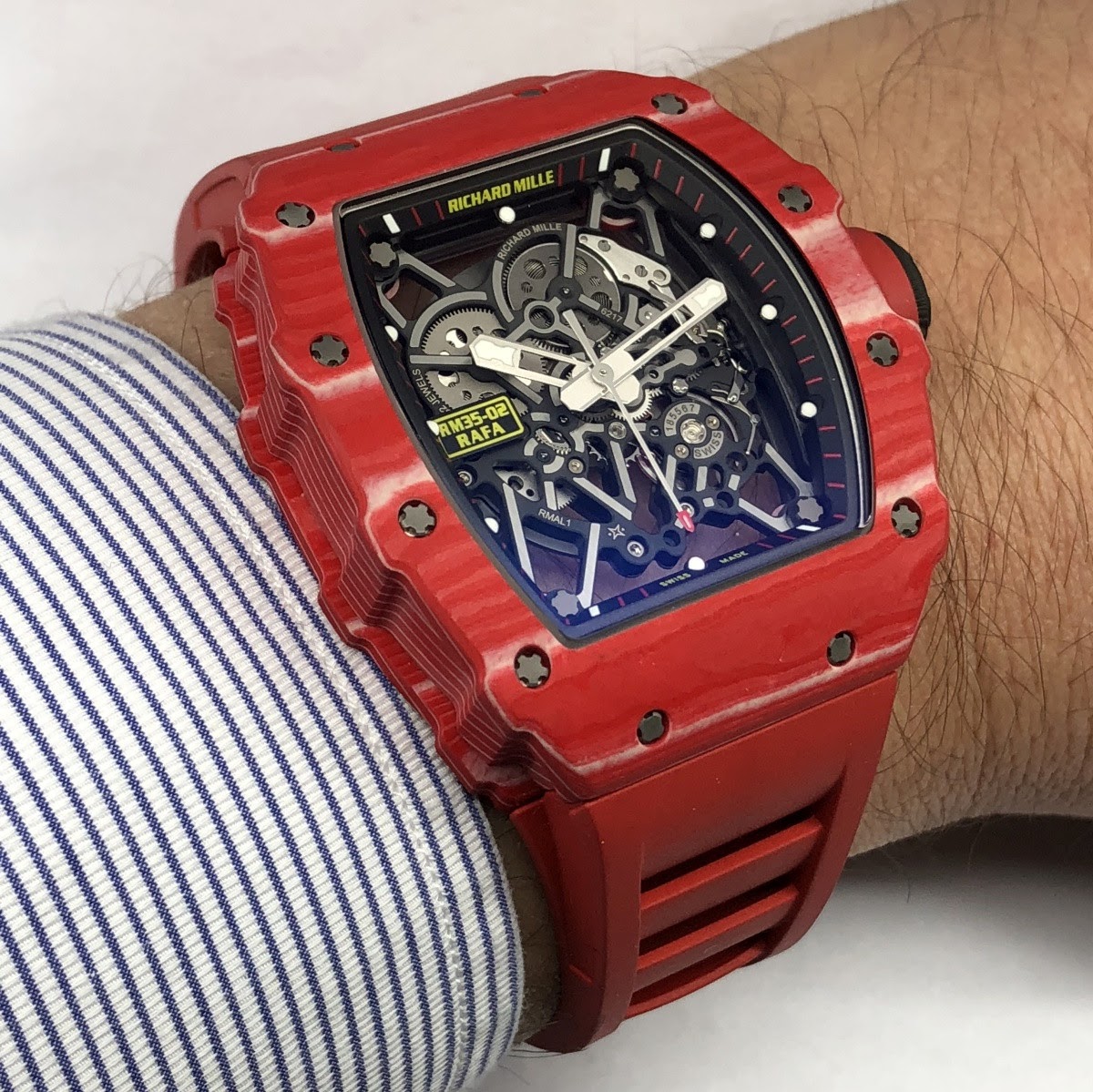 So I really like this RM35-02. The transition to an automatic winding movement is successful and if it didn't cause a great surprise effect considering its similarities with the RM35-01, it is nonetheless a very well designed watch. So, yes, its price is huge for a simple three-hand watch ... if you look at it from the point of view of the functions only. Because its flawless execution, its overall coherence and its performances in terms of resistance and robustness position it on another level. Finally, this RM35-02 was perhaps one of the best news for Nadal during this 2016 season so difficult for him.

Pros:
+ a flawless execution
+ the comfort on the wrist
+ the rendering of the red color of the case
+ a watch more versatile aesthetically speaking than it looks

Cons:
- only a watchmaker can change the geometry of the winding mass
- the price, very high but logical in this quest for exclusivity

Hands on review of the Richard Mille RM35-02 Rafael Nadal

By: foversta : November 4th, 2018-04:27
Everyone knows the power of Rafael Nadal's shots, whether on the forehand or backhand sides. So when I learned that the Spanish champion was going to play Roland Garros 2016 to conquer his tenth title on the Paris clay with the RM35-02 on the wrist, I was...
login to reply

I always wondered how Richard Mille watch could stand such punishment. [nt]

By: PalmSprings : November 4th, 2018-10:40
Does it actually work after a whole tournament? I'm sure he gets a new one every time and they service these ones.
login to reply

It is a beauty

Can someone let me know the Difference between ntpt and tpt quartz? Which cost more to produce? Btw this watch is amazing [nt]

Thanks for the post and I shall be getting mine very soon and your write up helped me a lot in my research.. Iam adding a new black Velcro making it more wearable ... [nt]