Hands on review of the Piaget Polo Skeleton

Since its introduction in 2016, the new Polo collection has gradually found its place in the Piaget catalogue. Its success is growing, driven by the market trend towards steel watches with integrated bracelets. I must admit that I was not fully convinced by the first models. I found them too consensual, symbolizing a kind of global luxury defined to seduce a formatted clientele, whether based in Paris, New York or Beijing. Despite the shape of the case, the very quiet approach seemed to me to be far from the vision I have of the Piaget brand, which for me is synonymous with audacity and sophisticated dials featuring colours or precious or semi-precious stones with mastery and talent. The following declinations were more convincing and I already appreciated much more the Polo with green dial presented at the SIHH 2019. Piaget was at that time quite a precursor as the green fashion was not as marked as this year. However, despite this progress, I felt that this collection was still missing a real spearhead. I believe that Piaget has found it with the Polo Skeleton. 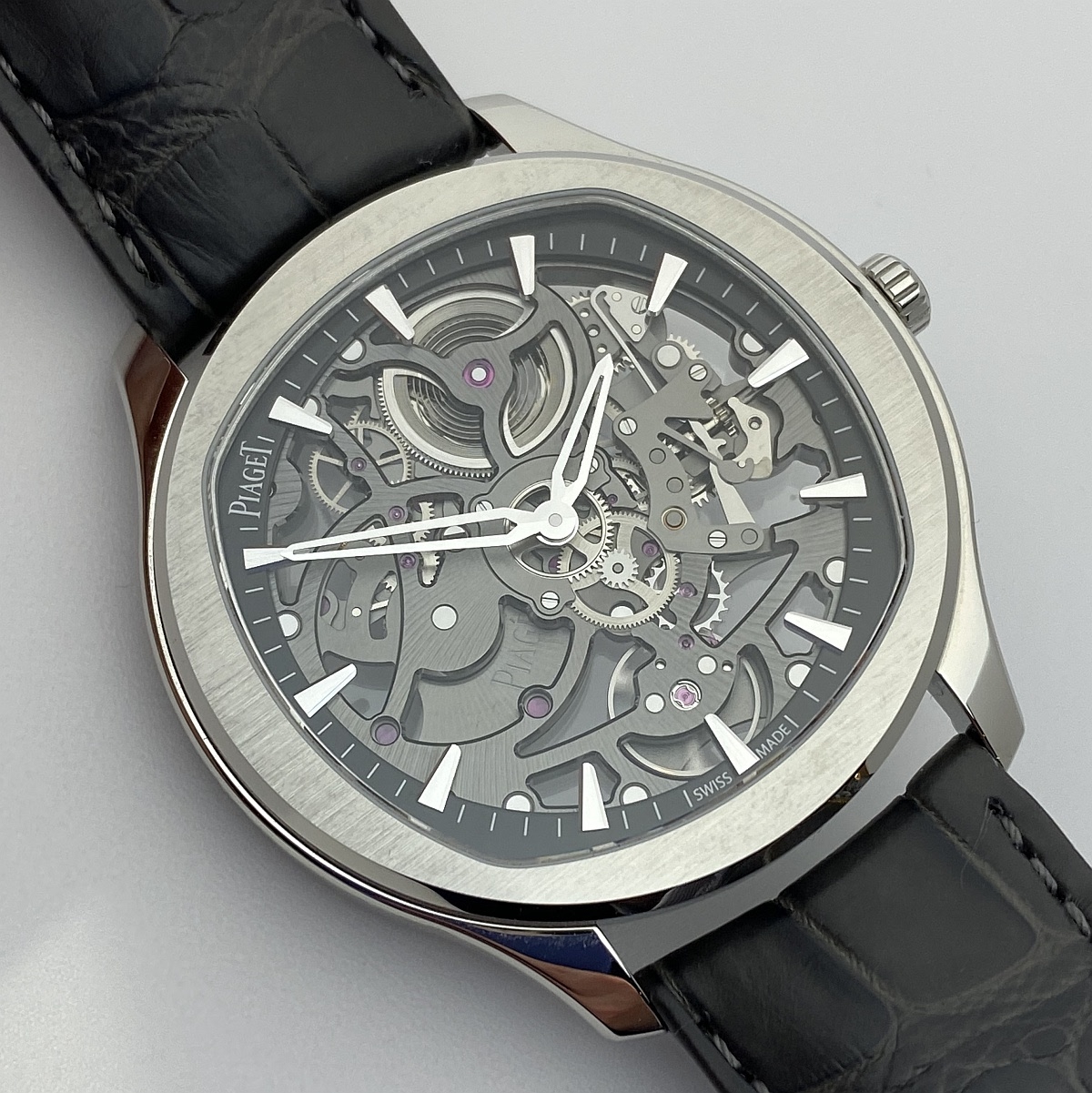 In fact, this watch is very successful because it is unmistakably very "Piaget", being contemporary while building on the traditional strengths of the brand. Unlike the Polo watches of yesteryear, which had a very geometric design with horizontal lines running across the dial and continuing onto the strap, the Polo Skeleton uses two other specialities of the Manufacture: the thineness of the cases and the skeletonisation of the movements. It is this combination of skills that makes the Polo Skeleton more daring and more appealing.

It must be said that Piaget has real expertise in this area. For many years, the catalogue has offered fine watches with skeletonised movements in cases of various shapes. I am thinking in particular of the Emperador or the Altiplano. And in the context of the latter, Piaget has developed impressively slender movements based on a particular architecture where the case and the calibre plate are one. 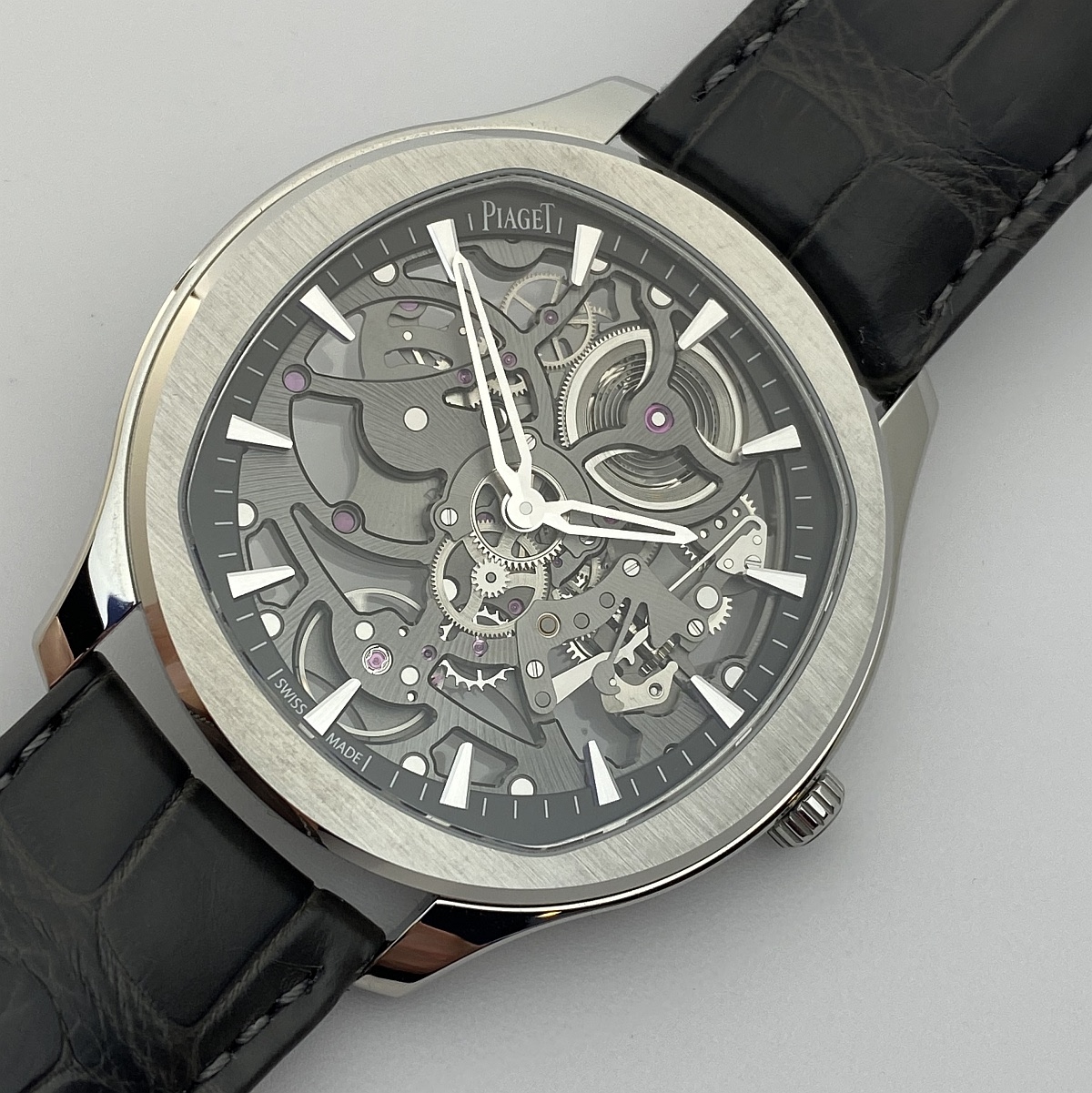 
The two versions of the Polo Skeleton Steel: 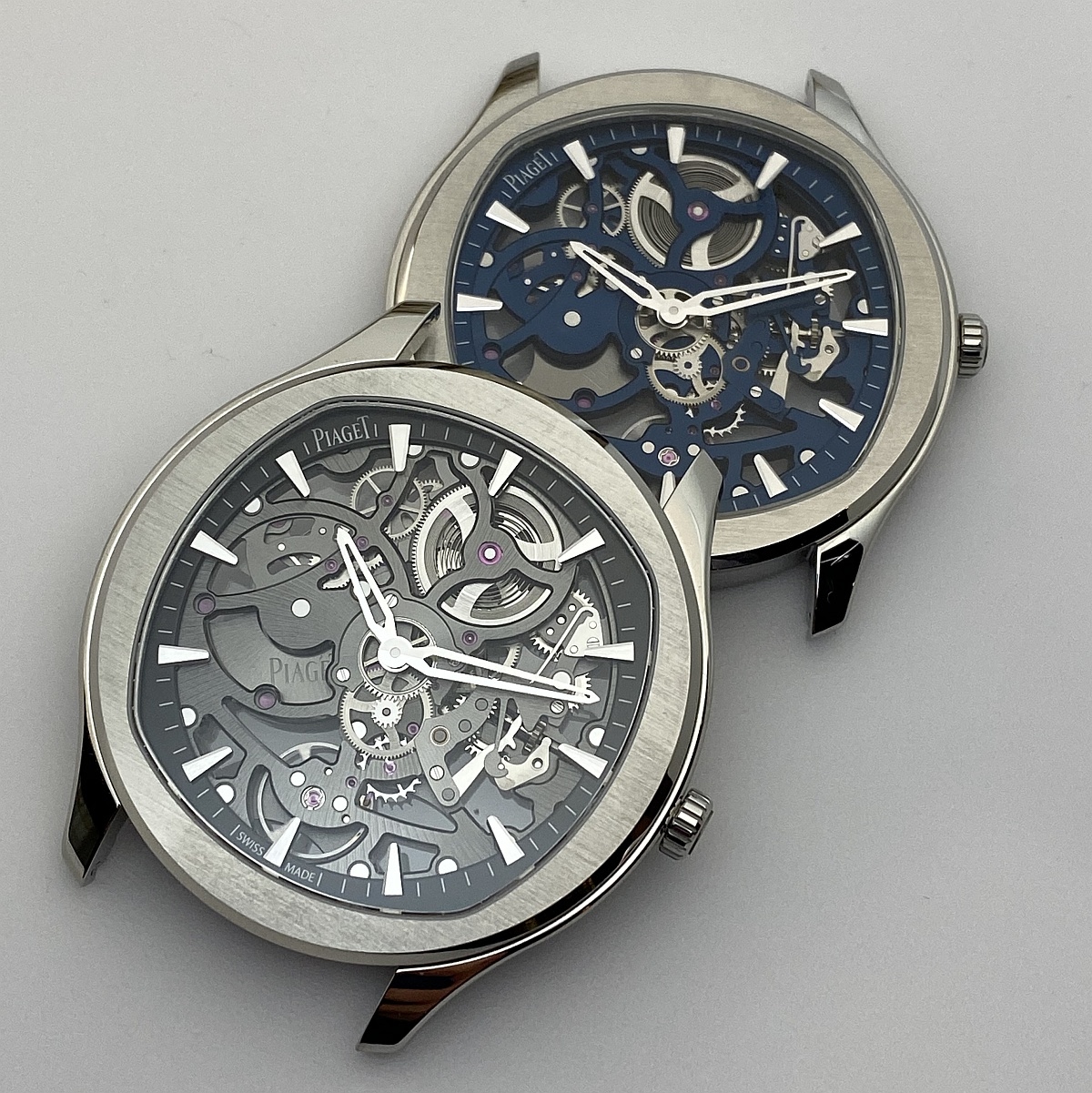 Of course, it is the work done on the 1200S1 Skeleton movement that contributes most to the success of this model. This is not a calibre developed for the occasion, as the 1200S calibre has existed for many years and has been used on several occasions (including in gem-set versions) with the Altiplano. It remains one of the flattest skeleton movements in the world (2.4mm high) and fits perfectly in the context of the Polo. The designers have worked very well on this adaptation, notably thanks to the shape of the bezel and the flange. When you look at the outer contour of the case, it appears to be round. But it is the inner contour of the bezel that makes the difference. It draws a rounded cushion that finally takes precedence visually over the actual shape of the case. Once put on the wrist, the watch seems to be cushion-shaped and not round. The bezel in any case has been refined, the dial opening is enlarged, the peripheral flange has been carefully adjusted and it creates a perfect transition between the calibre and the case. This is how the round 1200S movement is used in a frame that seems to have been made especially for it.

The quick-change system of the strap is a real asset: 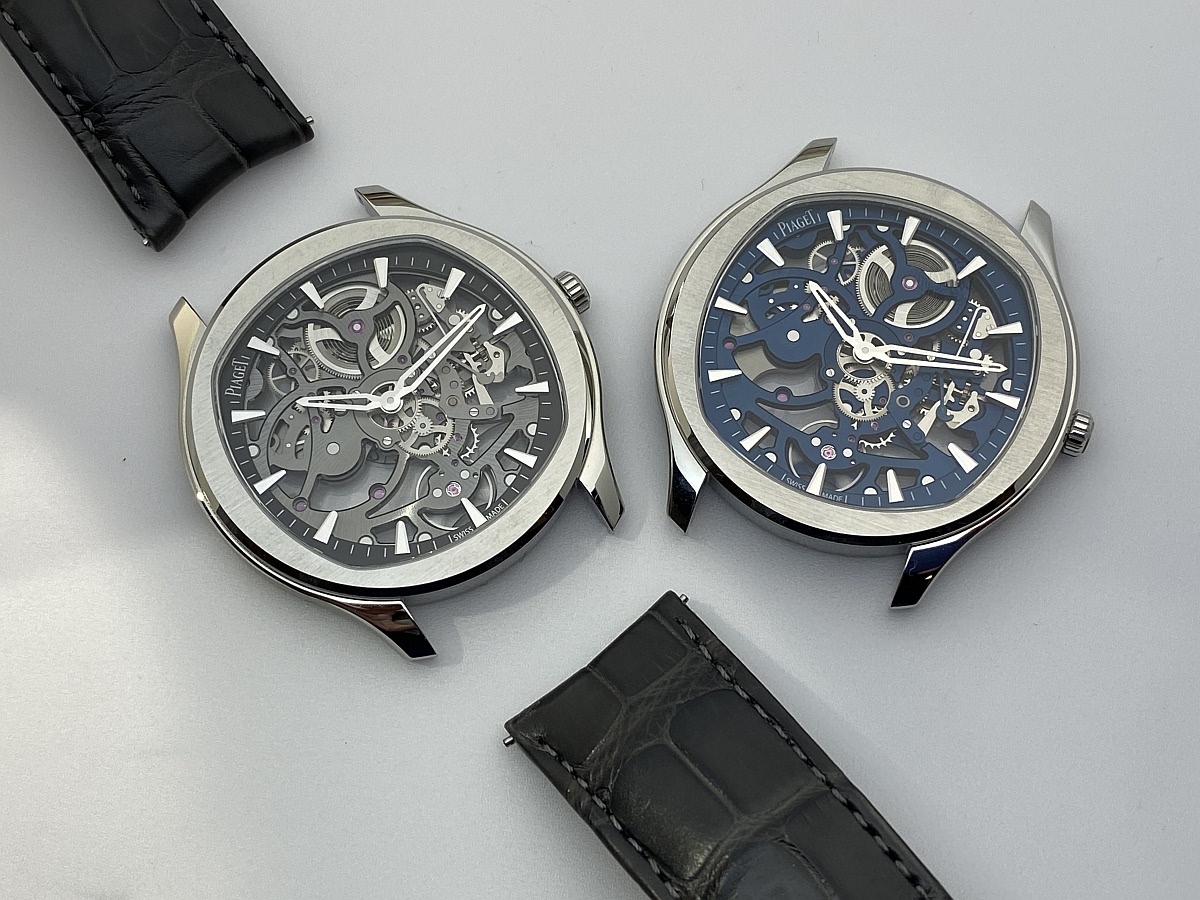 Even more than the finishes, it is the architecture of the movement that is appealing. It offers two main animations: the constant oscillations of the balance at 6 o'clock and the rotation of the micro-rotor at 9 o'clock according to the movements of the wrist. The 1200S movement offers, despite its thinness, very beautiful relief effects. Its aesthetic approach is contemporary and technical and even the barrel is efficiently integrated, which is never easy.  The openings remain discreet and when the watch is worn, the skin is hardly visible which is a very good point. I also appreciate the fact that there is no empty zone. In its steel version, the Polo Skeleton is available with two types of finishing: grey or blue (the movement of the Polo Skeleton has a precise reference 1200S1 to take into account the Polo's own finishing). In both cases, the finishing has been carefully done with nice contrasts between the moving parts and the sunray satin bridges and plate. The bevels are very clean and the whole breathes coherence and rigour in the execution. The name of the brand can be found in two discreet places on the dial side: on the flange between 10 and 11 o'clock and on the micro-rotor, but it is hardly perceptible. These are wise choices that avoid an inscription on the glass for example.

The back of the movement: 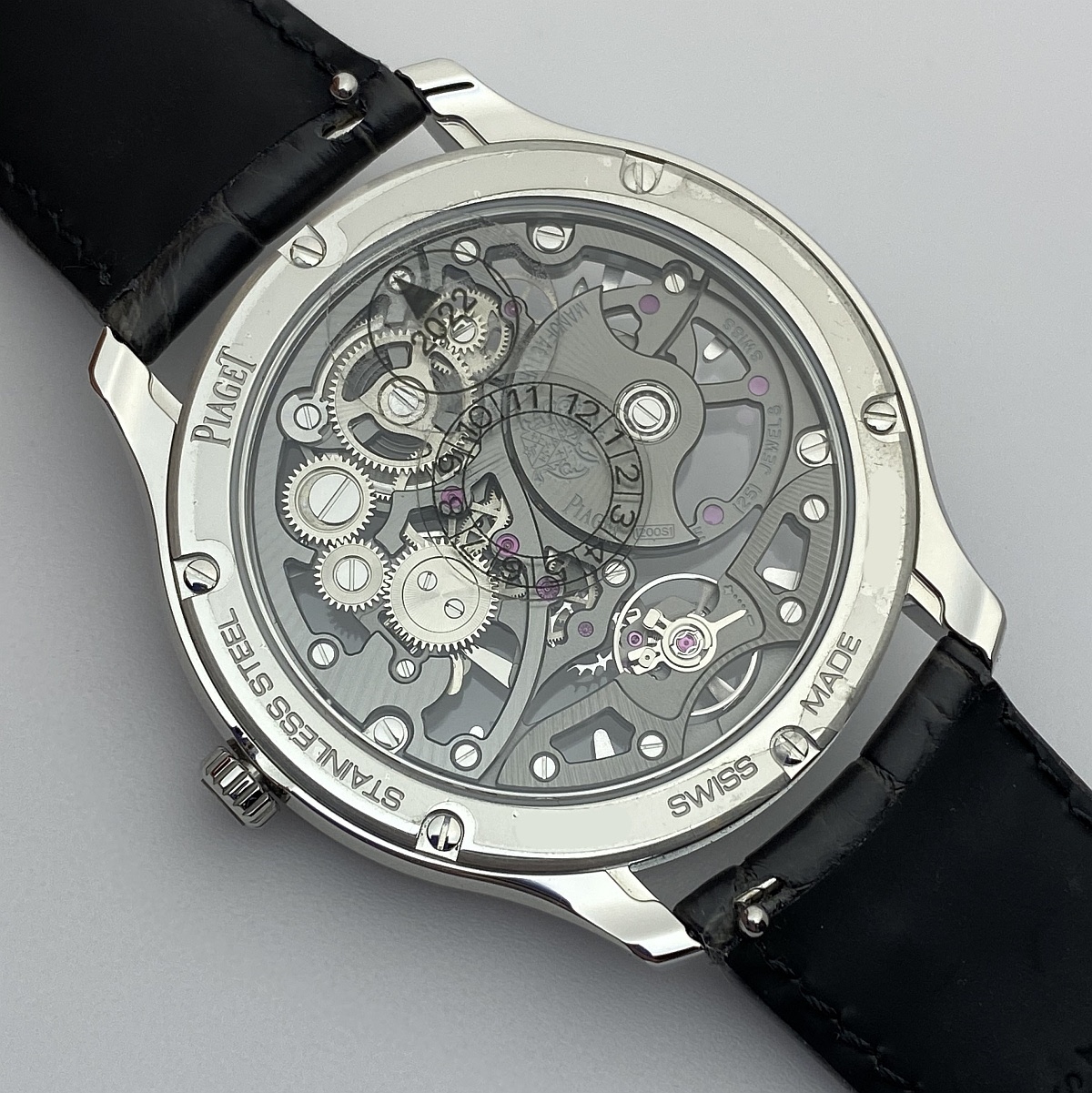 The grey finish is the most elegant and refined. In fact, the grey Polo Skeketon was my basic preference. It is without doubt the most subtle. However, the contrast between the hollowed out hands and the skeletonized movement is insufficient in certain light conditions and the readability suffers which is a pity. On the other hand, the blue Polo Skeleton is more readable and benefits from the more vivid and dynamic finish. I regret however that with the blue version the micro-rotor has the same grey colour. In the end, I would have a hard time choosing between the two. My tastes lead me to the grey one, reason directs me to the blue one... But I start from the principle that this type of watch provides above all pleasure linked to the observation of the fine mechanics in operation and by orienting the wrist correctly, the hands are more clearly distinguished. So, it all depends on what you are looking for. If the practical and utilitarian dimension is the priority, then the choice should be for the blue.

The back of the movement is decorated to the same high standard as the front. The micro-rotor is clearly visible and I like the treatment of the crown wheel and the ratchet. In any case, the performances of the movement are satisfactory with a power reserve of 44 hours for a frequency of 3hz. The efficiency of the winding is quite correct for a micro-rotor calibre, the advantage of the latter being to offer a full view on the movement which is very pleasant. 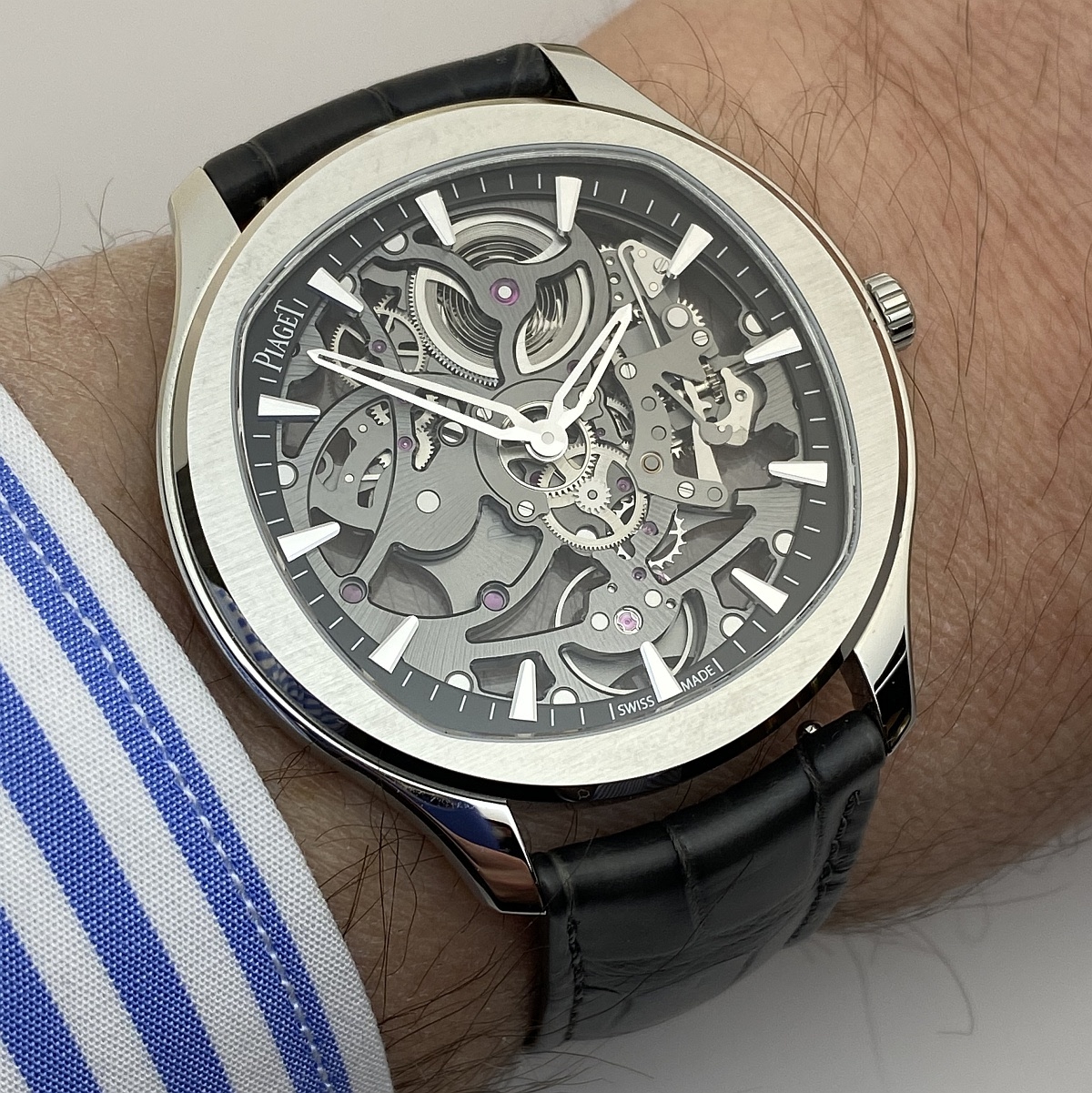 The Polo Skeleton is also convincing in use. Its slender style and the short, curved lugs allow the watch to fit well on the wrist. Thus, despite the large diameter, the Polo Skeleton fits modestly sized wrists. Beware, however: given the opening of the dial, its perceived size is greater than that of the Polo Automatic Date.  In addition, it offers a quick strap change system which allows to vary the pleasures and to transform the look of the watch. In a few seconds, the metal strap can be removed and replaced by a leather strap. To do this, you just have to press the two small pins next to the lugs. However, the Polo Skeleton retains the same appeal regardless of the type of strap, which is proof of its successful design. 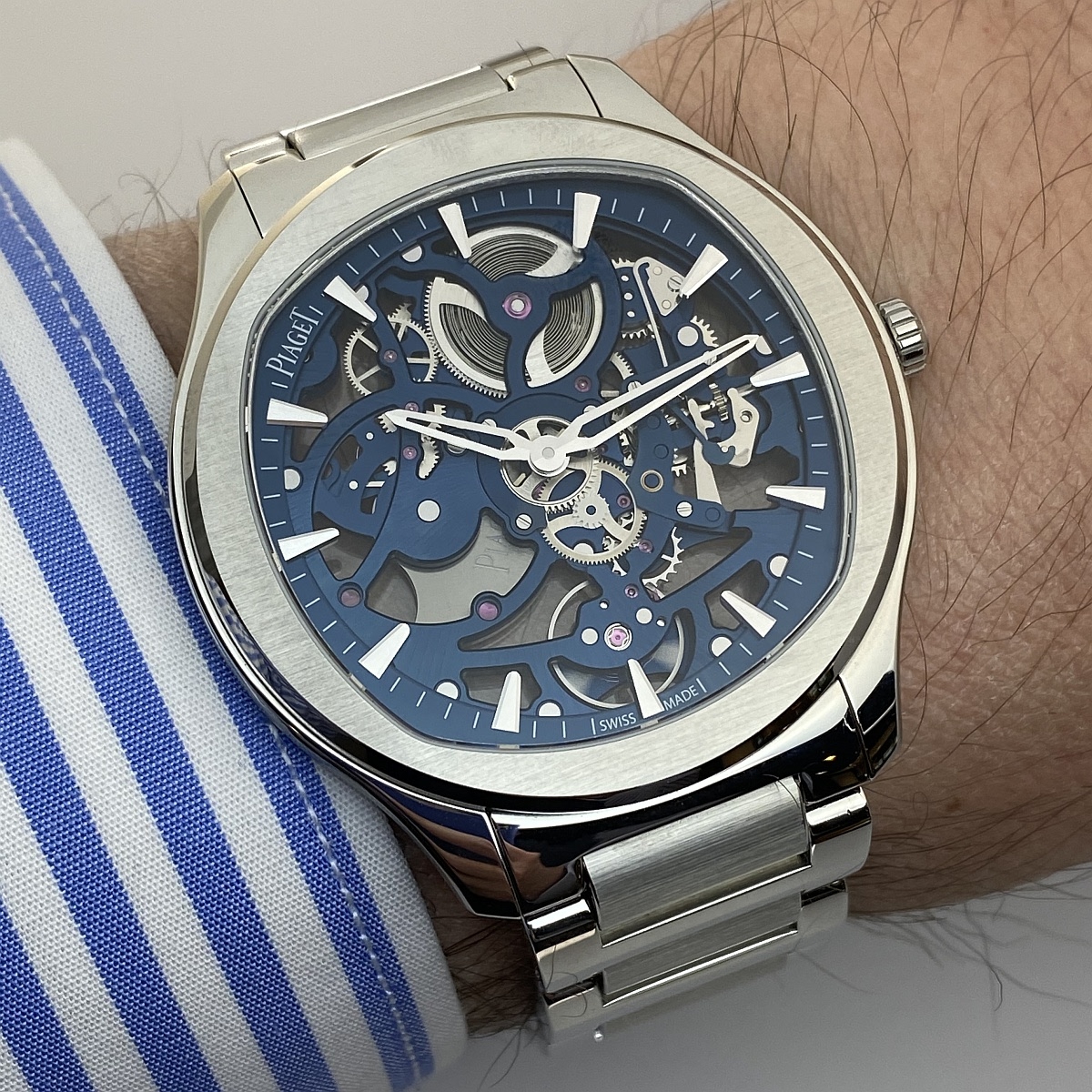 The Polo Skeleton in steel is sold at a price of 29,400 euros in France regardless of the version. The price seemed to me to be well positioned considering the work on the movement, the attractive design and the strap/bracelet changing system. The price difference is however significant compared to the Polo Automatic (between 10.800 and 13.200 euros depending on the version) or even to the chronograph (around 15.000 euros) but it is clearly not the same level of execution. The Polo Skeleton is on a higher level both from a technical and aesthetic point of view. It is in any case the most beautiful Polo today and I sincerely think that Piaget needed such a release. The Manufacture now has a flagship piece in its collection that more clearly embodies the spirit of Piaget and showcases its capabilities. For this reason, I am sure that this watch will have a positive impact not only on the Polo collection but also on the entire catalogue.

Note that Piaget has just unveiled at the Watches & Wonders 2021 digital event a rose gold version with the blue finish of the movement.

+ the more slender and refined style

+ the presentation of the movement

+ the general quality of the execution

+ the ability to quickly change the strap/bracelet

- the legibility, especially with the grey version in certain light conditions

- the colour of the micro-rotor on the blue version

Hands on review of the Piaget Polo Skeleton

By: foversta : April 13th, 2021-13:38
Since its introduction in 2016, the new Polo collection has gradually found its place in the Piaget catalogue. Its success is growing, driven by the market trend towards steel watches with integrated bracelets. I must admit that I was not fully convinced ...
login to reply

beautiful! as an owner of two micro-rotored automatic watches, I'm a sucker for this type

By: DouglasM : April 13th, 2021-13:49
I think Piaget really stepped up and hit a home run with this design and using this movement.
login to reply

Yes I agree. Thanks Douglas.

Not a fan of this line, but here, with the Skeleton versions, the watch is transfigured.

Great review. I prefer my watches a bit thicker but I like the dial design of the open work on this one

This Piaget Polo Skeleton is in my wish list !

By: jrwong23 : April 13th, 2021-16:53
Thanks for the superb review and pics Fx. Like you I'm torn between the blue and the grey. Will take a look at the rose gold version and consider it. I'm more into the Polo skeleton case and movement than the bracelet. I think it looks nicer on a strap. C...
login to reply

What a fantastic review! As an owner of the (seemingly unloved) Polo S (blue) I may be biased but while I've always appreciated skeletonized dials yet I've never liked the readability of them

By: InDebtButOnTime : April 13th, 2021-17:38
and also the fact that many allow too much view of skin and hairs! This may be my favorite skelstonized watch. To me the blue version is super fine. 1, it's very legible and 2, it's BLUE! Great post!
login to reply

The grey skeleton model is gorgeous!