May 22, 2020,05:17 AM
Hello to the all members of WatchProSite!
My name is Tsoroev Rashid, i'am 23 years old watchmaker from Russia. I started my watchmaking way when i was 15. When i firstly came in the fine watches shop i was very impressed and immediatly understand what i must to do. Since then I never stopped to interest in watches. At the beginning I was exploring watches through magazines and internet, then, after 10-12 months, interest for movements was came. I started to buy and collect old pocket watches and wrist watches and disassemble and assemble them and sometimes, when I was have tools, I tried to repair them.
After four years of intensive exploring watches I decided to make my first watch and it was a school watch. I never was making watches before and I decided to start from something simple. I created my school watch in 4.5 months, it took a long time because I’ am a student and I was have possibility to work on it only at holidays. In process of making this watch I realized how to work with material. Because all elements for school watch I was made entirely by hand, like case, lugs, dial, hands and buckle, process of making this parts was quite hard because i was don’ t have a special tools for that, like machining equipment, even some fine files, polishing materials etc. But I said to myself if I started that I must to finish that and I must to finish it anyway. I showed my school watch to some famous watchmakers in Russia and to my pleasure it was have a good feedback. After that I’ am realized that I must to produce my own watches.
Today I want to present you a Shield watch, this particular one is a 1/1 unique piece. I always was wanted to create something unique, something that immediately cuts into memory, something that is pleasant to the eyes and pleasant to wear.
Since the shield is associated with courage, I was glad to the idea of engraving a lion on the shield, because the lion has always been considered by many peoples as one of the symbols of courage and nobility, and this is the reason why its image can be so often seen on the blazons.
The case of this watch is made of 316L steel and has a size of 44mm and 11.2mm. The case diameter may seem large, but due to the good proportions, the watch looks good on the wrist (for example, my wrist is 16.5 cm, but nonetheless the watch does not seem large). I did not put my name and logo on the caseback since I hope that the future owner will want to engrave his name on it.
The dial of this watch is made of brass, the relief of the dial was applied using laser engraving. After that, the dial was sandblasted and rhodium plated, then the dial was coated with transparent blue enamel. It is very difficult to enamel the dial because it is important to carefully fill the relief of the numbers, but I tried as best I could and was pleased with the end result.
This is a one-hand watch, but despite the absence of a minute hand, it is quite easy to read the time. So the short end of the hand indicates the current hour, while the long end of the hand indicates ten-minute intervals.The two-pointed hand is made of steel completely by hand. The shield is also made entirely by hand out of silver. For engraving of a lion, I chose the method of laser engraving, since laser engraving allows you to achieve a high level of detail in the picture. After laser engraving, the shield was sandblasted to create a background that could emphasize the face of the lion. Initially, I wanted to perform a background using the hand hammer technique, but later I had to abandon this idea because it was too risky to process such a pattern in this engraving. After sandblasting, I polished the face of a lion. The shield itself is inserted into sapphire crystal.
In this watch I used an improved version of the ETA 6498 movement  (also known as 6498 well kept version) with Geneva stripes and blued screws. I love this movement for its reliability, and the beautiful decoration like the Geneva stripes and the blued screws make it even more pleasant.
The strap of this watch is made of crocodile leather completely by hand. The buckle is made of hardened steel, also completely by hand.
Thank you all for your attention!
Take care of yourself! 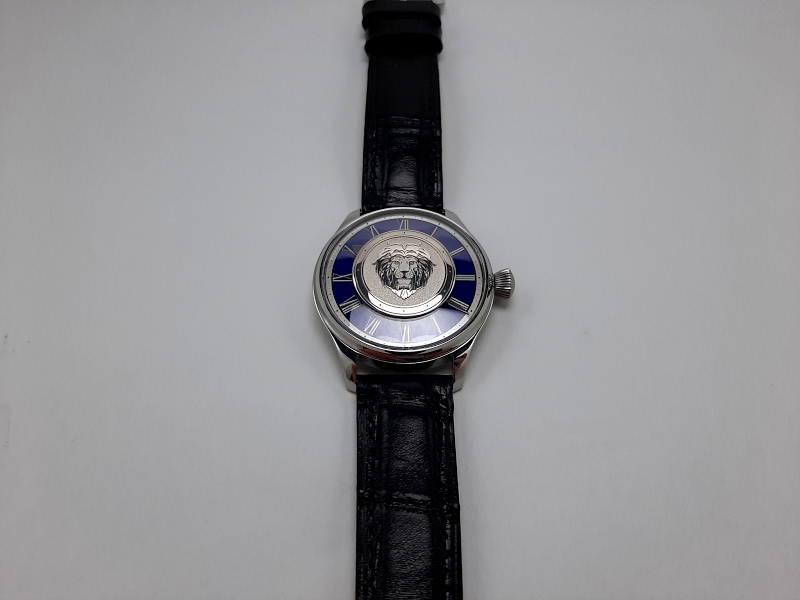 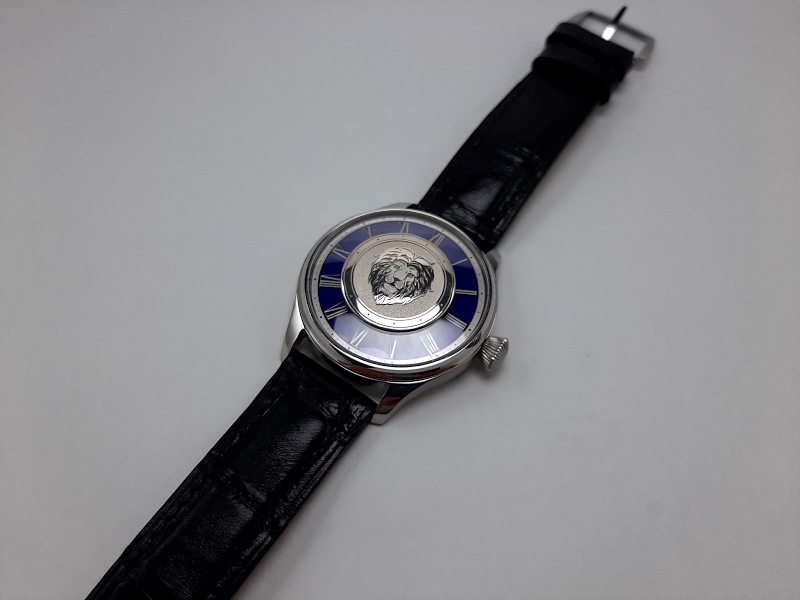 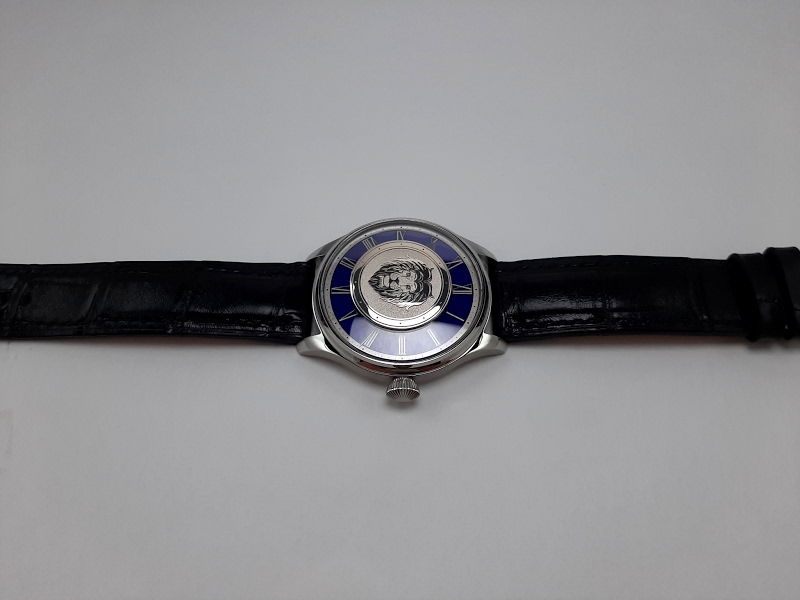 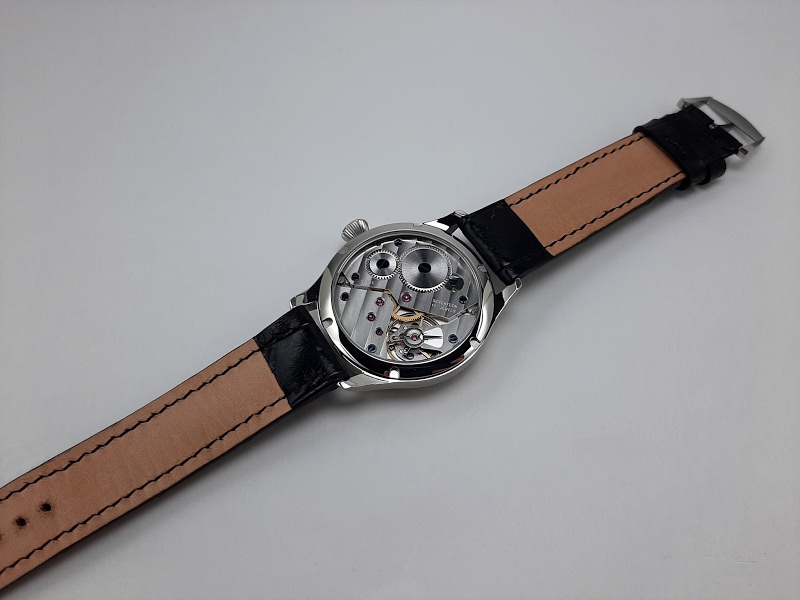 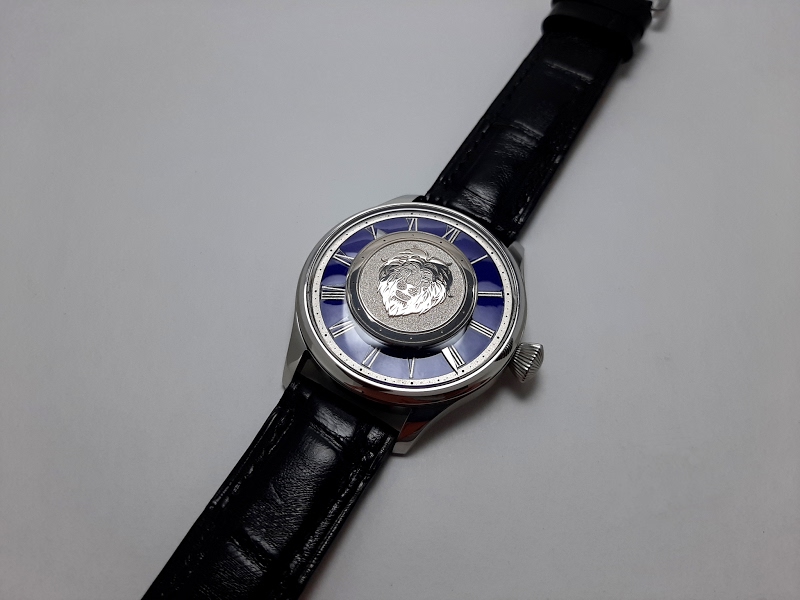 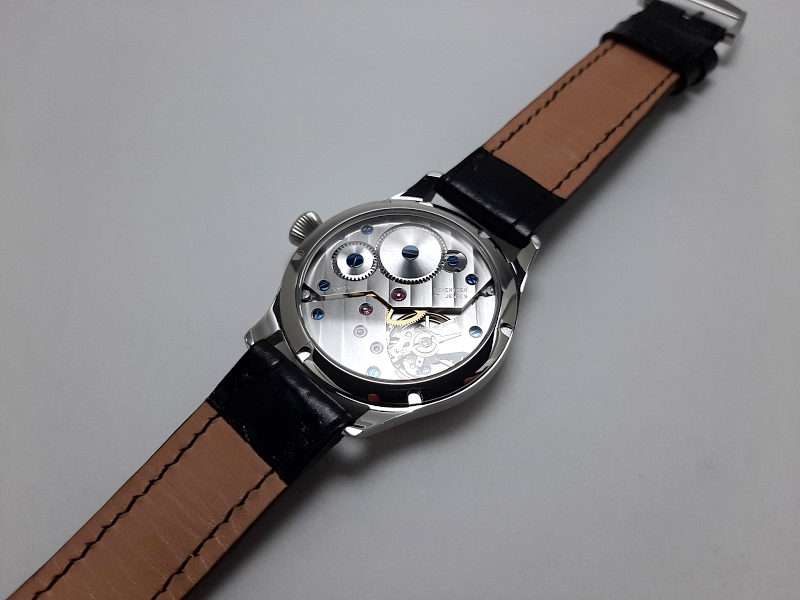 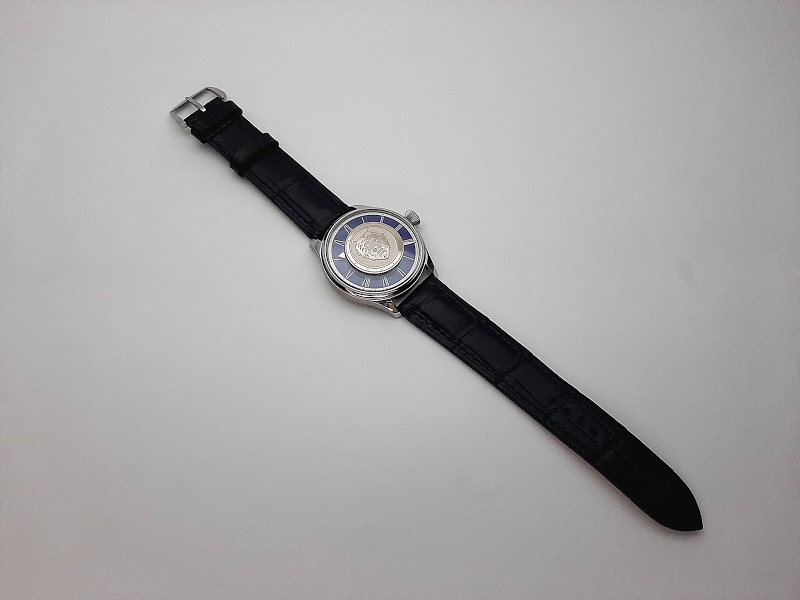 By: Tsoroev Rashid : May 22nd, 2020-05:17
Hello to the all members of WatchProSite! My name is Tsoroev Rashid, i'am 23 years old watchmaker from Russia. I started my watchmaking way when i was 15. When i firstly came in the fine watches shop i was very impressed and immediatly understand what i m...
login to reply

Really good work u wish you all the best

Thank you for your kind words, i really appreciate it.

By: Tsoroev Rashid : May 22nd, 2020-06:49
For order anyone can contact me on Instagram (@tsoroevrashid), on Facebook (Tsoroev Rashid) or just send me an email (you can find my email in my Instagram). Unfortunately i don't made my own website at this moment, but it is in process.
login to reply

Congratulations Tsoroev, and thanks for sharing with us! I sincerely wish you all the best in this field. [nt]

By: Spangles - Mr. Tabby : May 22nd, 2020-09:37
I notice many great watchmakers started with learning to repair old clocks. In this way, they deeply learned how classic movements are made. I'd encourage you, as you continue your watchmaking studies, to see how you can apprentice under experienced watch...
login to reply

Thank you for your kind words.

By: Tsoroev Rashid : May 22nd, 2020-12:29
Yes, you are absolutely right to study and restore ancient mechanisms gives a very good experience, it is also an excellent source for knowledge, but serious equipment is needed to work with ancient mechanisms since often some details need to be done from...
login to reply

Congratulations. I wish you succeed. [nt]

Thank you! I hope it's only beginning) [nt]

By: Watchonthewrist : May 22nd, 2020-12:52
Looks promising and I follow you on IG too .i will keep an eye on your watches and developments 🤗 . Any plans on making a 40mm watch in the future?
login to reply

Thank you for your kind words!)

By: Tsoroev Rashid : May 22nd, 2020-16:31
To be frank i have so much ideas, looks like even life will be not enough to realize them all))) and yes i also thinking about smaller versions of my watches.
login to reply

By: jleno : May 22nd, 2020-21:44
The dial looks attractive and it's very unique. I think this would also look terrific with guilloche or other engraved patterns on the shield. Looking forward to seeing more from you in the future!
login to reply

By: Tsoroev Rashid : May 22nd, 2020-23:24
Yes, i have lot of ideas about the dial of this watch and also have some unique dials for my Arrow collection in work.
login to reply

Very nice! Independents have a special place in my heart. I wish you all the best! [nt]

Thank you for your support ) [nt]

Thank you for sharing your beautiful craftsmanship with us here, and best of luck to you! [nt]

Thank you very much!

A very good start. Wish you every success [nt]

Thank you very much for your kind words and wishes) [nt]