Review: A family of military chronographs, with a special dial: Hamilton.

Jun 25, 2017,05:40 AM
If I tell you that Hamilton is an interesting brand, you  may be surprised.
And you are wrong, as they made a few lovely and interesting watches, in their History.
The watch I want to introduce you shares a  special dial you already know, but in another color.
Here are these special dials, but in white:
Omega Royal Canadian Air force: 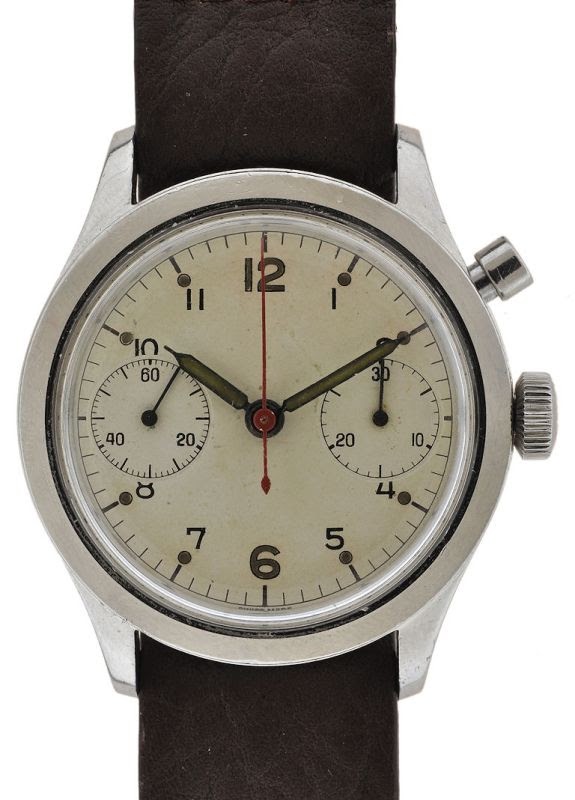 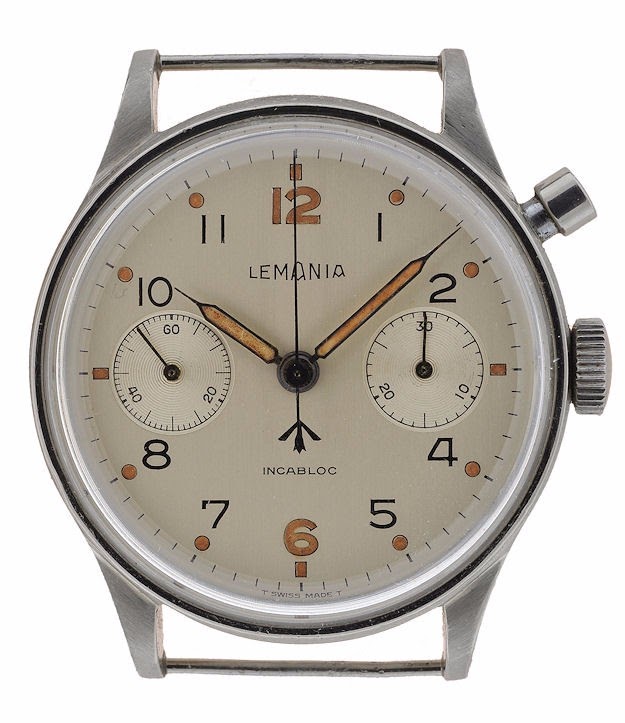 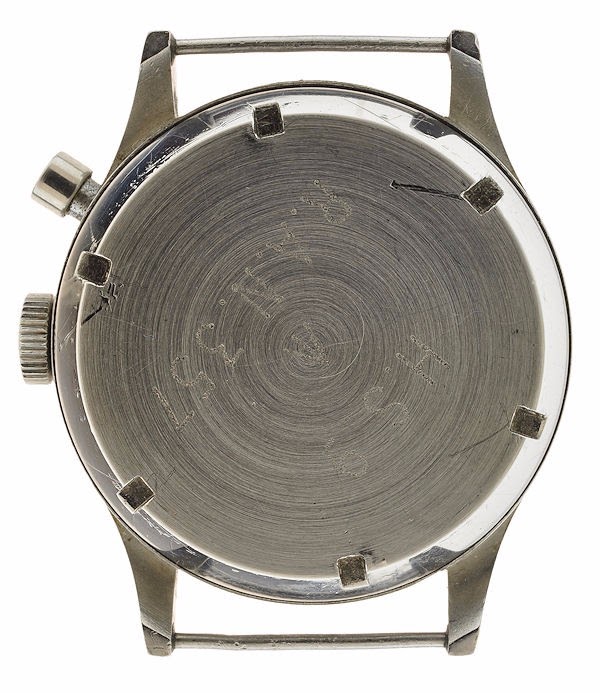 Black or White ( and sterile, to spice the thing, a bit )? 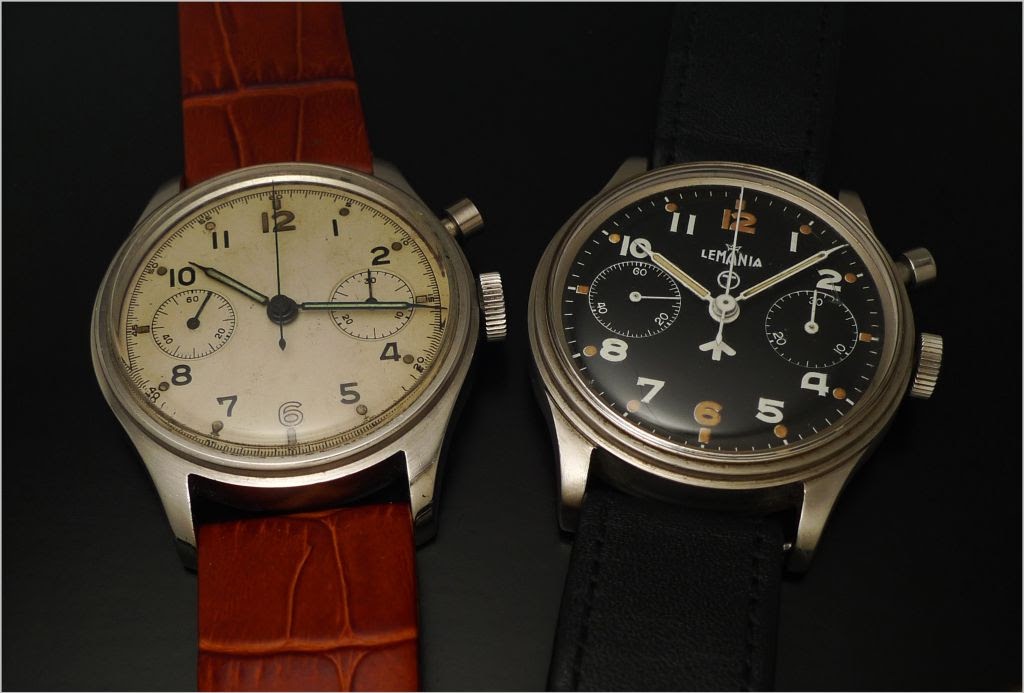 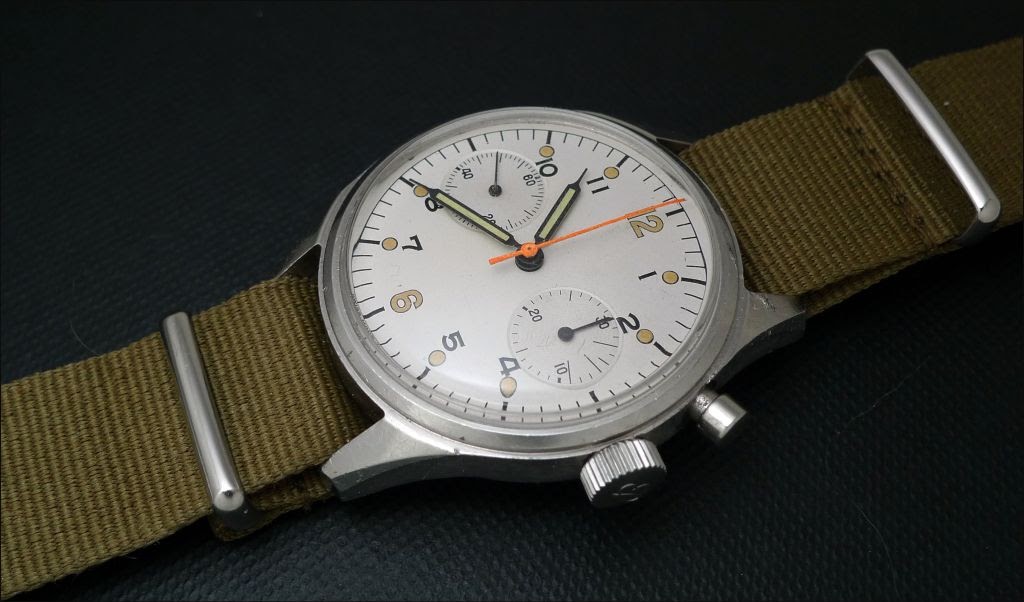 Another Lemania, with an asymetric case, but having the same dial, in a nice creamy color: 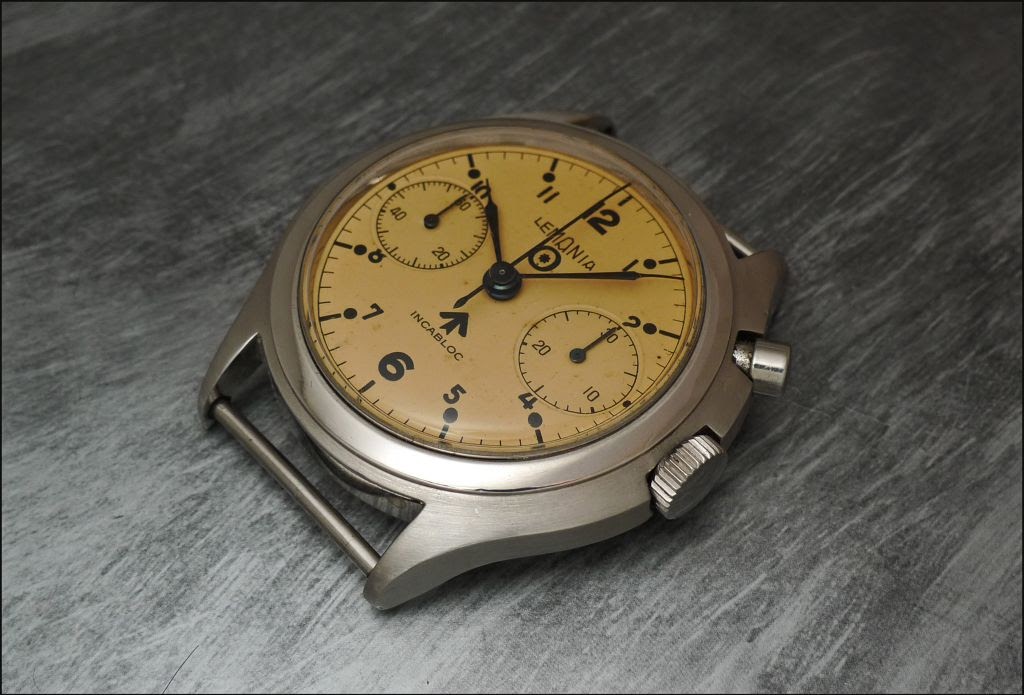 All the dials  have something in common:
- The dots, each five minutes, which are most of the time luminous.
- The oversized 12 and 6, when the other numbers are much smaller AND not luminous.
- The minute and hour hands, which have a very similar shape.
- Sometimes, these dials are sterile ( without the name of the brand on them: See the omega and the Breitling, for example ).
- Their cases too , look very similar, and they are all Mono pushers Chronographs.
You will ask me where is the point between the Hamilton and the chronographs mentioned above...
The answer is simple: The Hamilton Chronograph shares the same dial than those " special white ", but in black! 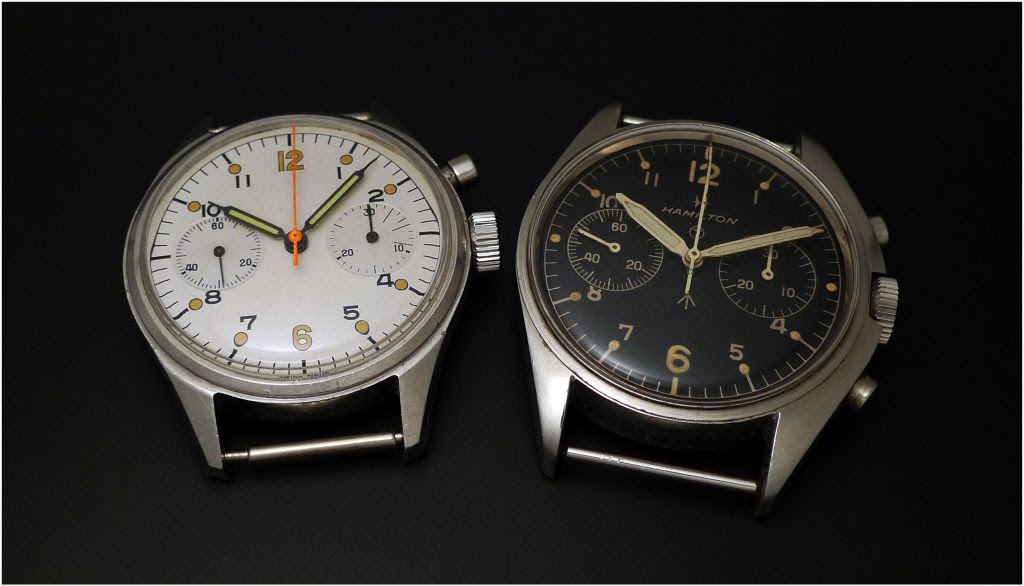 As the " whites " had a lot in common, you have to know that the Hamilton shared this dial with a few other brands...
Here is a photo I found on the net, to be credited to Explorer One, showing the Hamilton with its " brother in arms ", the CWC, the Newmark, and the Precista, both used by the same Army, the Royal British Navy, without forgetting the Lemania, which also came with the black dial, but in a mono pusher configuration. 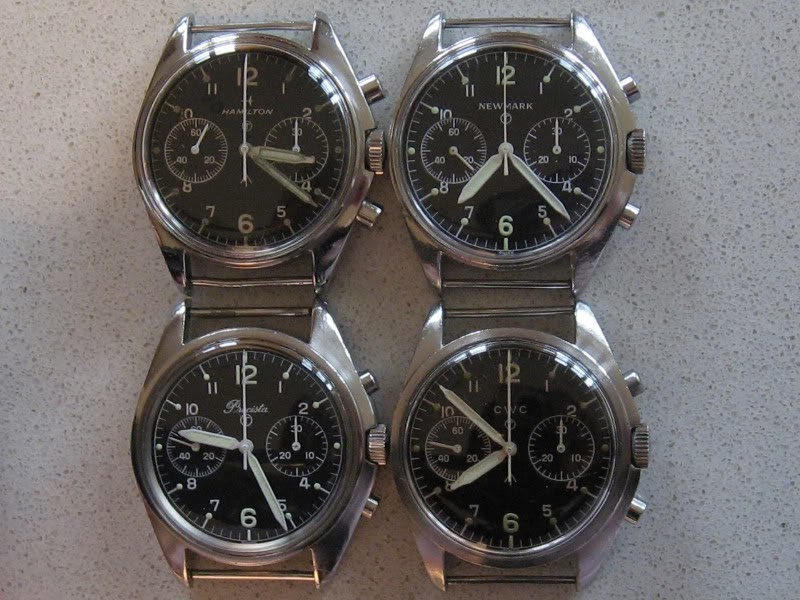 Like we observed it  on the white dials, these black versions  don't only share the dial, but also the hands, the case, the pushers, the movement!
Only the  name on the dial and on the bridge of the movement allow us to make a difference between them. They are pure twins!
Here, a CWC from 1975, I was lucky to take in picture: 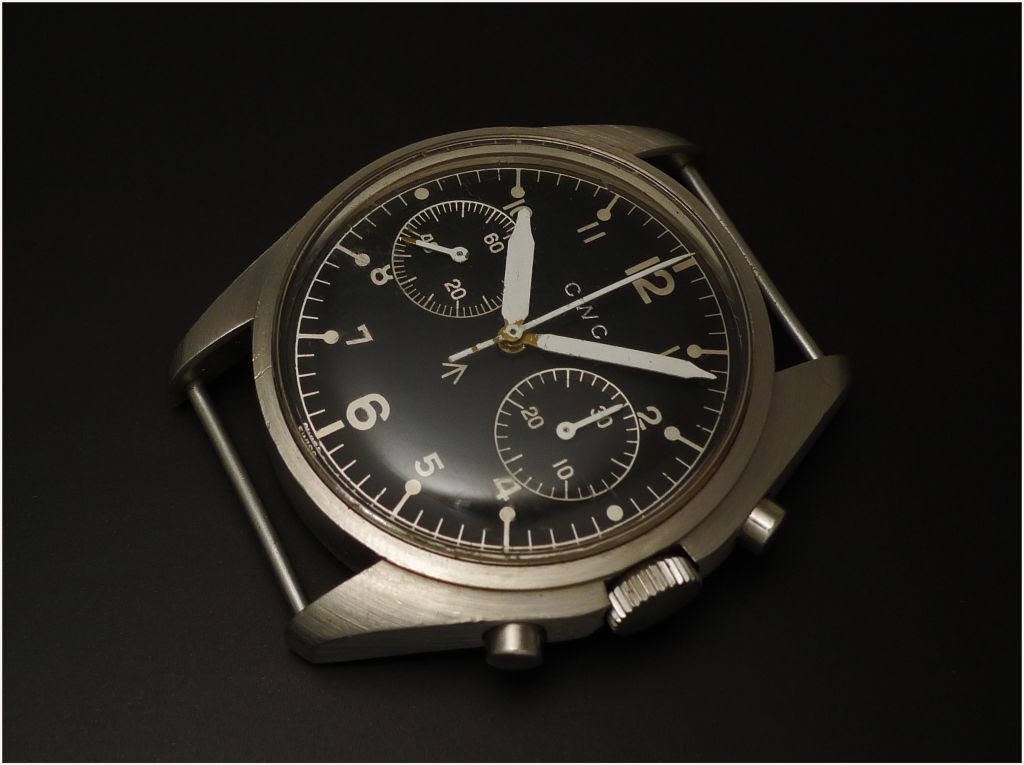 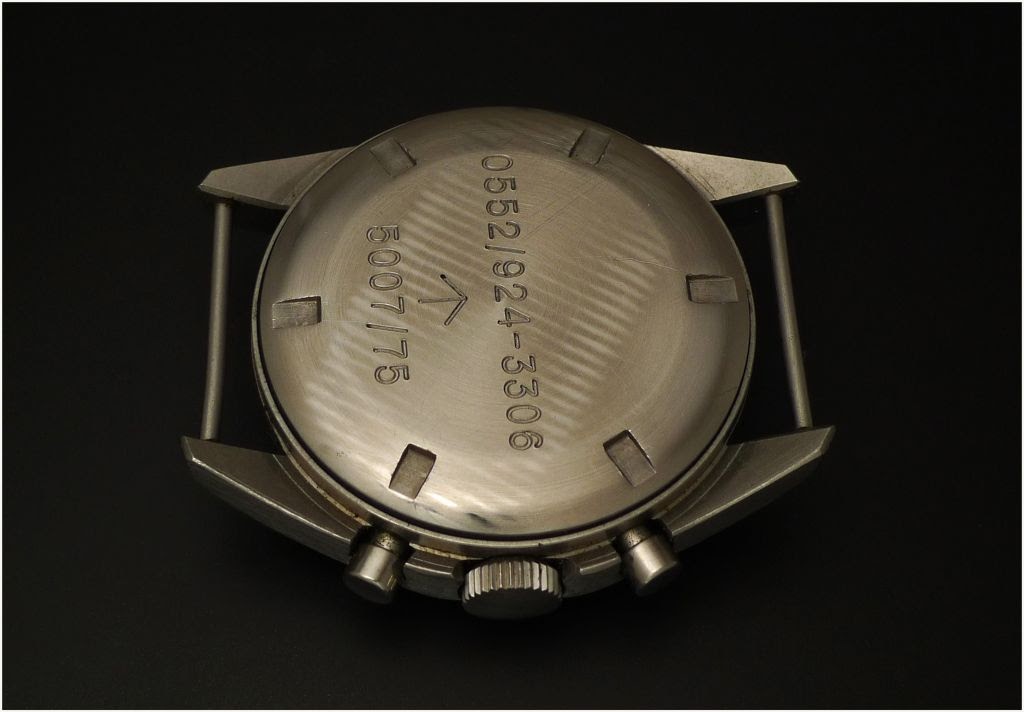 With its signed movement, as said above: 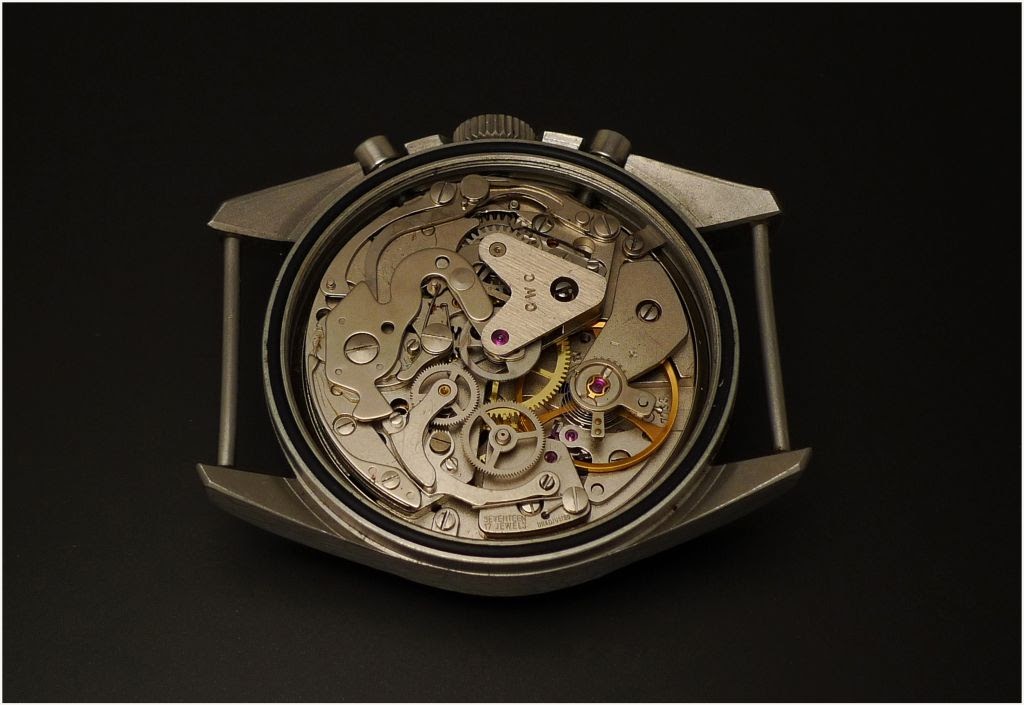 Let's have a look at the Hamilton Chronographs...
Yes, Chronographs, with an S, since there are two, one coming with a signed dial, and the other with a sterile dial.
- Let's start with the sterile dial, which is the closer to the white dials I showed you before: 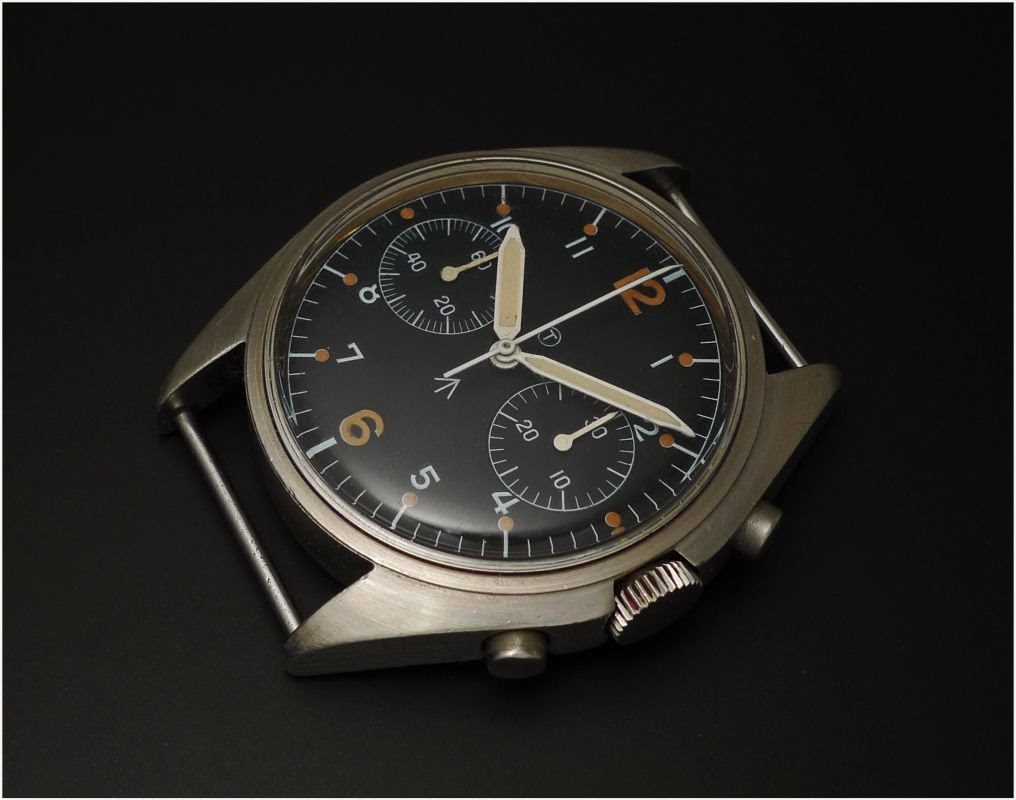 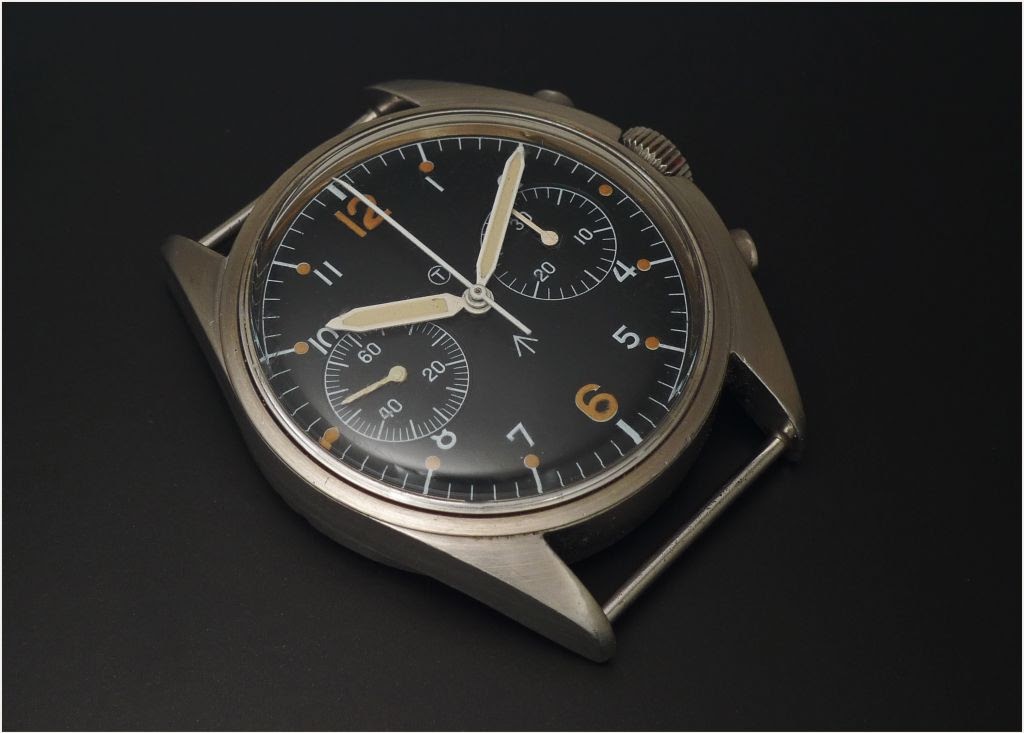 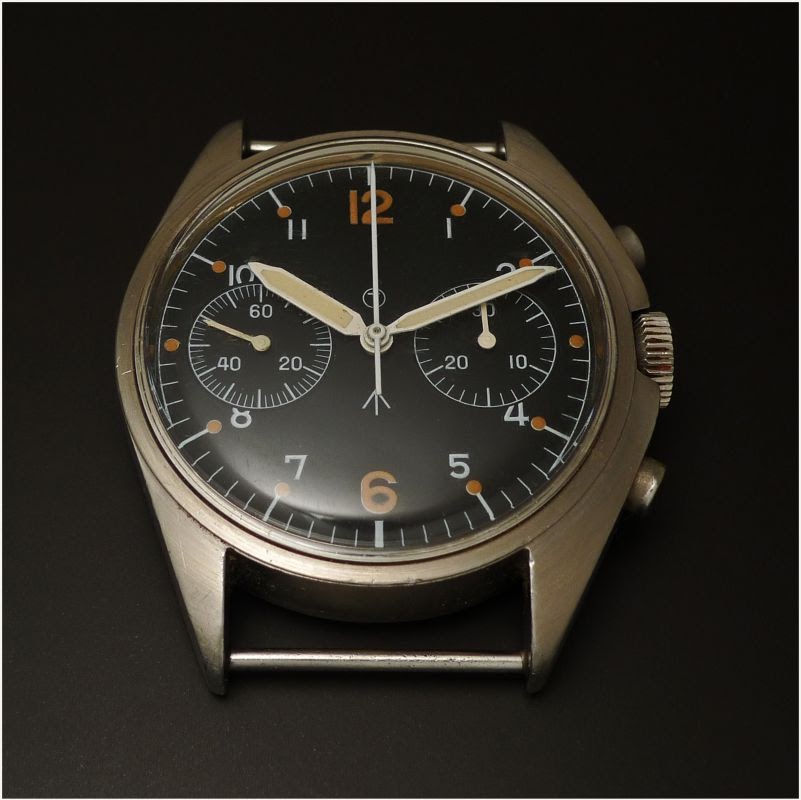 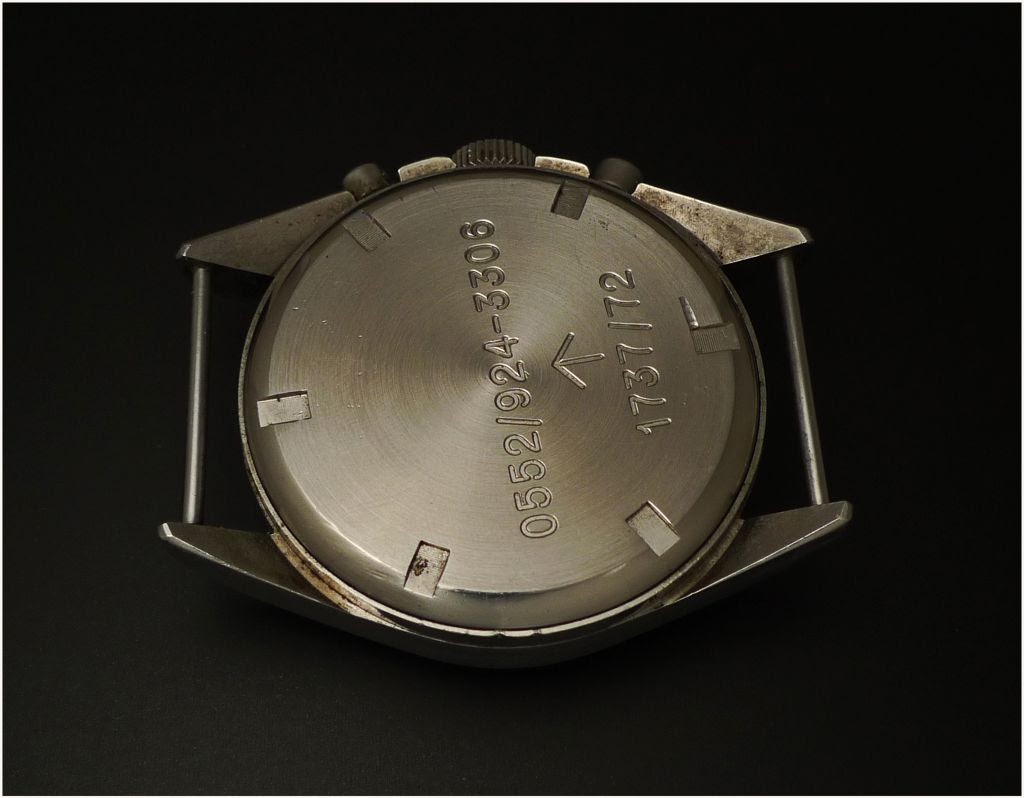 Some observations on this Sterile:
I have no idea on why this dial is sterile. The fact that it could be a prototype doesn't work, here, as there were non  sterile dials beofre this one, two years before, to be exact.
I don't " eat " the theory of the Commandos watch, either, as you have the military numbers and the big arrow engraved on the case back.
It is not totally sterile, as a Benrus can be, because the case back is engraved ( which is not the case on the Benrus Type One ).
But it is  magnificent, I must say.
The absence of any wording on the dial gives a big visual impact, enhances its purity.
Therefore, the patina developed by the luminous indexes and dots is as pleasing as dangerously appealing.
A winner, in my book.
- The most beautiful dial belongs to the second military Hamilton Chronograph we'll see right now, the " Gilt ".
Like its sterile brother, or its cousins from the other already mentioned brands, this Hamilton shares the same black dial, but with a specificity which makes a huge difference. It is gilt.
The assymetric case is 39 mm big, and around 12 mm high, with fixed bars.
I love the way the short and thick pushers are integrated to the case, too. 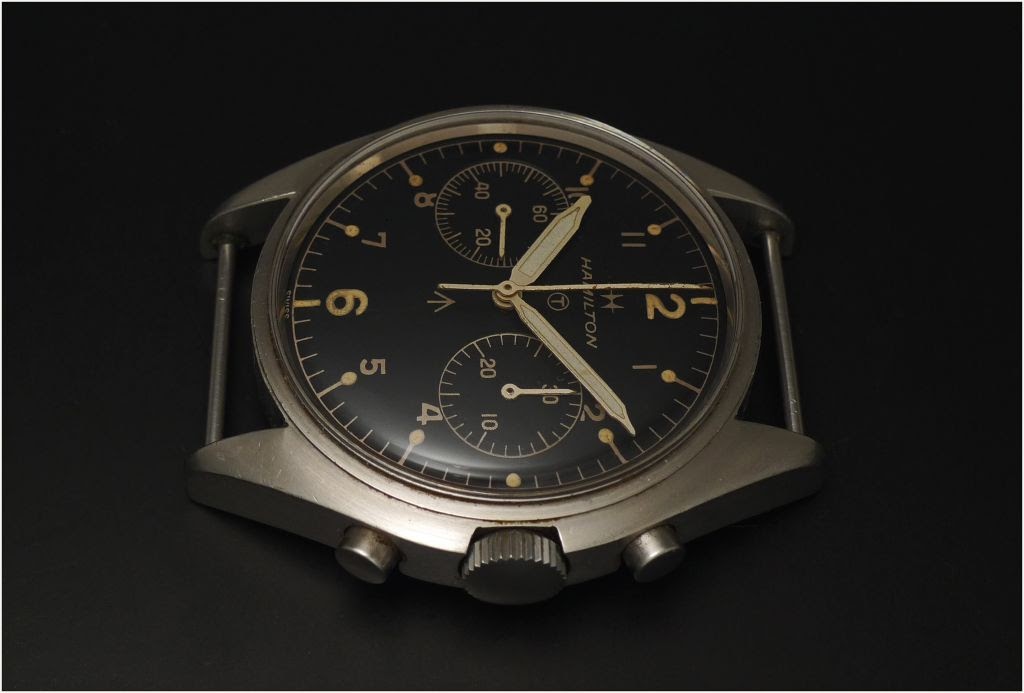 A view on the case back gives us a more precise idea of the shape of the pushers. As you can see, this is the assymetric case which gives them such a strong look. 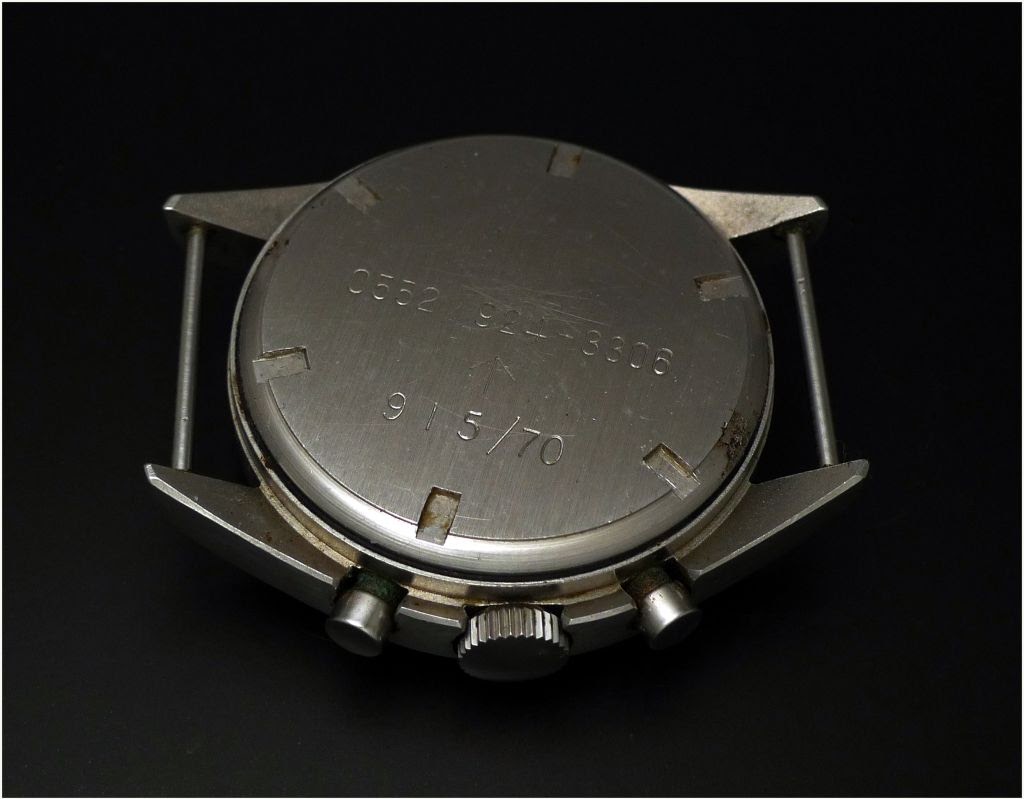 As said, the dial is the strong part of this watch. It is just magnificent.
The glossy finish contrasts in a superb way with these gilt touches, and the nice patina of the luminous dots and numbers.
The hands are less elegant, but at least they contribute to the legibility of this Chronograph, which is essential for a military tool watch. 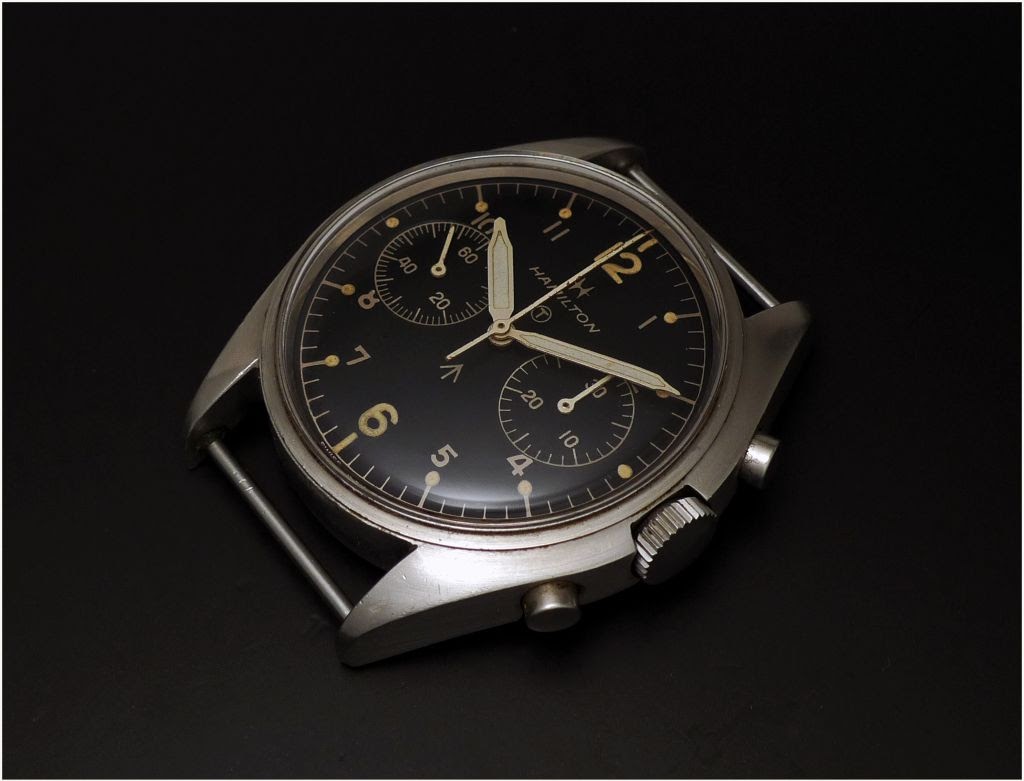 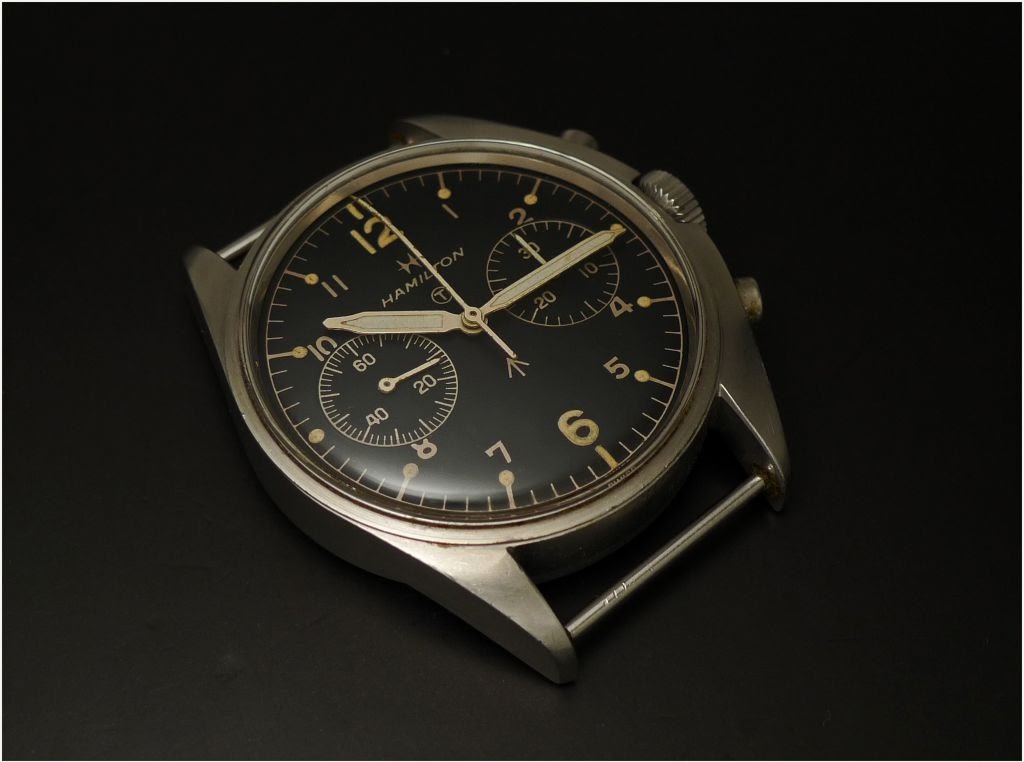 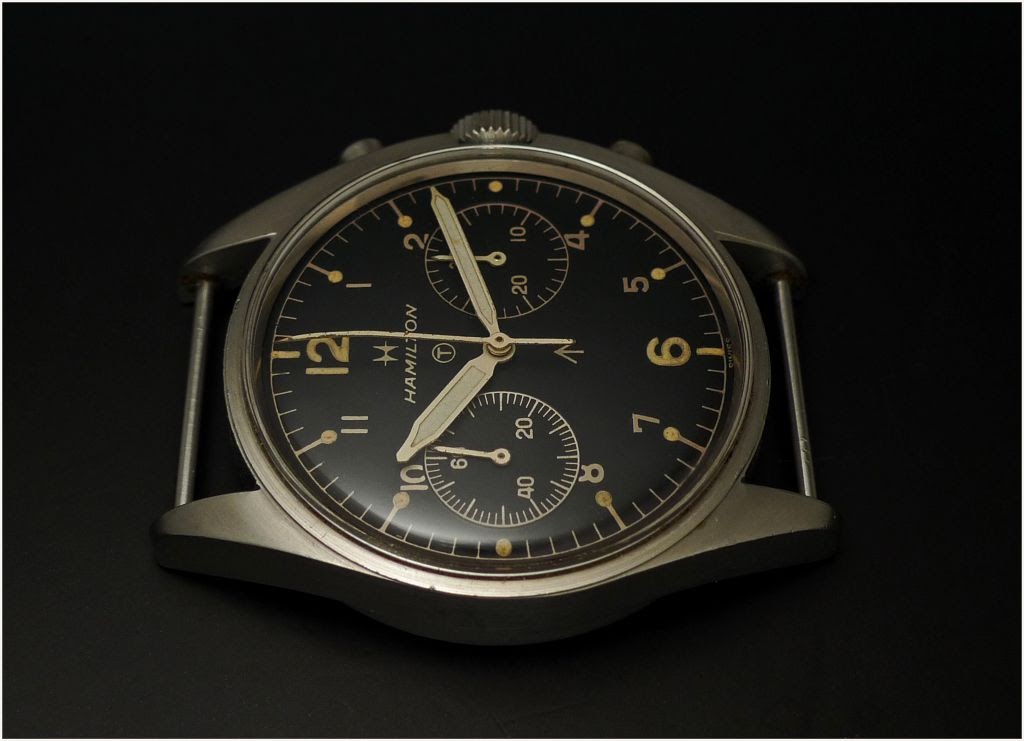 Behind the screw in case back, is beating the Valjoux 7733, whose bridge bears the name of the brand.
Not superbly finished, but reliable, and accurate, which was in production from 1969 to 1978, whose origins have to be found in the Venus 188.
It is a 17 jewels movement, 31 mm big, 6 mm high, beating at the pace of 18 000 vibrations per hour. It doesn't have a column wheel. 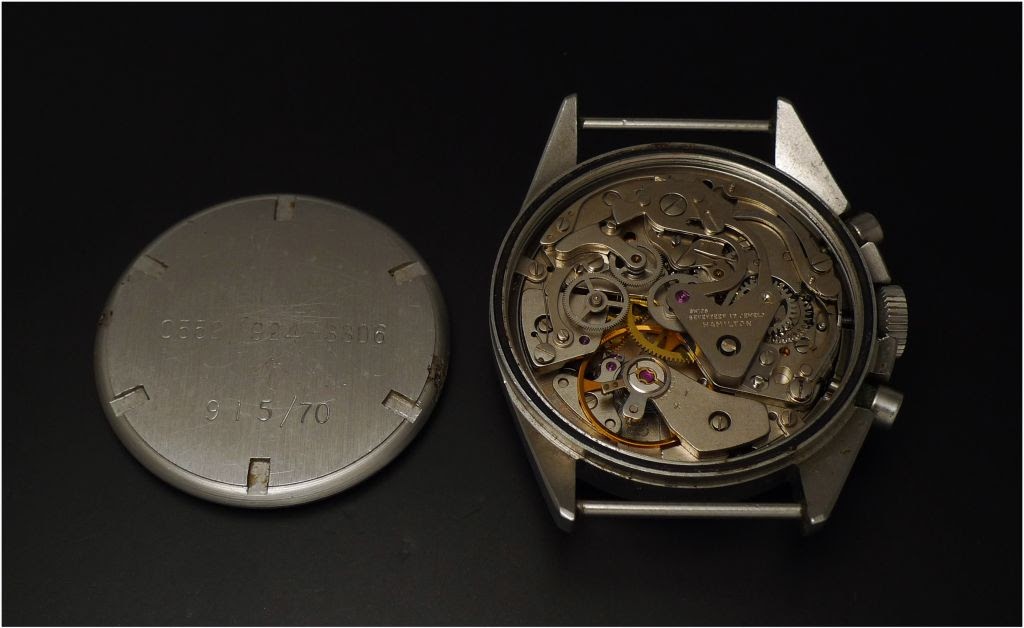 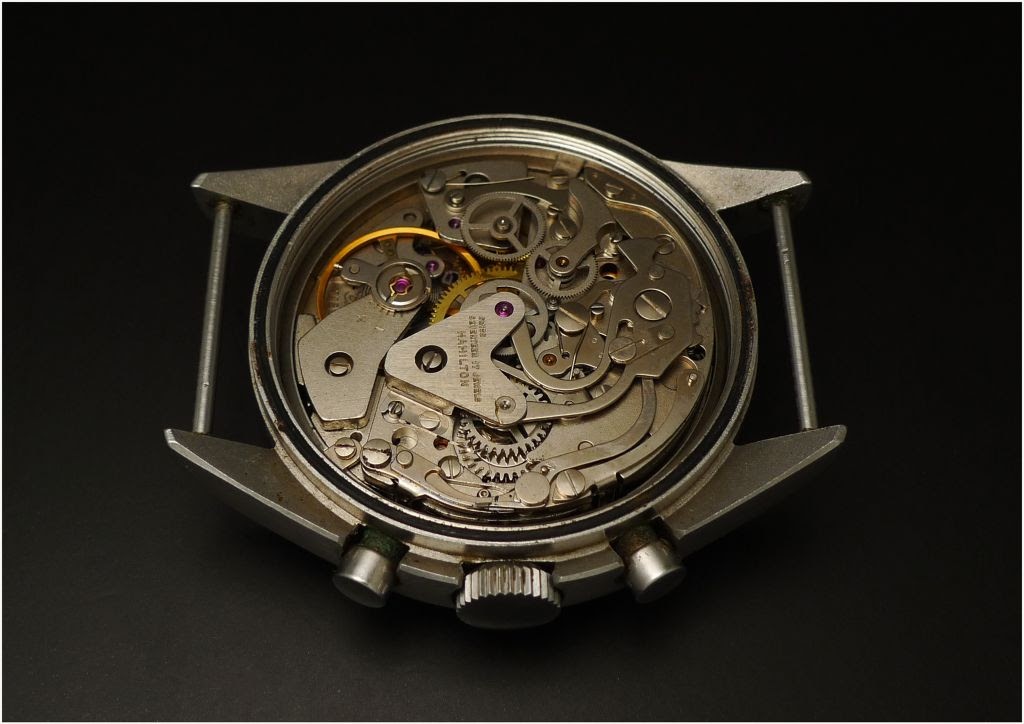 Maybe the rough movement explains why these military chronographs are still very under rated, but that doesn't mean that they don't have charm or interest.
The charm is evident.
Choose a nice Nato ( which is the best and easier choice since the bars  cannot be removed ), and you will fall in love with it. 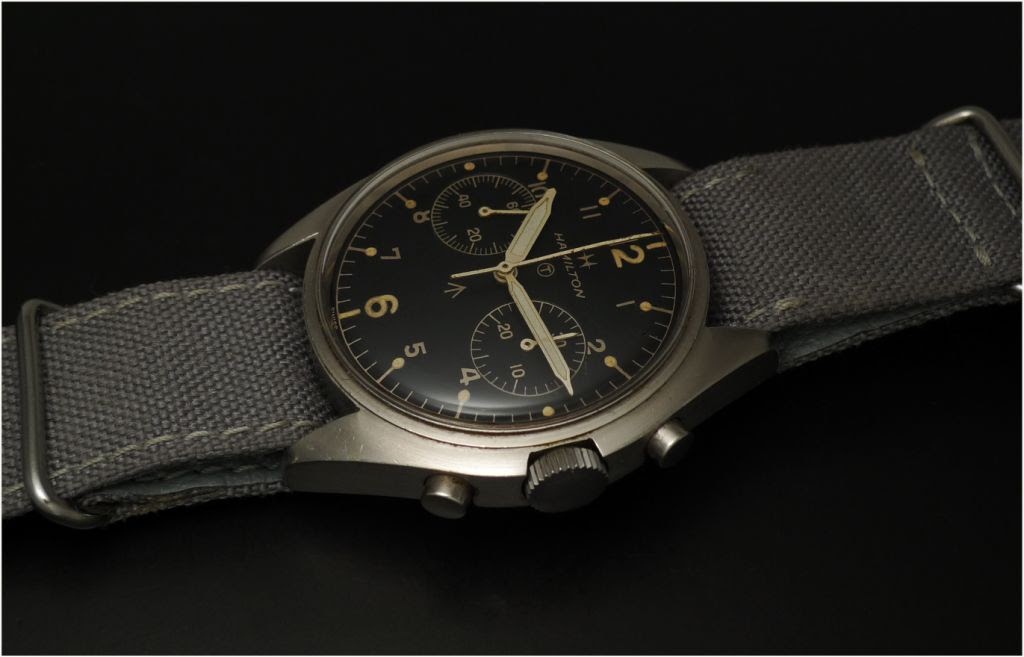 Their assymetric case is great, the dimensions are ideal, the History is here, and the pleasure is assured.
To end in beauty, some extra pictures of a gilt dial which turned to brown... 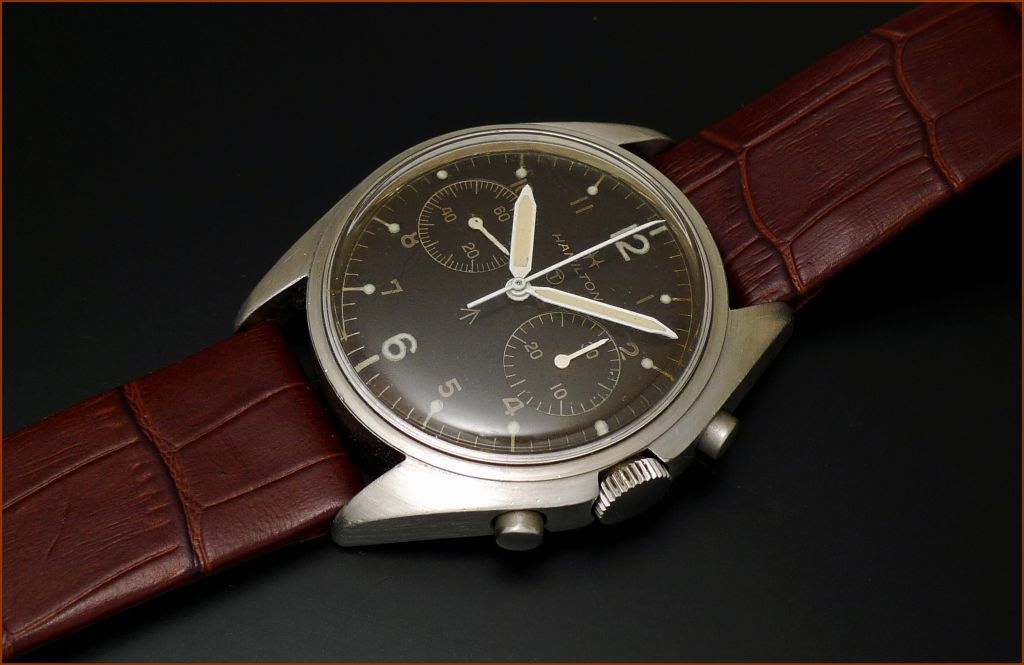 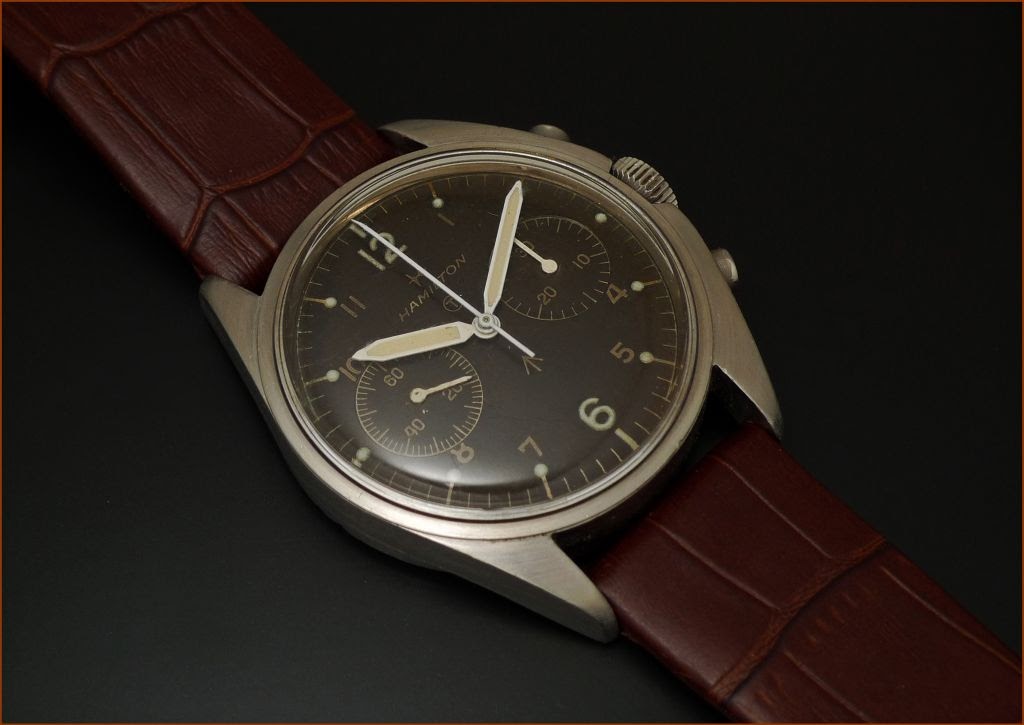 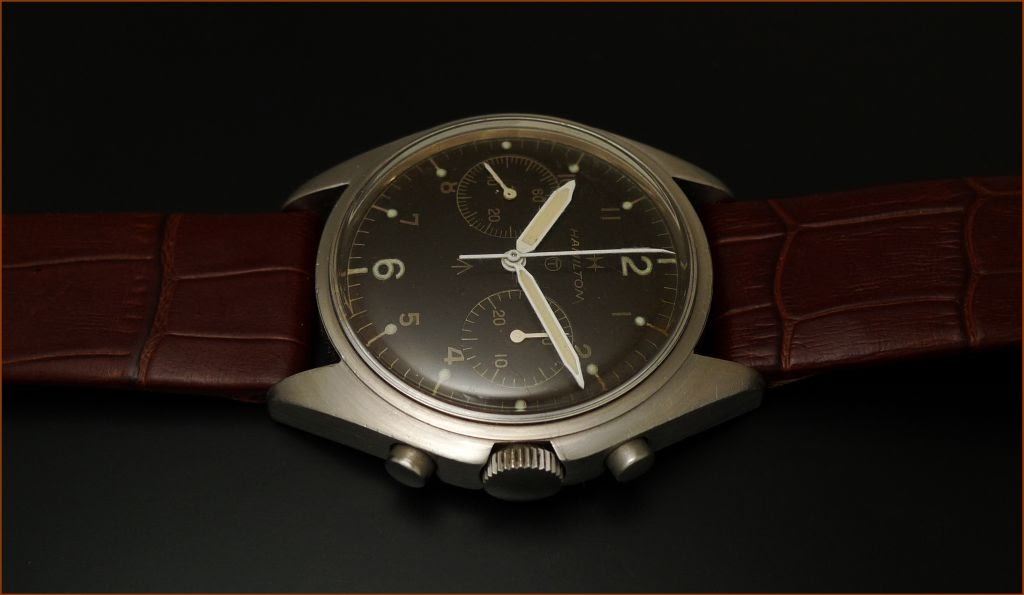 To taste without... Moderation!
Best,
Nicolas

Review: A family of military chronographs, with a special dial: Hamilton.

By: amanico : June 25th, 2017-05:40
If I tell you that Hamilton is an interesting brand, you may be surprised. And you are wrong, as they made a few lovely and interesting watches, in their History. The watch I want to introduce you shares a special dial you already know, but in another col...
login to reply

Fantastic post Nicolas! Each and every one of them superb in terms of condition, design, provenance, patina - in short: they tick all the boxes.

There are still a few to add and hunt... The Instituto Della Marina, for example ( Lemania ). [nt]

I prefer that sterile Hamilton one by far and the cream dial Lemania as a close second. Such a nice pieces ! [nt]

These two and the Breitling are my favorites, too. [nt]

By: Mike H : June 25th, 2017-06:15
Thank you Nico for the incommensurable time that you take to let us learn always new things and discover beauties. Best, Mike
login to reply

My pleasure, Mike. Thanks for the kind words. [nt]

By: kev09 : June 25th, 2017-08:30
What a collection of military watches. I've mentioned before how I love sterile dials on tool watches and there are some beauties here. I shall be re-visiting this post again for further enjoyment that's for sure. Thanks for putting it together for us. Re...
login to reply

You are welcome, Kev. When you think that most of these watches are still under the radar. [nt]

What a great pictorial & write-up !.. These Militaries are true marvels.. :))

By: hs111 : June 27th, 2017-04:35
.. That sterile dial is especially alluring, but both have a bewitching appeal.. Just sending you some dual Lemania greetings, from house to house ! My Yin & Yang Lemanias Monopusher - also really enjoy this low-key appeal ! Cheers & Best, dear friend...
login to reply

I would like to build a small collection of Lemania watches, as well. These 2 of yours are splendid. The Tg 195 especially, with its gorgeous tropical dial. Thanks, HS. [nt]

By: ticktockerati : October 22nd, 2020-02:59
Superb selection and what a great pictorial chronology I'm a fan of the mil/spec RAN chrono's i will post some pictures of mine RAN mono pusher HS-9 symmetrical ⬆️ RAN gilt dial HS-9 issued to pilots on HMAS Melbourne>> ...
login to reply

Great duo you have. Thanks for posting yours and welcome here, by the way. [nt]

By: ticktockerati : November 19th, 2020-22:29
Love your work and I have since started looking at several sterile dial Lemania mono pushers and a nice Hamilton since reading your Blog and I will post them once they are in the bag ⌚️
login to reply

Yes please do so.

By: ticktockerati : November 21st, 2020-05:43
Amanico I love the Grey canvas Nato with the white stitching on the gilt Hamilton, could you kindly let me know where I could order one for myself ?
login to reply

I think this one comes from a strap maker in Milano, Italy.

By: Ludi : November 20th, 2020-05:14
... since I was positive to Covid (as was my whole family), still have strong love for those military chronographs Shade of black to illustrate Stay safe dear members ...
login to reply

the "unknown" is what makes the sterile version special