When I bought this watch every Journe (pretty much) was on sale.  Like most, almost all, independents at that time it was a buyers market for sure as you could buy current production or discontinued references equally easy from your AD, Boutique or the used and gray markets.

A great time to be a watch collector.
In terms of Journe, the CB was of course the cheapest entry point, both new at list price and in the used and gray markets.
Times have changed.  And it’s good for Independents, good for Journe and mostly good for collecting and collectors.
Here’s the CB this morning.  Haven’t worn it in a little while.  Great to have it back on the wrist; it kinda reminds me of good times several years ago. 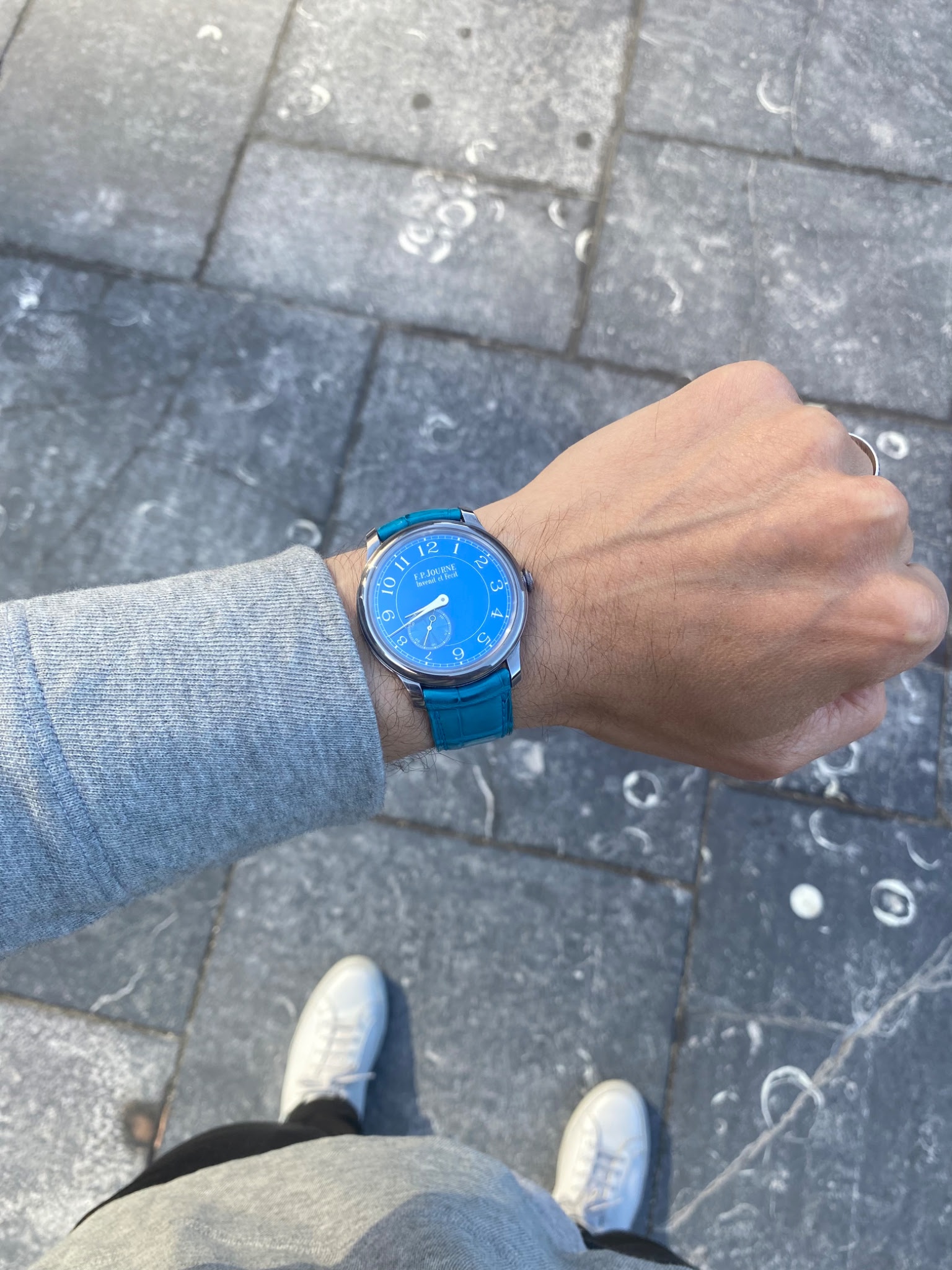 By: Jay (Eire) : July 19th, 2022-12:52
When I bought this watch every Journe (pretty much) was on sale. Like most, almost all, independents at that time it was a buyers market for sure as you could buy current production or discontinued references equally easy from your AD, Boutique or the use...
login to reply

It has spoiled me for sure, as I think this is the optimal for my wrist (diameter, thickness).

By: Jay (Eire) : July 19th, 2022-22:51
It has definitely led to my passing on other watches as they fall short of this perfect match (for my wrist). Btw, I realize I never replied to your message. I’ve been taking a break from that other platform and have not been active for several weeks. Apo...
login to reply

Everything is fine unless you're new to this passion

By: piccolochimico (aka dsgalaxy1) : July 19th, 2022-14:07
Because today just a basic watch purchase is a matter for millionaires. I believe that there are new genuine watch aficionados but I doubt there are many buyers for a CB at 80k. People have lost the perspective, because though we all know how magnificent ...
login to reply

Yes, I do feel somewhat bad for newcomers.

By: Jay (Eire) : July 19th, 2022-23:00
I have many Journe regrets myself, several watches I almost bought on more than one occasion. Most were used as I was primarily hunting 38mm, brass or LEs but some were new. I’ve said it before here, and commiserated with others, we all thought we had mor...
login to reply

It’s not only watches …

By: ChristianDK : July 20th, 2022-06:59
It real estate, it’s cars, wine, art, Pokémon cards… anything that can be viewed as a vehicle for speculation. I find it deeply concerning what has brought us here.
login to reply

I traded this watch for this car

I can understand the trade for a car, but that car? 😂

Well, I was driving 60 miles a day to work/back

What a beautiful watch!

By: patrick_y : July 19th, 2022-22:58
I don't really know a lot about these Honda Insights. But we have a lot of Toyota Hybrids in California. The Toyota Camry Hybrid and Toyota Prius Hybrid are the popular models here. Not unusual for them to have 300,000 miles here with minimal maintenance ...
login to reply

Well am pretty sure this one will never be on sale ever again! Looks amazing BTW!

I think you are right about that.

By: TeutonicCarFan : July 20th, 2022-00:52
I remember lusting after these when they were 15k and I didn't have the money. The size, the thickness, tantalum case, blue dial, time only, and the brass movement. Now I can afford at msrp but I am no insider with journe (and grey market no way )
login to reply

I think we all have had those situations of just not being in a position to purchase and then when (if) one gets to that position the item is no longer easily found or at the right price point t.

By: cfn : July 20th, 2022-05:50
I was on a ‘watch walk’ with the New York chapter of the time zone website back in 2013. Brilliant walk up and down Madison Avenue, hitting all the brand boutiques. We hit fpj where I saw the CB for the first time. Came back later the same day and walked ...
login to reply

I remember those watch walks; I did a few also.

By: Jay (Eire) : July 20th, 2022-12:32
Then there was the Madison Ave Watch Week Walks, can’t recall if TZ was involved in those but they were sometimes fun too (very dependent on each respective Boutique and what they decided to do, or not do). As for the CB, it remains a strong favourite of ...
login to reply

Good to see you wearing it, dear friend.

By: ChristianDK : July 20th, 2022-06:54
It’s a piece that deserves some wrist time. It deserves to to be seen beyond the hype because it is so much more than that. Luckily it think Journe still flies under the radar among the general public. And it’s pretty safe to wear unlike E.g. Rolex, some ...
login to reply

It does deserve wrist time.

By: Jay (Eire) : July 20th, 2022-12:34
In reality the CTS has stolen much of the CB’s wrist time, so at least I’m keeping it in the family ! I think when work travel returns properly for me the CB may get more wrist time as the CTS is far too casual for most of those situations.
login to reply

I know what you mean Jay..

By: jp884 : July 29th, 2022-00:33
FPJ were bargain buys back in the day and it was a very small community. That all changed when speculators came in and ruined everything. Who knows maybe things will go back to some sort of normal but I believe the days of getting Journes for 30-50% on th...
login to reply