While the Panerai brand was founded in Florence in 1860, the Panerai watch came into being in the world of the depths of the sea. To be precise, the depths of the Mediterranean, where in March 1936 the commandos of the Italian Navy first tested the prototype created by Panerai in response to  the  request from the  General Staff to  develop “a special luminous underwater watch”. The Royal Navy, as it was then  called, evaluated the creations of many established producers, but the only example which satisfied all the rigorous requirements of the military authorities was  the one which would become Panerai’s first prototype, and also, according to many, the first professional underwater model in the history of watchmaking: the Radiomir. 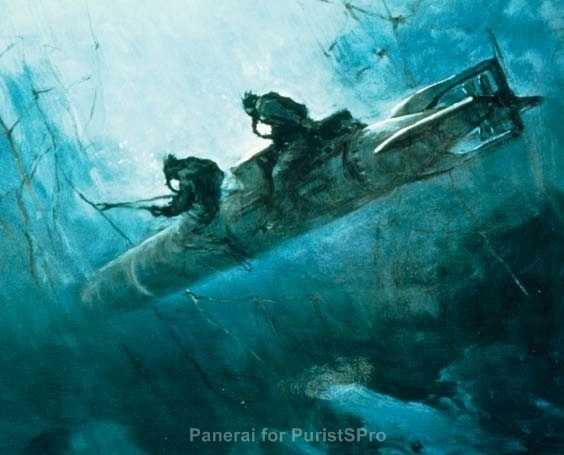 In the years before the Radiomir was created, watches had already been made that were water- resistant because they  had  a double case,  that  is, they  were inserted in a hermetically sealed case, or fitted in a screw case that could resist the pressure of water to a certain depth. But water- resistance alone  was  not  enough for the  Italian military  authorities, who required a watch which met several  other requirements that  were fundamental for the commandos who would operate underwater for long periods, frequently in critical conditions.

When the Florentine watchmaker Panerai created the Radiomir, the company had already been a trusted supplier of the Navy for some time. In 1938, two years after the success of the prototype, it put into production the first ten examples for the men of the naval assault forces which were part of the Italian Navy’s  Submarine Command. On their wrists, over  of the waterproof suit of rubberised fabric,  the  commandos wore both a watch, the  indispensable instrument for  synchronising all wartime operations, and  other precision instruments developed by Panerai,  such  as the  depth gauge and the compass.

Equipped only with  this vital equipment, the divers  of the Submarine Command carried out  their operations riding  slow-speed torpedoes (Siluri a  Lenta   Corsa or  S.L.C.),  special underwater vessels which carried two operators seated astride the  vessel.  On  these human torpedoes, also known as “pigs”, the commandos explored the depths of ports in the Mediterranean under extremely difficult conditions, in the darkness of the night in waters which were frozen and muddy. They  descended 40  metres below the  surface of the  sea  and  remained immersed for  hours, depending only on their  instruments, which consequently had  to be guaranteed to provide the maximum resistance, reliability, accuracy and legibility. 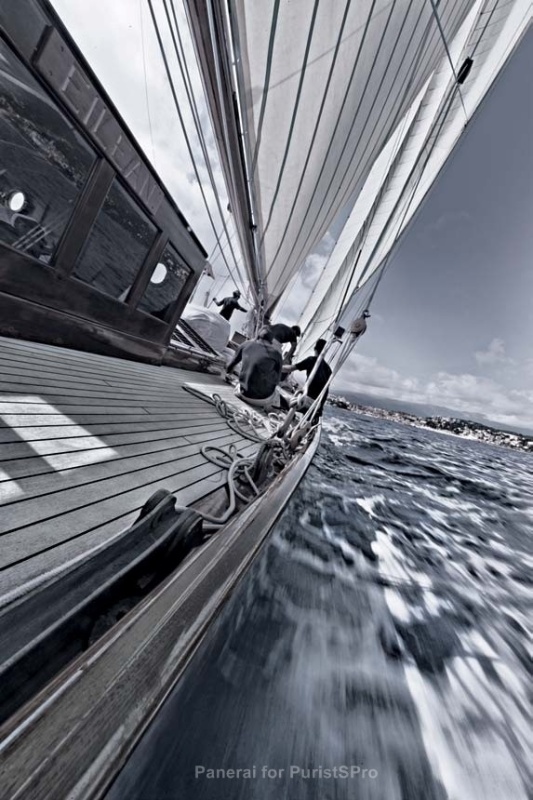 The identity of Officine Panerai  is still today that  of the  company which invented the  Radiomir. In the years which followed it has created a collection of timepieces which have become part of the history of watchmaking for their uniqueness and authenticity. About a century after developing its first instruments for the Italian Navy, Panerai still finds its own reference universe in the world of the sea: in every new creation it instils that remarkable blend of history, technical skill and design which makes Panerai  watches unique.

History, technology, design. The Officine Panerai collection presented at the Salon International de la Haute Horologerie 2013 rises from the depths of the sea and of time,  to affirm  once more the unmistakable identity of these top-of-the range sports watches in which everyone produced is a synthesis of these elements. 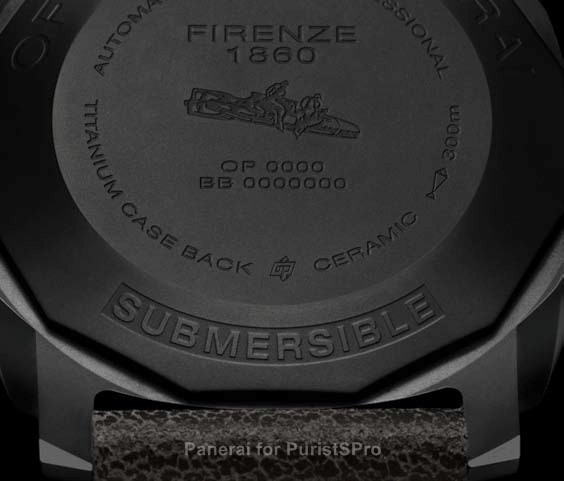 The new  Submersible range of watches is a perfect interpretation of this synthesis. Designed with the vocation of exploring the depths of the sea, the new  Luminor Submersible 1950 3 Days Power Reserve Automatic Bronzo and the Luminor Submersible 1950 3 Days Automatic Ceramica have movements developed and  produced entirely  in the  Officine Panerai  manufacture in Neuchâtel. These are combined with  cases incorporating research into technology and case  materials, in a design where every  detail  is faithfully  inspired by the  watches created by Panerai  for  the  Italian Navy during the last century.

The family of in-house Panerai  movements is enhanced by two important novelties in the field of chronographs: the  P.9100  calibre,  the  first Panerai  automatic movement with  the  chronograph flyback function, and  the  P.9100/R, which combines the  chronograph function with  the  Regatta countdown for the  start  of yacht races.  The regatta countdown is an instrument of the  highest technical content for  all the  sailors  and  navigators who take  part  each  year  in the  international races of the Panerai Classic Yachts Challenge, the main international circuit for vintage and classic yachts. 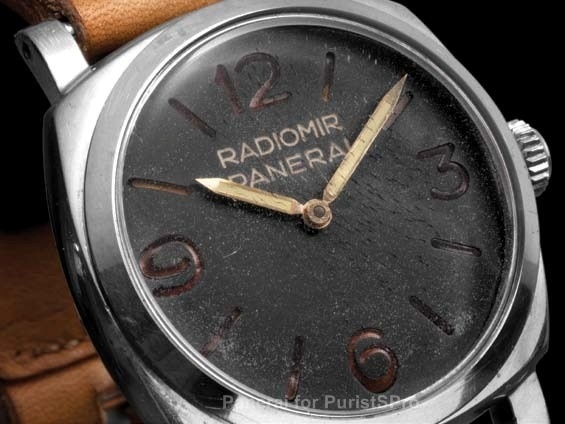 The  new  Panerai  collection includes several  fascinating versions of  the  historic Radiomir 1940 case. This represents the moment of transition, in about 1940, from the first cushion case that was characteristic of the  Radiomir of 1936  and  1938  to the  more massive Luminor, distinguished by the device protecting the winding crown, the definitive version of which was established in about
1950.

Finally, the  new  and  extraordinarily complex tourbillon squelette is a testimony to  the  skill and expertise of the master watchmakers of Neuchâtel and the research and development carried out by Officine Panerai’s Workshop of Ideas. It is used  in the first Panerai  pocket watch, a remarkable timepiece in ceramic reserved for  collectors of  the  most exclusive and  sophisticated Special Editions. This watch is an original creation which brings  together the P.2005/S movement and the Radiomir case  in ceramic.

By: Kong : January 21st, 2013-04:08
THE SEA, HISTORY, TECHNOLOGY AND DESIGN While the Panerai brand was founded in Florence in 1860, the Panerai watch came into being in the world of the depths of the sea. To be precise, the depths of the Mediterranean, where in March 1936 the commandos of ...
login to reply

By: Kong : January 21st, 2013-04:33
In its long history, Officine Panerai has often been involved with the world of the deep, creating watches capable of operating at extreme depths. With the new Luminor Submersible 1950 2500m 3 Days Automatic Titanio, Officine Panerai continues this long t...
login to reply

By: Kong : January 21st, 2013-04:52
The absolute darkness which rules in the depths of the sea is reflected in the appearance of the Luminor Submersible 1950 3 Days Automatic Ceramica, the new Officine Panerai Special Edition which, with its matt ceramic case, its P.9000 manufacture movemen...
login to reply

By: Kong : January 21st, 2013-05:03
In the mind of every sailor, bronze immediately evokes images associated with the sea. Vintage yachts and ships are rich in objects made of this material, which reacts to the passage of time and effects of the atmospheric by acquiring a patina which makes...
login to reply

By: Kong : January 21st, 2013-05:16
Officine Panerai presents the Luminor 1950 3 Days Chrono Flyback, a new chronograph with a flyback function and an automatic movement with a power reserve of three days. Available in a purely sports version in steel or as a more elegant one in red gold, t...
login to reply

By: Kong : January 21st, 2013-06:03
The start of a vintage yacht race is a moment of remarkable beauty. The boats of every class, with timbers sometimes a hundred years old or more, gather together at the starting line between the buoys, driven only by the wind which fills the sails and by ...
login to reply

By: patrickh : January 21st, 2013-06:10
chrono is also a nice addition for sail races. Sailors will be pleased to get one and also appreciate it is not a limited serie. Thanks to Kong for its so rapid coverage. Cheers, Patrickh
login to reply

By: Kong : January 21st, 2013-06:46
RADIOMIR 1940 In about 1940, the Panerai workshops in Florence perfected a new case, designed to meet the increasing demands of the commandos of the Italian Navy. The case had evolved from the one presented in 1936 which is known today as the Radiomir – a...
login to reply

By: Kong : January 21st, 2013-07:02
The Radiomir 1940, in both the steel and the red gold versions is also available with the case 42 mm in diameter with the P.999 hand-wound movement, the smallest and thinnest in the wide range of calibres produced by the Officine Panerai manufacture in Ne...
login to reply

Thanks for the report Kong

By: Kong : January 21st, 2013-07:35
In 2007 Officine Panerai launched the P.2005 movement, a sophisticated hand-wound calibre with an innovative interpretation of the tourbillon regulator, distinguished by a simple but revolutionary insight which makes the movement unique. The traditional r...
login to reply

Videos of the Panerai 2013 Novelties

Thanks for the report I love the 508 ceramica. [nt]

Thanks Kong for posting the new Panerai models!