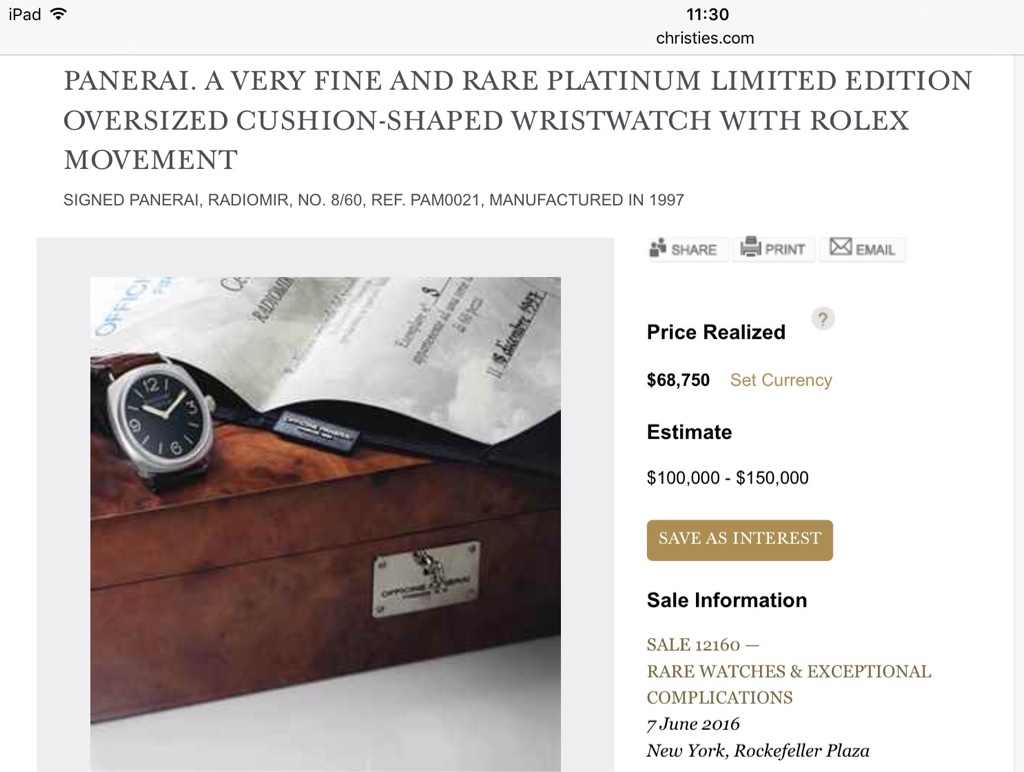 By: sergio : June 8th, 2016-03:58
caught in the "bubble" of the Panerai..golden era..in general. Only 10 years ago, all the T-dials and some LE, were the...graal...of a lot of people. The bubble burst, the fashion faded in Asia (responsible for the bubble) and the prices..rightfully..came...
login to reply

Good to see you around Sergio ;)

By: sergio : June 8th, 2016-18:55
I still visit this forum daily. Haven't seen you around much. On occasions I see some of your posts on FB. I'm not doing well, I'm doing spectacularly and of course I hope it's the same with you Ciao
login to reply

By: Makilla : June 9th, 2016-12:15
Well you're right, I'm not around lately. Have so many things going on at the moment. Are you still going to GTG's in Firenze? I haven't been to that place for some time now. Good talking to you buddy! Ciao
login to reply

Quite a change in only 6 months

The HK auction was bad in every way on every lot except a few. It means the market there is down. Sell in Geneva!!!! [nt]

If Anthony offered it to me in the 60k range I would not hesitate. But the auction is what it is.

I think you are right. Too many new references, too many OOR.

Wow!! I never expected to see this!

By: Makilla : June 8th, 2016-10:30
A PAM21 selling for less than 70k? Who would have thought? Panerai golden days are over and things are getting even worse with the brand. It's losing the secondary mkt trust and most people aren't interested in investing in it anymore. Too bad because in ...
login to reply

That's some bad news for the former owner. Unless the reserve has not been reached. [nt]

I was thinking the same...

Wow, the Panerai bubble has burst

By: andrevmsilva : June 8th, 2016-12:09
Nowadays we can even find the once "hot" Panerai 127 Fiddy for sale in some sites. As said, I think that the cooling in the Asian market is responsible for this price drop, but not entirely. I also blame the countless "limited" editions released year afte...
login to reply

I'm noticing a soft watch market across all at the moment! [nt]

A keen observation of reality some seem to have missed.

By: Chuck A : June 9th, 2016-11:11
And, let's remember what the Pam 21's original retail sales price was when this watch was released. If this seller was the original owner, he still did well with this sales price, although not as well as if he had sold two years ago.
login to reply