For example, you might have 7 teeth on one small gear, and 28 on a larger gear that meshes with it. That ratio is 7:28 or 1:4. Each time the larger gear turns once, the smaller gear will turn 4 times; each time the smaller gear turns once, the larger gear rotates 1/4 turn.
You can add and subtract pairs of gears to increase or decrease rotational speed (if you add just one gear, it will change the direction of rotation of the gear train's output).
NOTE: You will notice that some gears have many small teeth. Others have few large teeth. The small teeth are used to turn opposing gears smoothly with little friction. If there are large, triangular teeth you can bet they are going to flip a day or month display in one motion, not smoothly move a seconds, minutes or hour hand.

Here is a typical set of gearing designed to turn a slow indicator (moon phases). For this indication we have to slow down the speed of our drive signal coming from the base movement. 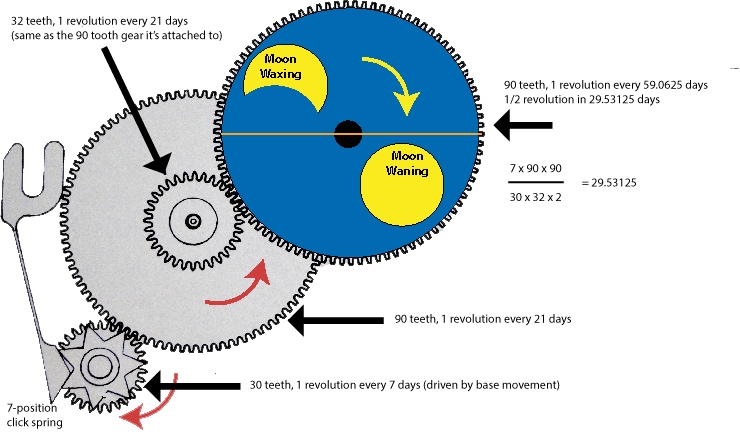 At the bottom left, you see a gear with two sets of teeth. The big teeth (7 of them) are attached to the day-of-the-week hand indicator (not shown here) and together with the spring they make it jump from day to day.

The smaller teeth (30 of them) turn the larger wheel (90 teeth) above. A small gear on that wheel (32 teeth) turns another large gear with the moons painted on it (90 teeth).

The ratios of all these gears are worked out on the diagram. They ensure the moon wheel turns 1/2 revolution in 29.53125 days - accurate enough to represent the moon's movement for 122 years.
After that you will need to adjust it manually (and of course you must adjust it every time the movement runs down and the watch stops).
NOTE: The phases of the Moon are almost always shorter than a  calendar month, so the phase of moon that happens at the beginning of the month usually occurs again just before the end of the month. Every 2.7 years, a full moon phase occurs twice in the same month. This is called a "Blue Moon." This interval of 2.7 years is constant, but enough months go by between sightings that the phrase "Once in a blue moon" was coined to mean something that rarely happens. I can safely say that roughly every 4 Blue Moons, we have a new decade.

Most watches deal with hours, minutes and seconds. Three hands (sometimes even 2, or 1). However, the more you pay the more you can get, and the Swiss watch and clock makers of the past figured out how to display many longer intervals of time, all the way up to centuries. Today we will ignore non-calendar indicators, like signs of the zodiac.

After every 10 decades, we enter a new century. Because many people are born near the beginning of a new century, they may not live in two different centuries during their lifetime. I was born near the middle of the 20th century, and am now 22 years into my second century.
Did you ever wonder how a watch can track which century it's in? No? Well I'm going to show you anyway, using the IWC 4-digit system found in many IWC and JLC watches. BTW this is set when the watch is built, and if you go crazy spinning the crown, you may go forward AHEAD of your current year, decade or century. If you do you have two options. Wait a year, or take it to your watchmaker and he can set it back. You can't do it yourself, because this system is a one-way-forward-only setup (like the odometer on your car).

Look at the right-hand gear on this diagram. The gray wheel is moved by the months indication of the watch. Once a month it turns one tooth (12 teeth, one year). 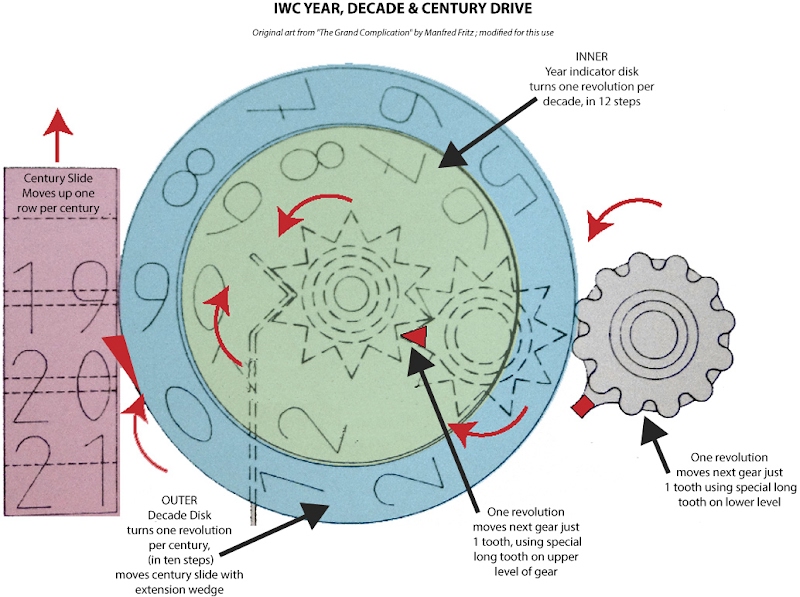 Here is an illustration from the book "The Grand Complication" from which I have extracted and modified this artwork. I recommend this book if you are nerdy enough to care about these kinds of things. The dark blue wheel at the top has the moon phases (described at the beginning of this story) and the dark blue wheel at the bottom controls the days of the month indications -- don't worry, I'm not going to describe that!
In the center you can see the row of gears that implement the year, decade and century display. 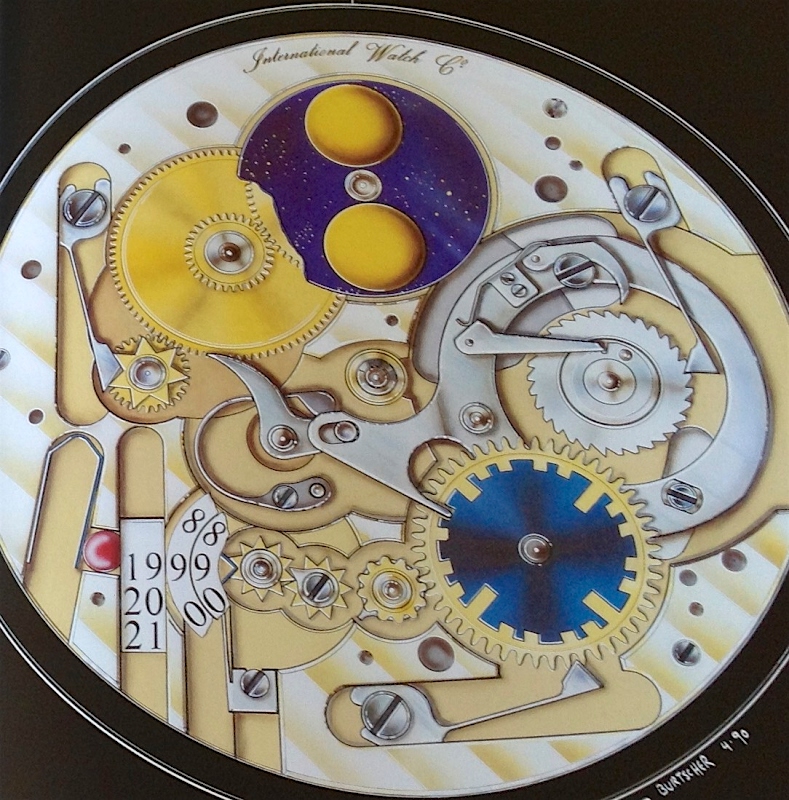 Is this watch obsolete after the 21st Century? Of course not, IF you save the box and papers. For inside the storage box, in a hermetically-sealed glass vial, is a slide to carry you on another 300 years. 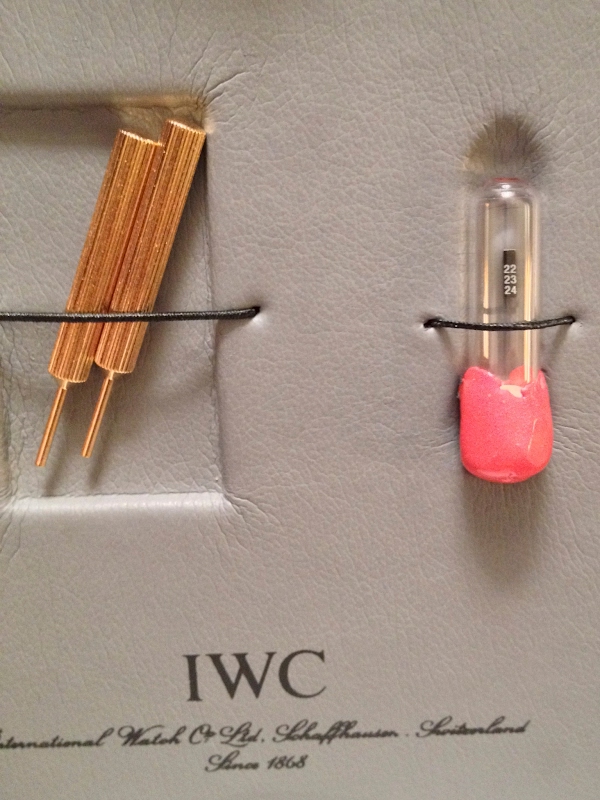 Here's a reward for your labors in reading this post.

These posts are absolutely fantastic!

By: TeutonicCarFan : September 14th, 2022-10:52
I love reading all these details, this is why we love these little machines!
login to reply

Thanks a LOT for taking time to share such posts, very interesting and emphasizes even further the genious behind complicated watches ! Much appreciated !