To conclude this examination of the Corps of Engineers pocket chronographs, I'd like to address a semi-ersatz version marked on the cuvette as "Examined By Vacheron & Constantin Genève".  As previously discussed, the delivery order for pocket chronographs was extremely ambitious and V&C never did fully complete the requested number.  While Nardin's ebauches were marked as V&C pieces, these "Examined By" watches did not extend that pretense. 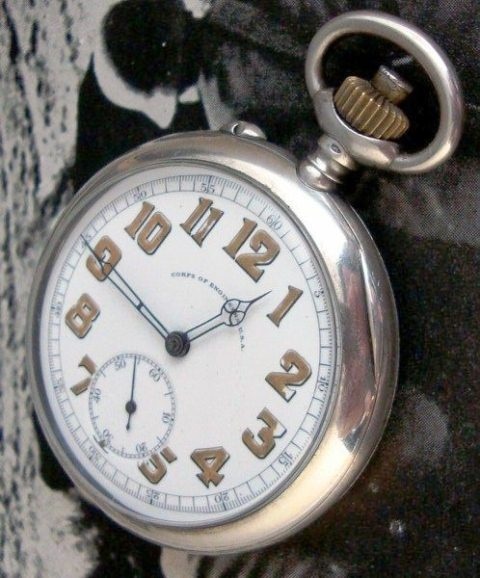 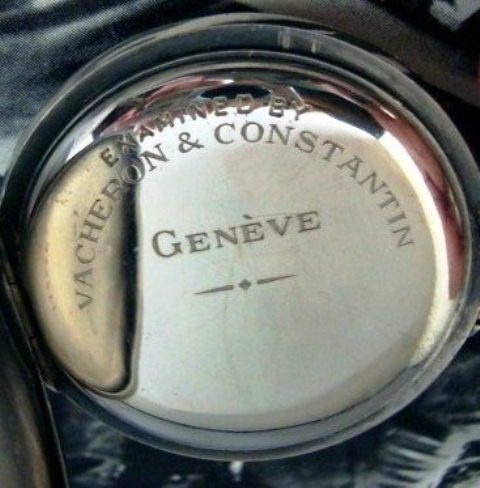 Even the dial, while conforming to other Corps of Engineers models in every other aspect, is quite obviously missing the prestigious appellation "Vacheron & Constantin".

On the commercial side, V&C had a long tradition of providing what they called "second quality" timepieces under a different brand name beginning with Girod-Colombey in 1819 up to the Trident brand in 1902. This practice evolved to supplied pieces marked "Fabrique Pour Vacheron & Constantin". These "Examined By" chronographs are clearly a military equivalent!

The silver cases are indeed provided by the same supplier as the "normal" Corps of Engineers watches; Huguenin Freres (HF). They seem to be utilizing excess stock as the EXAMINED BY script appears squeezed into position above Vacheron & Constantin as an afterthought; not even of the same gothic style.

It is the movement that gives it all away. Bearing the trademark of Valjoux, the caliber 42 is an adequate workhorse. Taking the "Examined By" label at face value, one assumes that some sort of post-production quality inspection was undertaken to assure the military recipients that each timepiece was worthy of it's important tasks.

My lingering question is whether these "Examined By" versions were counted in the total production numbers demanded by V&C's contract with the American Expeditionary Force? I suspect so...