May 12, 2019,15:28 PM
WatchProSite Moderator Patrick_y has another passion outside of horology and automobiles.  And those are Fountain Pens!  He introduces WatchProSite readers to a post about the Graf Von Faber Castell 2019 Pen of the Year celebrating Samurai.

“The pen is mightier than the sword.”  It’s an old cliché, but it’s true.  In today’s world, wars and trade agreements are declared with nothing more than a stroke of a pen or a few button presses on a computer keyboard.  Think about it...  Today, the world's most powerful actions are set into motion with a pen.  Nobody goes into a boardroom with a sword. 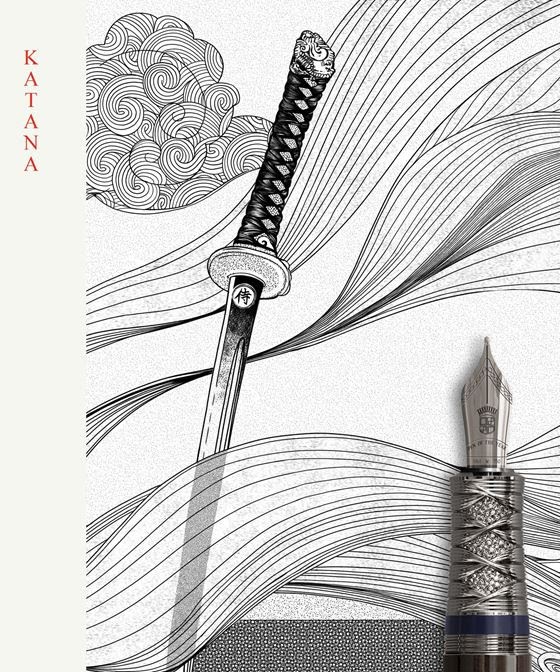 The handle of the pen is especially meaningful. It imitates the grip of the KATANA which is wrapped in stingray leather and silk thread.

Samurai, is the word for a noble Japanese warrior who is loyal to his lord.  Samurais fight for their lord not as hired mercenaries, but as men bound by honor.  In the story of the “47 Ronin” a Lord Asano was insulted and tricked by another Lord Kira to act in an undignified way.  Lord Asano was forced to commit seppuku (suicide by disembowlment) to atone for his undignified behavior.  However, Lord Asano’s Samurais knew that their lord was the victim of a plot by Lord Kira; they became leaderless samurai or “ronin” after the death of their master.  The 47 Ronin would then bide their time, patiently waiting for the opportune moment to take their revenge on Lord Kira years later.  After they took their revenge, the ronin, restored as Samurai, committed seppuku themselves. 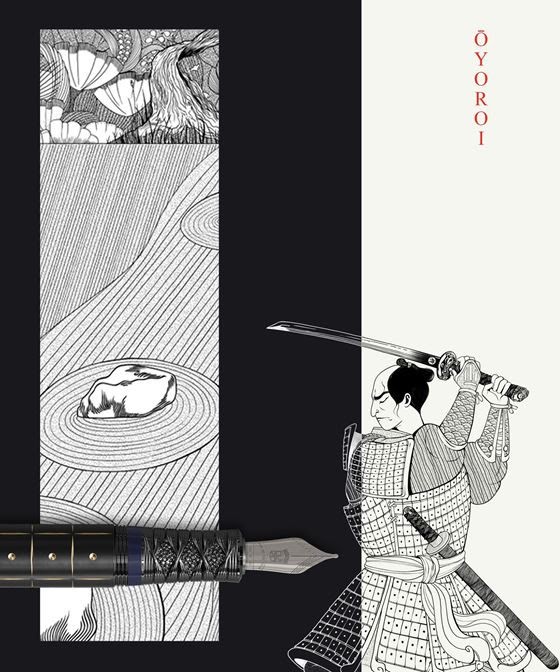 The pen is piston filled, meaning that it has a piston that moves up and down its barrel, when it moves up, it sucks ink into the barrel as it draws ink from the inkwell.  A transparent window shows the liquid ink (above in blue ink) moving inside the pen.

It’s rare today to see men with honor such as the brave and idealistic Samurai.  Graf Von Faber-Castell, the luxury writing instruments manufacturer, has decided to celebrate the Samurai in its annual Pen of the Year special edition. 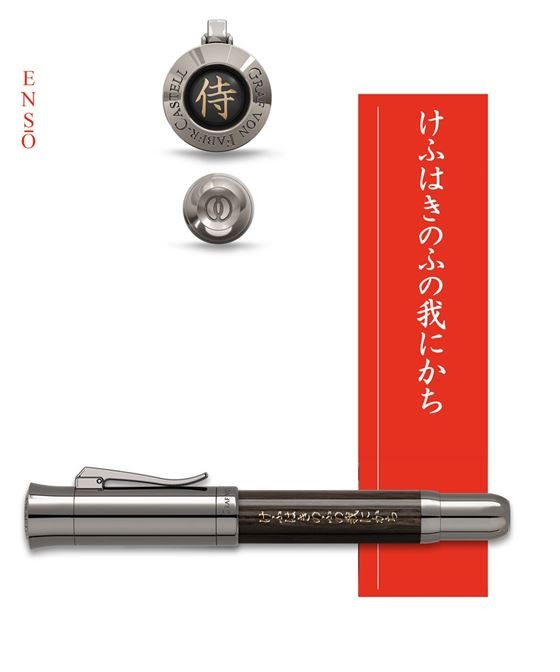 The fitting quote is, "Today, I win against myself of yesterday" is by Miyamoto Musashi an expert in swordsmanship.

Offered in two Fountain Pen Editions; the Black version is limited to only 330 pieces worldwide and costs $5400 USD.  The Ruthenium version with a magnolia wood barrel is limited to 400 pieces and costs $3900 USD.  I find the black version stunningly beautiful, and a powerful pen. 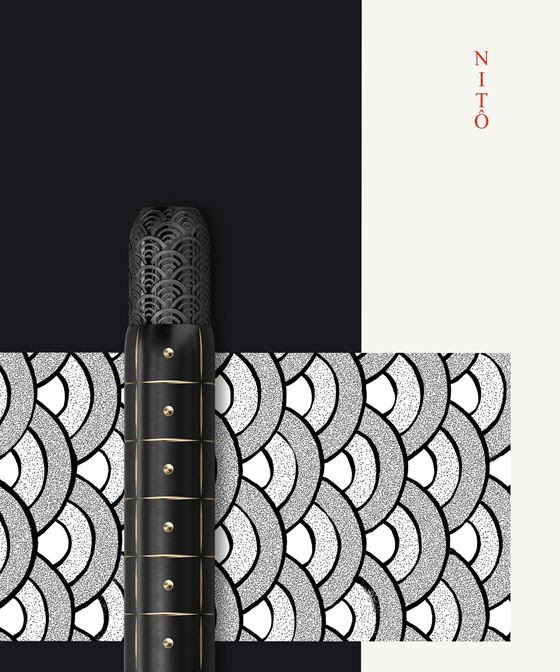 The wave pattern symbolizes calmness and tranquility and is a common theme in Japanese history.

It's rare to see a limited edition fountain pen with a theme that is so well executed.  Many of them are simply executed in overly elaborate designs and colored differently from one year to another.  This particular limited edition was well researched and thoughtfully presented.  With only a total of 730 fountain pens for the entire world in both editions; there is no doubt that this pen will sell out quickly among Asian collectors and Western collectors who have an affinity for Asian culture.  Overall, as a collector of writing instruments for over twenty years, I seldom see an edition that distills so much about the subject into a micro canvas of a pen.  If you can regard pens as a work of art; I highly suggest you consider this pen, put it in a shadow-box picture frame, and hang it up on your wall as a work of art.  Break the glass in case of emergency when you need to sign an important contract!

Please enjoy photos of the unboxing of the Ruthenium version below. 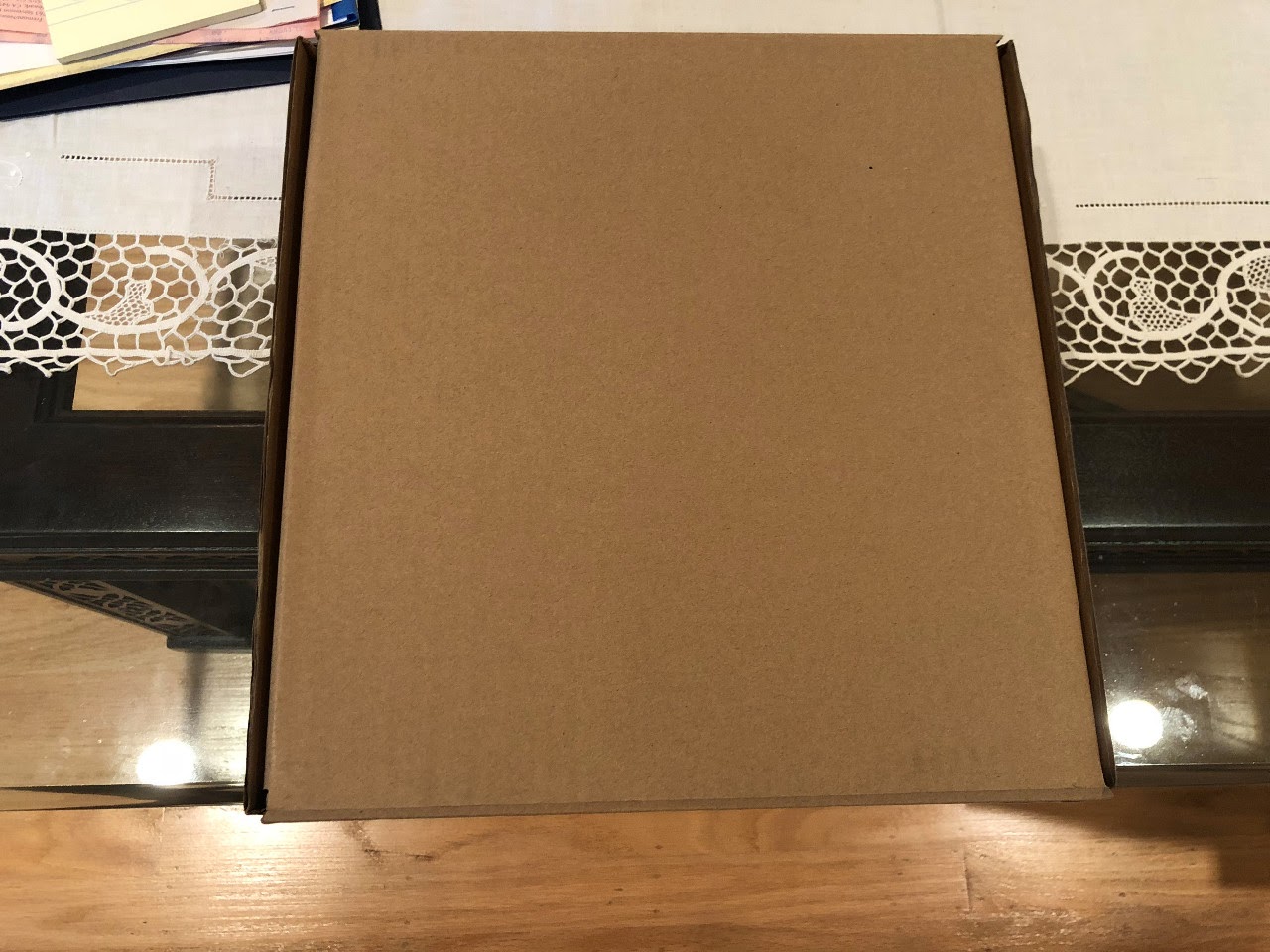 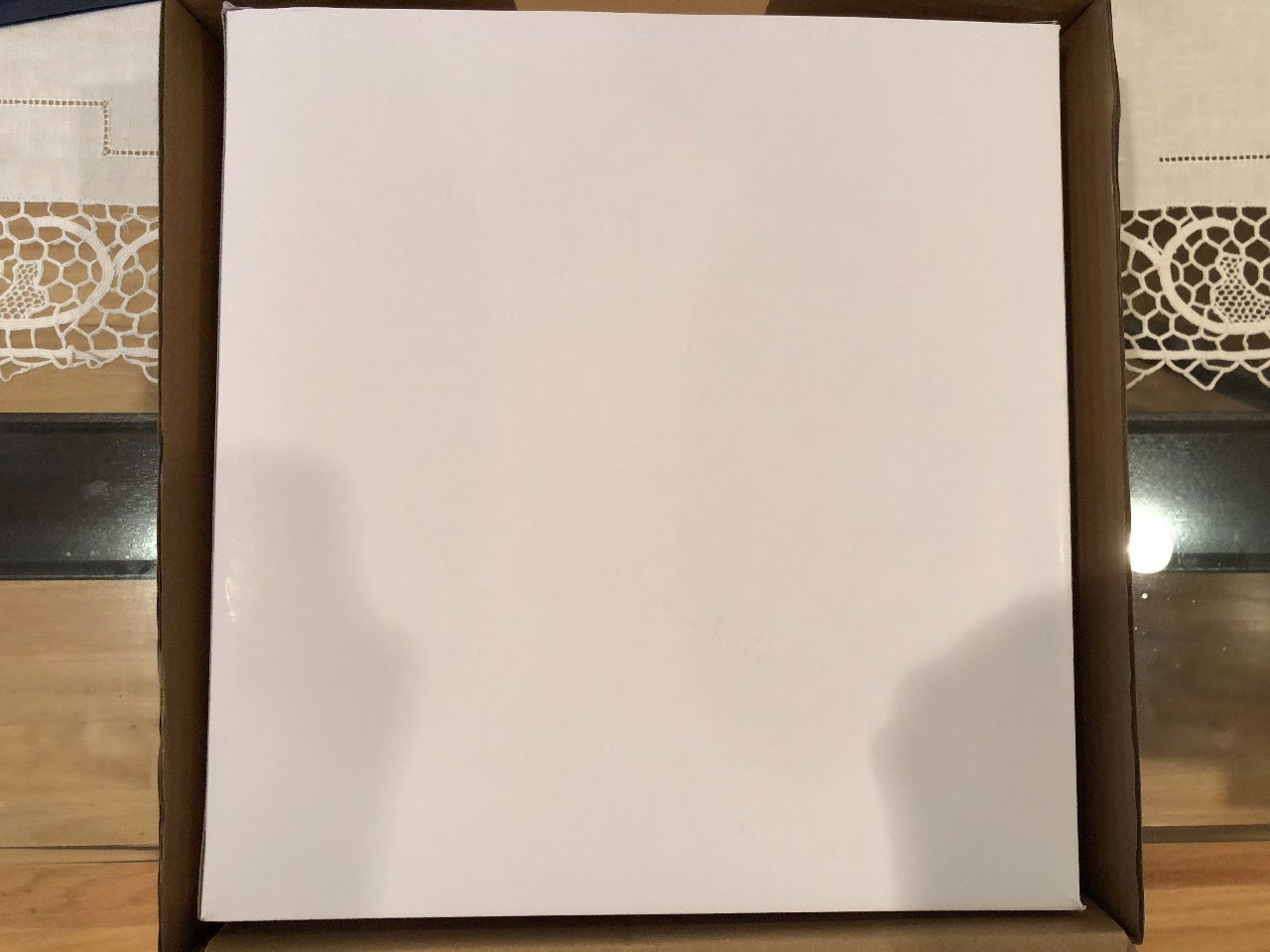 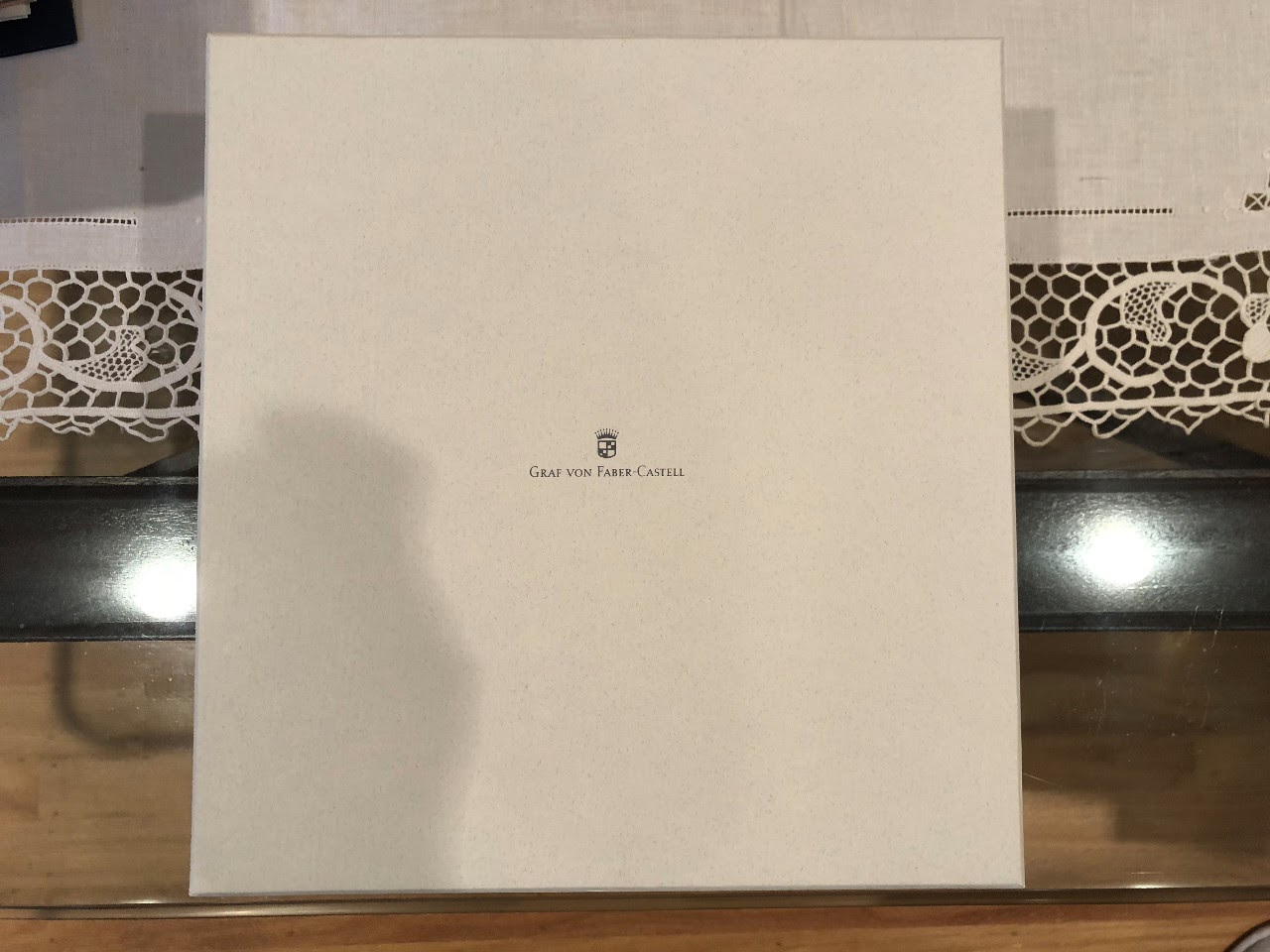 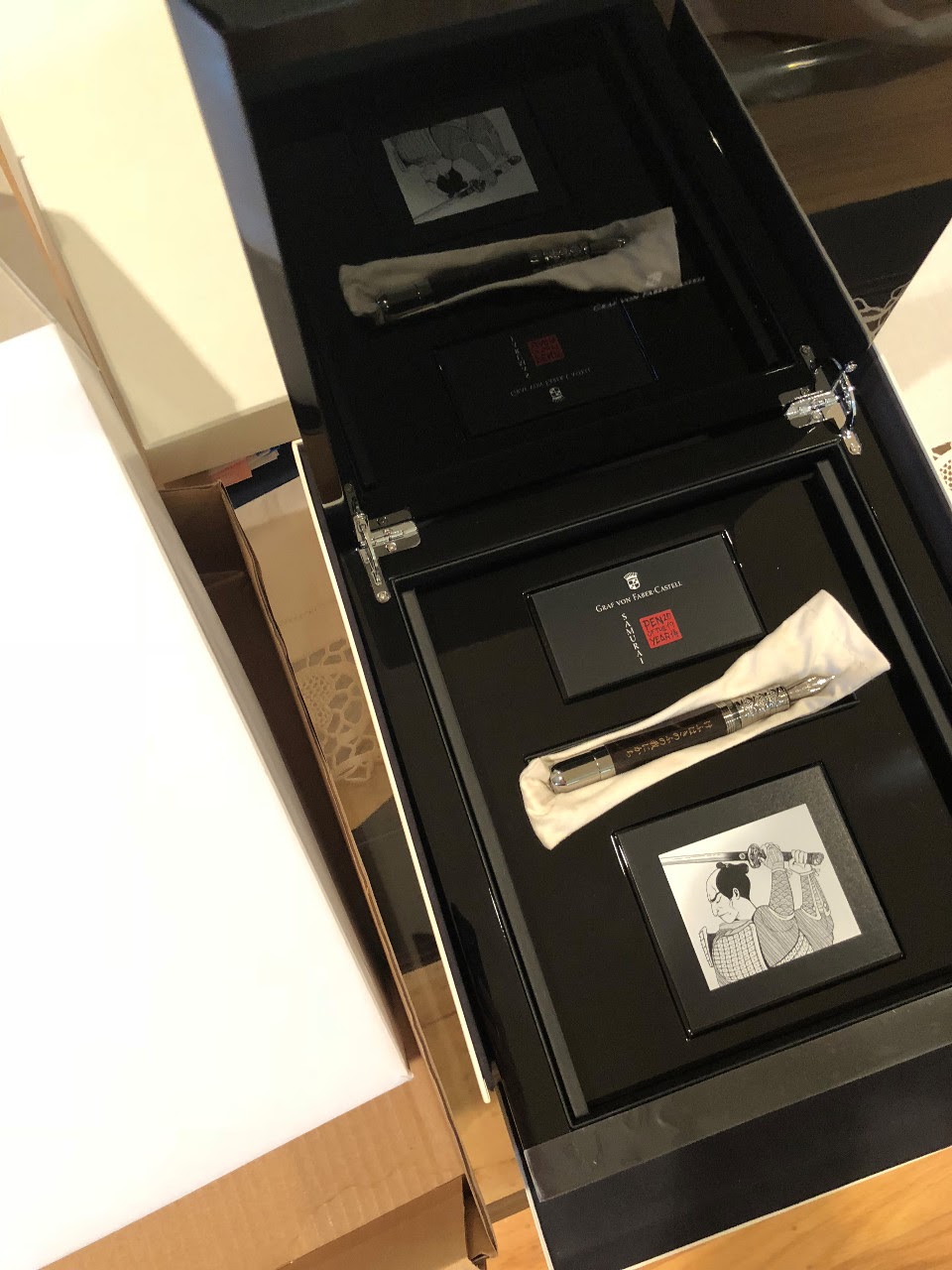 Black piano lacquer box.  Four layers of boxes is the perfect amount of justice for this impressive pen. 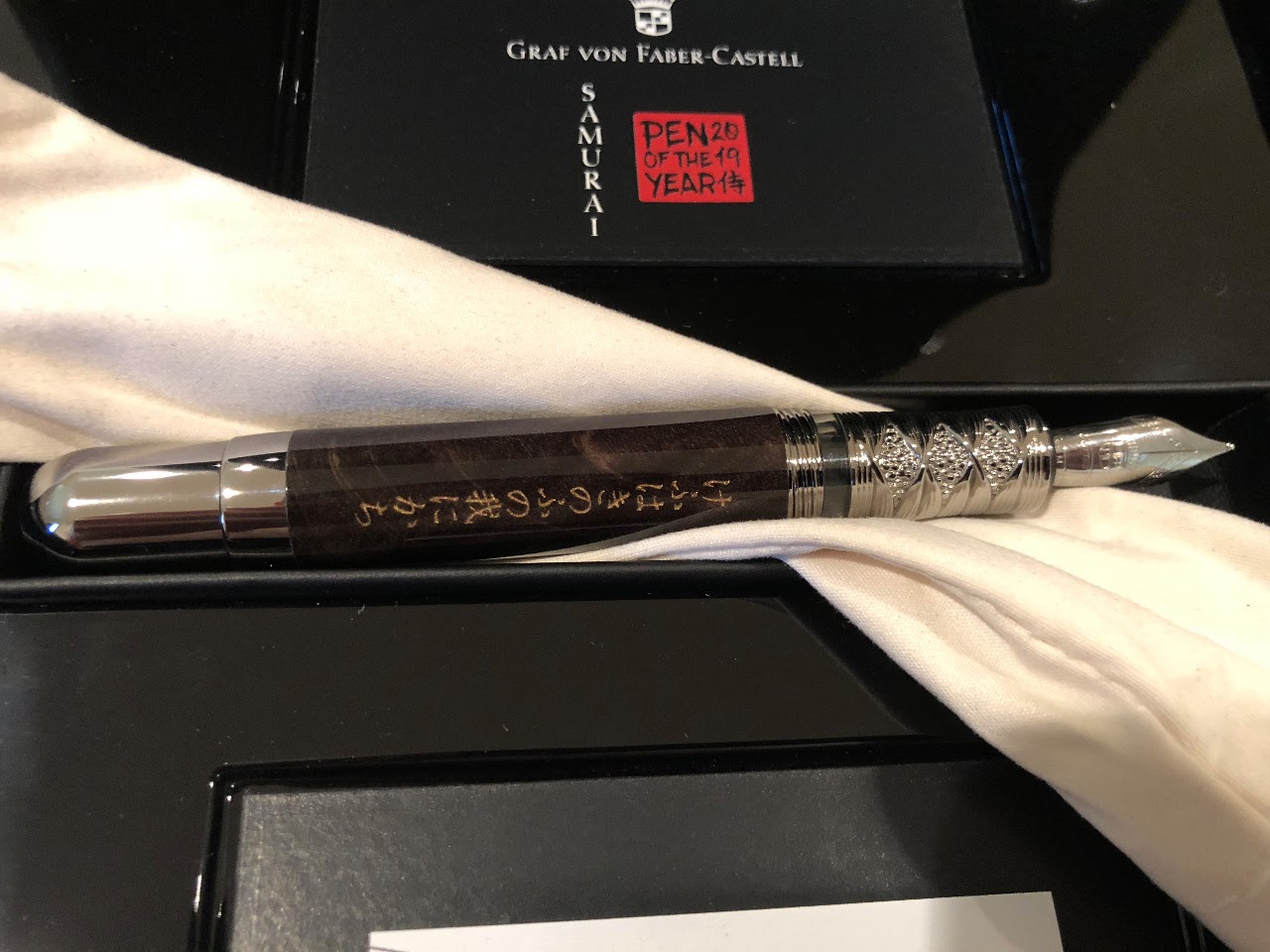 The barrel is in beautifully polished magnolia wood.  The engravings are inlaid in gold. 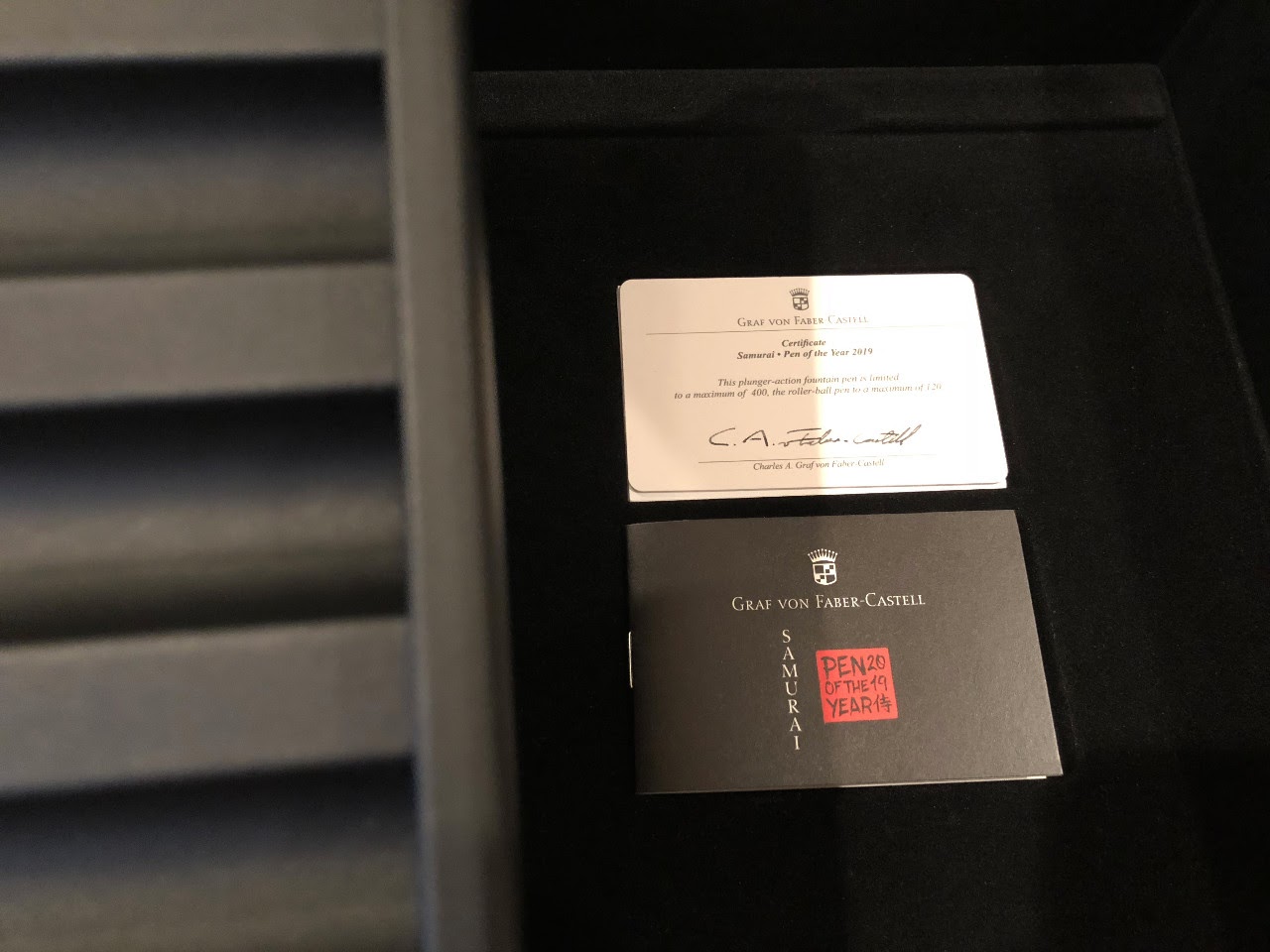 Guarantee papers are at the bottom tray of the box.  There's also a six pen tray so you can store other beautiful pens in this beautiful pen box that will rest proudly on your desk.  Your colleagues may assume this beautiful box is a cigar humidor until you open it and they will realize it contains beautiful pens. 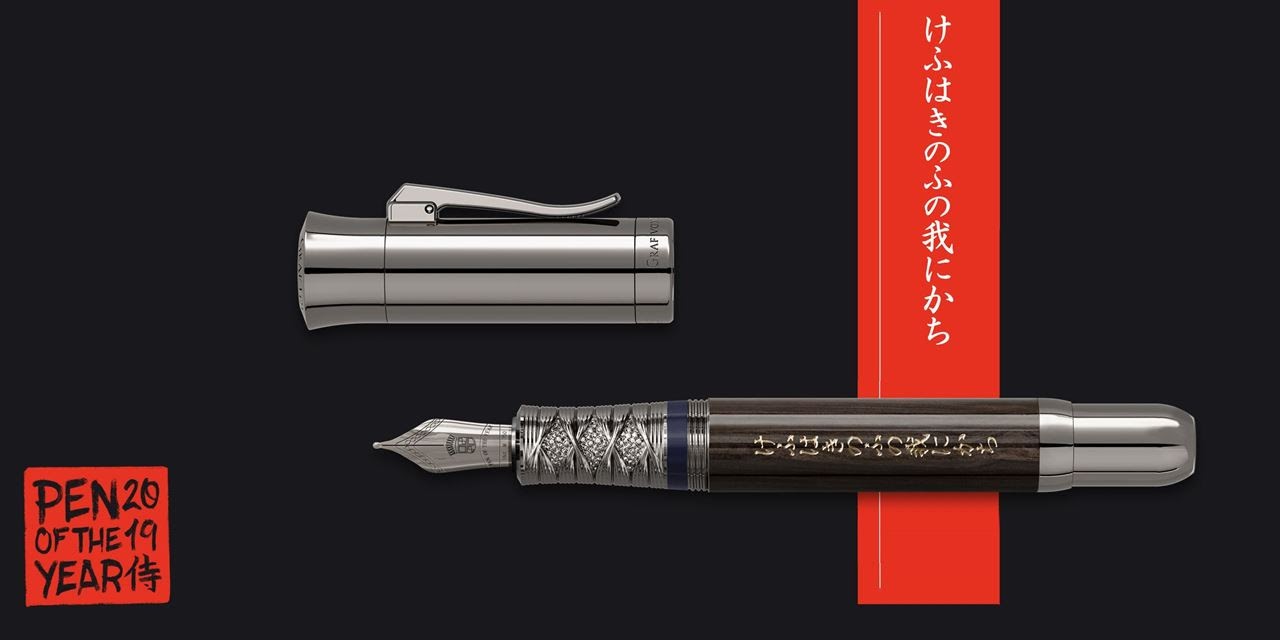 By: patrick_y : May 12th, 2019-15:28
WatchProSite Moderator Patrick_y has another passion outside of horology and automobiles. And those are Fountain Pens! He introduces WatchProSite readers to a post about the Graf Von Faber Castell 2019 Pen of the Year celebrating Samurai. “The pen is migh...
login to reply

By: Adamska : May 12th, 2019-16:48
is truly the best looking fountain pen I have ever seen! Gorgeous piece of art. This meme is the only image evocative enough of my feelings.... ...
login to reply

Thanks for the review and photos...

Love this pen, have it in Classique :) myself just love the blue color :D and hints of Le Petit Prince :) [nt]

Very nice pen! My latest Montblanc was the Borghese piece.

By: SALMANQ8 : May 12th, 2019-17:44
Big Congrats on the Great Faber Castell Samurai, what a wonderful pen. In my past life I used to collect fountain pens. As pieces of Art they do give a lot of satisfaction. S
login to reply

Thank you Salman! We seem to have a lot of similar tastes; from cars, to pens, to watches! [nt]

Beautiful pen, and an interesting packaging :) but hoping to see her in person to get a better view, I've become very biased to Pelikan :D and spending that kind of bling needs to be seen in

You may find it hard to believe...

By: patrick_y : May 13th, 2019-14:28
You may find it difficult to believe, I actually don't own a Pelikan pen. I mostly own Montblanc pens. I hear Pelikans have a wetter nib than Montblancs. Definitely ought to try them sometime. I'm definitely a big fan of the Pelikan designs.
login to reply

I don't think its hard to believe at all :D my second fountain pen was a Montblanc and had it not skipped I think I would have been in trouble and added more.

By: Rogi : May 14th, 2019-06:10
Now it has settled down (Montblanc Le Petit Prince Classique) and is fine (I suspect it had baby's bottom) the writing is comparable, I have the Montblanc with a medium nib and Pelikan (M800 Renaissance Brown) on Extra Fine Nib. The Pelikan writes smoothe...
login to reply

Superb, Patrick. This fountain pen is superb. Congratulations. I hesitated to open your thread because pens are a dangerous attraction on me. ;)

You see what you did? Here are some I am thinking about...

You know me, I vote for the Guggenheim piece. I always liked that piece. [nt]

I am totally crazy about that one, too. [nt]

Thanks for sharing Patrick

By: traineract : May 13th, 2019-00:15
Pens are dangerous. I know it's another slippery slope. But what you've shared is really tempting me
login to reply

Thank you for reading!

By: patrick_y : May 13th, 2019-14:57
It is indeed a slippery slope. I recently was wandering around in Los Angeles and stumbled into a nice art gallery. Those can be very slippery slopes as well. Lots of slippery slopes. Especially on this website! Besides pens and watches, what else capture...
login to reply

By: traineract : May 15th, 2019-08:10
I think thanks to the great influence here, I'm also starting to expand my interest into the finer things in life like art and jazz. Recently I'm also picking up on classical music. Very much lack the rigor in these side tracks, I really must find a place...
login to reply

Good luck to your pursuits!

By: patrick_y : May 15th, 2019-18:36
Art, jazz, classical music... All very noble and fun pursuits. Ever see yourself owning a famous violin made by Strad in Cremona? Ever see yourself collecting concert pianos? Collecting original scores of music hand-written by a famous artist over a centu...
login to reply