Jan 13, 2018,15:22 PM
Imagine the opening scene of a movie set . The location is the Hadron Collider in Switzerland. The actor is Benedict Cumberbatch playing the role of a scientist. He is wearing a crisp white lab coat. He walks into the lab and raises his arm and pulls back the sleeve of his coat.
He looks at his watch and this is what he sees 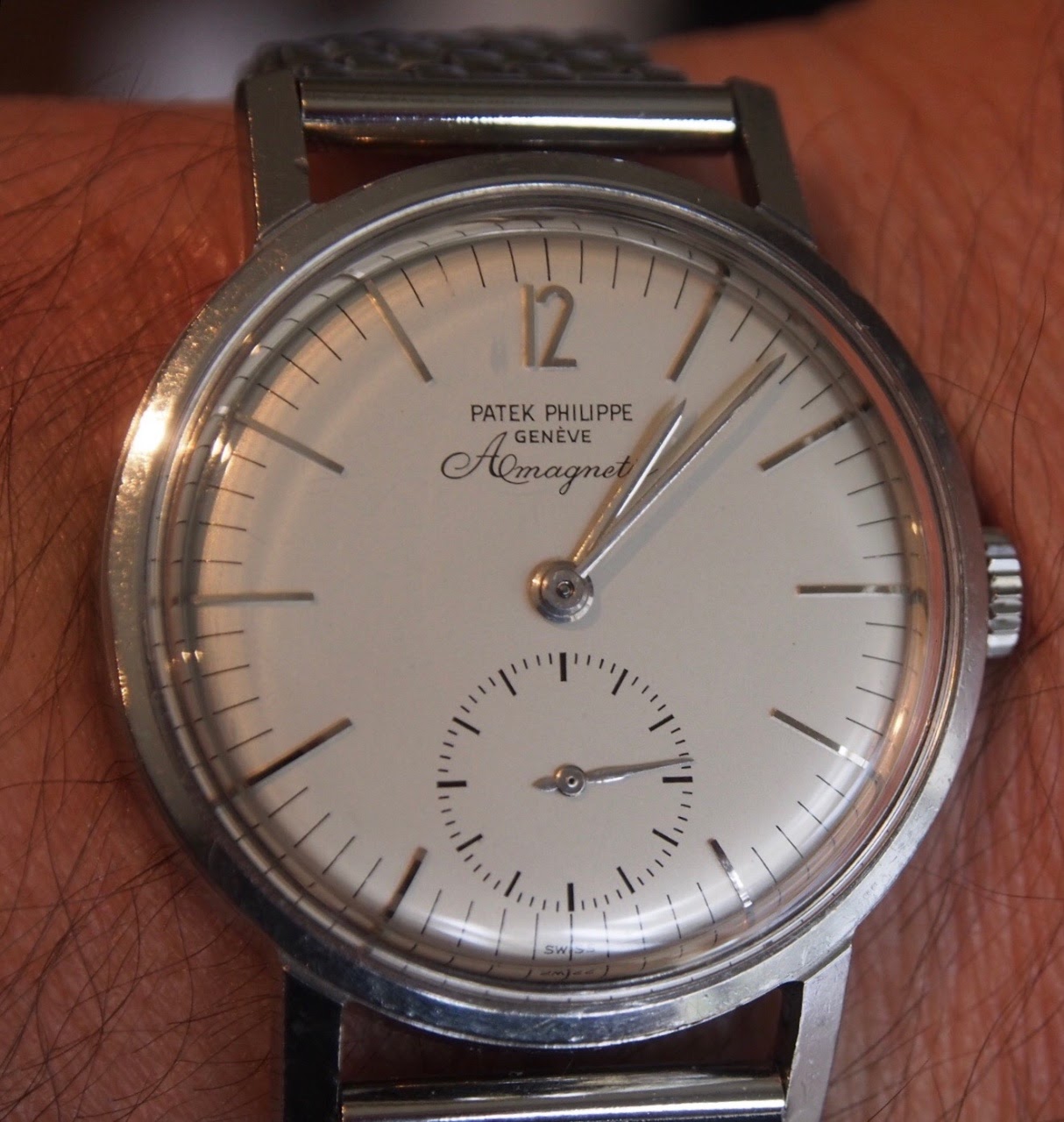 My first sighting of this fabled reference goes back many many years. I was still a neophyte collector and had never had my hands on a Patek . However even at that stage I was getting catalogues from Christies, Sothebys and Habsburg Feldman (as it was then , even before it became Antiquorum).  I had seen pics of these wonderful Pateks, Rolexes ,( mainly Princes and Bubblebacks- Paul New man was not even a salad dressing yet and who had even heard of Daytona.)
I was standing in line in a supermarket and even then I looked at everyone’s wrist. I had never seen anything exciting until…….  I spied this simple stainless steel watch on the wrist of someone standing in line in front of me.  I looked closer and saw three lines of writing – hmm not that common. He lifted his wrist and I  could get a better view of the watch . It was indeed the fabled ref 3417 Patek. Selling for about $7 000 at that stage. I almost thought of making him an offer but I just could not pluck up the courage and he disappeared into the distance. Both him and the watch never to be seen again.
I never saw one again for a long while but Roni  M( a fellow collector )had one and it spurred my interest. Prices had rocketed since the $7 000 but I thought with a few trade ins and some extra cash it may be possible.
Then I planned a trip to NYC and got in contact with a dealer ( Andrew Shear )  He had one for sale. He had always wanted one of my Princes – a rose gold ref 2771 with a beautiful GF bracelet. We agreed on a trade of some pieces  and some significant green and the deal was done in a NYC deli.  I had it.
The 3417 is a manual wind watch. Again not any movement but the moderately rare ref 27 AM 400.  I have two models and will inter change between pics of both. The only difference is the dial.  One has an original Gay Frere bracelet and the other has a beads of rice strap ( non GF)

Those in the know understand that this movement is the antimagnetic movement. Similar to the Milgauss from Rolex, the Ingenieur from IWC , the Railmaster from Omega and the Geophysic from JLC.
Movements are not similar but all are protected from high magnetic fields by a faraday cage construction.
The Amagnetic is protected to about 1200 Gauss , similar to the Milgauss
Case – similar round case .
The 3417 is  35mm in diameter – large by vintage standards
Thickness of the 3417 is 11mm thick to account for the Faraday cage 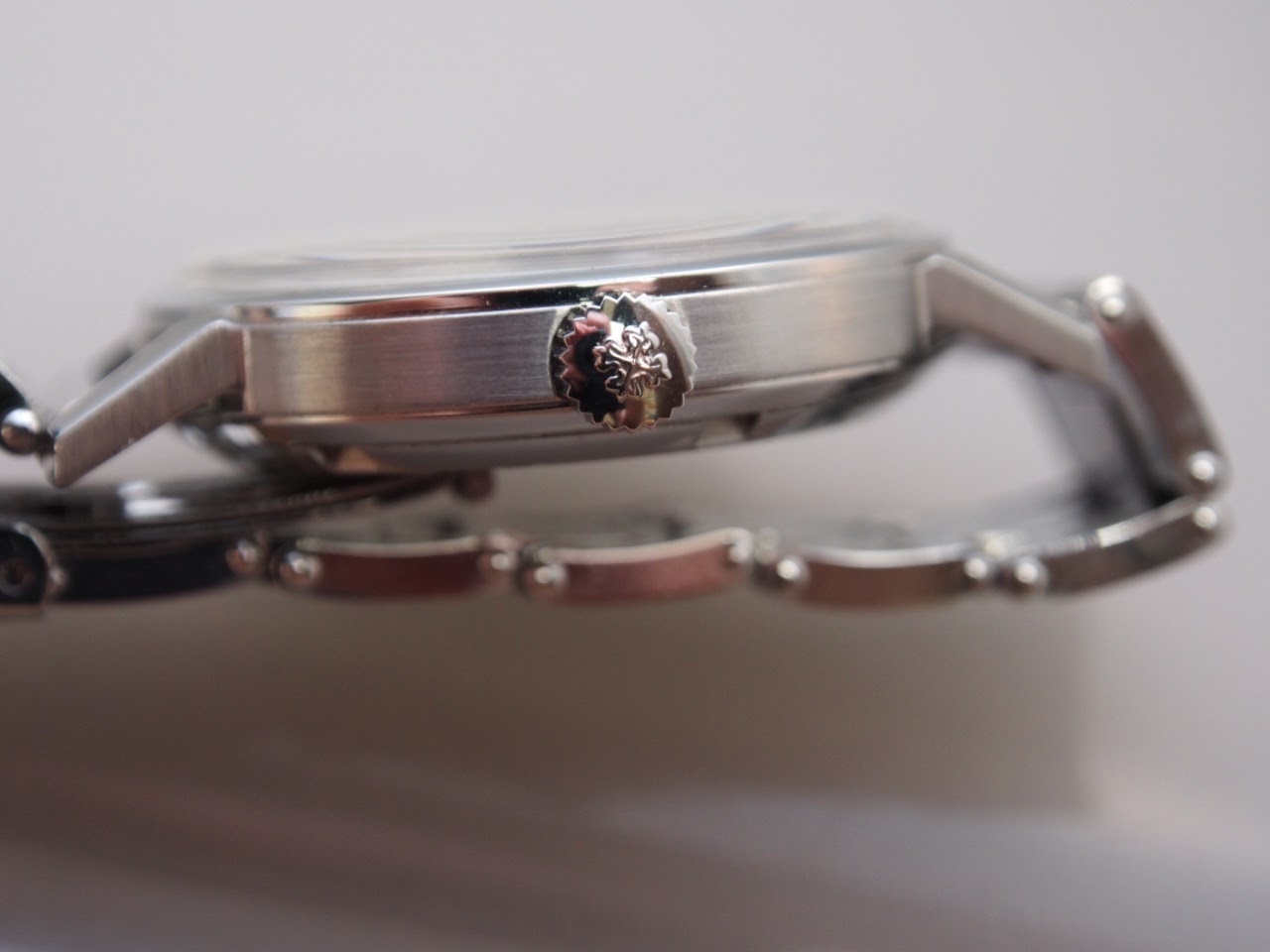 Lugs- the lugs are straight..  Interestingly they have a fine groove where the lug meets the case. A lovely touch. 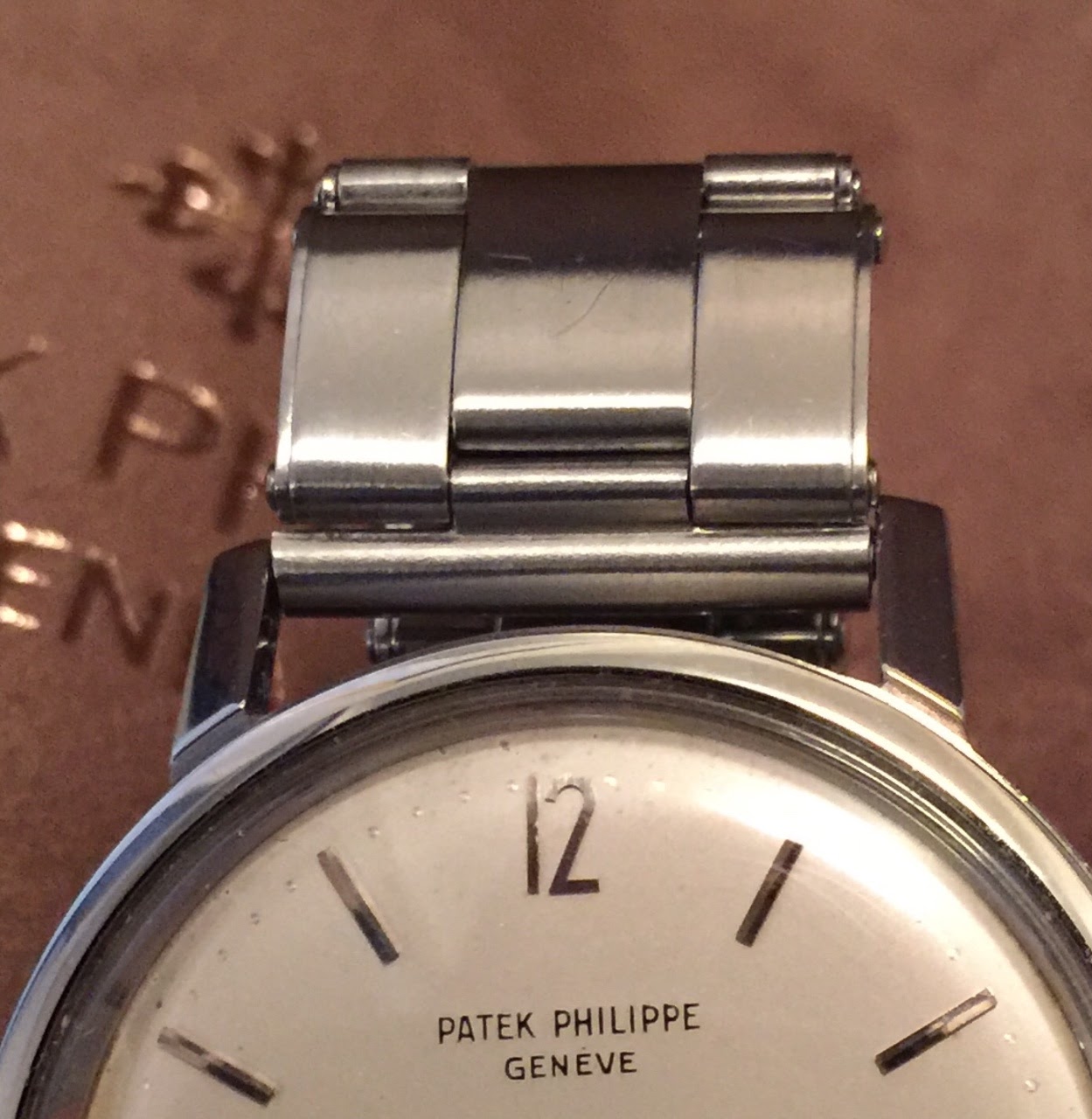 Dial. There are three main variants. Two have simple stick indices and the number “ 12” is elongated in an art deco fashion. 60-70 % had “amagnetic “ on the dial and the rest did not. I have shown both models.
The third dial is extremely rare with ?radium indices and ? radium numbers 3, 9 , 12. One was recently posted on Instagram by Andrew Shear.
I just love this pic and have included it. 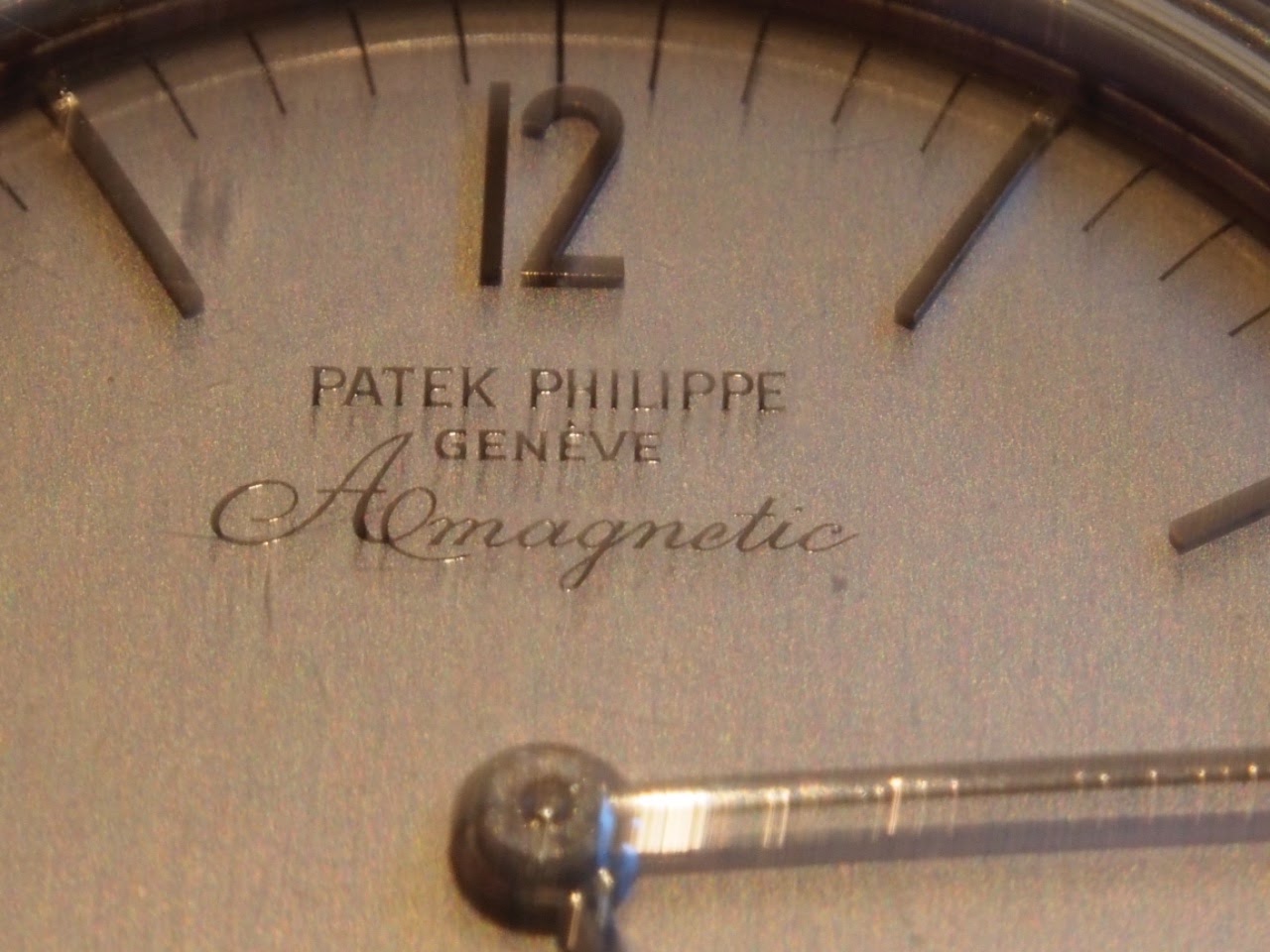 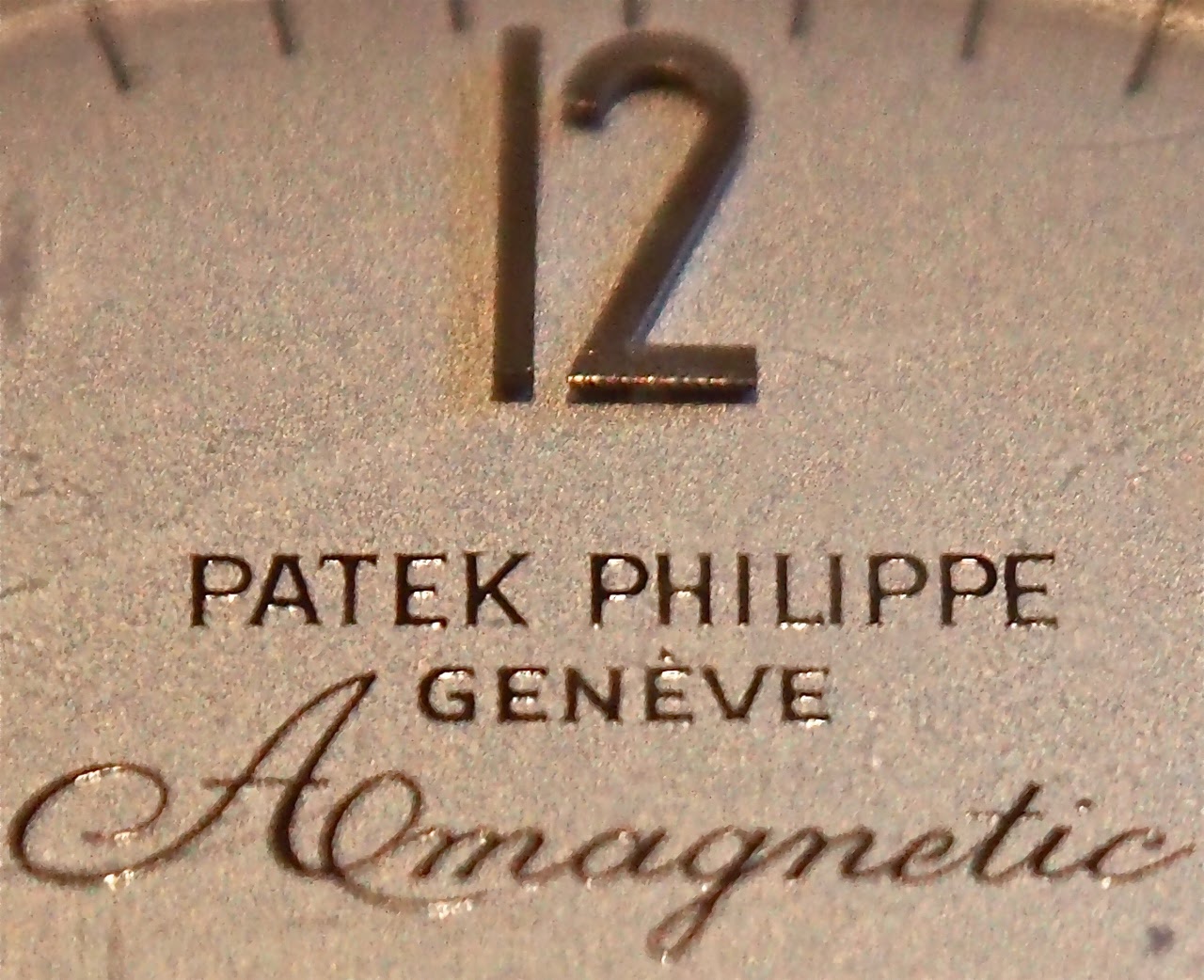 A comparison of the two common dials 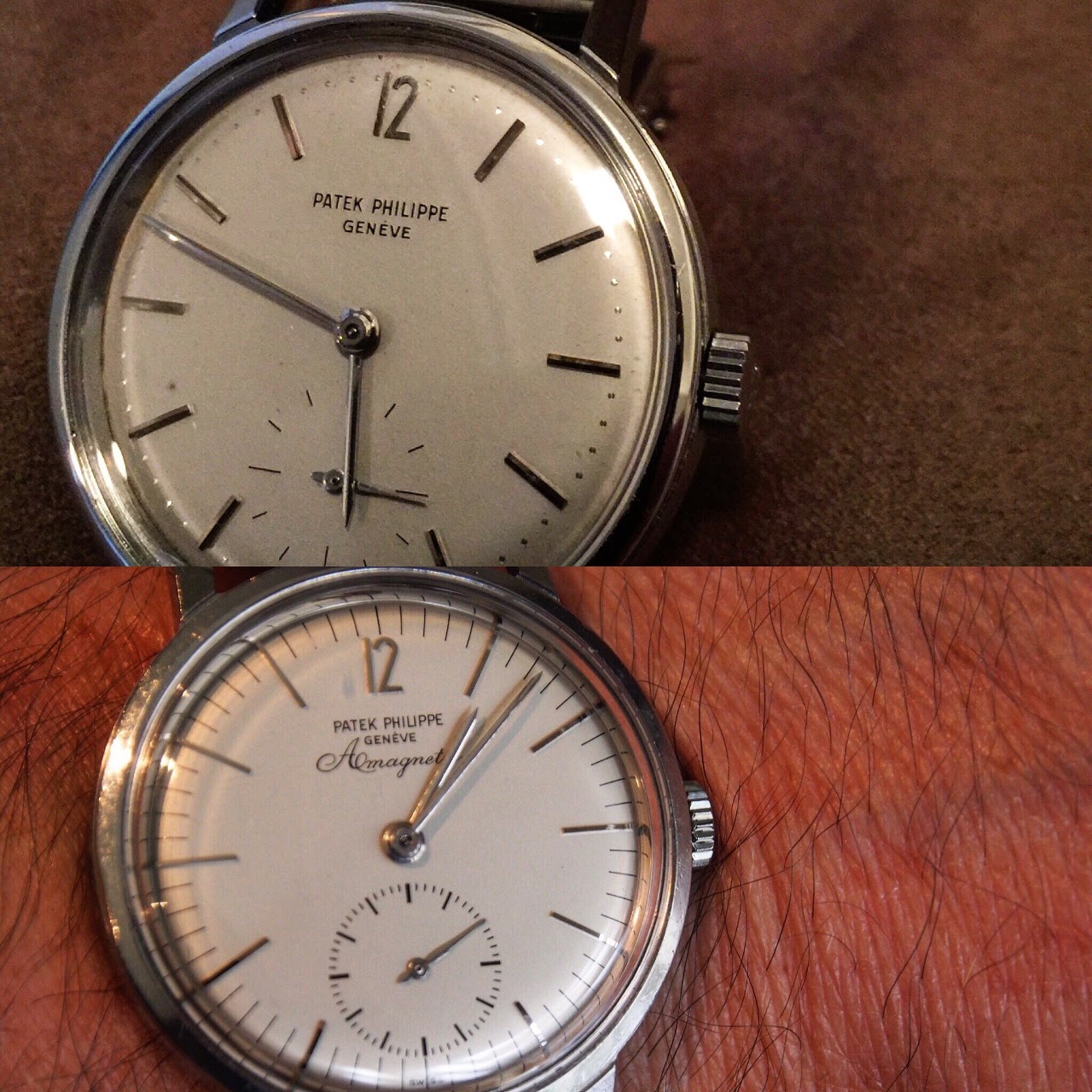 Crown-The 3417 has a lovely stainless steel crown with the calatrava cross embossed onto it. 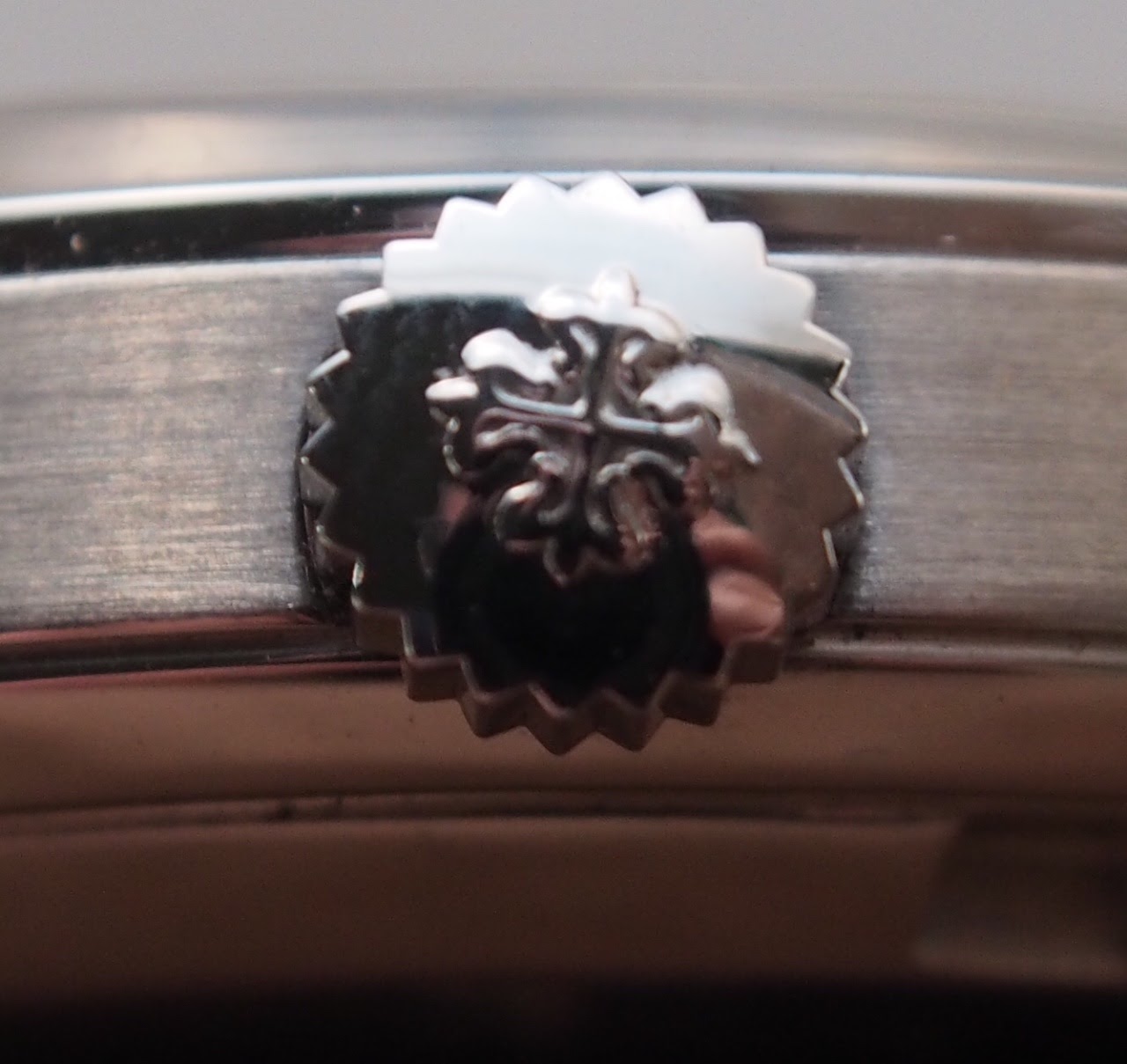 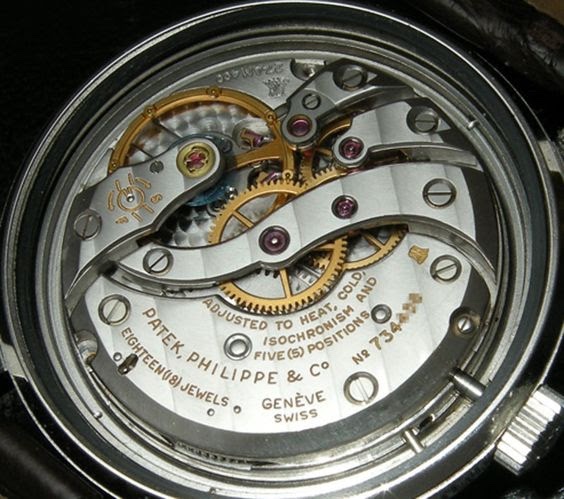 Please note that all technical information is courtesy of Marco Stanga . His treatise on the amagnetic is detailed and is a must for anyone interested in this reference. My thanks go to him for his help and information as well as his patience.

By: watch-guy.com : January 13th, 2018-15:22
Imagine the opening scene of a movie set . The location is the Hadron Collider in Switzerland. The actor is Benedict Cumberbatch playing the role of a scientist. He is wearing a crisp white lab coat. He walks into the lab and raises his arm and pulls back...
login to reply

By: runie : January 13th, 2018-15:34
Just a few weeks ago I had the opportunity to see a nearly as new example of this reference.... Really awesome and adorable!
login to reply

I saw the same one 😉 and I even had the chance to take a photo...

By: amanico : January 13th, 2018-15:50
Anyway, as you mentioned it rightly, the 3417 is one of these legendary amagnetic watches you quoted. A must have. And yours is wonderful. Great review, my friend. Best, and thanks. Nicolas
login to reply

me too I need one more for the one with non GF rice bracelet.... [nt]

Thank you for a nice review.

By: dr.kol : January 14th, 2018-00:12
I hope Patek will one day re-introduce the Antimagnetic Calatrava with a modern manual winding movement and SS case. That would be something. Best, Kari
login to reply

Thank you for a great review!

By: blomman Mr Blue : January 14th, 2018-01:13
Interesting to learn there were a radium dial for a Antimagnetic watch!? We saw many paradoxes through time... Shield from magnetism but radioactive...! Best Blomman
login to reply

Hi watch-guy , Thank you for a great review !

By: GLau : January 14th, 2018-08:54
Your photos are also fantastic and the post is very informative ! Cheers, Gordon
login to reply

By: watch-guy.com : January 14th, 2018-12:26
This is a reference that has to be seen in the flesh to understand the passion J
login to reply

By: itt : January 15th, 2018-22:33
Gotta love the 3417.... Can you please post a link to the radium dial version that you mentioned Andrew Shear posted on Instagram. I cant seen to find it ... having said that I know little about Instagram.
login to reply

Regrettably.....forum rules say that we cannot post links to watches that are possibly for sale [nt]

By: itt : January 16th, 2018-03:26
Andrew probaby sold it and deleted the picture...that will be why I cant find it. I believe Mstanga has a picture of my one in his review...
login to reply

Im not sure how to post pictures... as I said there is a picture of my radium version in mstanga's review (nt) [nt]