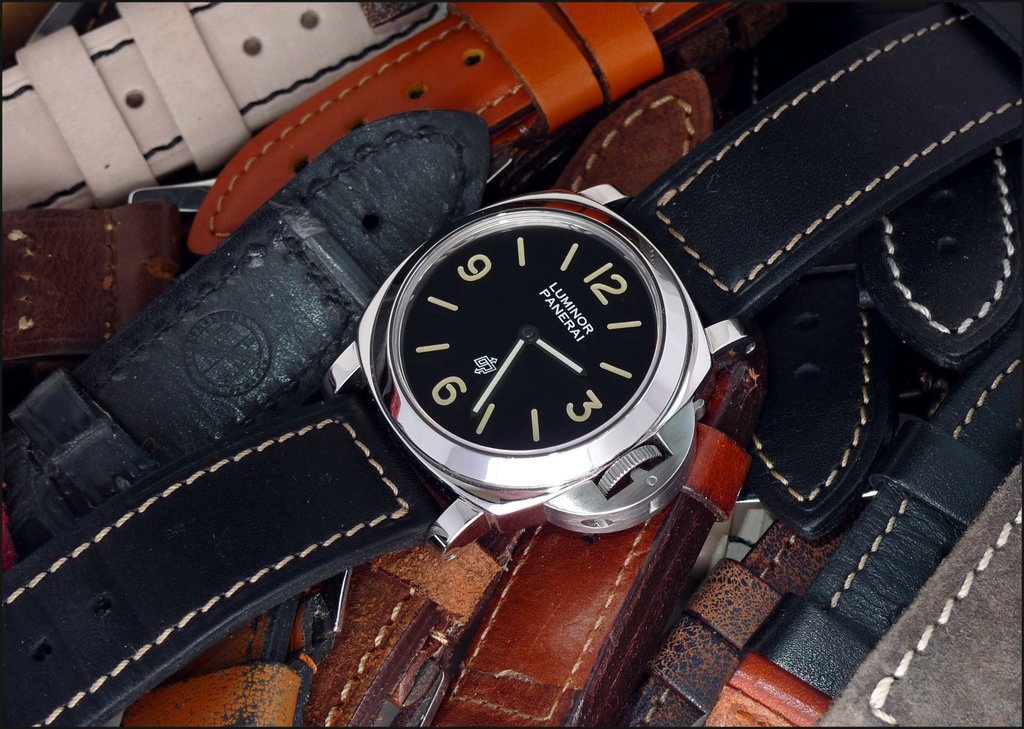 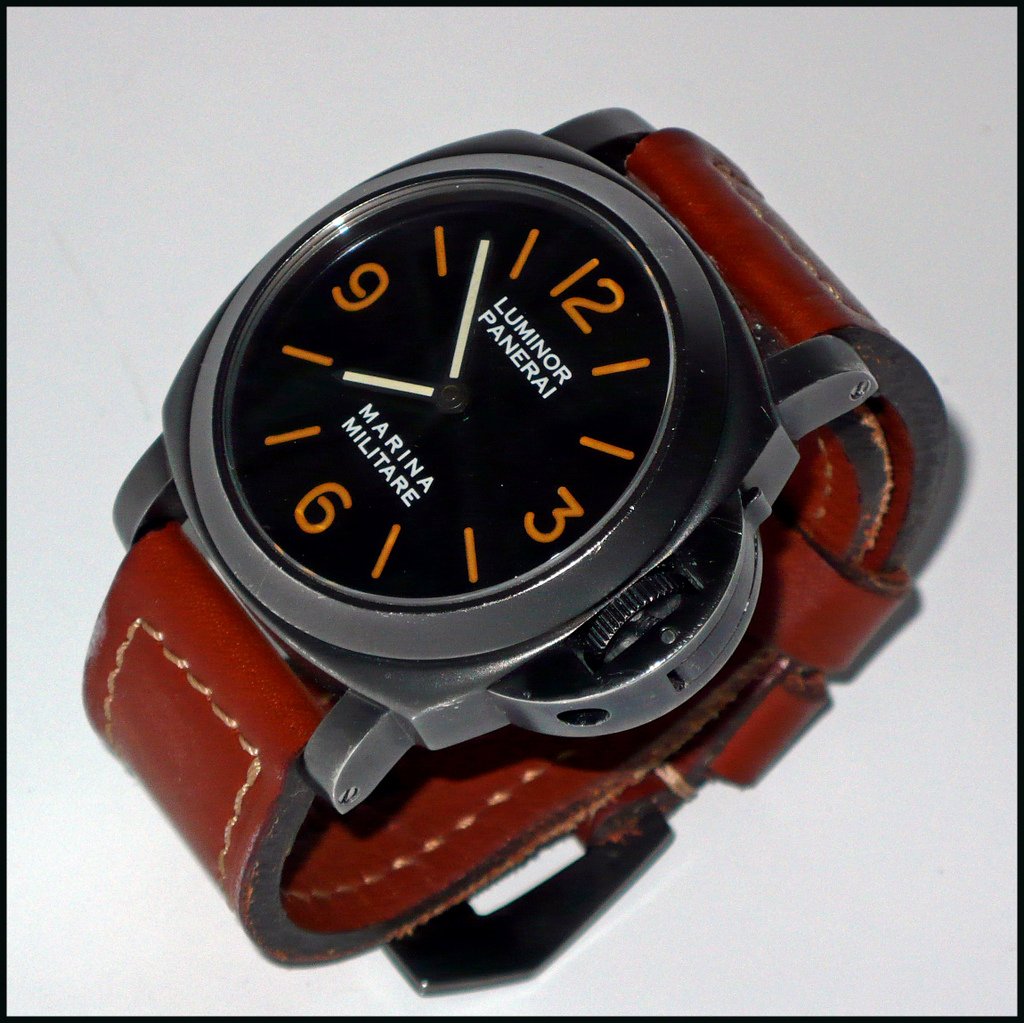 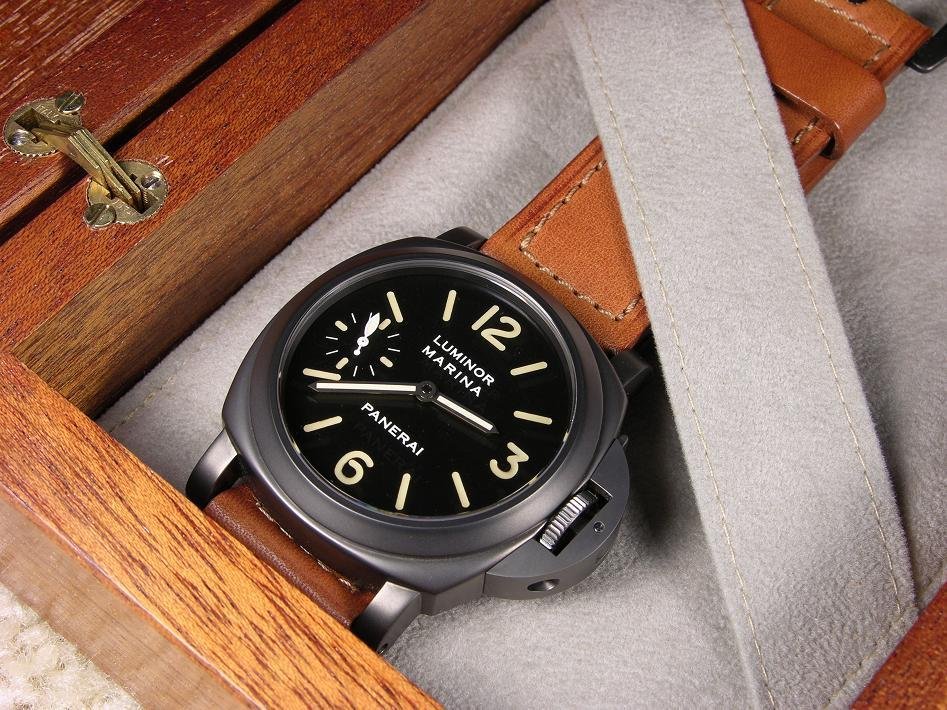 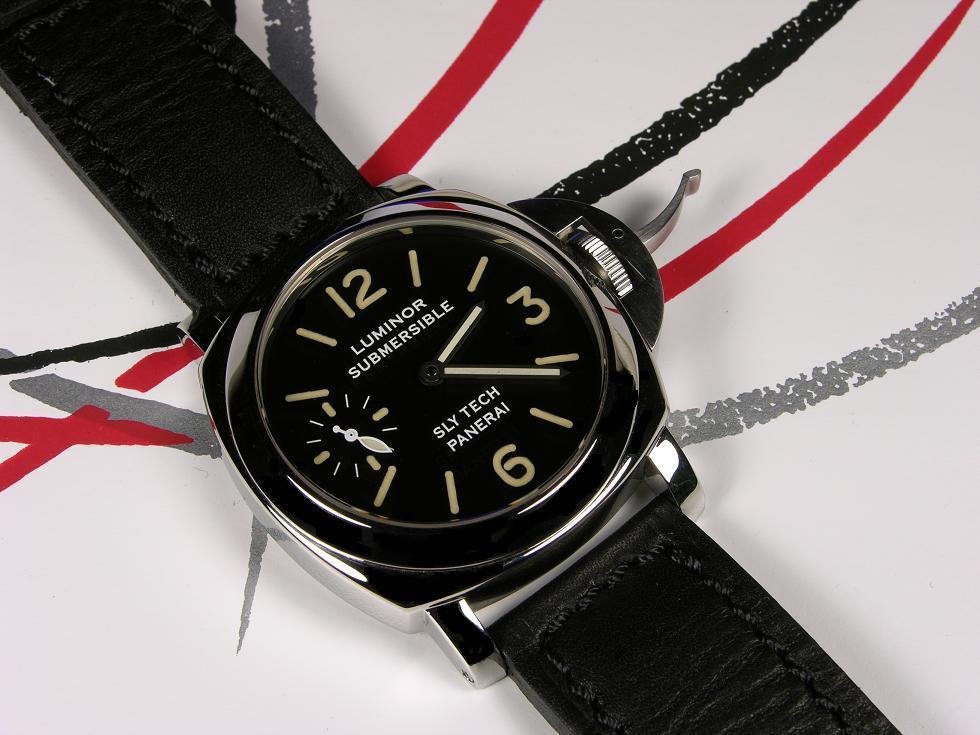 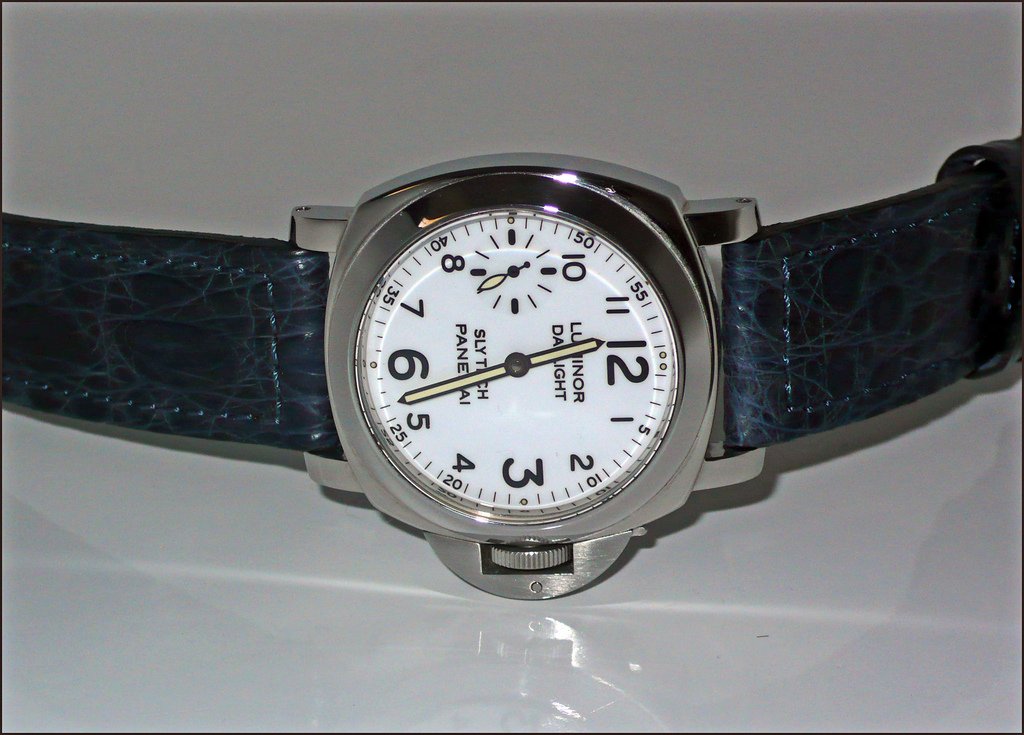 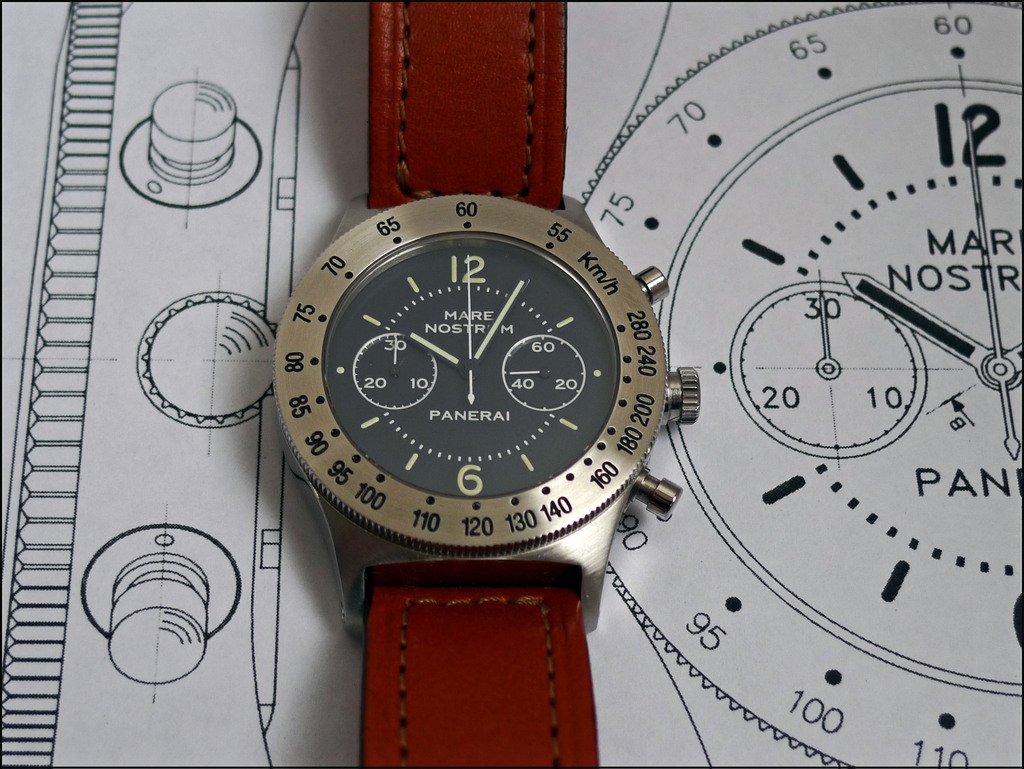 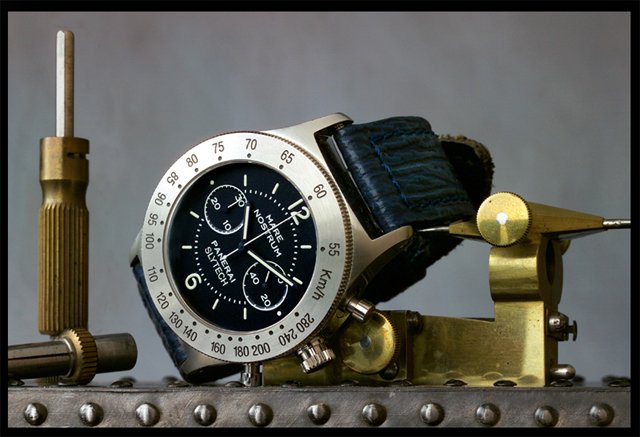 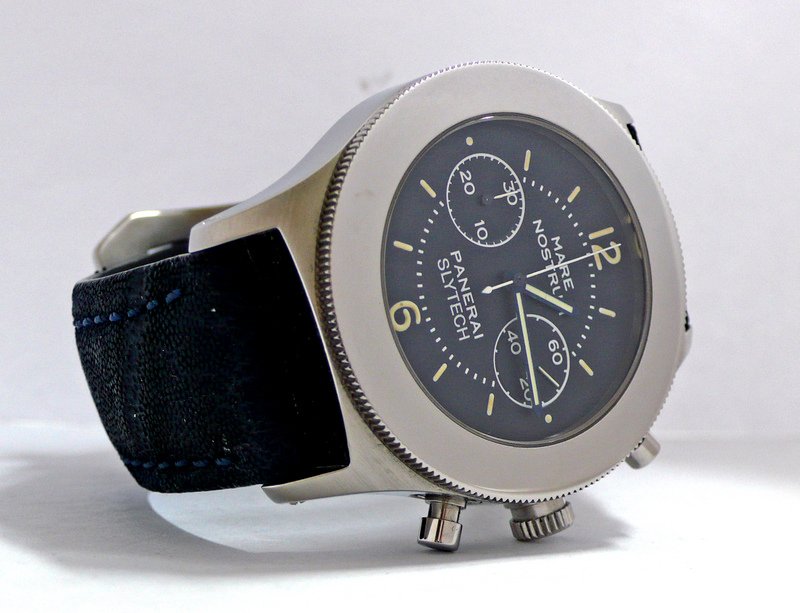 And the controversial Black Seal Slytech: 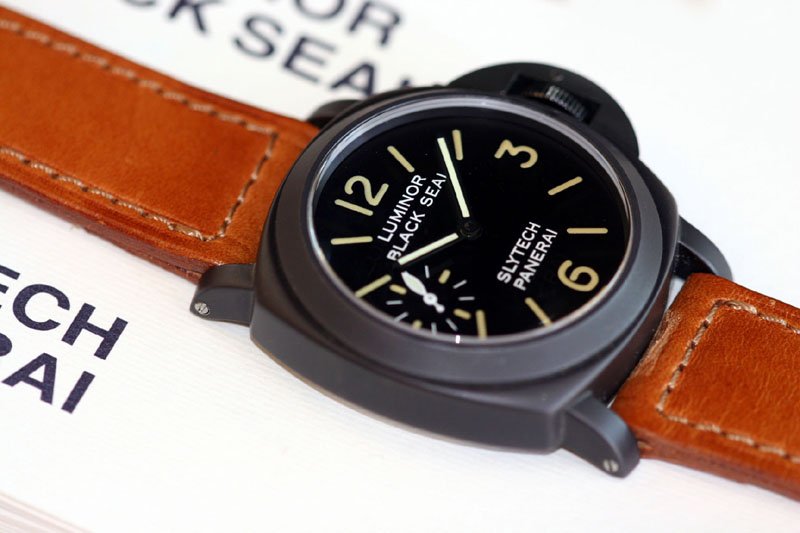 I must confess that each time I think of these watches, I have an Heart Beat...

Nostalgy and History are subtly and gently blended, here.

What is / are your favourite Pre Vendome Panerai watches?

I will start here:

The Logo, the Marina Militare and the Mare Smooth bezel are certainly my personal winners.

But if fantasy is allowed, there would be only one, the Black Seal Slytech... Well, I mean one of the very few authentic.

Let's see your paintings, Guys, and tell us all!

Looking forward to hear your takes on that topic,

Followed by the Mare Nostrum with a smooth bezel (not sly)

I expect Panerai will re-produce these 2 models, MN in wearable size (not 52mm) and also a small Egyptiano.

Thanks Nicolas for sharing all these beauties

The 360 is maybe the closer approach to the Pre V world, indeed.

As for new releases, a small Egyiziano, or a Mare 47 mm would also make my day.

But this is the Future, not the Past.

I think any of them would be a jewel in any collection, well, at least in my opinion.

I loved a lot the 2 watches you mentionned.

I love the simplicity of the dial..

Only "LUMINOR PANERAI" and the logo..

Combined with the fat tritium index..

Next will be the Marina Militare 202/A..

The simplicity is close to the logo.. Only it is using MARINA MILITARE wording instead of the logo..

4 lines could look like a lot of wording. But in person, combined with the PVD case, it's just beautiful..

To me the logo 201/a is the ultimate Panerai. If I were given the choice to own only one Panerai, I will not hesitate at all to pick it...

And I completely tend to agree with you on the Logo.

Exactly for the reasons you mentionned, + the fact that it was, with the Mare and the MM, the first ones to attend the re birth of the brand.

But the Logo, and the one I posted, which happens to be mine, has, therefore a special story.

See Poy's answer, you will understand.

Thanks for your very nicely written input!

It makes the watch so much more special.. And if in the future I will have the opportunity to get the logo myself (Im day dreaming here), I would want to buy it on a very special ocassion to make a special watch much more special.

But I had several times the possibility to see both of the Logo, matching and non matching, and I can tell you that what matters is to get the Logo, and what doesn't matter is to know if it is a matching or non matching specimen.

The Logo is above this kind of consideration, in my opinion, it is a Legend!

You put it very well, my friend, adding something special to an already special watch is the " creme de la creme "!

I've only seen the matching Logo.. I hope to be able to see them in metal side by side...

I seem to recognize it ;-) (picture below)


Recent time flies. Already it is about some 14-17 years ago, unwanted marvels then, today almost unreachable jewels for most, they all generate special emotions to all their owners.

My pick, truly all of them. 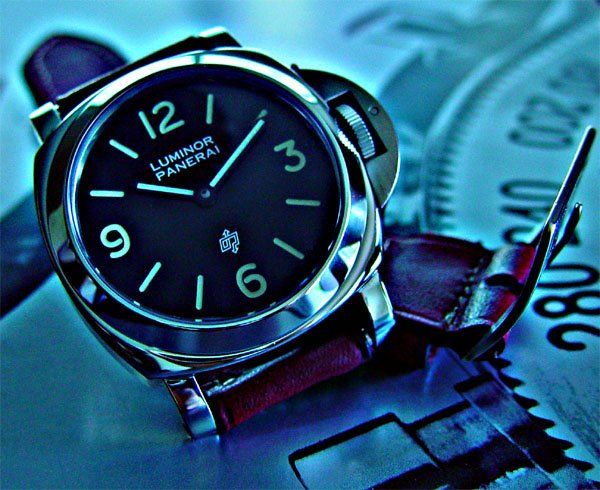 This Logo is familiar to you, my friend.

Still at home, or better, on my wrist!

I would like to know more about this watch, as I found no serious information on it till now...

I know part of the full story, but wait we are lucky one of our esteemed member did many of the legs works, let me phone him to get him to post it

It is an amazing and very interesting story, and I think he's the only one in the Panerai Community to know the making of on this very special and too ofen, sadly, dangerous reference.

first I have heard the "controversial" label...more info please!

each are so yummy with the T-dials...

And believe me, a very interesting topic.

I used to own the Black Seal Sly on the pic I posted.

We'll see if my friend accepts.

I hope you will enjoy it.

This is no doubt the controversial Pre-Vendome watch

This piece was first projected very early 1996, drawn and specified in mid 1996, final specifications in December 1996, re-specified & re-final drawings in January or February 1997 by Panerai in Firenze.  Delay and re-specifications happened because all Pre-Vendome pieces did not meet success expectations (not happening fast enough), already in financial difficulties, Panerai in Firenze wanted to minimize their cost of production and therefore wanted to ‘self’-produce or produce locally their latest watches.  Even if the Black Seal watch project was planned for production in 1996, commercially expected by the Panerai in Firenze agents for September 1996, to produce locally took some times to put in place and it was slow, thus explaining why the watch only saw the light of sun in late 1997.

All Pre-Vendome watches were produced in Switzerland by the Frères Guenat (Company Name: Montres Valgine), all but 5218-209 5218-210 5218-218 which are the very last watches specified by Panerai in Firenze, those last, had been produced in Italy, Coro Spa (Italy) for the cases, and by Fabiano Alessi ‘Croem’ for all fittings and adjustments, movements et dials were sourced by ‘Valgine’’s subcontracted companies.

After the acquisition of Panerai by Vendome, Coro (Italy) was initially chosen to produce the post Vendome watch cases, but past the first 500 Pre-A series cases, Vendome decided to end their contract and the company ceased its activities.

The 5 pieces 5218-218A Black Seal were in fact completed and released only in late 1997 Post Pre-Vendome era. A secret, a surprise to all but one, in Mai 1997 Panerai in Firenze had sold all their rights to watches and instruments to Vendome, this resulting that officially Panerai in Firenze which continued its other activities as Panerai Sistemi spa, could not officially accept delivery of those watches.  However and somehow someone at Panerai Sistemi took delivery of those pieces.  I believe that most of the 5 pieces were kept till the end of Panerai Sistemi spa in 2000 (1999/2000 ) then all the 5 pieces were sold.  Somehow 1 piece (probably even 2 pieces,) is with current Panerai (The CEO was photographed sporting one on wrist, photo somewhere on web), a private party purchased 2 pieces, one temporally stayed with the original recipient and I believe one was with the ex-Panerai distributor 1993-1997 (Gioie).

In 2002 (2001?) a Few Panerai enthusiasts were aware that some direct and indirect parties of the ex-Panerai in Firenze together with in the complicity professional parties as well a freshly established horological company were ‘producing’ some Pre-Vendome pieces. Even if partly assembled using some new old stock parts, none of those that were seen or discussed (often online) had the full original configurations, despite the resemblance and whatever certifications, they are simply put, nothing short of FAKES! Although legally in Italy, it seems that if a watch is 66% made of original parts it is considered as authentic, sold by ‘genuine’ people!

I believe there are out there in total approx 25 ‘Pre-Vendome Black Seal’ pieces, may be even more, safe for 5 pieces, most are with no case-back markings, no watch numbers, incomplete or reworked packaging, even wrong cases or finishes etc… I am aware of 6 re-replicas of the 5 genuine pieces, their case-back engraving clearly shows the differences, and many of the others are often with blanked or semi-blanked case back.

Very recently on the web it is said about the 5218-218A something like ‘new researches (what researches QWERTY or AZERTY?) indicate that those watches were assembled by Panerai in Firenze ex-employees’, to me this statement is incomplete and therefore a false declaration.  If it is about the re-replicated 5218-218 then in part it is also a wrong conclusion/deduction.

I never before published those below documents; In the past I shared them with a handful amount of people each time specifically requesting the same I am here asking you.

DO NO DUPLICATE, DO NOT COPY, DO NOT PUBLISH OR RE-PUBLISH,

In those document you will find reference of the Panerai Slytech Black Seal 5218-218A, It is not only referred, it also include its 1997 list price.

GIOIE snc, was the appointed exclusive distributor in Italy of Panerai & Slytech Panerai watches from 1994 to 1997 (till the take over by the Vendome group) 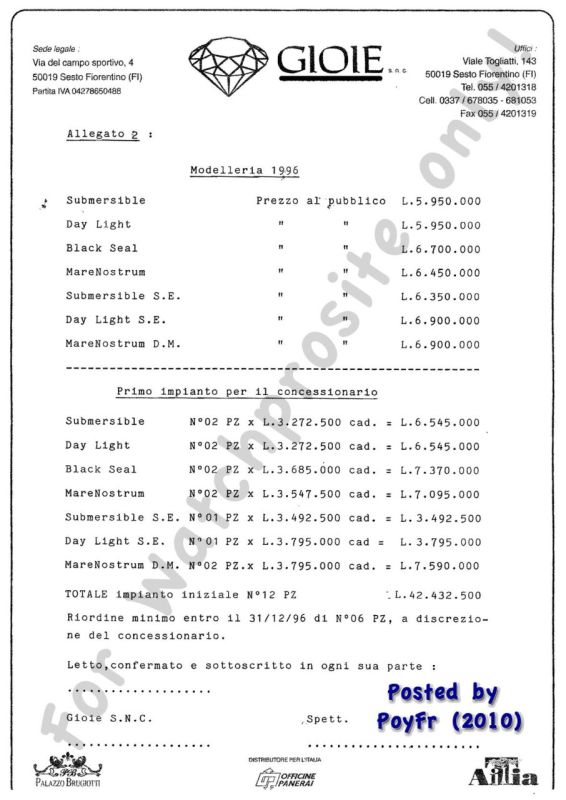 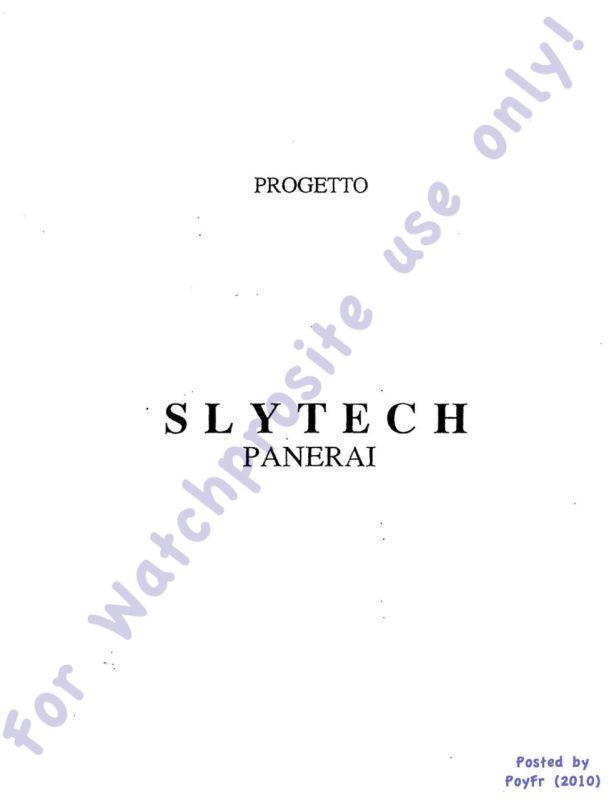 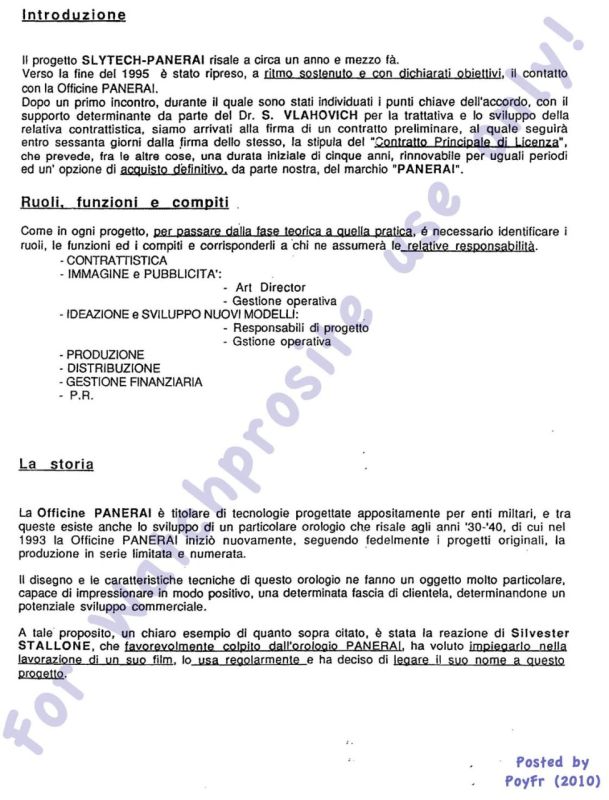 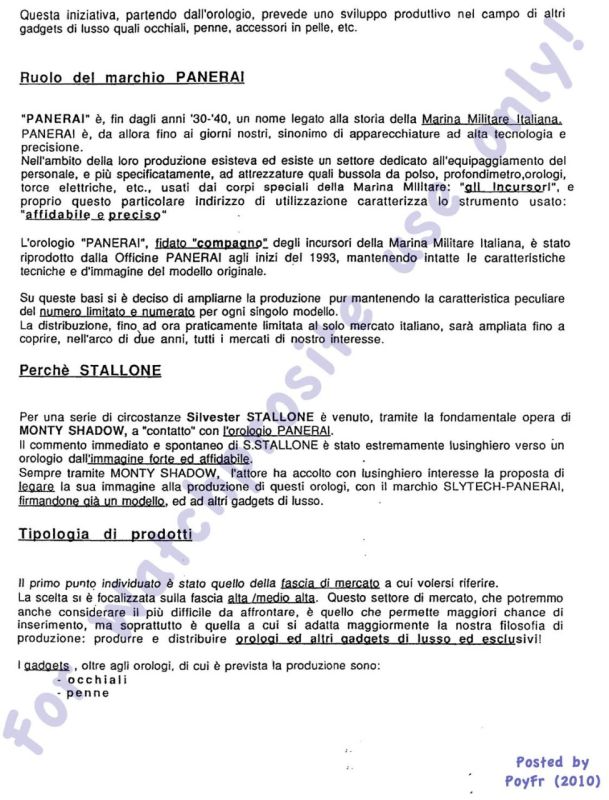 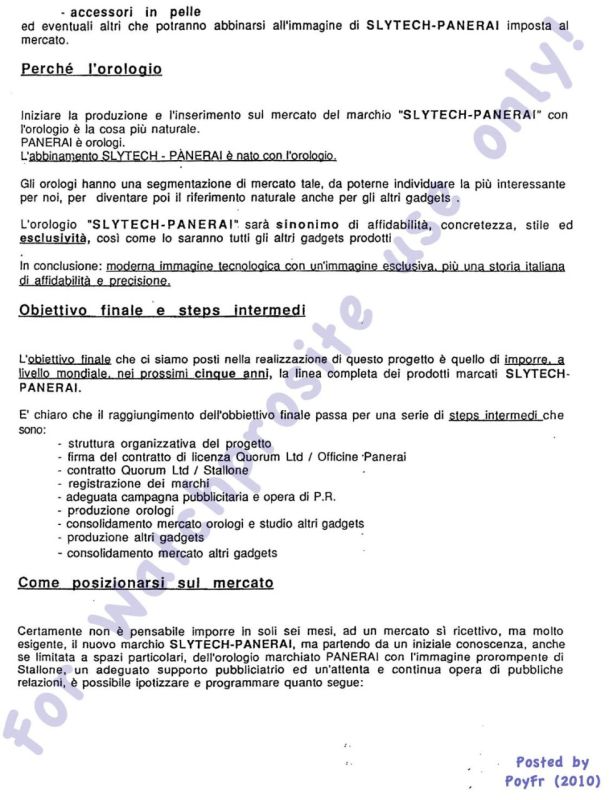 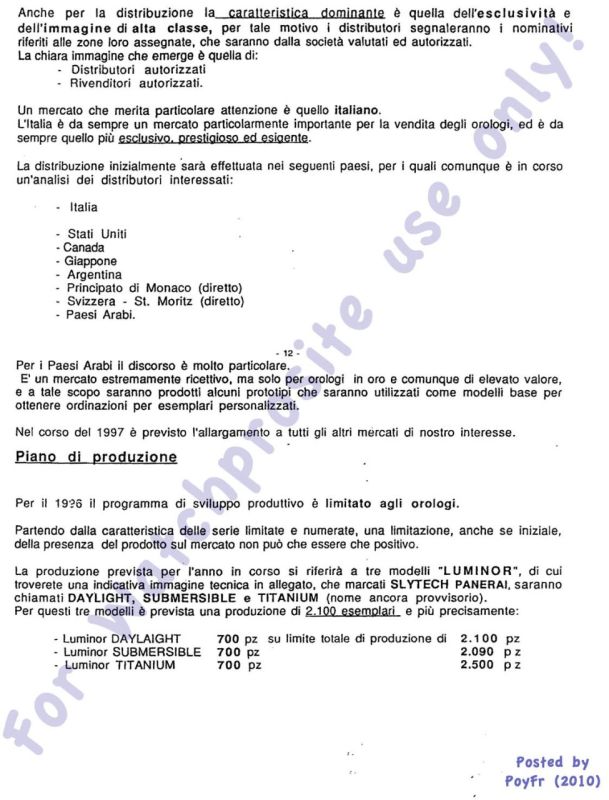 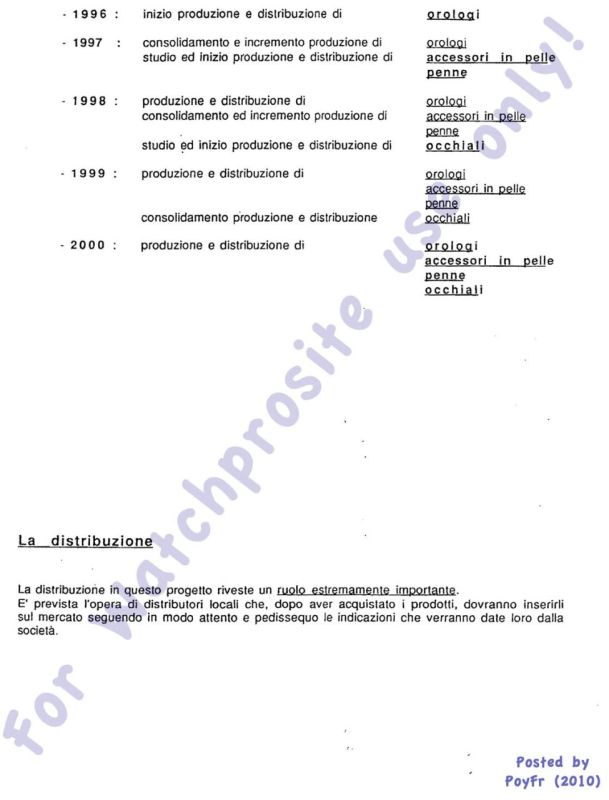 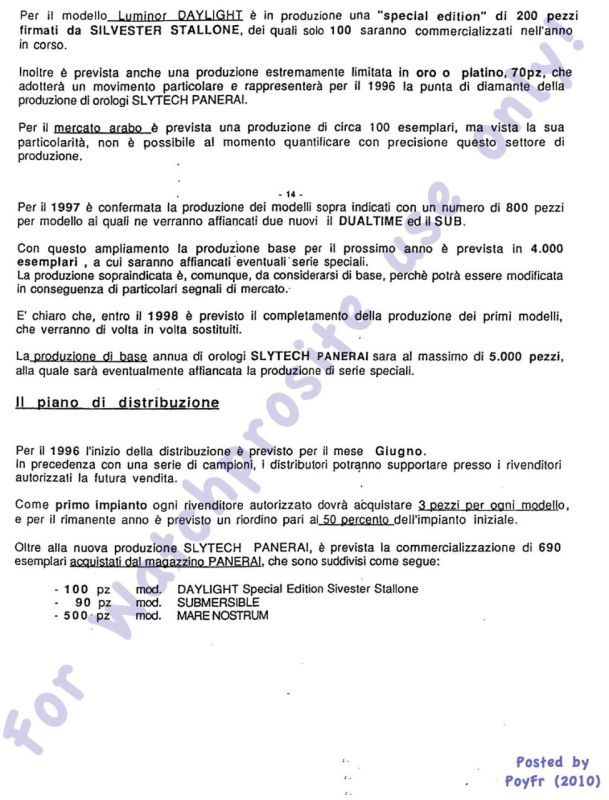 Thank you so much for this intersting and amazing post !!!!

Talk to you soon.

that was great to read PoyFR. Really informative and interesting. Lovely watches Nicholas.
login to reply

You can search everywhere, these documents have never been posted before.

I'm very happy to see that POY accepted to share with us this part of History.

Thanks for your kind words.

It is clearly stated that 70 pieces were to be made in Gold or Platinum...

Then this document clearly speak about the Dual Time ( GMT ) and the Submersible.

We know that these watches were released very early in the Vendome era.

It is also said that some Panerai watches in titanium were on to see the light:

As for the Blackseal Slytech, yes, POY, there are fakes which cost an arm, and original, genuine watches, which cost 2 arms.

Your answer was imaptiently awaited, my friend.

For the first time on the net, here they are, for our greatest pleasure and education.

If you agree with that, I want to save these documents here on our Panerai Forum, and dedicated a special post on this very important historical topic.

We may also, if you agree with that, include some technical draws of the Blackseal Slytech.

Tell me all, my friend.

THANK YOU for the history lesson.  Very comprehensive (despite that I can't read Italian)!

Thank you so much for sharing such valued info on a very rare bird.

the adage "learn something new everyday"