By: MichaelC : February 2nd, 2020-09:22
Got this one last summer, and have been overly content with it.  In 20 years of collecting, I can't think of another watch that offers so much at this pricepoint.  And I find the same high level of enjoyment wearing this as I do an AP or The Freak.
Bravo Omega.  And thank you. 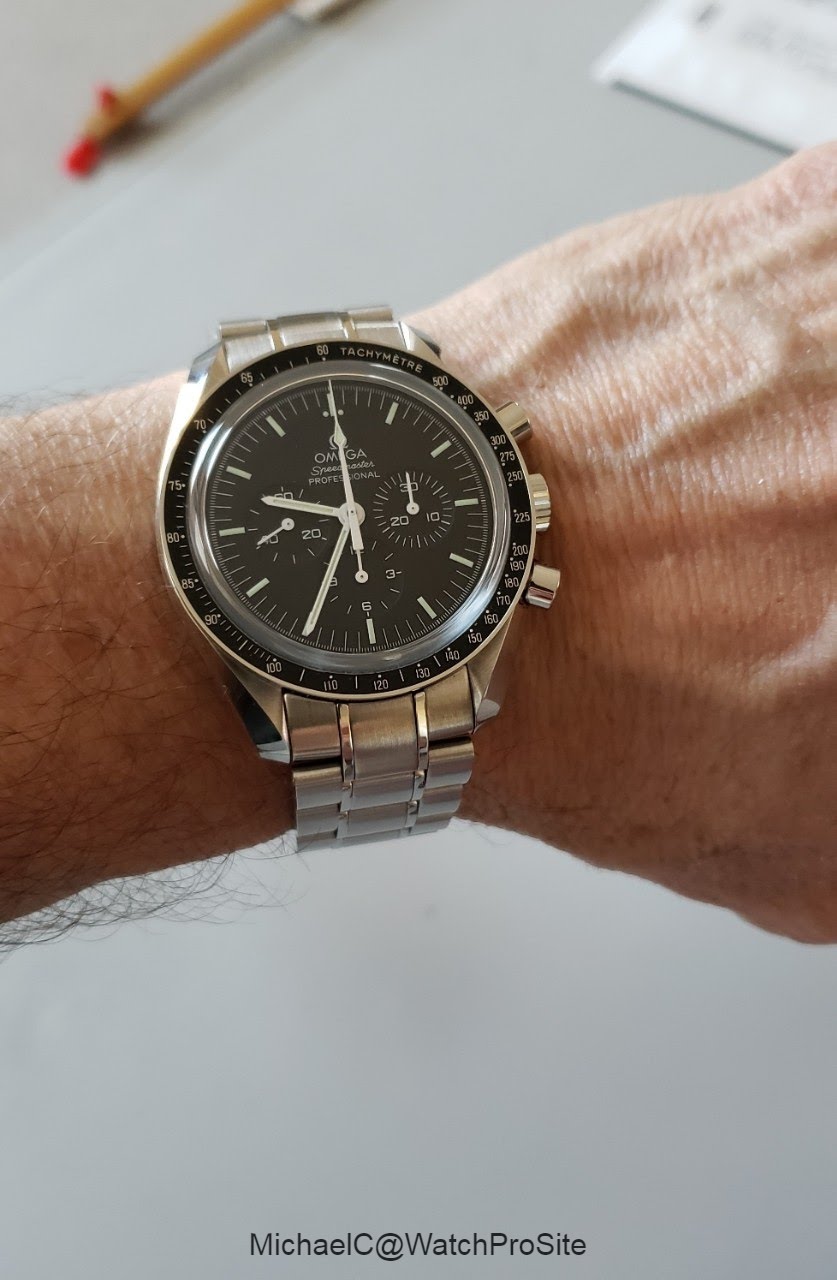 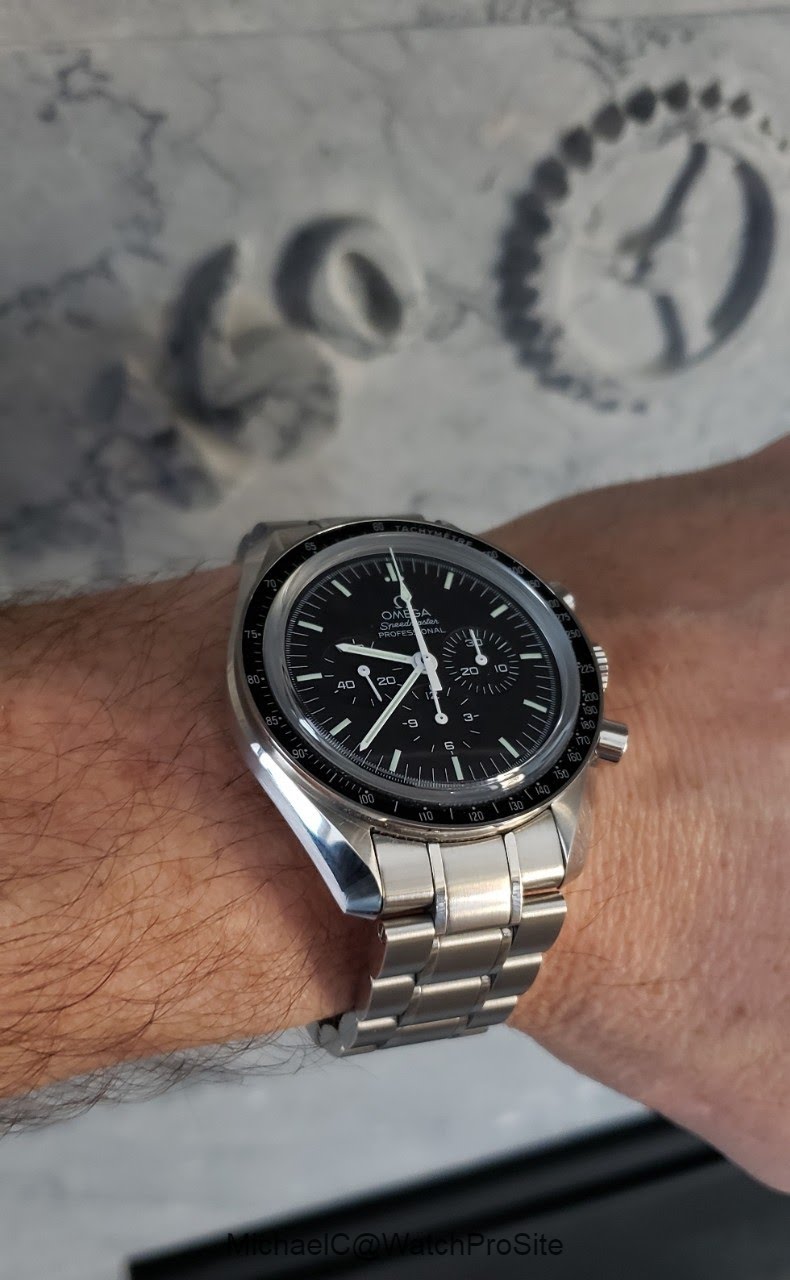 By: Bruno.M1 : February 2nd, 2020-09:52
It was my grail when I was 15-16
And only about 30 years later I bought one
During this 30 years I had several Patek, AP, Lange, zenith, JLC, Rolex, and many others
But it took me long to buy that speedmaster and I don’t know why
Only thing I know is.... should have done it much sooner
And the new steel with 321 movement.... I’ll buy it without even thinking
Should be mine this or next month
login to reply

By: MichaelC : February 2nd, 2020-10:02
20 years of AP, Panerai, Ulysse Nardin and some others for me... and then finally I got this Omega. We all experience types of evolution as a collector / enthusiast. My current phase, which started to take shape these past 5 years, is only buying watches I completely believe will remain in my collection. I used to try and sell one as I added one, and never wanted more than 4 or 5 nice pieces. But now I am OK to slowly add real "keepers".
A resulting condition is loving them all about the same, but not having time to indulge them all enough. A good issue to deal with

What I love about it is that it’s inconspicuous, sporty yet strangely also a touch of elegance.

One of those watches you can wear every time everywhere and at any occasion. Add to it that it will never breakdown and a very accessible price level and you’re home free

Add the (by now slightly exaggerated) NASA moon landing saga to it and you’ve got a watch that’s just 100% right.

Wondering why I don’t have one then?

Simple answer, my son has one and I borrow it quit often from him
login to reply

By: Jurry : February 5th, 2020-05:09
Because my son subsequently declared my entire collection “family property” as well and took off with my Overseas Chrono haha.

Which is great after all nothing as gratifying as watching your kids have become watch addicts as well and both now have a nice basic collection with proper good watches.

By: Lankysudanese : February 2nd, 2020-11:26
I have only been watch-collecting for 13 years, and only recently did I "see the light"
Every watch collector, truly, does need to own a speedmaster at some point in their collecting career.
Thoroughly-enjoying my ashamedly-non-moon-related Speedie 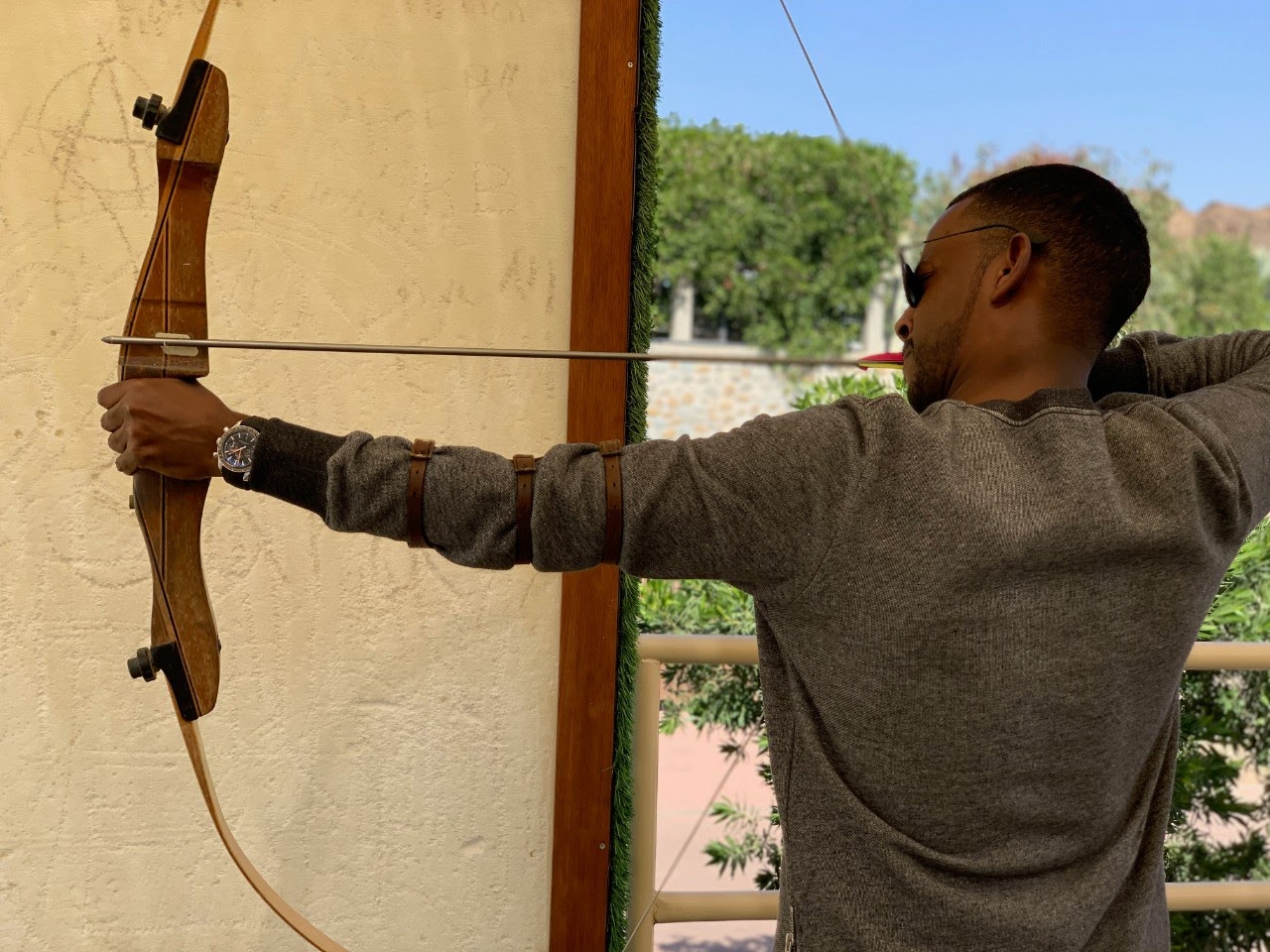 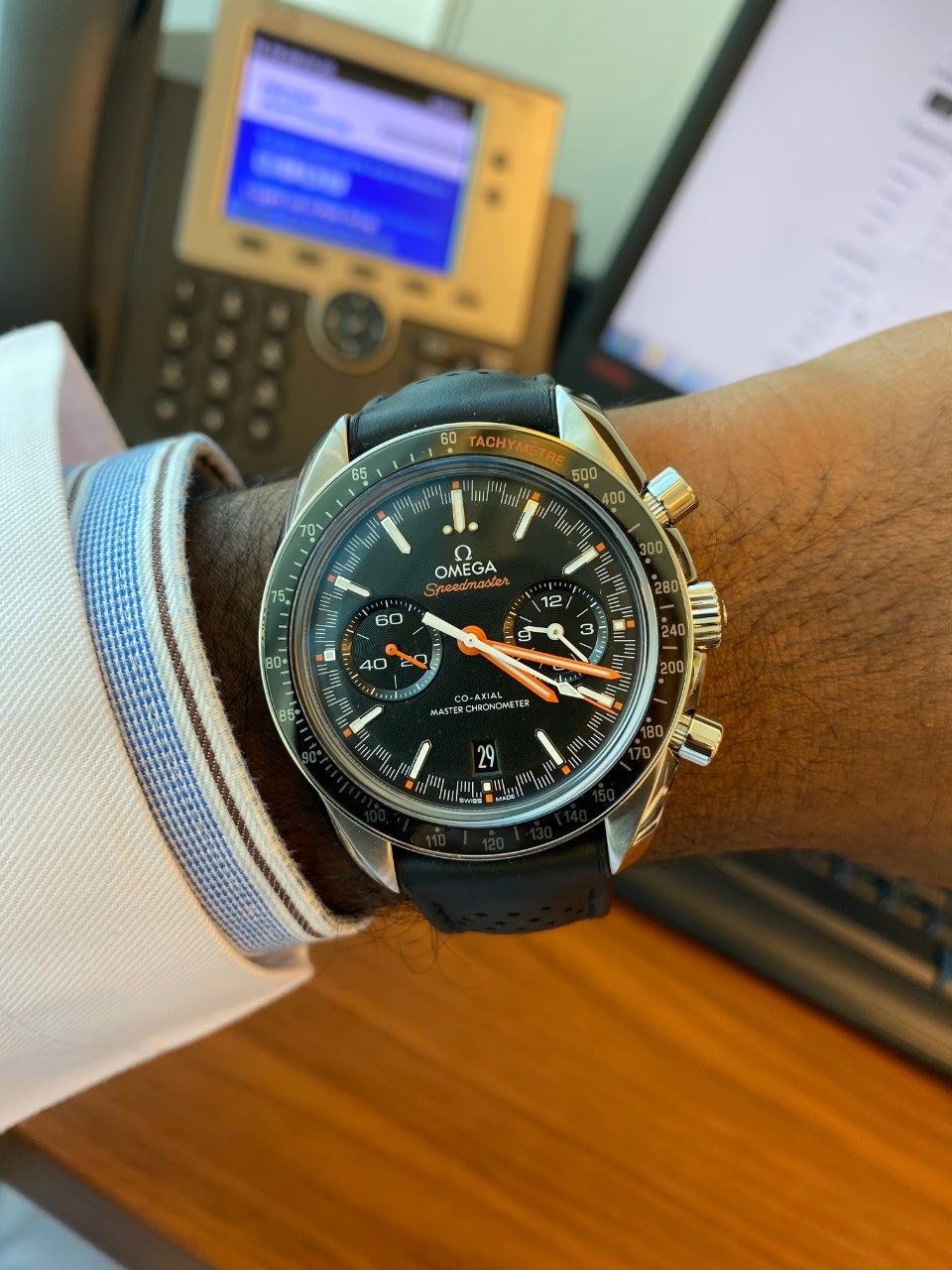 By: Subexplorer : February 3rd, 2020-05:36
... both in its black dial or silver dial. The orange/red accents on indexes and handset and on the bezel "Tachymetre" word add a very special sporty touch to the watch and look awesome on the wrist.
Though I personaly prefer the more traditional manual movement and three registers versions of Speedmaster I like these modern renditions so much and as a matter of fact I own two Racings in both dial colors as well: silver and black, as well as other watches with two sub dials, including the Moon Phase model. These are superb modern timepieces inspired in the original Speedmaster and equipped with the beautifully decorated and precise Co Axial automatic movement.
Thank you for sharing yours and keep enjoying so much.
Very cordially, Abel.
login to reply

By: Lankysudanese : February 3rd, 2020-08:34
Thank you, Abel, Truly, thank you.
I am more than enamored by this watch. The amalgamation of modern technology and classical looks leads to a superb final product.
login to reply

By: MichaelC : February 5th, 2020-05:04
It has been years, unfortunately, since I "pulled one back". I am known as a gun enthusiast, and I am, but I prefer shooting a bow. So peaceful and relaxing.
login to reply

Thanks for the compliments on the photo
login to reply

By: MichaelC : February 5th, 2020-05:05
I love the dials and details, but they are too thick and look funny on my wrist. But maybe not a bad thing, I could not afford as many as I would like to try!
login to reply

By: Cpt Scarlet : February 2nd, 2020-13:54
Worn by heroes of the race to conquer space and available for us to own. Keep enjoying it Michael ! 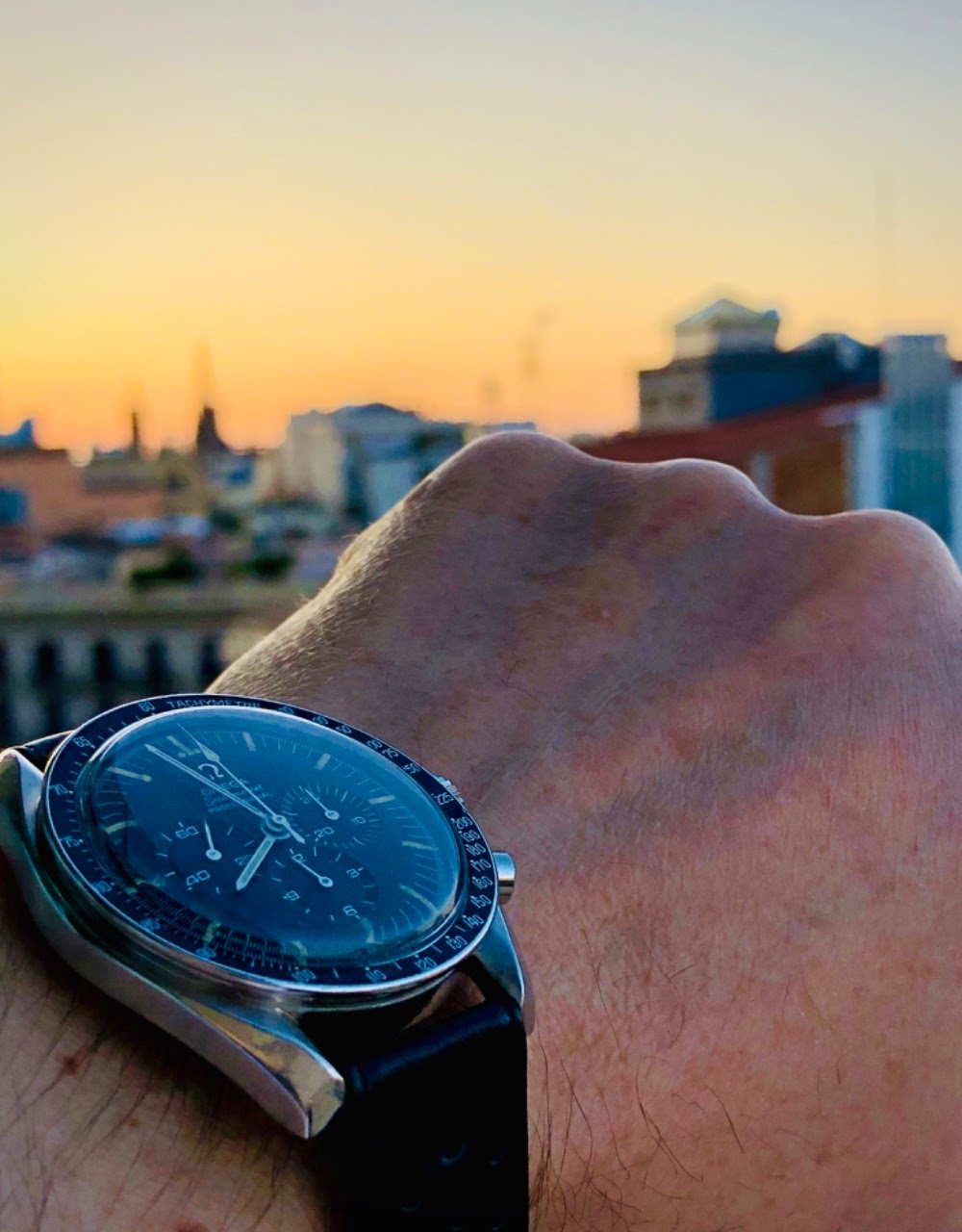 By: christianch : February 2nd, 2020-15:00
many watches in my collection but the moonwatch has an amazing value...may be the best value.
Also it is generally available so Omega (at least for now) doesn't play the game of others..I love that.
And of course is the brand of 007

By: MichaelC : February 5th, 2020-05:08
I consider myself somewhat seasoned as a collector, but it took many years to open my eyes towards this light. Better late than never!
login to reply