By: amanico : July 11th, 2019-03:35
When the Master Géographique was unveiled in 1989, it was an original, friendly, sophisticated and beautiful watch, displaying a complication which is somewhere between the GMT and the World Time. Indeed, when you select the city you are traveling, the time zone of this city is displayed in the dedicated sub dial. Easy to use, complex to achieve.
Here is the " Ketchum " Edition, in platinum, belonging to our dear friend Sandgroper. 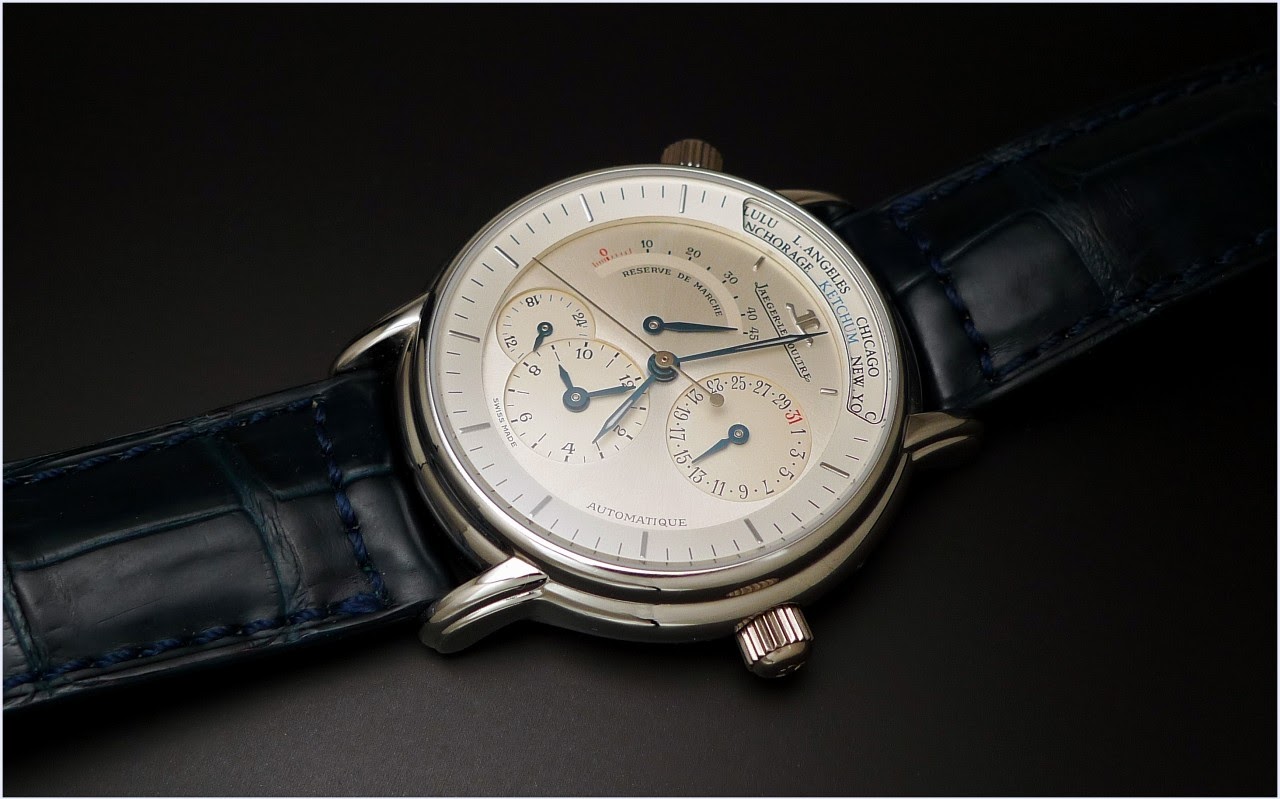 In 1996, the Manufacture revisited the Master Géographique, with a more modern dial. Here, in platinum, 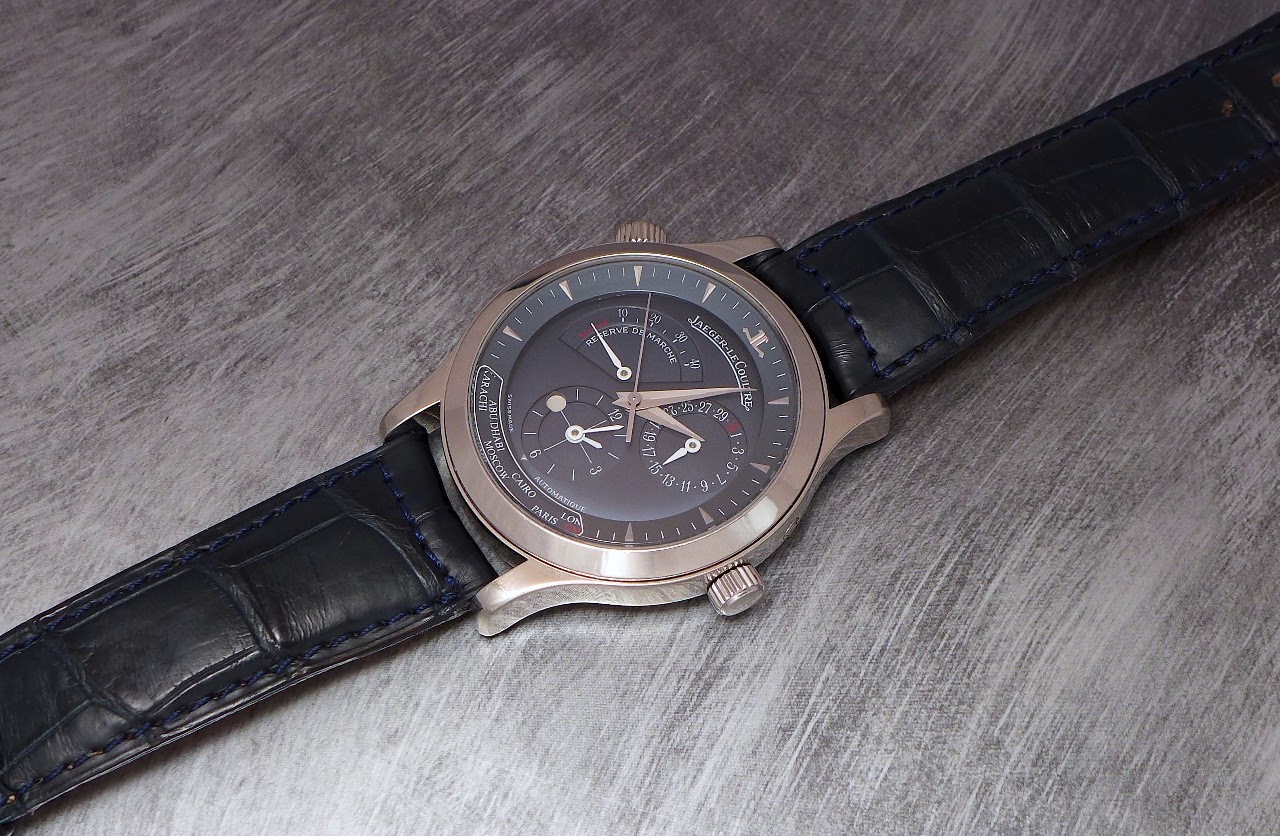 With a splendid hinged case back: 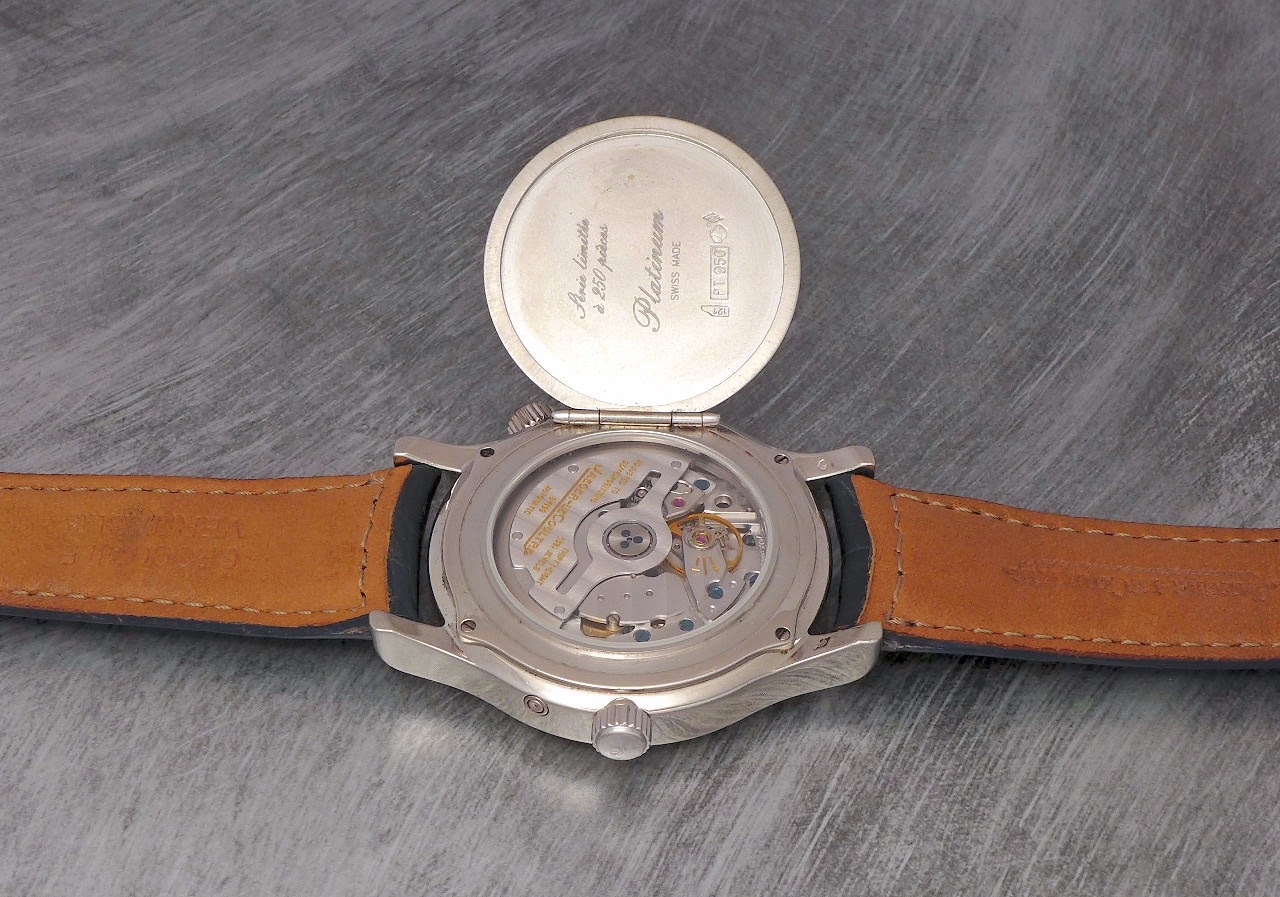 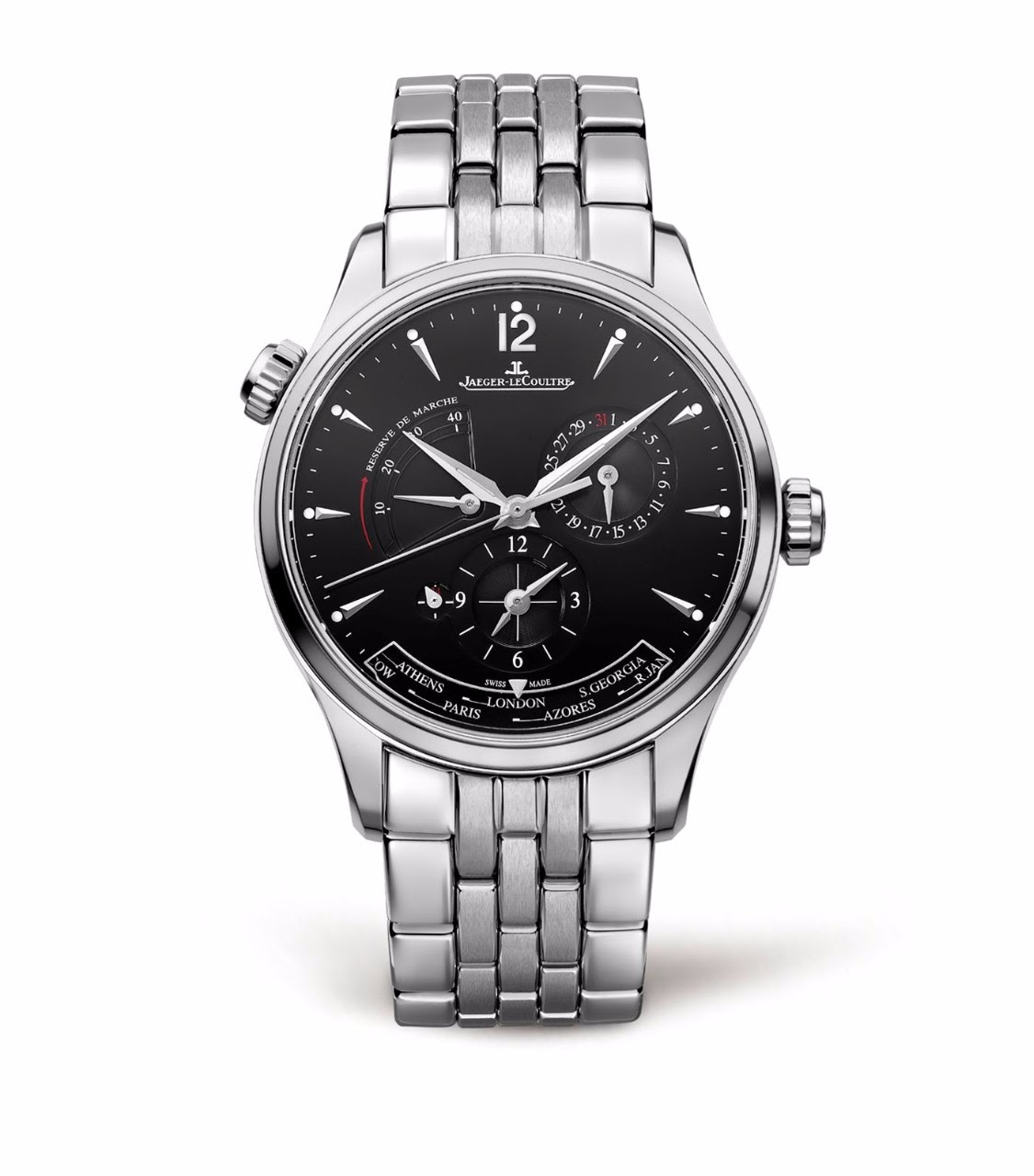 And, in 2017, the Sector dial, simplified, without date nor power reserve: 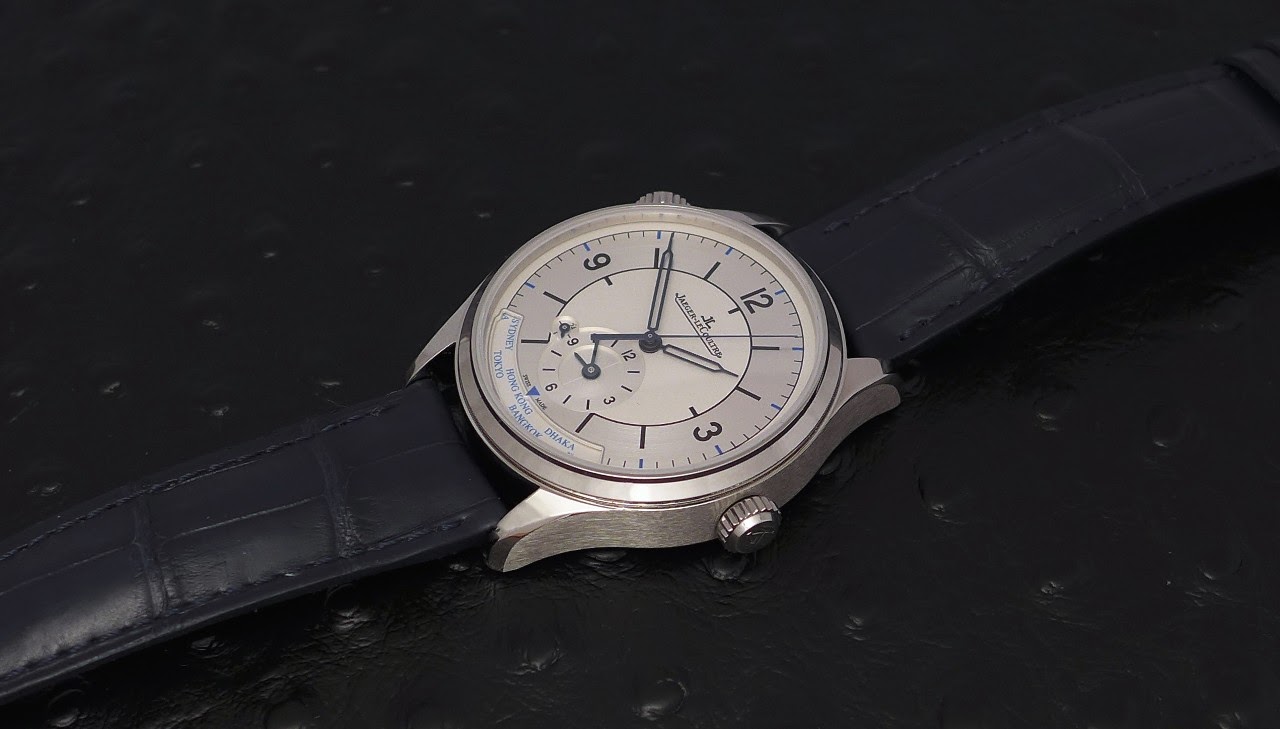 We could think that having 3 evolutions in different metals ( colored gold, white gold, platinum and steel ) with different dials ( grey, black, silver, blue, sector ) would have already be enough.
But with Jaeger Lecoultre, it is never enough.
The Geographique complication has been used with different cases, such as the Reverso, in 1998: 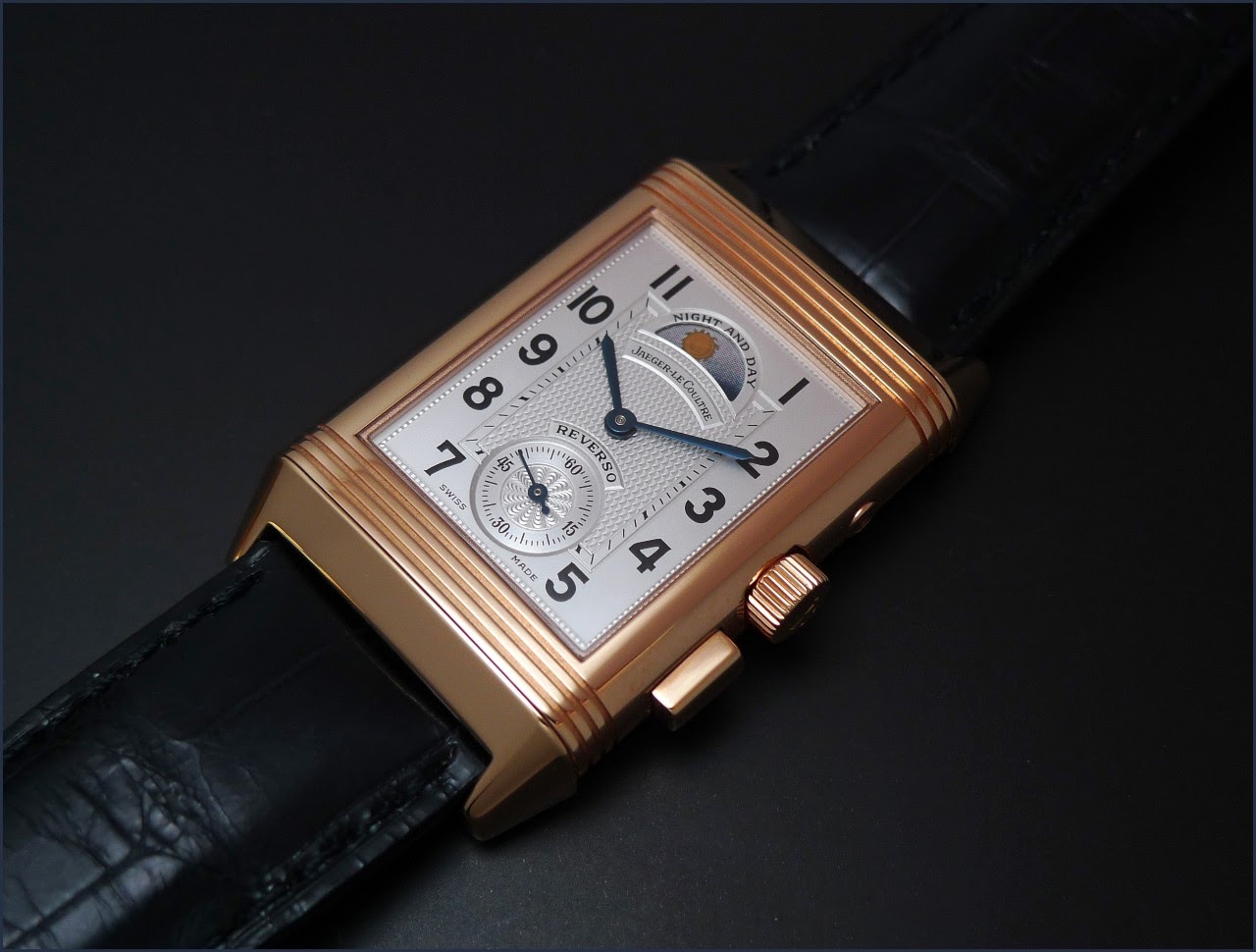 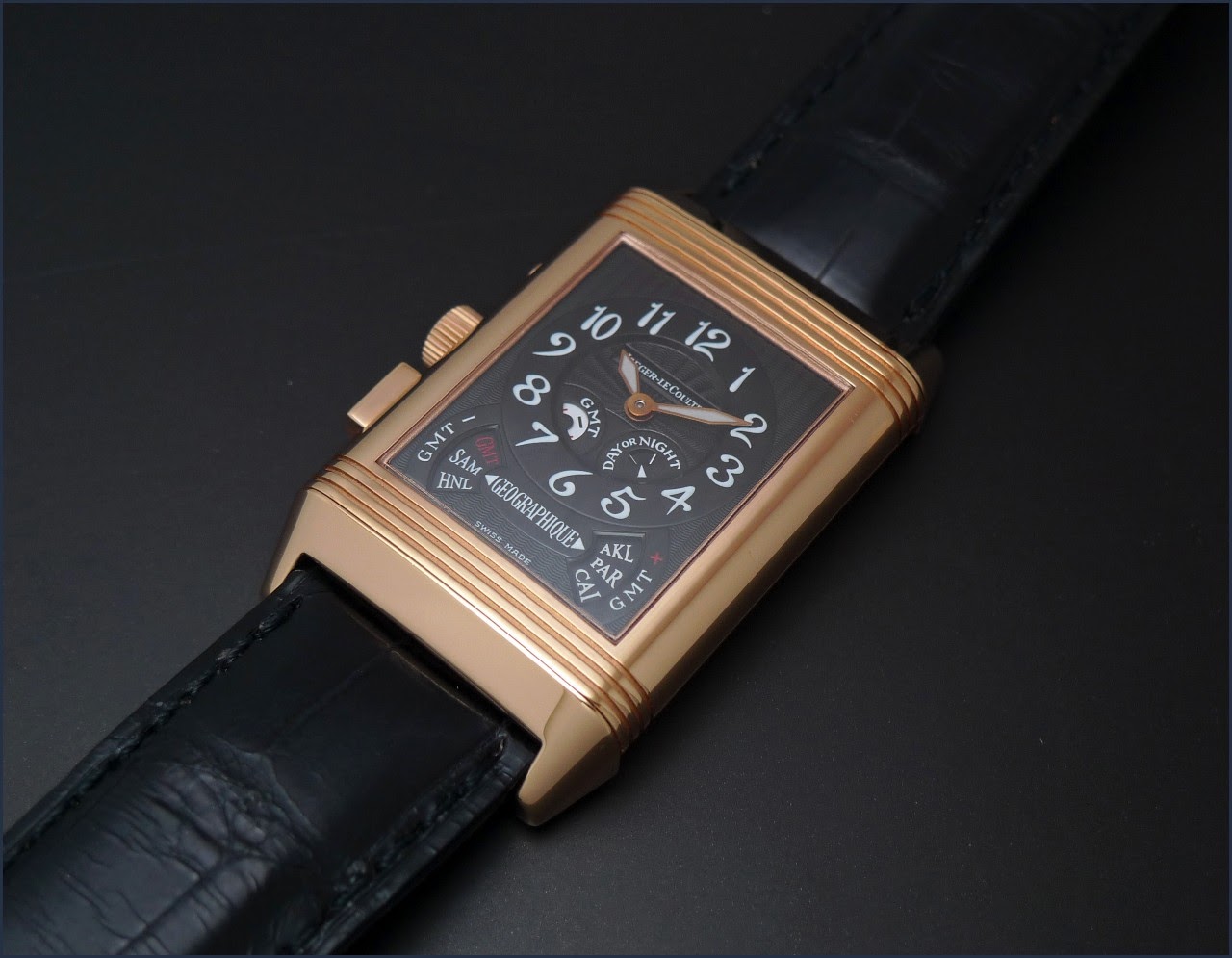 The Master Compressor Géographique, in 2002: 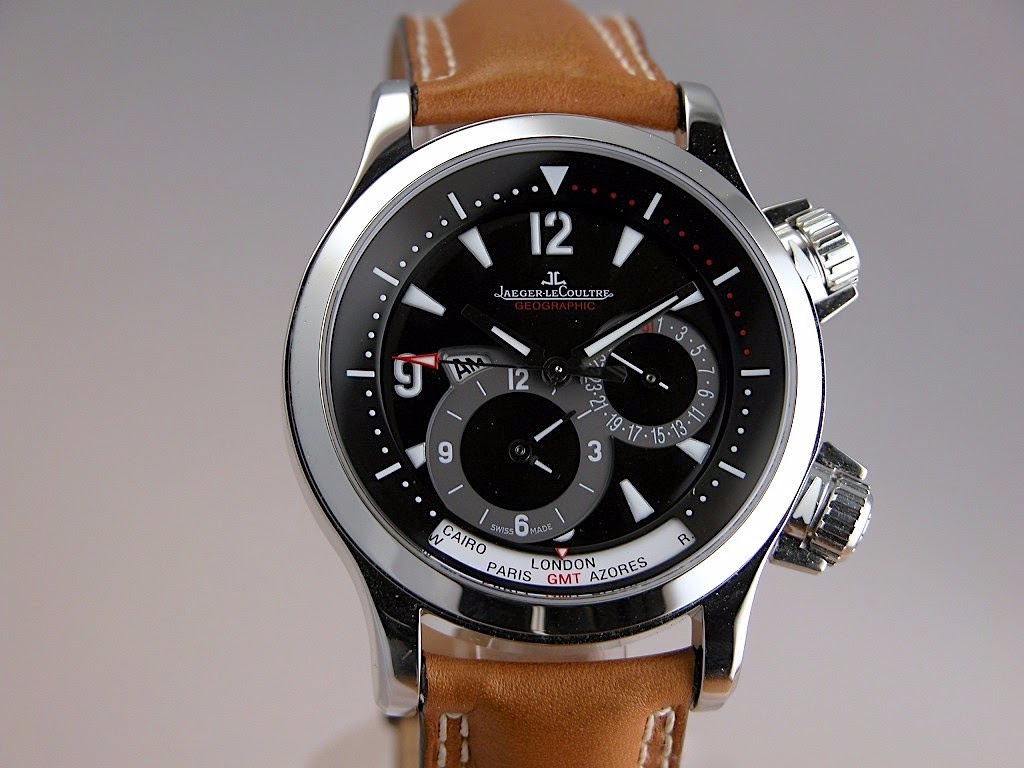 The Master Compressor Diving Géographique, adding a mechanical depth gauge to the Géographique complication in titanium, in 2006 / 2007, then in 2009, in rose gold ( Navy SEALs Alarm edition ) : 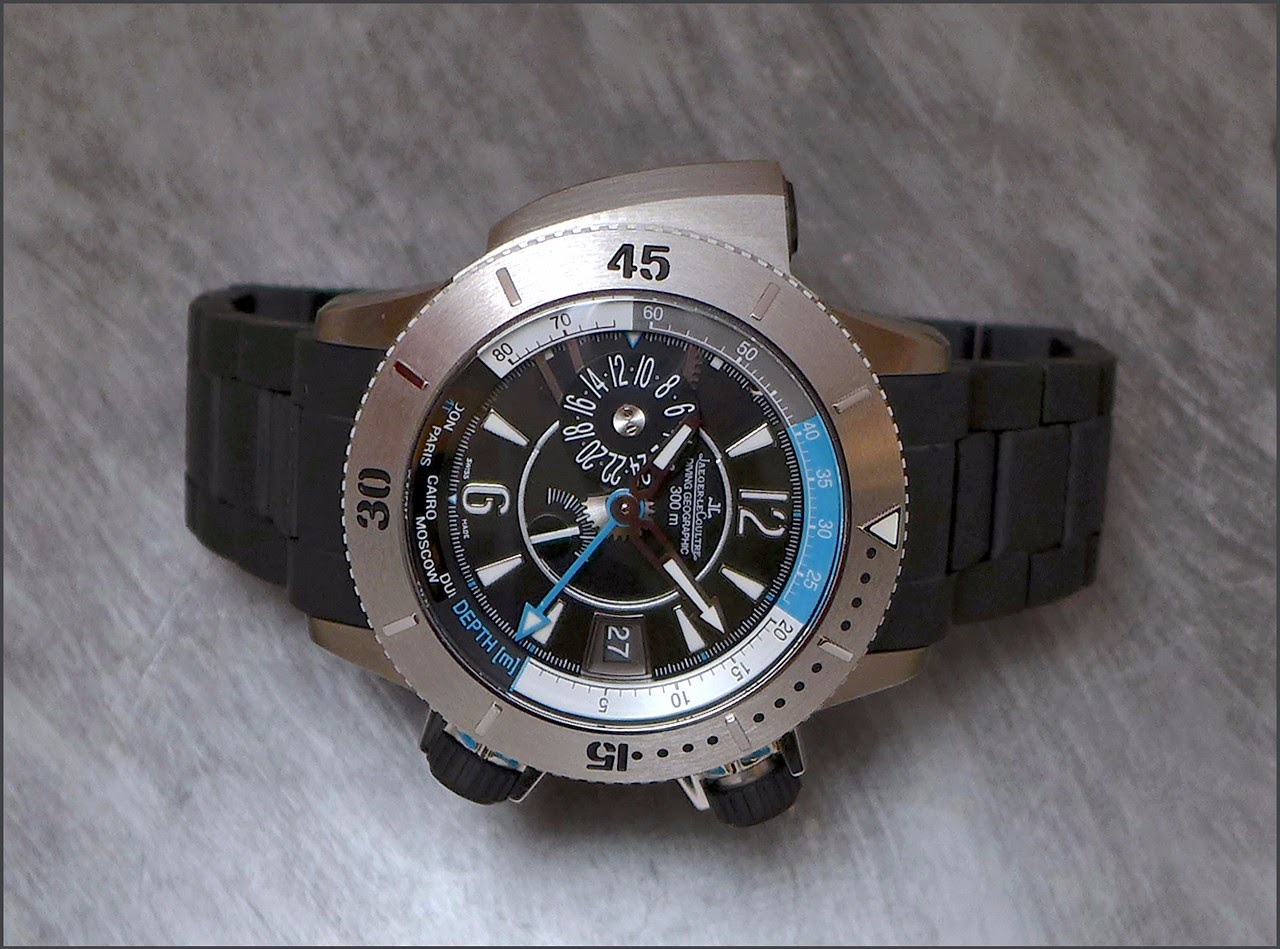 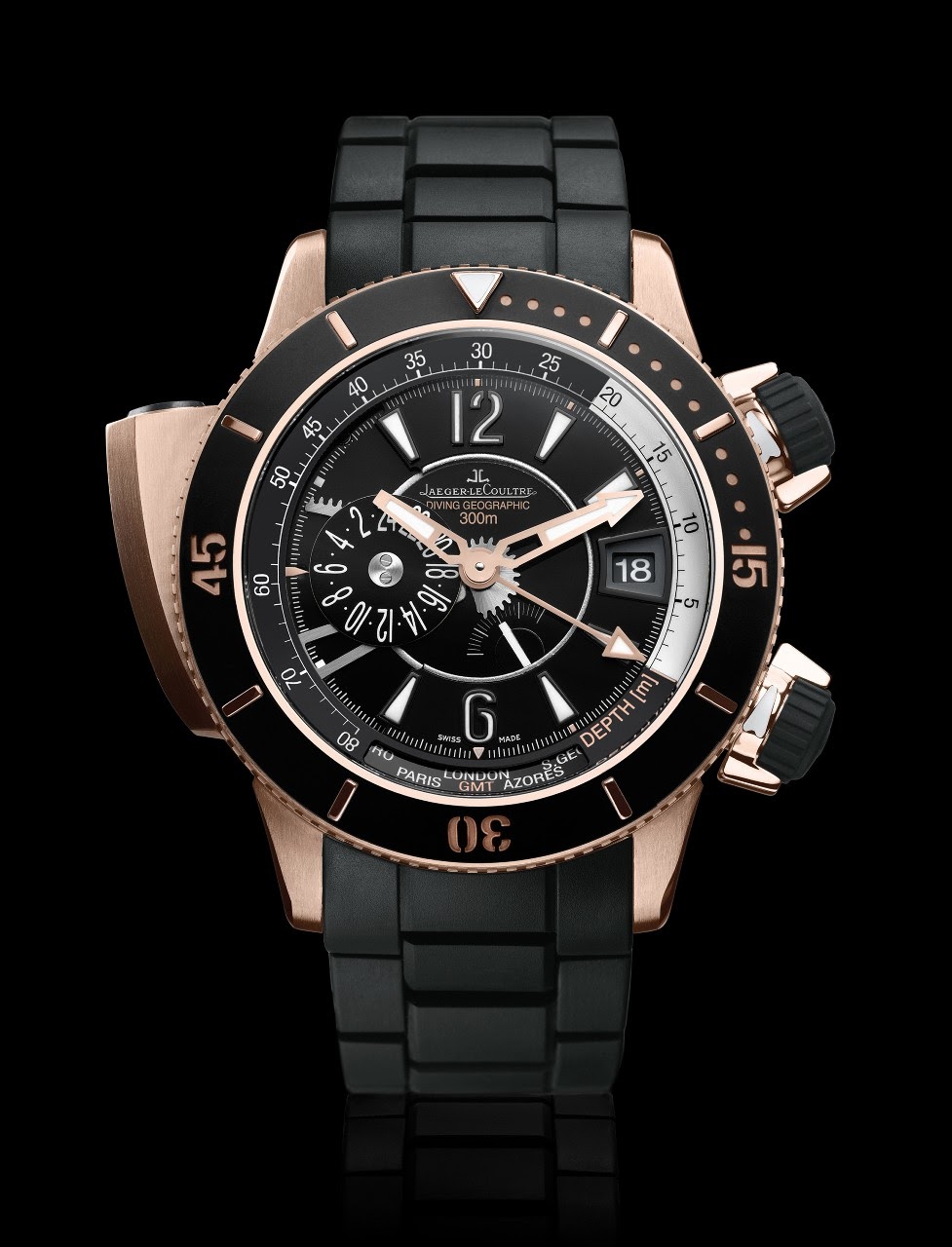 And last, but maybe not least, the Polaris Geographique World Time, issued in 2018, in steel, in a limited edition of 250 pieces. 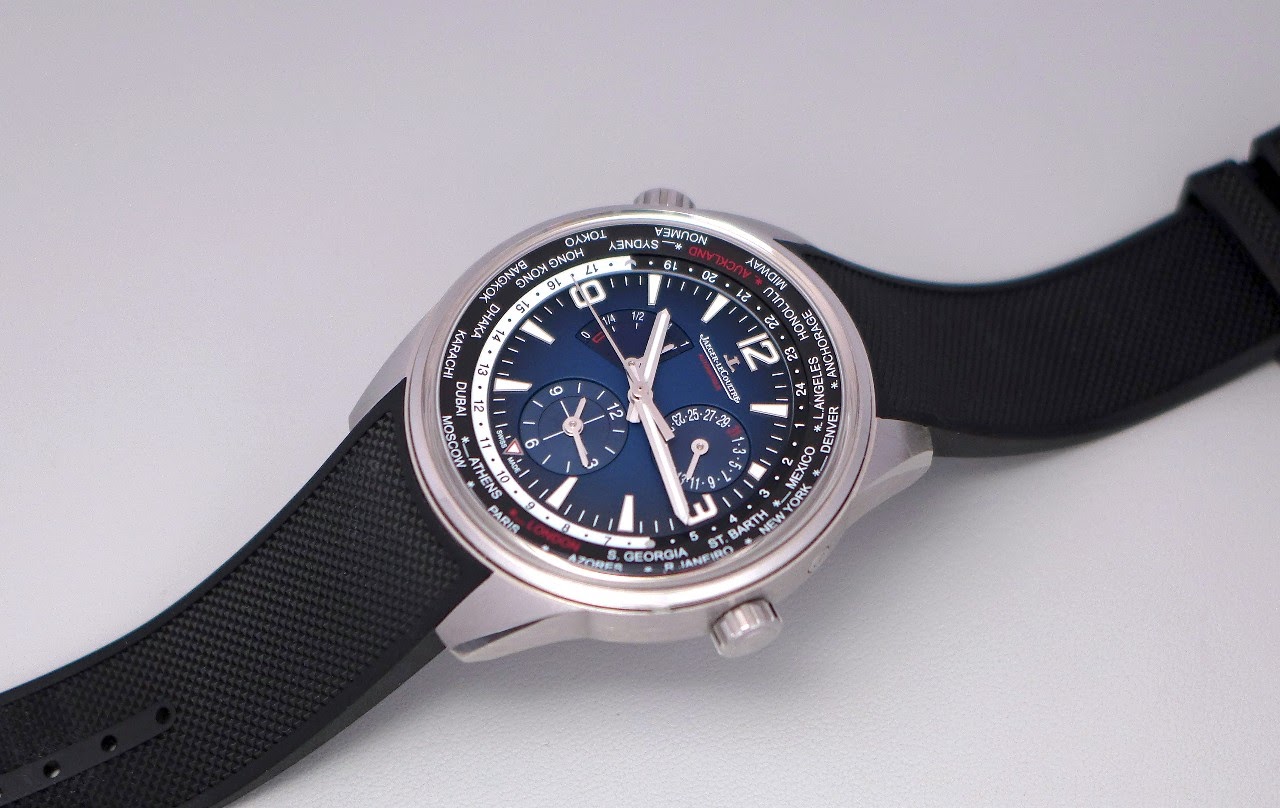 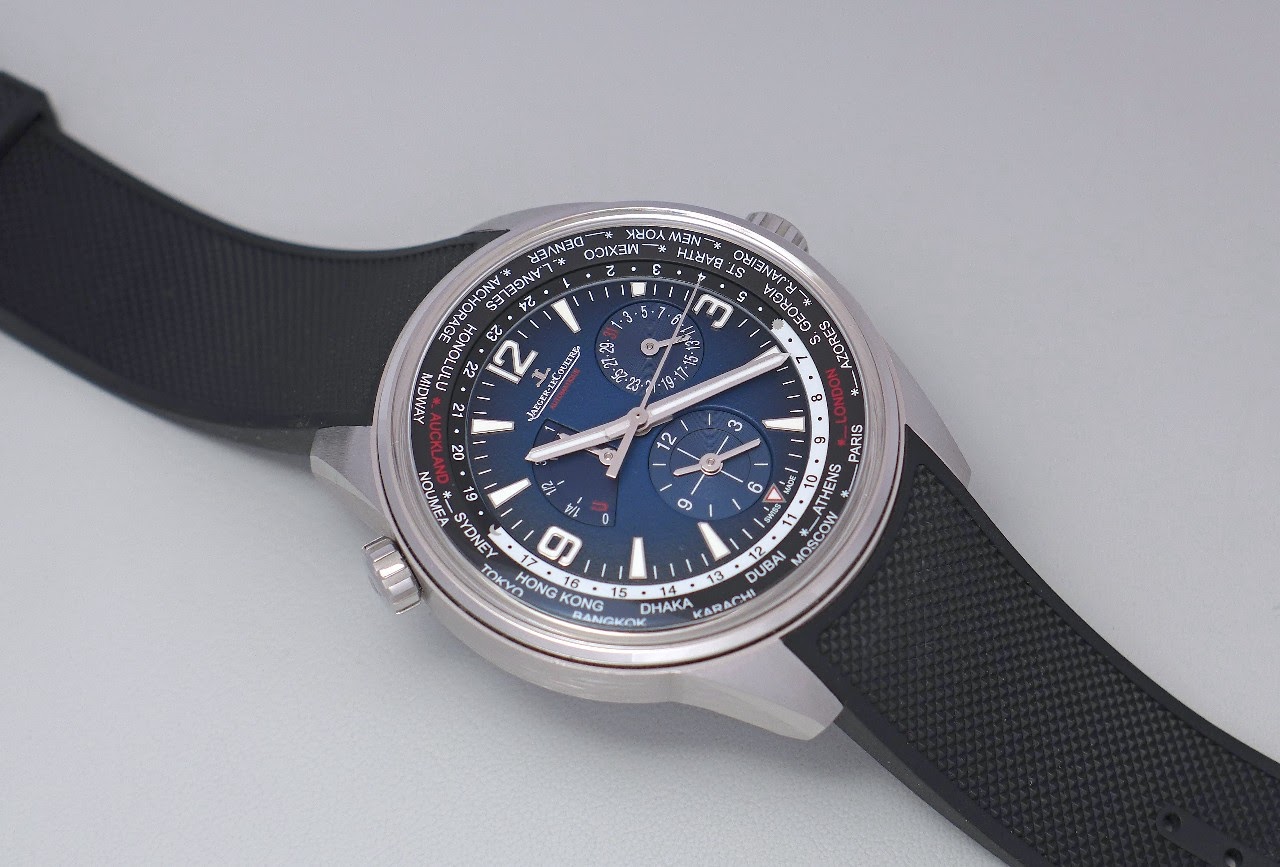 Who else can achieve that?
Who will complain, too?
As I said, this is one of the many example showing that Diversity is in Jaeger Lecoultre DNA.
We'll see that we can say the same with other complications, such as Minute Repeaters, Perpetual Calendars, Tourbillons and so on...
That's why I have a lot of admiration for this brand.
Best,
Nicolas
login to reply
By: xxn : July 11th, 2019-05:00
they sure don't make them like they used to. Everything from the lugs, bezel, dial indexes
login to reply

I love the Géographique - thank you for reminding me! 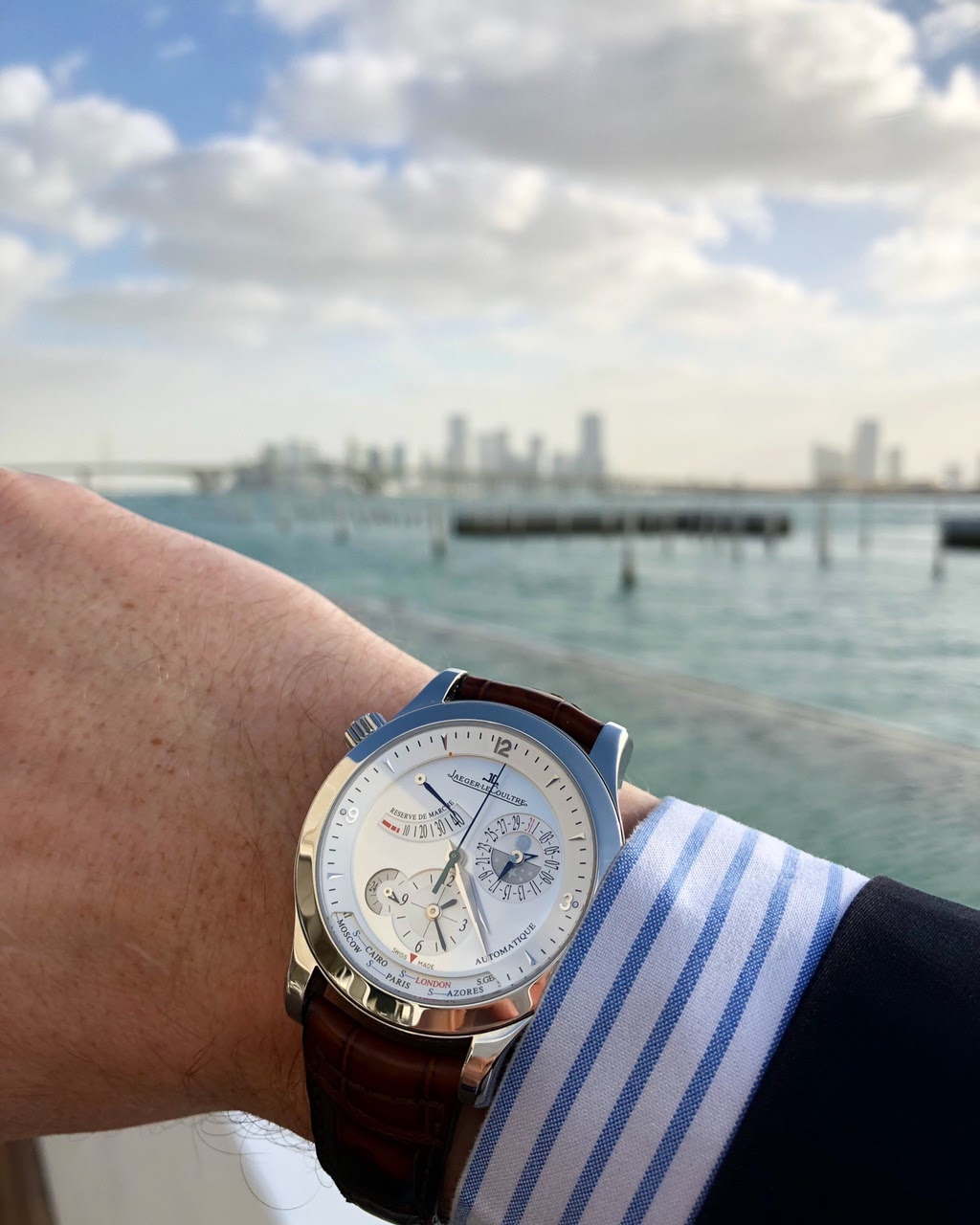 I have also realized by looking at my Instagram-feed that it has been much too long since I wore it last. I will rectify that next week when I am back from my summer holidays.

In the mean time I’ll share a picture of the Géographic doing its thing during a trip to Abu Dhabi.

It is incredible to see how many different iterations has taken this movement.

This combination of a world time indication with an additional (to the main display) zone time indication I can select makes this model the perfect travel watch for me. The 'Polaris' model you show has the same functions, but I prefer the 'Master' design.

to insert a picture of the 2007 Geographic World right before the Polaris edition. It was 41.5mm and the Polaris is 42, and was clearly the inspiration.

When the '96 edition came out, is was voted "Watch of the Year" in Chronos' annual readers' survey.

My personal favorite is the Compressor Geographic in steel on the bracelet. I love how JLC dispensed with the reserve de marche and instead made an instantaneous AM/PM indicator. Also, the white pointer hand on the date, like the one on the 5712/1A, is supremely legible. I'd like to source one, one day.

My secret wish is still that JLC will acknowledge the work-place move towards more casual wear and the public's love of steel sport watches and re-launch the Compressor line with each watch featuring the strap change mechanism and coming with bracelet and rubber or alligator. (Are you listening, Ms Renier?)