Comments:
By: chintu : April 13th, 2021-04:04
With all the hype about space-age materials and the uber lightness of the Richard Mille, I wanted to take a closer look at some of the much acclaimed pieces and chose RM11 as a study. This is an annual calendar + chrono combination with some extra zing added.
The watch boasts of variable geometry and several firsts including some titanium base plate etc; but rather than going starry eyed about those esoteric tech and materials, I just wanted to see how a wearer will tell time or use some of those chrono functions ( which incidentally has a 60 min countdown timer function as well - find out where it is!).
Not being able to see it in the metal, I took the easier route of downloading the images from the web & this forum.
What greeted my eye is a riot of colours; odd sets of hands that merge into the dial face; and a jumble of indicators and sub-dials. A tiny window between 4 and 5 shows a microscopic number ( guess what it is!!)
The fat hour and minute hands with the cut-away parts to help get a glimpse of the sub-dial when they are crossing those can at best be described as an attempt to solve a problem and nothing to do with design coherence..
The minute hand is quite short of the indicators owing to that shape of the case.  And the chrono seconds-hand stays so far away from the markers due to the tonneau case, that it would be a miracle to read the exact second when the hand is stopped.
Is the "day-of-the-week" important in an annual calendar? Oops... RM thinks it is not. ( of course several other brands have dispensed with this important indicator in their annual / perpetual calendars as well)
Can anyone use the chrono and get the readings off these sub-dials at a glance? Most likely one may squint into the dial gamely and make an educated guess and least of all if I imagine the Formula 1 driver trying to read the chrono  or even try to read the time, with his hands on the wheel!!!
I am left wondering if in pursuit of esoteric materials and lightness, the core principles of watchmaking have been consigned to the side?
While the rose gold version seems slightly better, the rest of the offerings ( TPTcase) go more south in terms of the legibility factor!
For a minute forget that this is a RM and then look at the watch so that there is no bias. The one that can readily decipher the functions and display without any discomfort is a winner for sure. The pics below are rather large and imagine the actual watch size... 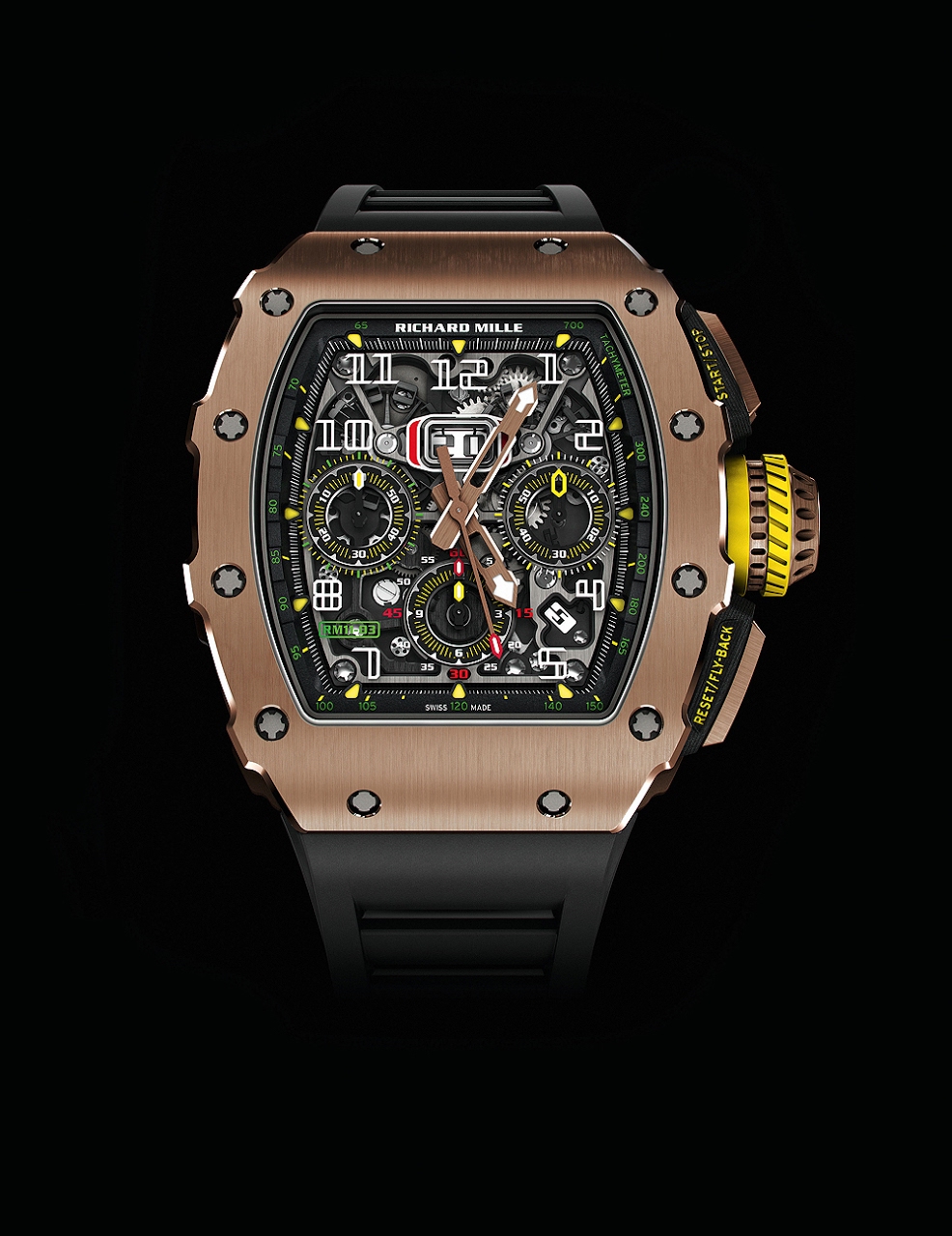 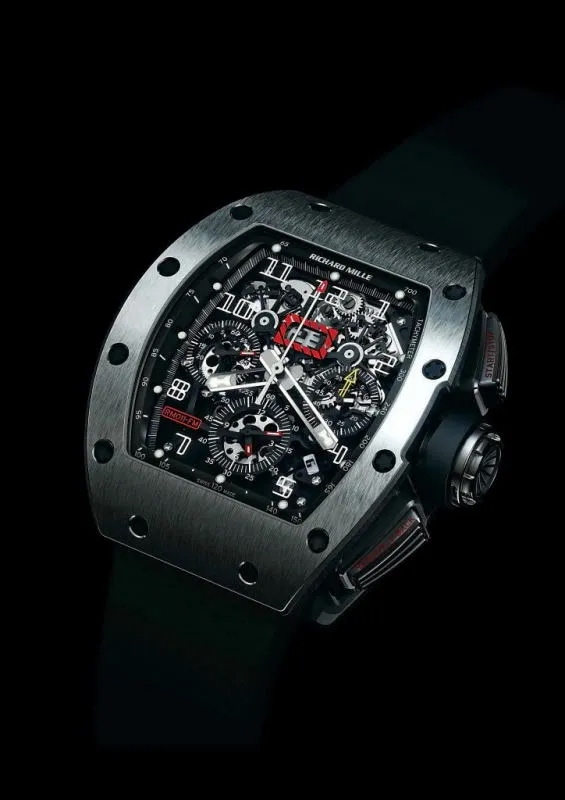 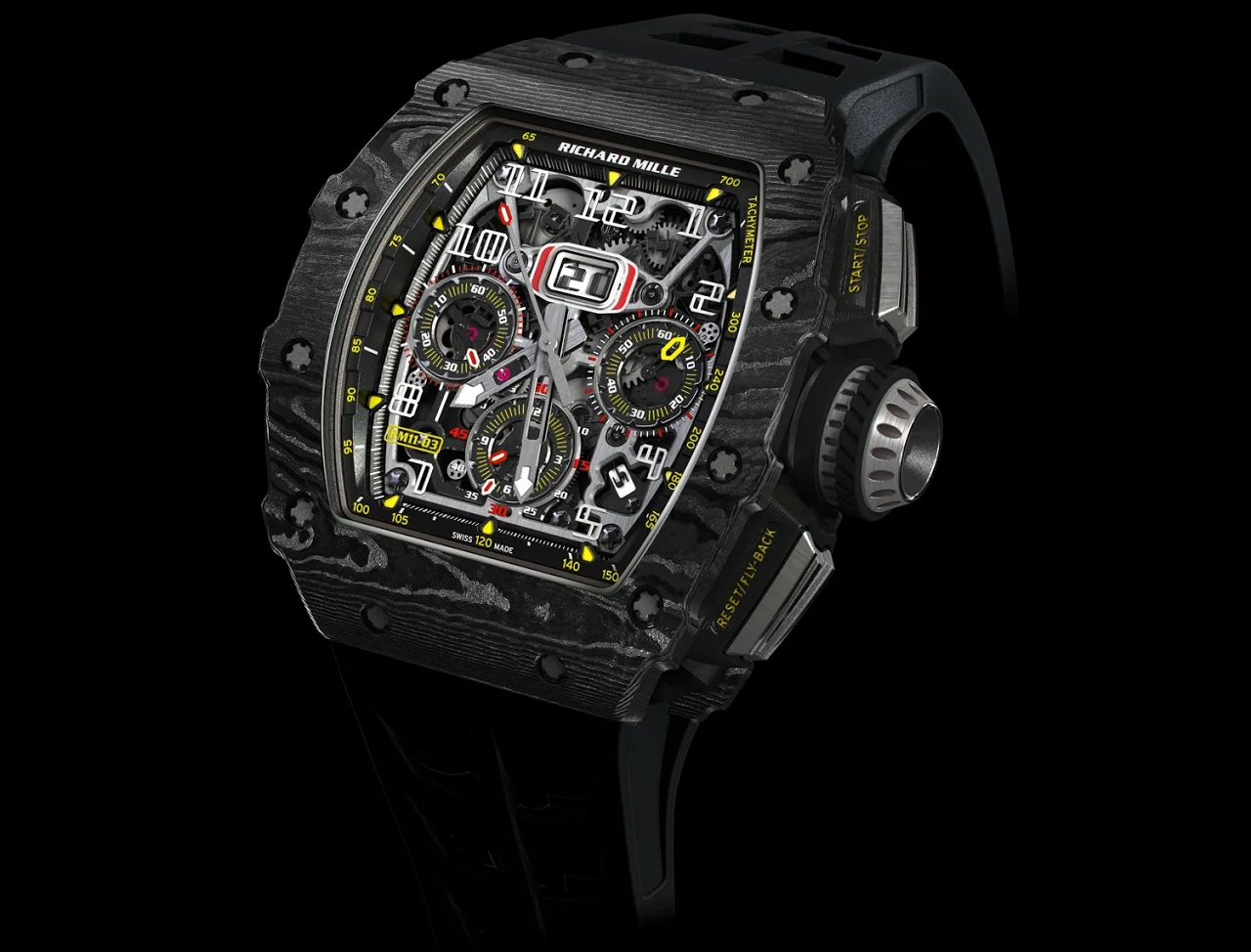 By: MiguelFlash : April 13th, 2021-07:11
and there is nothing wrong with that for this market.  You are obviously correct that function wise the dial is a complete failure.  However, jewelry and fashion wise the watch is obviously a complete success. I personally never liked RM.  Tried a couple on a few years ago at Manfredi in Greenwich when they were an authorized dealer and they felt like plastic watches. So I am not a fan but I can understand why they have such a loyal following.
login to reply
By: chintu : April 13th, 2021-07:14
..each Brand has its share of loyal fans and that it what makes watch collecting unique and exciting and evokes strong passions.
login to reply
By: mdg : April 13th, 2021-07:21
...any actual time-keeping functions are incidental.
login to reply

By: brauner : April 13th, 2021-08:27
If you would wear the watch you will learn to use it. If not go for another brand. There are many. Talking negatively is not necessary. Where is the lesson? Just talking badly.
login to reply

By: brauner : April 13th, 2021-08:47
😉
login to reply
By: chintu : April 13th, 2021-08:50
And so do I have mine.
Just that our views are different. This forum is about independent views. I have not been arbitrary or trolling , but highlighted whatever I felt to be the inadequacies of the RM with the relevant images.
Watch review is not about merely praising a watch and ignoring its flaws; but being equally candid about what is visible as a short coming. In the RM11 I did not find anything praise worthy though.
Diversity of opinion is a good thing.
Cheers

By: brauner : April 13th, 2021-08:59
Thats what I do as well. But I would never talk or write about a lesson or a study. That sounds objective. But you gave us your opinion only.
login to reply

By: myles721 : April 13th, 2021-09:54
about JLC Duoface because much to my regret I owned one that was a fail (others on this blog have said the same) in just about every category. I think if you have personal experience you have every right to post it as it is a service to other purists. I think aesthetics speak for themselves and should be discussed as such ie..not my taste or I prefer this one because etc.
login to reply

By: oyster case : April 13th, 2021-09:27
Annual Calendar pieces are often busy and struggle with legibility. I think you make some good observations about this one and have presented your points well. Ideally a watch should be functional but to what degree is perhaps a subjective judgement. There are many factors people consider to choose a piece and those who have chosen RM are overwhelmingly happy and that is, ultimately, everyone's goal.
login to reply

By: Fastwong : April 13th, 2021-13:28
Have you actually seen a RM11 irl? I'm guessing the legibility arguments you've made here are based on pictures not experience. IRL the depth of the movement helps the hands stand above and distinct from what's below. Under more dynamic lighting the brushed and polished finishes helps the hands pop and once you've had it for a while your brain gets trained to look for those blocks of luminova on the hands or small date windows so that's it's not really harder to read than any other watch.

I do agree with some points like how useless the chrono seconds hand is half the time in that case shape and I'm not an RM fanboi but in this case I don't think the legibility is that bad and even if it was, I think when you start spending big bucks on watches, legibility might not always be that important anyway.
login to reply
By: chintu : April 13th, 2021-18:39
I have stated that my impressions are based on pictures at the start of my write up. I had seen quite a few of RMs in the metal but not the RM11. I chose this to discuss since the calendar and chrono complications are present and both are more wearer-engaging, than a tourbillon where there is nothing to read or operate but to merely enjoy the motion.
login to reply

Flat pictures posted don't do them justice, I wear an RM11-01 as a daily , most legible watch I have ever owned, one glance is all it takes to tell them time., yes there is a lot going on ,but its an annual calendar with a chrono & countdown , so it does many things. There is the lovely 3d effect in the depth of the dial...and even with my ageing eyes I can read the date & the stopwatch dials perfectly

So ok knock RM if you wish but really a stupid comment like 'cannot tell the time on these' is just ridiculous...I am not so keen on the later versions, prefer V1 as to be its just purer and less blingy ( if u can call an RM less blingy of course )…..but come on don't knock the ability to tell the time on it!

And utter tosh rubbish on wearing them just to show off, I love watches have a sizeable collection , and I wear them all the time walking the dog etc, I have them for ME no one else...If I go out to busy areas in general I tend to wear a Seiko or my apple watch, don't really like people seeing an expensive watch in this day & age, but you know 99% of the population doesn't know a casio from a RM, and has no interest....If you want to be noticed for being wealthy , wear a rolex that's the one 99% people recognise as bling

Shame when such great timepieces as RM has this negativity nowadays , incredible success story , and many great pieces, and yes to be honest many that are not my cup of tea, but that's true of any brand

Well Done RM I love your watches , pride of my collection , and yes I can also tell the time on them..bonus!! 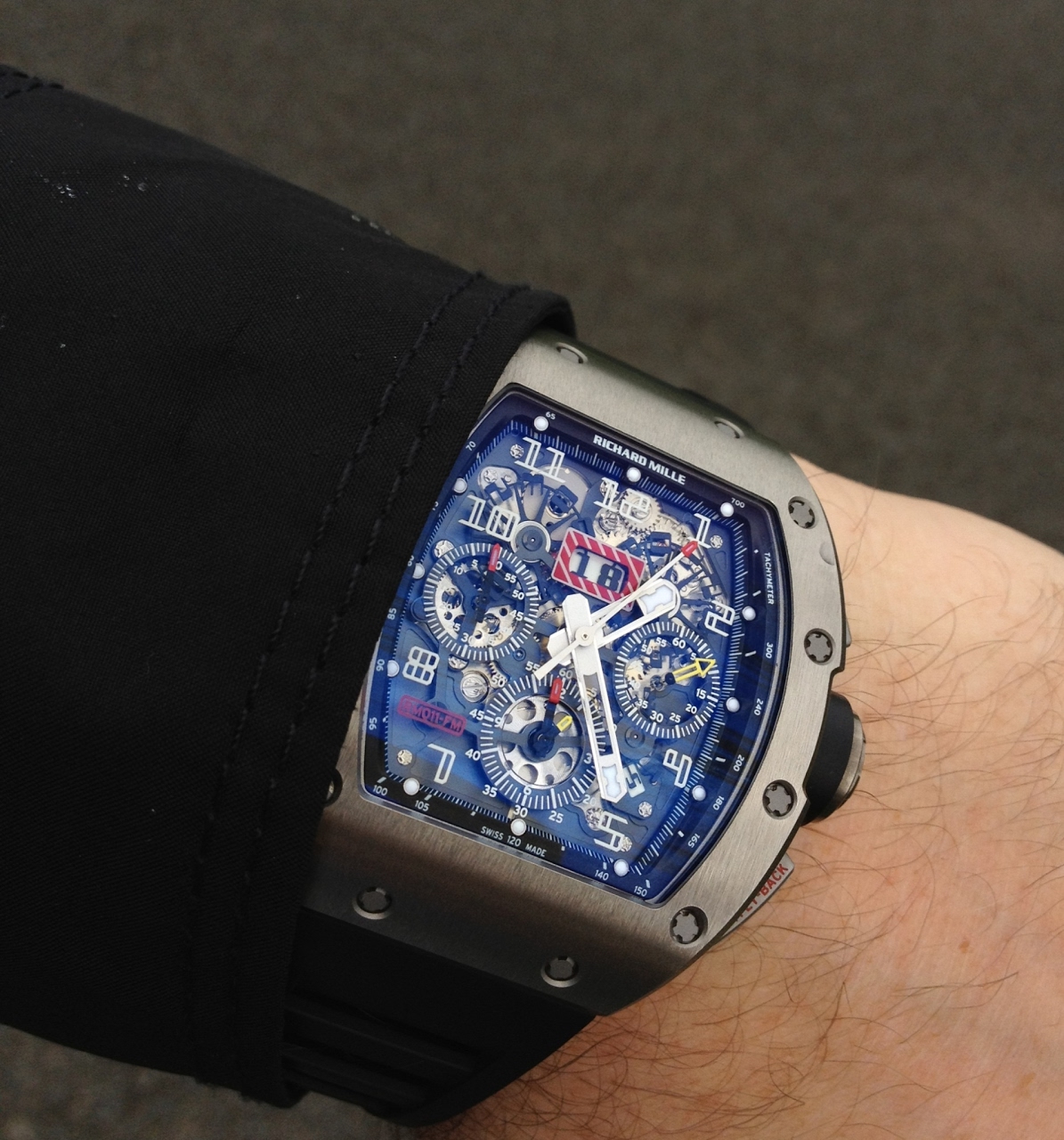 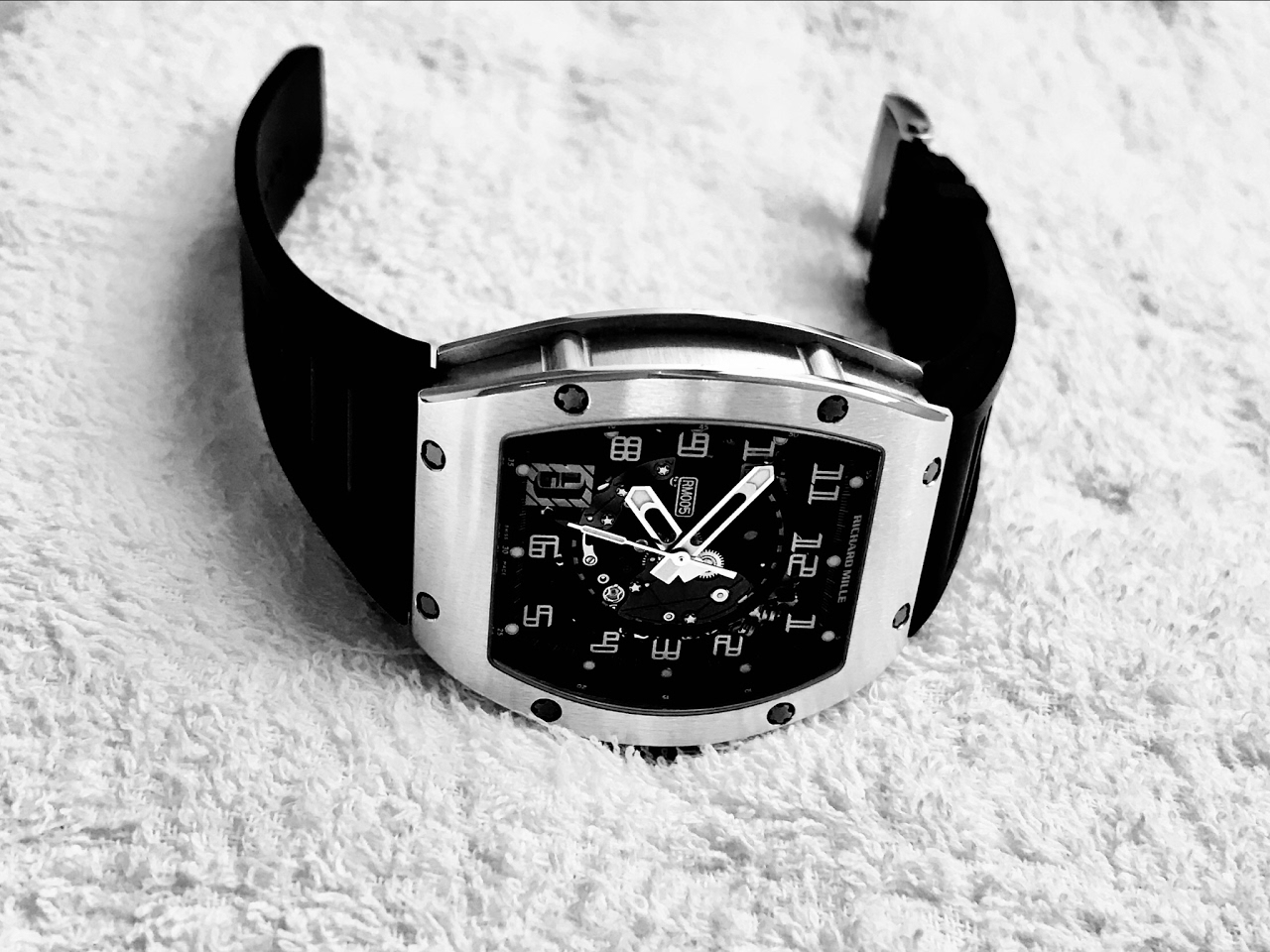 RM005, first RM automatic watch.
I bought a similar case size RM002-V1 last year yet to pick it up due the COVID restrictions.
Yes, RMs IRL are amazing watches. 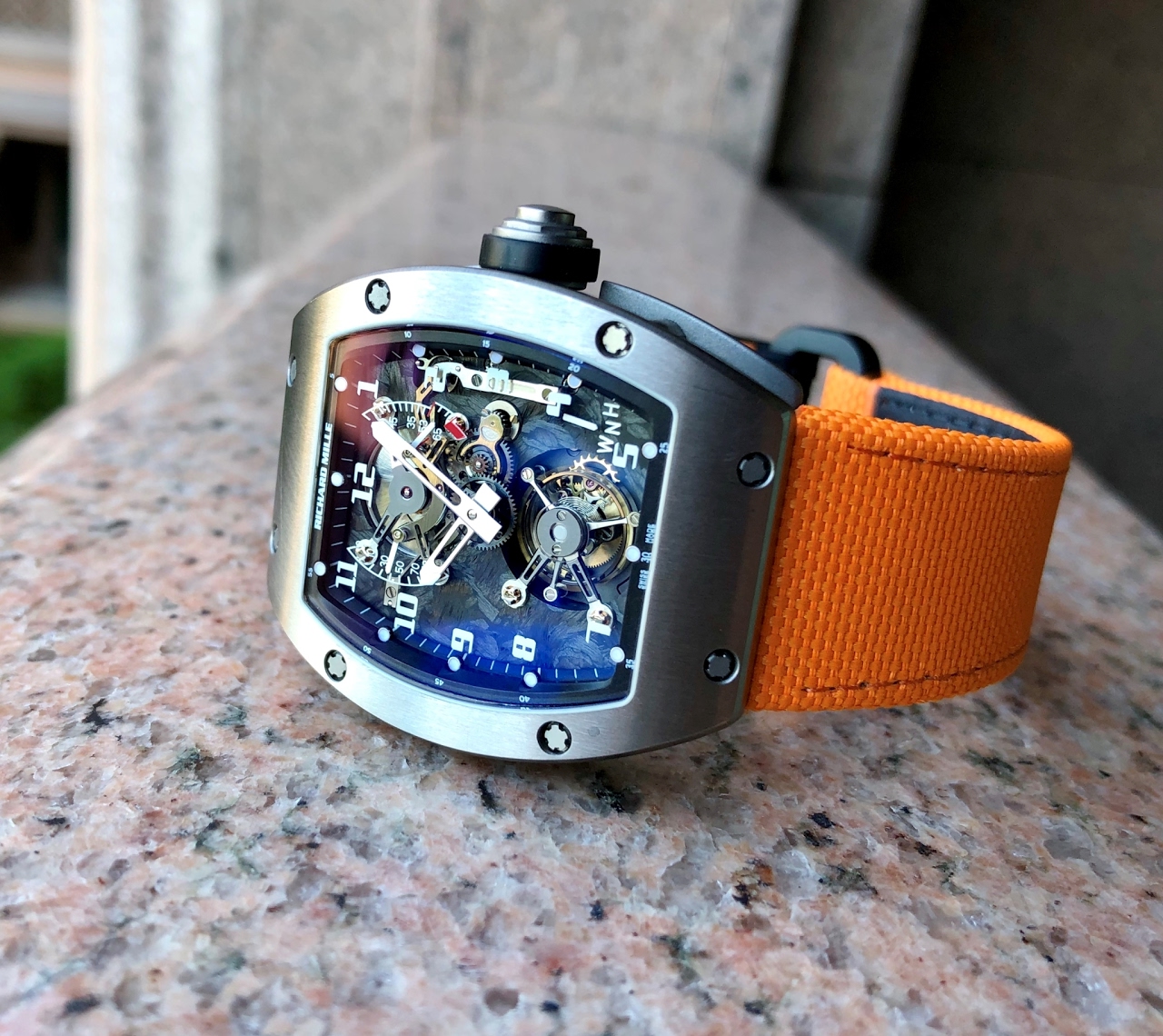