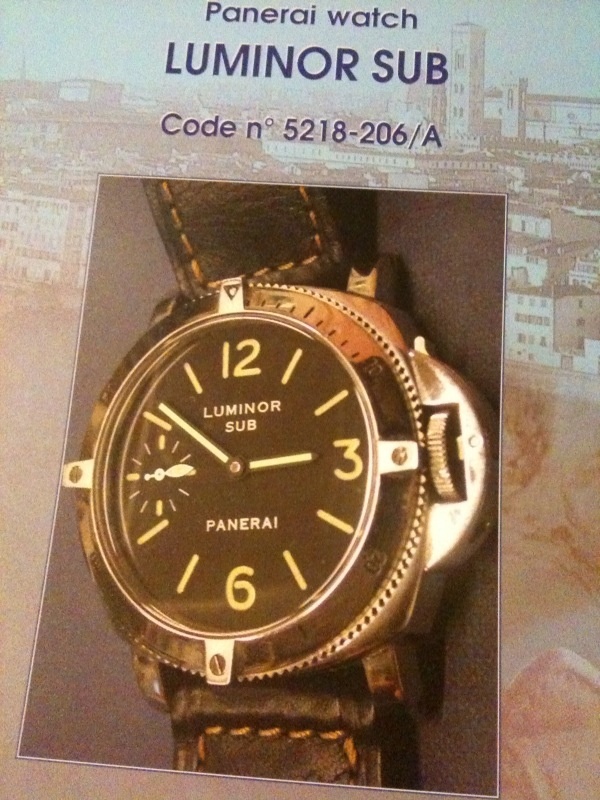 By: i_am_Sam : February 6th, 2011-09:54
I can't say it's a beautiful watch but attracted my interest as I've never seen or heard this particular model It is stated that the prototypes were supposed to be manufactured in 1997 but after the sale of the company, the order was not carried and the w...
login to reply

I've never seen a pic of this Panerai before. Hopefully our vintage experts here know [nt]

What I've learned so far

By: Ares501 - Mr Green : February 6th, 2011-10:26
about Panerai is a) Panerai has very complex sometimes murky history (but that is big part of it's charm) b) you mustn't trust everything you read in books about Panerai (this reflects not only to Panerai books) Best Damjan P.S. I'm not Panerai vintage ex...
login to reply

By: amanico : February 6th, 2011-11:32
There was a transitional period at the end of the Pre V era, and at the moment when Cartier Vendome bought the brand ( March 1997 ) They bought the brands, and received, with the brand, the projects, and among them, the " Projetto Slytech ". POY wrote szo...
login to reply

Well Nico, sorry to say, but no, here I have no knowledge of this creation ;-)

Well, that's 5 pieces too much

By: PoyFR : February 6th, 2011-12:14
Although the watch was a plan in 1996, nothing was drawn or scheduled. To my knowledge and my late relationship with most important members of Officine Panerai in Firenze till 2003, this watch was not produced nor prototyped, well at least till 2003.
login to reply

By: John HS : February 7th, 2011-03:02
you never knows what is/are ever produce, If u are lucky or fortunate to get the the ''List'', then u will know. Again, some said this list does not exist. Personally , just read about it and do not ponder too much. Regards John
login to reply

So how many of them were made?

By: i_am_Sam : February 8th, 2011-07:24
And I'm assuming its not produced with the authorization from Panerai? Just curious Best, Sam
login to reply

This is typically the kind of post where silence is golden.

never seen this one either.!

Not sure about that Tony...

well, gotta go with what the Book Says.

Sam, may I ask what book?

By: PoyFR : February 22nd, 2011-00:57
More info about 5218-206/A (not produced under Panerai Firenze or Cartier/Vendome) In checking all my information about this watch, I can provide more info for those interested. I can confirm that this watch was not produced nor delivered to anyone at PAN...
login to reply

Thank you for the information POY!

By: i_am_Sam : February 22nd, 2011-03:25
I really appreciate your answers. Now we know that this one WAS INTENDED for military purpose. Thanks again cheers Sam
login to reply

By: BDLJ : February 24th, 2011-21:08
I missed this post and instead asked Nico the question I'm about to ask you Do you have any details of why the bezel would need maintenance? It doesn't appear particularly interesting (or legible)
login to reply

Not all can be said simply to avoid further new births... ;-)

By: PoyFR : February 25th, 2011-02:15
This watch was intended and destined solely for military use. Part of the specifications was that the rotating bezel could be locked at any given position, this to avoid any accidental mistiming. The bezel once positioned at any required position it would...
login to reply