Still digesting the new Lange, in the meantime a distraction.

Not a watch I wear often, perhaps less than 10 days in over a year since I took delivery / ownership.

That said, each time I do see it (in the safe while swapping out others or as in this case on the wrist) I just can’t help but smile.  Not simply because of the “face” staring back at me but also because I think the combination of the crisp white dial and the red accents just really pop and work well together.
It is also a real star in terms of playing with the light; it’s one of those dials that catches a glimpse of light and really shines. 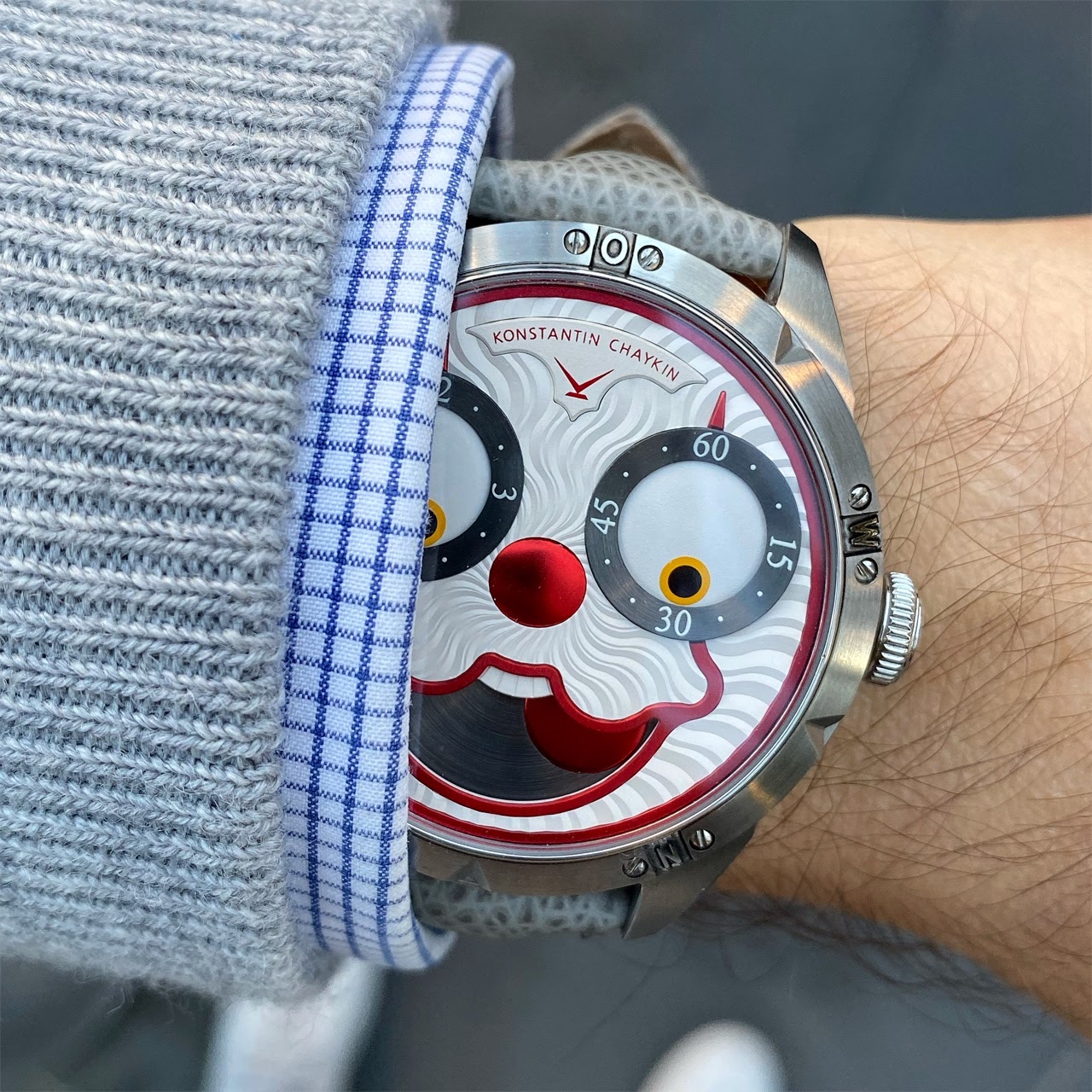 Still digesting the new Lange, in the meantime a distraction.

By: Jay (Eire) : October 24th, 2019-08:23
Not a watch I wear often, perhaps less than 10 days in over a year since I took delivery / ownership. That said, each time I do see it (in the safe while swapping out others or as in this case on the wrist) I just can’t help but smile. Not simply because ...
login to reply

It’s just not an everyday watch, it does catch a lot of attention.

I like it very much It's also even better looking than the version with green. [nt]

That is the most perfect Halloween watch! [nt]

Yes, I’ll likely pull it out again next week. [nt]

IT: Chapter 2 would be more appropriate, since the clown face is based off of Pennywise! [nt]

By: waitlisted : October 24th, 2019-10:53
I hesitated between the joker and the clown and ultimately chose the joker, but the clown is great too (though I think my favorite so far might be the dracula - but that’s 13 pcs and all sold out). I assume you ordered this direct through KC - how were th...
login to reply

By: Jay (Eire) : October 24th, 2019-13:08
Yes, direct from KC. I’d met him in 2017, tried on his Joker and was satisfied the size was OK. Talked about doing something slightly customized with the Joker but then settled on the Clown. Communication was a little less than smooth, explained by langua...
login to reply

By: Spencer Karrington : October 24th, 2019-13:09
Pun intended. In all seriousness, love the watch and the work that Konstantin has done. Congrats
login to reply

By: Watchonthewrist : October 24th, 2019-13:10
Like you said about your clown the same feeling i get with my Joker . When i see it next to my other watches in the safe it gives me a huge smile on me face . Thats why its def a keeper
login to reply

Yep, and the thing we search for in many higher brow or more technical pieces is also that same smile.

Credit to Apple for that, and some good autumn time light! [nt]

By: mrds : October 25th, 2019-03:05
...that the first time I saw it, I just thought "what a cheap, loud joke". The in-your-face dial led me to ignore the quality and craftmanship behind it. Now that I know more about it, I really appreciate the quality of it and, most of all, the guts of Ch...
login to reply

I will say the it was the opposite for me, I was immediately sold on it.

By: Jay (Eire) : October 26th, 2019-05:26
My hesitation on the first run was the size of the case, I thought it might be a little too big. Not until I had the chance to put one on the wrist was I happy with the size. By that time the original Joker run was long sold out. A watch like this, for a ...
login to reply

By: serg70 : November 7th, 2019-01:22
should try other watches from Konstantin. I love Cinema, but unfortunately it is to big for my small wrist... As well as Lunokhod )) WBR Serge
login to reply

I have had the Cinema on the wrist too.

By: Jay (Eire) : November 8th, 2019-05:55
Before I ordered the Clown I was lucky enough to be in the same place as Konstantin (and his watches). I like the Lunokhod Prime a lot. Nothing else like it out there.
login to reply

I am with you all the way.

By: mrds : November 8th, 2019-08:57
Although there are many modern temptations as well, we need these classic beauties!
login to reply