The Tank was Louis Cartier’s bright idea to give a watch the shape of a rectangle in 1917, at a time when timepieces were round. From 1917 to 1936, it saw multiple incarnations. When it appeared in 1936, the Tank Asymétrique watch – also known at the time as the Parallélogramme or Losange – marked a break with tradition: unlike any other watch, it questioned the established order of things.

Everything on the dial was shifted 30 degrees to the right. The rectangle of the original Tank became a diamond, with the 12 placed in the upper right-hand corner of the case and the 6 opposite. Instead of Roman numerals, Arabic numerals – and only the even digits – appeared, all separated by indexes. The torsion effect was such that a specific strap needed to be developed for the watch. In addition, certain models saw the axis of symmetry in the centre of the watch replaced by a special insert. This detail, which had nothing to do with aesthetics, was unique to the watch, making it highly rare today.

With its two horizontal shafts connected by two oblique ones, and its numerals off-set by 30° to the right, the presence of this new Tank Asymétrique on the wrist is striking. In its refined volume, Cartier watchmakers have included the Manufacture 1917 MC movement, a noble movement due to the beauty of the manual winding gesture.

On the dial, the Arabic numerals and their separating indexes have been completely redesigned. The watch is available in pink gold with a grey dial and strap, in yellow gold with a champagne dial and brown strap, and in platinum with a silver-coloured dial, ruby cabochon and grey strap. The made-to-measure straps are fitted with an ardillon buckle. 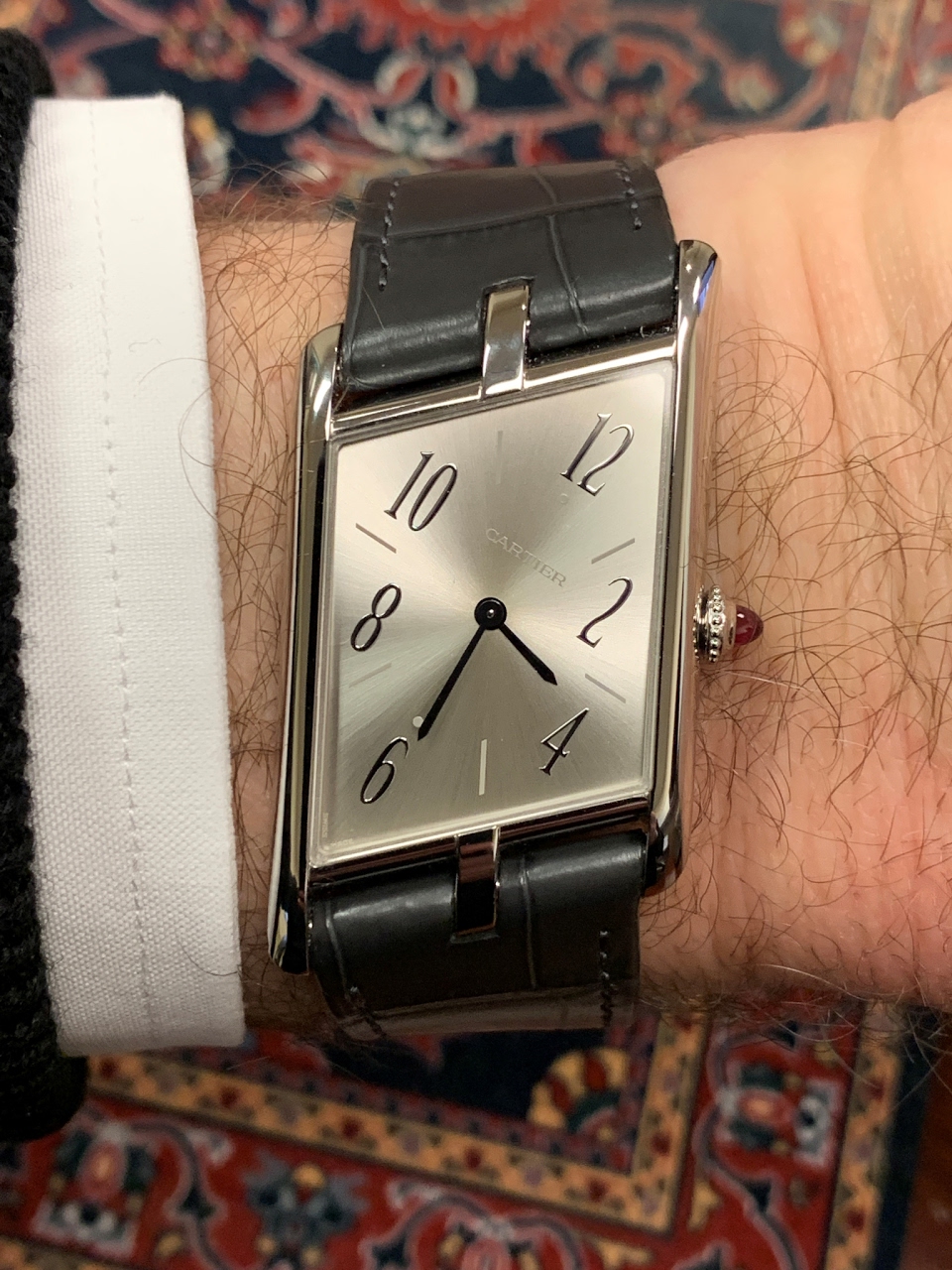 Wow, very elegant. I love the red cabochon a lot, too.

By: Gelato Monster : January 5th, 2021-16:01
it is so elegant but funky yet congruent. I honestly like it better than other elegant but asymetric case shape design
login to reply

I start to wonder if you are not right... I am impressed by this watch, a lot.

I meant lets say between this vs VC asymmetry 1972

By: woodman : January 5th, 2021-17:28
may I ask why you chose platinum version? I am torn between yg and rg version... have deposited for rg, but yg seems to grow in me. rg with grey sunburst dial isn't quite "orthodox" choice, but I thought it added chic to it and some youthfulness. On the o...
login to reply

I am a fan of the platinum Cartier Prive references

By: CrookedOak : January 6th, 2021-10:30
with the ruby cabuchon. I have had the good fortune of acquiring the last few references released in Platinum. I don’t think you can go wrong with any of the options and agree that the RG is unique and a great choice.
login to reply

The Tank Asymetrique is fantastic

By: Geo : January 5th, 2021-23:13
and actually much more wearable than a Crash watch. This platinum version is stunning, with that ruby in the crown. Huge congratulations! George
login to reply