I wonder that it has not been more widely discussed yet in specialist Forums or Blogs that Karl Lagerfeld is a very long time owner of an AP Royal Oak Jumbo A-Series.

First hand evidence is given by himself in an interview in the "AD - Architerctural Digest" Sept/Oct 2011, page 64-66. KL is asked, whether he has an obsession about particular design objects. His answer (losely translated from the original French interview): (...) "but yes, I have some fetish objects, for example my watch which I wear since 35 years, a Royal Oak"(...)

The special thing about his A-Series Royal Oak is that IT IS COMPLETELY BLACK. As we know, KL - for most of his life - only wore two colors in combination: black and white. The story that I found out is that he had - ordered or been given - several AP RO A-Series, 1973 and 1974 which he wore himself and some of them he gave to very close staff.

I did some research into publicly available material and will try to attach pictures as follows:

- An early Picture (April 2, 1979) total and detail where the black AP RO is very well visible

- A still Picture from an October 23, 2003 interview on Television

I had a few years back the opportunity to get "the" / "one of the" KL black AP RO. It is an A-Series (A-12xx), delivered in 1973 to Italy. I assume that KL got it as a present as he gets so many things as a present like his cat, his Rolls Royce etc. I assume the watch has been blackened in Italy before being given to him. But this is speculation. The person however I bought the watch from knows that it comes from the KL "entourage".

Hope this is of interest 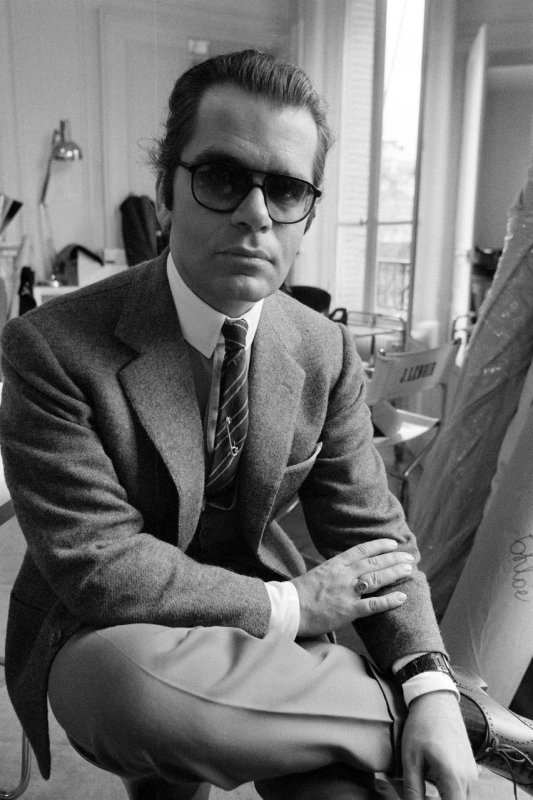 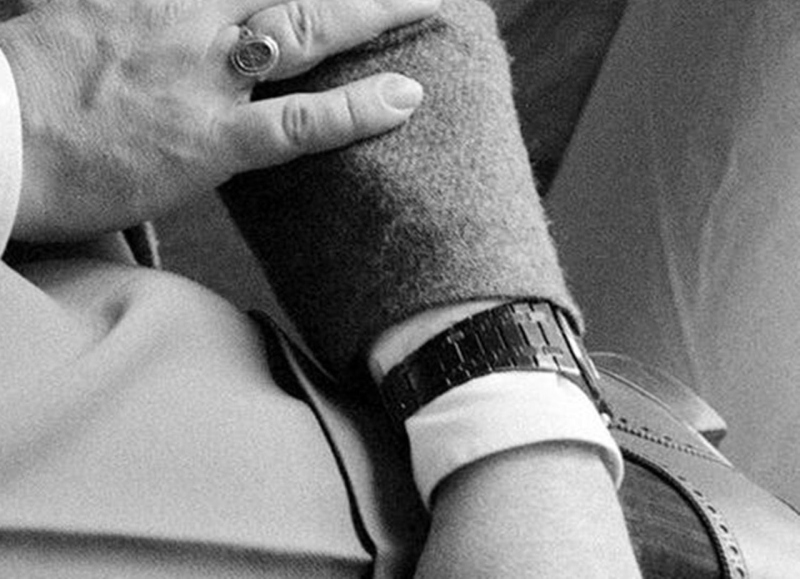 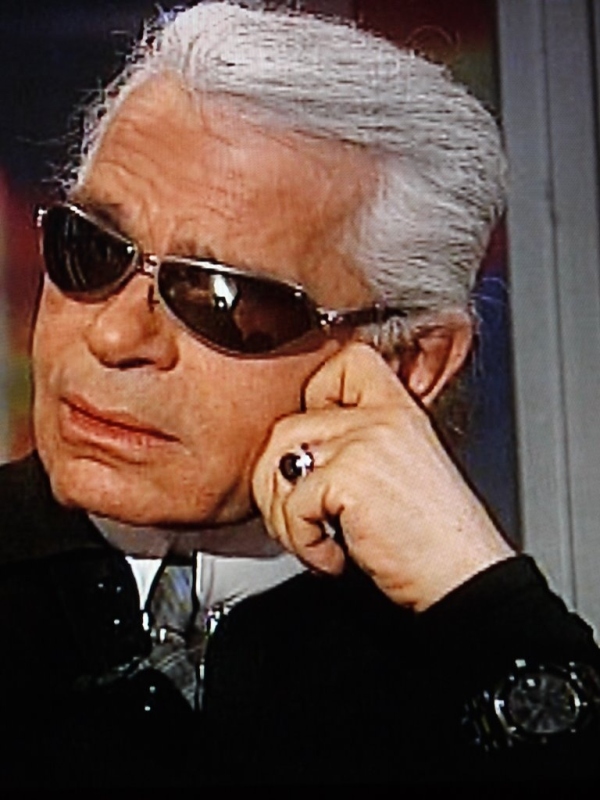 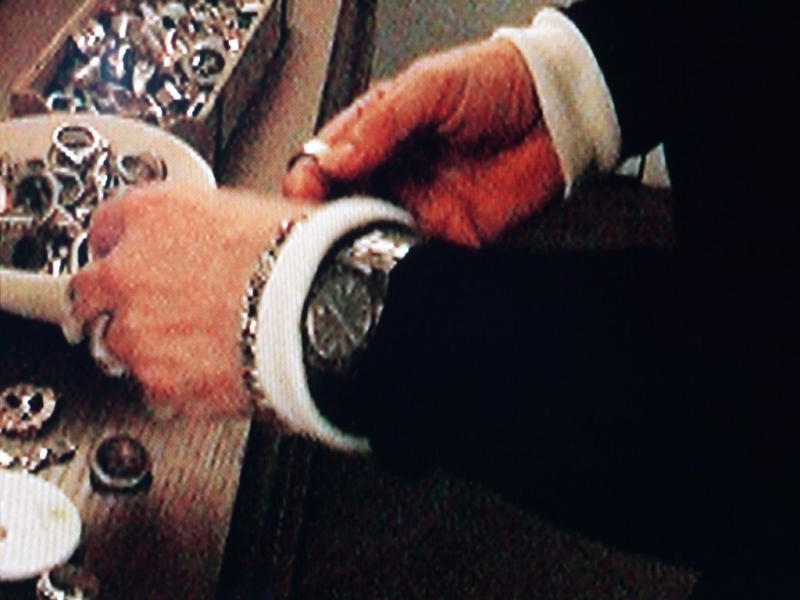 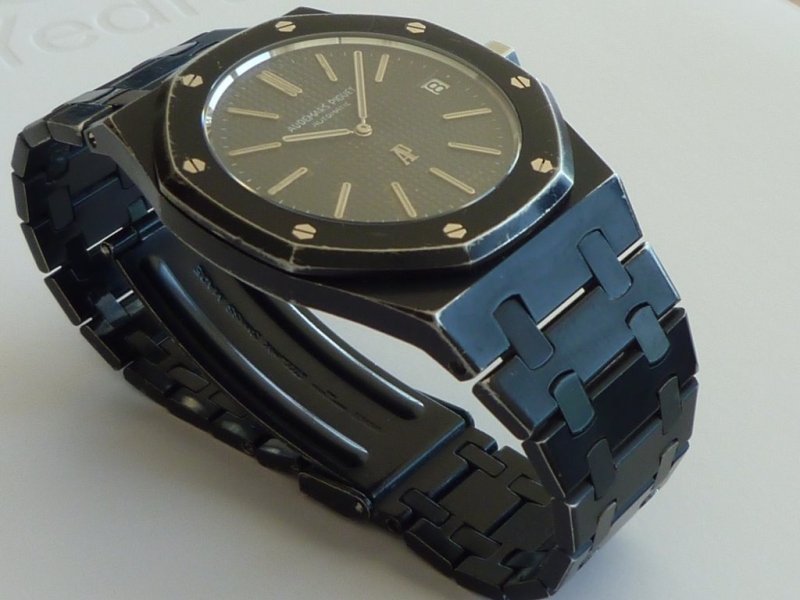 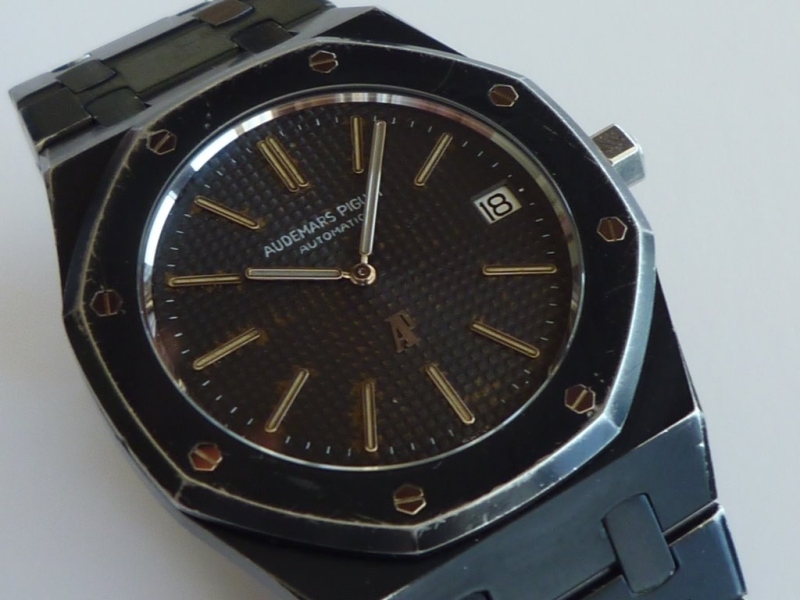 By: HSTE : February 19th, 2019-17:09
I wonder that it has not been more widely discussed yet in specialist Forums or Blogs that Karl Lagerfeld is a very long time owner of an AP Royal Oak Jumbo A-Series. First hand evidence is given by himself in an interview in the "AD - Architerctural Dige...
login to reply

would like to continue learnign about this, had NO idea!

By: HSTE : August 16th, 2014-00:42
Thanks to all for your feed-backs! What info can I add? Not much more than I already gave: Production year 1973, delivered according to the extract of archives of Audemars Piguet to Italy. I had the watch overhauled by AP as there were some issues with th...
login to reply

A super piece of History. Thank you so much for these pictures and this memorable post. [nt]

Thank you for these additional photos

By: Ancienne Le Brassus : August 16th, 2014-14:25
Really quite an amazing piece. You've added a completely new chapter of info on the mystique of the AP RO!!! I wonder how the watch was blackened? Was AP able to say anything about that, as it doesn't look like the black is worn off in between the bracele...
login to reply

Great post! As for your black Royal Oak, what provenance! [nt]

By: patrick_y : August 4th, 2014-06:29
Karl Lagerfeld, an amazing individual. A true trendsetter. Hmm, how would an all black Royal Oak look on my wrist?
login to reply

By: deadsetchamp : August 4th, 2014-16:15
Interestingly, in a Hodinkee article about Jack Heuer today, he mentions the inspiration for the PVD black Monaco was seeing Spain's King Juan Carlos I wearing a black Royal Oak.
login to reply

Fascinating historical traces... even all the scratches and blemishes...

By: Ornatus-Mundi : August 5th, 2014-12:16
add a lot of character to this watch. Its true to his persona, and like the watch also KL wears the scars and crinkles with grace (most of the time ;-)). And, again like the watch, he does not (really) age! Attached an image of the very first AP RO I had ...
login to reply

By: Ancienne Le Brassus : August 16th, 2014-14:29
What I like about this shot is how the edges of the octagonal bezel shows they are still very sharp, very nice!!! Great piece, great side-by-side comparison... I wonder if you've gotten any strange looks by people when you wear this! ;) S
login to reply

Welcome to PuristSPro and the AP Forum!

By: MichaelC : August 6th, 2014-07:47
I hope you will continue to post and contribute. There are other well known persons that wear fine timepieces that we don't discuss either. My personal interest is always in the brands and watches themselves, and not who wears them. But this is the wonder...
login to reply

By: only5402 : August 6th, 2014-10:06
i don't saw or hear some real interresting news about these old royal oaks 5402, this post and the watch is really a bomb, a watchquake! super strong Congratulations Stephan
login to reply

Gladly, History cannot be re written when it had been seriously written. ;)

I wouldn't go for it, the blackened RO. It's like wearing charcoal on your wrist.

By: geross : February 20th, 2019-00:14
With the Aquanaut it's different. It's got a rubber strap and is more a chic Diver's watch. The assymetrical dial, makes it a lucky watch, the Aquanaut. The RO also but all blackened it's a watch for the queer guys. My opinion, no offense. Rip, Mr. Karl L...
login to reply

Extremely interesting, unique story, thanks for (re-)sharing! I just saw Hodinkee has also picked it up and made a link to this article. [nt]

Does the love for the AP Royal Oak mean the king of style did not trust his skills designing a watch for himself?