Here it is the 25th Anniversary Lange 1

LANGE 1 "25th Anniversary"
White gold with dial in argenté
Reference: 191.066
The LANGE 1 "25th Anniversary" is the prelude to a special edition on the occasion of the 25th anniversary of the LANGE 1. Its dial features recesses, deep-blue numerals, markers and date numerals. The hands are made of blued steel. Further hallmarks include an engraved white-gold hinged cuvette and a balance cock, hand-engraved with the outsize date and blued lines.
Price: 43.700 €*
*Recommended retail price in Germany including VAT. Non-binding quotation, prices subject to change. 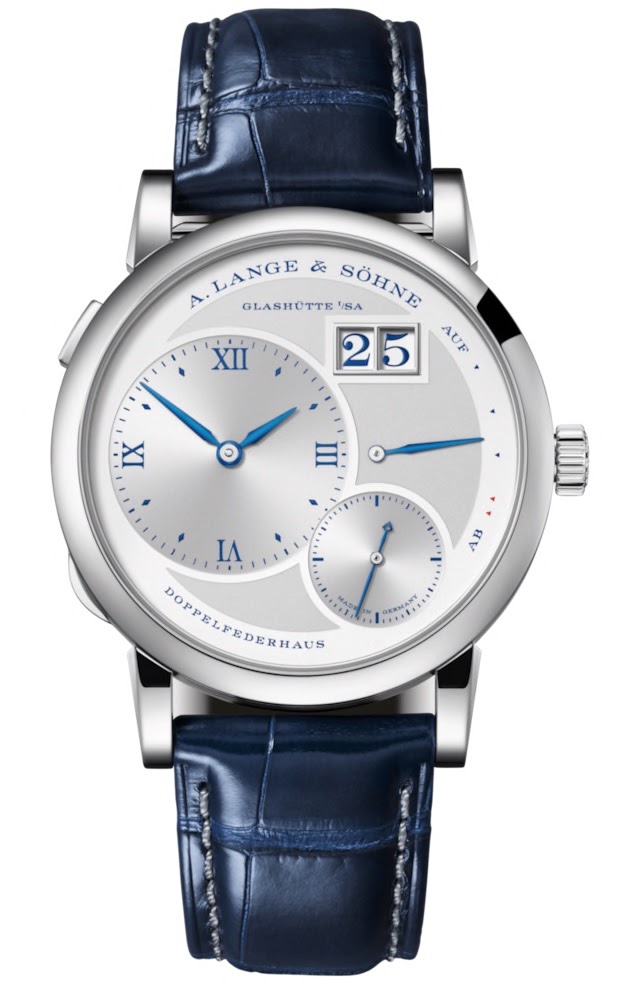 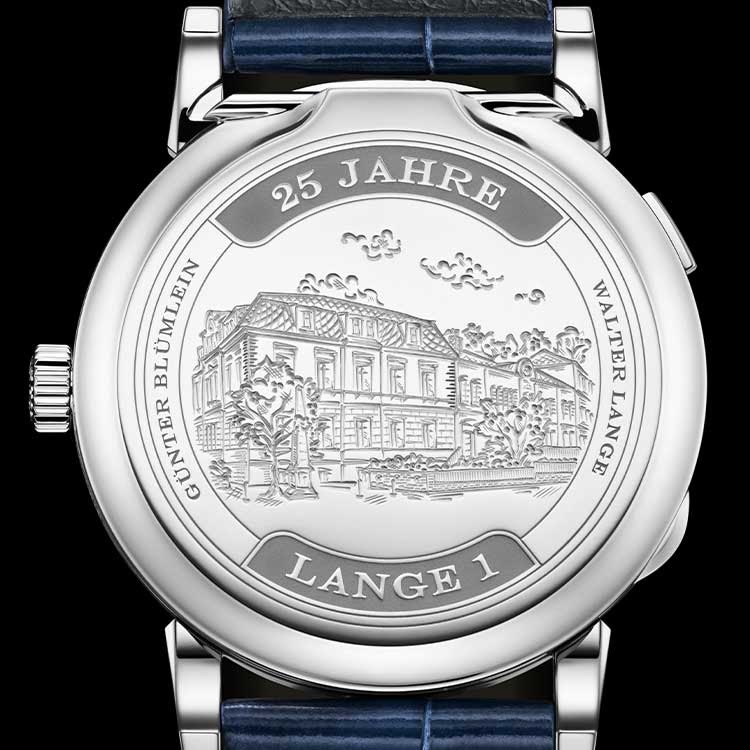 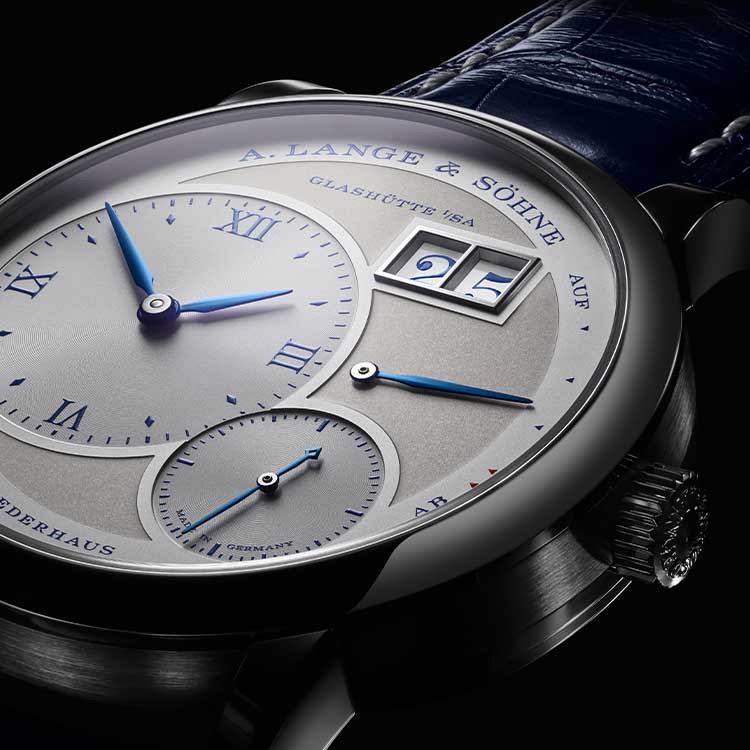 Here it is the 25th Anniversary Lange 1

By: COUNT DE MONET : January 10th, 2019-06:07
The term is: mondän, and means lavish, pompous or swank. If I use the nearly same looking word mundane from English, then I am left unimpressed by this piece. Maybe in real live it is convincing but on pictures not really. Ans I think I know why Lange hel...
login to reply

I just read this small text on the Lange website

By: Maltie : January 10th, 2019-06:17
An additional limited-edition model from this historic family of watches will be unveiled each month until 24.10.2019, the date of LANGE 1’s anniversary.
login to reply

Seems like there will be 10 models this year! OMG!

By: chrono.logy : January 10th, 2019-06:29
Here is the text from Lange website : "In its anniversary year 2019, the manufactory salutes this exceptional timepiece with the white-gold “25th Anniversary” edition – limited to 250 watches. The collection of ten different models, which will be launched...
login to reply

Your forgetting the Zeitwerk. There will be one I'm sure. [nt]

Agreed - but not in this series?

By: colton_d : January 10th, 2019-08:53
The zeitwerk will be getting something for its 10th anniversary, however the press release from Lange said it would be 10 editions of the Lange one to celebrate 25 years. I may be misinterpreting the wording, but it seemed like they would be giving the ar...
login to reply

By: Arie - Mr Orange : January 10th, 2019-06:55
on the other hand, if you are looking for something special but still 'under the radar' this could be it. Do like the hunter caseback tho.
login to reply

Indeed boring, for a company that has as motto “Never stand still”. This is another showcase of a stand still if you ask me. [nt]

Apart from the hunter case. That is a nice gimmick.

What were you expecting? Some groundbreaking new tech?

By: zabreg1 Mr White : January 11th, 2019-09:12
For a relatively young company, they have achieved a tremendous amount of technological advancement. Not just with their ground breaking opening salvo back in '94 and the designs they showcased. But Dato chrono movement, PLM line, Triple Split last year, ...
login to reply

By: Arie - Mr Orange : January 11th, 2019-09:46
I didn’t know they were doing 10 new editions this year. So that is quite an effort. So I’ll retract the meh until the end of the year. If it would have been just this version i would have thought: meh & boring. Obviously (or perhaps not obviously) not im...
login to reply

Yes, I think the Zeitwerk will be interesting as well.

By: zabreg1 Mr White : January 11th, 2019-10:38
As for the looks of this (or really any) model, that's subjective anyways. But I trust Lange will have something absolutely WOW this year. No idea what, can only dream of either something in steel or an MR.
login to reply

By: Arie - Mr Orange : January 11th, 2019-10:56
that would be a huge bombshell. And if Lange wants to get to fish in Patek waters they do need an extra push. If done right only a steel (hard to get) sports model will get you there. On the other hand....maybe Lange should simply stay on this path and le...
login to reply

What in the world do you mean?

That is what I mean.

Hey, if it was boring, you wouldn't have gone back there recently... [nt]

And the way you did it.

I wonder if the building on the outer caseback is hand-engraved...

By: Arie - Mr Orange : January 10th, 2019-07:05
They never advertise that kind of production methods in the watch industry do they?
login to reply

By: Speedie74 aka Mr. Torquise : January 10th, 2019-09:30
I am not a great fan of the artificial limited editions.. The engraved big date on the swan-neck regulator is a little weird and I am gettin also a little bit full of the blue colour... And the price premium is quite heavy comparing the serial production ...
login to reply

Interesting. I would think this is right up your alley, GRRRRRR. [nt]

The hinged back is another very cool detail. Nice, Classic. A good one. [nt]

It was time to commemorate GÜNTHER BLÜMLEIN, he is the real LANGE. Walter Lange, 25 years ago, did not do anything more than give his name for money.

By: Walter2 : January 10th, 2019-14:57
The idea, the concept, the company formation, the first watch - Lange 1 - all this was Günther Blümlein. Also they have to remember the watchmakers of IWC and Jaeger le Coultre, Renaud Papi, Andreas Strehler, without their work we would never have seen a ...
login to reply

Nice, but 10 different limited editons this year for L1 alone?

By: emcquillan : January 10th, 2019-16:55
Even if the series of 10 adds up to only 1000, I don’t know how special that is from a manufacturer that produces around 5000 pieces/yr. I hope some of the upcoming nine have new movements and/or special dials. I’m feeling marketing fatigue.
login to reply

My initial thought was the same, with 10 "editions" what will the total number be relative to overall production.

I agree, but i think it works. I dont know why, but may be a lot of people think LIMITED EDITION is something special. [nt]

This watch has one of those Lange dials that's impossible to evaluate from the press photos...

By: CR : January 10th, 2019-18:29
I'm suspending my judgment until I see it IRL (and not under boutique/jewelry store lighting conditions), because I've been wrong too many times before. This could be really spectacular in person ... or not.
login to reply

Looks beautiful to me . Love the bleu indicators and that stunning engraved hunter caseback [nt]

By: Langepedia : January 11th, 2019-02:19
A beautiful tribute and execution for Blumlein, finally! Other than that, I agree with CR; the treatment on spaces need to be seen in real to judge. I do like that, not a wow factor or something but probably cool. I also agree with Maltie; a more daring a...
login to reply

Except for the unique engraved caseback...