L.U.C XP Urushi Snake for Year of the "little dragon"

Jul 12, 2013,06:08 AM
2013, L.U.C issues another special XP Urushi piece with Yamada Heiando, a top purveyor of tableware to the Japanese Imperial Household and a top Urushi Master, Mr. Kiichiro Masumura, who is also a Japan's  "Living National Treasure" in traditional lacquerware crafts to commemorate the year of the Snake in the Chinese zodiac.

Similarly like previous series of the XP( extra-plate) Urushi Snake, the calibre is the ultra-thin  automatic L.U.C Calibre 96.17-L with solid-gold micro-rotor and double-barrel to enable the XP Urushi with 65 hours of power reserve contained in the 39.50mm 18K gold case.

Words will be difficult to describe the beautiful and detailed dial-work by Master Kiichiro Masumura.  Even pictures may not do justice, but the pictures below will certainly hope to try.


Please note, there is a layer of protective plastic-wrap thus the colours and tone will be a tad subdued. 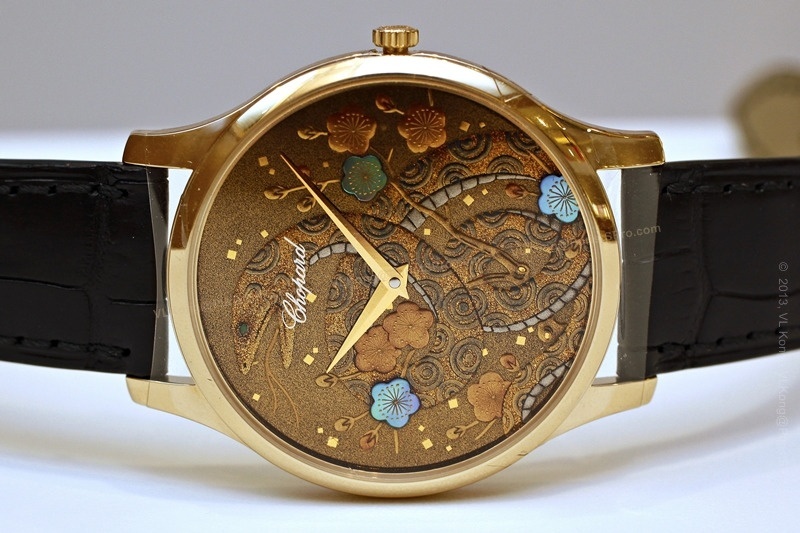 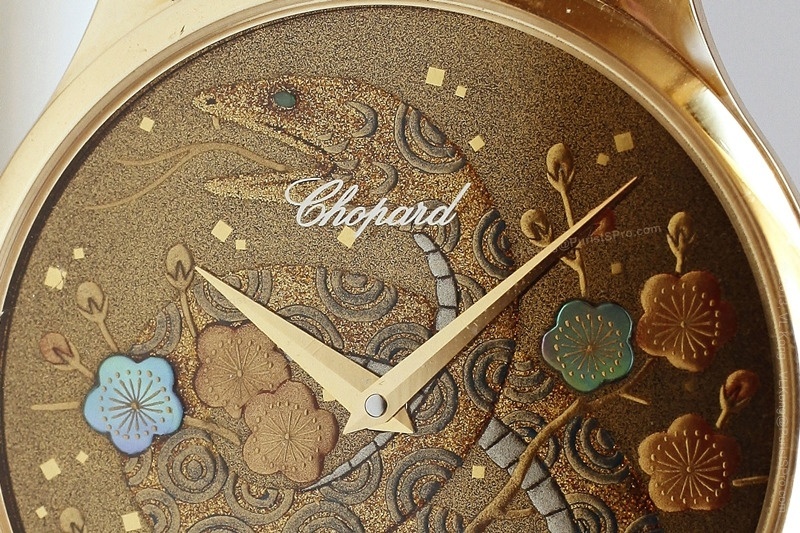 I feel to enjoy the beauty and intricate work of maki-e, a single task light source with dim ambience is sufficient.
Moving the light source will enable the details of the master work to evolve and open up. 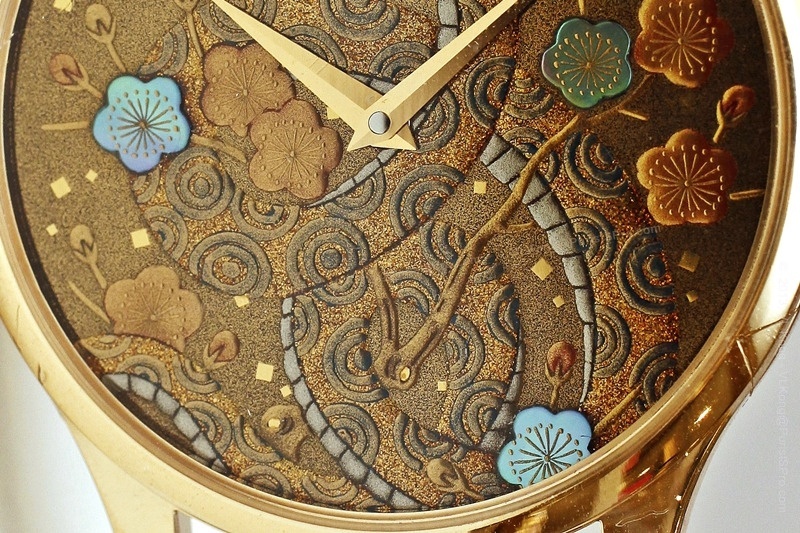 The volume and layering of the maki-e will appear with slight shadow details.  The iridescence from the radens of  three flower-motifs and the eye of the snake will change with different light angles. 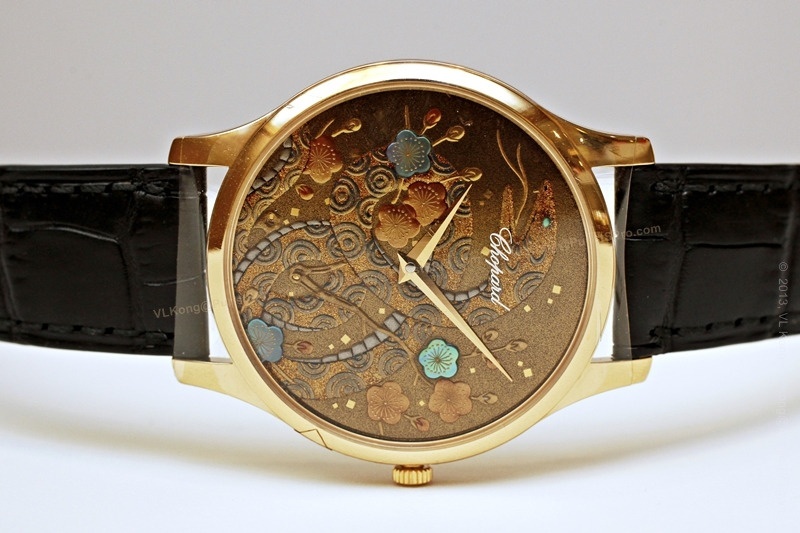 The eye of the snake glows with life (in the above picture) at certain angle.

Would be nice if the white Chopard logo is less conspicuous.  Perhaps, should explore other way to mark the watch like engraving on the back of the  sapphire, which the logo only visible at certain viewing angle or think of another place to place the logo which could blend harmoniously with the beautiful dial. 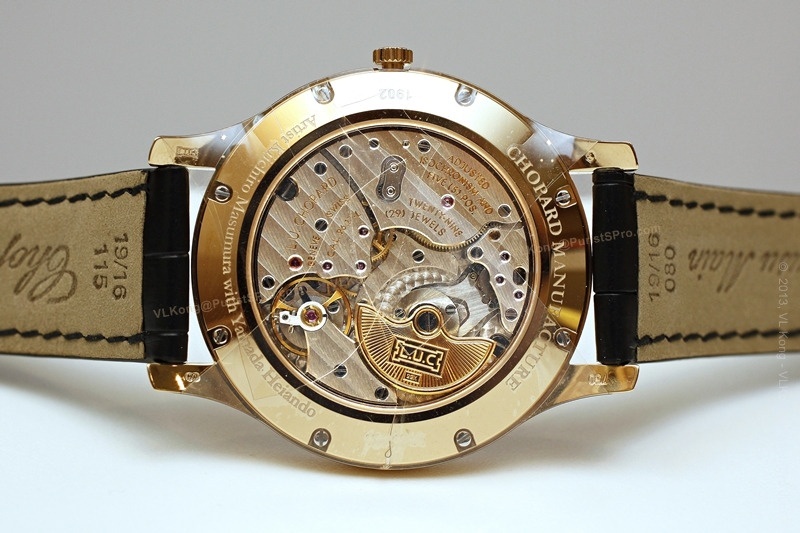 
Another stunning piece from the L.U.C XP Urushi Series!

L.U.C XP Urushi Snake for Year of the "little dragon"

By: Kong : July 12th, 2013-06:08
2013, L.U.C issues another special XP Urushi piece with Yamada Heiando, a top purveyor of tableware to the Japanese Imperial Household and a top Urushi Master, Mr. Kiichiro Masumura, who is also a Japan's "Living National Treasure" in traditional lacquerw...
login to reply

By: MTF : July 12th, 2013-09:11
Thanks for the photo report. I just noticed that each piece may be different depending on the eye and brush of the Master. The colours of the flowers can be changed at will. The Snake is an interesting Zodiac animal because It is considered both good and ...
login to reply

By: masterspiece : July 12th, 2013-14:20
for another great report. I am always amazed and pleasantly surprised of what a creative person can do on a two dimensional plane, regardless of its size. This clearly establishes that the intricacies of handcrafted design can only be done by a true Maste...
login to reply

By: Kong : July 16th, 2013-08:30
Good to hear from you, Bob! Indeed, true masters can transform 2D plane to 3D. Unbelievable, seen some of the pictures Ansel Adams had taken. I hope everything is fine with you. Kong
login to reply

The photos are well taken, showing the

By: mell0822 : July 12th, 2013-17:51
fine craftmanship of the Japanese masters, despite the protective layer of wrapper. But I still prefer my "five-goldfish" ;p Melvin
login to reply

Superstition got the better of me ;p

By: ling5hk : July 17th, 2013-18:20
After seeing too many dragons, this beautiful snake is so refreshing. To me, the word "chopard" would be nicer if it is written in gold. Thanks for the post. Regards Ling
login to reply

By: Kong : July 17th, 2013-20:59
for Chopard logo, may work, as it is likely to blend with the maki-e to be inconspicuous, less distraction. Observing the Namiki Yukari Collection, company logo is only on the 'ball' clip... since the crown is signed L.U.C , that should be sufficient. Eve...
login to reply