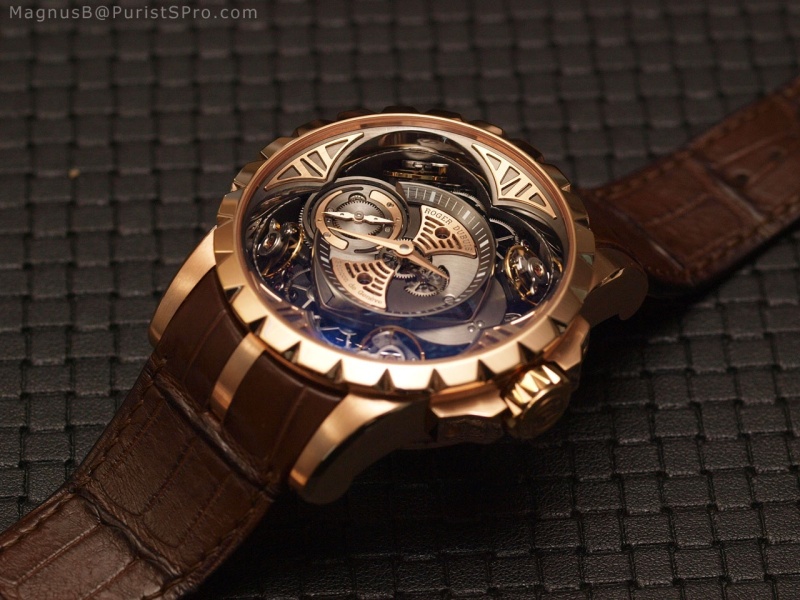 In short, the watch concentrates on the key tasks of a watch, that is to keep time as precise and as consistent as possible.
To this end, the Manufacture Roger Dubuis invested 7 years of research. The outcome is a pièce de résistance featuring:
The overall goal was to balance the influences of gravity on the movement in real time. The four carefully positioned sprung balances work in pairs to compensate immediately for the rate variations caused by the changes in position. What the tourbillon achieves over the course of a minute, the Excalibur Quatuor achieves instantly.

Complementing its chronometric performance Quatuor also employs a sophisticated power reserve indication which displays the remaining autonomy with very few mechanical parts needed. The price to pay is actually that both power reserve hand and dial move in the same direction (something we have seen on Nomos watches, for example) giving a interesting twist to the display. 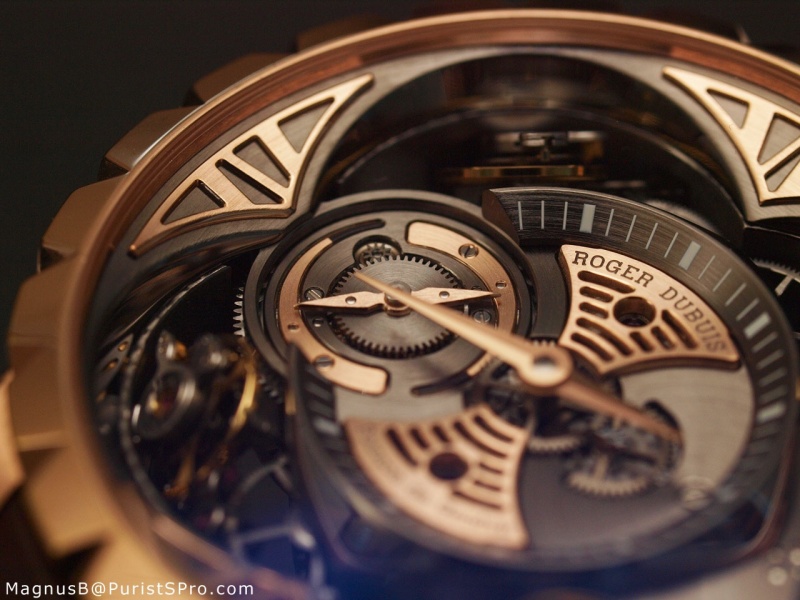 I will go through this with the help of the teasers I posted during entire January. For now here are the technical details.
Best,
Magnus
Technical Data: 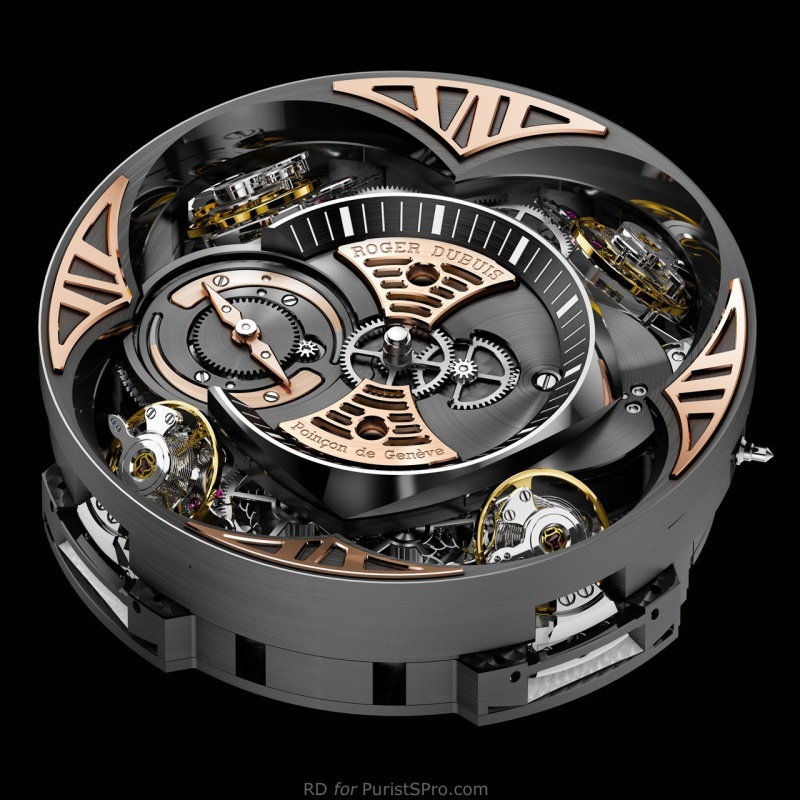 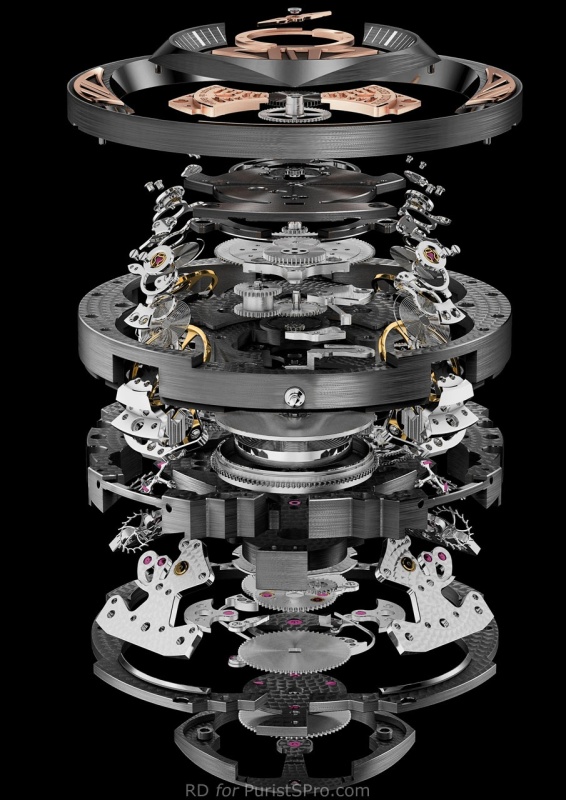 By: Ornatus-Mundi : January 19th, 2013-04:02
Manufacture Roger Dubuis today lifted the veil on a truly remarkable new watch called the Roger Dubuis Excalibur Quatuor : In short, the watch concentrates on the key tasks of a watch, that is to keep time as precise and as consistent as possible. To this...
login to reply

An exploit of an self-sufficient, vertically integrated manufacture...

By: Ornatus-Mundi : January 19th, 2013-04:53
The impressive movement, featuring several innovations which have not been realised so far, was only possible because of the considerable technical capabilities of the manufacture. Today, Roger Dubuis not only manufactures movement plates, or pinions, whe...
login to reply

By: Ornatus-Mundi : January 19th, 2013-09:44
... work in pairs to compensate immediately for the rate variations caused by the changes in position. What the tourbillon achieves over the course of a minute, the Excalibur Quatuor achieves instantly. They leave their traces on the back as well: I shall...
login to reply

By: jmpTT : January 21st, 2013-12:14
Finally, a complication as outlandish and impressive as the watch's case! Sure, the concept screams "overkill", but the path taken (four escapements with five(!) differentials) is quite a bit more interesting than the norm - multiple tourbillons. The watc...
login to reply

By: aaronm : January 25th, 2013-11:47
Noticing that Greubey-Fosey have a double-inclined balance this year, I wonder if there was some joint research between the 2. A ps to ei8htohms, theirs is freesprung
login to reply

By: Ornatus-Mundi : January 19th, 2013-09:57
This is essential to fulfill the watch's overall objective, i.e. to allow gravity the least possible influence on timekeeping. As a result, at any given time there are two escapements on which gravity has exactly opposite influence. Thus, the watch achiev...
login to reply

By: Ornatus-Mundi : January 19th, 2013-11:12
The equalising properties of the four escapements need dedicated mechanisms to come into effect. In this case, differentials ! Roger Dubuis had already made headlines in 2005 by introducing a double flying tourbillon with a differential . This extraordina...
login to reply

By: Dr No : January 29th, 2013-13:17
. . . my decidedly nontechnical brain around the claimed resonant frequency, Magnus. The four escapements would have to be connected in series to effect the claimed 16 Hz resonance. This seems unlikely to my admittedly limited understanding. A parallel co...
login to reply

There is NO resonance!!!

By: Ornatus-Mundi : January 29th, 2013-23:58
as this would as I understand defy the intended effect (and also require that the resonating escapements would be (1) linked appropriately to allow resonance and (2) beat simultaneously which would yield a summary frequency of 4Hz in this case). Thus, the...
login to reply

By: Ornatus-Mundi : January 19th, 2013-23:55
When I saw the watch first I immediately thought WOW- this one really lives! As the four escapements beat asynchronously the sound is a very special one, unusual for a watch where one is used to the regular tick-tack. This one definitely has character (tu...
login to reply

By: Ornatus-Mundi : January 20th, 2013-00:19
For what it is, the design of the Quatuor is actually quite restrained. As the escapement require some vertical breathing space there was little choice than to open the dial (if you want to keep the watch reasonably 'thin'): Bold applications at 12, 3, 6,...
login to reply

By: Fricks : January 20th, 2013-16:20
And a really bold watch! Work of art, even if horlogically speaking, the use of those 4 escapments can be debatable. Still a pleasure to look at. Thanks for the great report!
login to reply

Fabulous! the watch and the series of posts

By: cazalea : January 20th, 2013-18:35
i notice a very classy arrangement of lugs and strap while marveling at the color - a steampunk-like coppery gold. I love it! Cazalea
login to reply

Thanks much for the sharing. But

My faith has been restored!

By: marketsurfer : January 21st, 2013-05:49
Wow, just wow! What an amazing piece--- my faith in RD has just been restored. The silicon model is incredible looking---thanks for the review-- I have just seen my new grail watch---hopefully, one day, RD makes more than 3 examples of the silicon version...
login to reply

By: Ophiuchus : January 21st, 2013-15:32
I would hate to be the watchmaker that services that watch, however. It looks like an adjuster's worst nightmare! Every hairspring would have to be perfectly flat and true. Literally 4 watches in one- all requiring a perfect service. Yikes. In principle, ...
login to reply

I am trying to understand how it works, and have to say that I will wait for your

By: amanico : January 25th, 2013-02:13
In Depth review, for that. So, four balance wheels working in pair are better than a Tourbillon, even a Gyro one ala GF, GP or JLC? Are their some measures to demonstrate it? I am intrigued by this beast, which is one of the few which captivated my attent...
login to reply