If the reference 5951 launched last year was the first in house with its split seconds function it was also a much more exclusive watch, not that you'll see a 5270G at every corner, but at least some will be able to seriously think about it. Who knows? Maybe I'll do, maybe you'll do? 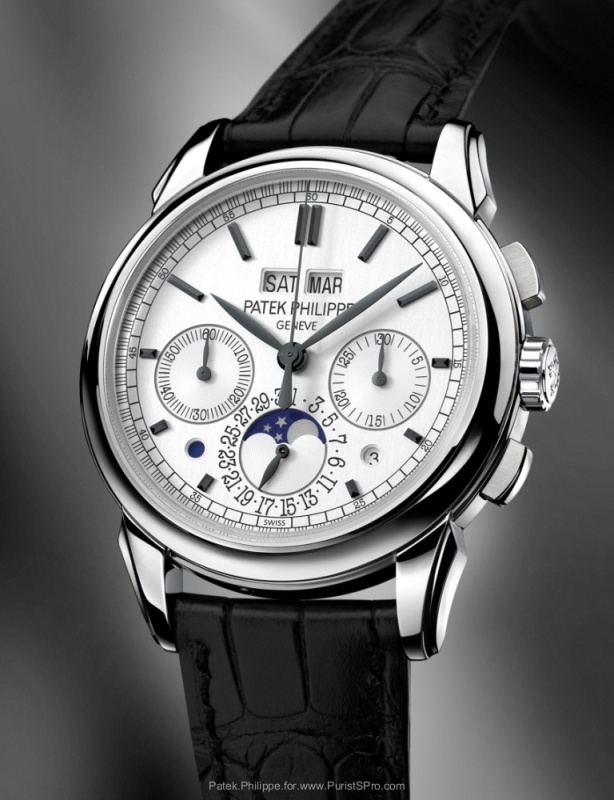 So the first impression made by the Patek Philippe 5270G is of a very classical appearance, of some understatement. Those used to Patek Philippe's history of models may see that as totally natural. Following the 5970 the 5270 appears as a shy evolution at first glance. Then you have to let time pass by and help you appreciate.

I spent nearly three weeks with the picture above as my screen saver and I've now totally changed my initial impression for a growing interest and an urge to test it on the wrist as soon as possible. I'll have to wait a few weeks more so I must calm down, but yes this watch could become my new dreamed target. 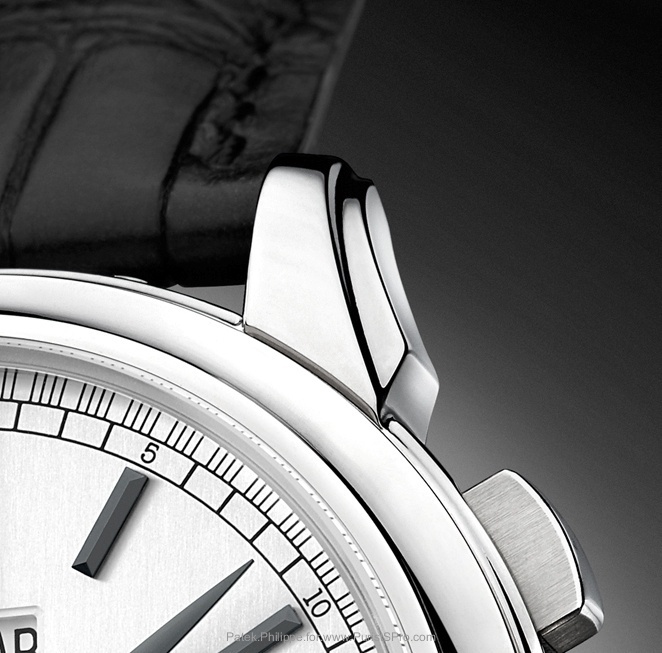 I had been much appealed by the case style of the 5970. The flared lugs of the 5970 are somewhat unique in the modern production (or at least I don't see comparable ones) and give a strong presence to the watch. The same kind of lugs are back on the 5270G. Simple round cases and sculpted lugs have often shown great ever lasting designs. This new watch is indeed made to cross the decades fresh as of today.

Some will focus more on the concave bezel. That's another good design aspect that already proved right on several Patek Philippe models like the 5205 last year for instance.

We will have to see if the 41mm diameter of the case gives the on the wrist impression of perfection of the 5970. I guess that the larger size and the flatter calibre will make the new watch appear thinner.

The mainly rectangular but quite smoothed pushers are another aspect that appeals me a lot. They seem more rounded than on the 5170, but slightly less than on the 5970. We'll have to check that with the piece in hands. 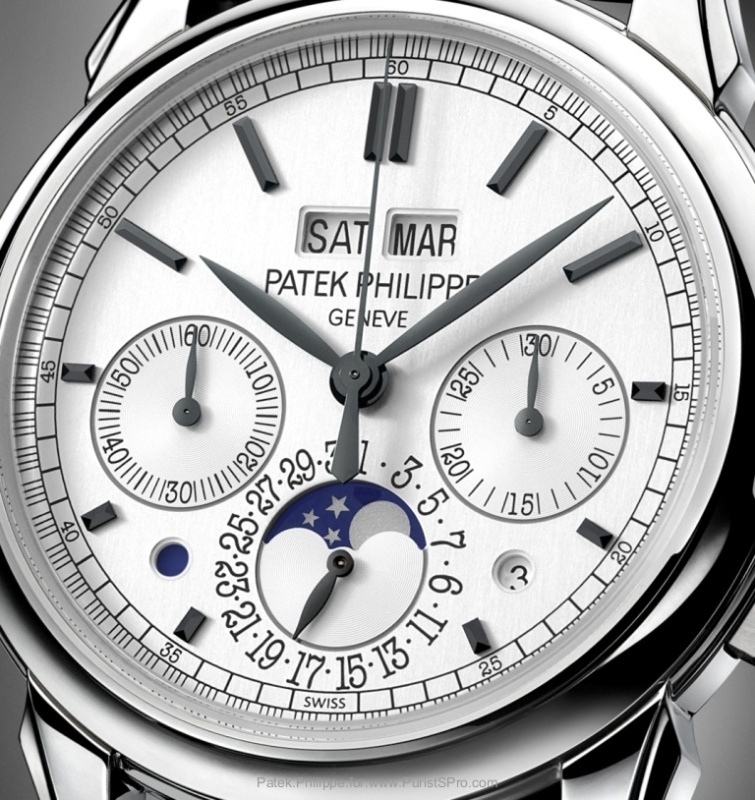 The main aspect I would like to notice and emphasize on the top size is the cleanliness of the dial. A perpetual calendar is always a way to make a busy dial. The day and month indication in apertures is a very good way to make them more readable, but the date and even more the leap year and night and day indicators generally end up misting up the dial.

The 5270G is a success on that side in my opinion. The counters at three and six have been freed from indications rarely used and let alone and perfectly readable. That also enlightens the dial a lot.

Furthermore the absence of a dedicated scale like a tachymeter or pulsometer offers a full outside and simple scale that was missing on the 5970. Nobody can now say that the chronograph is not usable! That gives a harmony, a serenity to the dial that is quite relaxing.

On the silvery opaline dial side the respective size of indications seems perfectly proportioned to me. The black oxidized gold applied markers and hands allow a perfect and immediate visibility of the time.

The chronograph and short times are to be read on a horizontal scale, while the indications of the longest time, i.e. the perpetual calendar, are to be read vertically.

In fact the watch looks simpler than it is. Understatement I wrote. I like that. We see so many empty watches with dials cluttered and full of hidden emptiness. 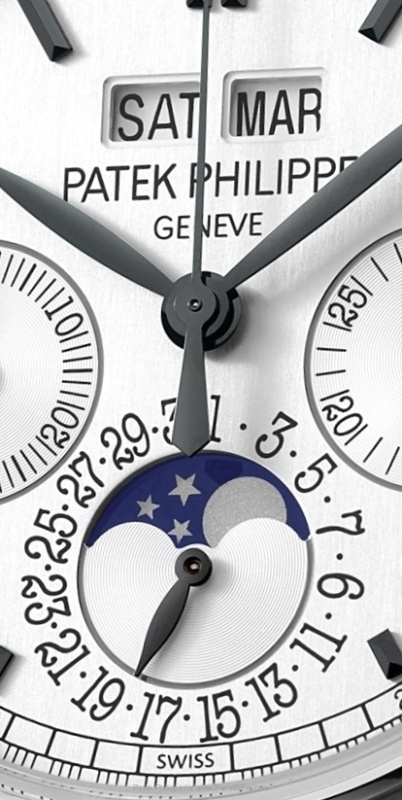 The nobility of the watch comes finally from the discreet leap year indicator at 4h30. The night and day indicator at 7h30 will avoid any mistake when the watch needs to be set. 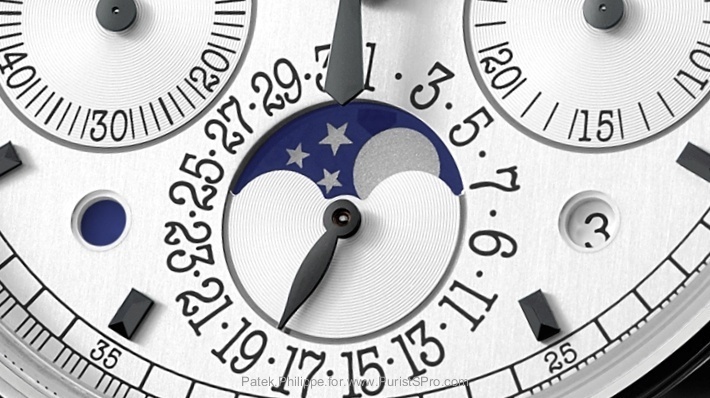 This calibre is just  technically superb and superbly technical.

I would just urge you to read my post linked above to rediscover the technical features brought by this new generation. 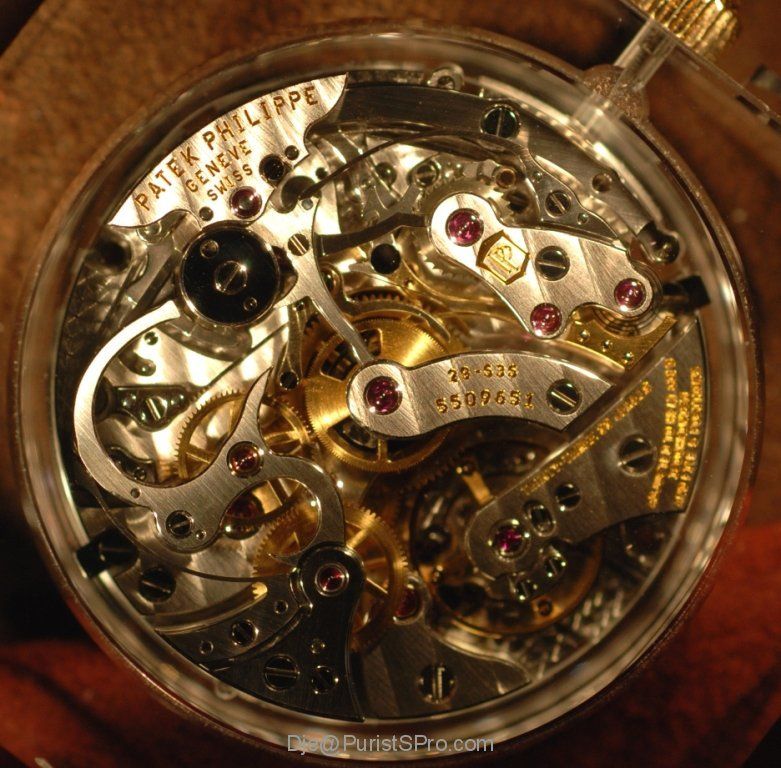 All in all I would say that I see the new Patek Philippe 5270G as a very coherent offer for the first use of the new calibre with a perpetual calendar. Some will certainly regret to see a child of the 5970 but we have time later for a new case design with the same calibre!

We will certainly talk and exchange a lot about this watch in the next weeks and months. It's time to begin. 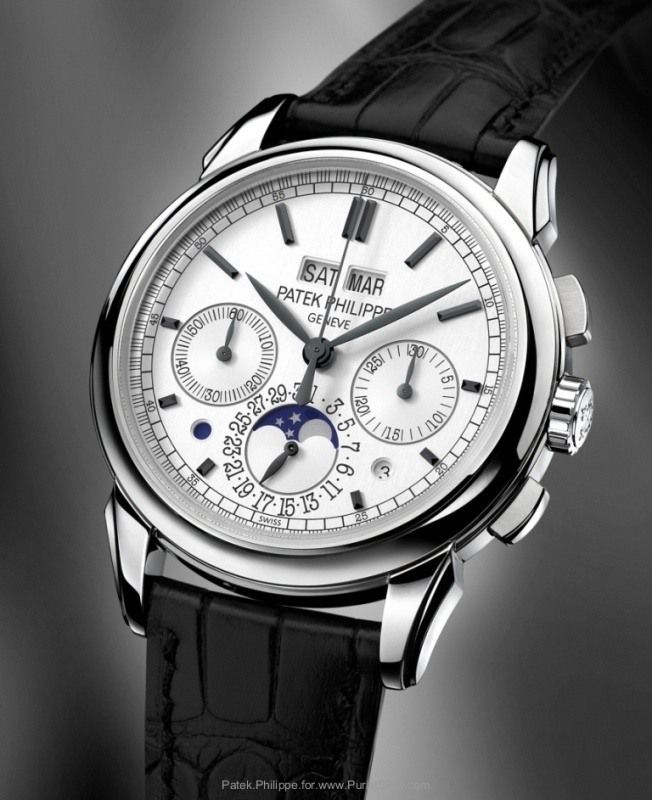 The 5270 is offered only in white gold for the time being. It is delivered with a plain back and an interchangeable see-trough back.

The watch is water resistant at 30 meters. Our own perpetual calendared swimmers will dare to use it!

What are your thoughts?

By: amanico : March 23rd, 2011-00:30
What I like a lot: The superb lugs, the concave bezel, and the fact that we have the possibility to choose between the plain and see through case back. What I dislike: The subdials, which are " de centered ", and the two port holes at the right and left p...
login to reply

Love it at the first sight

By: patrickh : March 23rd, 2011-00:38
Thanks Jérôme for these very first comments and photos. Elegant, refinement, QP and chronograph, in-house Patek calibre=the MUST have for sure. Hope I could have one day the pleasure to wear this 5270 on my wrist, even if it is for a test ;-)))) Have a gr...
login to reply

By: Miranda : March 23rd, 2011-01:14
The heir to the crown has a lot to live up to, its forbears have become icons in the horological world and are the stuff of dreams for so many. Early signs are good, and hopefully this weekend I will be able to handle it and give a real life perspective. ...
login to reply

By: Vinontre : March 23rd, 2011-01:17
Finally we can talk about it!=) Thanks Jerome for the very well written report of the most anticipated watch of the year for me. The key points for me: 1. Love the muscular yet elegant sculpted lugs 2. Much improved legibility due to the lack of tachymete...
login to reply

Thank You Jerome for report

By: dreamer8 : March 23rd, 2011-01:23
IMHO, my initial impression is it looks "bottom heavy" on the dial with the subdials placement on the dial.I kept comparing it to the 5970 dial which looks more coherent.
login to reply

By: constantine : March 23rd, 2011-01:25
the am/pm and leap year indicators are a bit "tough" on my eyes so to speak. i guess because it's new. great piece. thanks for the report!
login to reply

I have a good feeling...

By: fernando : March 23rd, 2011-01:33
about this one - a modern interpretation of a classic, especially with the black hands & indices. A little querkiness here and there,such as the regular & short indices but taken as a whole it's quite pleasing to the eye and the dial doesn't look ...
login to reply

By: Mark in Paris : March 23rd, 2011-02:48
I'm a big admirer of what PP is and represents but I always had a mixed filling about there estheticism. In the mean time I knew things would evolve. I must say I really love this 5270, and particullarly the choice of this concaved basel, the harmony of t...
login to reply

is the subdial at nine a counter or a small seconds?

It is the permanent second hand! nt

By: small-luxury-world : March 23rd, 2011-03:26
Lots of pro´s so far, but as always it has to be seen in the metal & on the wrist. First con, the writing is quite big - compared to the predecessors. I know it is nothing new, lately. Anyway, the lugs and the crown look very nice ... Dje, thanks a lot fo...
login to reply

Thanks for your insight into the 5270

By: AnthonyTsai : March 23rd, 2011-05:04
The only thing I don't like about the dial is the numbering of the date. Seems to be a tad too large IMO. Otherwise, looks like a beautiful watch. Cheers, Anthony
login to reply

I would have to agree

For those of you who read my thread.

By: missoss : March 23rd, 2011-05:33
For those of you who read my thread titled "What are my options?", this is the watch I wish I could buy while visiting the Patek boutique in Geneva. What a watch! I hope I will one day be the proud owner of this fine piece of art. Thanks for the post Dje....
login to reply

Jerome, what's the diameter of the case/bezel?

Hmmm...Dje, does the day/night indicator operate...

By: heartbreaker : March 23rd, 2011-14:00
First of all, let me pay Jerome my compliments for his brilliant report. Even if I’m far from having the right skills to write something after such a comprehensive article, I’d like to express my personal point of view. Let’s start from ...
login to reply

By: jimjenkins : March 24th, 2011-00:27
Of course, we have to see it in the metal to develop an accurate impression. My first impression of the pictures are: 1. Very legible black hands and stick markers on white dial, which is practical, but that stands out too much, and takes away from the un...
login to reply

Thanks, Jerome, for the interesting report.

By: masterspiece : March 24th, 2011-00:51
I like it. I like the "cluster" of the sub dials being on the bottom. Being a designer, it seems natural to have it more toward the bottom than the top as heavier things in nature are drawn to the bottom through gravity. With the greater white space at th...
login to reply

I have no idea! nt

I fully concur... I was waiting for the successor...

Your thoughts mirror mine

Wow - a-. winner Thanks Jerome for this wonderful report

By: watch-guy.com : March 24th, 2011-15:50
This is the one to get. If I was in the market for one of these- perpetual chronos, why not get the one with the in house PP movement rather than te Lemania. Surely an in house movement from the company that is famous for these models trumps any "imported...
login to reply

Thank you all for your comments

By: Dje : March 26th, 2011-11:21
Hi, Thank you all for your comments. I was not travelling to Basel these days so I've not seen the watch. I should see it next month or in may and so I will come back with my own pics. Till that I will wait to give more of personal opinion. I can just say...
login to reply

By: GOGO disqualified : March 27th, 2011-03:33
As long as I concern, recent Patek Philippe is losing dignity that have owned for a long time. Traditionally, Patek Philippe perpetual series has moderate logo and big moonphase on the position of 6 o’clock on the dial. Such as 2499. basel.watchprosite.co...
login to reply

Can't agree more. Congratulations to all proud owners of 5970

By: Gorowitz : March 27th, 2011-04:36
Congratulations to all proud owners of 5970, you have such a timepiece which embodies the soul of the legendary Patek Philippe Perpetual Chrono, a true successor to 1518 and 2499. We don't need history to decide on its legacy. 5270 has proved it.
login to reply