This photo shows me wearing my newly-purchased Seiko Sportura Kinetic Chronograph. It cost an astonishing $2000+ in 2001. I saw a Harrod's ad for this watch on the back of Classic & Sports Car magazine, lusted after it - but then resisted for several months. I finally gave in and bought the watch. Here's a photo from January 2002. 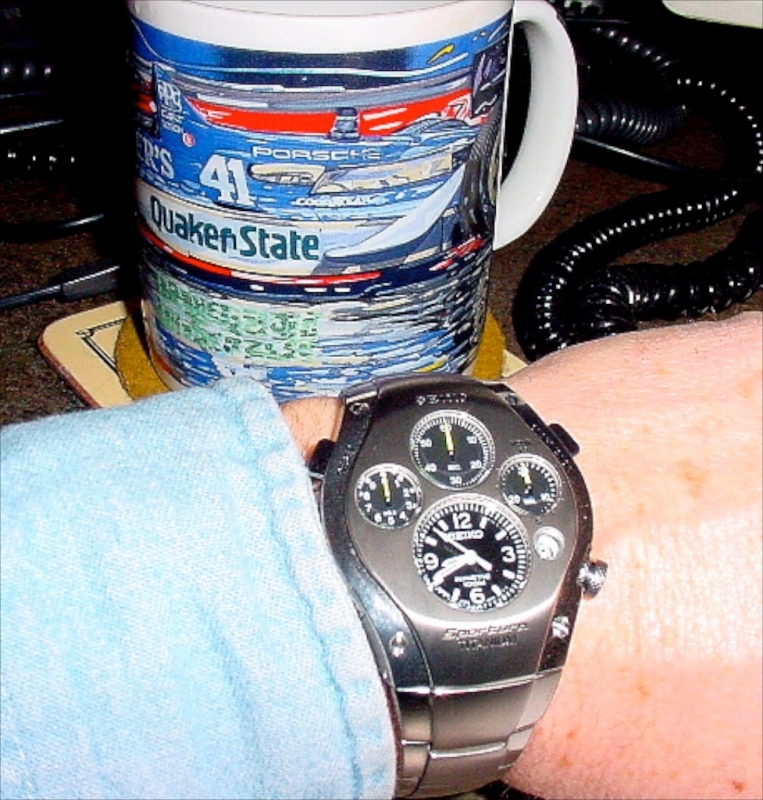 It was not the only kinetic movement of the time period (remember the Ventura SPARC? I had one of those too) but it is arguably the best and longest-lasting movement of its kind. 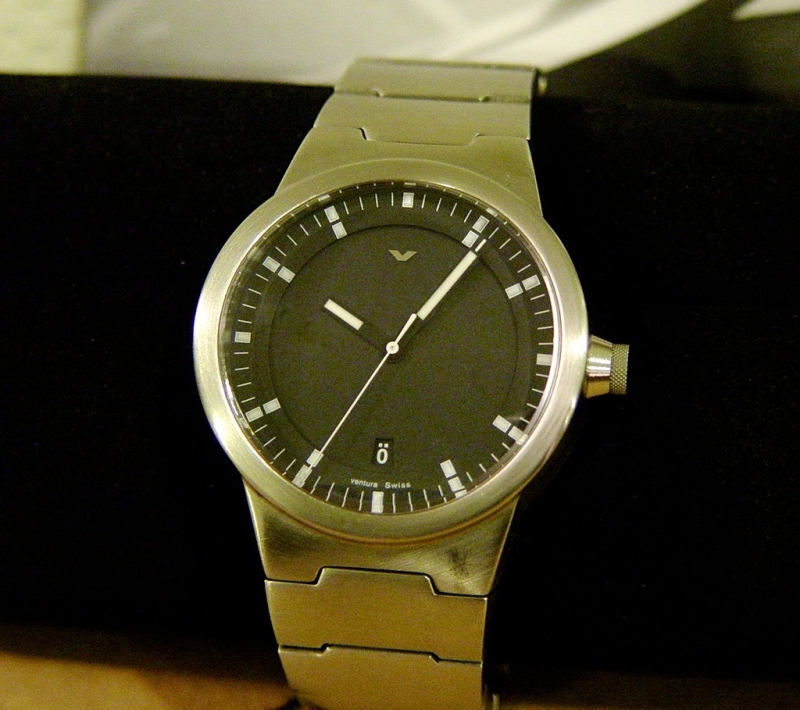 Although Seiko Time Corp. builds this watch movement by hand in small numbers, it has been issued in a bewildering number of variants over the past decade. I currently have an early model and a later one, so we'll profile both of them in this post. Note that the movement architecture has remained consistent (5 small displays) even though case materials, crystals, case design, bracelets and so on have evolved. 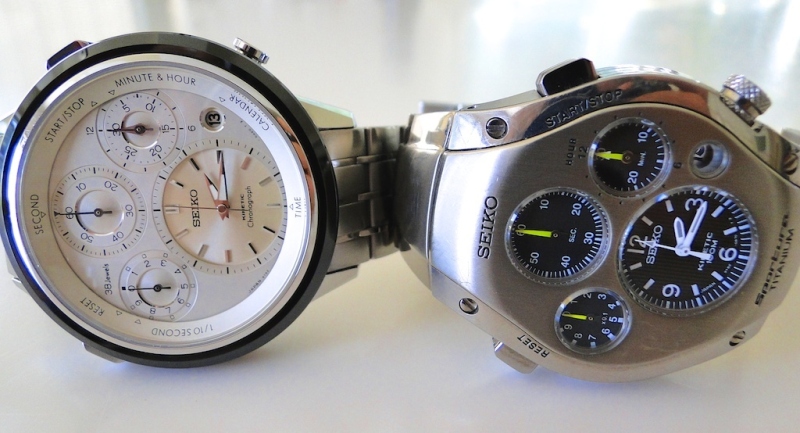 Both watches have a rear display window that allows you to inspect the center of the rotor and some of the decorated, 38-jewel movement. The earlier model has a screw-down crown. Both are rated for 10 BAR water resistance. 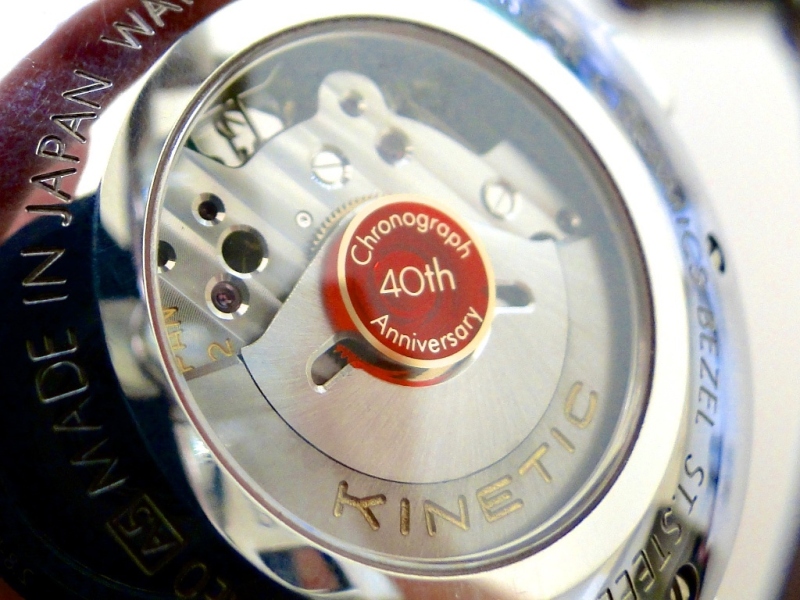 Please pardon the appearance of the 12-year-old titanium case. I believe it's ready to go back in for a spa treatment. 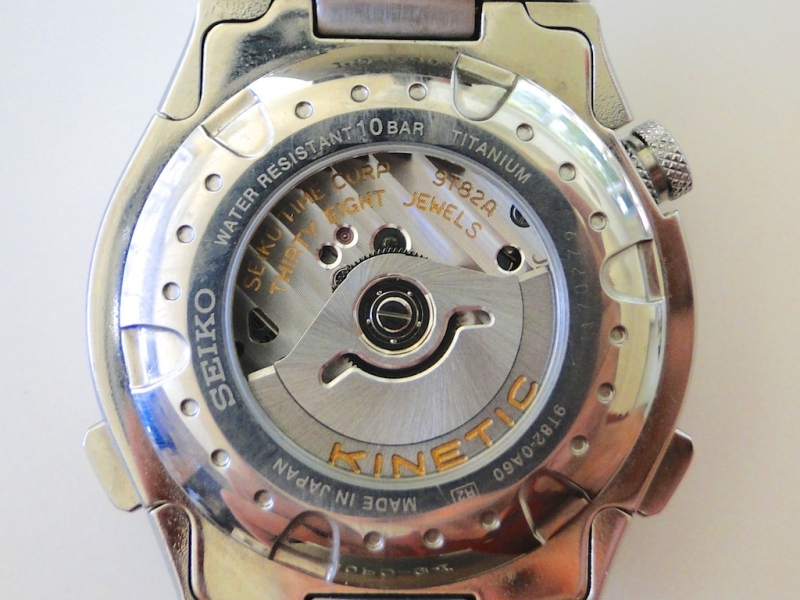 Somewhere deep in the bowels of the movement is the energy cell. Mine works just fine, although there were some which failed early in their service lifetime. Because the movement must be disassembled to replace the cell, Seiko is virtually the only place to have the service done. It's about $1k and this price (like an engine service on an older Ferrari) may sometimes exceed the owner's tolerance,, budget and/or the watch's market value. 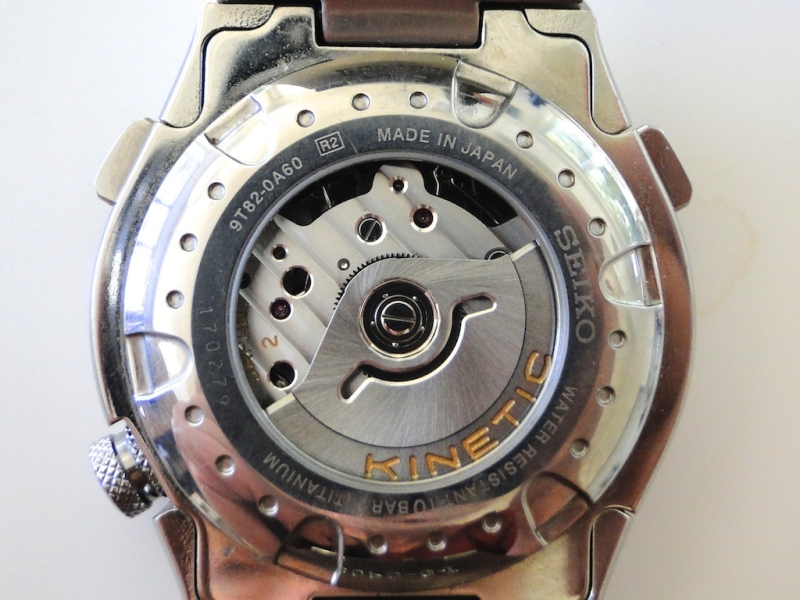 As you can see, the design of the bracelets is quite different. 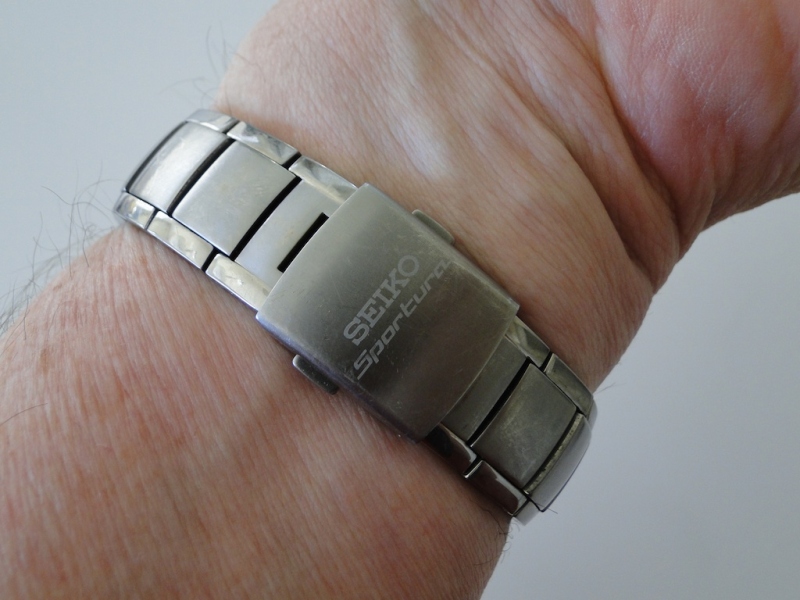 Both clasps lock securely and to open them you press on dual release buttons. 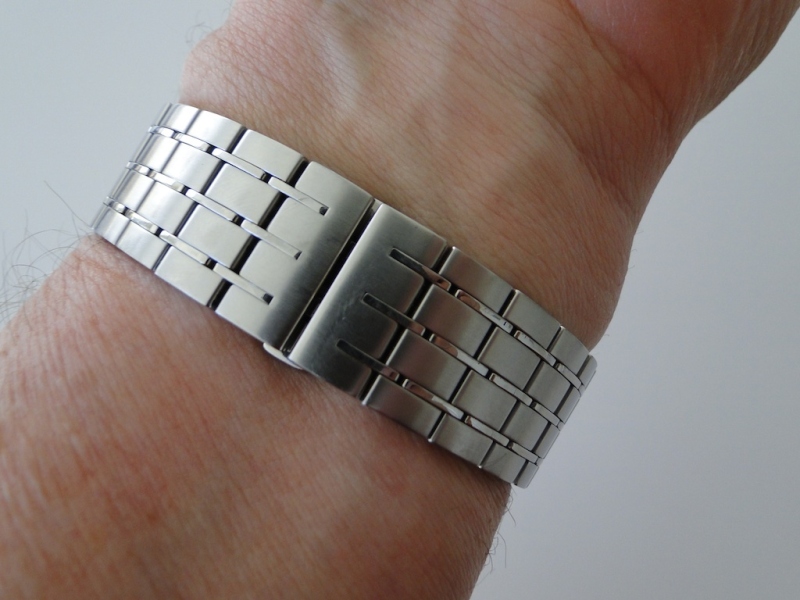 The dials are readable if you have good eyes and good light. There is a token amount of luminous material but it's not very functional. I need to concentrate to get the time on the Anniversary model, as the champagne/silver dial 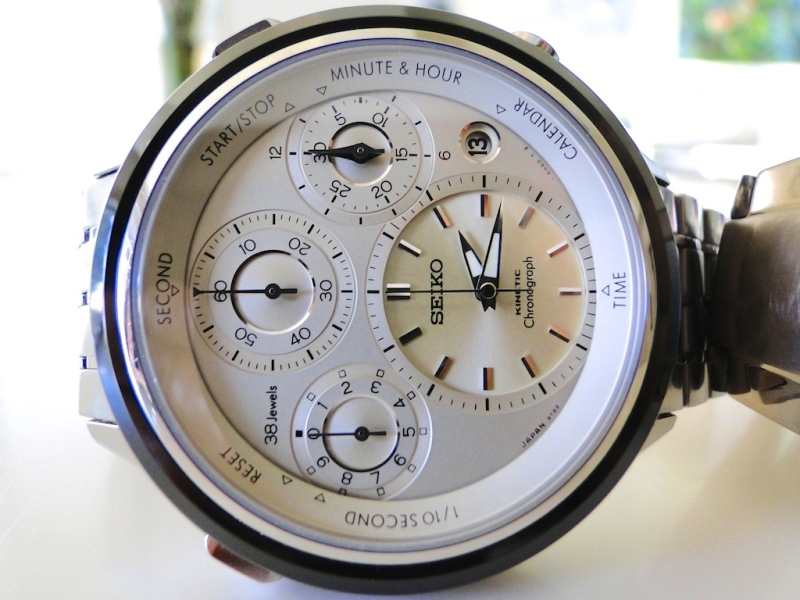 The SLQ007 has much better contrast.
This watch was offered in various combinations of yellow hands, orange hands or white hands; on white, black, red, grey plain, striped or patterned dials; - in steel, titanium, or black PVD cases. The bezel on my anniversary watch is ceramic. 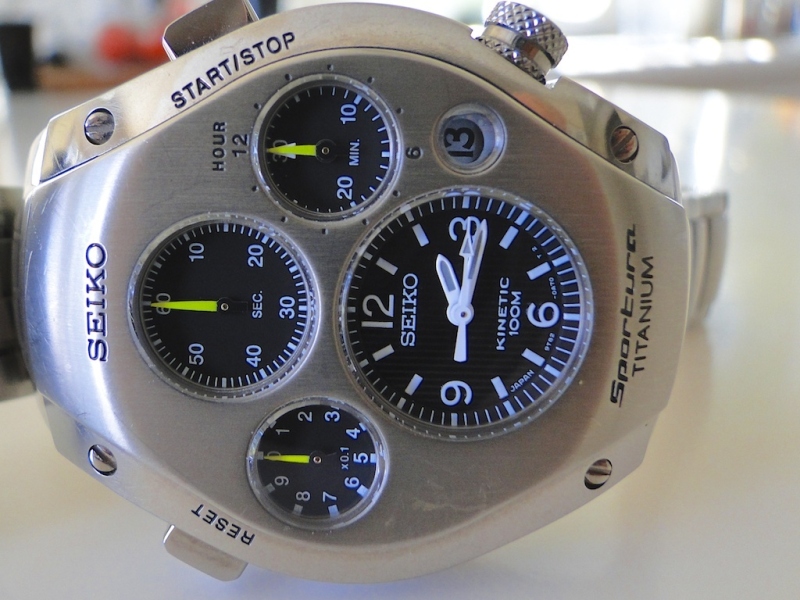 In most cases the push buttons for the chrono were rectangular. Note that all the dials and functions are labeled on the dial or the front of the case. This isn't really necessary - but at least it's relatively inconspicuous.
One drawback of the kinetic system is if you forget and leave the 1/10th second chrono running, the watch will use up its reserve power much more quickly. To manage this, the chrono stops after a period of time, defined in the owner's booklet as 12 hours, 6 minutes and 12.2 seconds.  In case you weren't keeping track in your head, my calculator says that is 435722 tenths (of a second). There must be some significance to that number ...
Here's a short video to show you the operation of the Chrono. You can hear the solid click when I activate the watch. It's totally unlike a typical quartz watch and requires a hefty push. Snap - and all hands jump right back to zero.
Both watches came in a nice small wooden box, with manual, warranty and hang tags. 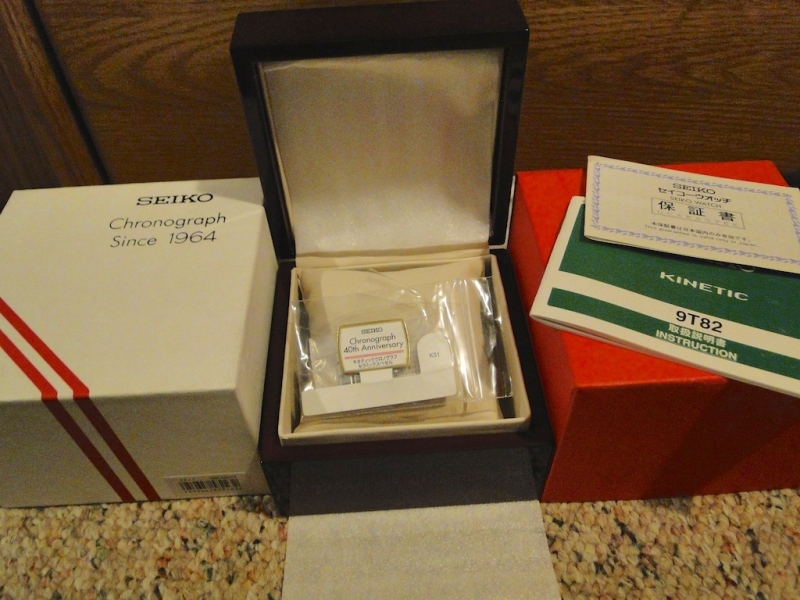 Here's an instructional page from the 9T82 parts manual, for recasing the watch. Notice the movement comes out from the back of the case in the conventional type, and from the front of the one-piece case. 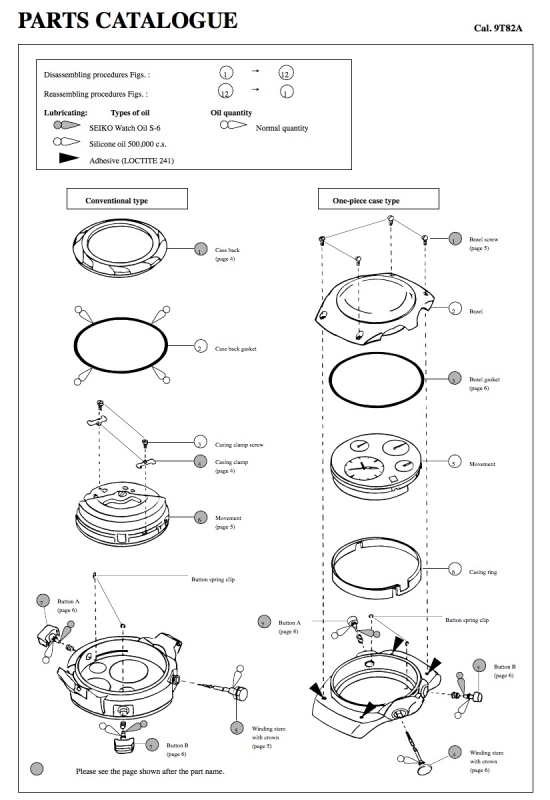 I'll conclude with some wrist shots and a comprehension test for you. The anniversary watch 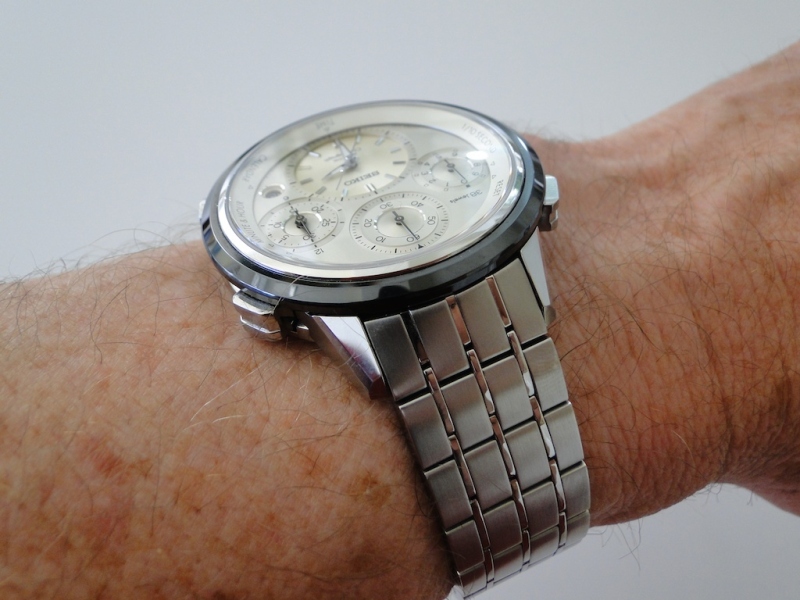 and finally the titanium one. 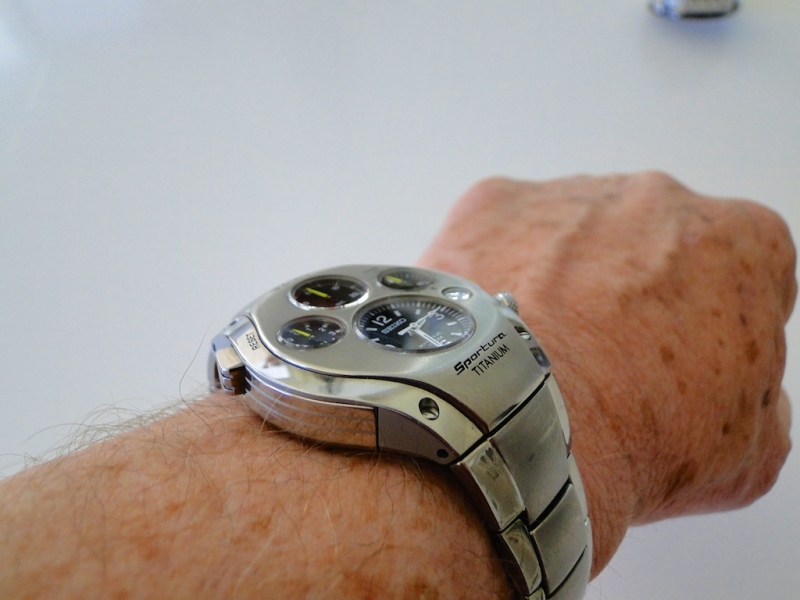 Please let me know what I've done incorrectly in this post ...
Cheers
Cazalea

By: cazalea : March 13th, 2014-20:17
Seiko introduced the 9T82 movement around 1998. It's a combination of a kinetic power generator, a power storage cell, a quartz movement for timekeeping, and a mechanical chronograph movement for time recording. In theory, it's a bit like the JLC (etc.) m...
login to reply

I have never tried SEIKO Kinetic before...

By: Spellbound : March 14th, 2014-17:07
Thanks for this great report. Concerned that the movement has to be disassembled to replace the energy cell and that the service cost is a whopping $1k. But a fascinating watch nevertheless. Dean
login to reply

By: Magnvs : June 7th, 2015-20:44
With all respects to the original poster, I think the repair cost is a little inaccurate. I have repaired non chronograph Seiko watches from the same time period (3M22-0D39) and it ranged from 100-200. Additionally I currently have an SLQ-007 (similar to ...
login to reply