Mar 27, 2017,13:35 PM
I already wrote it, but 2017 re ignited my love for Ulysse Nardin, which unveiled a nice and interesting collection, this year.
We'll certainly have the time to discuss each of them, but let me introduce you a watch from the 2017 collection which seduced and convinced me, the Marine Tourbillon.
The Marine collection always pleased me, from the very first days of my horological journey. But I always had a problem with these watches: The presence of a discrete but ungraceful date at 6 o' clock, at the exception of an enameled version which was produced in limited edition in 1996, to celebrate the 150th anniversary of the brand.
White Gold 250 pieces. 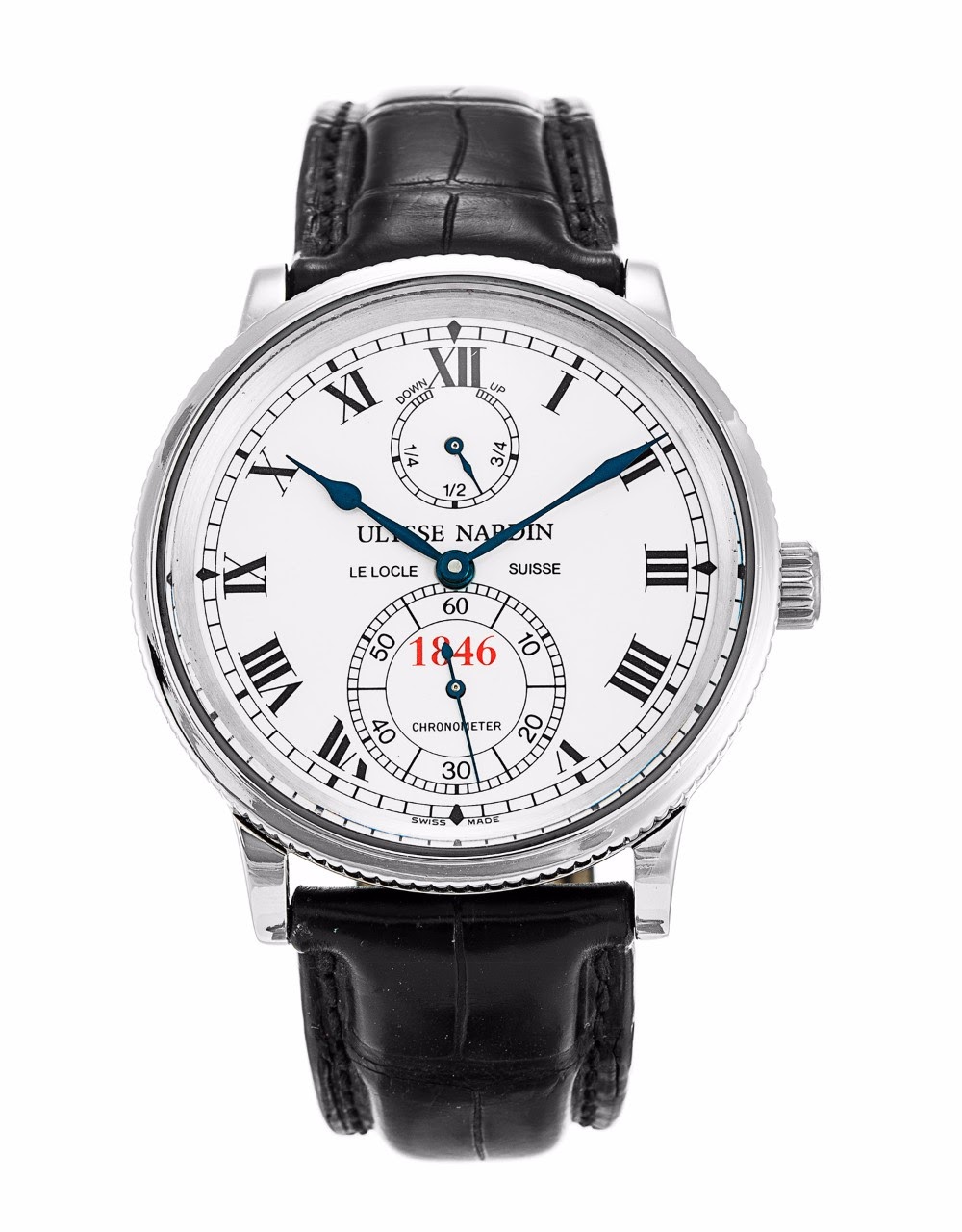 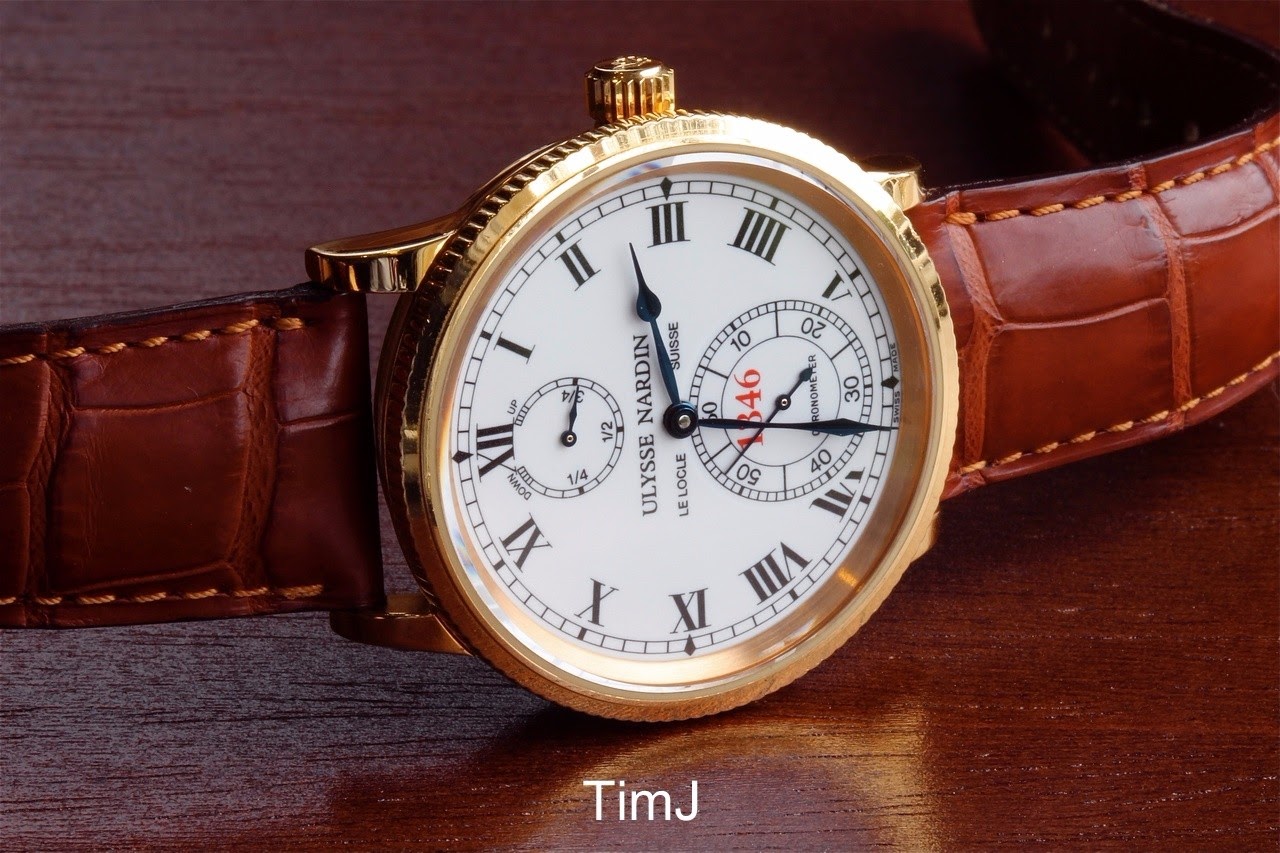 Another inconvenient for me was the movement, an ETA, which was not dign of a watch from this price category.
So, I gave up, even when Ulysse Nardin unveiled their Marine Chronometers with the Cal 118 in house movement... Till this year, and the birth of this Marine Tourbillon.
The Marine Tourbillon is a 43 mm steel case watch, with a screw in crown protected by a rubber notch, with a see through case back. It is water resistant to 100 meters.
You will immediately see the absence of lugs, which gives to the case this particular shape, and the fluted bezel. 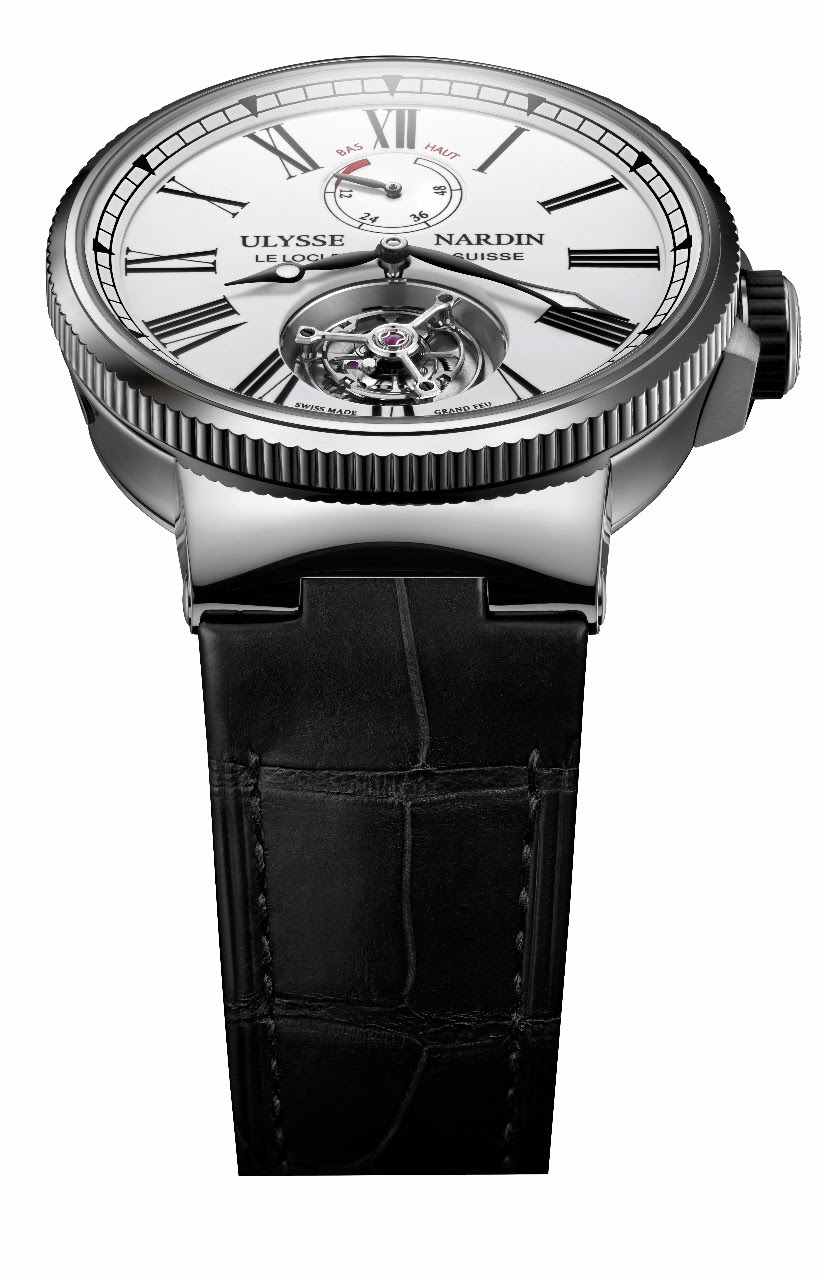 The dial is conform to the DNA of Ulysse Nardin Marine Chronometers: A power reserve at 12, huge roman numbers, these special hands, and something at 6 o' clock, which usually is a small second. 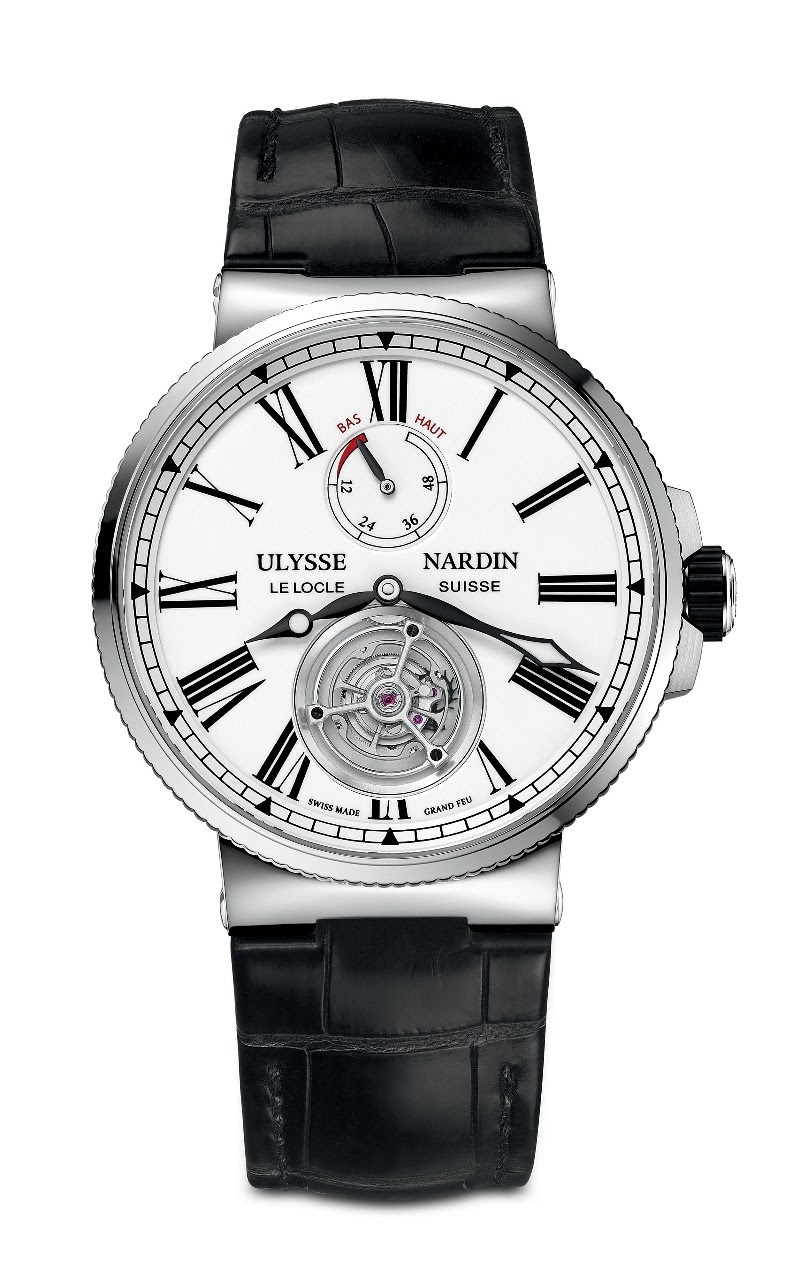 Here, the small second is out, and replaced by a flying Tourbillon.
Last but not least, the dial is made in... Enamel Grand Feu, like the 150th and the 160th Anniversary Marine Chronometers. 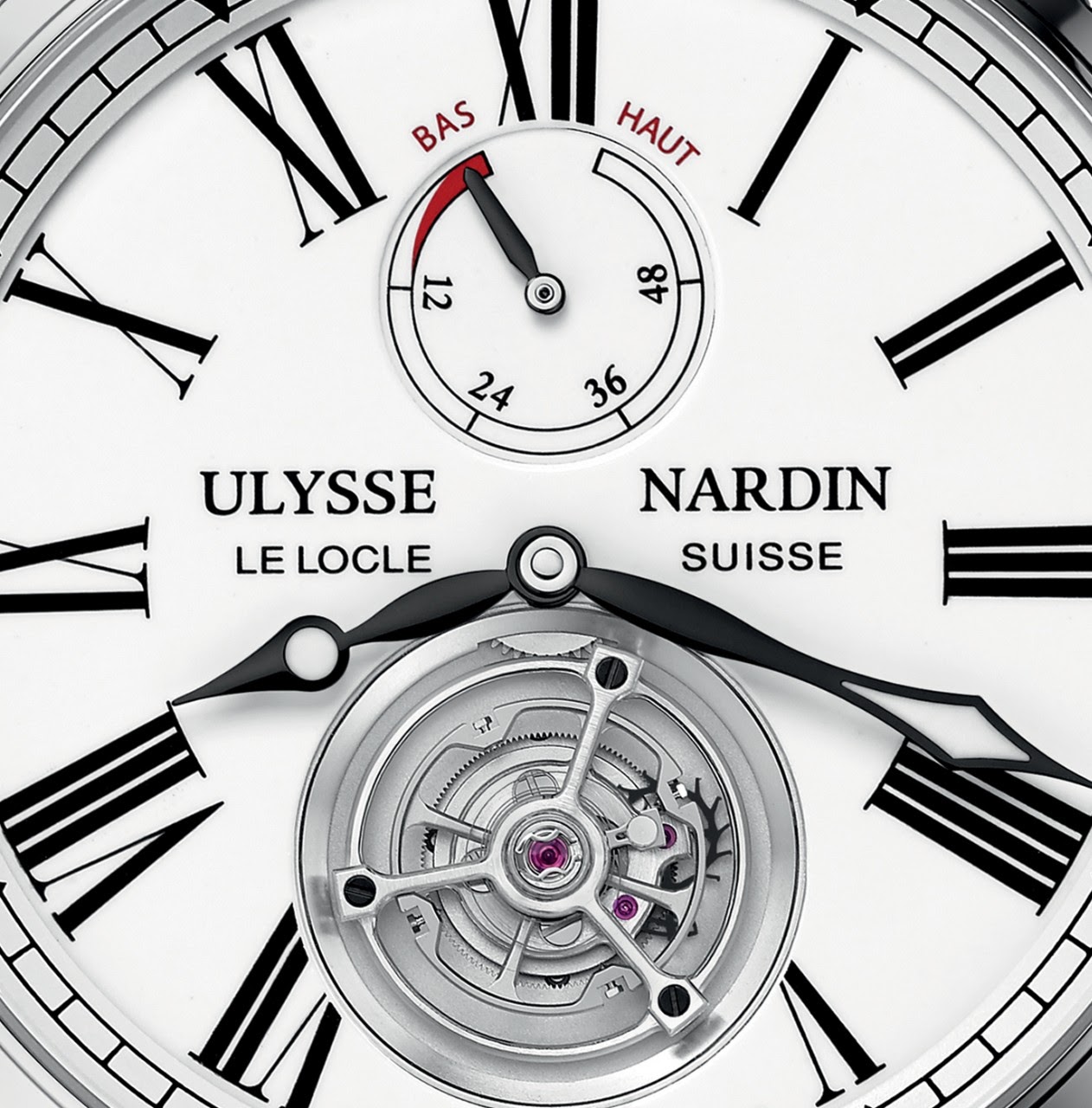 The automatic movement is the Cal 128, which is in house, like the Tourbillon. It beats at 28, 800 vibrations per hour, it has a silicium escapement and spring, and offers an autonomy of 60 hours.
The Cal 128: 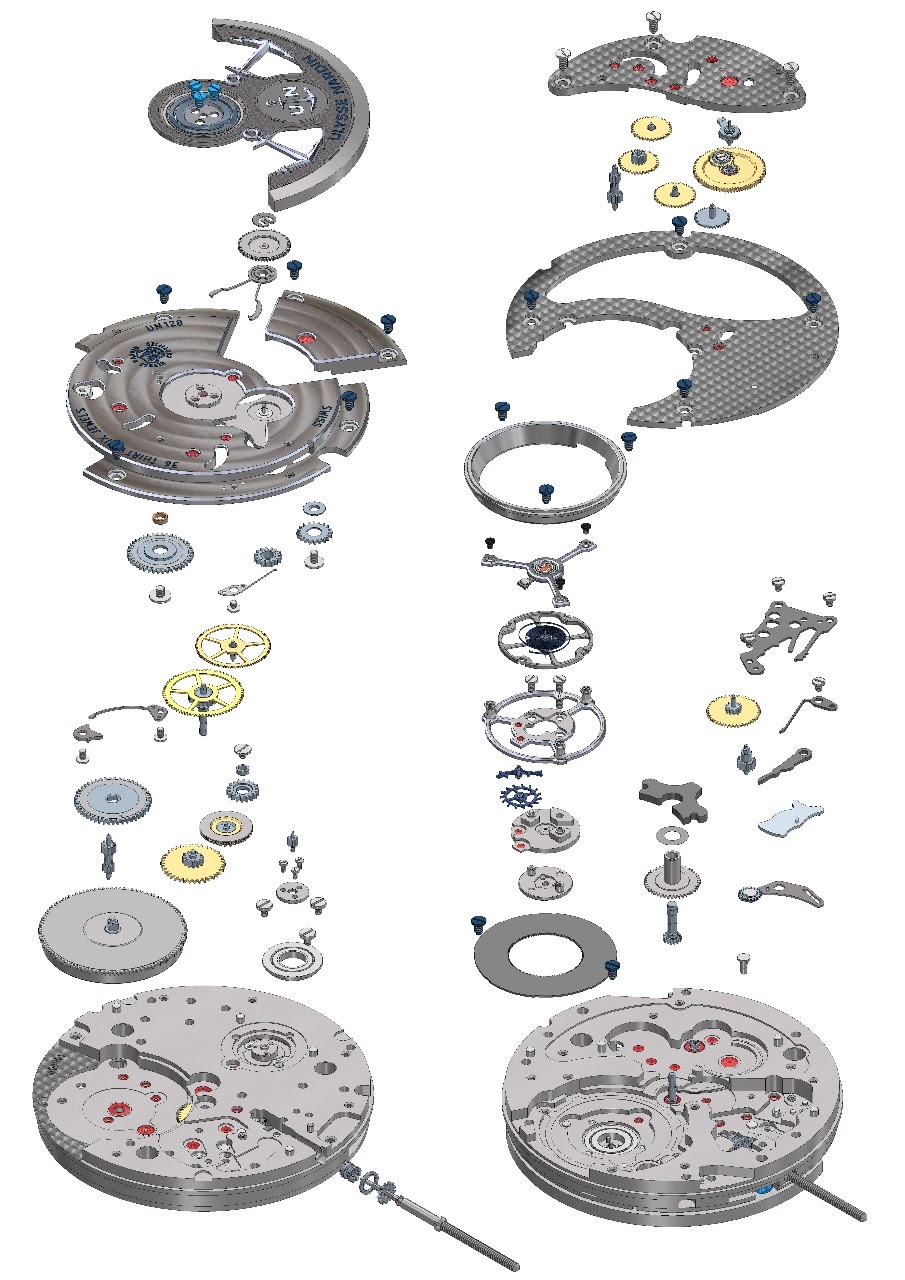 These facts being mentioned, some personal thoughts on that Marine Tourbillon, now.
There are many things which please me:
- First of all, I find this watch quite consistent with the brand's heritage: The bewitching enamel dial, the technicality- Ulysse Nardin being a pioneer in the silicium technology since the very early 2000's- and the DNA of Ulysse Nardin Chronometers.
- I am not a big fan of Tourbillons which make a hole in the dial. Even less when the dial is superb, like on this watch.
But here, I have to say that I surprised myself not to like it, but to love it.
Why? Because I find it beautifully executed, and it contributes to the balance of the whole dial. It makes echo to the power reserve indicator.
- The water resistance to 100 meters: Quite consistent for a Marine Chronometer.
- The lack of date, finally!
- The price. Usually, I don't mention prices in my articles, but here I have to: The Marine Tourbillon is priced at... 28 000 Euros.
Aggressive for the competitors, or fair for the customers? I would go for the second answer. For that price, you have a flying tourbillon, a nice flying tourbillon, which is, therefore, a Chronometer. Who else can offer that at that price?
What I don't like, or less like, now:
- The absence of lugs: I can understand that on a 43 mm watch, the absence of lugs allow a wider " wearability ', but in terms of aesthetics, I prefer having classic lugs, which were present on the 150th anniversary and its 38 mm case.
- The fluted bezel: I don' like fluted bezels. I find them outdated. I much prefer plain bezels. At least this one is plain on its top.
- A little inconsistence: A Marine Chronometer should have a small second. I understand that a tourbillon serves ( theoretically ) the purpose of accuracy, but a small second is more à propos.
- The strap: A Marine Chronometer in steel should have a more rugged strap, in my opinion. A Canvas strap, for example, or a leather strap which can be waterproof.
I wrote this review after having seen the Marine Tourbillon in the " metal " at the SIHH. I didn't have the time to take some pictures of it, but I will do that later.
What I can say is that this Marine Tourbillon ticks a lot of boxes for me: Enamel, Chronometer, and a technical Tourbillon.
The pros win over the cons, yes, I am seduced, and... Tempted.
Looking forward to reading your comments and thoughts on that one,
Best.
Nicolas

By: amanico : March 27th, 2017-13:35
I already wrote it, but 2017 re ignited my love for Ulysse Nardin, which unveiled a nice and interesting collection, this year. We'll certainly have the time to discuss each of them, but let me introduce you a watch from the 2017 collection which seduced ...
login to reply

By: kev09 : March 27th, 2017-14:29
Like you, I've always admired these UN marine chronometers. They seemed to me to look exactly like a marine chronometer should look; simple dial, easy to read, nice oversize sub seconds (surely essential on a chronometer) and that lovely red 1846.vThe new...
login to reply

Too modern because of the presence of the tourbillon? [nt]

No it's not the tourbillon

By: kev09 : March 27th, 2017-14:46
It's just the overall look - the absence of lugs, the crown protectors and the rubber on the crown. The combination of these details just jars with me. I'm always the same when a watch I've admired for a long time gets a "modern makeover" however tasteful...
login to reply

LOL about the age thing. Thanks for your input, my old friend. [nt]

By: Horologically_minded : March 27th, 2017-17:03
The 150th anniversary dial, but with the tourbillon viewable only from the back a la Patek or Laurent Ferrier. Kind of like a secret beauty "for your eyes only". Best, J
login to reply

That would work a lot for me! [nt]

I still think about this one from SIHH

By: Joepny : March 27th, 2017-17:04
so many new 2017 novelties disappear into the nether but this one has stuck with me. I too have a problem with the strap that is not sporting enough to put the 100m WR to use. A shame. But overall a great statement by UN and a challenge to the industry th...
login to reply

Thanks for your feedback, Joepny. I like the way U.N see things, these days. And this Marine Tourbillon is a good, very good example. [nt]

By: willski : March 27th, 2017-17:10
And I applaud UN for trying to rein in the ever growing pricing these days. I do feel the writing in the middle of the dial is quite large, and I'd be curious to see how it looked with smaller font (also not sure if Le Locle - Suisse is completely necessa...
login to reply

Le Locle Suisse is an historical mention, a bit like Geneve for Patek. Thanks for your comments, Willski. [nt]

I immediately liked this one upon introduction.

By: M4 : March 27th, 2017-18:19
My hesitation: the case thickness. I haven't seen the thickness measurement published but it appears a bit puck-ish. Hopefully, the pics deceive and its 14mm or less, which would land the watch on my shortlist. M4
login to reply

I will ask to my contact at U.N about the case thickness, but I was not shocked when I saw it in the real. [nt]

The feeling I had. Not too thick. [nt]

I am glad to see such a great product from UN. Always am a fan of their enameled dial and glad that the tourb is now in an "affordable" range especially for one that is built in house. Bravo to our friends at UN. [nt]

All things considered, it is a great timepiece that offers more than its price would indicate.

By: MichaelC : March 29th, 2017-09:37
A tourbillon and enamel dial from one of the finest watch manufactures in the world for such a price? Unheard of. Value aside, I love the watch. If I could change 1 thing it would be the lugs, as I prefer something more traditional. I like the bezel edge,...
login to reply

I agree on the lugs. I would have preferred something more conventional, too. [nt]