A family shot - and the story behind

Apr 20, 2019,10:48 AM
What we see here is a proud family of the House of Ulysse Nardin. Dad, Mom, and the young heir and successor to the throne. As is so often the case, the youngster has outgrown both his parents. 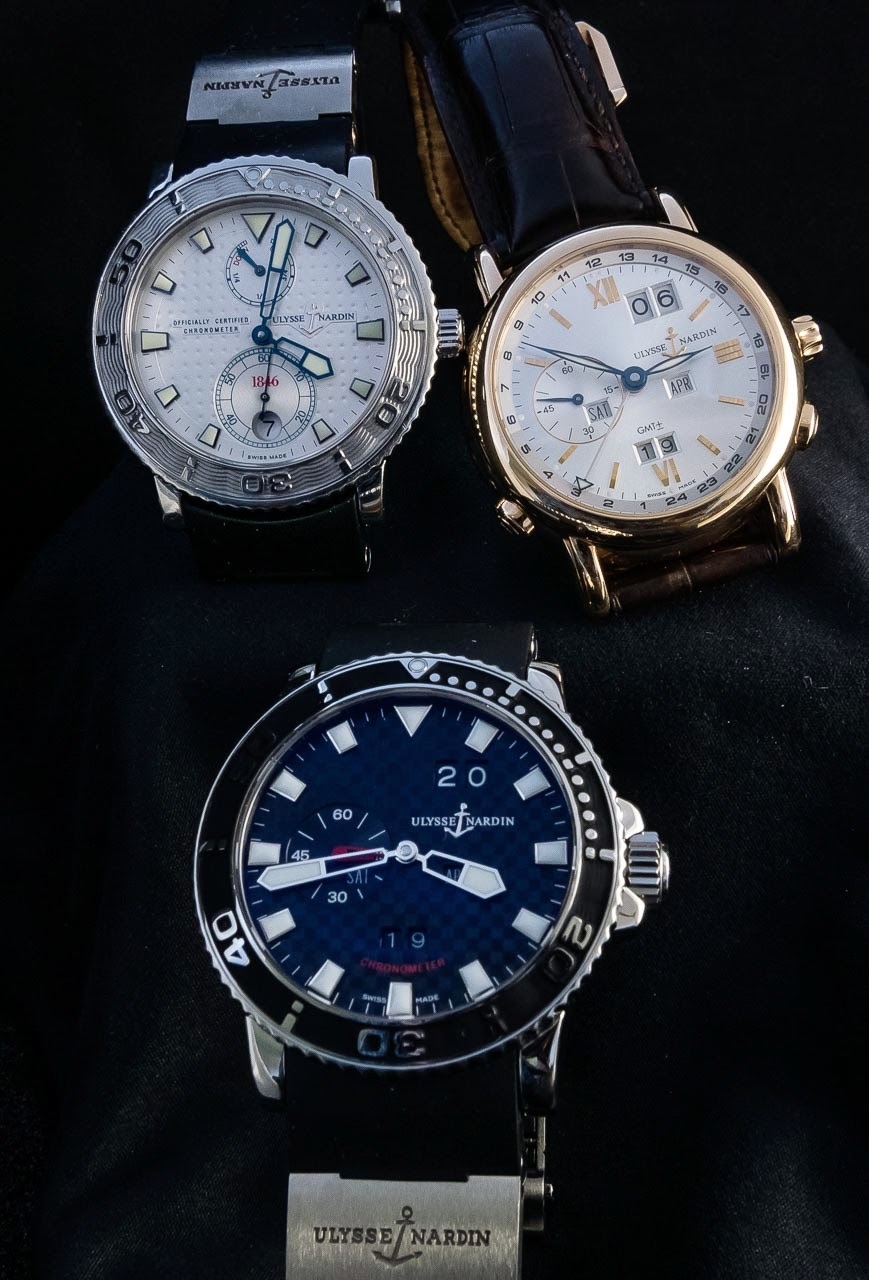 However, before this happy end was possible, some obstacles were to be overcome. Here is the story:
There once was a beautiful young lady of noble descendance. Her name was "La Perpetuelle": 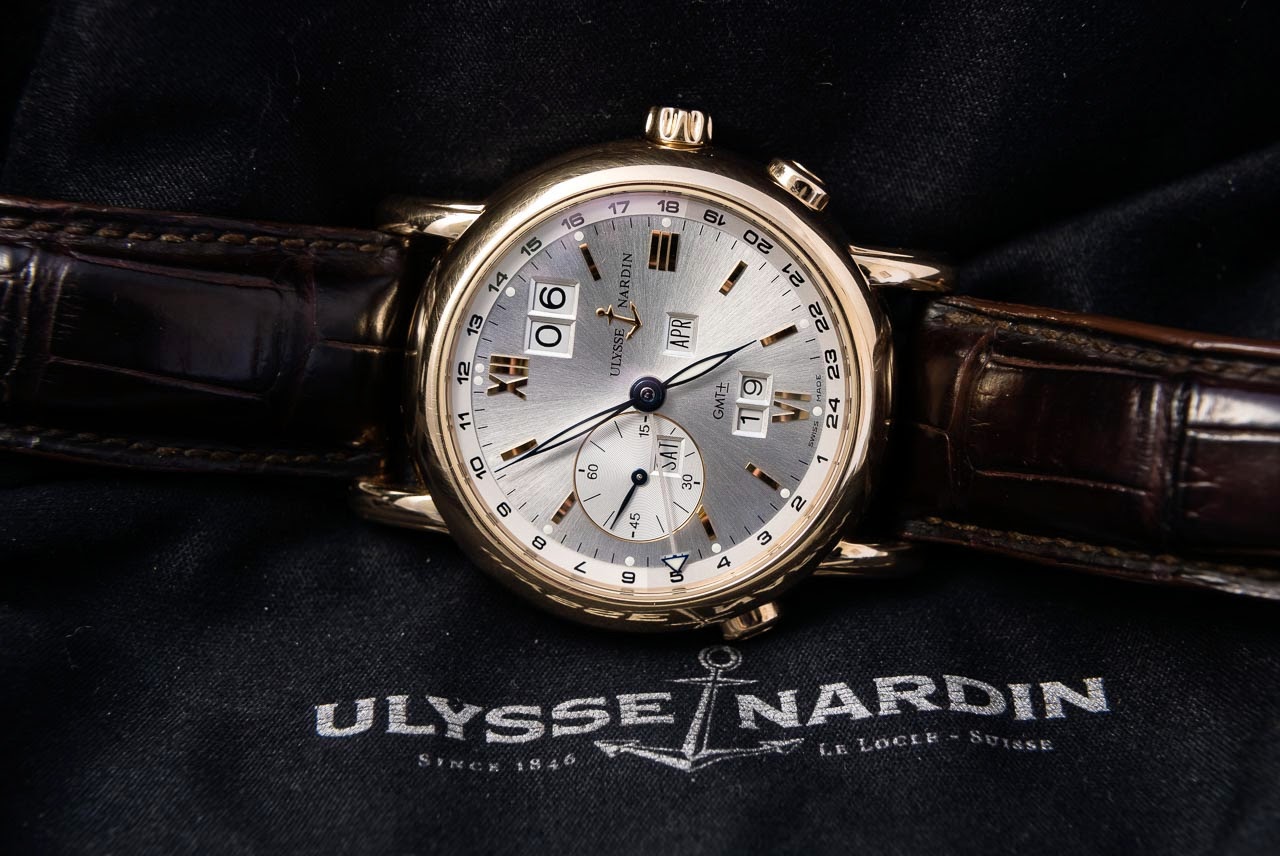 Her parents were very fond and proud of her, aspiring to find her a husband from the highest ranks of society: "You will only get one of the very best!", they said. "The Baron de Tourbillon would be a wonderful match. Maybe even the Comte de Sonnerie might have an eye on you!" So Perpetuelle grew up with prospects of a bright future.

But then, however, on a trip accompanying her parents to the seashore, she met him: 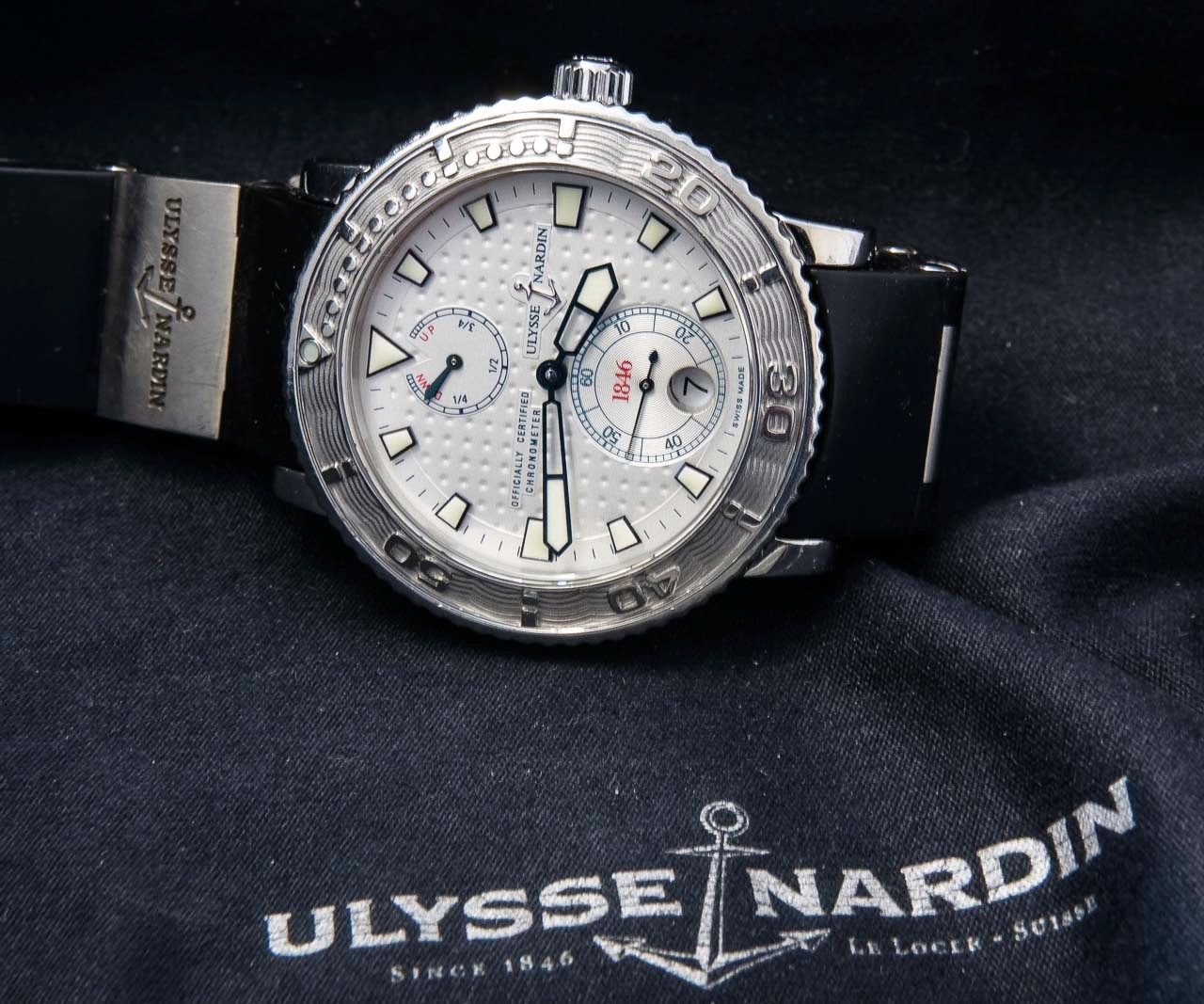 The girls in her class were all crazy about "The Diver", as he was called. He was strong, virile, with a hint of fashion. Passing by on the beach, he flashed his shining diving bezel at Perpy - and she was lost in an instant.
"Him, or noone!"
Of course, her parents were shocked, and once their shock was overcome, angry: "No way you get to marry this .... this ... shameless sports watch! He doesn't even have a manufacture movement!" Perpy shouted, cried, insisted. "You put shame on all your family!", was all she got as a reply from her parents.
In the following night, Perpetuelle ran away from its watch winder bed at home.
A year later, she returned. Together with The Diver, who pushed a baby carriage. "His name is "Acqua", Perpetuelle stated into the aghast faces of her parents.
Well, another timespan later, the kid had become an attractive young man leaving no doubt about his parents' genes: 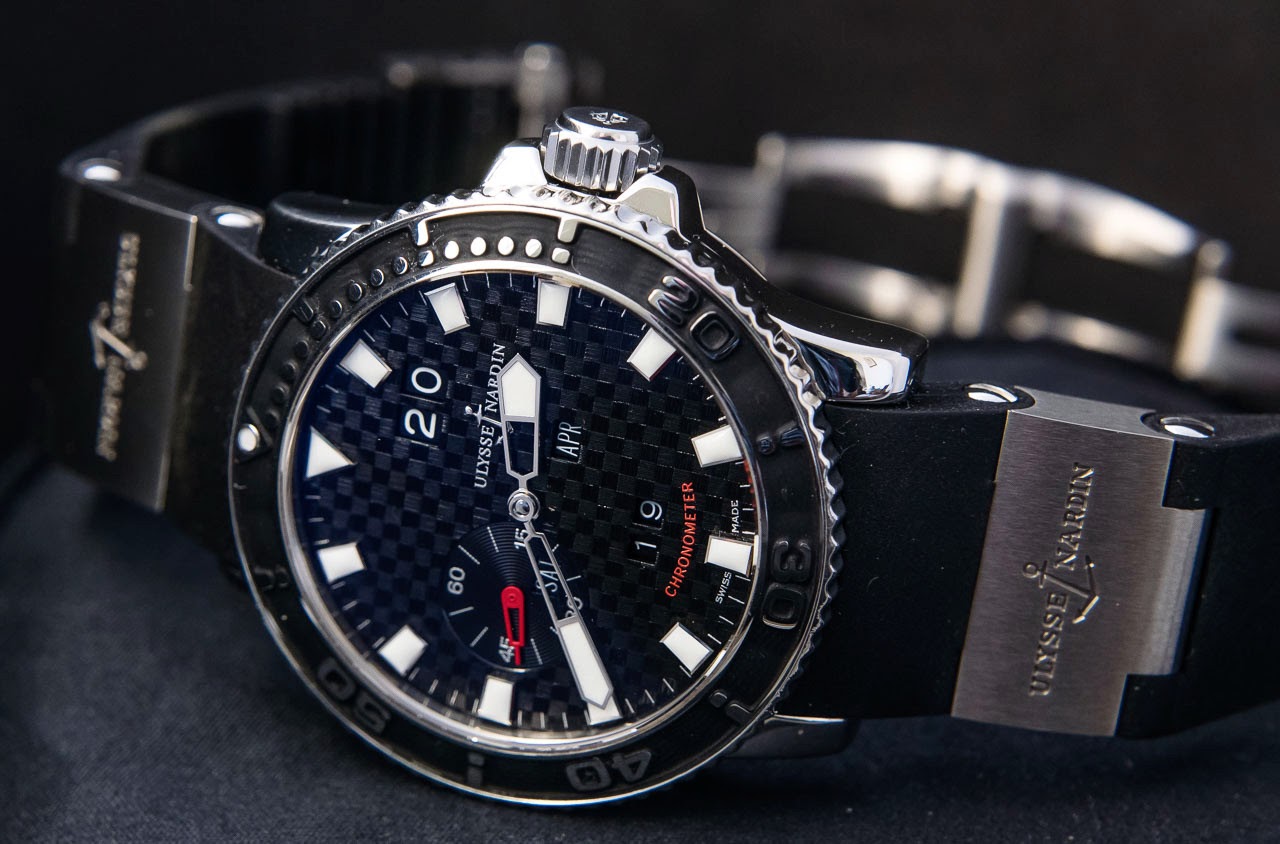 Acqua has his father's diving bezel, hands and markers, his strength, 300 meters water tightness rating and chronometric accuracy. His preferred style of clothing also replicates father's preferences: rubber and titanium. From his mother, however, Acqua received the most valuable gift: Within his sturdy shell of stainless steel beats a manufacture movement with a perpetual calendar. The best of both worlds. ... well, nearly so. One of Perpetuelle's atributes were barred from Acqua - the second timezone. Its two pushers would have compromised the sportive abilities, and - to be honest - Perpy had never used it, so noone thought it amiss.
The Diver became the best of fathers for Acqua, teaching his son to swim ... eh ... to sink ... to shine at night and to be accurate. Here we see the proud father aside his Acqua: 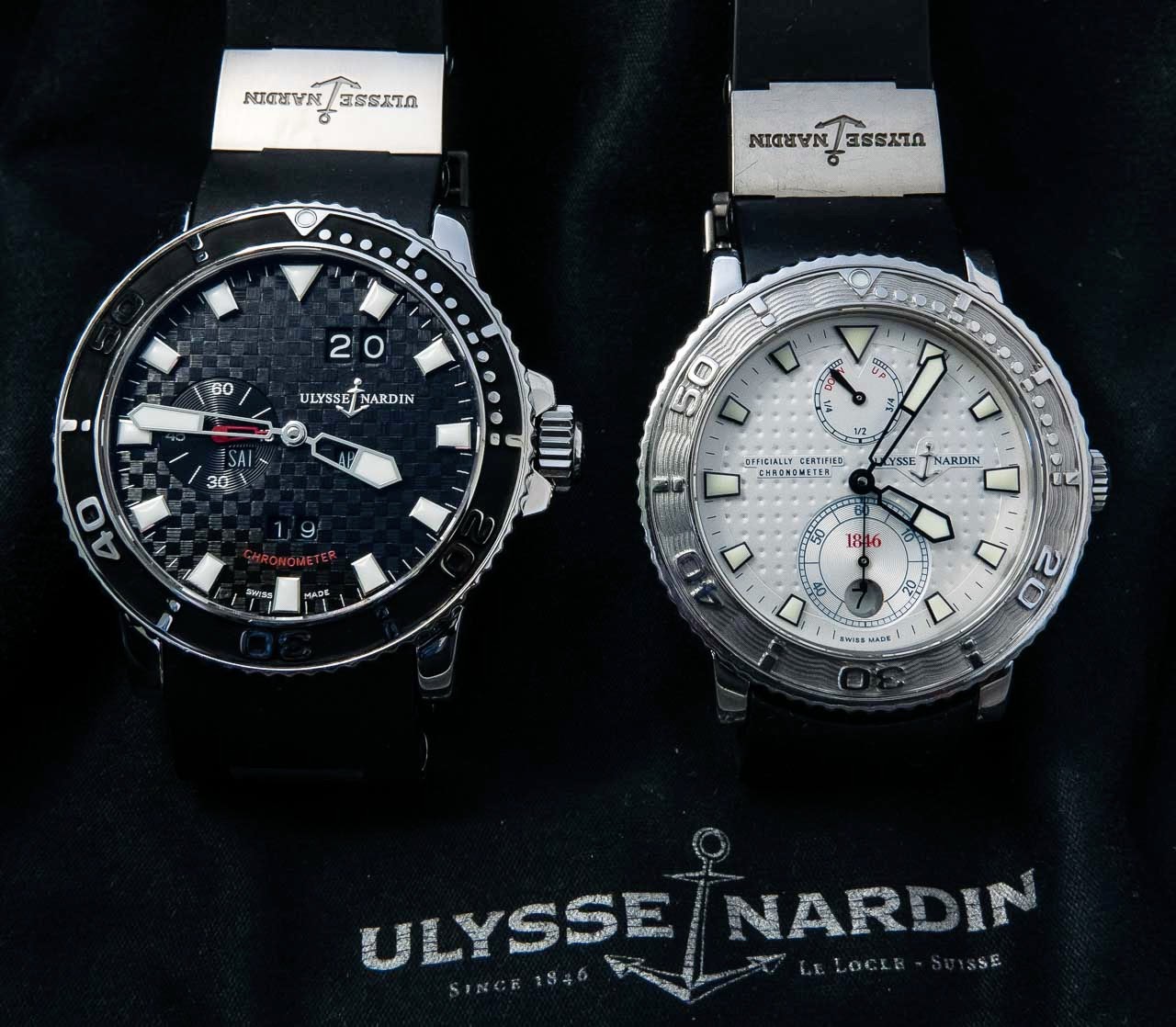 Finally, the rest of the Ulysse Nardin family got over the shock and accepted what they had previously considered a freak (well, shortly thereafter, the family really had a freak in the house, but that's a different story!). Only the Comte de Sonnerie was heard murmuring: "Impossible, a scandal. Steel! dingding!"
So we end this story with a happy end and another portrait of the happy family: 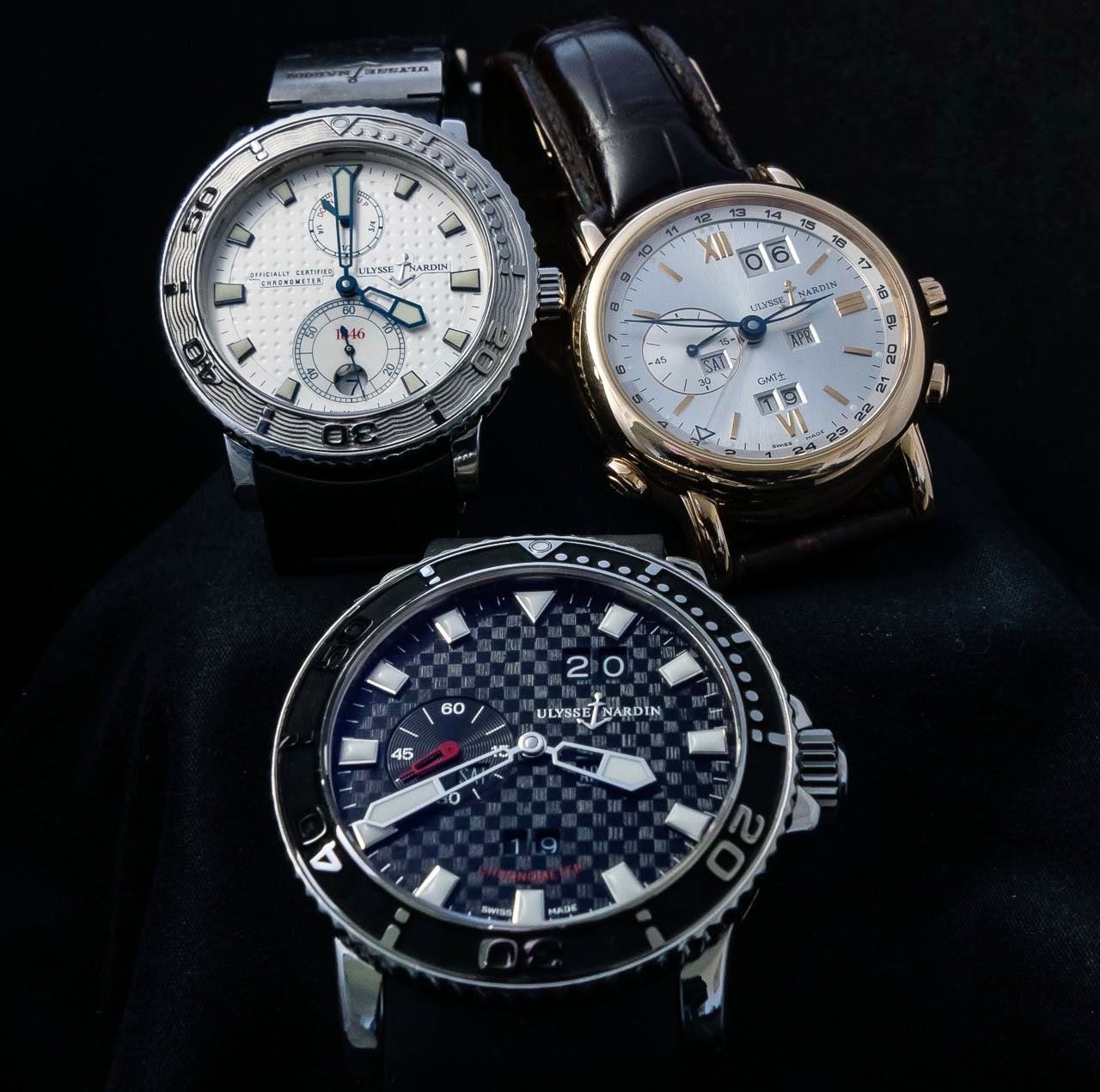 Marcus
"Eh, honey! Have you by chance noticed that our son has a black face? But we both have white dials. Do you have any explanation for that??"
---- "Oh, dear! That's only a matter of light reflection. *stammer* And age. *gulp* Just like the Lippizaner horses. When they are young, they are also black, and become white later ... much later ... uh."

A family shot - and the story behind

By: Marcus Hanke : April 20th, 2019-10:48
What we see here is a proud family of the House of Ulysse Nardin. Dad, Mom, and the young heir and successor to the throne. As is so often the case, the youngster has outgrown both his parents. However, before this happy end was possible, some obstacles w...
login to reply

It had to end this way. ;) Superb tale with a happy end. Nice family, Marcus. And where is the Astronomical one? [nt]

Granpa didn't want to be on the photo -nt [nt]

By: Tim Jackson : April 20th, 2019-11:13
That rare Acqua Perp is one of my fav. UN's of all time. The bracelet fits the case diameter so much better than it's better known sibling the Marine, even though I love that Blue lacquer of the Marine Perpetual. The Marine Perp. unfortunately uses the sa...
login to reply

Indeed the bracelet is wider

By: Marcus Hanke : April 20th, 2019-12:18
For the original 40mm Diver, the bracelet is 20mm at the lugs and 18mm at the clasp. The Marine perpetual has the bracelet of the Maxi Diver (or vice versa, since the Maxi Diver came out after the Marine Perpetual), which is 22-20mm. Marcus EDIT: Just loo...
login to reply

Congratulations on the latest addition to the family, Marcus 👌🏻 [nt]

Only such a fairy tale could be created from UN. (nt)

By: Zebda : April 30th, 2019-03:23
I was in charge of all this Development in relation with Rolf the boss, with M.Brenni the Designer. Great moment of emotion and all of this models still continue to be nice. Thanks Marcus
login to reply

That must have been a top moment. If you have anecdotes to share, and if you are allowed to do so, please feel free to share them. [nt]

I had the joy to spend some hours with Mr. Brenni ...

By: Marcus Hanke : May 1st, 2019-04:45
... during a flight back from Moscow. It was a great time discussing his thoughts and designs! I am still a big fan of UN designs, but sometimes I think they feel pressed to introduce changes in otherwise timeless designs, only to show that there is somet...
login to reply