By: foversta : February 2nd, 2020-13:55
It's come full circle. Panerai has just unveiled its twelfth watch dedicated to Chinese zodiac signs with the one celebrating the year of the rat. And of course, this watch is based on the same recipe used previously, namely a steel Luminor 44mm base, powered by an automatic P9010 caliber with a 3-day power reserve and released in a Sealand context, i.e. with a lid hinged at 12 o'clock.

I am not an absolute fan of watches dedicated to astrological signs because their interpretation by the Swiss watch industry is generally very dusty and outdated with small painted or sculpted beasts on "craft" dials around themes that have hardly evolved for decades. And then there is Panerai with its approach of engraving the lid using the sparsello technique. The incisions made with a small scalpel are then inlaid with gold threads which give the pattern a more refined appearance without it appearing too precious. 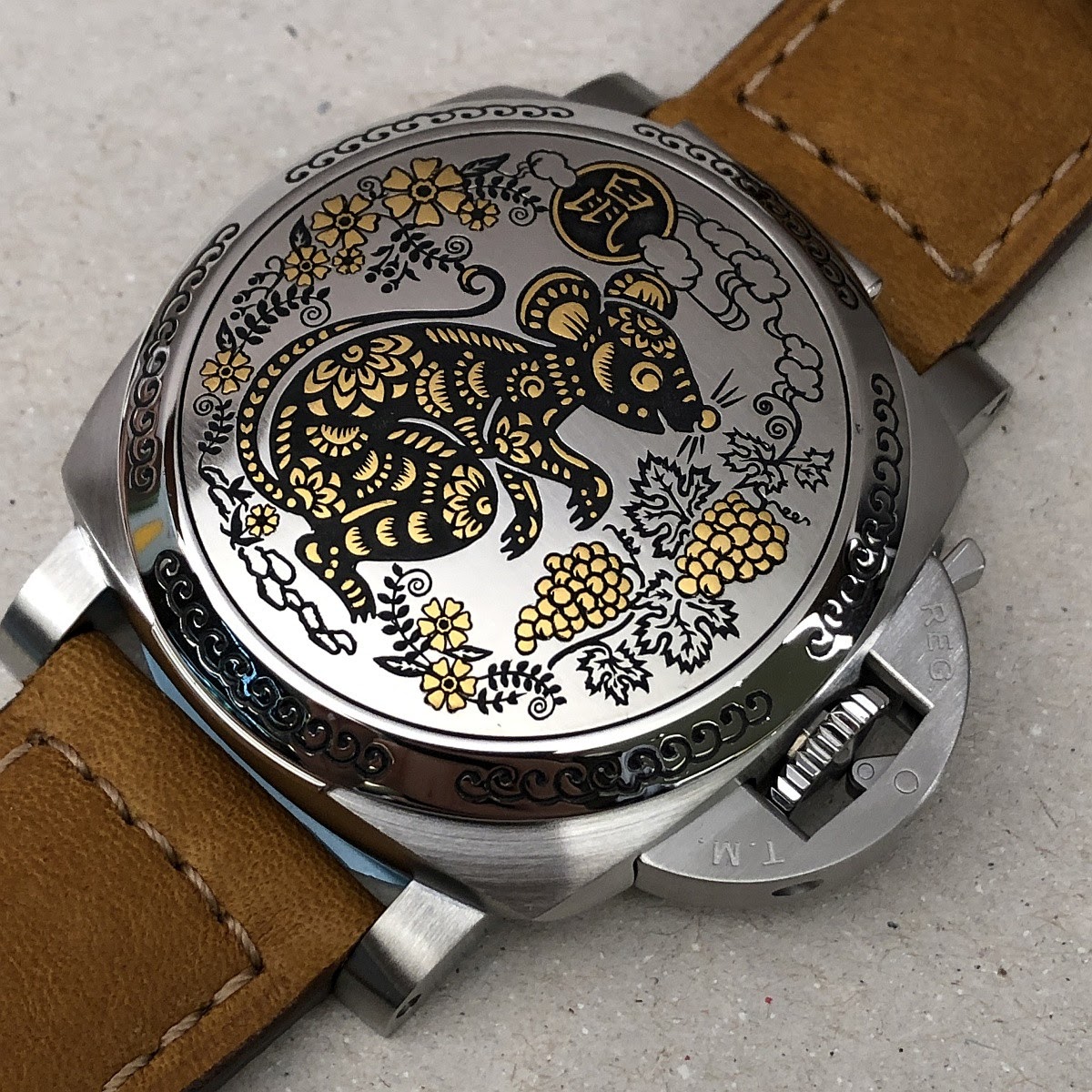 The pattern itself, whatever the sign object of the watch, has always been carefully designed by Panerai. The animal is well symbolized and represented but there is always a casual style, as if the brand didn't take itself too seriously. In any case, I really like the rendering because I find it more contemporary than many others I see elsewhere and especially adapted to the context of the watch. We are after all at Panerai, with a Luminor with its crown guard, and the exercise that consisted in bringing these different worlds together was not easy. 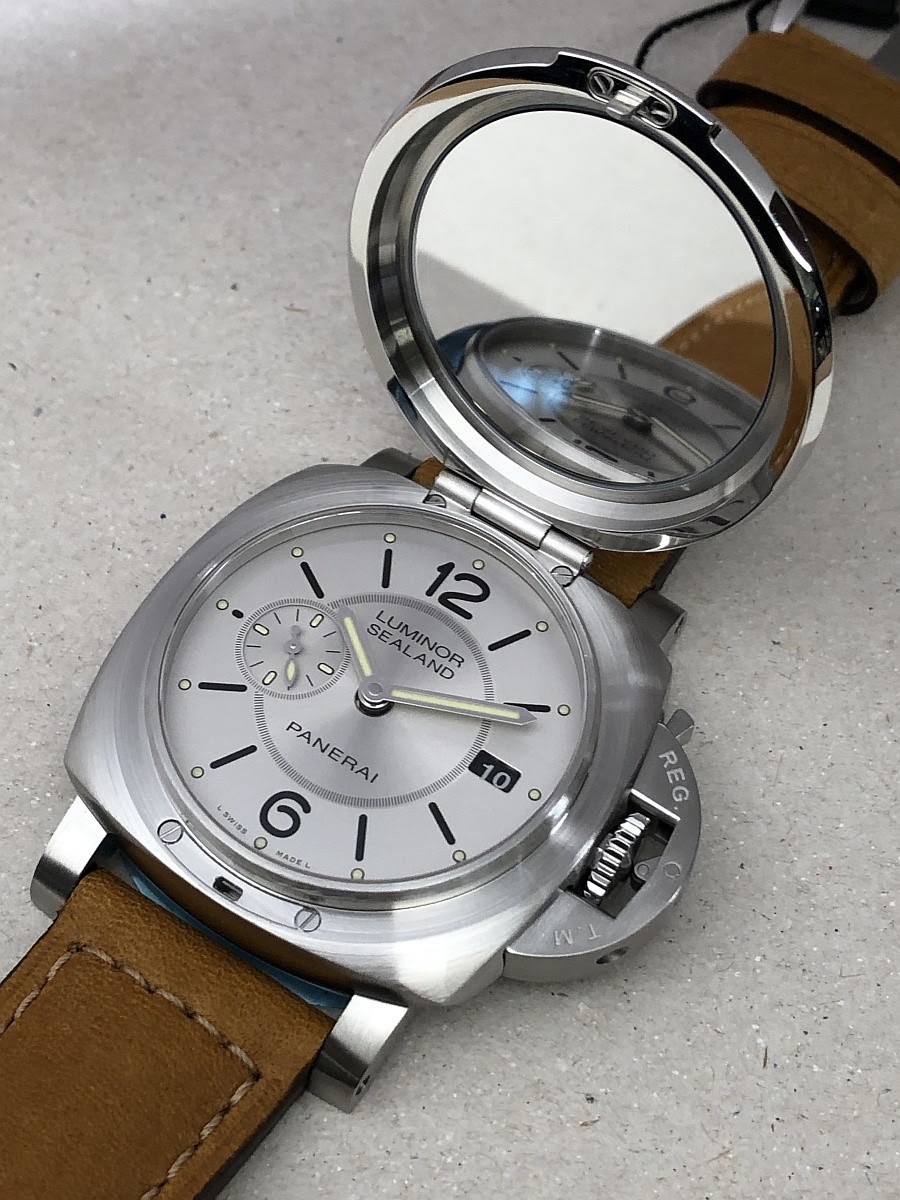 The Luminor Sealand Year of the Rat is no exception to the rule. The animal is smiling, seems mischievous and one can almost imagine it rejoicing at its future feast represented by the bunches of grapes. In any case, these bunches as well as the flowers bring a lot of light to the dial and create beautiful golden reflections. I also like the concept of having to lift the lid to read the time and the need to make a precise gesture reminds me of pocket watches.

The dial of the watch is, as always, predominantly silvery grey but it no longer has a magnifying glass as it had in the early years of this series. I prefer this choice, the dial appears purer. Note that the date disc is black. 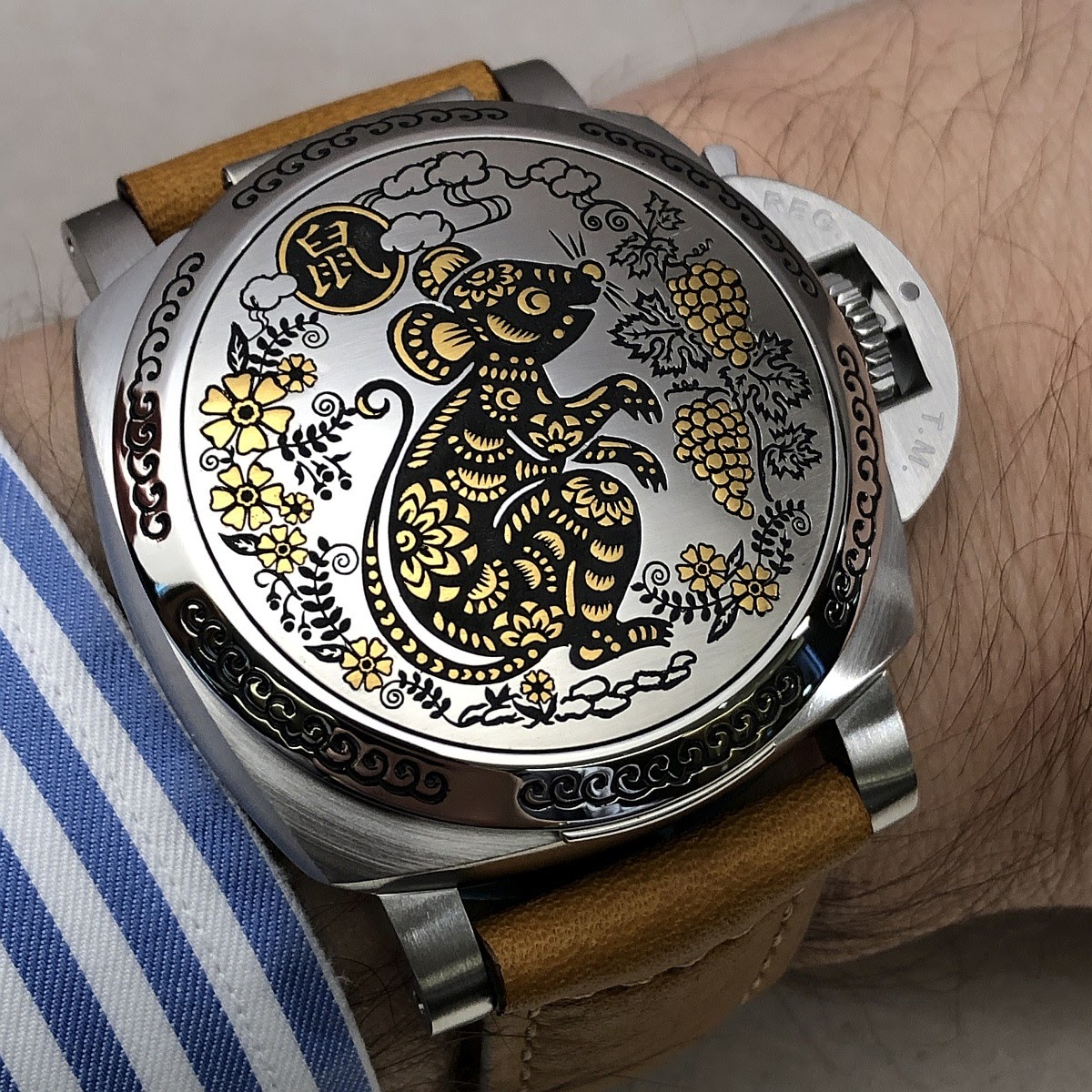 Of course, this kind of watch is for a very particular customers segment. But it is nevertheless very well made and I would imagine myself without any problem wearing the one dedicated to the year of the rooster which is my sign from the Chinese zodiac. The question I ask myself from now on is to know what Panerai will do next. Will a new series be launched? I guess so, considering the weight of the Chinese clientele. With another style? In any case it will be difficult to do better than the series that is coming to an end. The use of the lid has always seemed to me to be a wise choice. The Luminor Sealand Year of the Rat is being sold in a limited series of 88 pieces at a price of around 23,000 euros including VAT.
Fr.Xavier

By: Weems@8 : February 2nd, 2020-15:03
The chinese zodiac watches from the oldest watchmaker are, what would i say. Very expensive.

So if my sign is coming by, and the prices are not absurt
i would consider to buy.
My sign is a bit of an economic mind, and weights if something useful.
No profit, my interest is switching to things who deliver me the succes i want to accomplish.

By: sergio : February 3rd, 2020-08:59
the Mexican and Peruvian markets are not very important. Can you imagine what they could come up with, drawing inspiration from the Aztec and Mayan calendars? lollll
login to reply

By: renerod : February 9th, 2020-13:08
Prehispanic Mexica and Mayan writing had hundreds of glyphs!

Don’t give them ideas 😁

At least they have not come out with a catrina Panerai.